Set at the base of some seven giant volcanoes (most of them dormant… but not all) that more than tower over everything else, Kisoro’s a beautiful sight. Climb up the hill to the north and you get an expansive view of Lake Mutanda, another crater lake, and even some volcanoes situated in Rwanda and DR Congo, both of whose borders are a mere 12 km away. The town itself — small and relatively benign — is a stepping stone for both those countries. So why did I stay for three days?

Oh, quick aside before I get there: nothing like crashing the shooting of a church choir’s music video, overlooking views of Kisoro, the lakes, and the volcanoes. It was a good place to avoid the onslaught of election rallies and endless news reports of a mostly peaceful but highly-suspect election with constantly-harassed and constantly-arrested opposition candidates, opposition voters largely resigned rather than angry about another five years of Museveni. (People seemed more angry about the unprecedented social media and mobile-money block for four whole days, under the guise of “national security”.) 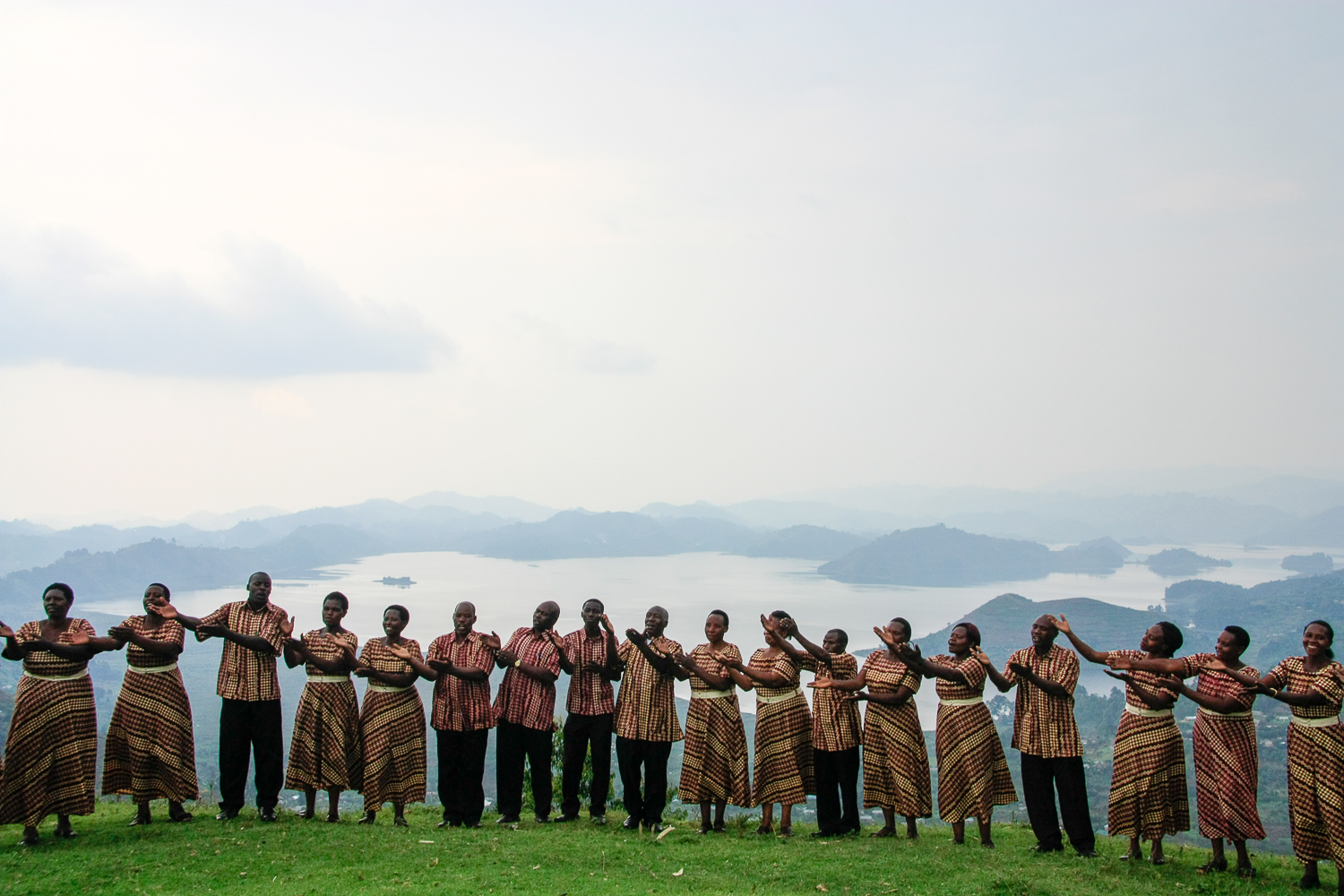 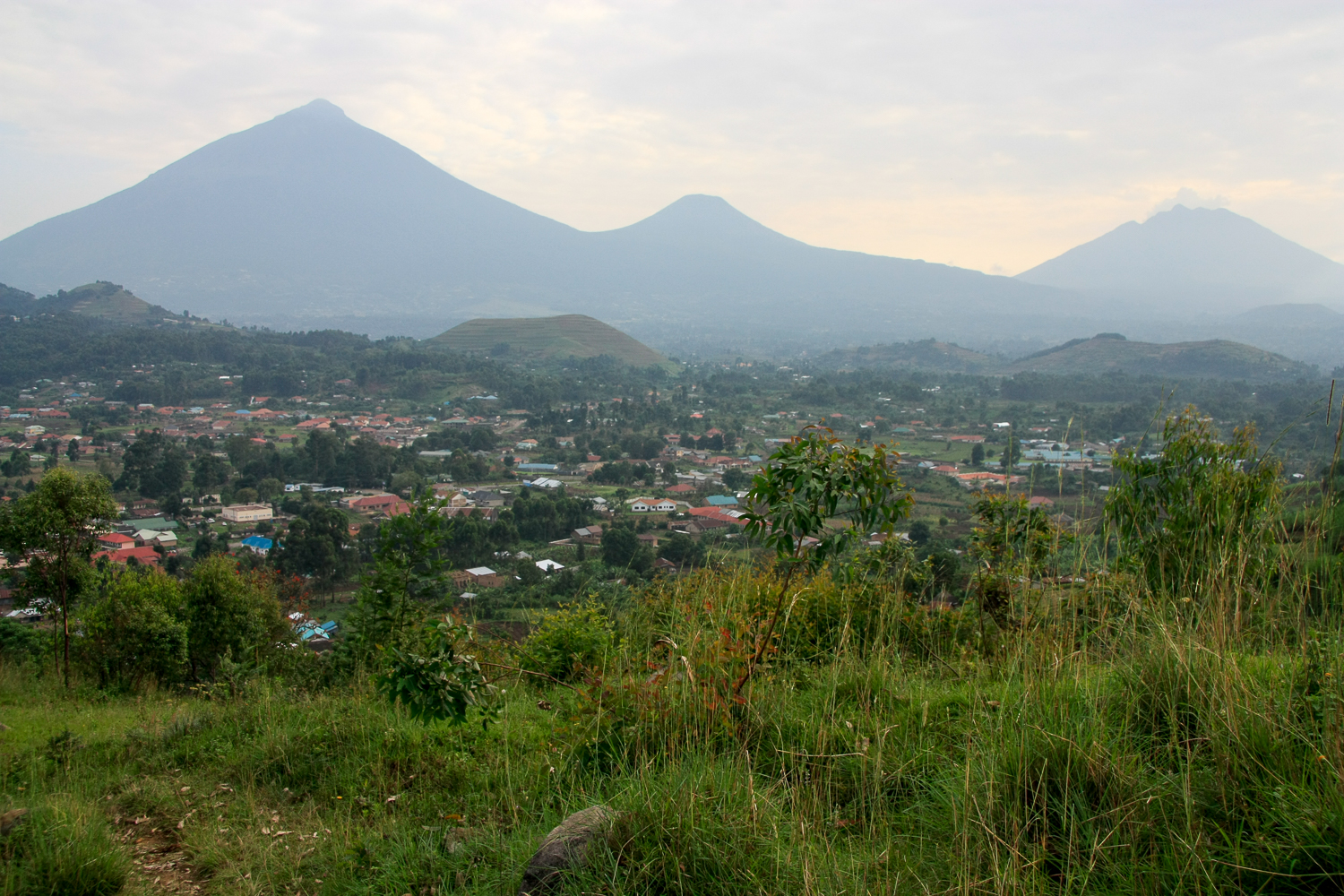 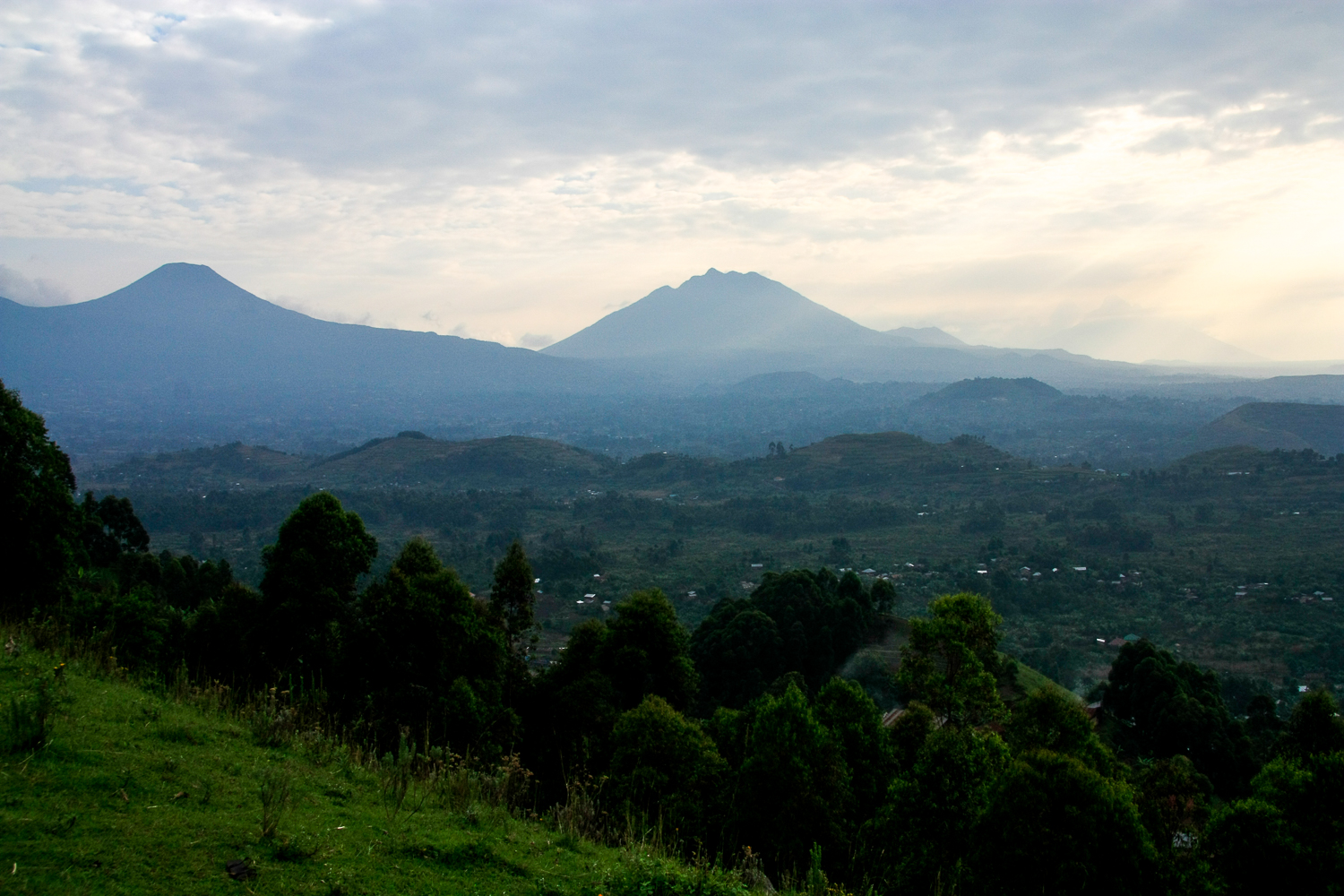 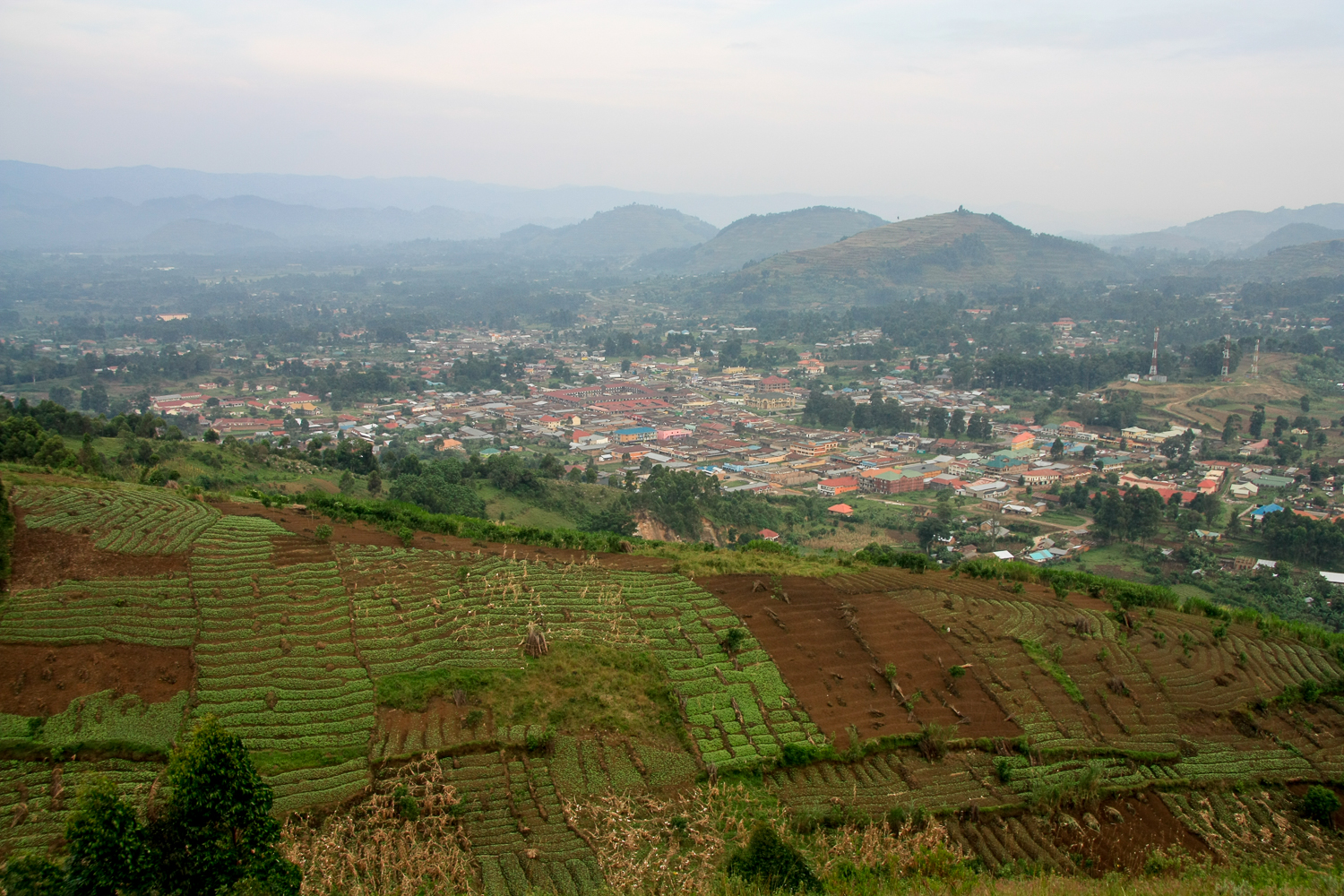 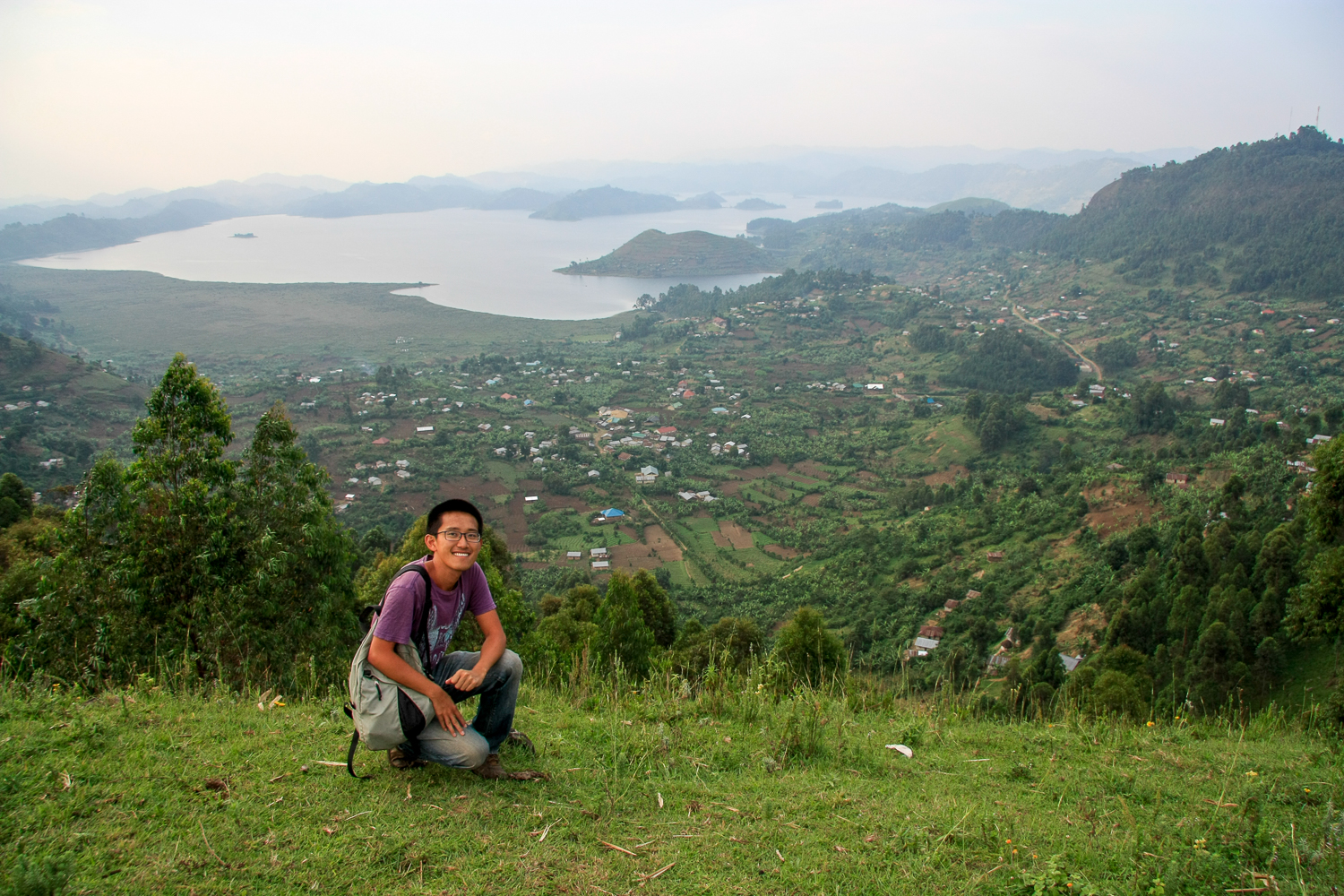 Now back to the gorillas. Full disclosure — this is easily the most money I’ve ever spent in a day, for what is essentially a half-day activity where you spend about an hour with a gorilla family after you find them. It’s a big-ticket item ($600) that I originally thought I was going to pass on, but after receiving nothing but enthusiastic persuasion from everyone I met who had done it, I decided to make the jump. Even though I was able to afford it, the decision didn’t come easy. Would it be worth it?

Mountain gorillas share 97% of their DNA with humans (chimpanzees share 98%) and are highly endangered, with only about 700 left in the world, spread primarily in the Virunga mountain/volcano range split in a small triangle between Uganda, Rwanda, and DR Congo. I joined several other trackers early in the morning at Mgahinga Gorilla National Park, home to one habituated (wild, but used to and unafraid of human presence) gorilla family of 10 named the Nyakagezi group. We set off into the forest, first along what looked like a well-maintained trail path, but soon veered off into anything that looked like an impression on the ground. Our guide was radioing the official park trackers, who set off a few hours before us to find the gorillas’ current location, and so we followed, walking straight through branches, thorns, and anything that looked like an impression on the ground.

Sure enough, we reached a small “clearing” where we were told the gorillas were the day before. They just bulldoze their way through anywhere they want, I guess.

After about one hour, we heard more commotion, and a “bop-bop-bop-bop-bop” sound not unlike the sound you get when you slap your cheeks with your mouth open. Huh. Wonder what that was. The park trackers had found the gorillas, and we caught a glimpse of two silverbacks crossing a path well behind us. I was not prepared to see something this huge! Our guide and trackers began grunting and barking, emulating gorilla sounds that were never explained to us but were clearly distinct, trying to see if they could hear any responses.

In any case, it started to pour, and we also noticed lots of buffalo poop on the ground — both were bad signs for us, since gorillas like to hide from the rain and they also get agitated by the presence of forest buffalos. In other words, the gorillas wouldn’t stop moving. We continued towards where we saw the crossing gorillas, but since they’re well-adapted to the terrain, they were much faster and much further ahead. All of a sudden, our guide told us to turn around — there was an enormous young silverback gorilla directly behind me. How he managed to follow us without me hearing or noticing is completely beyond me, but I was momentarily amazed, then terrified, then amazed again. He just sat there, saw us, and ignored us, before proceeding on his way where the rest of his family actually was. After waiting a minute so as not to get too close, we followed.

We followed this young silverback, named Rukundo, in the pouring rain for close to an hour, barely getting glimpses of the rest of the family. From time to time, he would stop and sit directly in front of us, eating everything in sight, then walk *right* in between our group, all the while completely ignoring our presence. At many times, we were so close that I could have easily reached out my hand and touched him, and I could clearly see his breath in the air. That was surreal. (So much for the 7-metre rule.) He broke a large tree branch with one arm, unintentionally bringing it down nearly on top of us, before scurrying off too fast for us to follow. 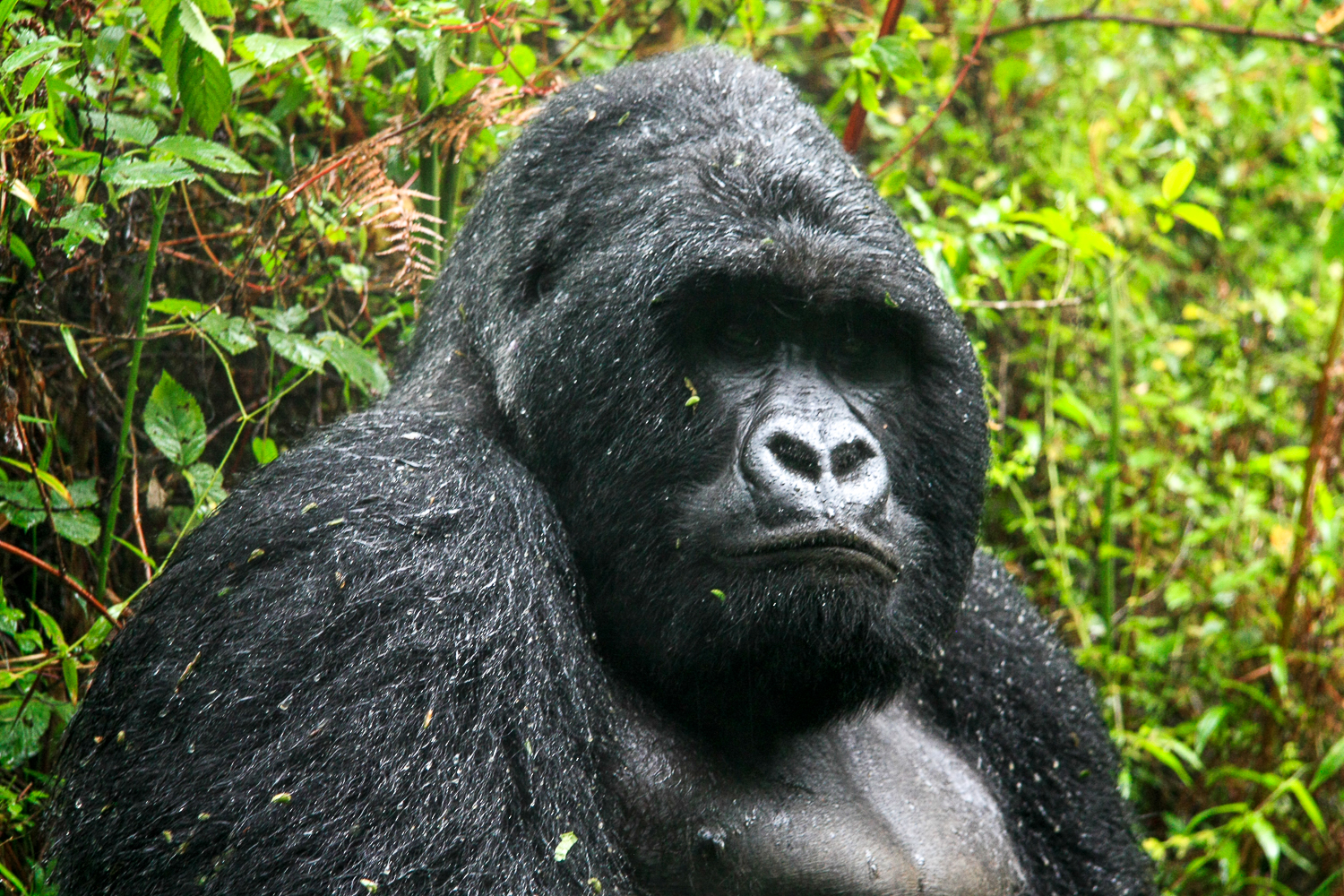 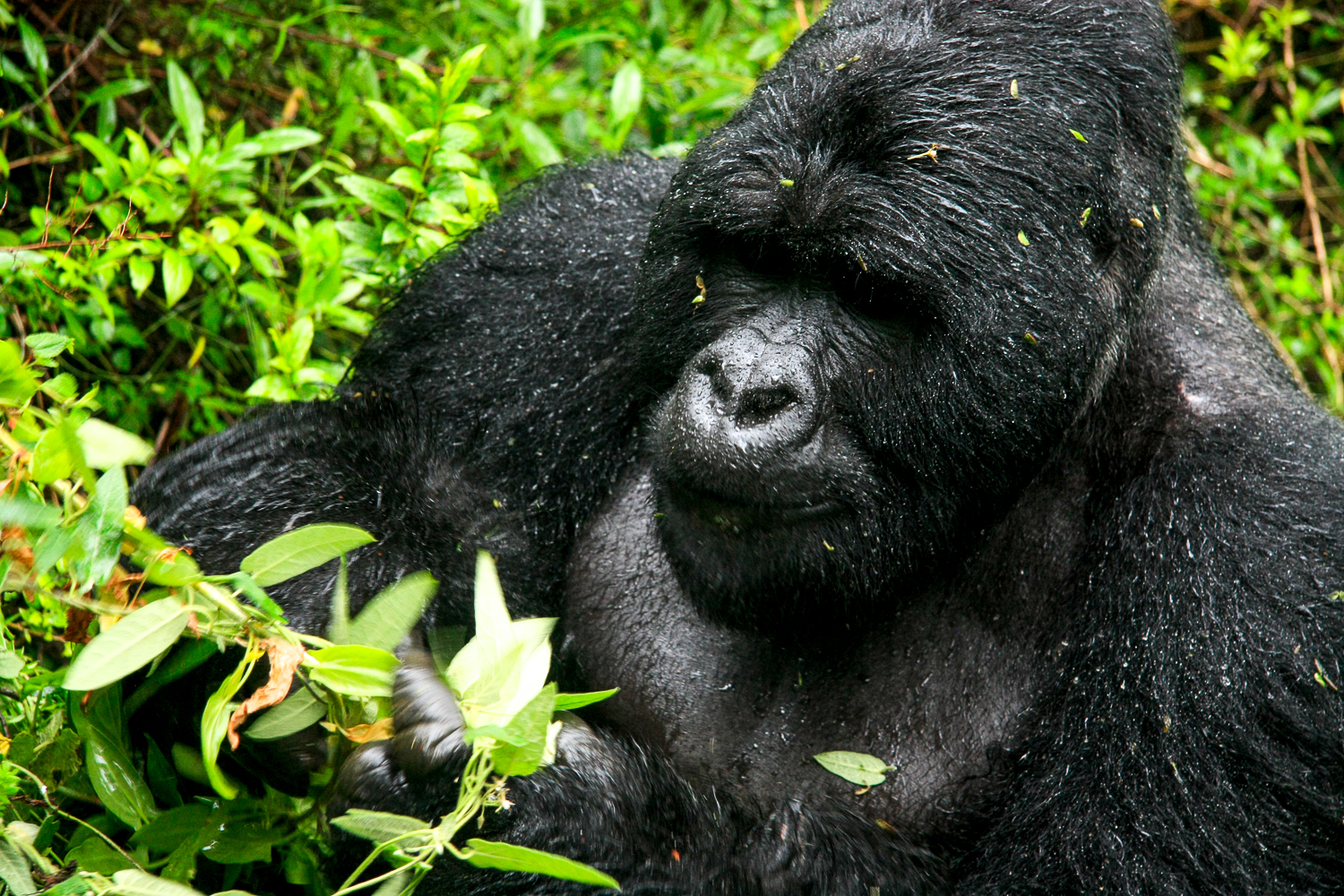 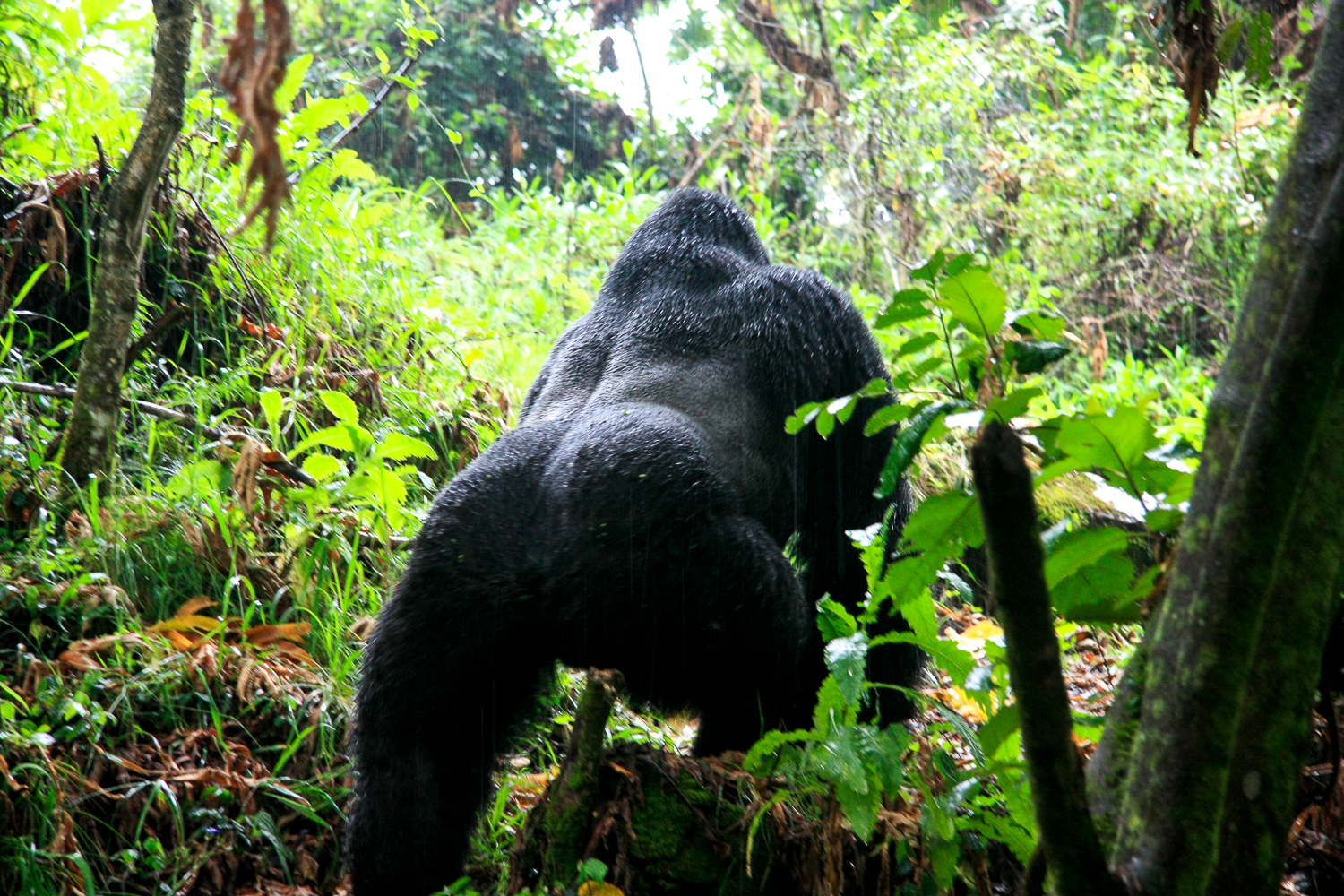 With the heavy rain and the gorillas still agitated from the buffalos, we decided to return to base to eat and wait for awhile, making an agreement with our guide for an additional half hour due to the infrequent glimpses of just one gorilla that we had for the past hour. After the rain had subsided, we resumed tracking, finding the gorillas a mere five minutes’ walk away. Lo and behold, eight of the 10 members were present and finally calmed down — five silverbacks (adult males, who develop silver fur on their backs around 16 years old) ranging from a 16-year-old to a 44-year-old, one female nursing a baby, and one young juvenile who was climbing up a tree. Unfortunately, the rain and darkness made it too difficult to take clear photos, but it was an amazing moment to be in the midst of a family of gorillas going about their day — grooming each other, nursing, eating, relaxing, and of course, completely ignoring our presence unless we got within maybe a forearm’s length away. The largest silverback and leader of the family, Mark, was absolutely enormous and probably something like 200 kg — I would not ever want to see him charging at me! 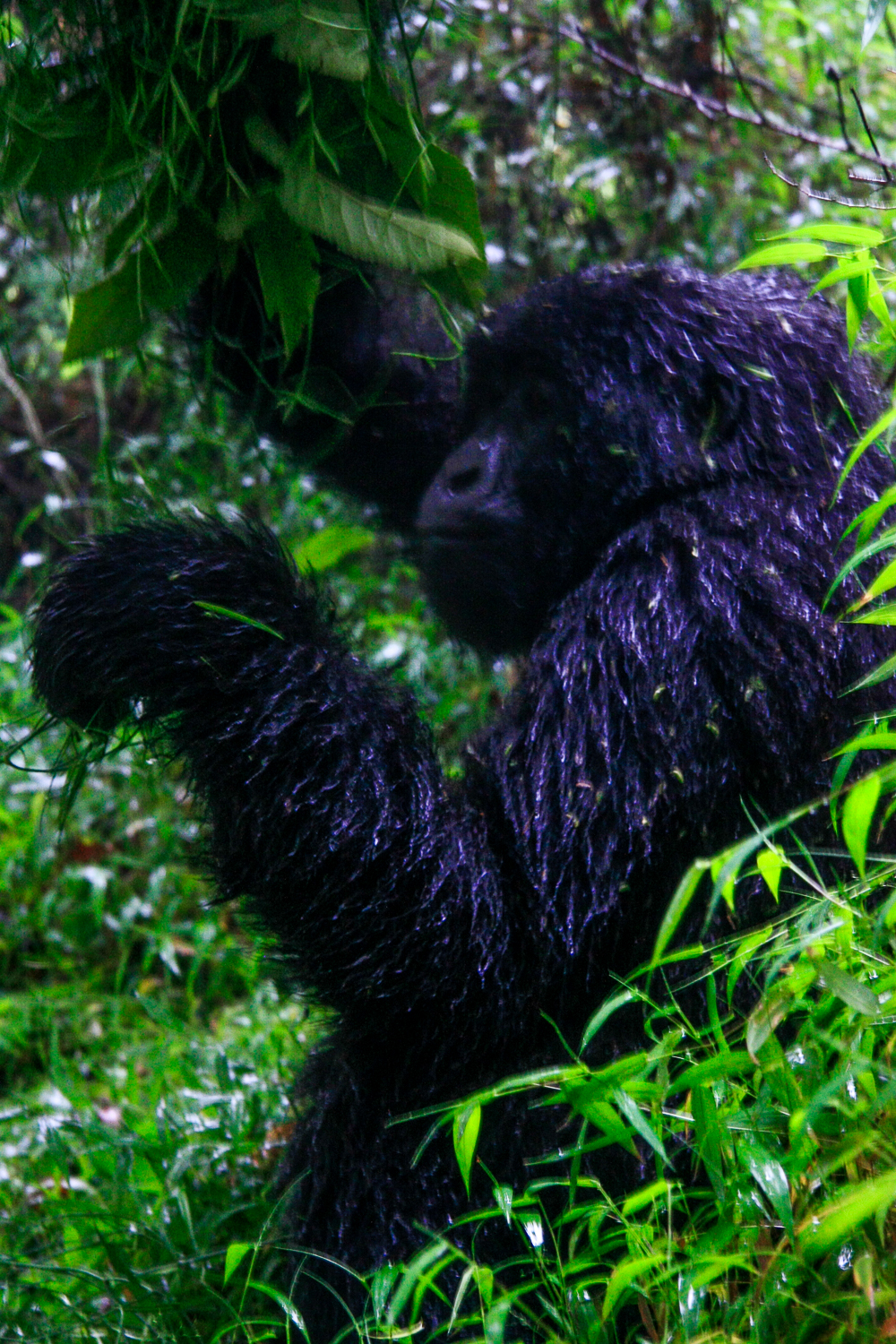 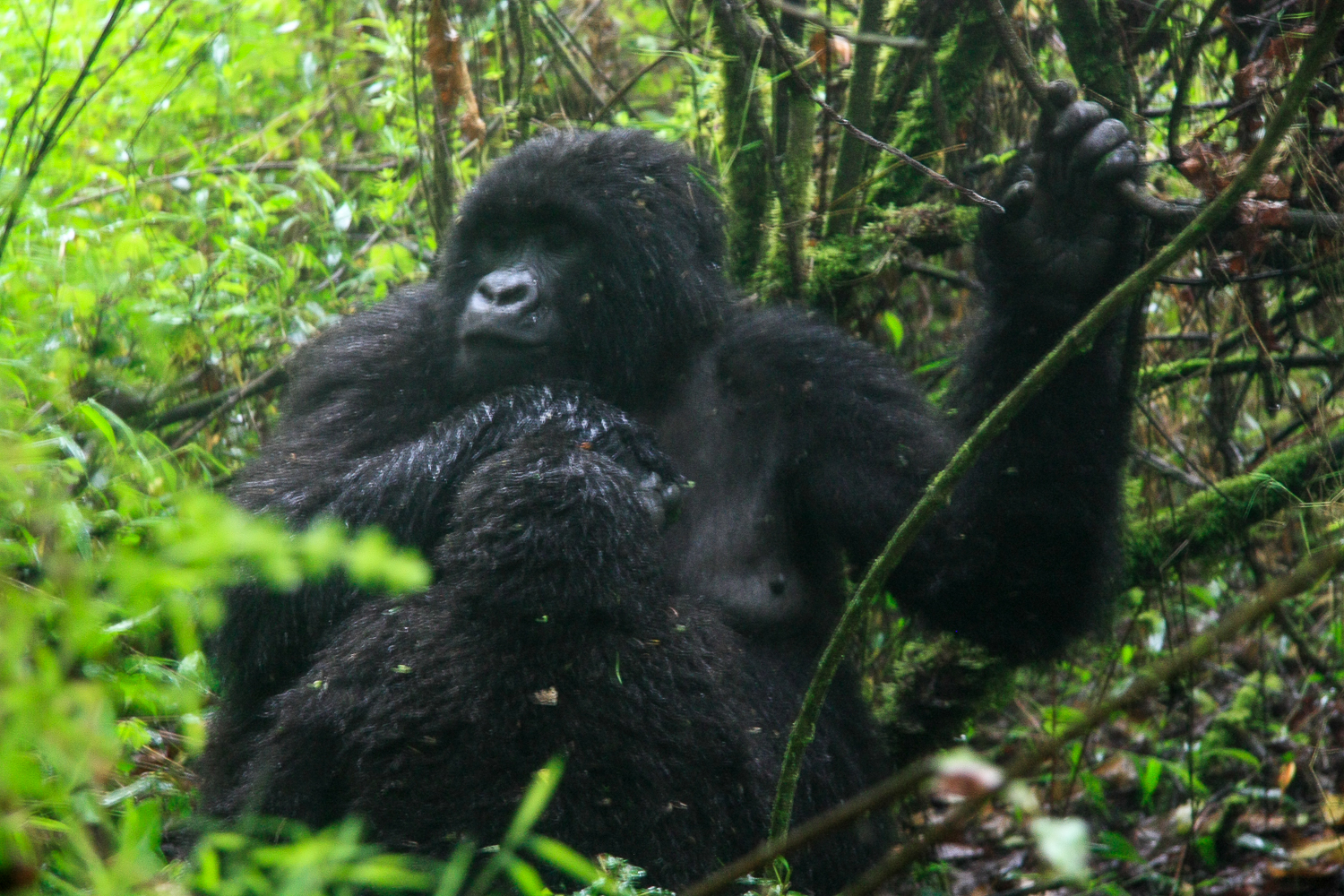 One of the silverbacks, Ndungutse, sat directly in our path. We decided to just take photos with him, although he soon decided momentarily to lie down, butt facing us, and release a very, very long fart. Heh. He then proceeded to pick his toes, scratch himself, and let out a huge yawn, baring some serious fangs, before rising up to beat his chest — “bop-bop-bop-bop-bop” — and run away. So that’s what the sound was, but given how built all the silverbacks are, it’s strange that it sounds so hollow rather than thumping. 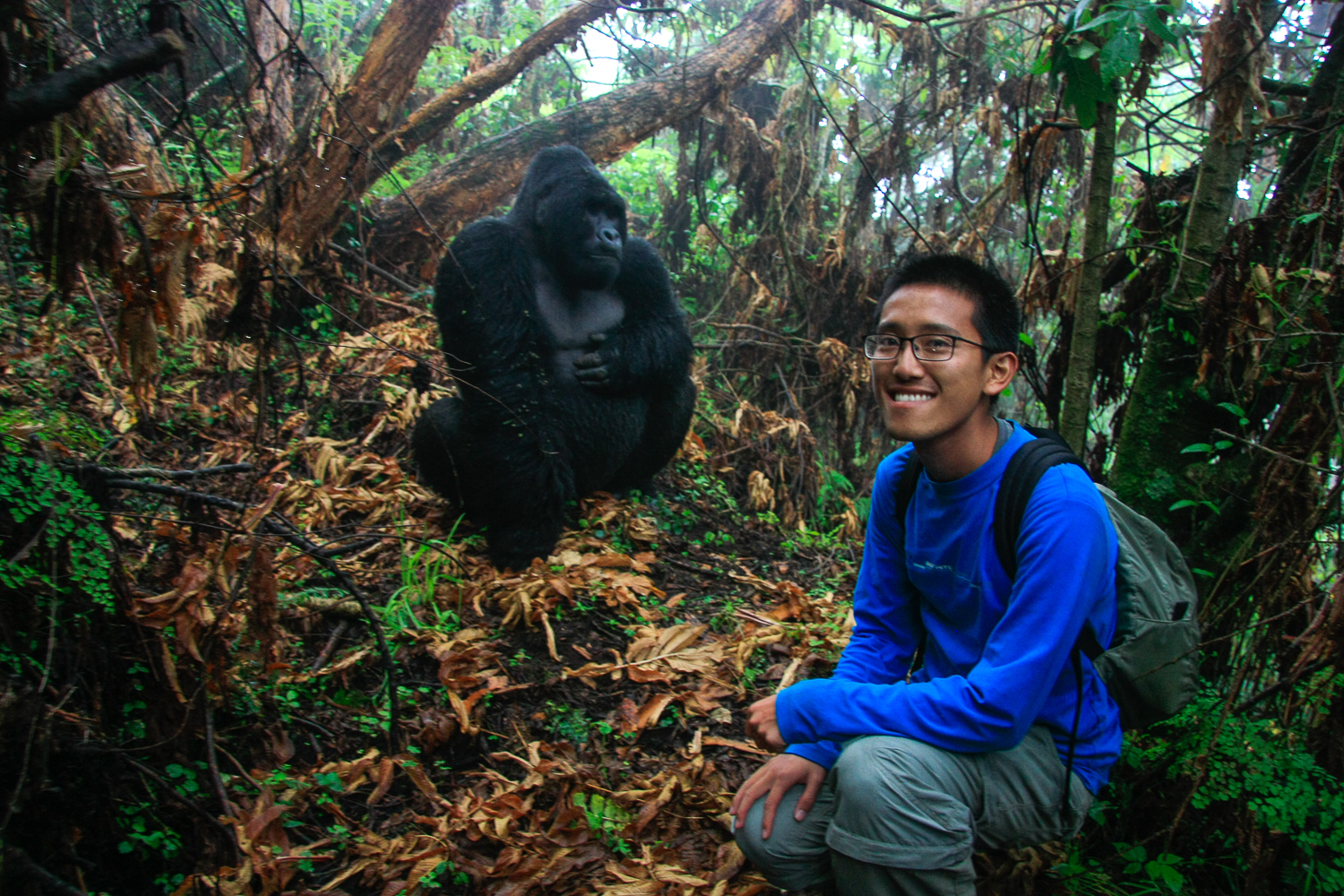 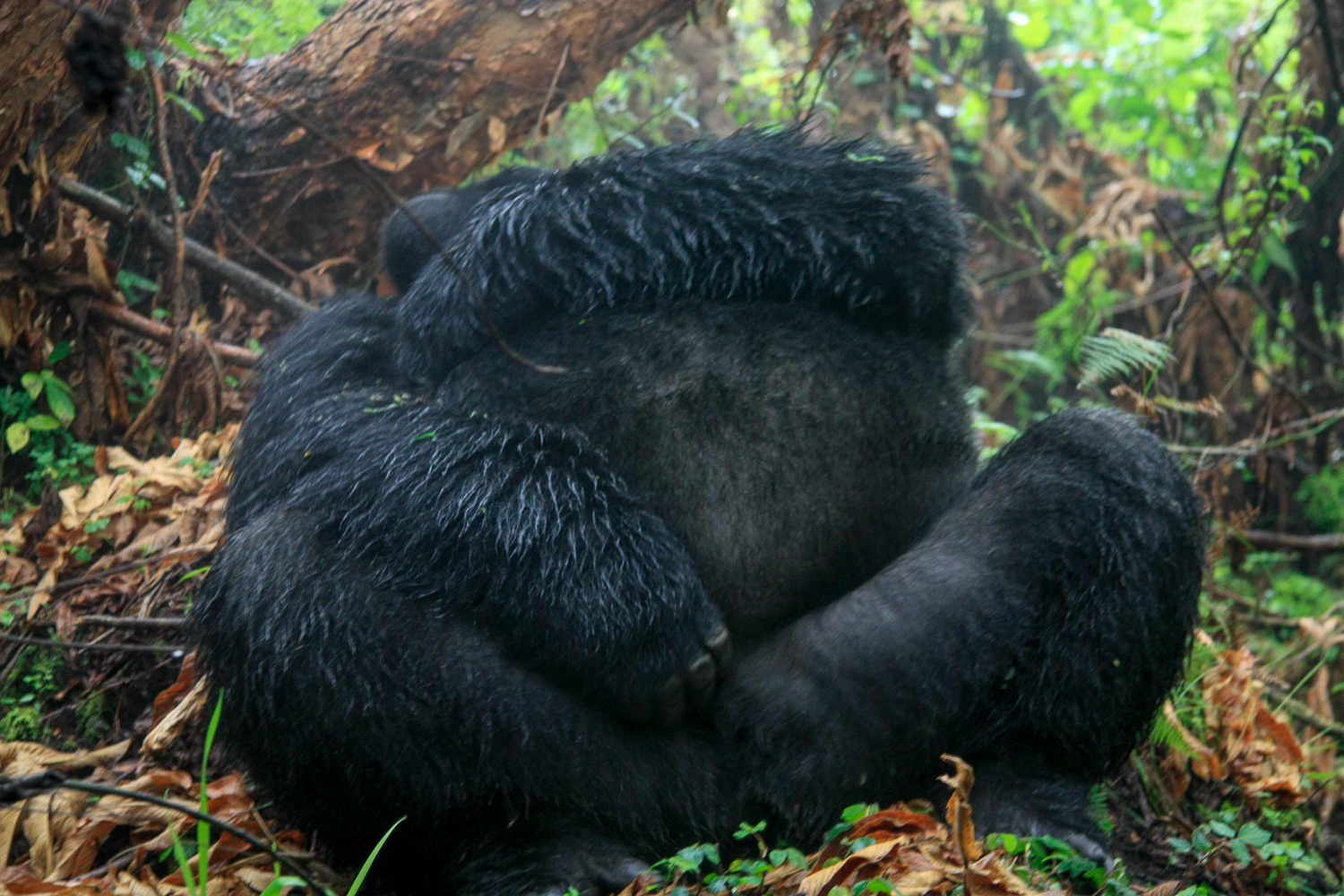 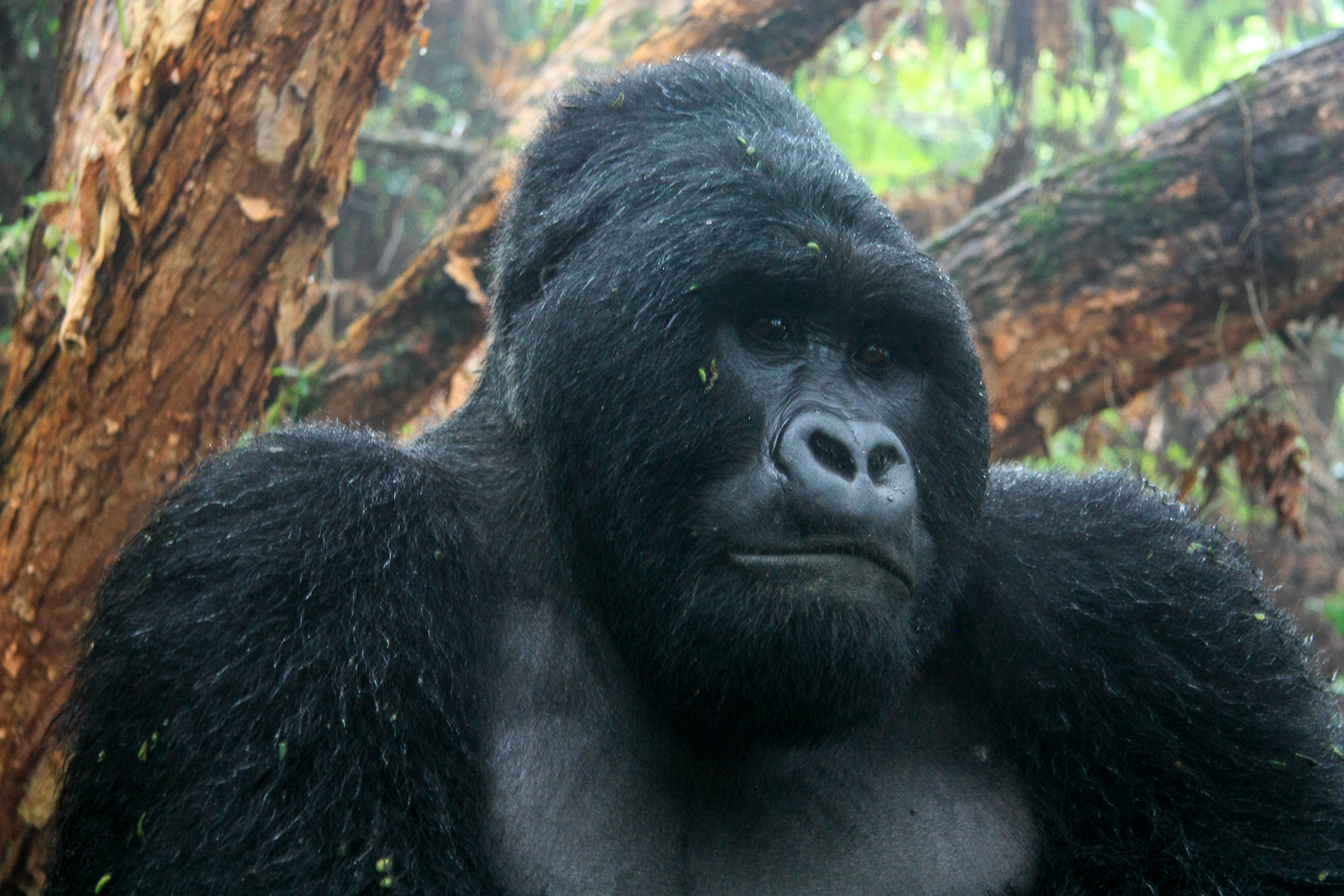 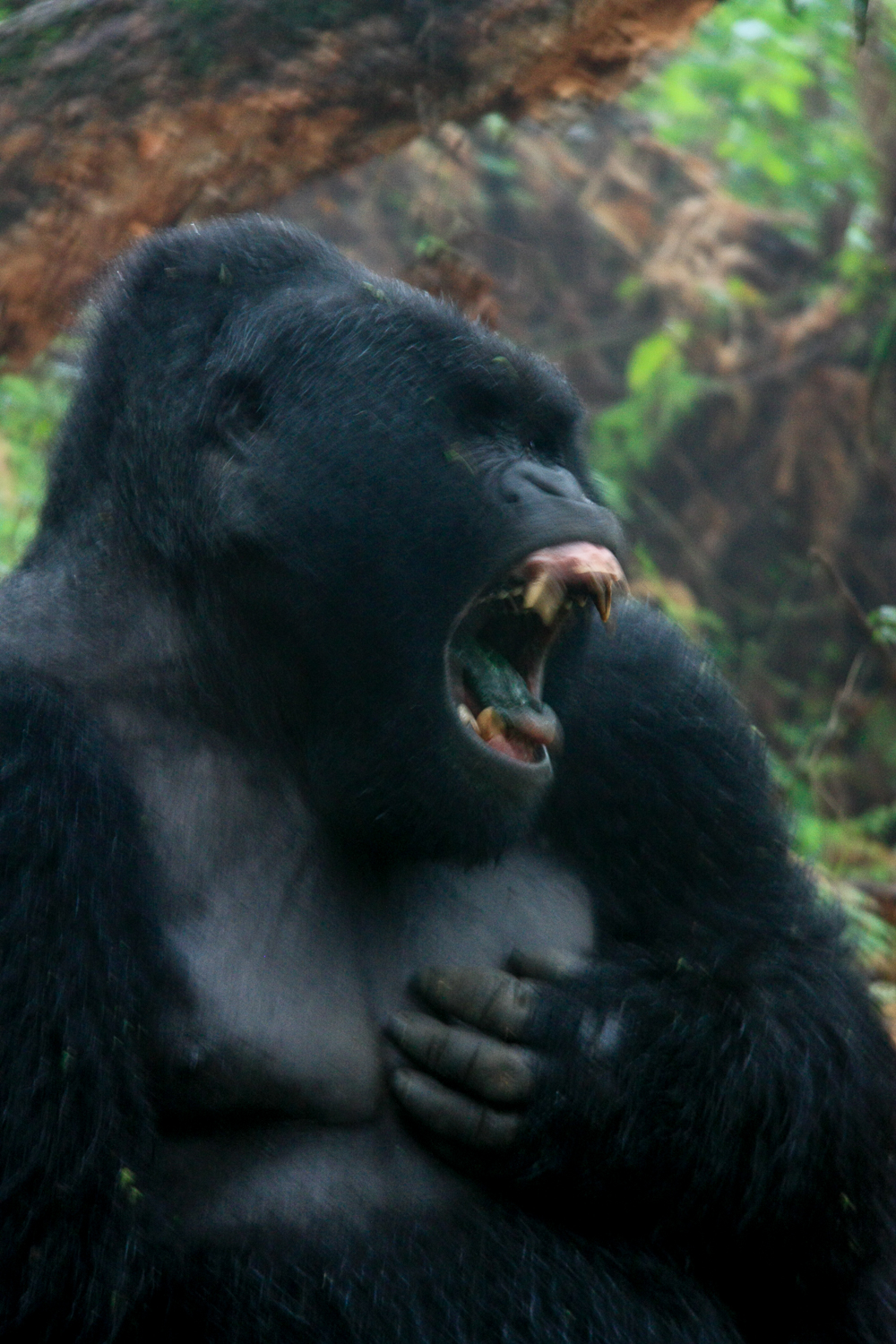 Some twenty minutes later, the entire family of gorillas ran into the thick forest, where even with machetes to clear our way, we wouldn’t have been able to follow them. Our time was too short, and certainly felt that way! And with rain and the buffalo incident, nature certainly wasn’t kind or favourable for our experience, but such is nature — it does what it wants. Other groups I met had seen the gorillas stay still and relaxed for an hour, with the occasional curiously-approaching baby, rather than chasing a group around vainly in the rain. But on the plus side for us, the unusual conditions led us to walk directly in front of, behind, and around multiple silverbacks at arms’ length. Staring at them directly in the face is an intimidating, winsome, and humbling experience — an act of being acknowledged by these giant beasts that could easily tear you apart, but instead are just willing to have you in their presence.

Was it worth it? Hard to say, but I’m sure glad to have gone, or I would have forever wondered or regretted skipping it. Most certainly amazing and a once-in-a-lifetime (at least for me) experience.