Crossing the border from Uganda, the difference isn’t immediate but it’s soon apparent: this is a much more prosperous country. The poorest village homes I’ve seen all have corrugated steel sheet roofs instead of thatch, and the middle class have shingles. There are actual sidewalks in the cities. With few exceptions, there’s no litter around and the streets are pristine. Vehicles don’t look like they’re going to fall apart. Development seems visibly rapid. It also seems like a far more orderly country: all boda-boda drivers wear helmets and carry one for their passengers, many of the buses run on a schedule instead of when full, and traffic is a smidgeon less dangerous and speedy.

The order can get a little bit ridiculous though. In Kibuye, a town with wide roads and relatively little traffic, there seems to be even a bit of overregulation — traffic only goes one way. And in the whole country, it seems like every notable town except Kigali has been renamed, with both names commonly used and a frequent source of confusion for visitors. There are now three official languages: Kinyarwanda, French, and the recently-added English, in order of prominence, along with some who speak Swahili. Other than Kinyarwanda, it’s a complete tossup as to what any given person speaks or understands. I feel obligated to start every interaction the way airport workers in Canada do, in hopes of being understood: “Hello/bonjour!” — and sometimes even that doesn’t work. (But hilariously, it seems like practically everyone knows “ni hao”, even in rural areas, and at least four people have greeted me with some sage-like fist-in-hand bow that they probably saw in a kung-fu movie. A high school-aged girl also completely schooled me in a conversation in Mandarin, which she initiated.)

Life moves normally. And normally, I wouldn’t give that a second glance. But this is Rwanda, and with its notorious recent history, I can’t help but look at everything with… well, what’s the opposite of rose-coloured glasses?

The streets are full of young people, maybe… mid-20s at most? Is that a demographic issue like Uganda’s world-youngest population, or…?

There’s a person on crutches, missing a leg. And that person’s got a wonky eye. This one’s got missing fingers. Is that…? Wait, too young? No… but I’ve seen people in other countries like that too… 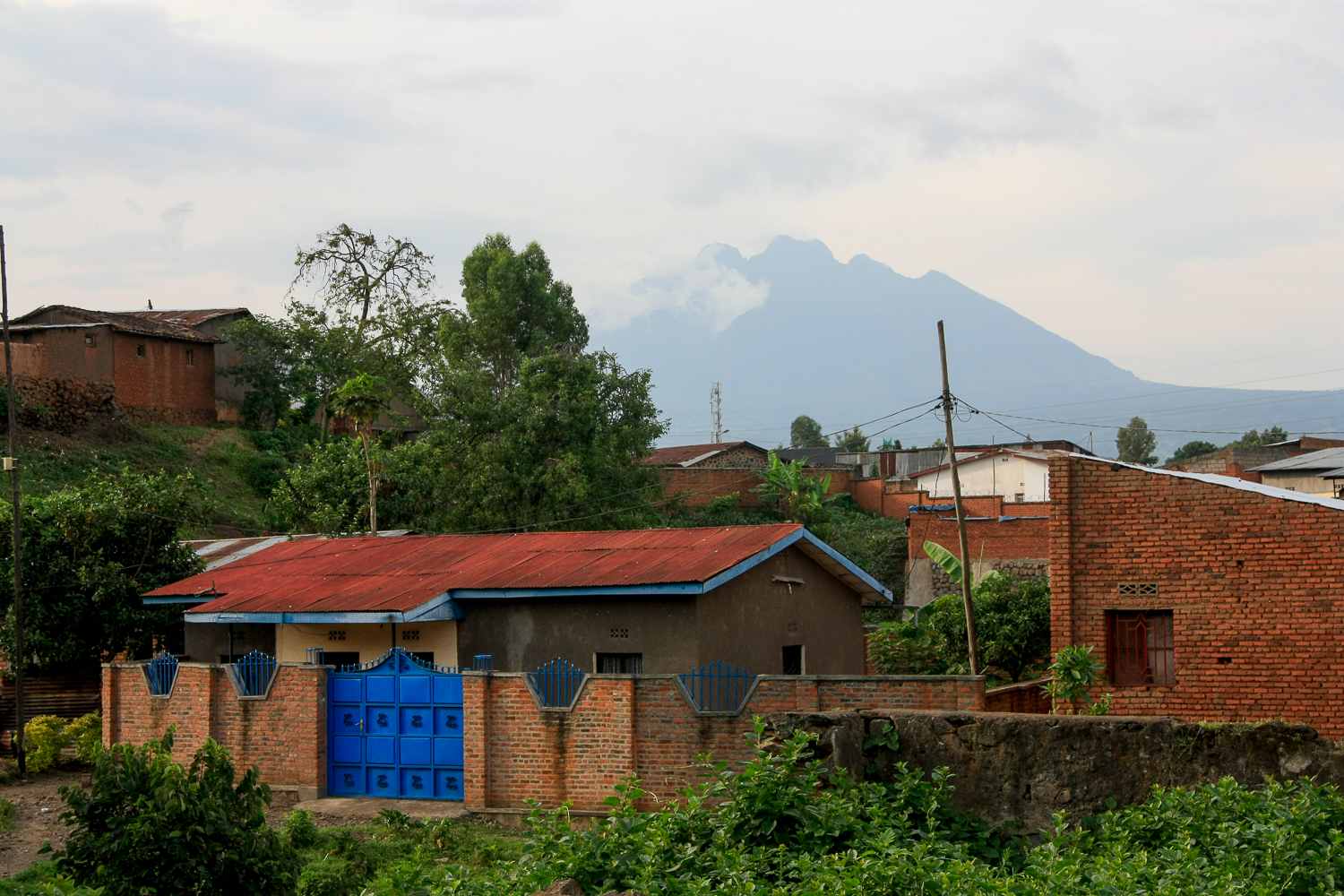 While the genocide touched every part of the country, killing upwards of one million people and displacing far more, it’s honestly so hard to imagine — the scenery seems to portray peace. From Musanze/Ruhengeri, with its views of more Virunga volcanoes, the road winds up and down hills (“Rwanda: le pays des milles collines”: the country of a thousand hills) and scenic villages, descending down to Gisenyi/Rubavu, a large town steeply situated on the shores of Lake Kivu. It also happens to be contiguous with

Goma, Democratic Republic of Congo (formerly Zaire; not to be confused with Republic of Congo, which is to the west of DR Congo), with the border bisecting the twin towns that share many streets, and both downtowns with walking distance from each other. (Goma isn’t very safe nor is the DRC in general, and the visa’s also not easy to come by, so I stuck to Gisenyi.) 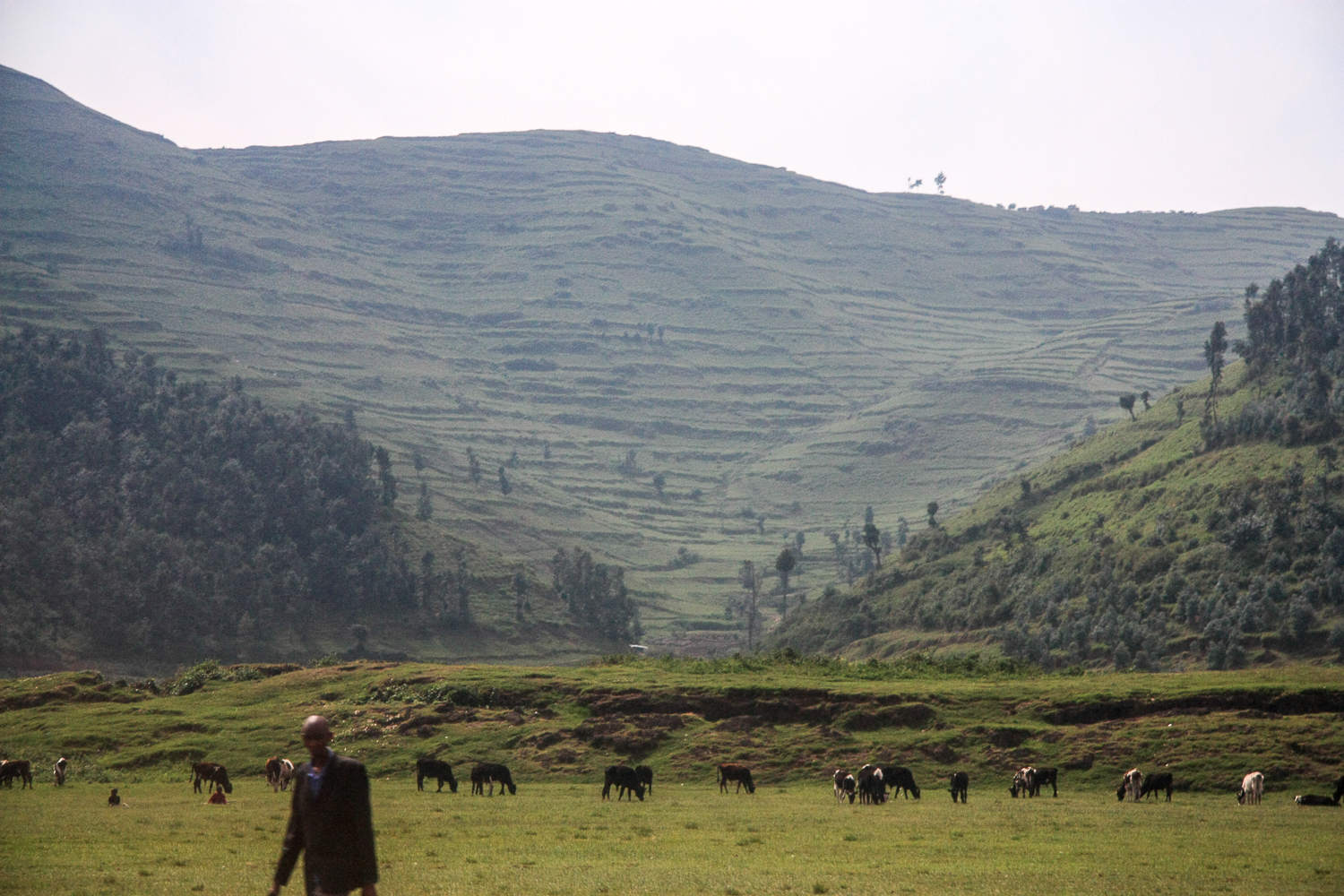 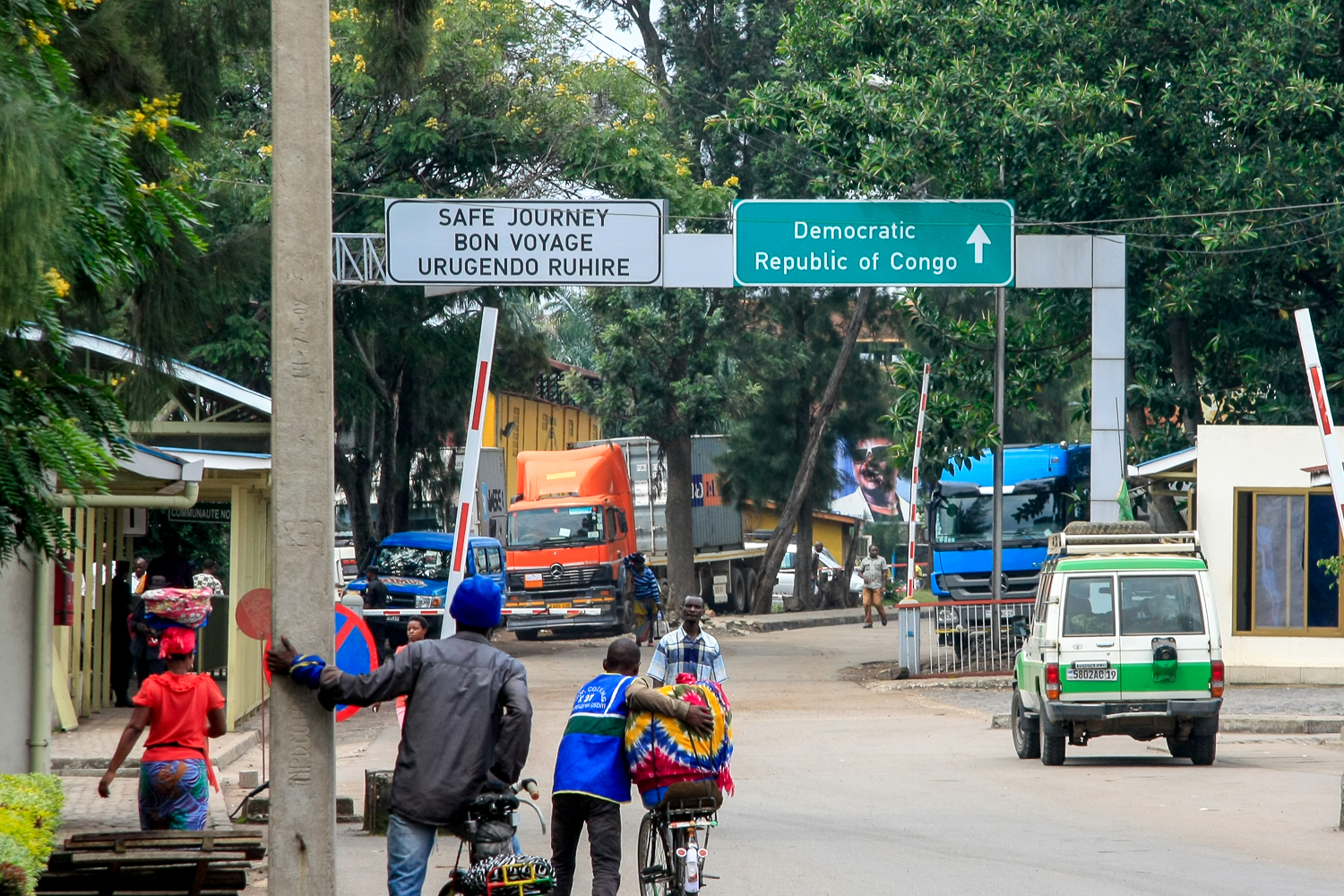 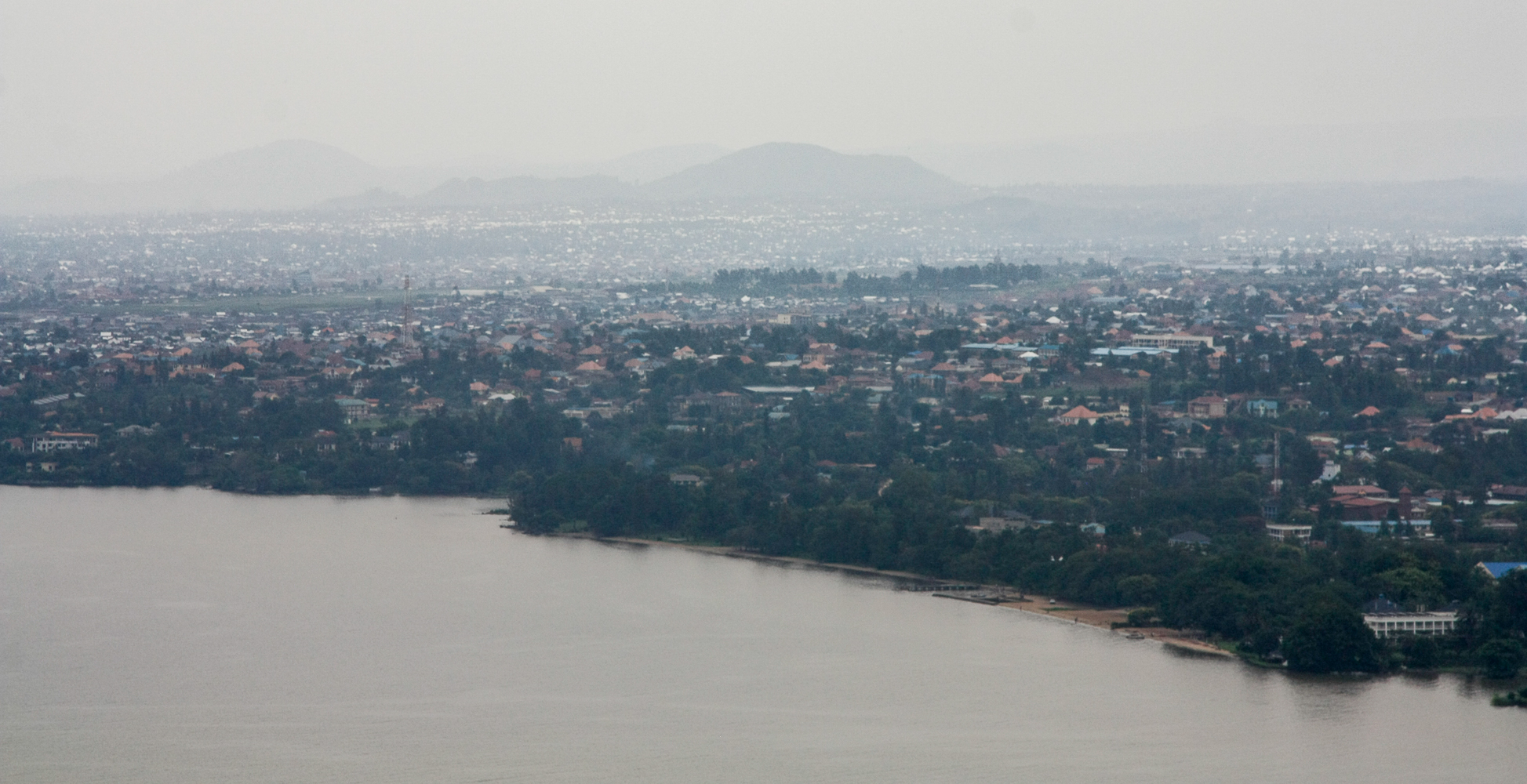 The pace of life in Gisenyi is easy and relaxed, with well-to-do Rwandans and some expats living in villas along the Corniche all the way up to the DRC border (where the Corniche continues, but minus the foreigners). Whether weekday or weekend, the beach is full of locals swimming (and some doing their laundry at the same time) or just digging their toes in the sand. And Rwandans seem to have very odd choice of drink — small shops are wholly-dedicated “milk bars” selling giant beer mugs of “milk” (actually yoghurt) and maybe a few pastries to go along with it. Stranger still was wandering into what looked like the most popular restaurant in town, only to see that practically every single patron had a mug of fresh kombucha made on the premises! Without any sort of prompting, the owner and his sons gave me a very, very, *very* thorough (over one hour) tour of their product development history and business plan and also a bunch of samples (mmmm). Rwanda: the new hipster entrepreneurs?

I met Mandela, a Gisenyi resident studying public health in Goma who thus crosses the Rwanda-DRC border 10 times a week, when he greeted me on the street in French and was surprised to hear a response in French. (He studies in the DRC since it’s cheaper and in French, while Rwanda only teaches in English, which he is weak in. He suffers from at least one robbery attempt per week while walking in Goma, and he doesn’t even have much.) With no agenda, I decided to walk with him for the next few hours, and we eventually settled to sit by the beach. While crediting the government for the country’s growth and recovery, his perspective of the country is far less positive than mine. 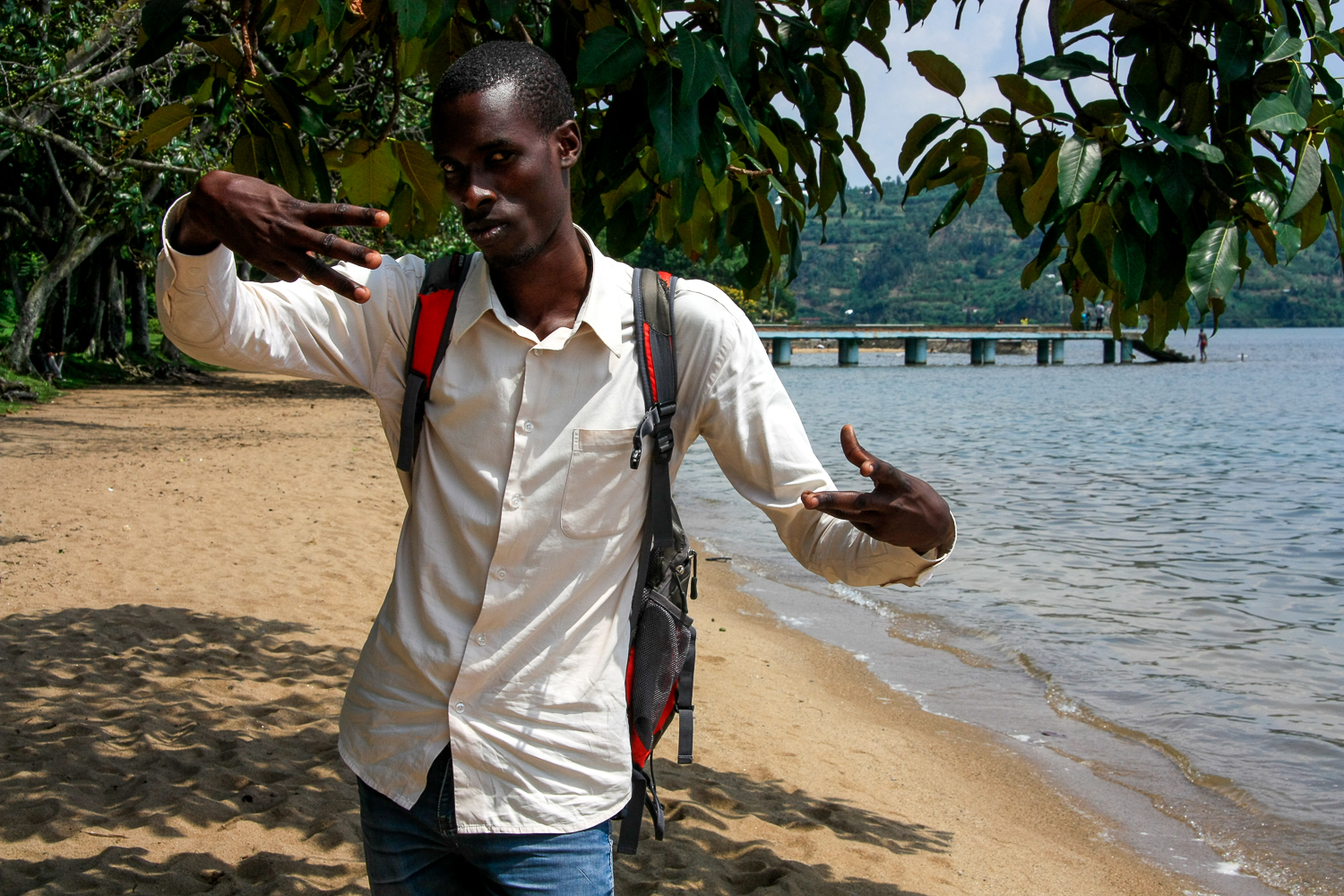 Contrary to the country’s new narrative of “no more Tutsi, no more Hutu, we are all Rwandans”, he opened up with his story as a Tutsi. (Given that he follows all the Tutsi stereotypes to a T — super tall, lanky, thin and long face — it was obvious anyway.) Having lost his father and several brothers in the genocide, which happened when he was just four years old, he was raised by his mother. While he was too young to remember the genocide (April-July 1994) itself, he grew up around it. For the next three years, bodies were lying around everywhere, even on the streets; he mentioned street dogs having to be rounded up and shot dead because they had developed a taste for eating human flesh from all the corpses. And he could consider himself on one the lucky ones: countless others were orphaned and raised by aunts and uncles. In his words (in French), an uncle could never treat his nephew like his own son.

Most of his friends are Hutu. (They make up 85% of the populace, with Tutsi 14% and the pygmy Twa 1%, but all are considered Banyarwanda people. Whether or not they’re different races or just class distinctions is up for debate, but they do all look very different when intermarriage isn’t in the picture.) While the country has made extremely admirable efforts in reconciliation, he described a childhood where, for example, a Tutsi child would get into a fight with a Hutu classmate since the latter’s parents killed his parents. And how could you ever get past that resentment, really? Mandela grew up around the ethnic group that killed part of his family. Many Tutsis and Hutu moderates have had to live side-by-side with the Hutu former-extremists who maimed them or killed members of their family. It’s obvious that forgiveness doesn’t come easy — many do and must have amazing resolve and faith behind them, but there are definitely those with simmering anger but remain, at the very least, complacent.

The country he’s grown up in is a country of orphans. After the genocide and during the rebuilding process, he grew up in an empty country. With so many of the adults simply gone, there was no one around to fill in the gaps for everyday life — commerce, infrastructure, farming, services — but children. That kind of childhood alone, even one where he doesn’t directly remember the violence, has to be traumatic, and there are countless others like him who have had it even worse. With that, plus few job prospects in an overpopulated country (the birth rate is such that the population doubles every 25 years), and a few more impassioned reasons that I sadly didn’t understand in French, he wants out of Rwanda. 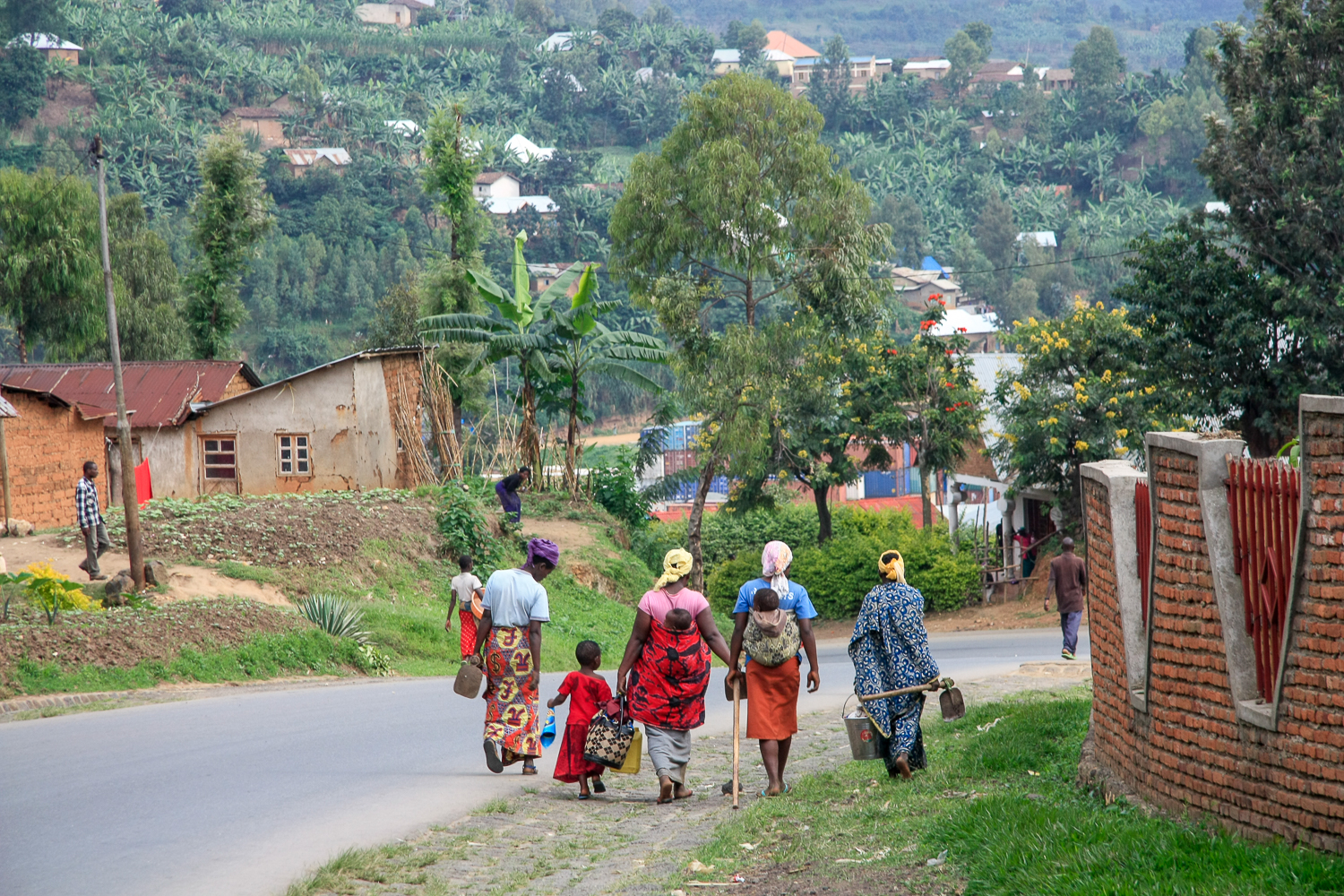 It seems so incongruous with what I’m seeing, yet his sentiments totally make sense. On the streets, I see Rwandans — Hutu and Tutsi and everyone in between — hanging out, doing business with each other, walking hand in hand (as friends, but seldom couples, typically do in Africa). I’m seeing opportunity and optimism. And I’m still finding it hard to see this as a country where such a ruthless and heinous event could possibly have happened, and where such hatred could have been fomented. 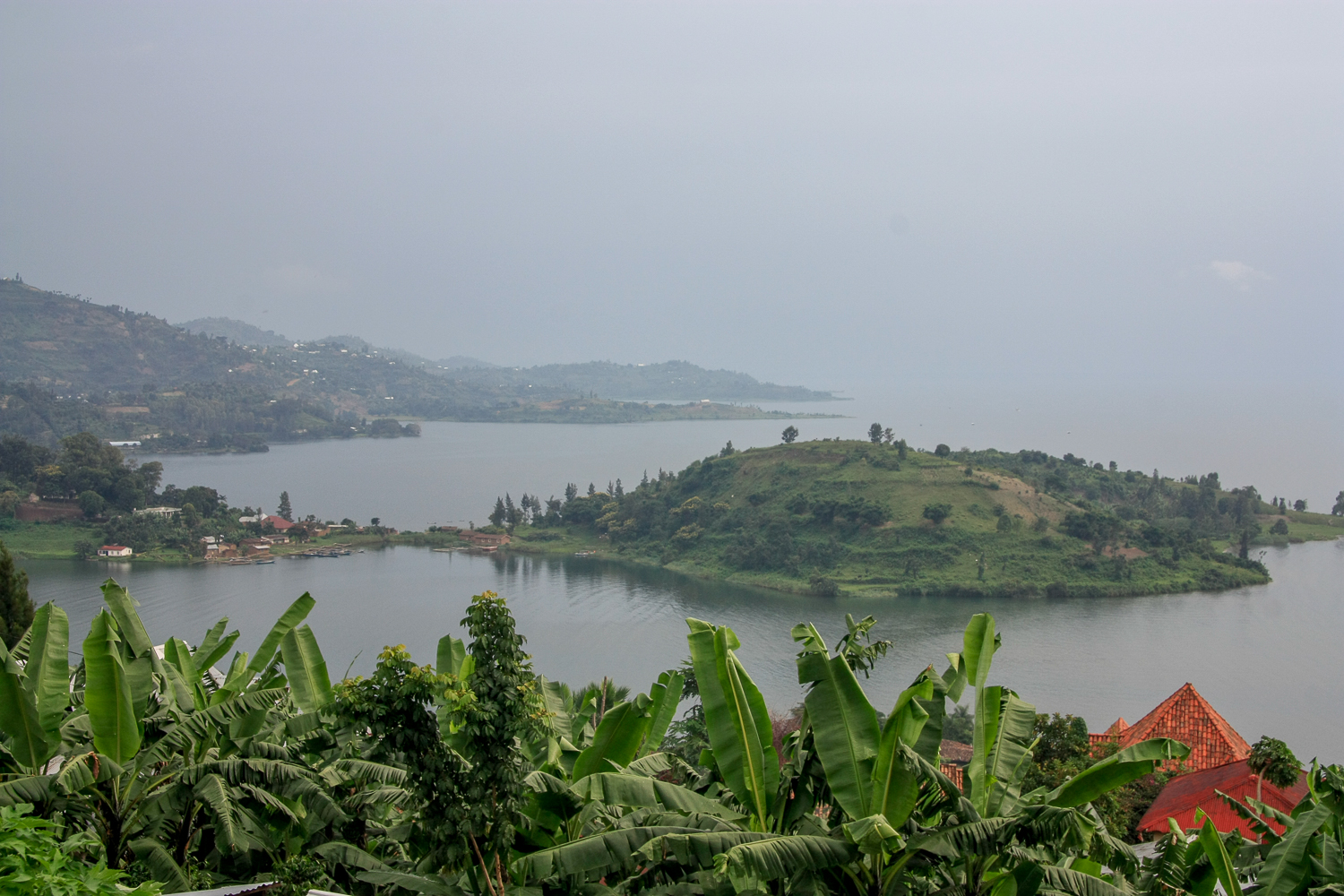 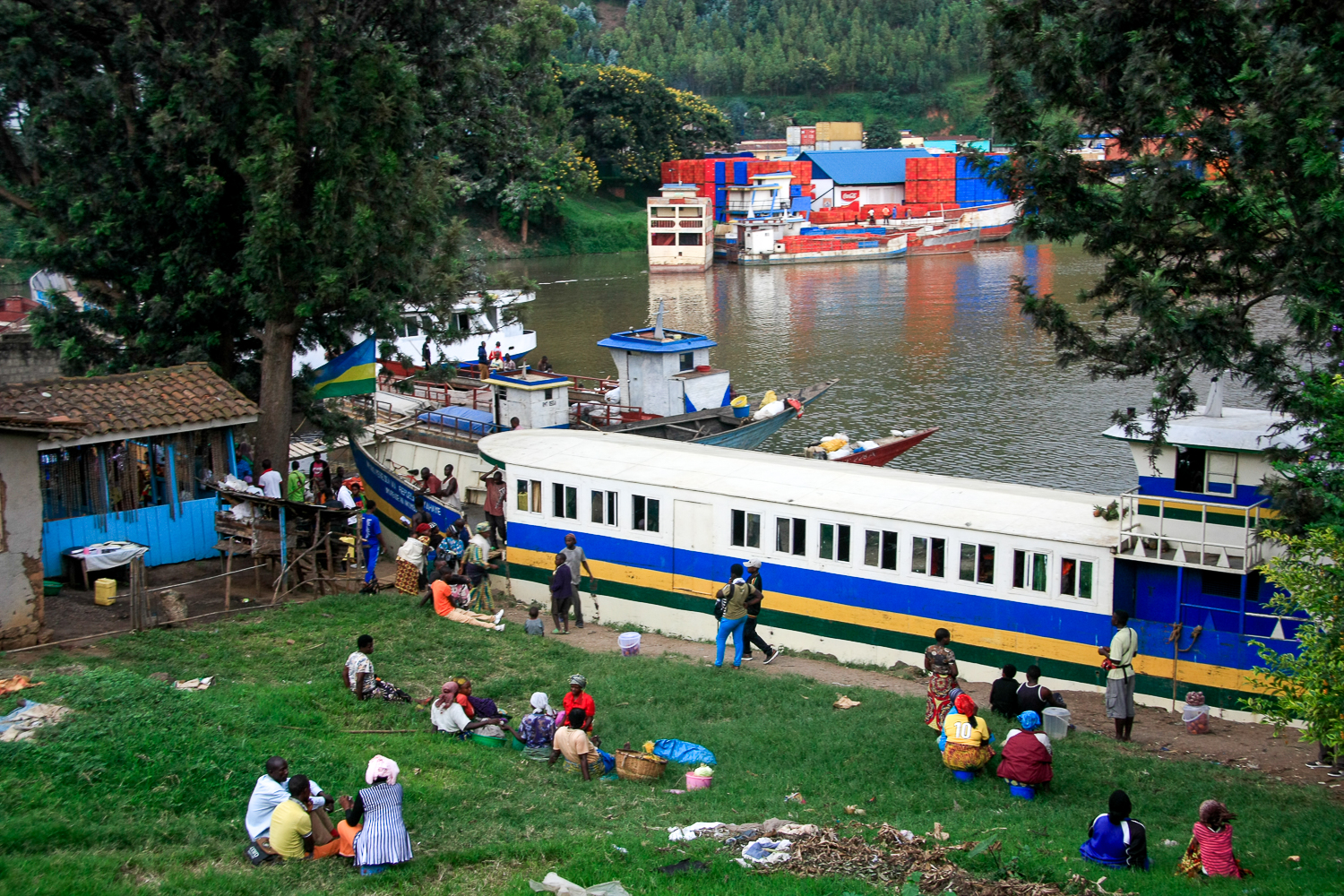 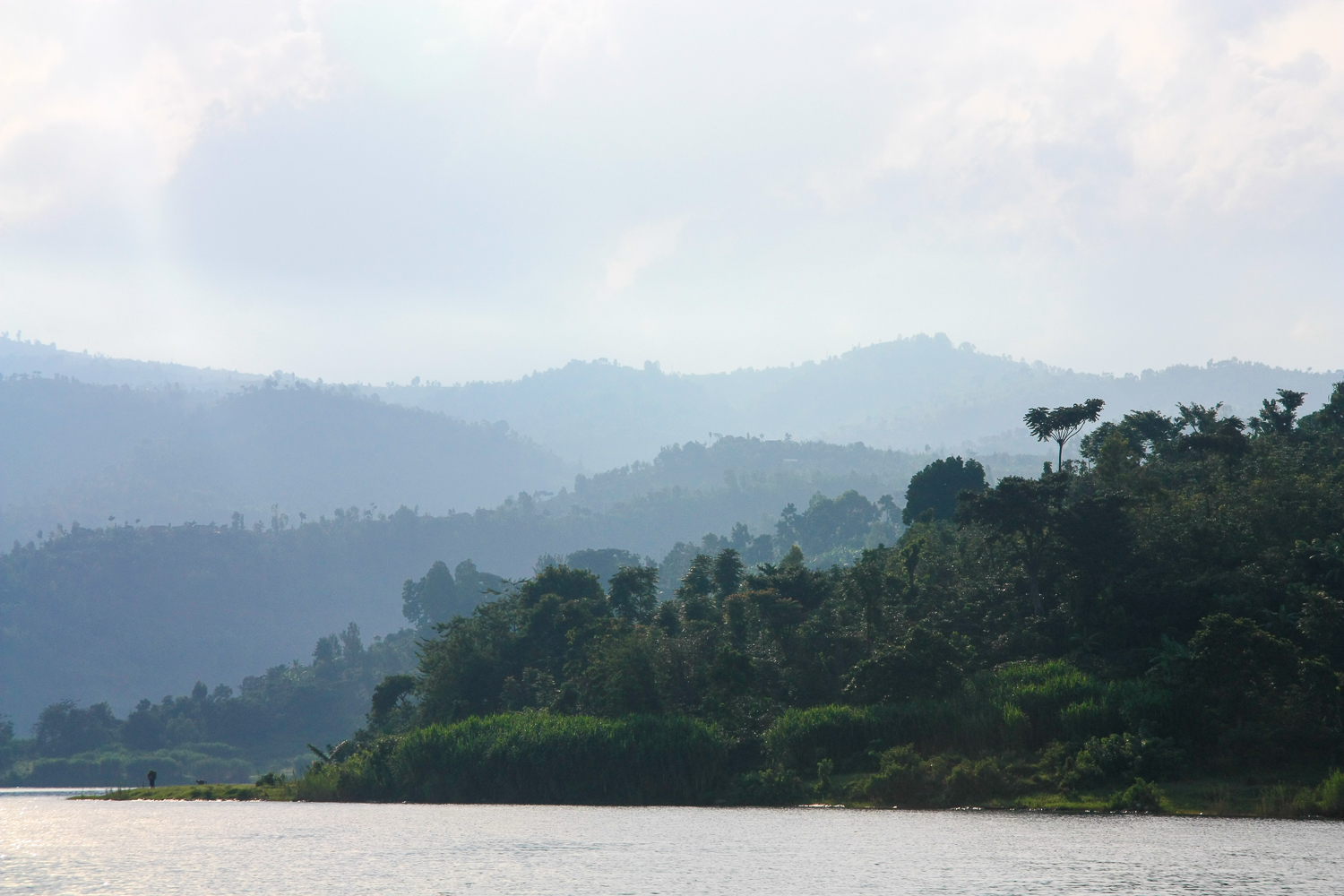 I took the ferry over from Gisenyi to Kibuye/Karongi, staying at a tranquil church-run “home” overlooking the lake for two days. An immaculate garden leads down the hill to the water. Fishermen sing in call-and-response as they paddle nearby to the leader’s rhythm. Across the lake, villages line up and down the hills, with children playing in the water and adults doing laundry. The hills are rolling, and little peninsulas jut into the water, creating a dreamlike landscape. The sun is shining, birds are chirping, there’s peace and quiet. 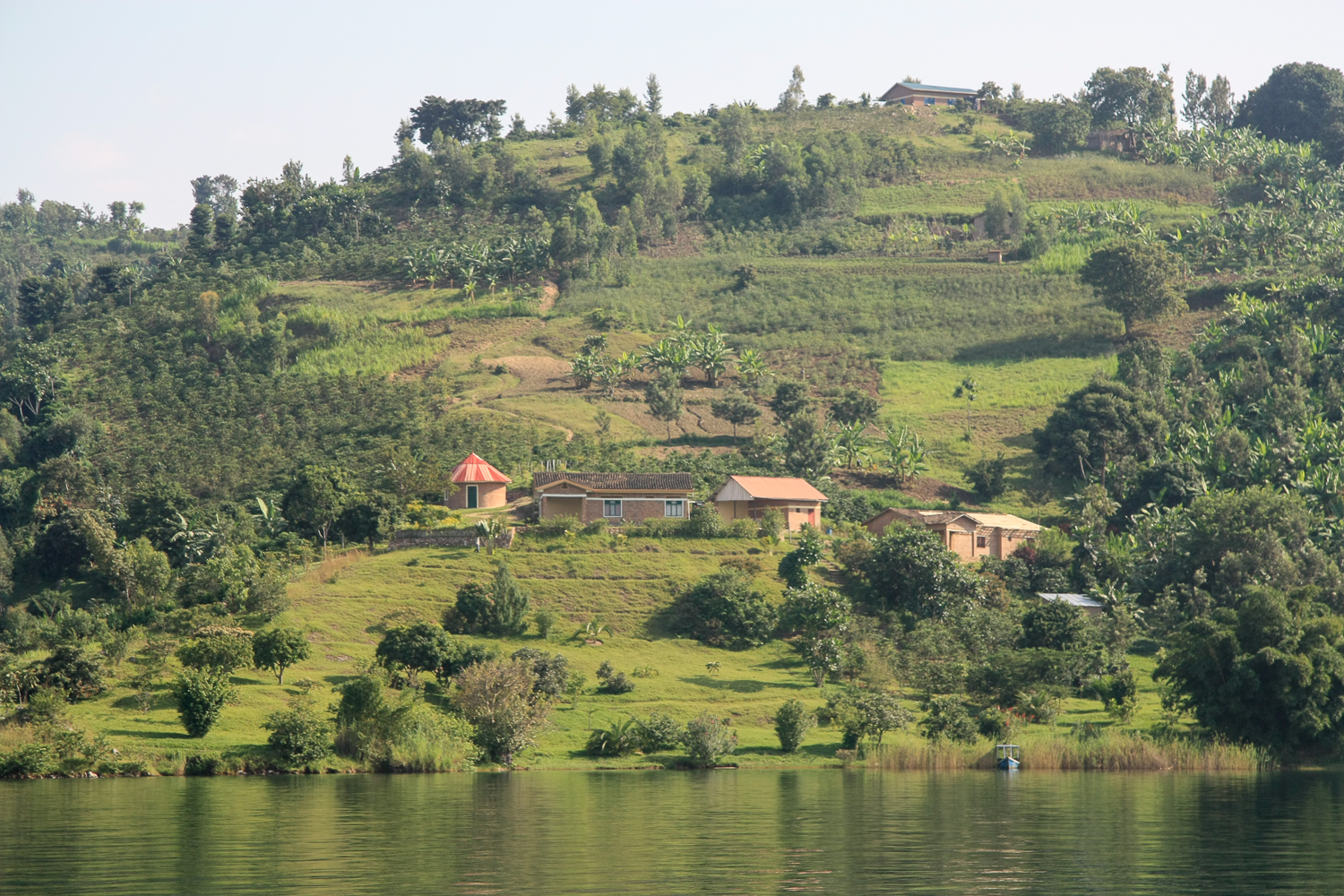 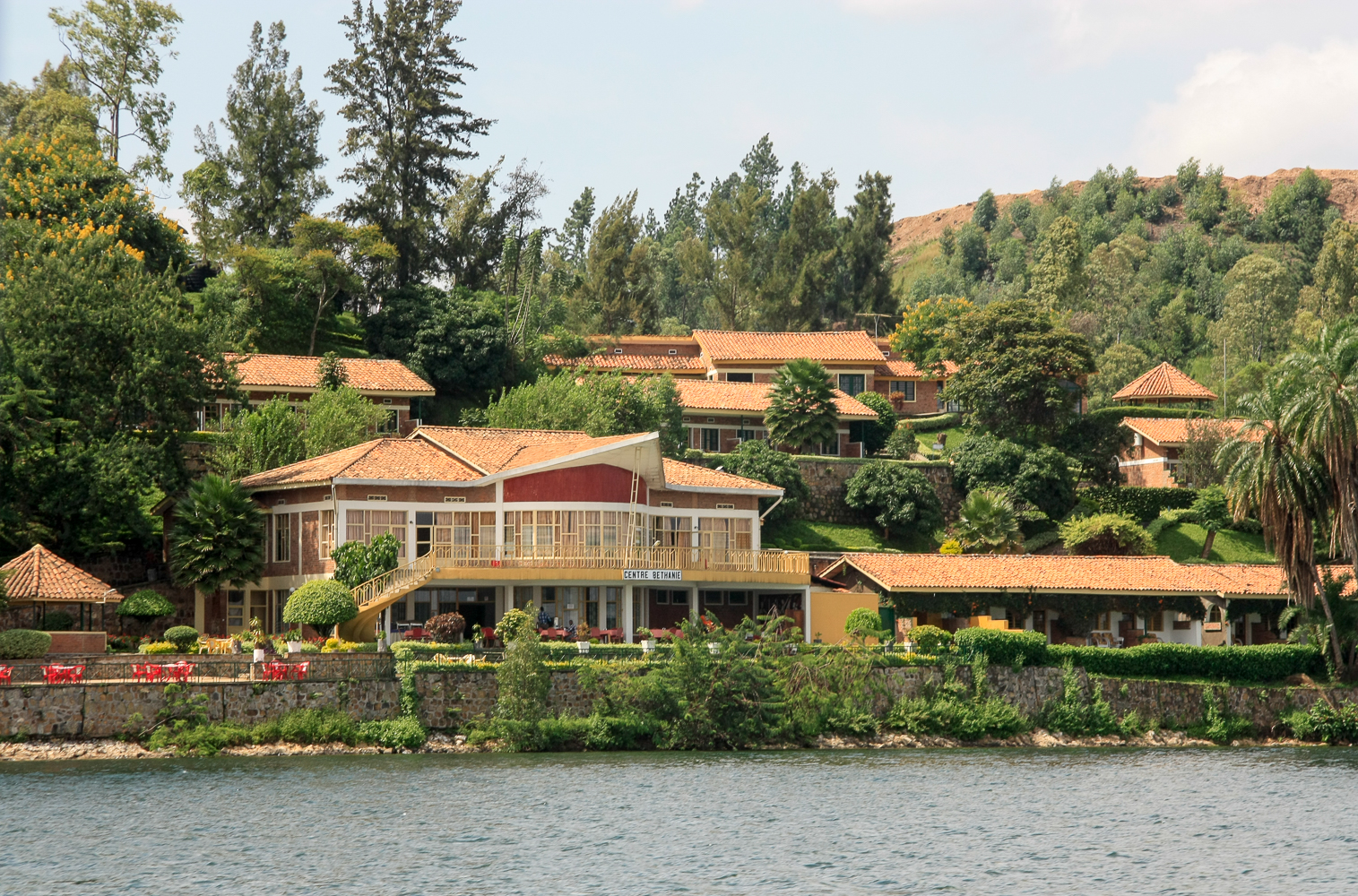 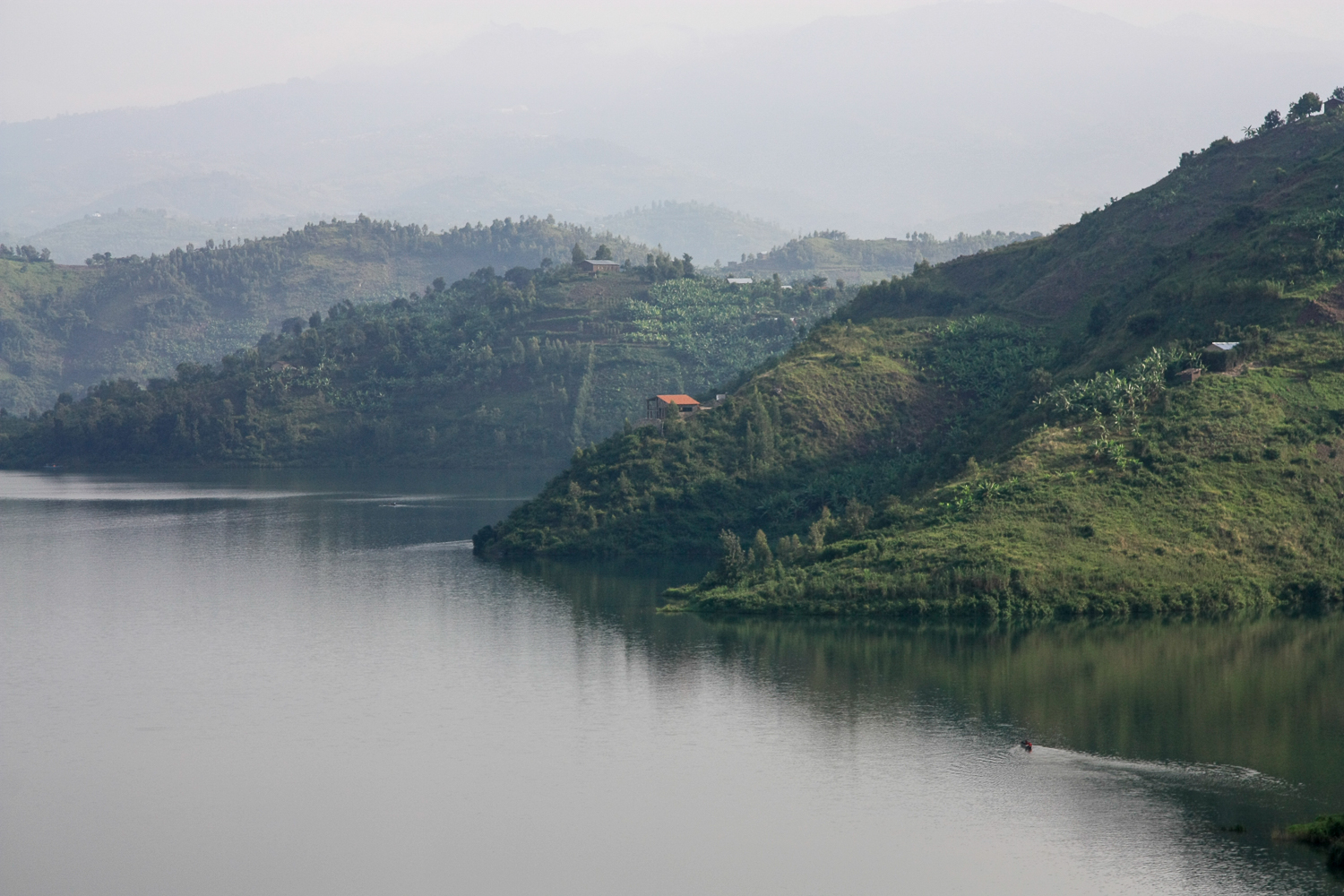 And yet, just a two minute walk down the road is Iglesia St. Pierre, overlooking the lake on both sides. It’s a beautiful brick church with elegant and simple stained glass and mosaics. Right outside of it is a completely understated genocide memorial (which the church itself also is), with maybe 20 skulls and skeletons displayed respectfully but with little signage. You’d never be able to tell that 11,000 people died right there in one night, on that small patch of ground on a hilltop surrounded by water, due to a drunken mob filled with rage. 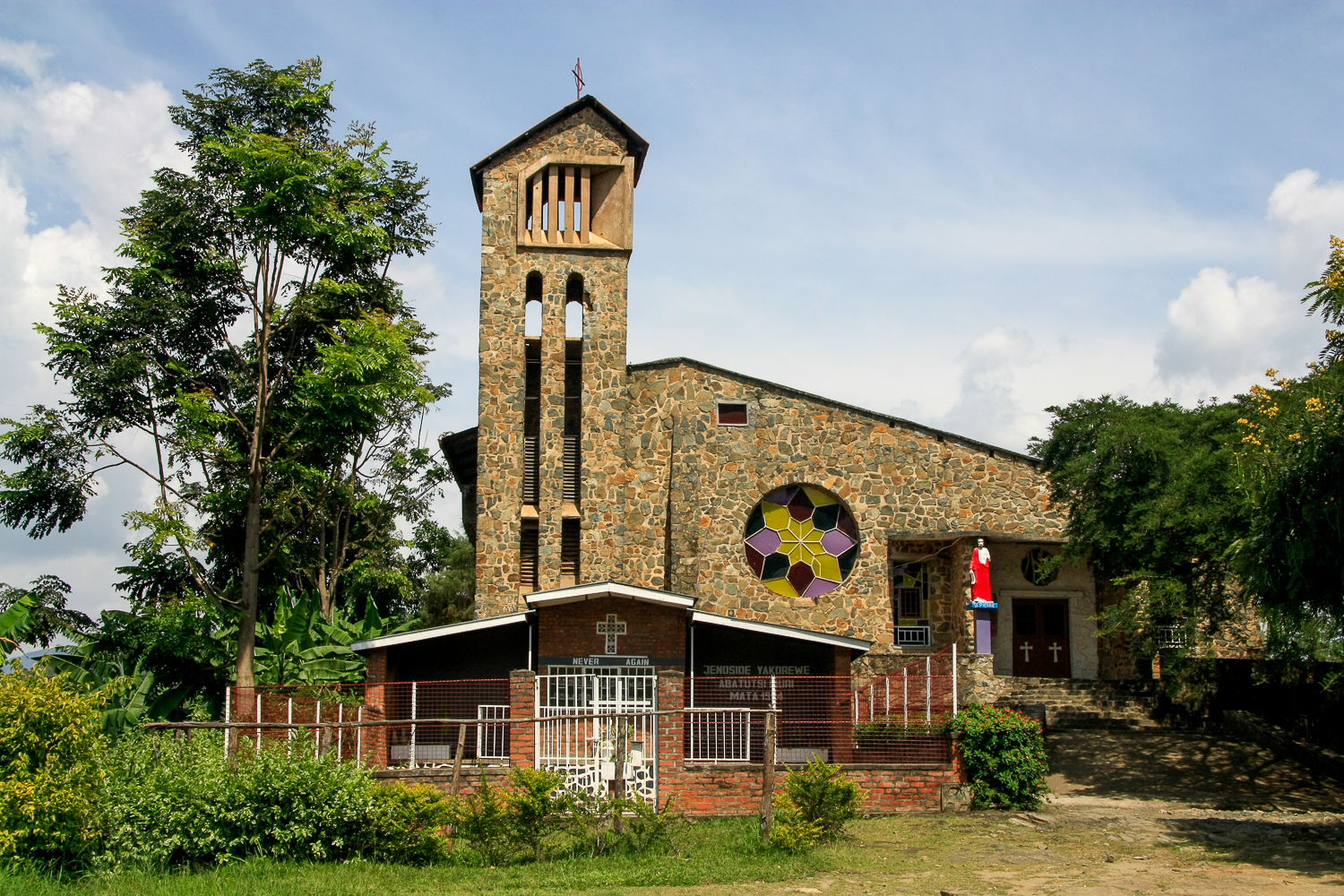 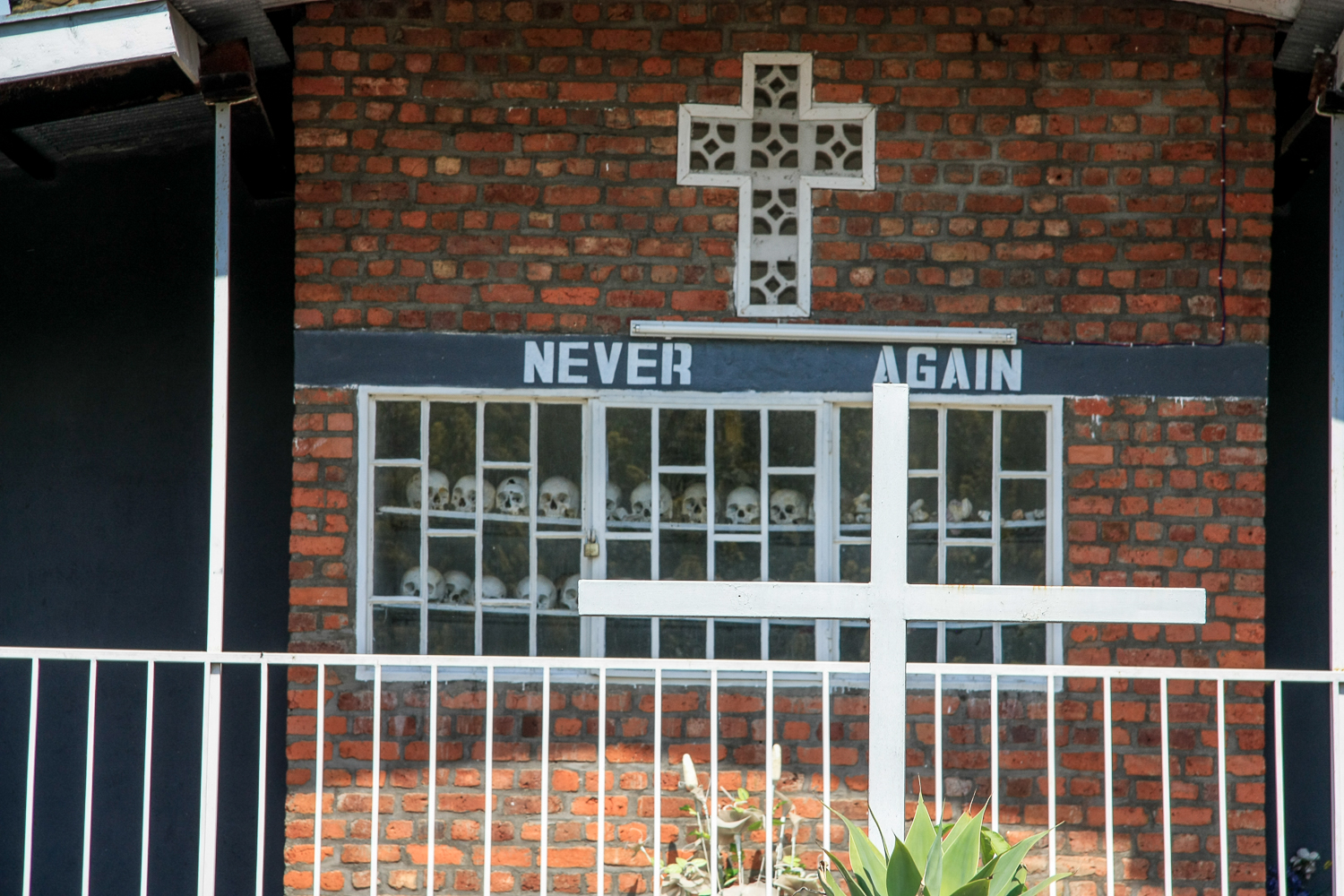