It’s Saturday morning and everything is closed. And boy, am I hungry.

No cars on the road. No moto-taxis. No buses. A scant few people around, but I had to walk for awhile outside of downtown Huye/Butare to see what was going on: umuganda, the mandatory day of community service that happens on the last Saturday each month. High school students took turns with machetes, chopping grass and trimming hedges; university students cleaned up their genocide memorial in preparation for April, the month of remembrance; people of all ages helped out at a church’s garden, preparing soil and fertiliser. All were cheery, despite moments of heavy rain on an abnormally cold morning. Then just around noon, it was all over (and I could finally find some food).

The spirit of cooperation.

Huye’s National Museum suggests as much. The entire ethnographic museum makes absolutely no mention of Hutu or Tutsi (or Twa, for that matter), introducing Rwanda as a monocultural country with a shared history. (The word “genocide” is only mentioned once in the whole building, off in a corner introducing each of the past presidents of the country.) And their cultural history is most certainly impressive — they’re elaborate weavers, making baskets and partitions with incredibly complicated patterns using different fibres, and even weaving their traditional houses from exterior to ceiling to floor mats. Homesteads, like the example one outside the museum, are large, neat, and tidy and in a completely circular formation. Super elegant, and far from the stereotypical “primitive African hut”. 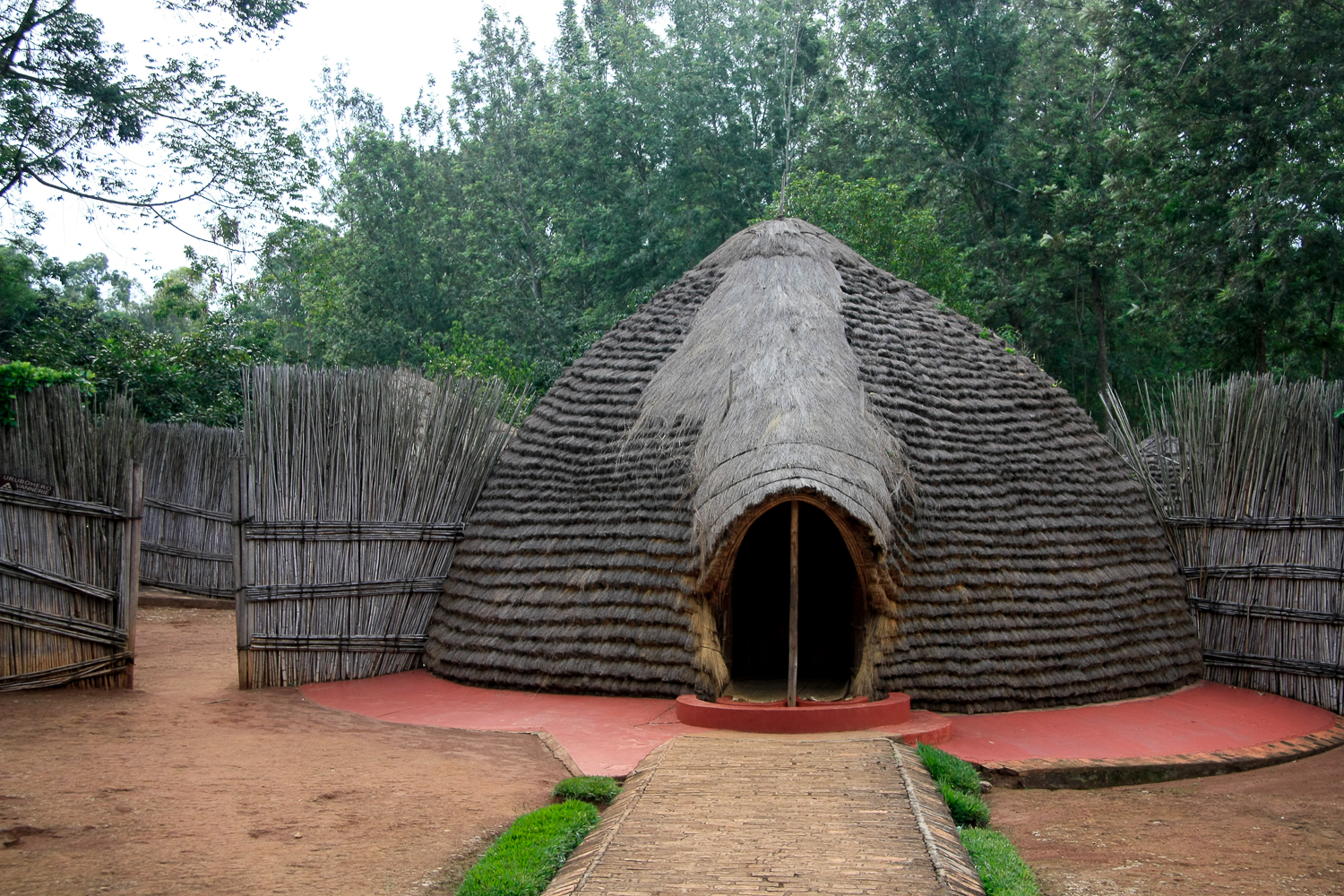 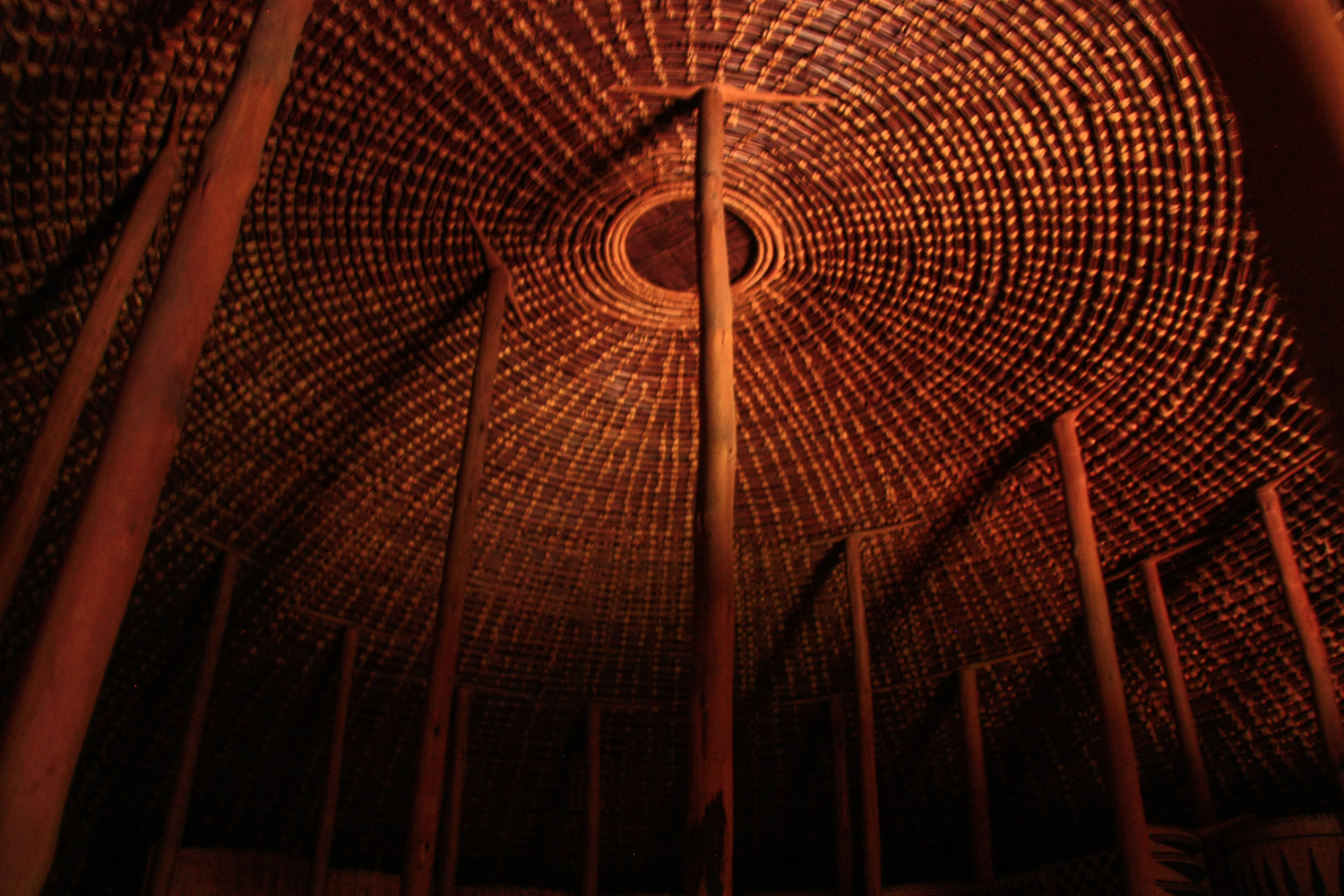 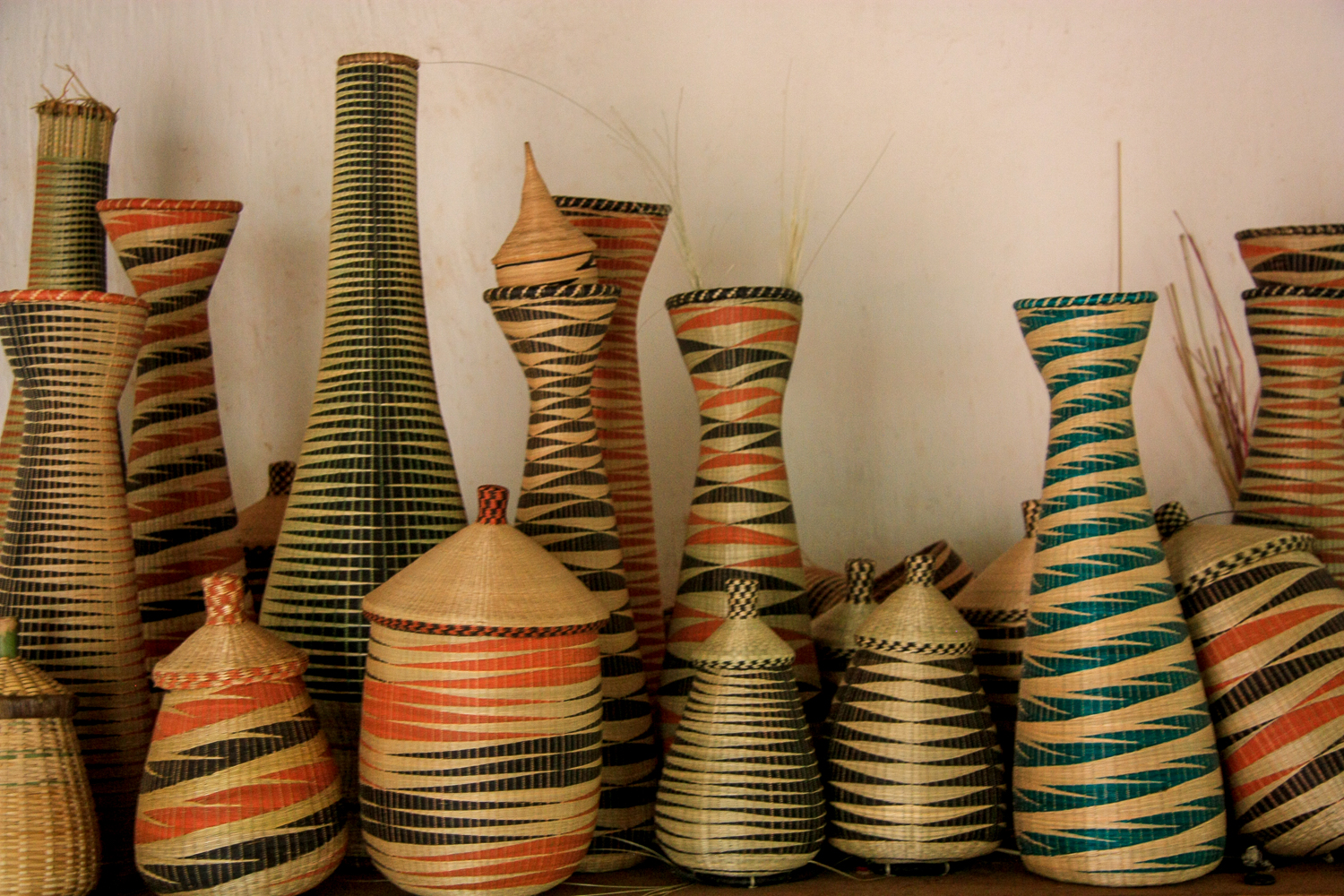 Kinyarwanda is the shared language amongst all ethnic groups (or as the museum simply says, the language of Rwanda), with few if any differences even if you go to neighbouring Burundi (where it’s called Kirundi), which has the same ethnic makeup down to the proportions. It’s also incredibly complex — a single elongated vowel can change completely the meaning of a word. To my surprise, it’s also a tonal language.

Coexistence aside, they did have clan and kingdom conflicts. The most prized possession of each is a ceremonial drum, and warring groups would carry home the losers’ drum — while hanging the genitals of their enemies off of it. Eeek.

It’s these kingdom conflicts that began the minority Tutsi dominance in Rwanda — not such a huge deal at the time, but it was then completely exacerbated by the German and later Belgian colonisers. Choosing to see Tutsi and Hutu (and Twa, though they were impoverished and a tiny portion of the population) as different races, they actively promoted Tutsi supremacy, giving them the status of elites in the country while the majority Hutus were not allowed to hold positions of power. When the Tutsis began asking for independence, the Belgians flipped sides. This created a restive atmosphere which erupted not long after the eventual 1962 independence, where Hutus seeking to “correct” years of discrimination against them tipped the scales and both discriminated against and attacked Tutsis. Tutsis would retaliate, perpetuating the cycle, but they were vastly outnumbered.

By the 1990s, enough Tutsis had fled such that Tutsi refugees in Uganda formed the Rwandan Patriotic Front (RPF), led by now-president Paul Kagame. They captured enough areas of Rwanda that a ceasefire and peace accord had to be negotiated. While all of this was happening, hardline anti-Tutsi Hutus began a propaganda movement to further antagonise the Tutsis, dehumanising and dubbing them “inyenzi” (cockroaches) and even publishing an shockingly racist “Hutu 10 Commandments” in a prominent newspaper, dubbing any Hutu who did anything with a Tutsi to be a traitor. They started a radio station that broadcast racist content of all kinds, including a “hit list” of traitors — this incited significant incidents of violence. Even some churches began preaching a message of hate, and Biblical passages were misappropriated to provoke.

It was just around this time that word leaked from an informant to Canadian Lt. Gen. (and now-retired senator) Roméo Dallaire of the UN Mission in Rwanda that something big was about to happen. The extremist wing of the government was plotting a “final solution”, secretly amassing a large army of Hutu, called the Interahamwe, and an abnormally large supply of weapons. In addition, there was a plot to kill Belgian peacekeepers to get Belgium to withdraw its troops. Dallaire desperately pleaded with the UN for some 5000 additional troops, protection for the informant, and the mandate to intervene, all entirely possible requests that would have prevented the events that followed, but instead received a command to stand back.

A peace accord had just been struck between the Rwandan government and the RPF to create a power sharing government, and the extremists were not pleased. On April 6, 1994, a plane carrying both the Rwandan and Burundian presidents was shot down by Hutu extremists (falsely blaming the Tutsi RPF), who proceeded to take control of the government. Broadcasting all over the country, they called up the army and the Interahamwe and all Hutus to take up arms and kill every Tutsi; man, woman, and child; friends and neighbours alike. Those who didn’t were traitors. They had the capacity, and certainly the motive, to kill 1000 Tutsis every 20 minutes.

I took a bus to the nearby town of Nyamagabe/Gikongoro and a moto to the adjacent village of Murambi, situated on a hilltop and site of a vast genocide memorial. During the genocide, fleeing Tutsis were tricked into seeking refuge at an unfinished technical college. The army and Interahamwe (an anti-Tutsi militia supported by the government at the time) trapped them there, with no escape, before massacring 40-50,000 of them on April 21, 1994 as they attempted to flee down the hillside. The few survivors were brought to Kigali, paraded by the government to show the international community that no Tutsis were harmed — an insulting coverup.

Outside of the school office that holds the memorial exhibits, you can see orderly rows of unfinished classroom buildings. Three of them, with about six rooms each, have been filled with bodies that were found on along the hillside, now preserved in powdered lime. It’s one of the most difficult things I’ve ever seen in my life: the stench of death permeates the moment you walk into a classroom. On wooden racks in each room are countless bodies. (Out of respect, I took no photos.)

There are men and women and children and even babies. Some still have hair attached to what remains of their skulls — and many of them have shattered skulls. Lives cruelly ended by a bludgeon, a machete, gunfire, or even a grenade. All of them are in the position they were found when they died: that is, cowering, arms raised in defence, covering their faces. Even babies, lying in pieces. Faces and skulls are split and you can easily see where a machete may have cut. Some are missing limbs: the sight of one man’s skeleton with a fresh cut to his ankle (raw bone, not completely covered in the preserving lime) and a missing foot will forever haunt me. Another man had a red striped sweater and tan trousers still on, covered in dust. His face was collapsed inwards, a victim of a bludgeon directly to the nose and eyes. His teeth were deformed.

That was only one of the three buildings. I couldn’t stomach the thought of going to the other two, so I didn’t. But in those three buildings alone lies some 1620 bodies. With the memorial guide, I proceeded to a sheltered area: that was where the rest of the 40-50,000 bodies are buried. We continued to the other side of the campus, where there was a large uncovered pit — 680 bodies were found in that improvised mass grave, which the memorial has left open. There were also some of the unfinished classrooms still under renovation: they plan to display more preserved bodies in them in the future. 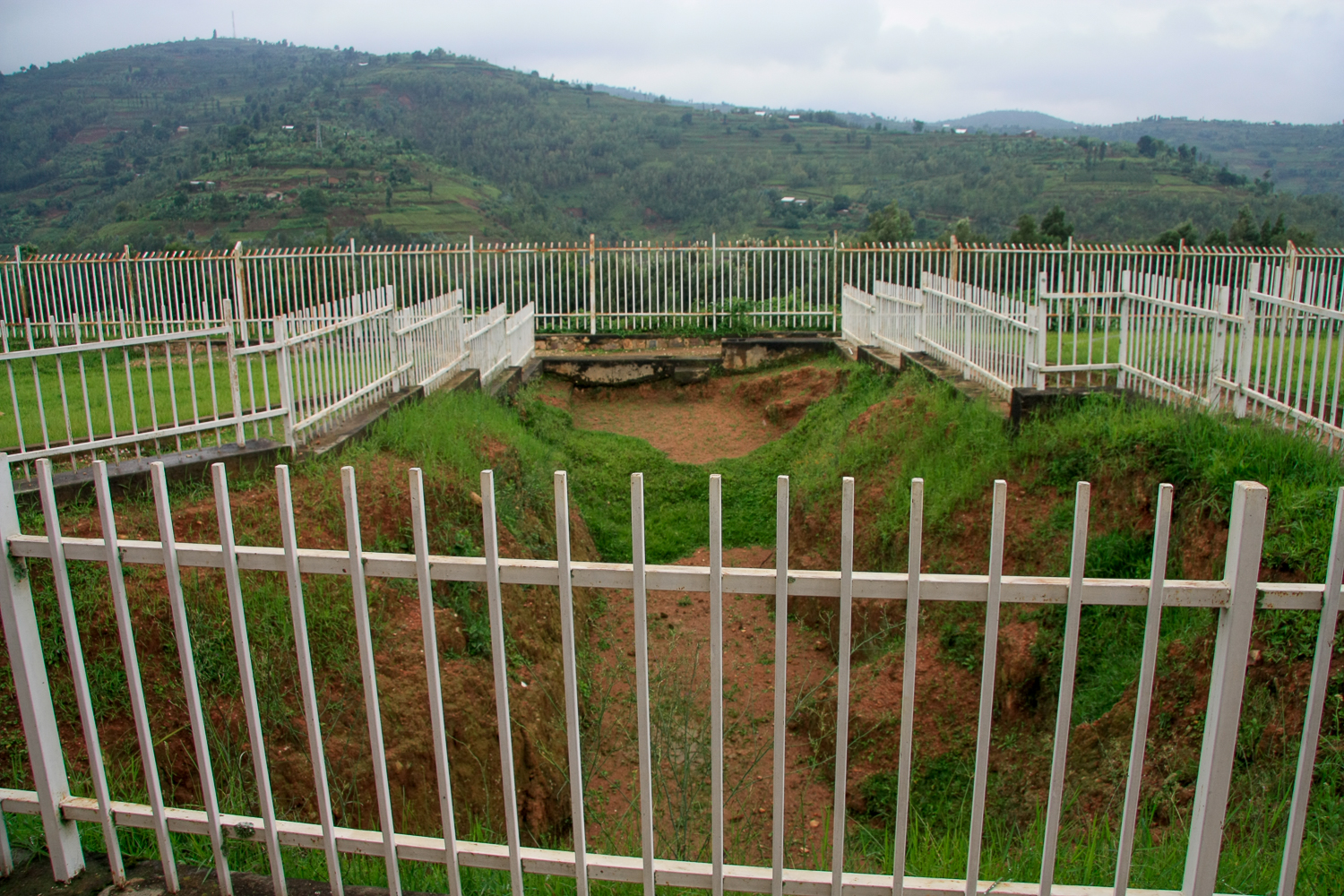 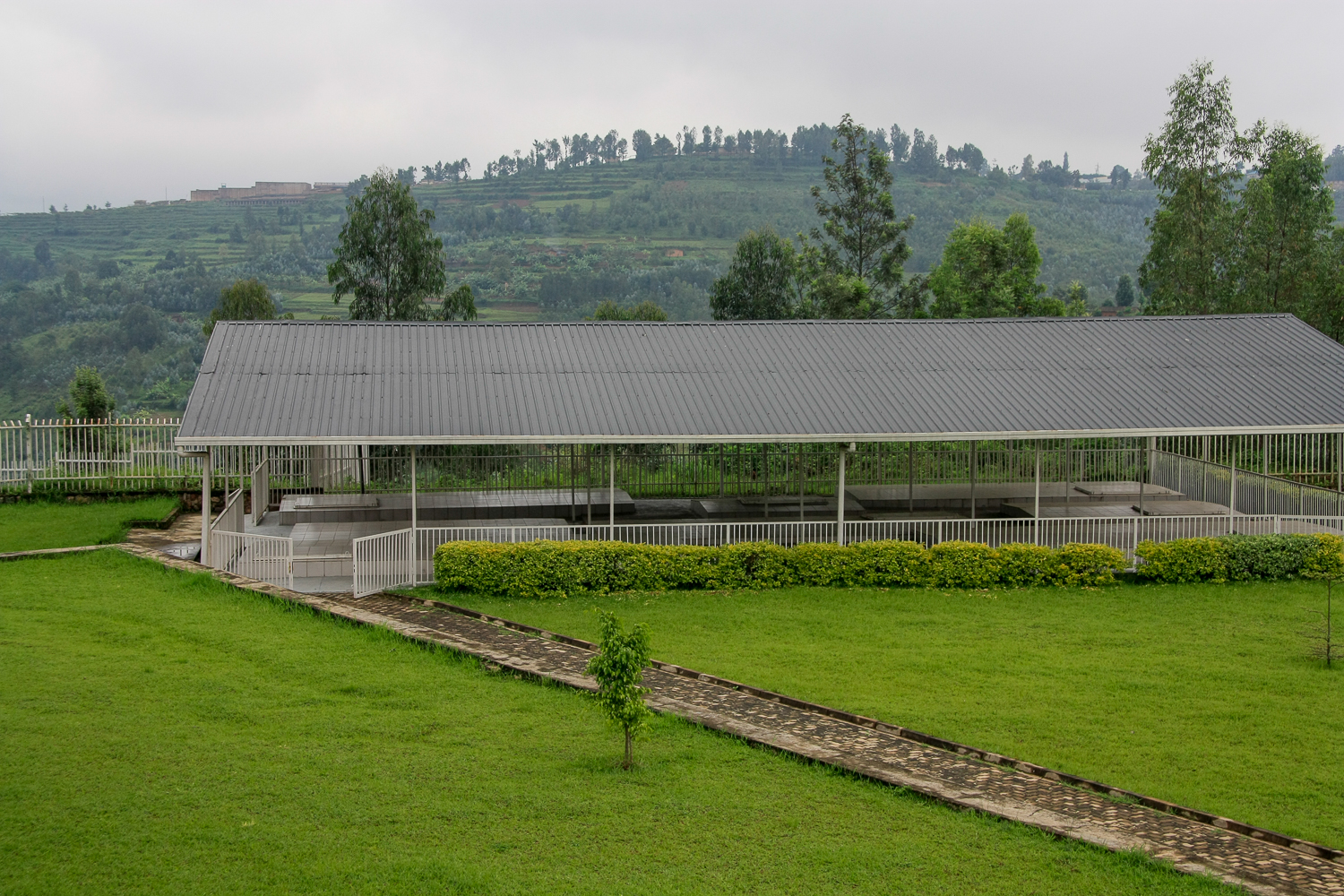 It sounds really cliché, but it started raining, and the beautiful hillside scenery around the memorial took on a more sinister air. The memorial guide mentioned that all the bodies, preserved or not, were found strewn across the entire surrounds, and that mass graves and corpses continue to be discovered to this day. It was really the first time I could imagine all the blood, helplessness, and violence happening where I stood — and this basically happened in every corner of the country. 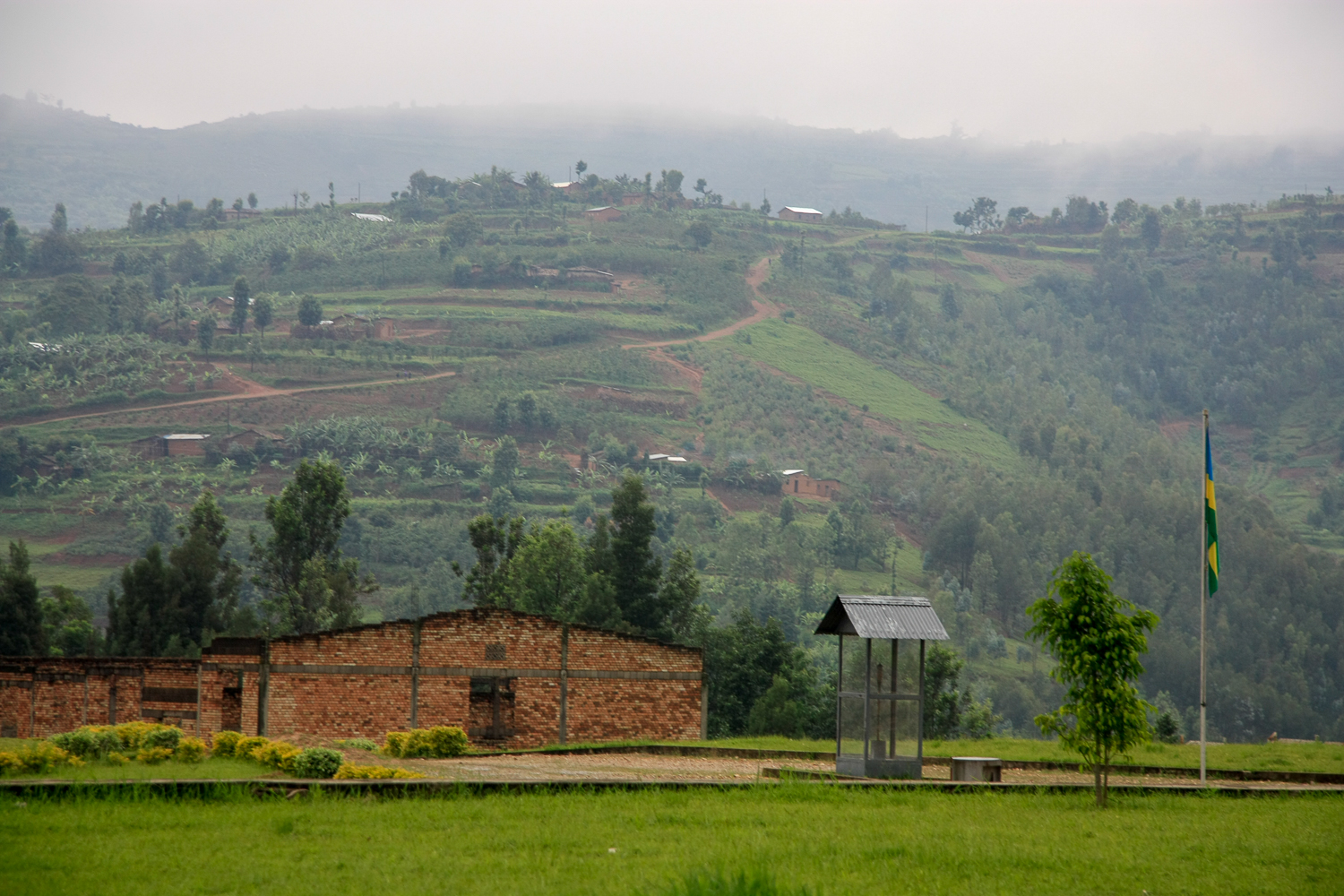 Returning to Huye felt like another world. I walked around the University of Rwanda campus and met Jackson, who had been cleaning up the university’s genocide memorial for umuganda. (During the genocide, many sought refuge at the university, thinking that the highly-educated populace would be rational and non-violent. Sadly, all the district’s rational moderate residents were killed along with them.) He was born after the genocide, and took the umuganda duties of the day with much respect. For him, history needs to be preserved in Rwanda to remind people of the consequences when violence is being committed or incited, for his generation and future ones to come. And incredibly, it also needs to be preserved to prepare against genocide deniers. 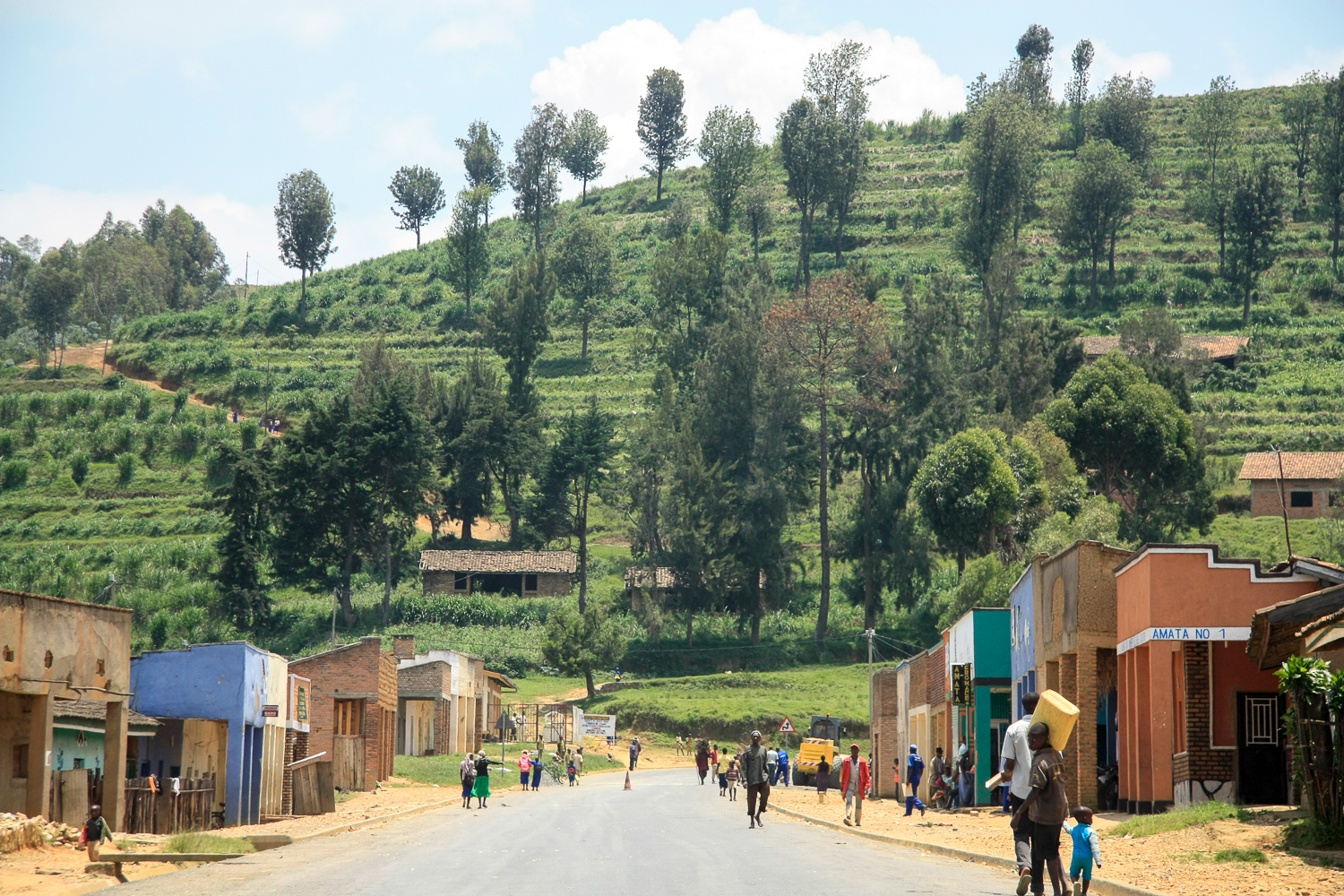 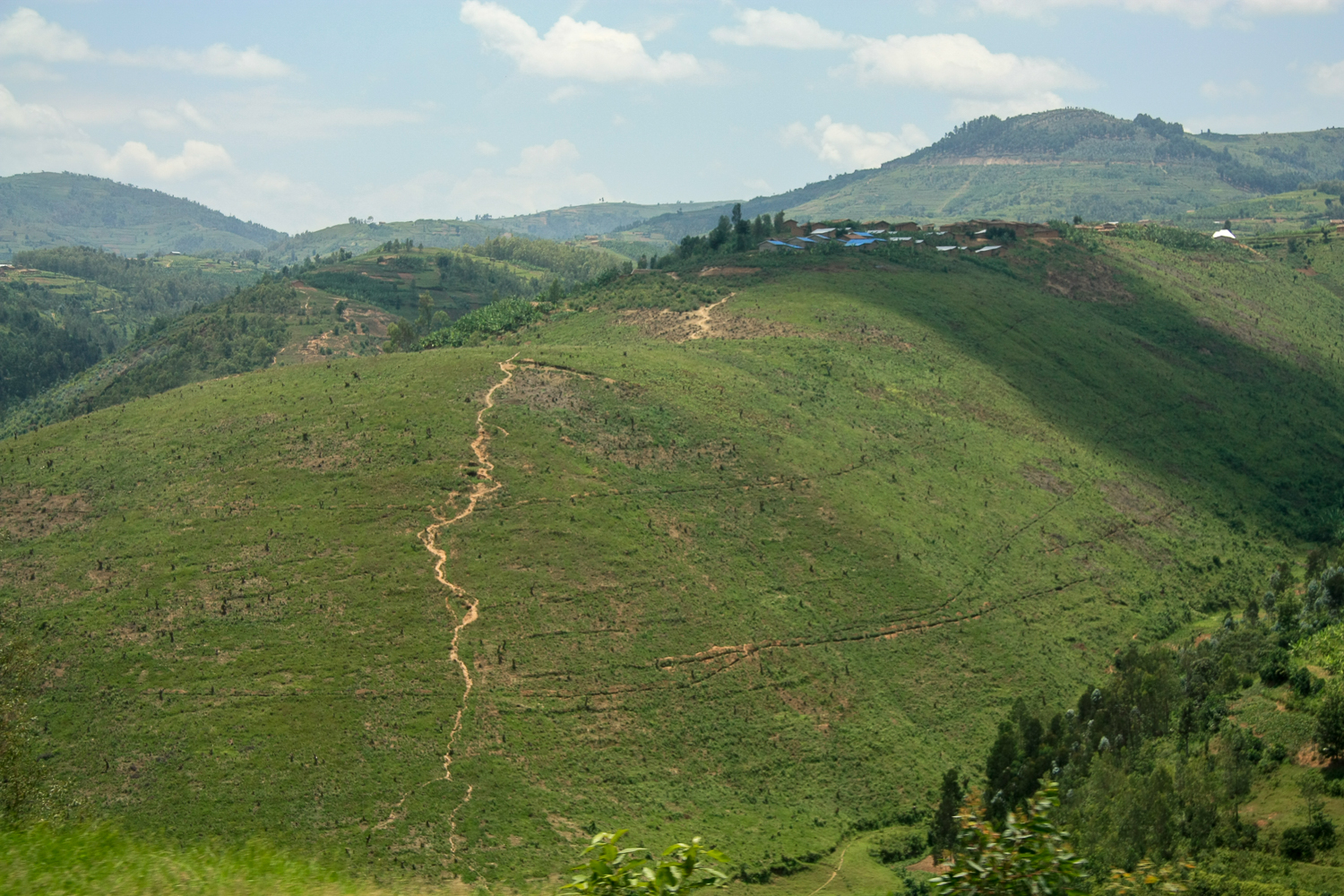 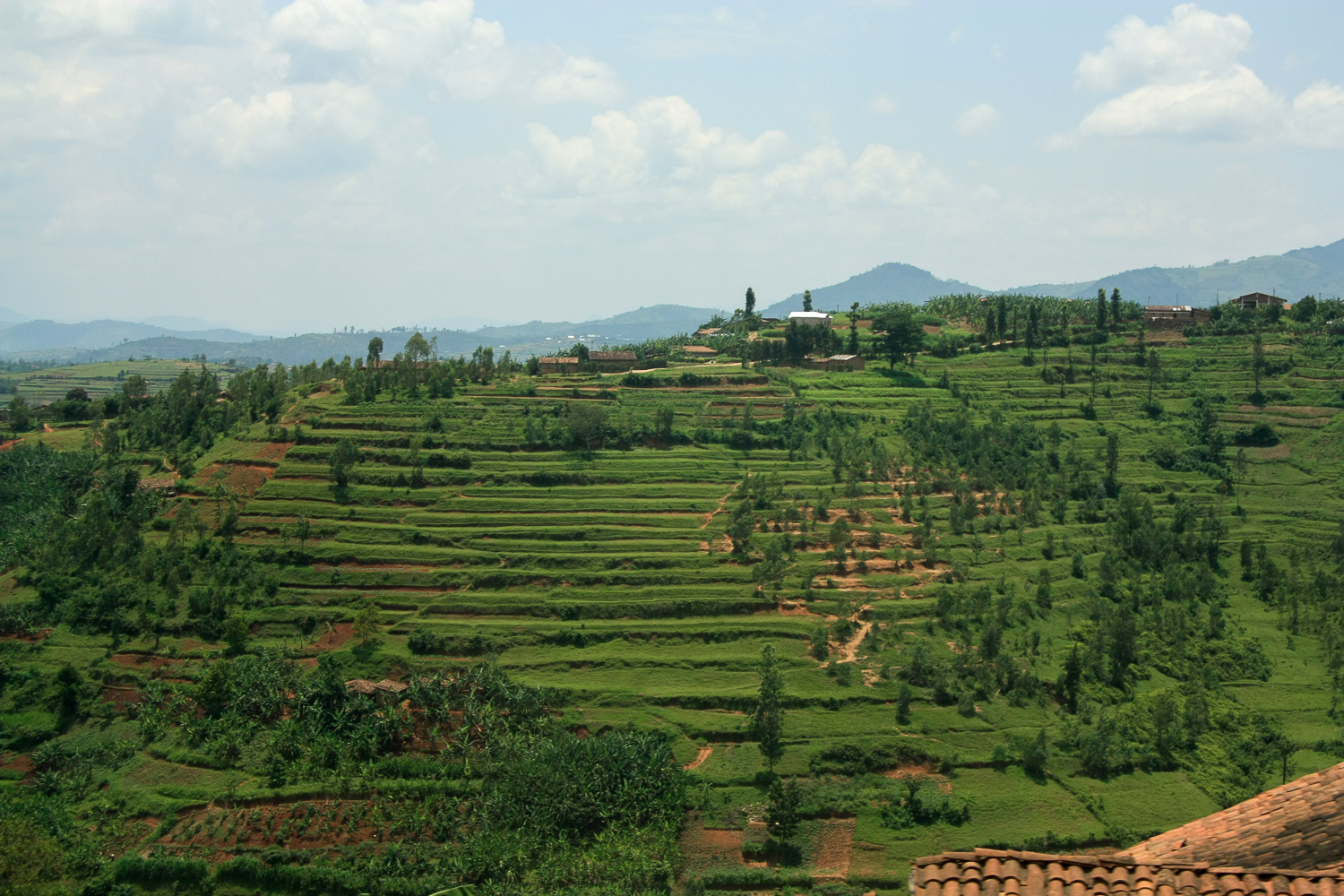 It’s due to the peace that Rwanda has become so prosperous (relatively speaking, to its neighbours; though it does still rank somewhat low on the world stage), with rapid development and increasing opportunities at home and abroad. There’s still a ways to go, but they’ve essentially rebuilt an entire country from nothing in just some 20-odd years.

Burundi is just 50 km down the road. They’ve had two genocides, albeit on a much smaller scale, of Hutus against Tutsis and later Tutsis against Hutus. Even today, they still have instability. Rwanda has been working intensively on national unity, and their peace has brought a solid foundation and a singular vision to build everything else. Burundi is still wracked with ethnic tensions and violence, with a president bent on power rather than nation building, and is currently unsafe due to a recent coup attempt and opposition-boycotted election. 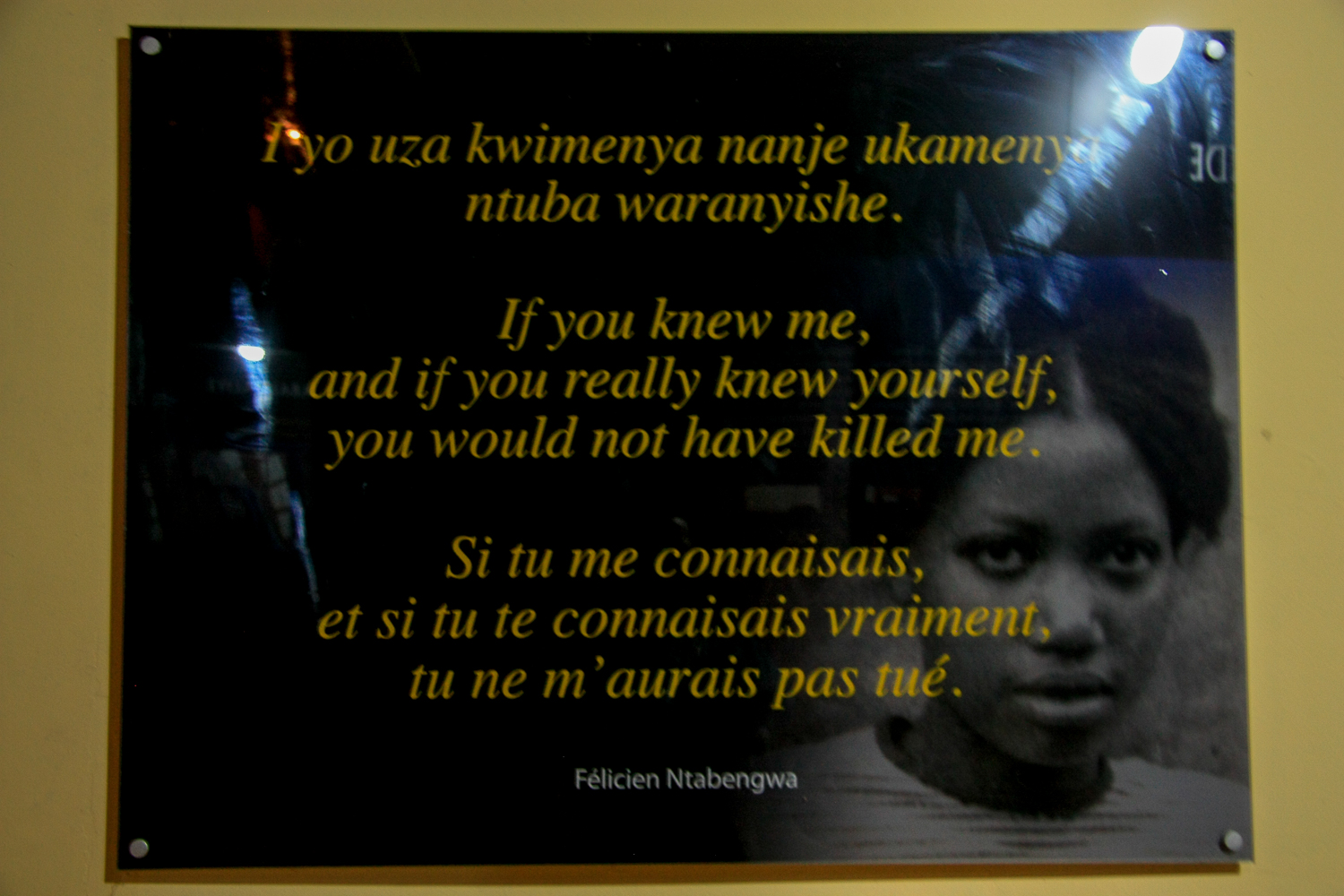 Same ingredients, different outcomes. But it’s a true testament to how far Rwanda has come through cooperation, from how far gone it was before.