See that map on the right? I’m not proud of that. With the end of my trip coming on the horizon, I’ve had to start picking and choosing where I want to go rather than just meandering around. Unfortunately, it means that I’m giving Tanzania the short shrift, and so I made my way across the entire north of the country in a mere six days — three of which I spent on long-distance buses, and the remaining three of which I also spent a lot of time in transport.

Tanzania does have a lot to offer, but a lot of it is similar to what I’ve seen and experienced already. There’s Lake Victoria, which I saw briefly in Uganda and decided to skip over this time. There’s the Usambara Mountains, which I saw on my bus ride from Moshi to Dar — pretty, but I’ve been seeing plenty of hillside villages in Rwanda. There’s the Seregenti, which is contiguous with Maasai Mara NP in Kenya. And there’s also Mt. Kilimanjaro, which I had no interest in climbing due to cost (over $1100!) and time, but I did make an extra stop just to see it.

Still…if I had more time, I would definitely have stopped along the way, maybe experience a bit more of local life. I haven’t had much of a chance to talk to locals like I have in my past five countries. I blame it on having to rush so much, but I also wonder: people in Tanzania are super welcoming, but not particularly chatty. I’ve had plenty of friendly people greet or assist me on the street, but none seem to linger or continue to chat, even on those 12-hour long bus rides. Also probably a big reason: many speak only Swahili and little to no English. They do seem to be truly happy to see visitors though, and they’re proud of their country.

Despite being quite impoverished, especially in comparison with Kenya and Rwanda, Tanzania probably sees the most tourists out of any East African country, so outside of remote villages, locals are quite accustomed to seeing foreigners around and tend to leave us alone unless we approach them. It’s a bit of a double-edged sword — while it’s awfully nice not to have people hounding me with cries of “mzungu!” (Swahili for “white person”; also used in Kenya, Uganda, and Rwanda) or “China!” or “Japan!”, it does mean people seem to be a bit more reserved and inscrutable. (On the other hand, I did learn that they’ll call anyone by their ethnicity if it seems remotely obvious — lots of “hey, Maasai!” going on.)

Anyway, much of the travel did feel a bit thankless. My first two days comprised of two gruelling journeys switching between buses and dala-dalas (aka matatu/taxi/tro-tro/minivan) with nothing but flat land, overheating engines making the floor of the vehicles too hot to rest my feet on (though I did feel sorry for those who were in the aisles!), and cramped legs from Kigali all the way to Arusha.

Flexing some negotiation muscles for an unusual 1-night/1-day safari well under market price, I took a dala-dala two hours from Arusha past the town of Mto wa Mbu to my included accommodation, a basic but beautiful site overlooking Lake Manyara. 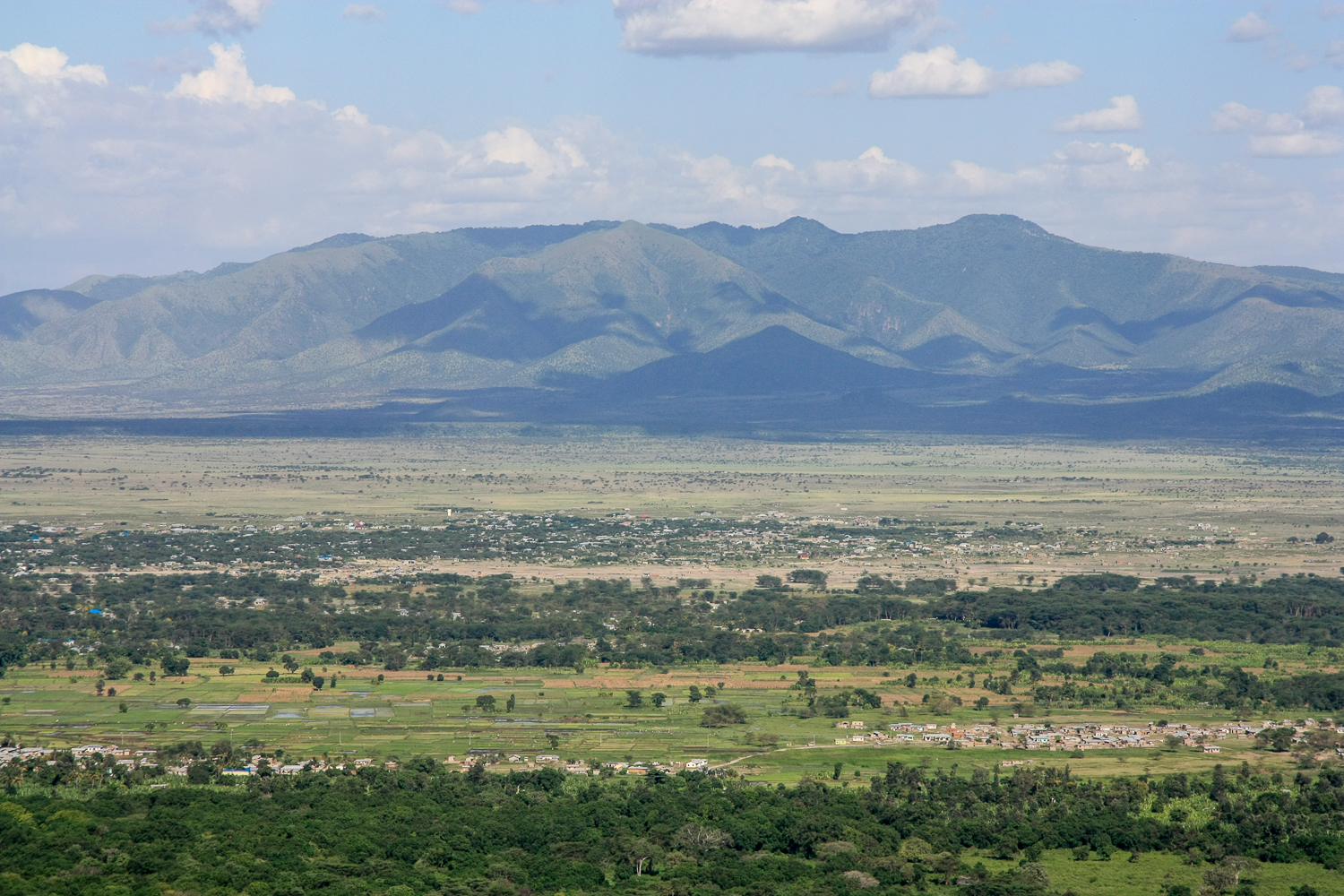 Joining the group the next day, we headed to the famous Ngorongoro Crater. Basically everything I didn’t get in my Kenyan safari, I made up for this time — we had splendid weather, plus I got to see a rhino, a male lion, and hippos out of water, albeit all from far away. Even without that little bonus, the crater’s scenery is incredible. Our vehicle climbed through a forested road in the morning fog, then dropped suddenly, revealing a sun-drenched, green plain dotted with animals everywhere. While we couldn’t get as close to the animals as in Kenya, the experience was no less enchanting, with elephants constantly lingering in the background of the grazing-in-your-face zebras, wildebeest, and gazelles. One rather overheated female lion saw our stopped vehicle from afar and walked all the way over, right under my window, simply to use the vehicle as shade! 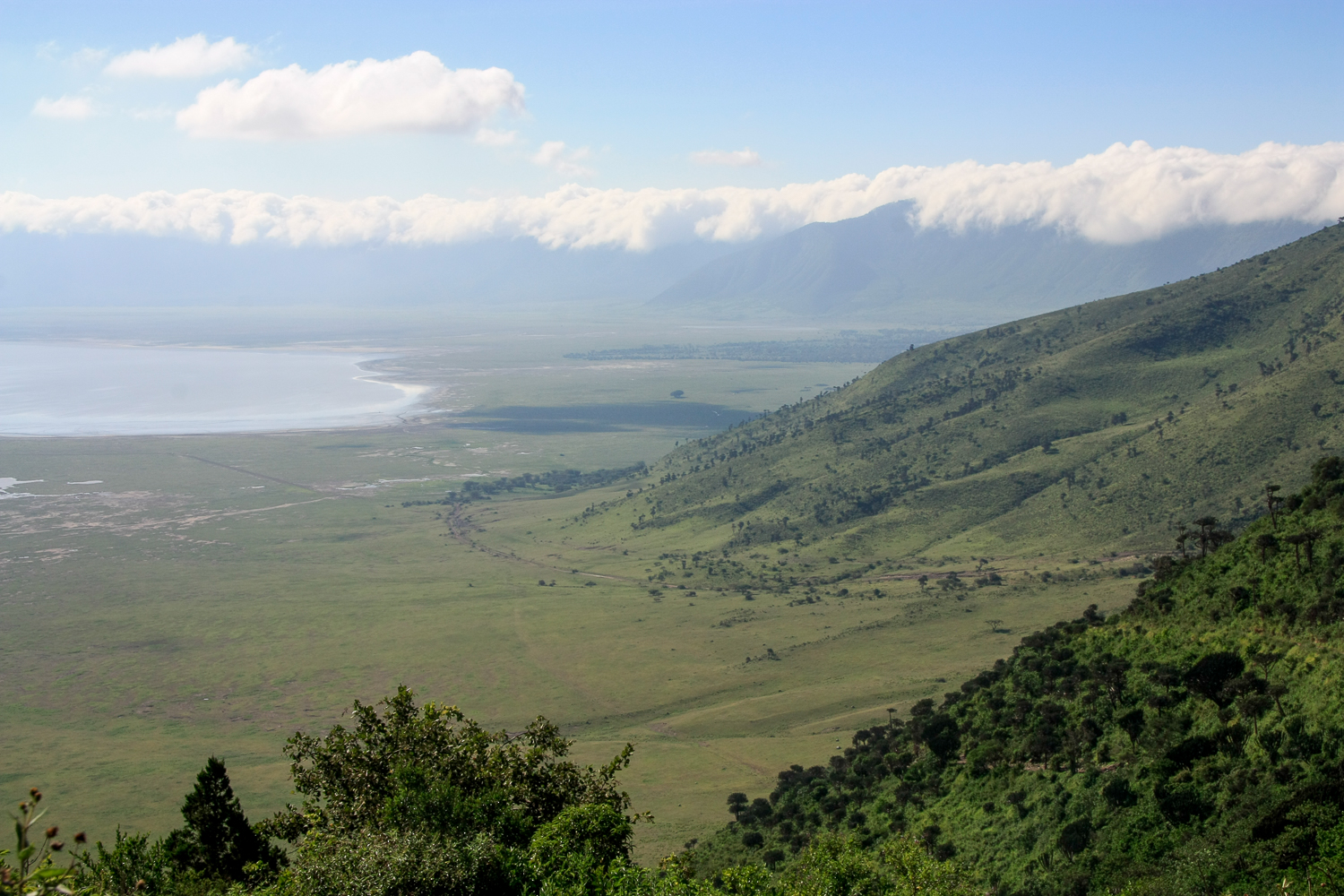 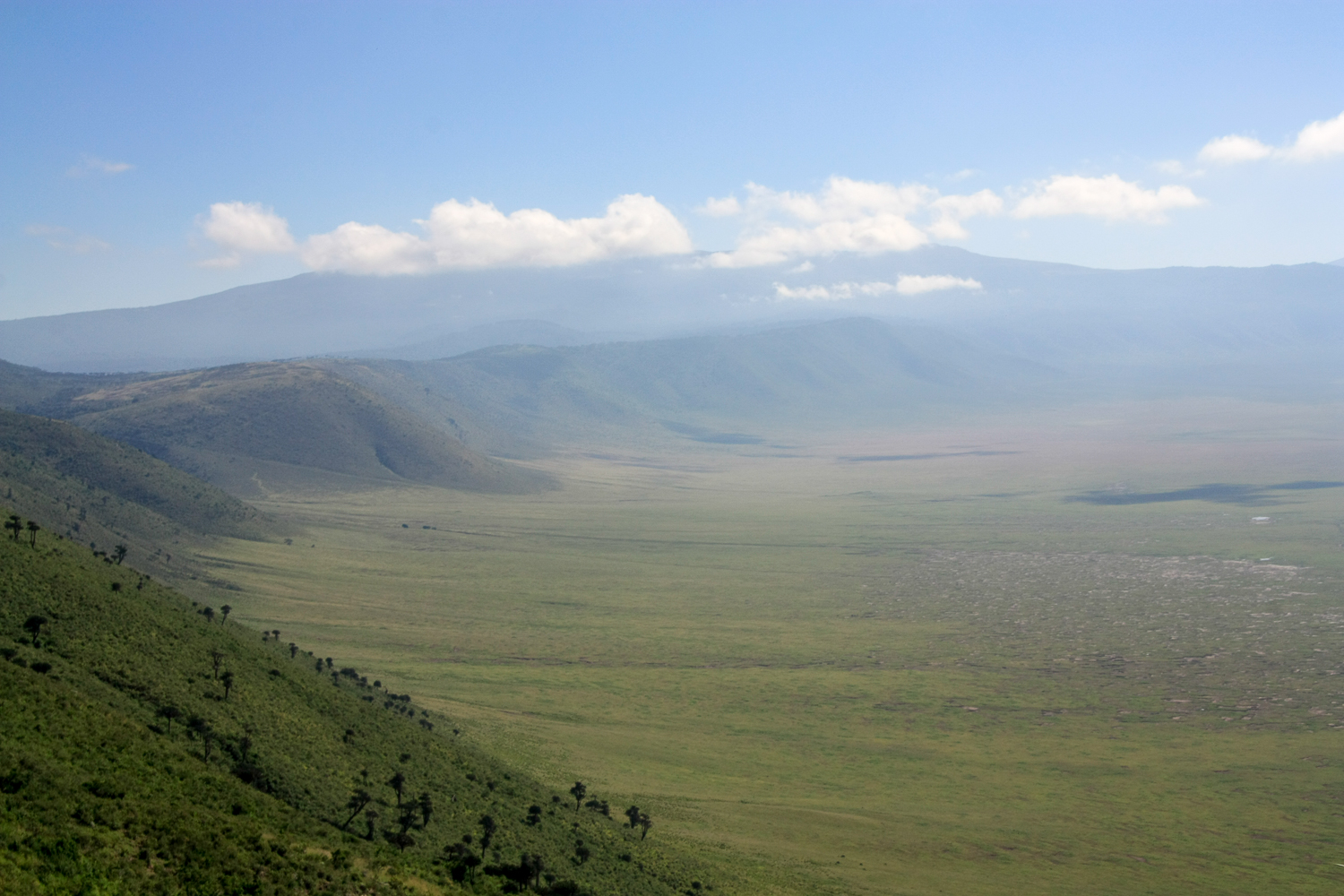 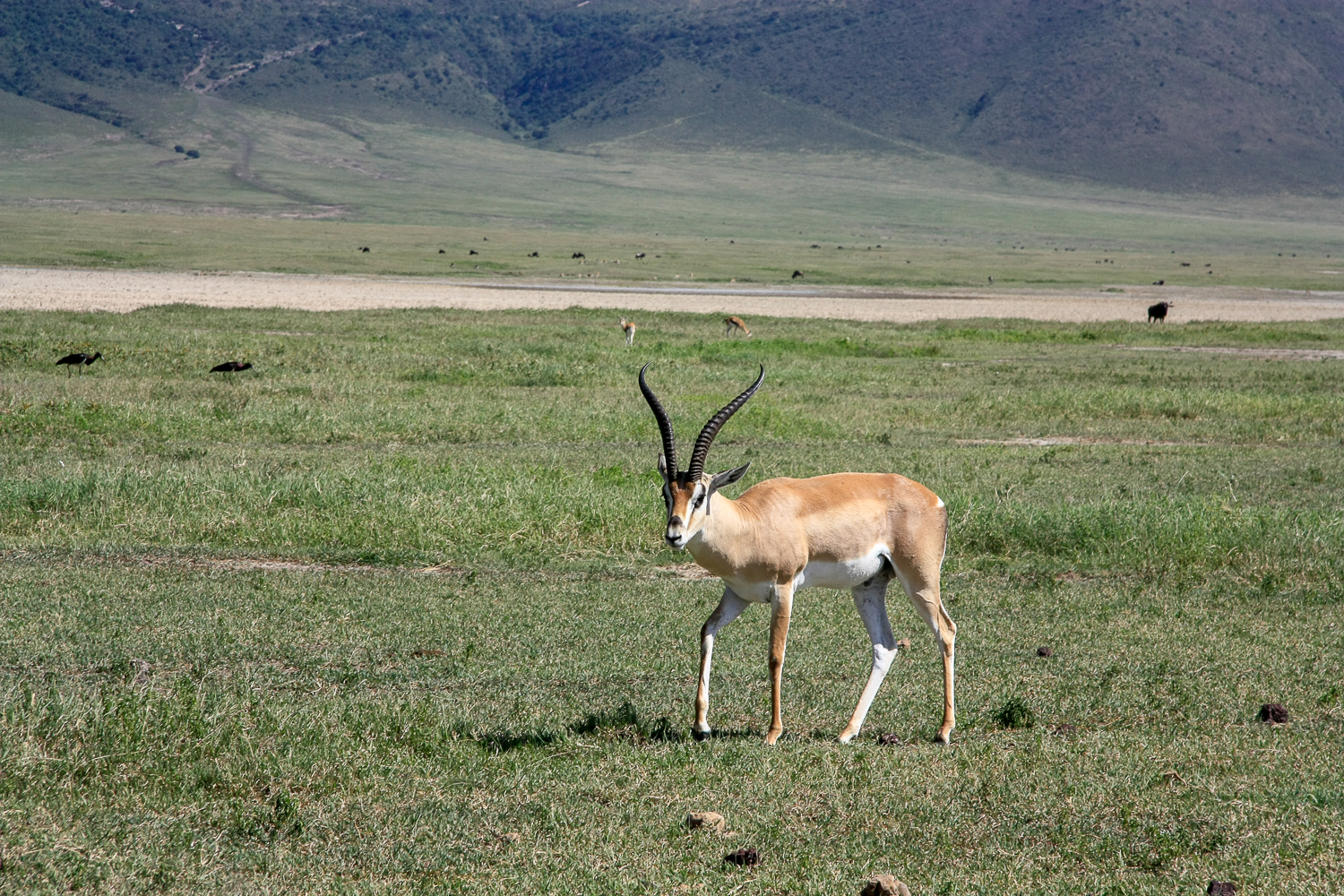 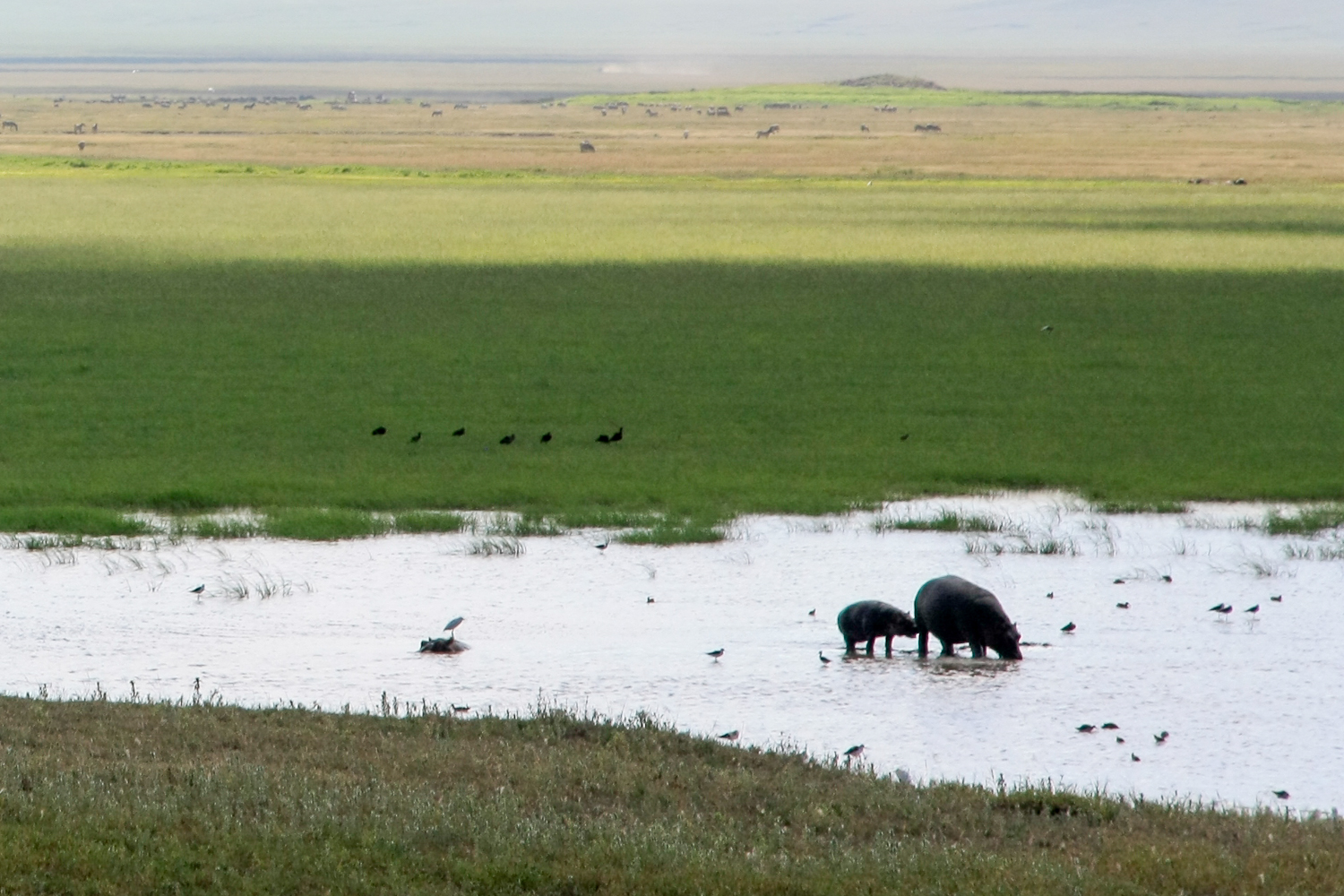 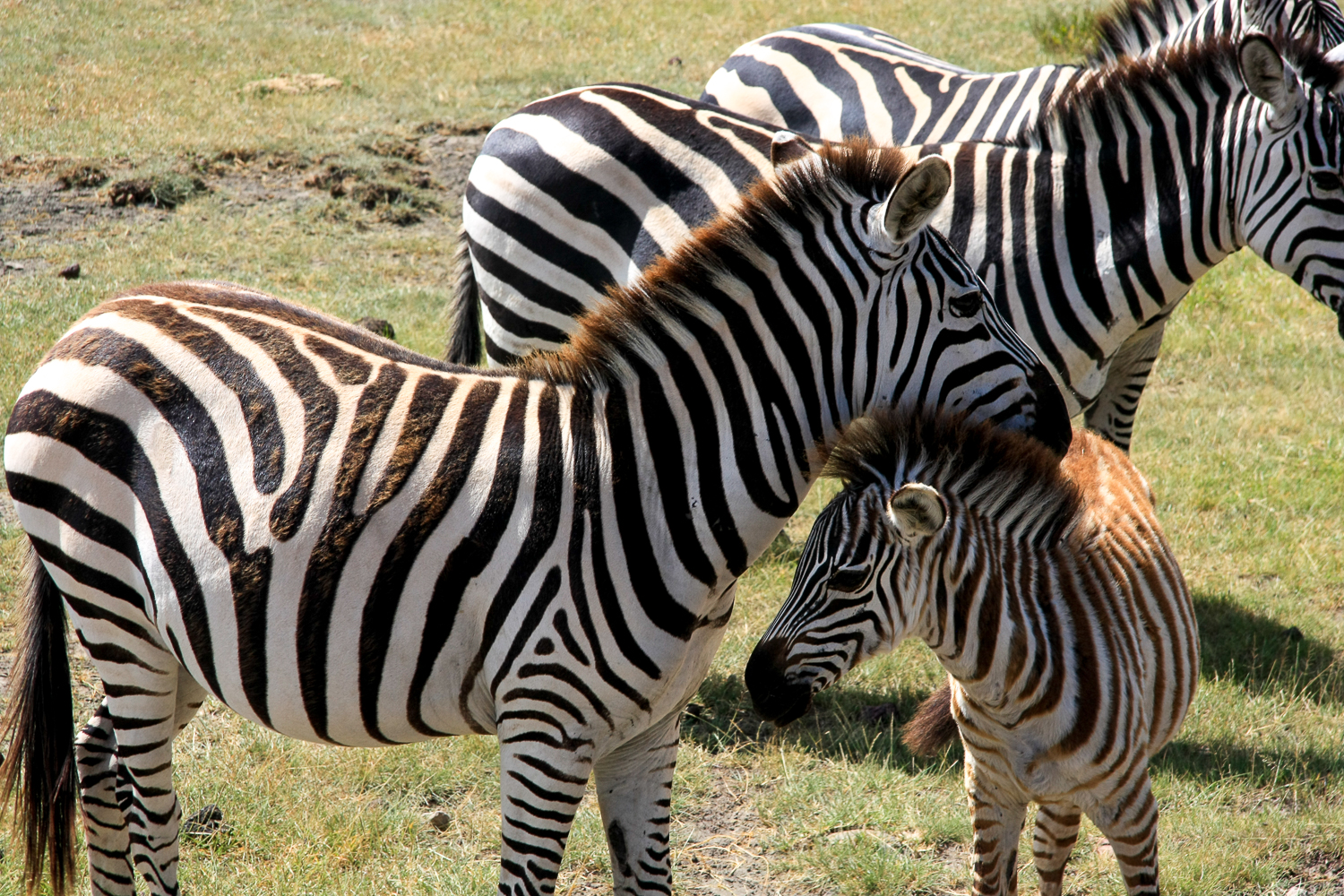 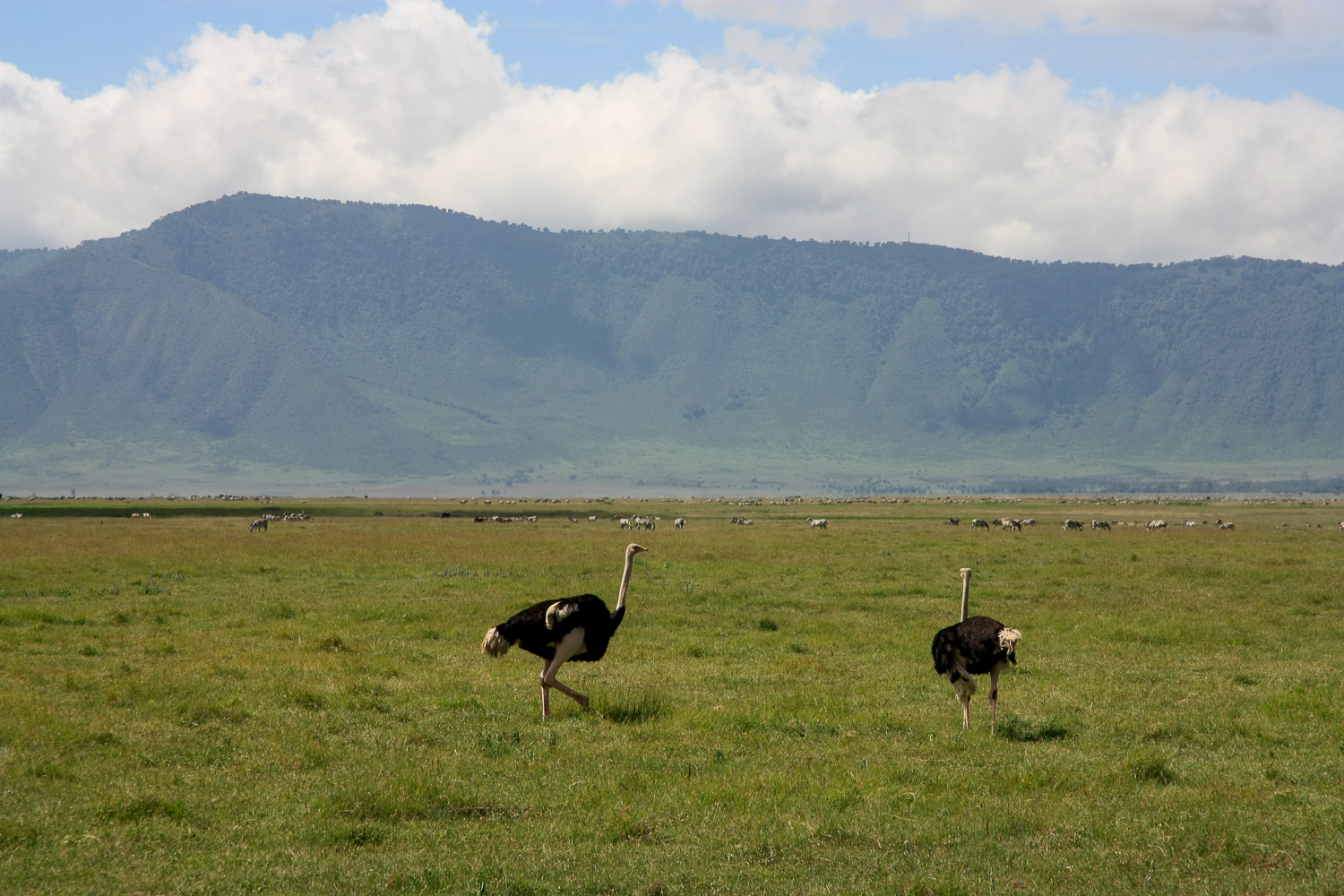 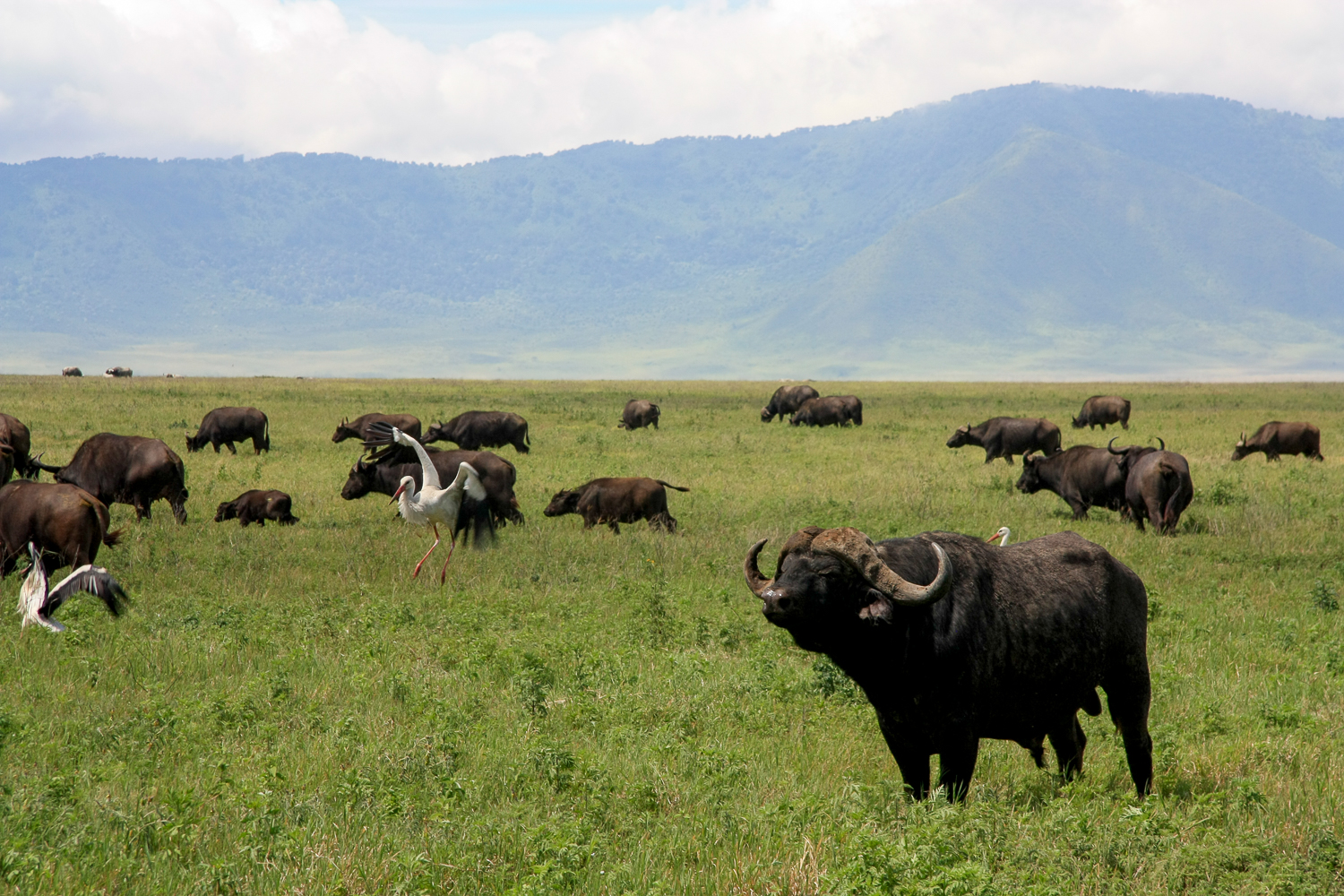 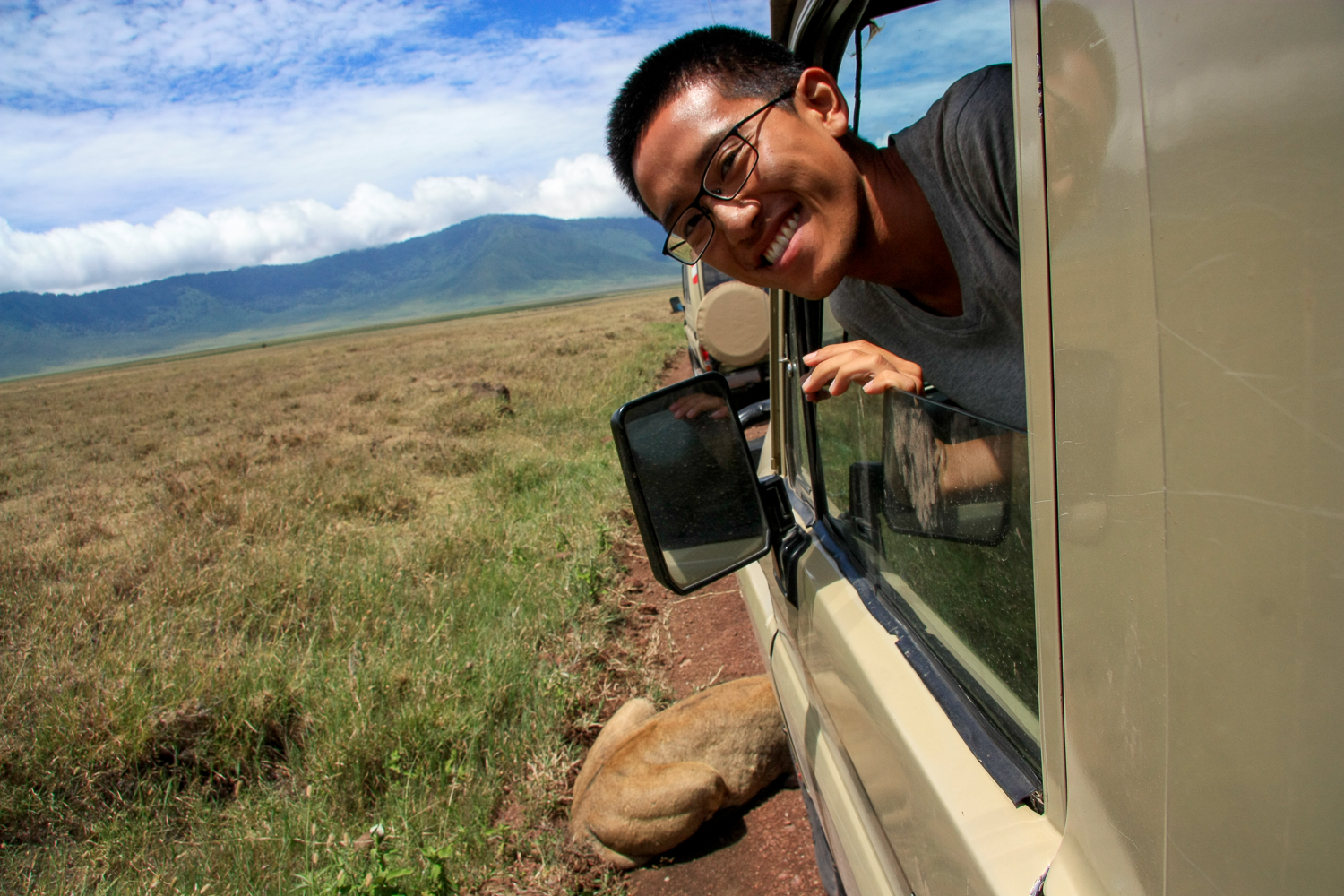 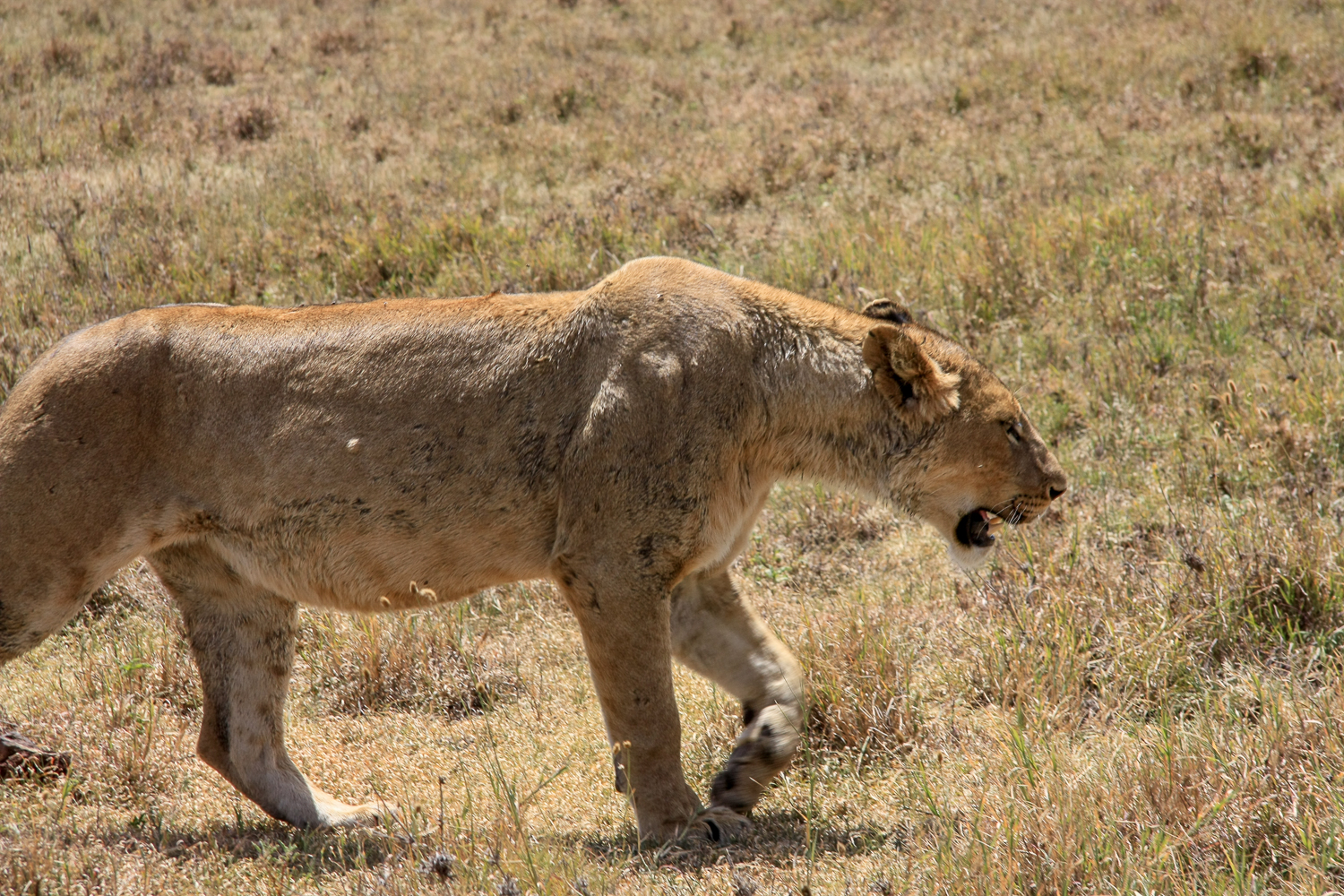 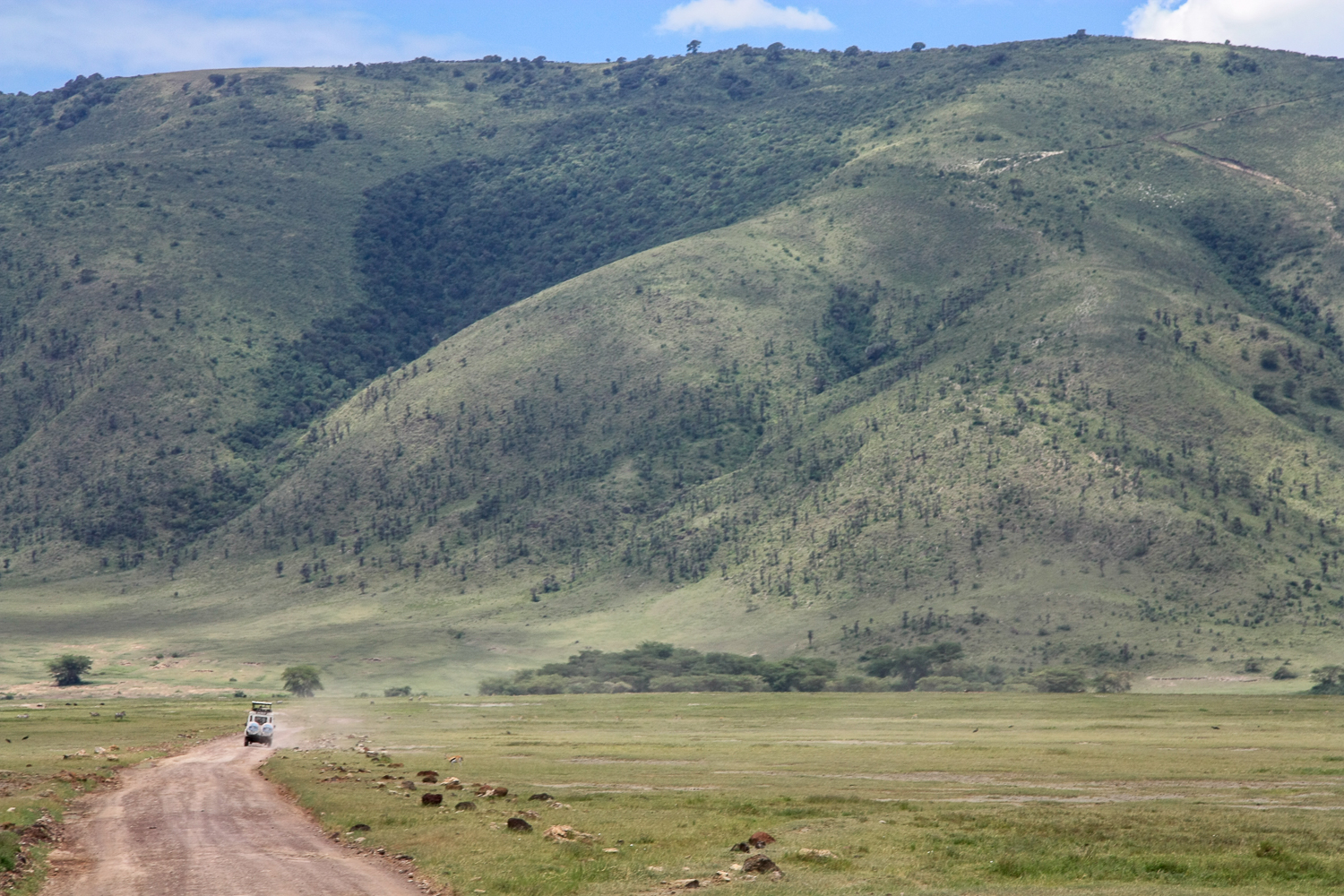 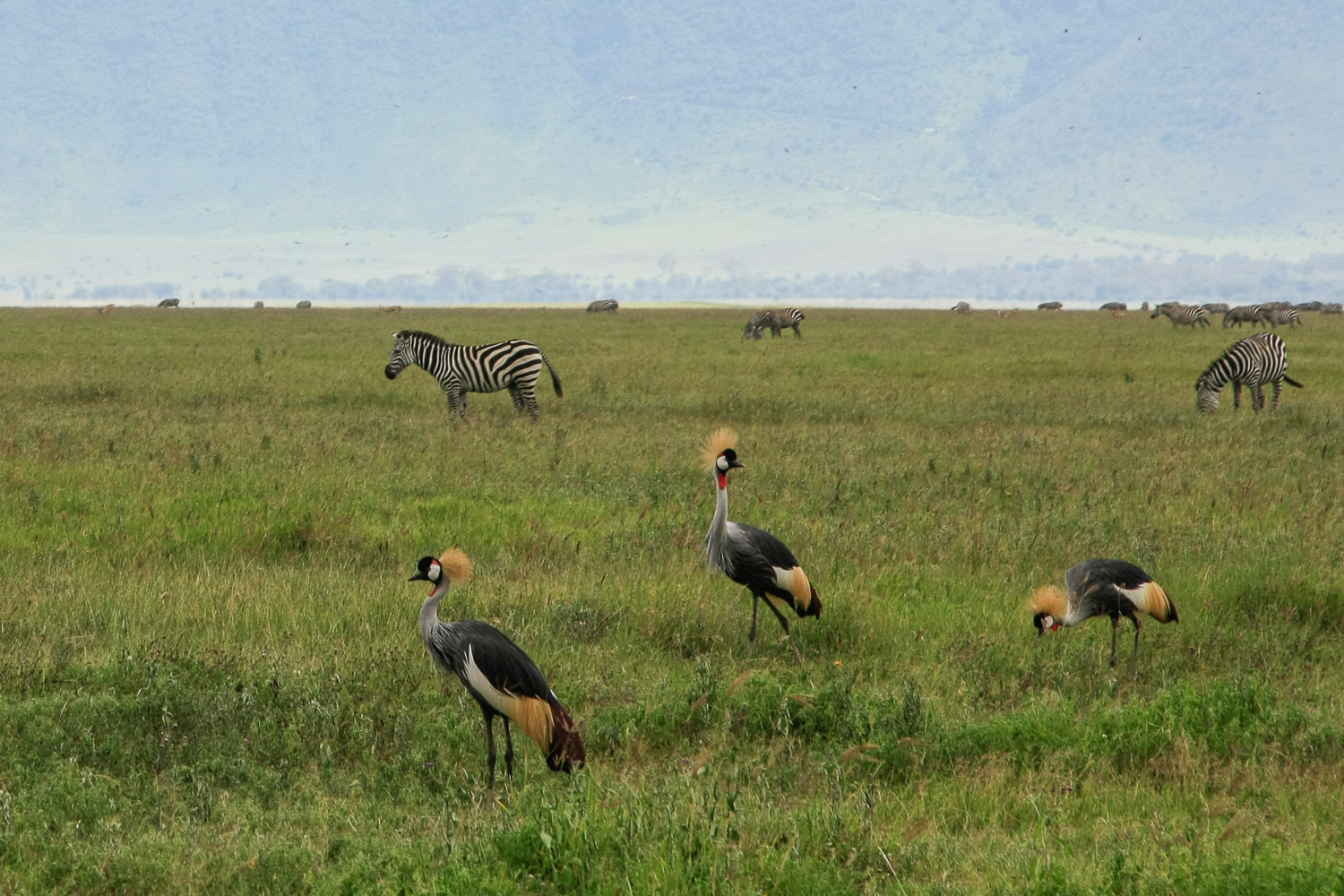 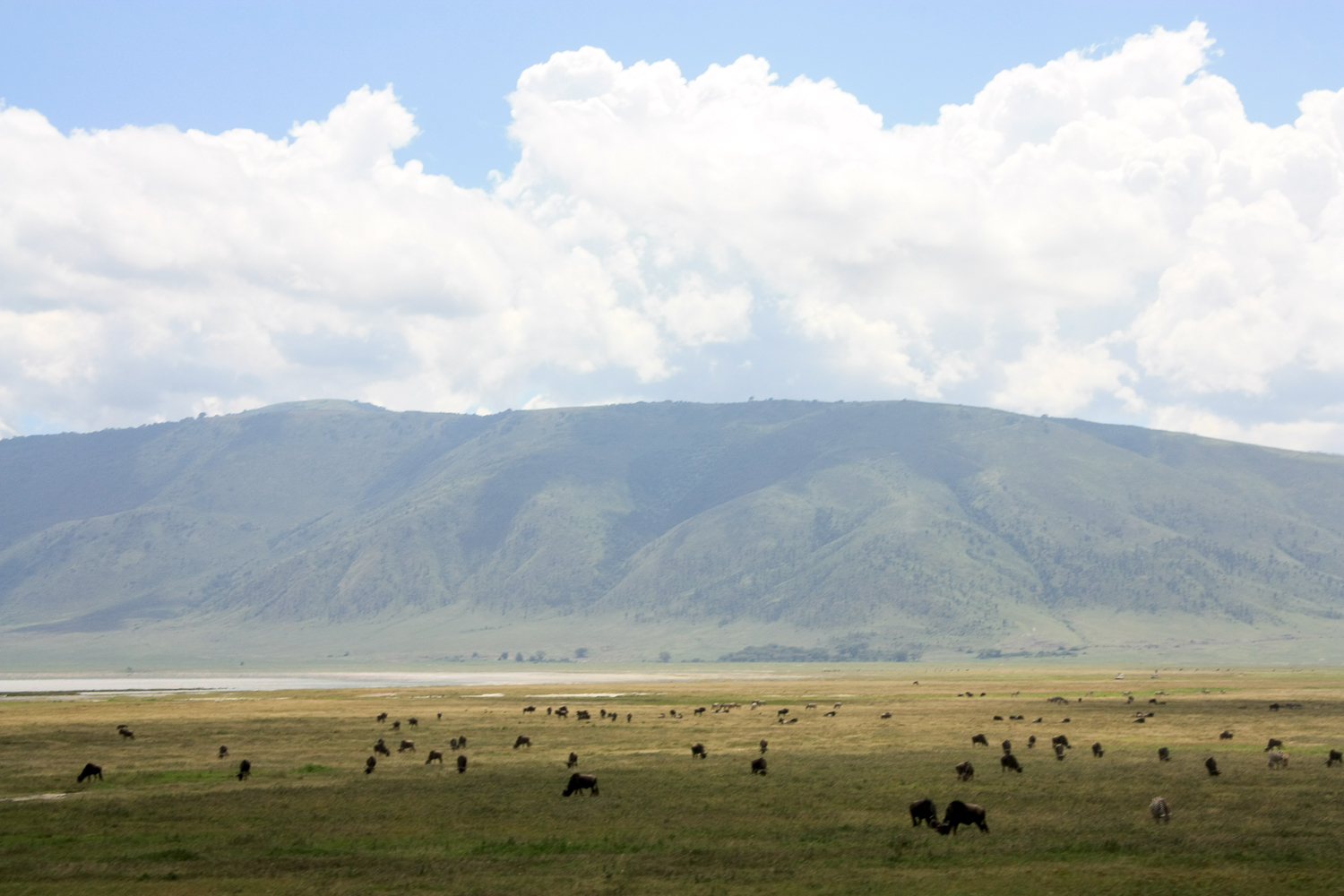 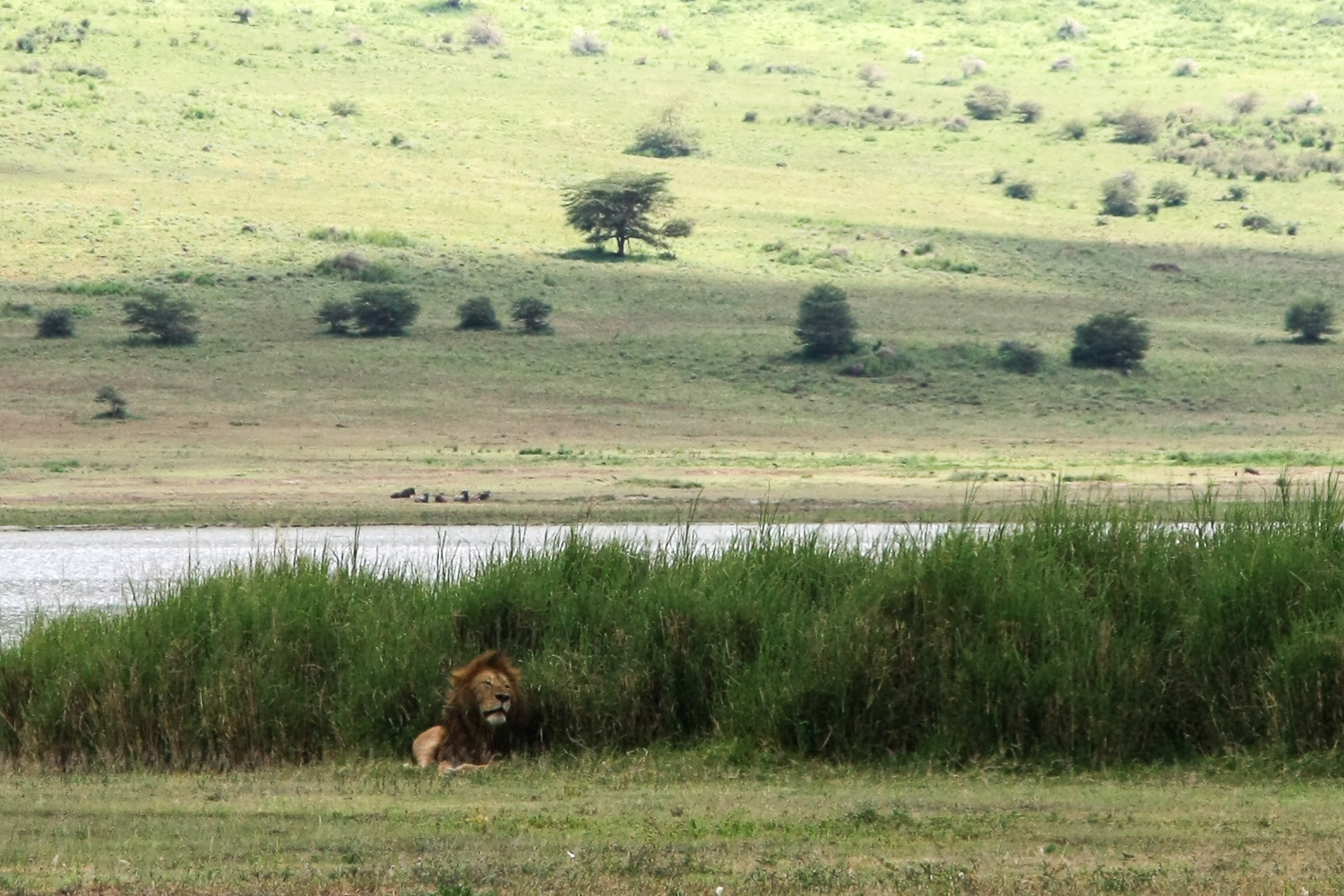 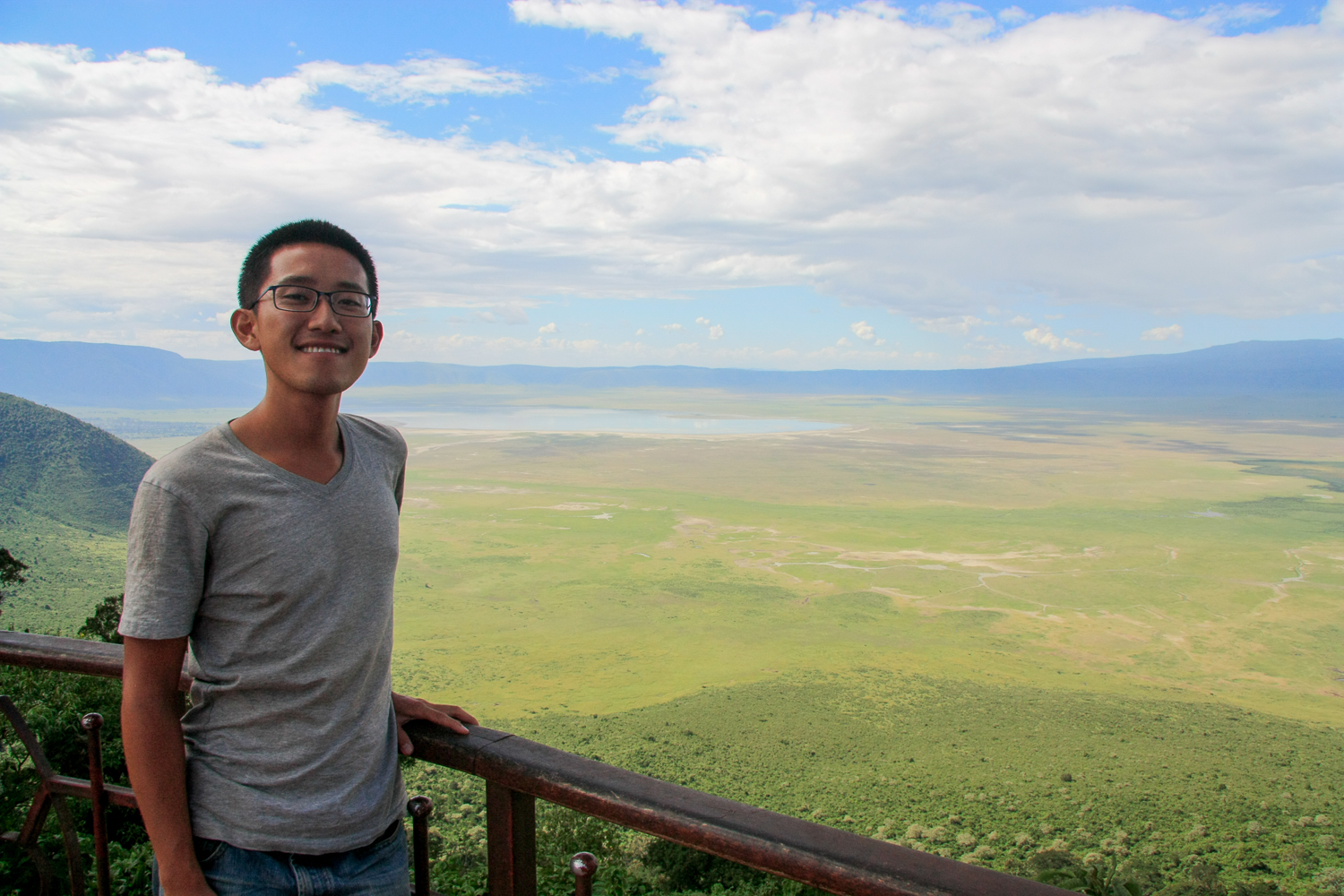 Having arrived in Arusha without a window seat the first time around, the three-hour return journey revealed scenery far more thrilling than the dry flatlands of the western side of the country: dramatic hills, a village market day, and most notably, Maasai people everywhere. While most are pastoralists, Tanzania seems to have far more of them visibly living a more modern life than in Kenya: I’ve already had to squeeze between some of them in dala-dalas, a bit bewildered by the sight of their red or purple robes, piercings and scarifications, shepherd’s staff, and dagger…all the while they blab on cell phones. They’re everywhere in Arusha and the surrounds, enjoying themselves with and just like the “regular” folks; playing checkers or bao in parks, sitting in bars, hopping on piki-pikis (boda-bodas/motos), and generally being… normal? I guess it’s akin to seeing monks in Asia out shopping for electronics: strange, but not strange at all. 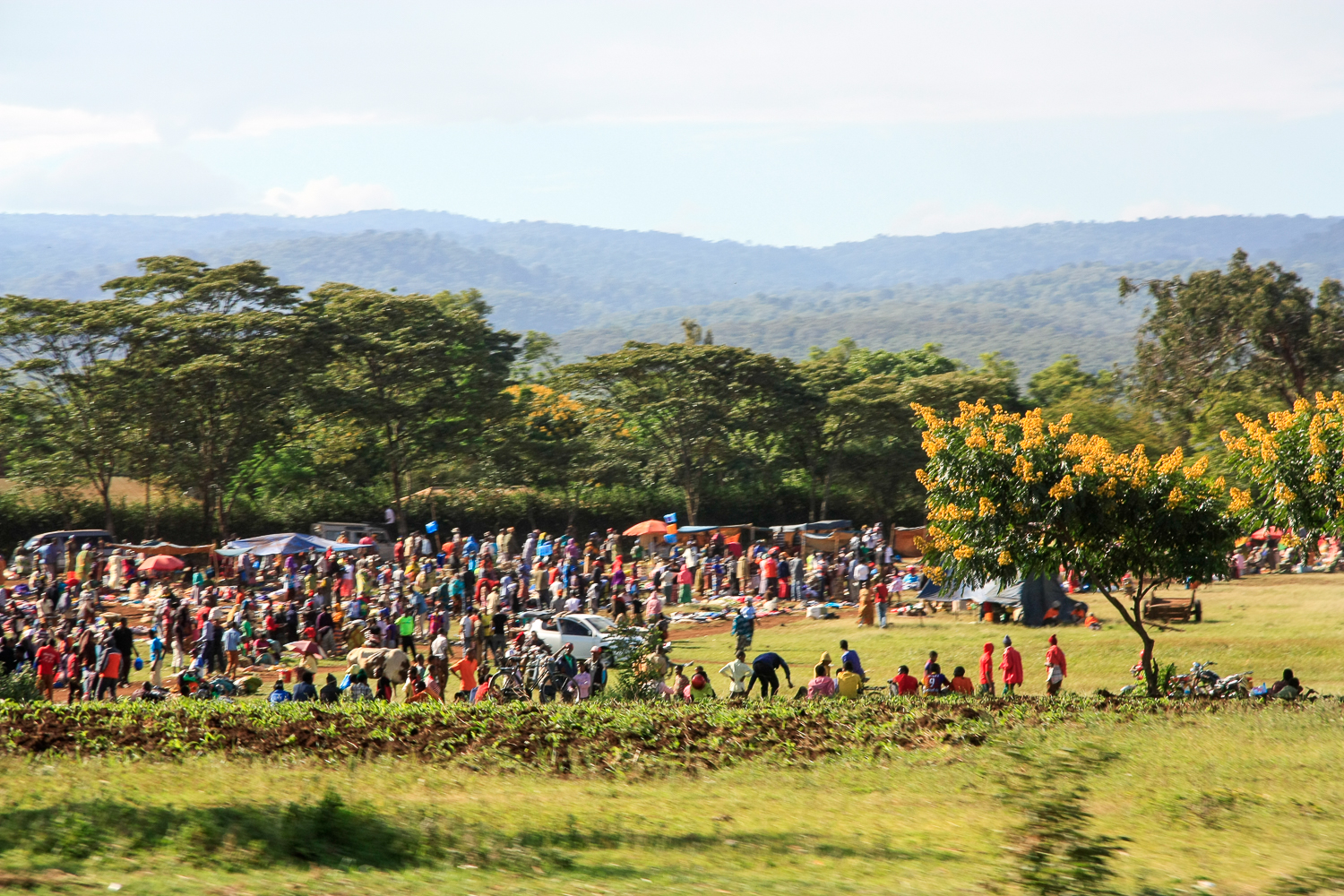 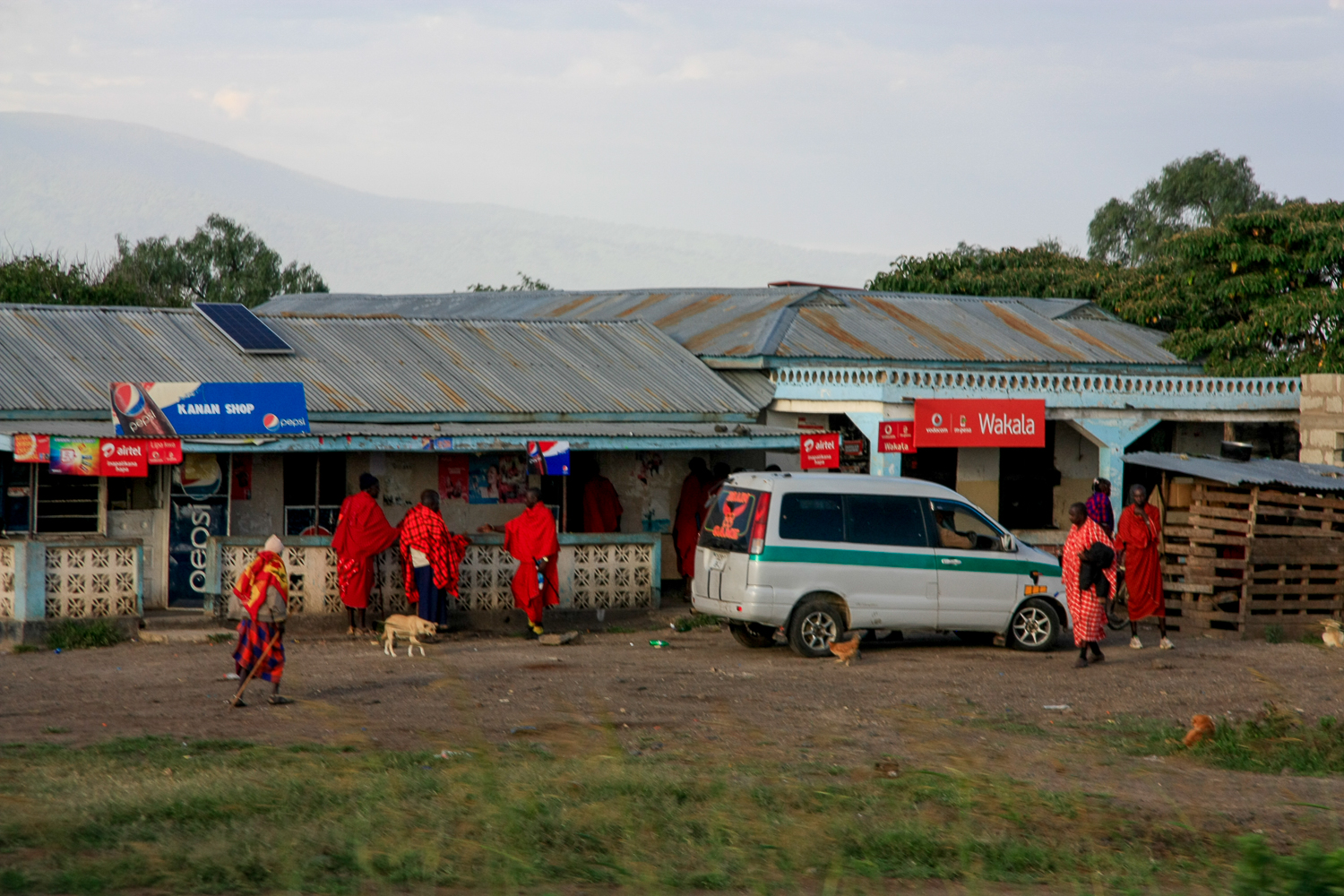 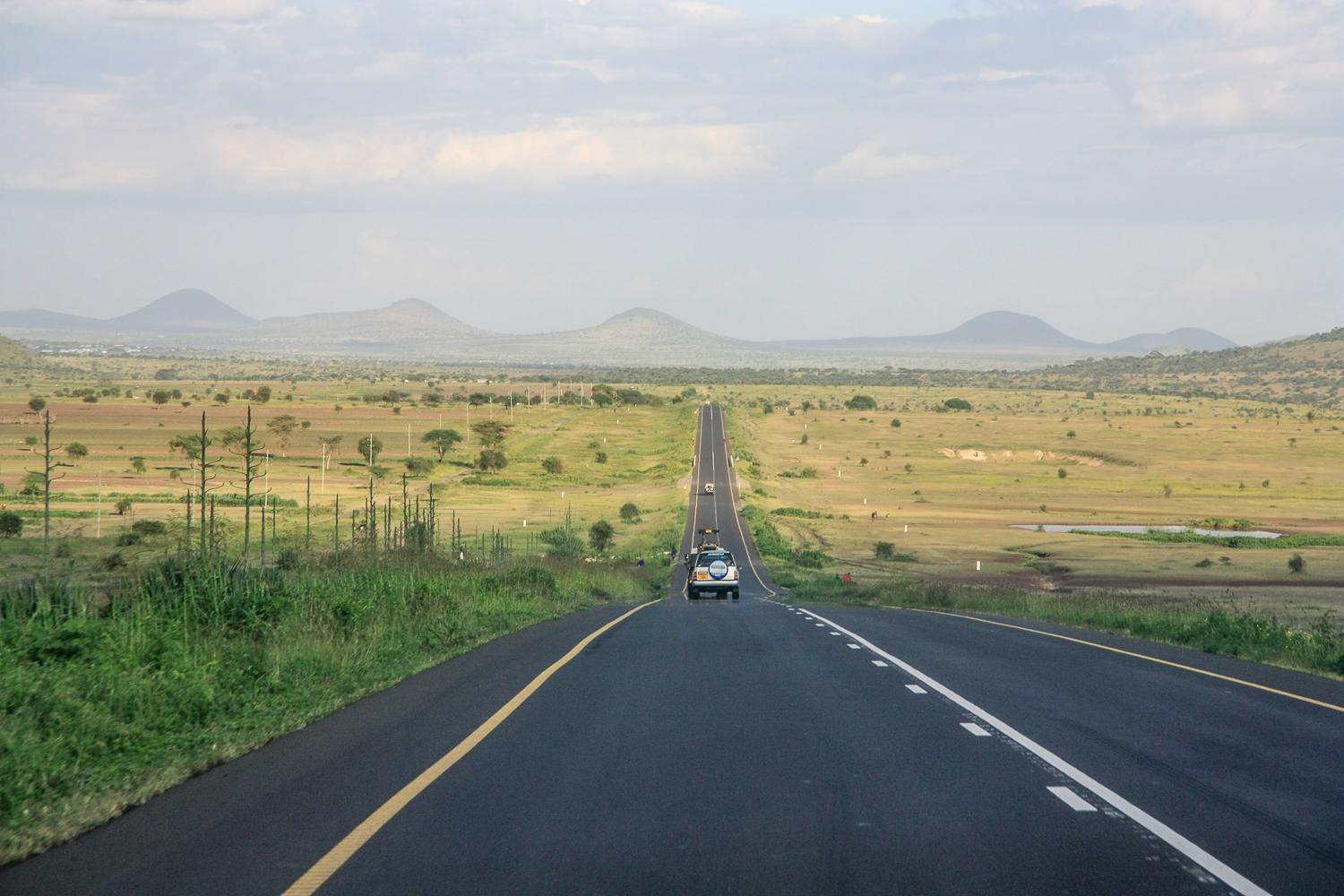 Also visible on the journey back to Arusha: Mt. Meru. It’s huuuuge, and I completely didn’t realise it was there until the clouds parted during the evening. 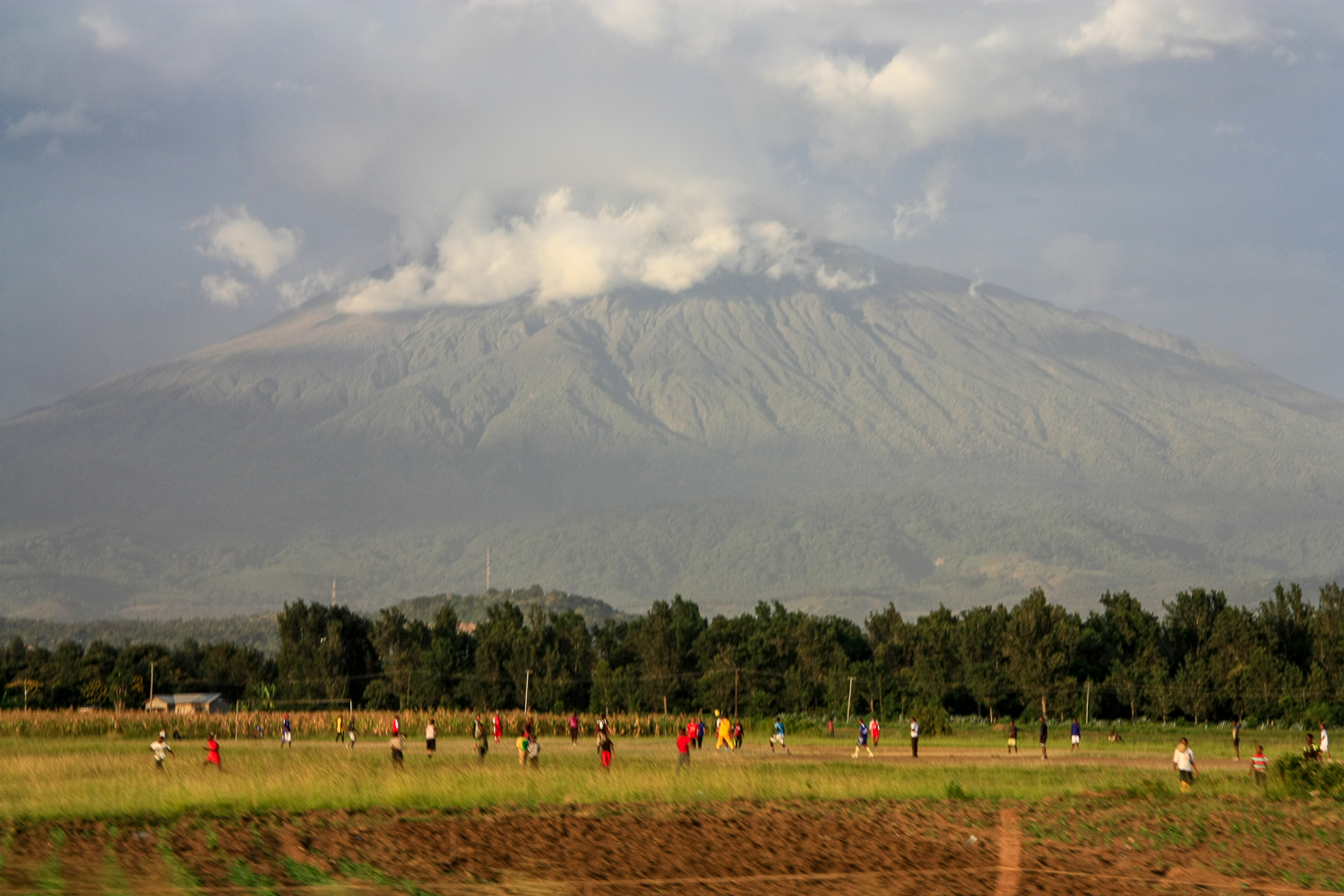 Nonetheless, I continued east and made a stop in Moshi, the closest city to Mt. Kilimanjaro — which, of course, is always shrouded by clouds for all of the day until the evening, if you’re lucky with the weather. And I was! It’s the highest mountain in Africa, and it’s so strange to see a mountain on the equator topped with copious amounts of snow, given how hot it is in Moshi. Before that, in the afternoon, I took another dala-dala to the village of Uru and walked around on the lower slopes of the mountain, where the temperature is quite a bit cooler and the fertile soil amenable to the many family banana plantations and gardens in the area. (And again, despite being in a distinctly untouristy place — welcoming but untalkative people, even the schoolchildren who chased me down briefly!) Again, so strange to see bananas growing not far from a cold, barren, snow-covered peak. 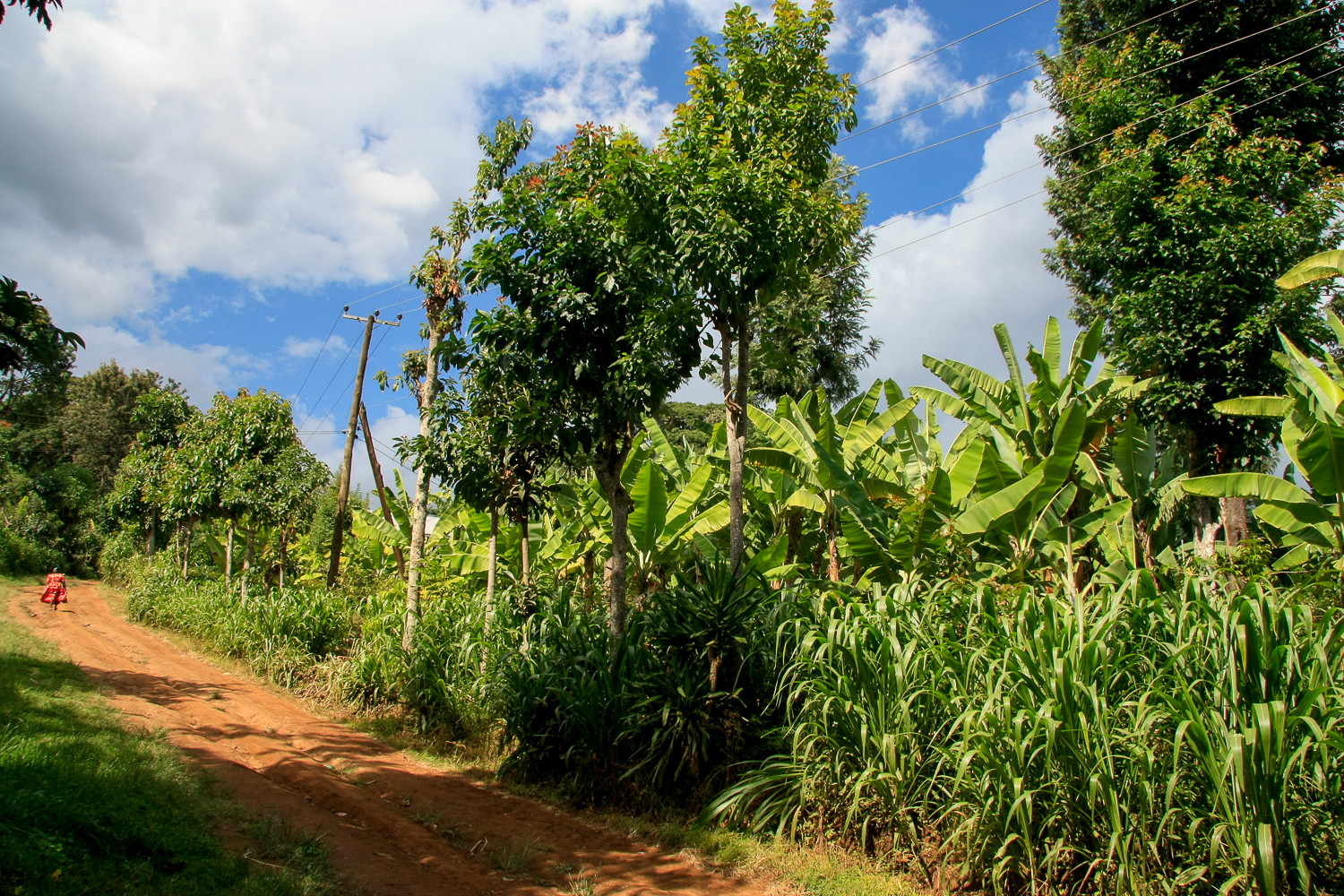 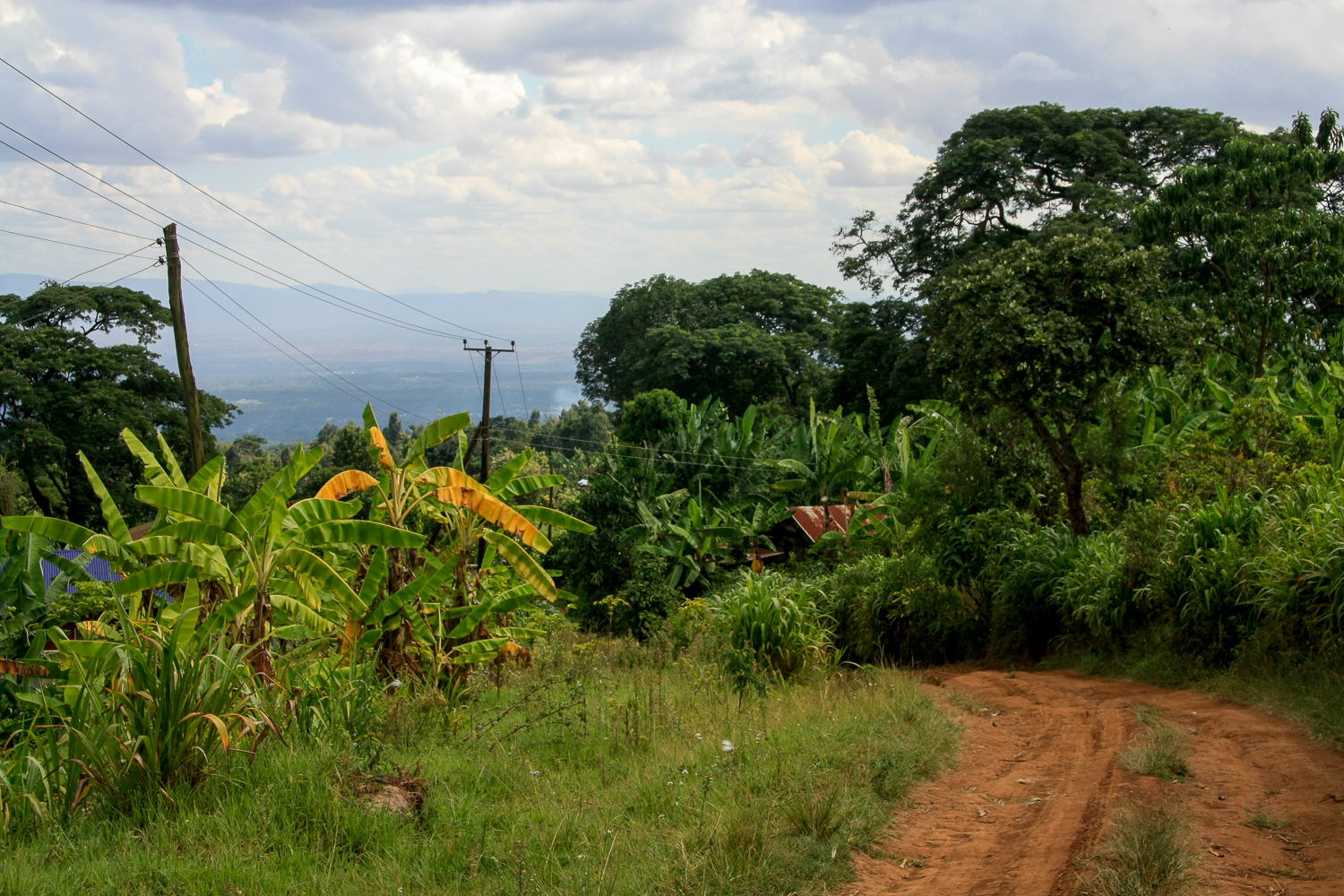 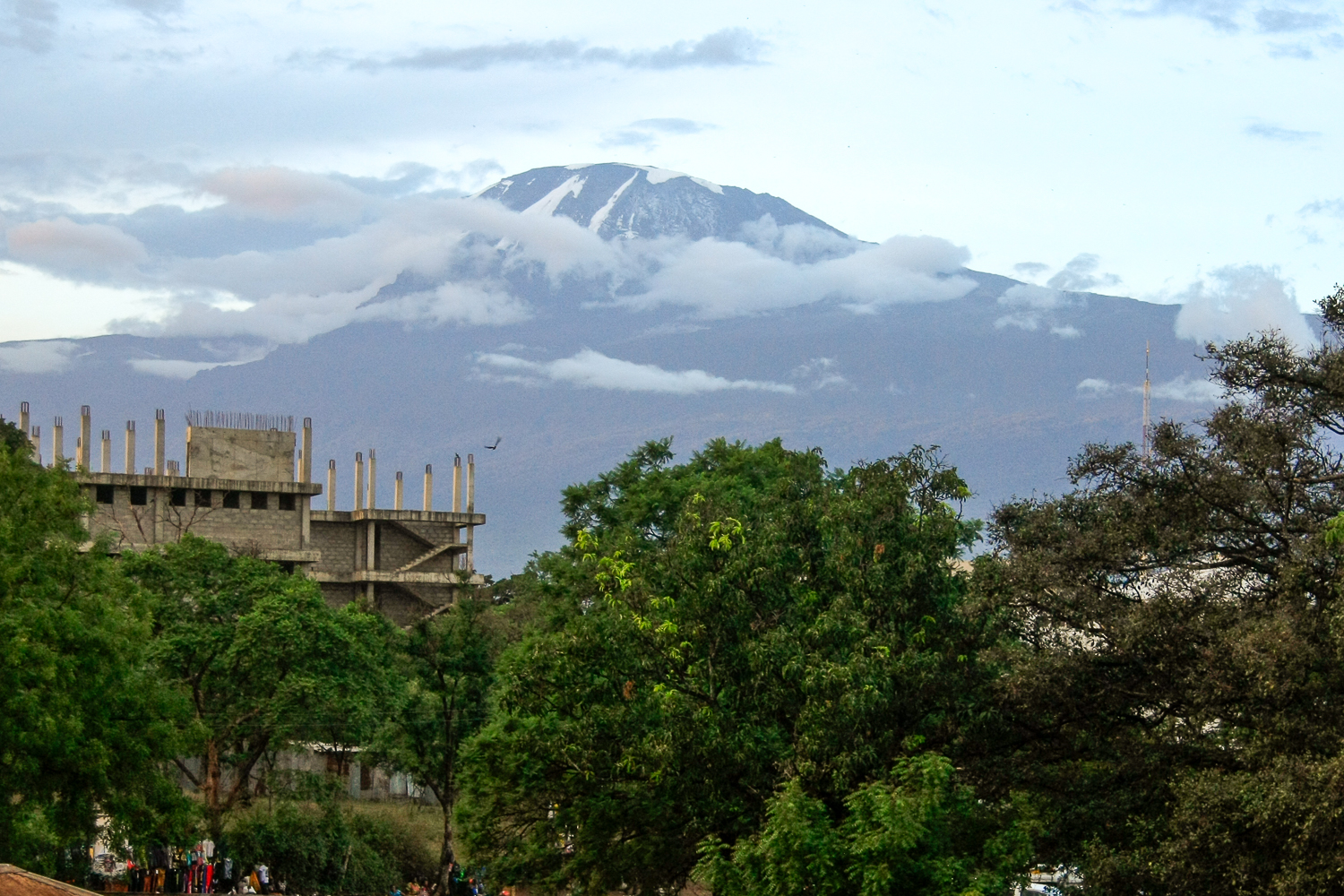 I made a beeline the next day to Dar es Salaam (which is *not* the capital; that would be the much-smaller city of Dodoma), which is a large city without much of note. (Even more so than Arusha and Moshi, which are really visited only for their proximity to nature sights.) Well, at least I had a window seat on the way over! 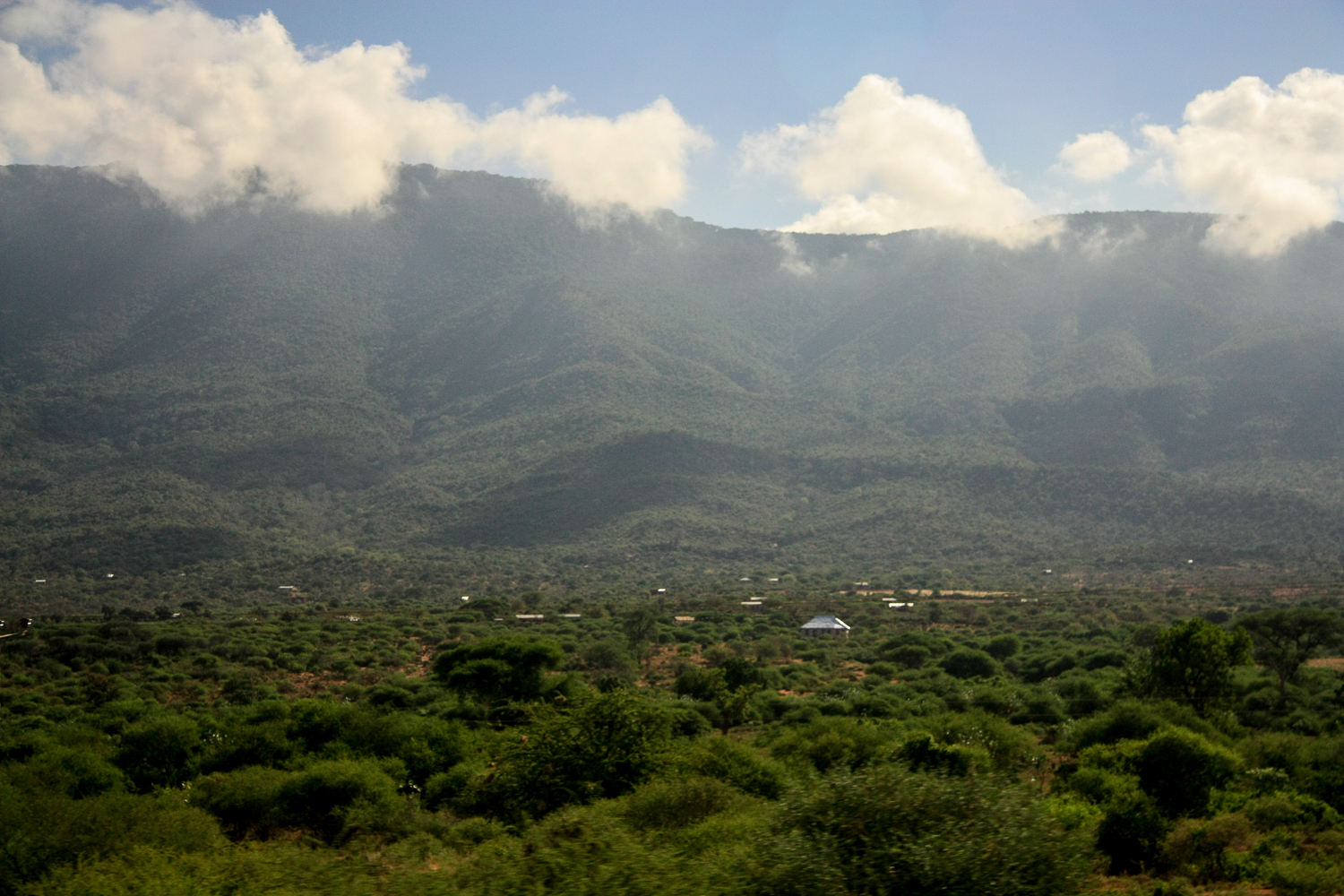 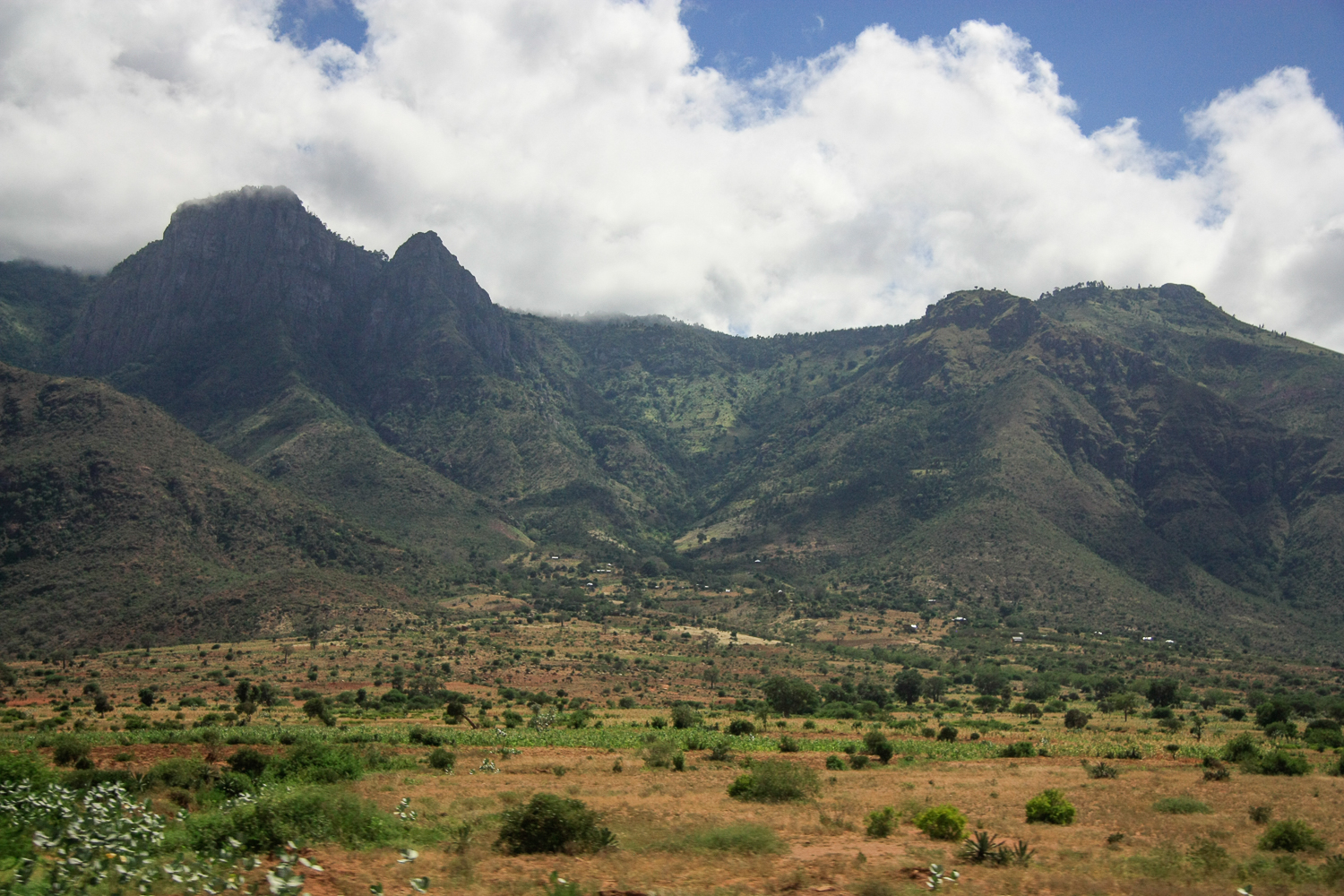