Despite being a sliver of an island (along with even tinier ones under its jurisdiction) completely dwarfed by the mainland, Zanzibar has a special status within Tanzania. After all, it used to be an independent country until it joined up with Tanganyika (the mainland) to form Tanzania. With a fabled trade history of its own and a Swahili culture that isn’t just limited to speaking the language, it feels entirely distinct. Even the people look different — many people of Arab (Zanzibar was a sultanate until its revolution) and Indian descent (Indians were British subjects at the time Zanzibar was a British protectorate) continue live here, and many have intermarried with the indigenous population, meaning people here have wildly varying skin colours and builds. And while mainland Tanzania has a pretty large Muslim population already, something like 99% of Zanzibaris are Ibadi Muslim. Every woman’s wearing a veil and/or niqab, and most men are wearing a hat. So yes, like the culturally similar Mombasa in Kenya, but far more concentrated.

Stone Town is a joy to wander, absorb, and take in. Buildings dating back to who-knows-when are all designed with Swahili architecture, with ornate doors, arches, windows, and awnings. Even refurbishments and new buildings all carry the same design philosphy. The town is a mess of disorganised and cramped alleys blocked off by tall buildings, which provides shade from the unrelenting heat but makes you walk in it for longer anyway since you’re bound to get lost a million times. (I never stopped sweating from the moment I got to the island, day or night.) 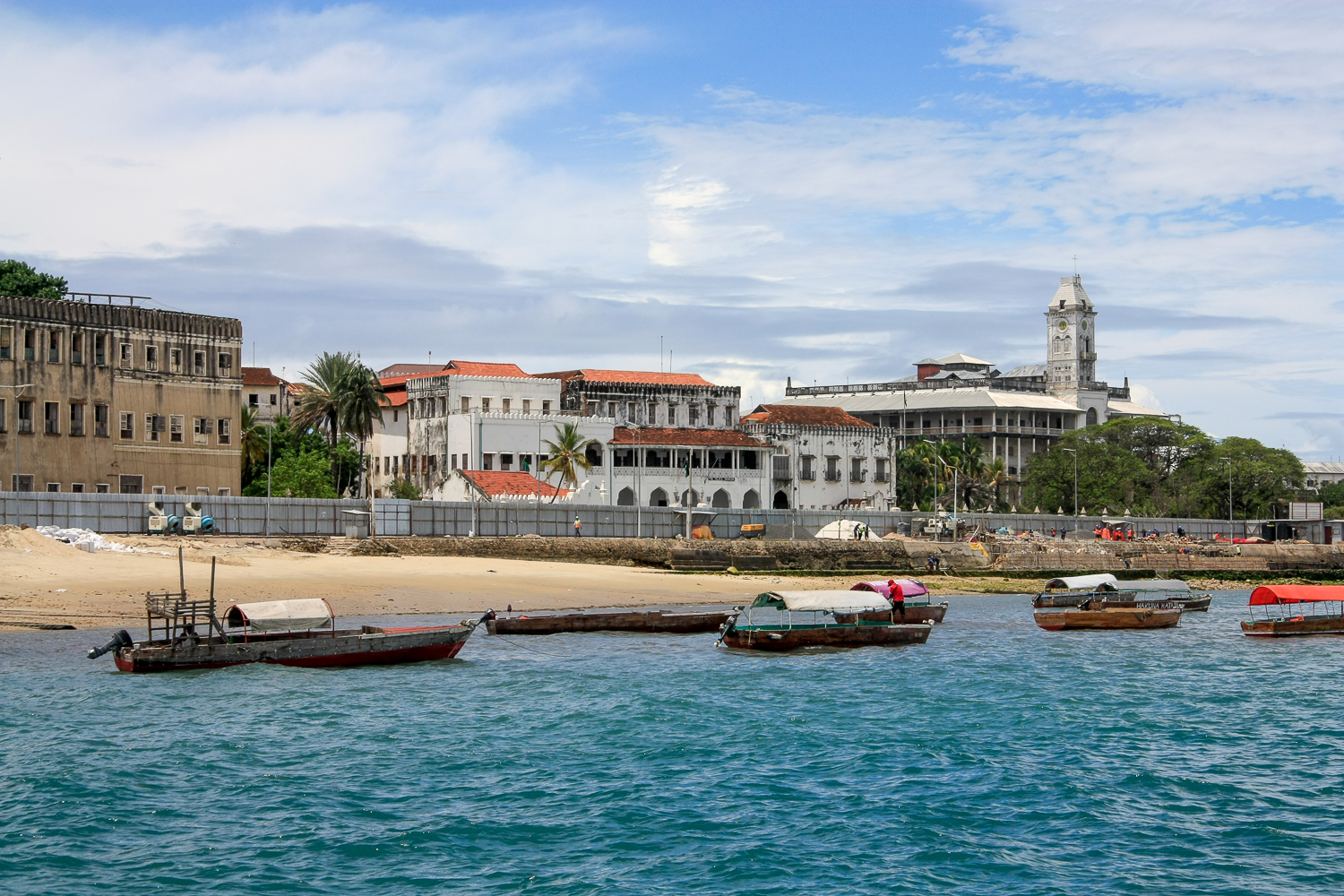 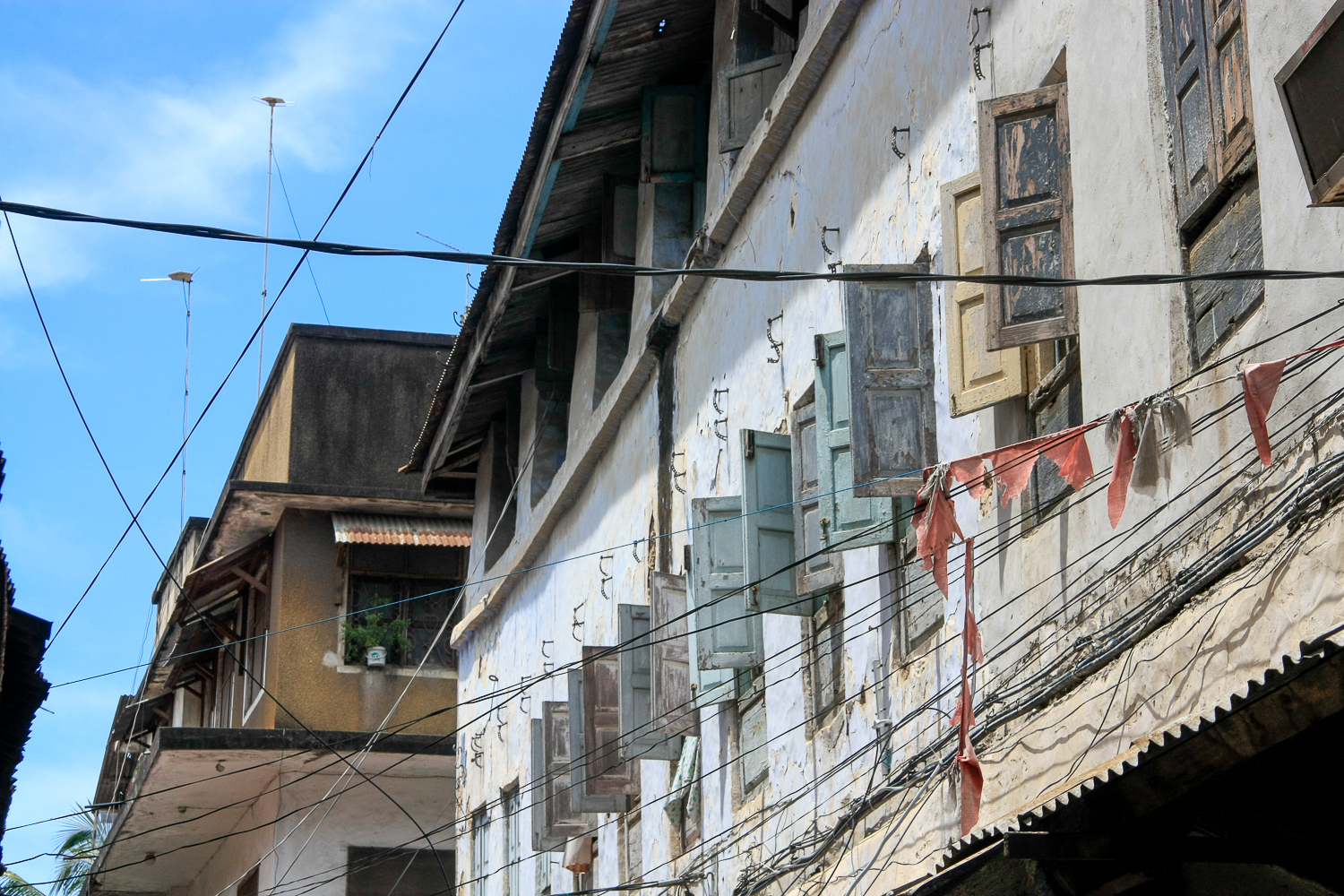 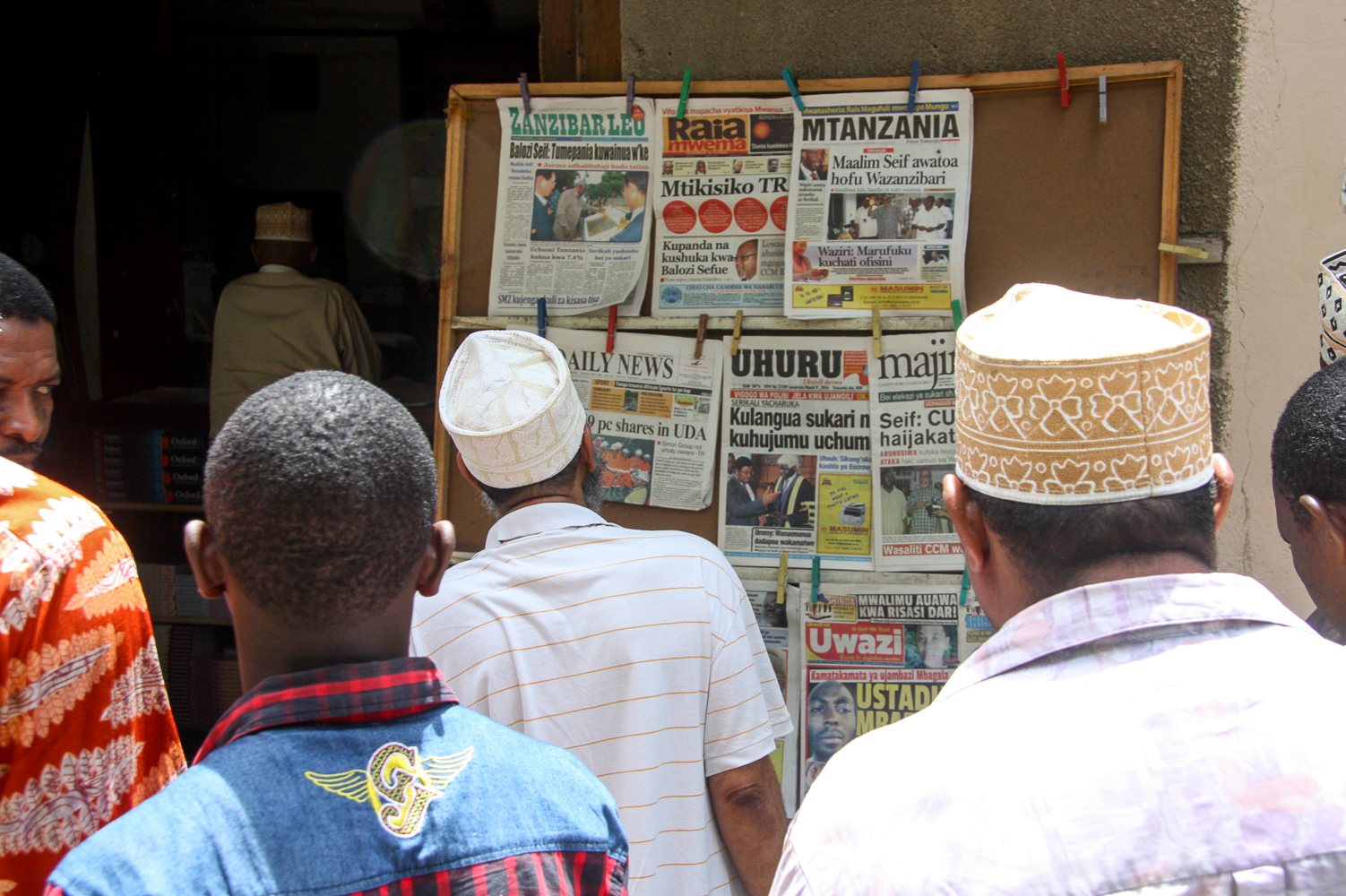 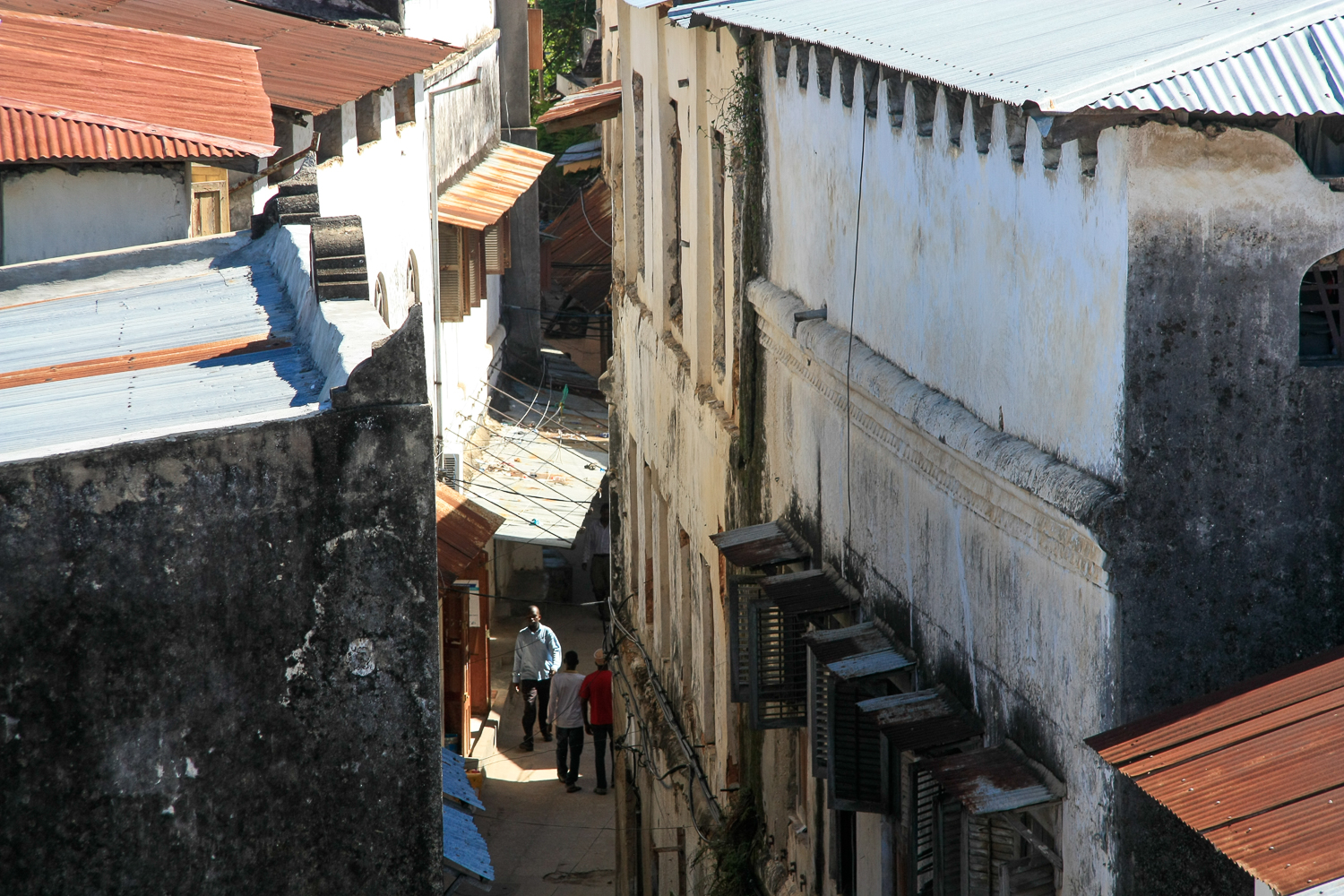 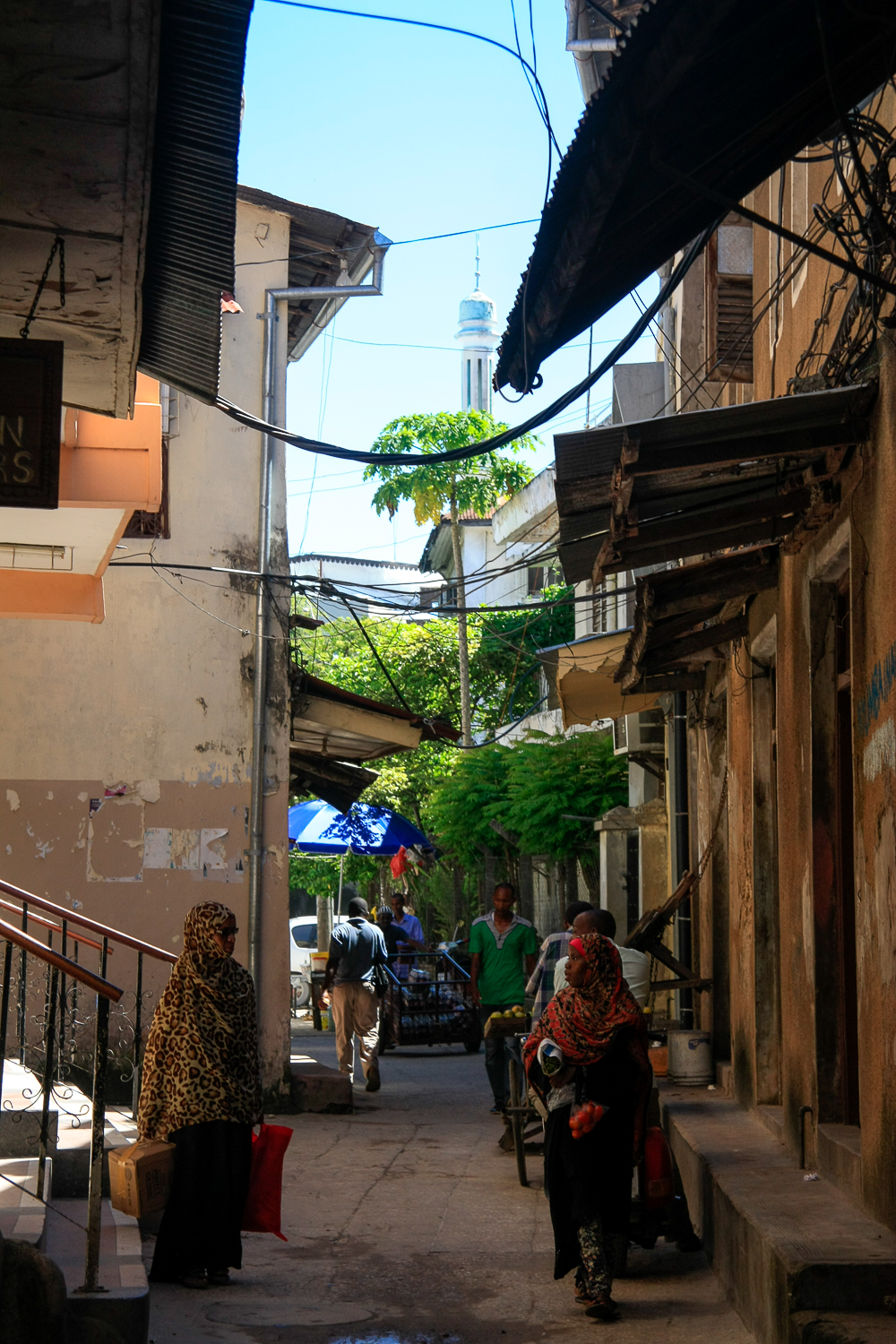 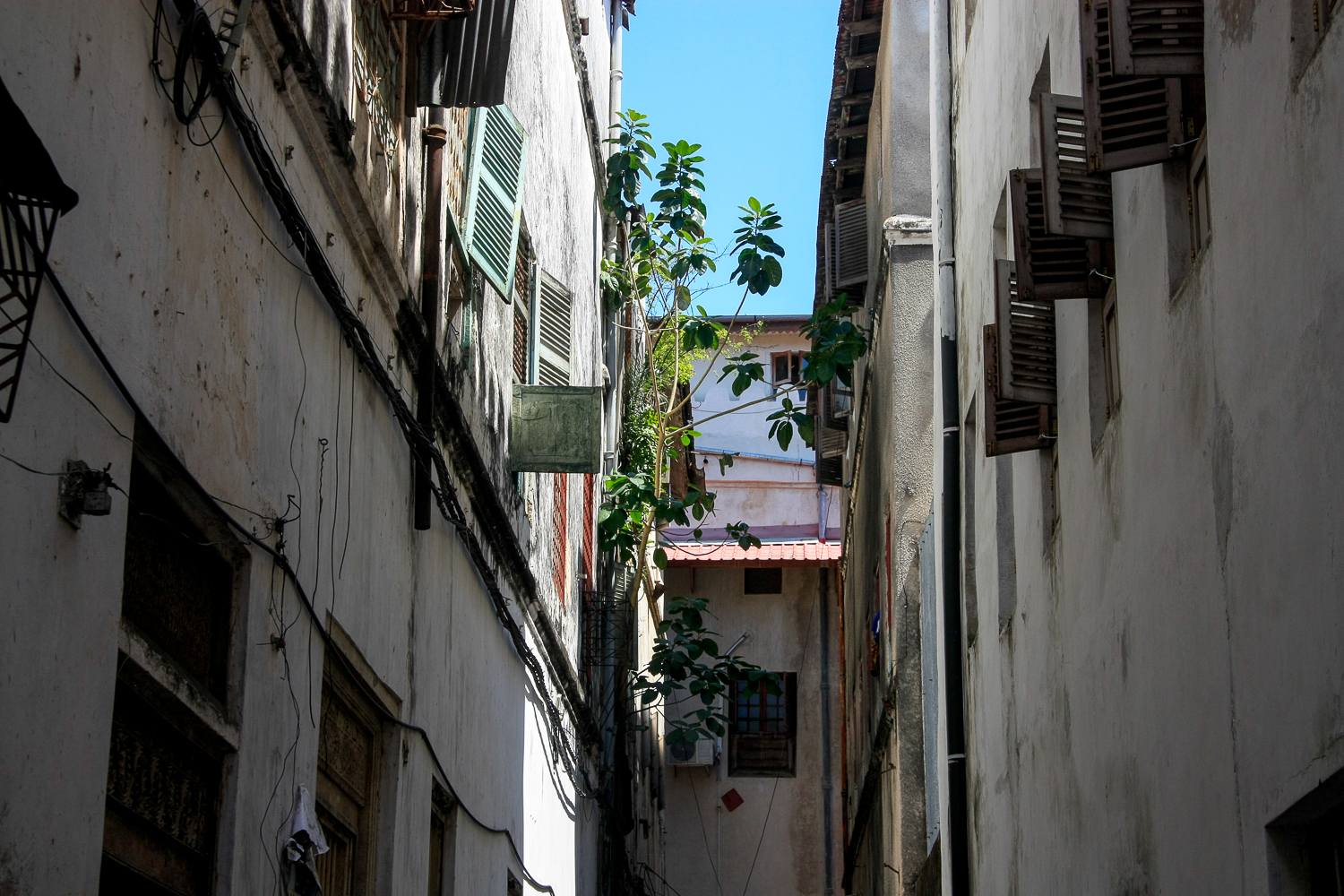 But the old town isn’t just a relic, it’s still fully functioning as if nothing had ever changed. Even despite the mass tourism now on the island, simply turn a corner and it’s as if you’ve gone back in time. Children are walking to and from school, women are outside chatting while preparing some food on the street, whether for their families or just to be sold; men are pushing carts overloaded with stuff through narrow passageways. Two-wheeled traffic careens its way through the same passageways, beckoning everyone out of the way. Local restaurants and joints to cool off are filled during the midday heat, with local friends and strangers chatting away over tea, juice, yoghurt, the local non-alcoholic ginger beer, or pine nut soda(?!). The sprawling market may just be my favourite one in Africa — sure, there are some touristy sections, but then it’s total organised chaos, with fish for sale in the market hall, produce outside of it, and everything else under the sun — home electronics, clothes, perfumes, candies, car parts, tools, scooters… — sold in the many surrounding streets. It’s loud, it’s colourful, and most of all, completely accessible: people were welcoming. 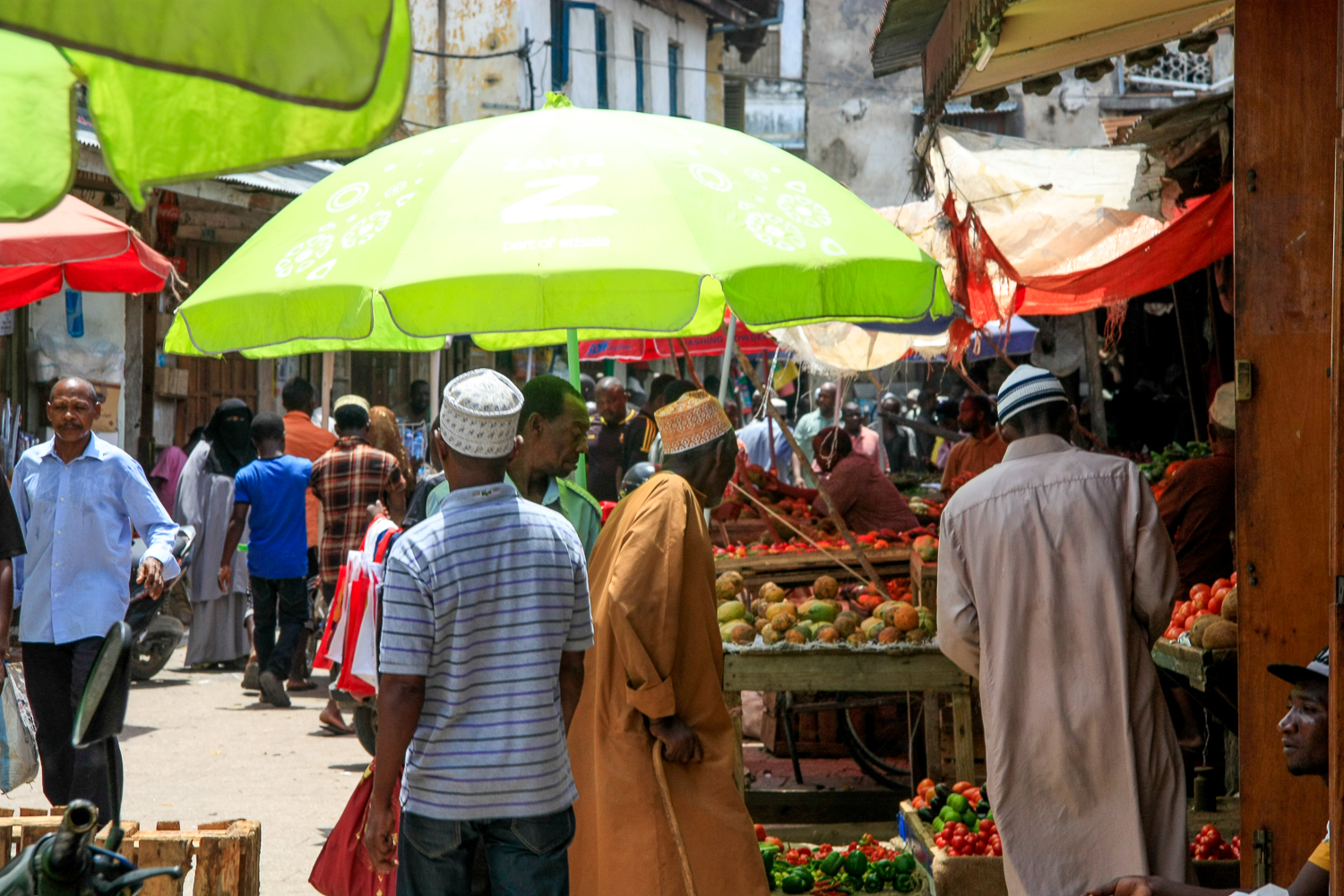 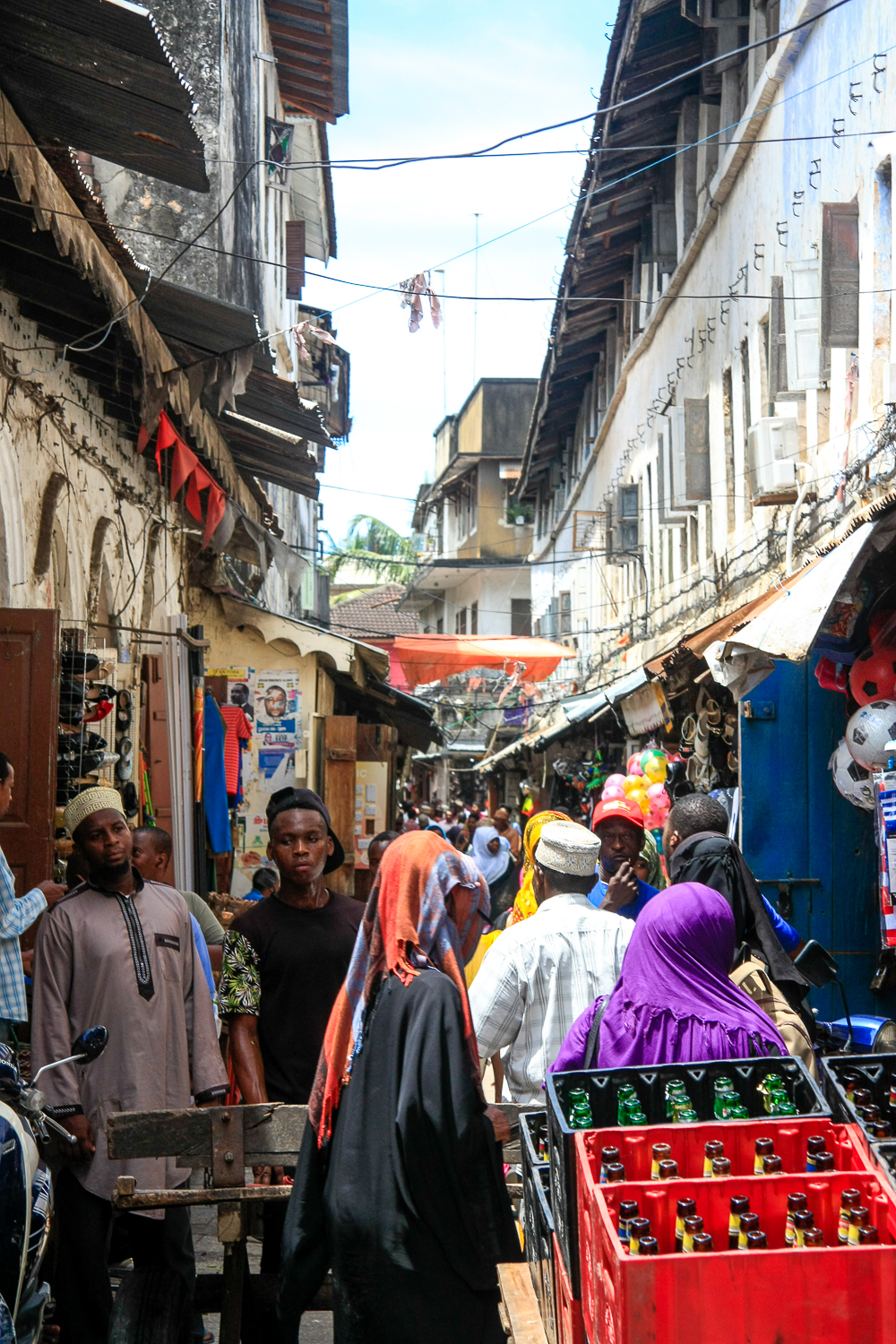 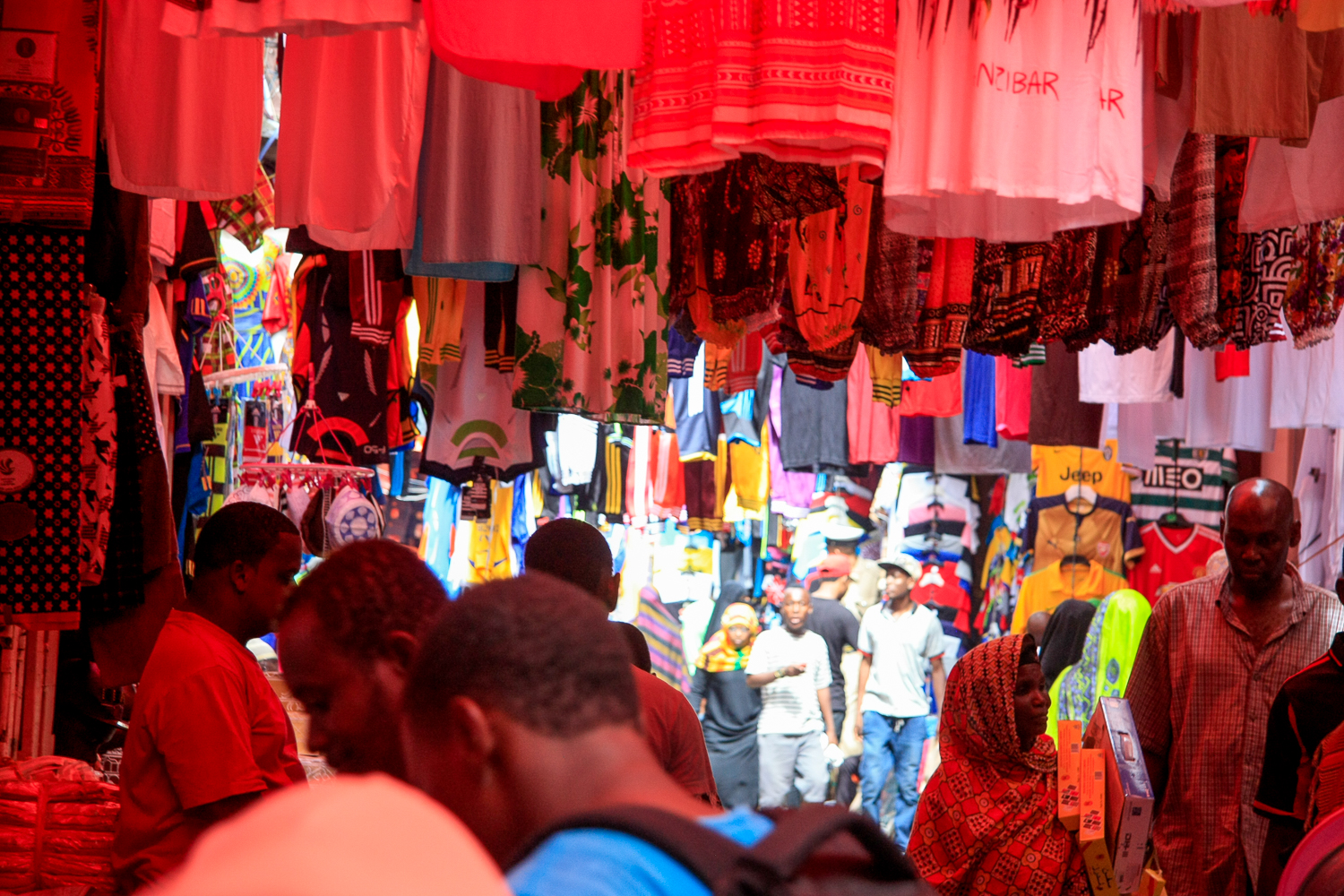 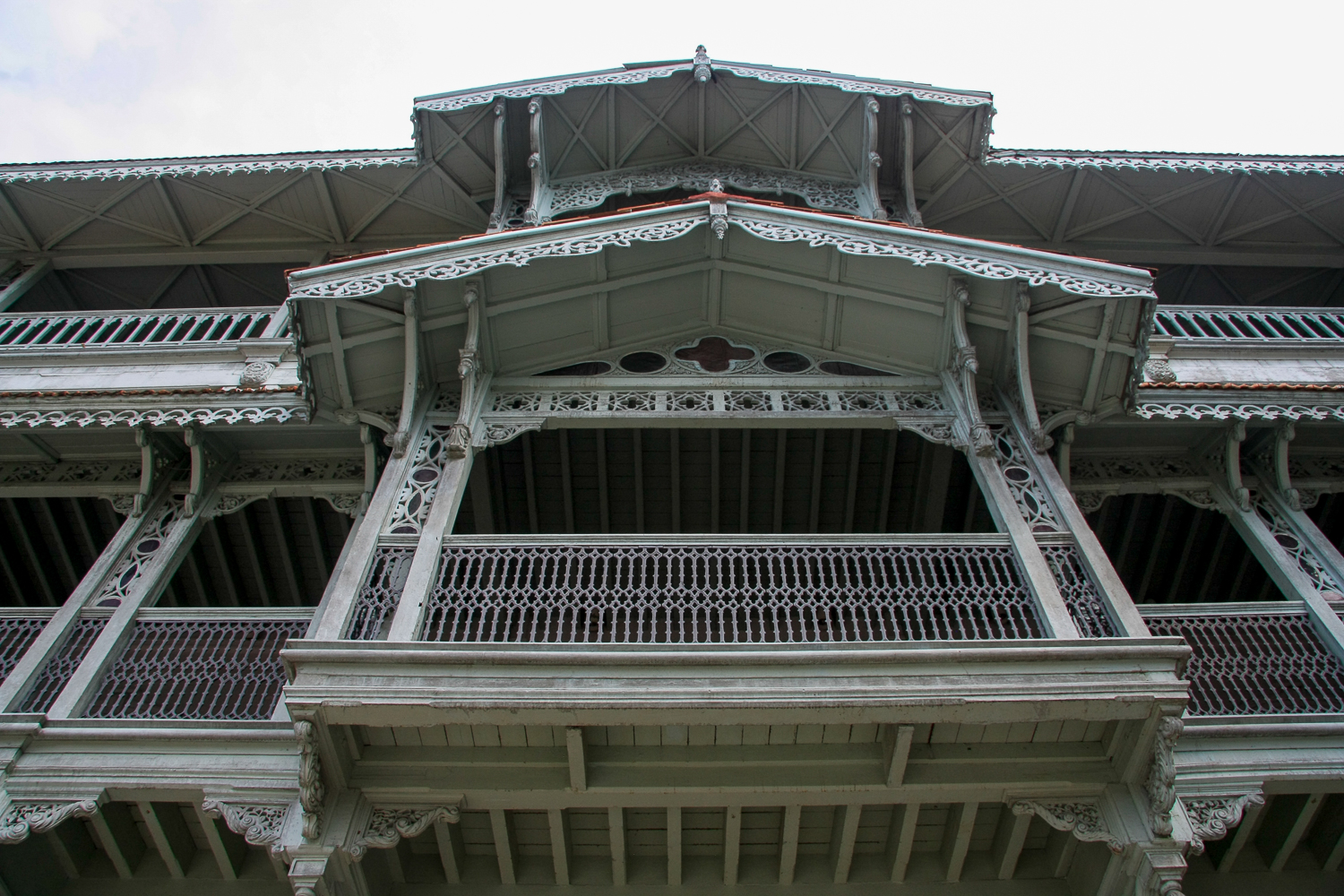 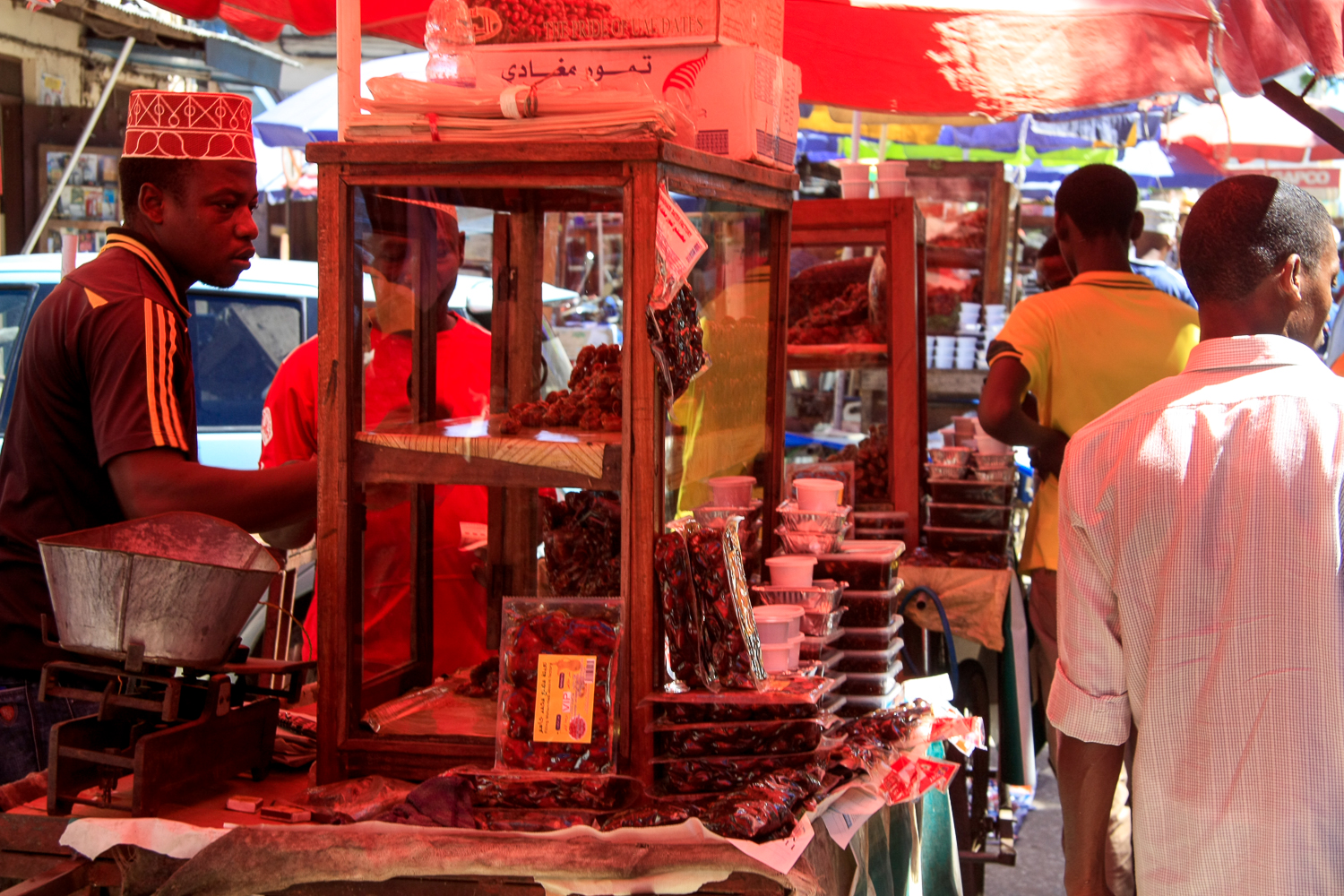 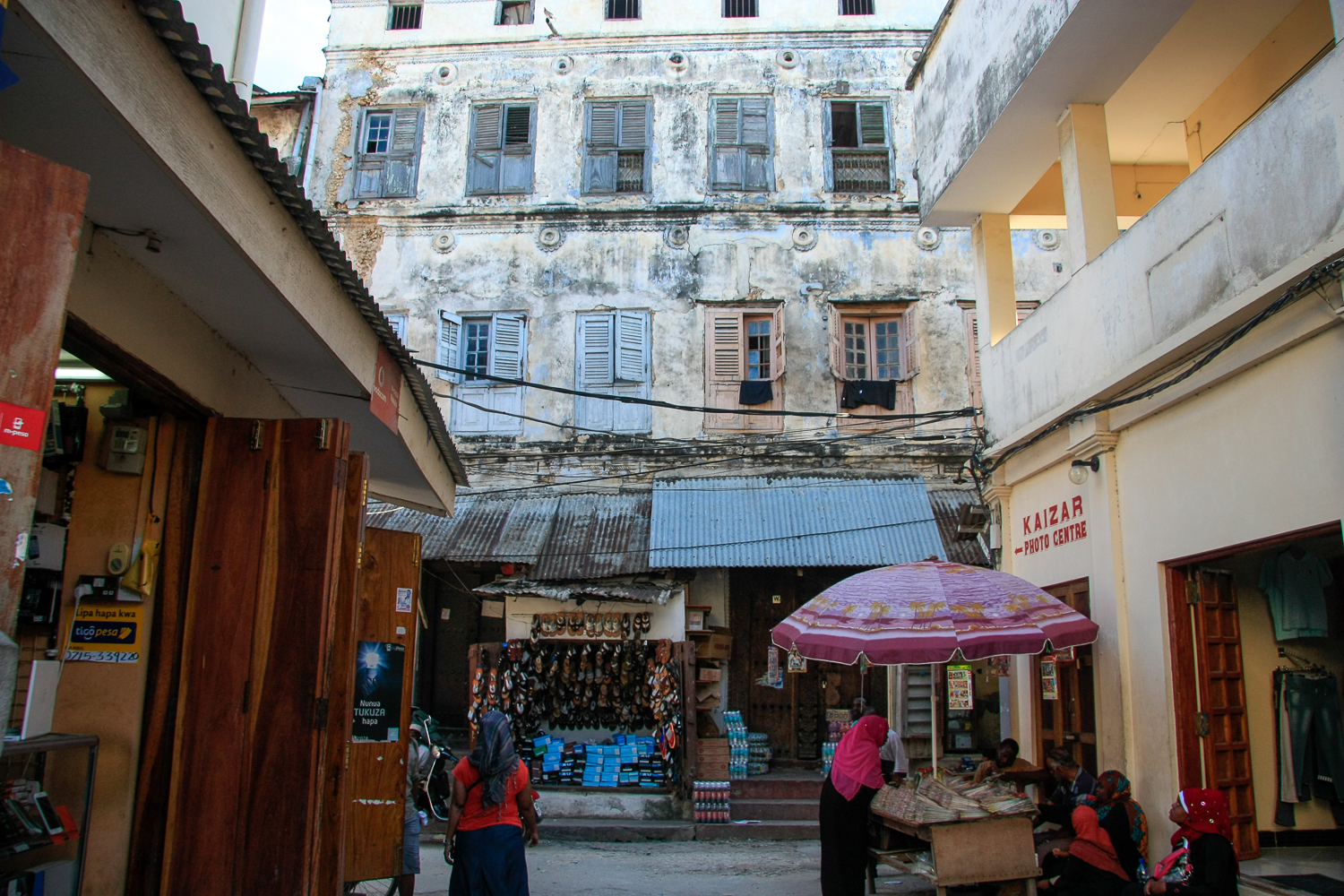 And I can’t stress that enough. In the touristy areas, I did really get bothered by touts. But outside of that, even in the market (which is usually a place I find hard to photograph in any African city), people were friendly. In the many hours I spent lost in the maze, people I passed would greet me with a “hello” or “mambo vipi”, then finish off with “karibu” (welcome) and a smile. You’d think they’d get sick of camera-toting tourists trundling along their homes and businesses, but no! One man saw me snap a photo of a pretty but new door, and proceeded to take me around to show some of the oldest doors on the island, before bidding goodbye. I even lost my wallet on a street in the dark one evening, and people tried to help me find it: one person had already, and held onto it until he found me, returning it with nothing missing! 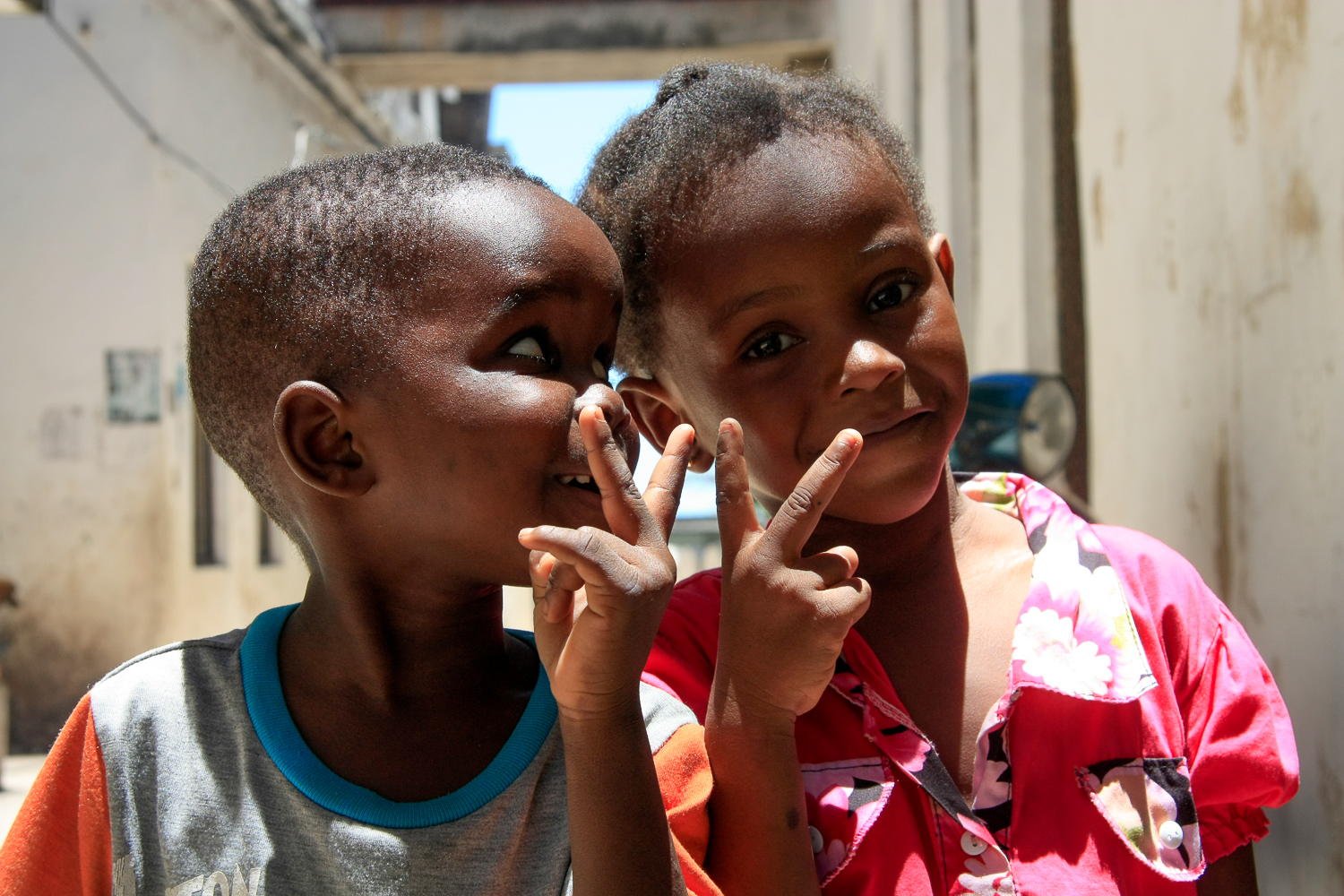 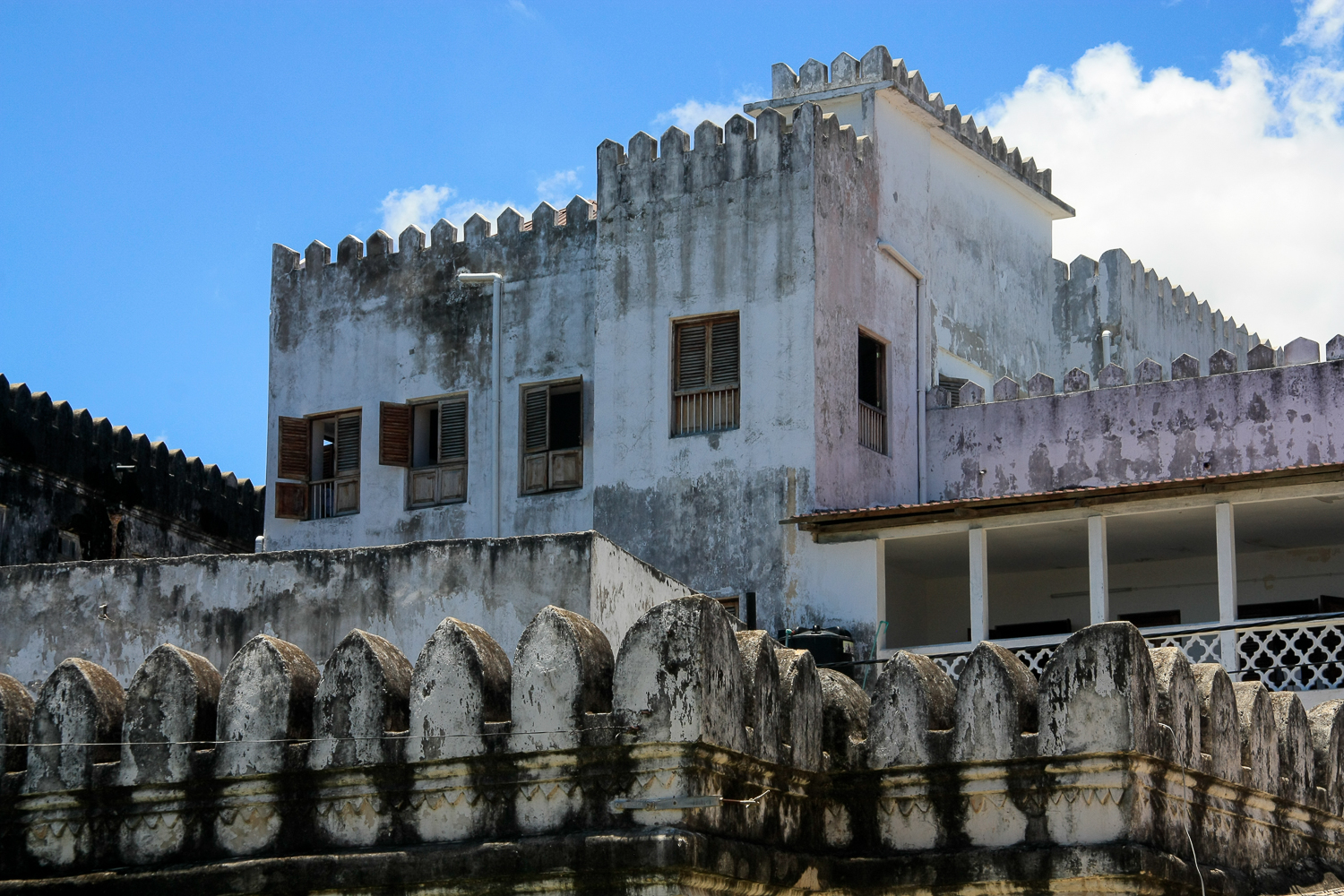 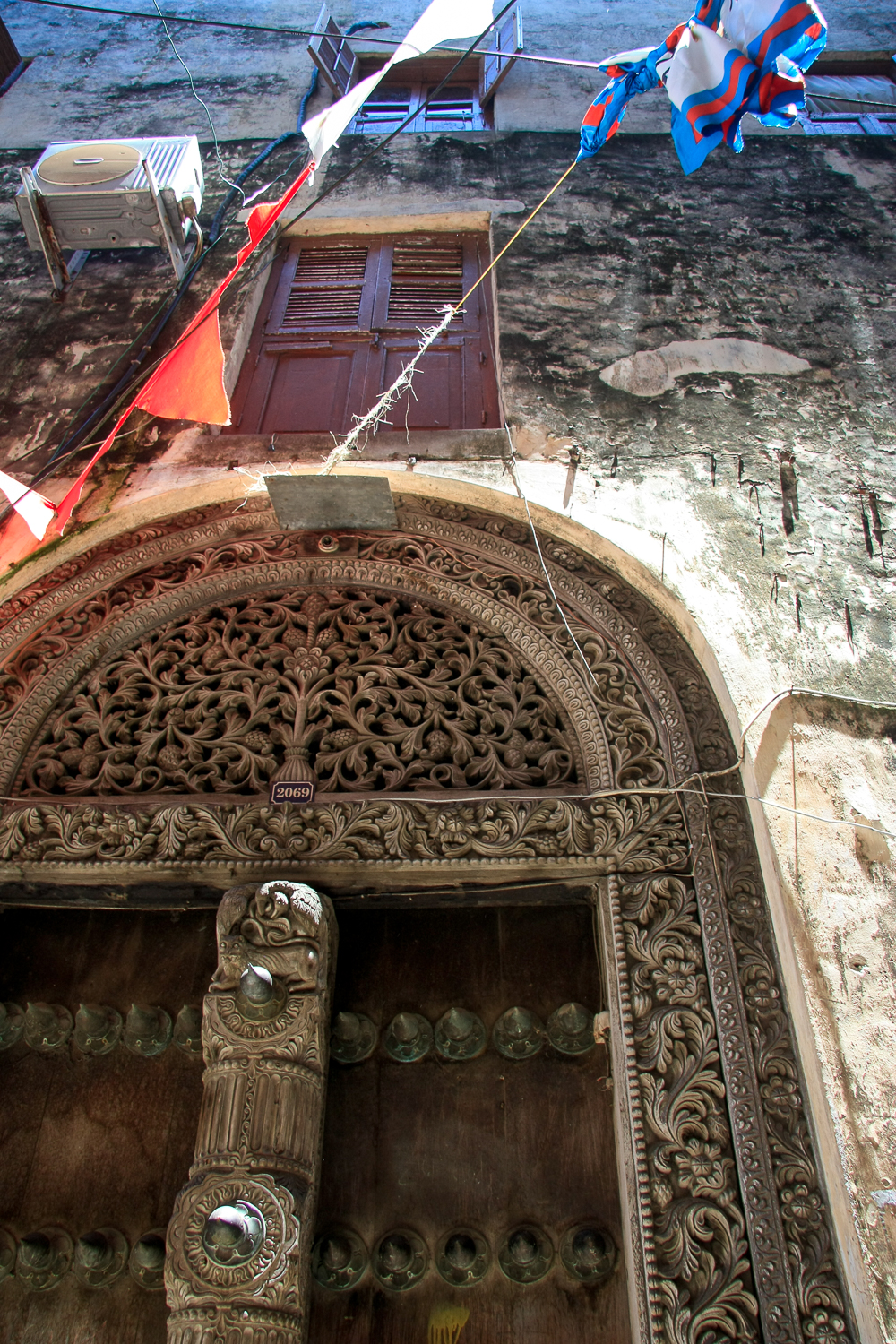 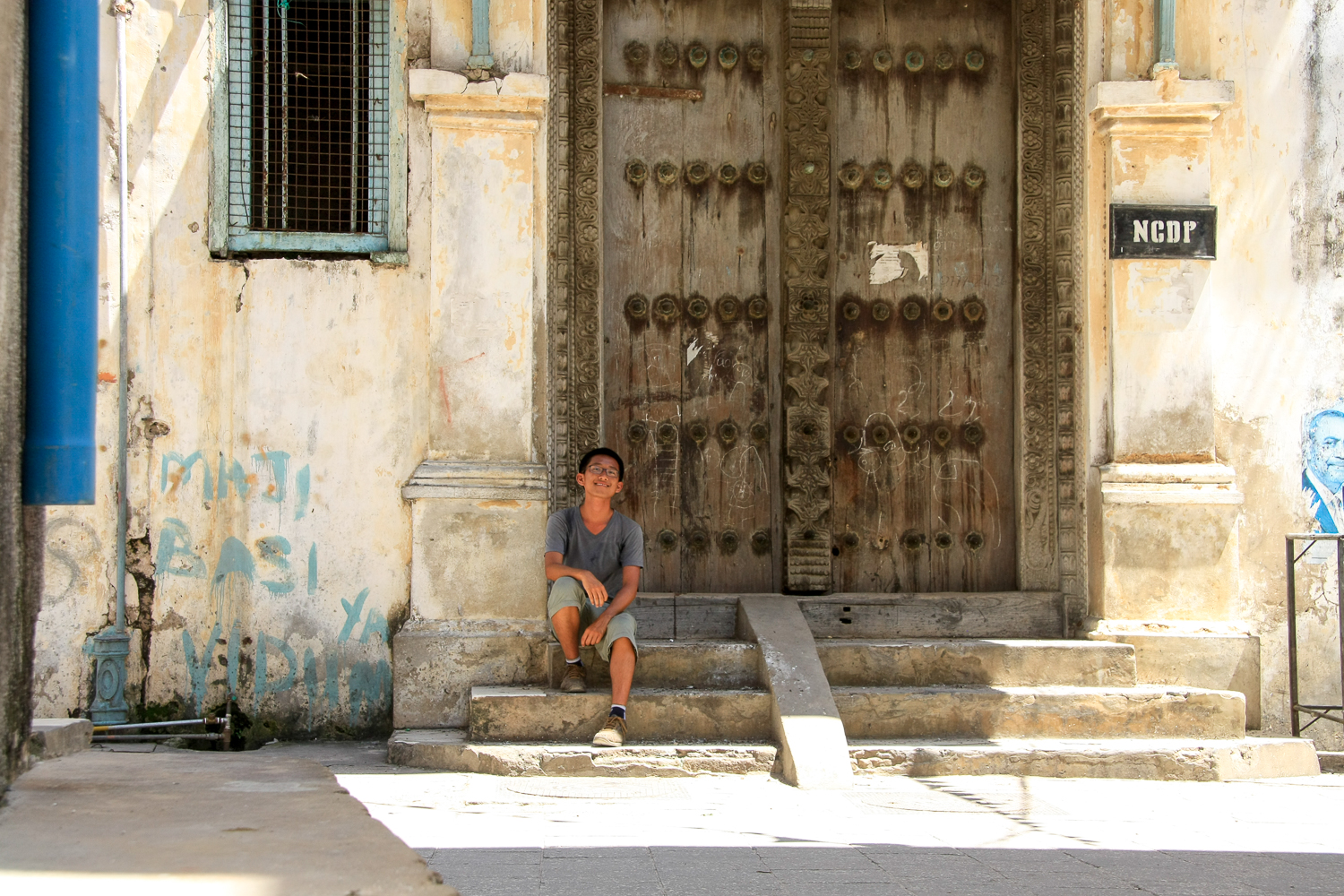 At the waterfront Forodhani Gardens in the late afternoon, local boys make running starts and jump off the ledge, doing tricks before landing in the water. By sunset, the ground is sopping wet from them climbing back up from the water and running back in again, but such a great scene — they’re all having fun, absolutely unbothered by the presence of snap-happy tourists (of which I am clearly one), and they’re pretty good at this whole diving thing to boot. (Must be a good workout too; I swear every last one of them has six-pack abs, even the children; probably from all the somersaulting!) Steps away, a nightly street food market sets up and sells some delicious and cheap food, all with a view of the water. Even inside the maze of alleys well away from the water, families set up their stalls and sell well-spiced skewers of meat. 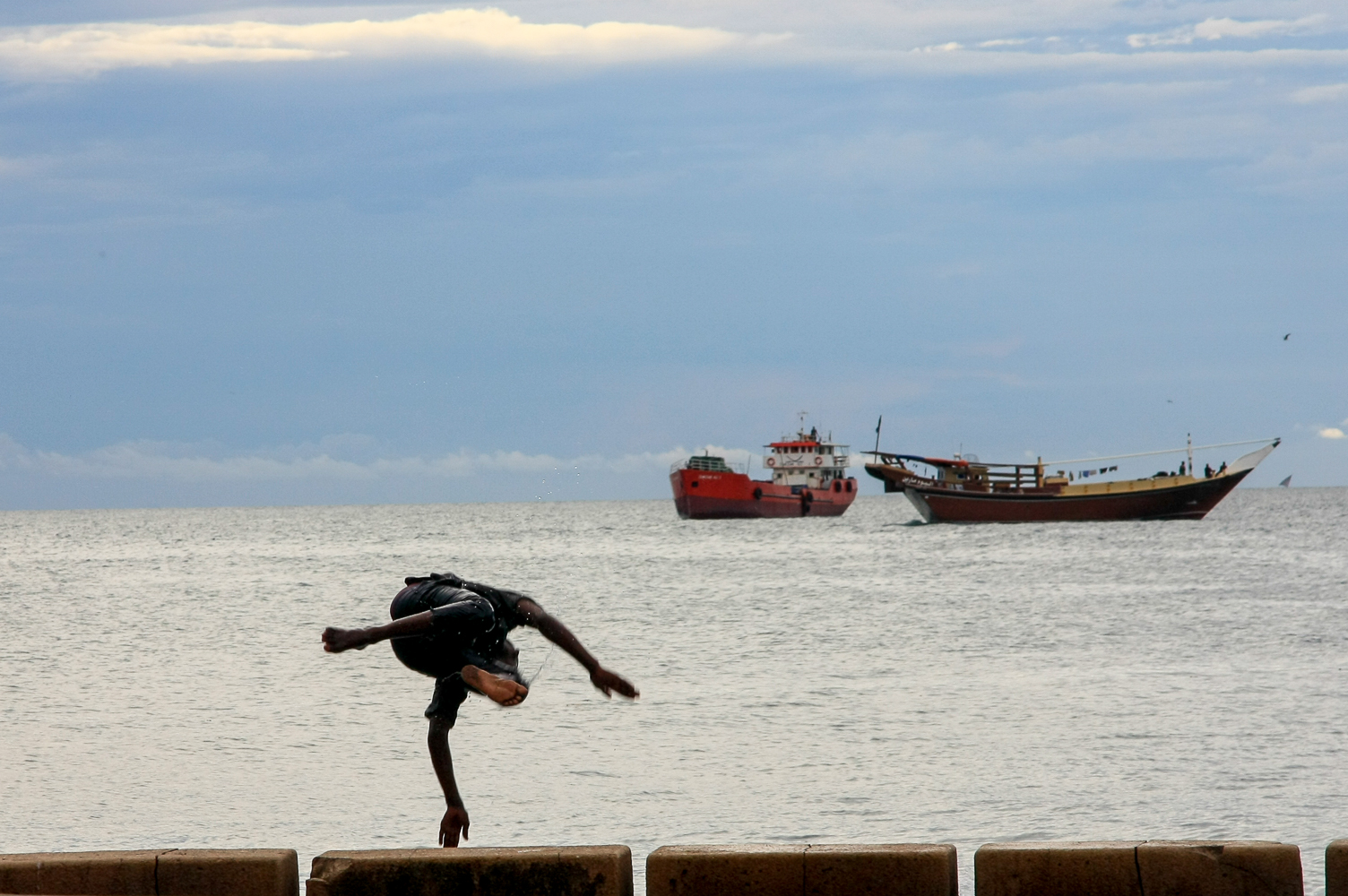 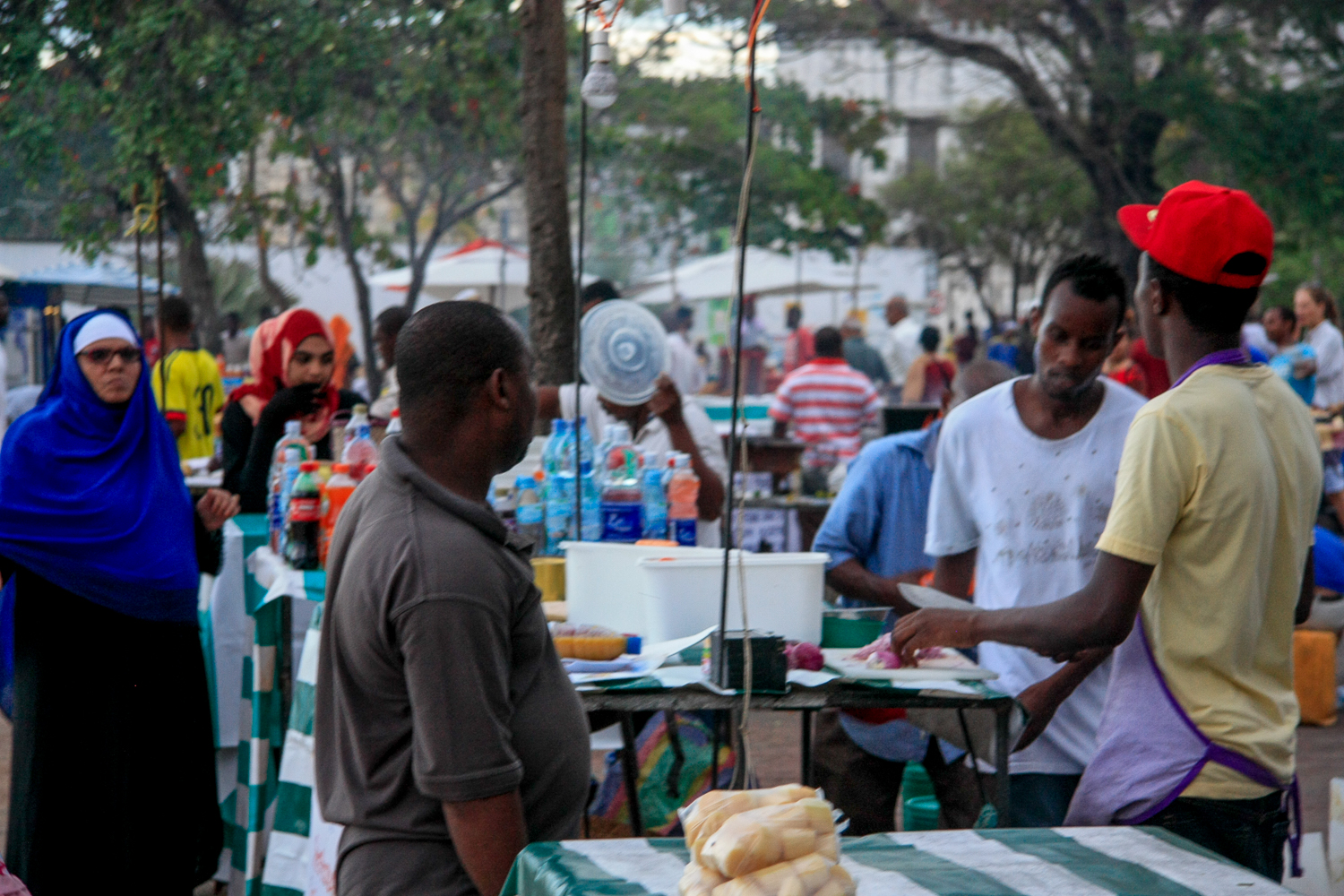 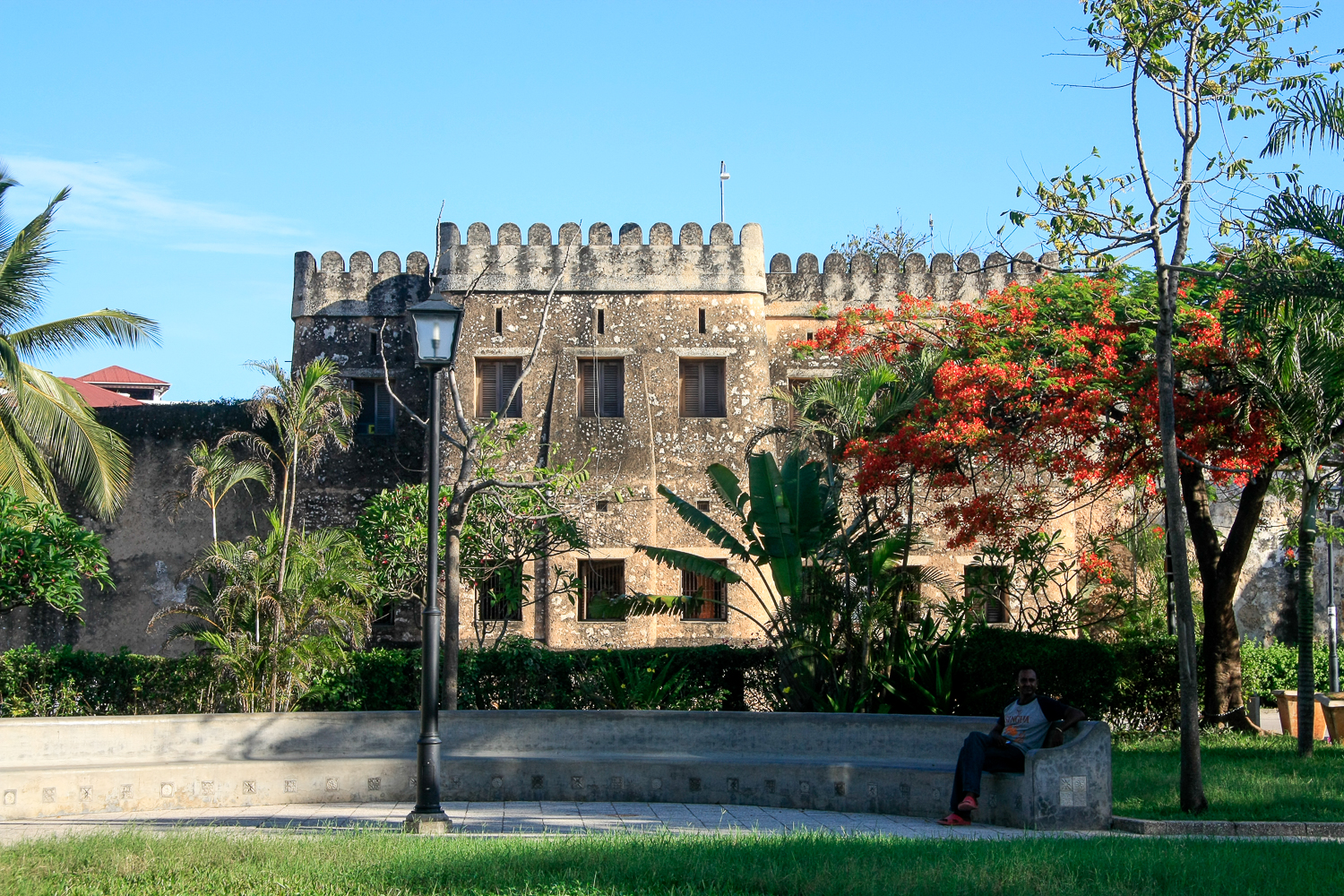 I spent a few days two hours’ north of Stone Town in Nungwi, a beachside village also home to a bunch of fancy resorts. It’s an interestingly odd mix of modern and traditional, rich and poor, but people don’t seem to be particularly bothered by it. Steps away from the primarily Italian crowd of scantily-clad, sunburnt and wrinkled people, locals (both men and women fully clothed) fix their fishing nets and dhows (sailboats), harvesting seaweed and shells during low tide, paying no mind to the people around them attempting to tan (which is crazy, given how incredibly hot the sun is) or swim. On the main road, away from the resorts, I enjoyed mingling in the local restaurants, downing pilau and fresh, super-cold pineapple juice (only 25 cents a glass!) while sweltering in the heat. And on the beach, even the “expensive” restaurants setting up their tables on the sand in the evening really weren’t so unaffordable, with a great starlit and candlelit atmosphere and plenty of seafood. 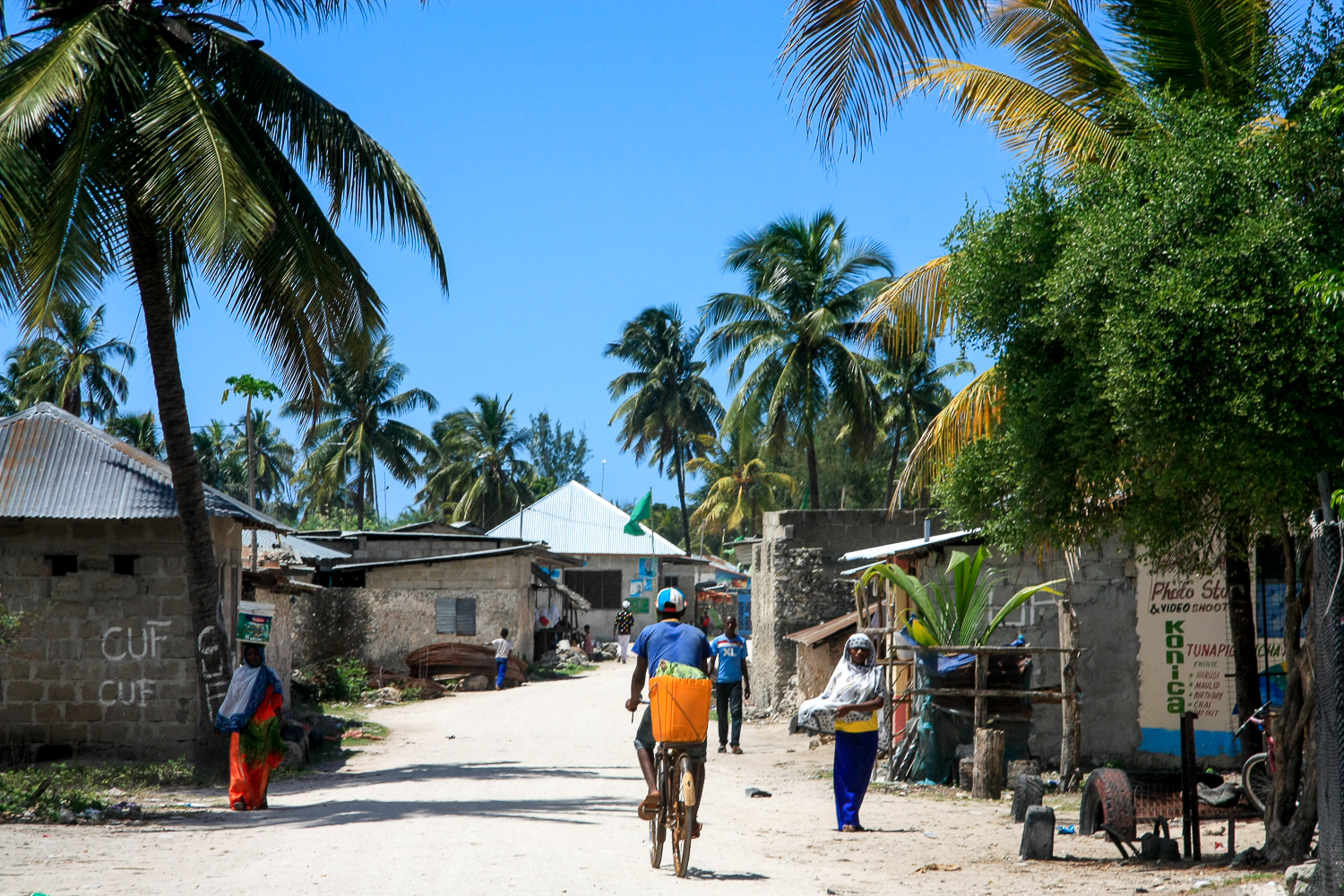 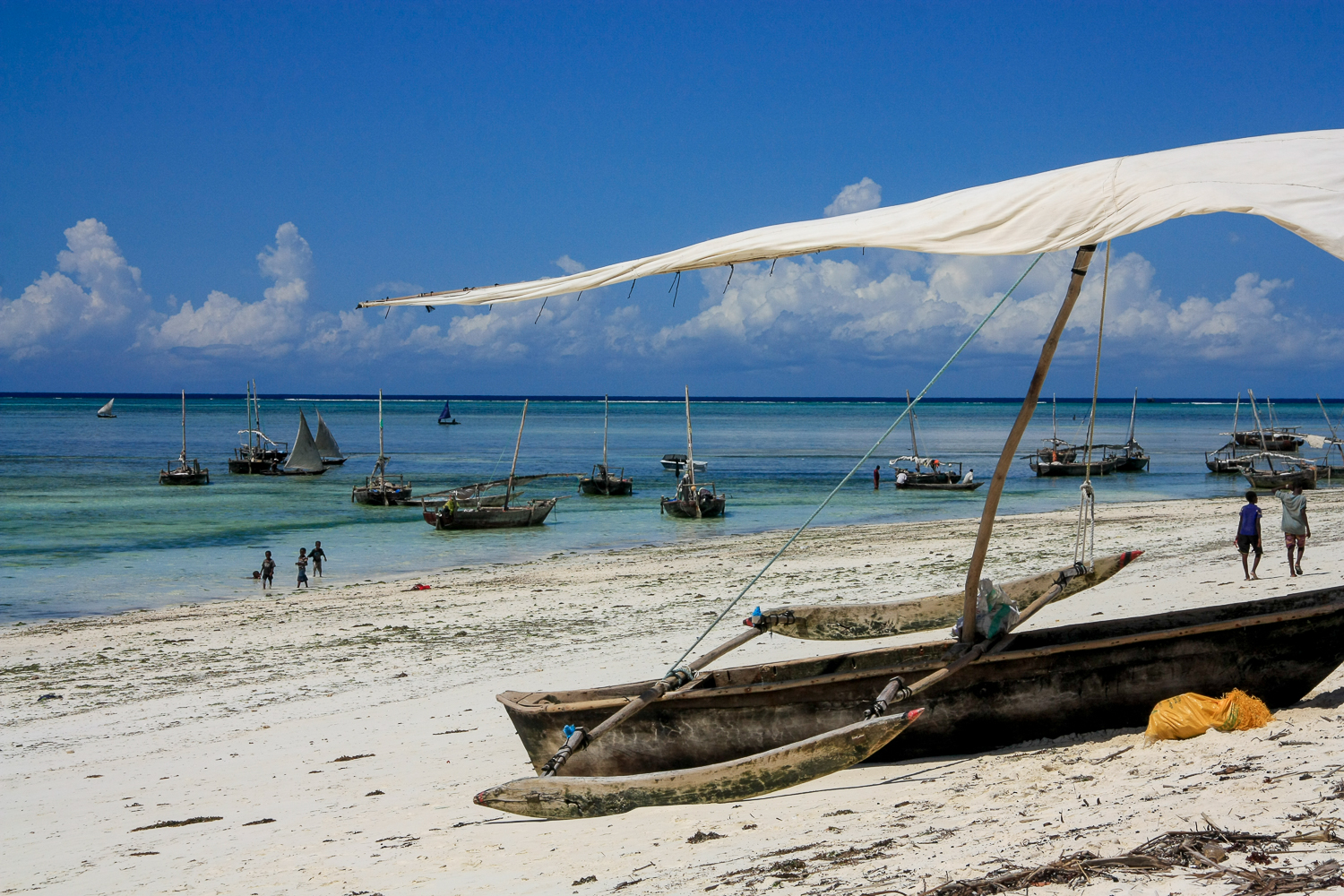 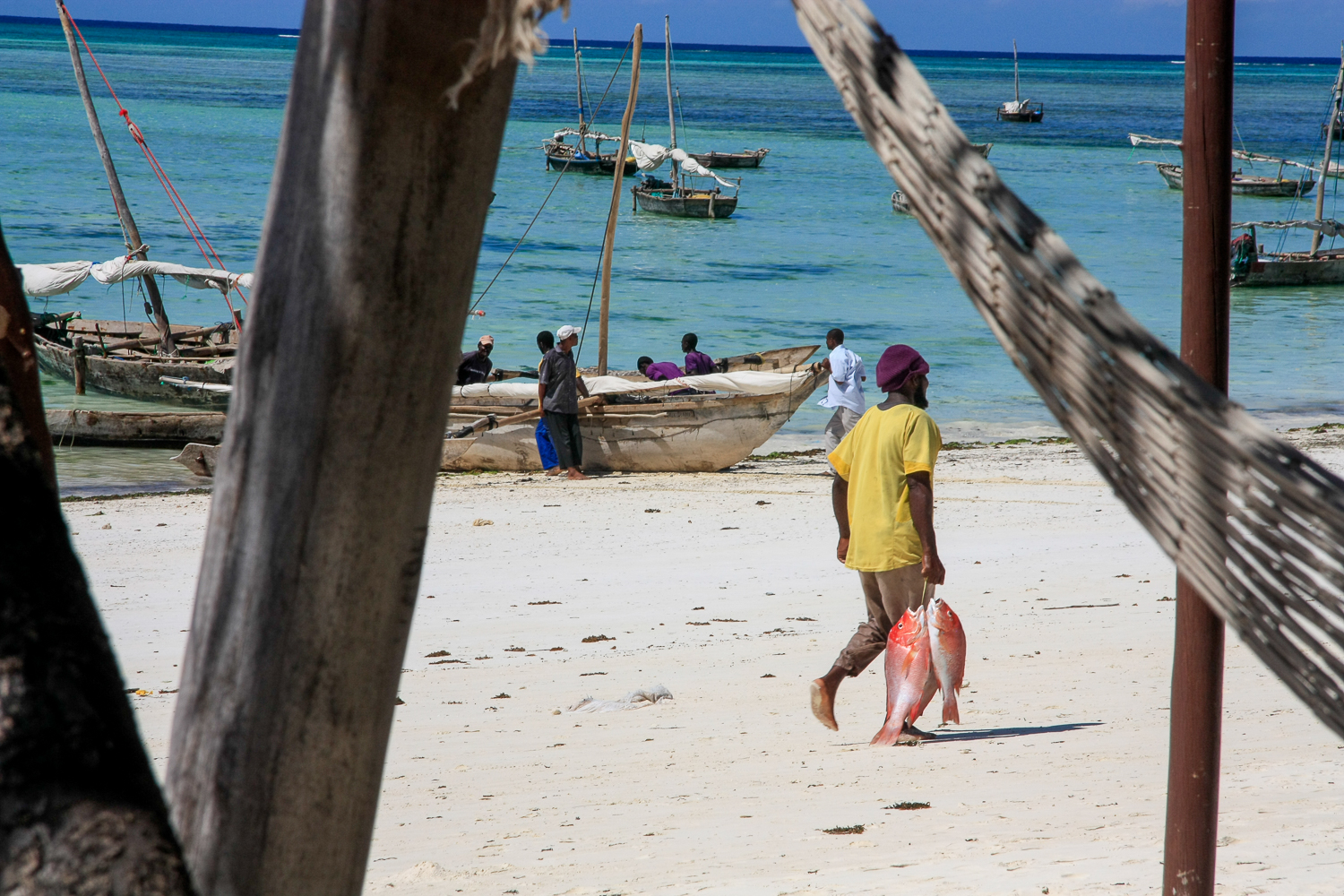 Oh, right, the beach. Turquoise and white, of course. A little tough to swim in during low tide, due to walking distance increasing, the temperature of the water, and the presence of some sea urchins, but come on, look at that. I’m not complaining! 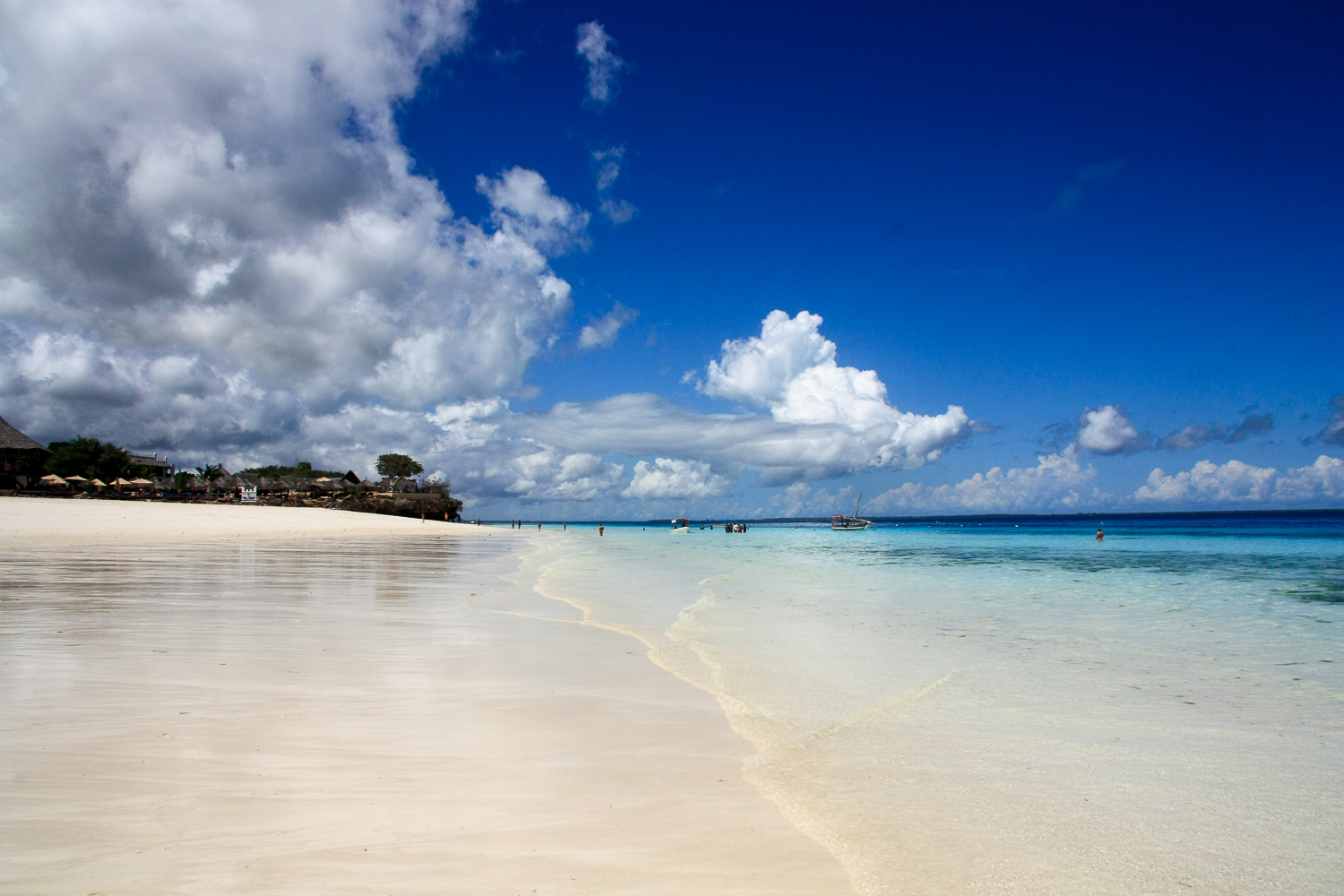 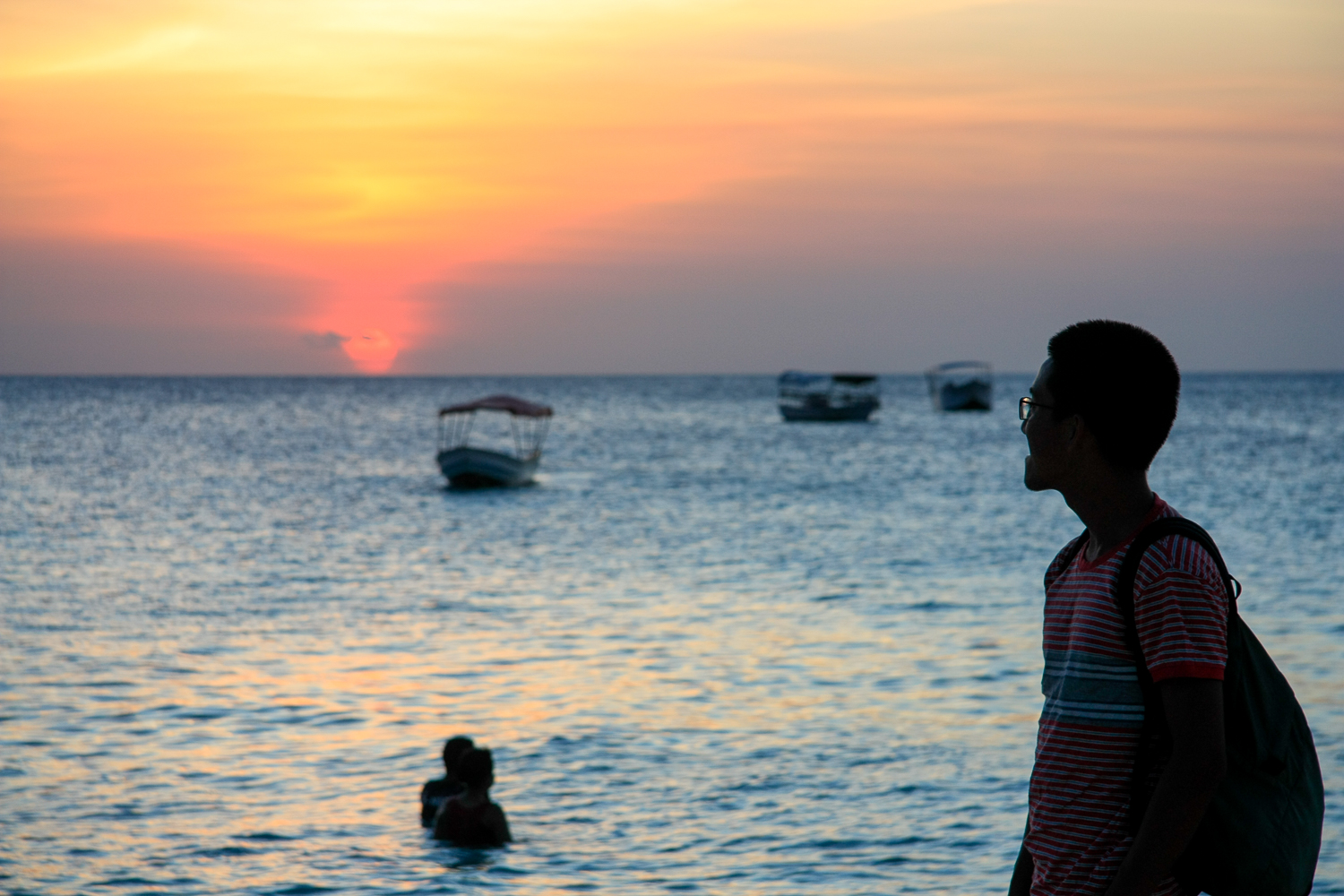 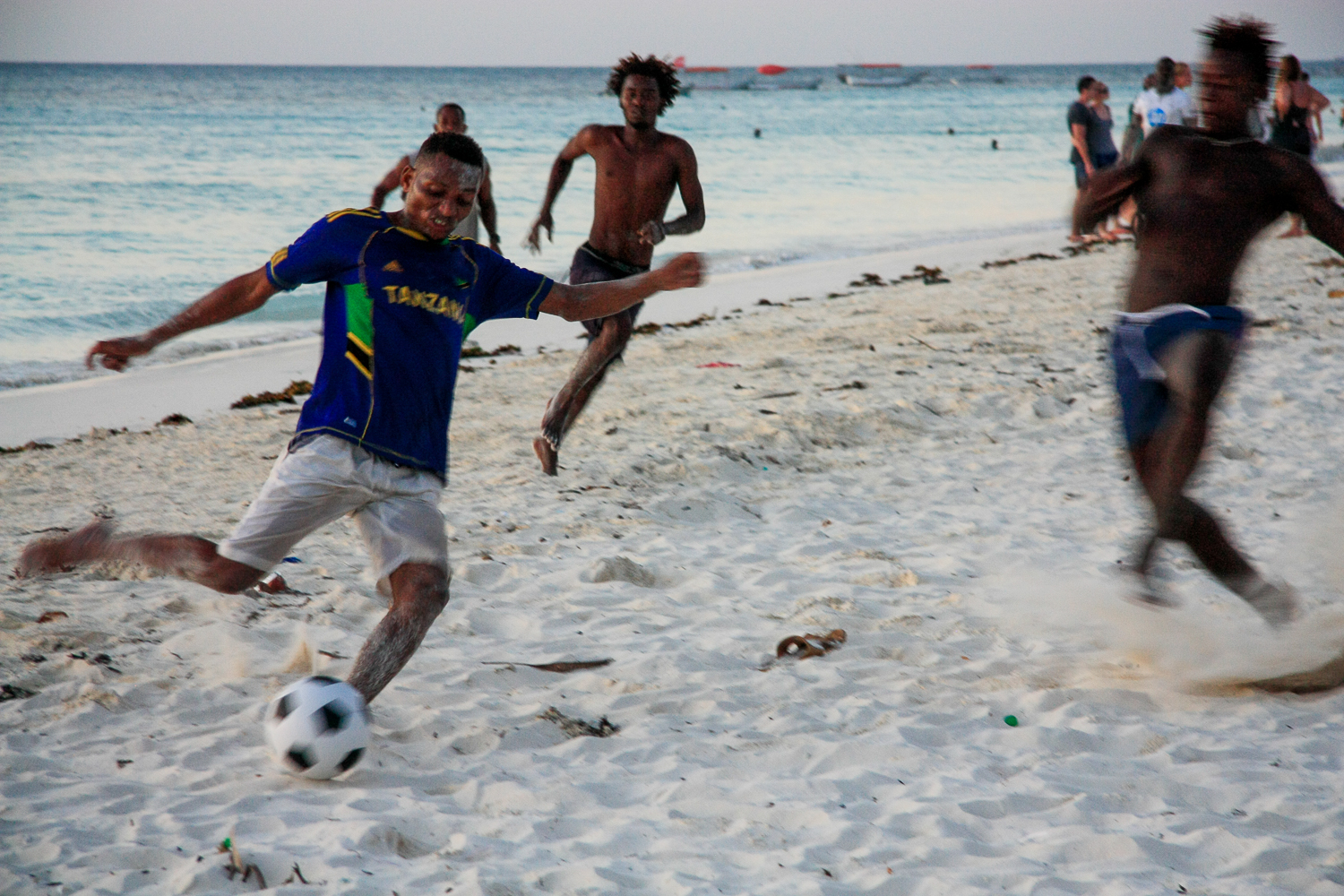 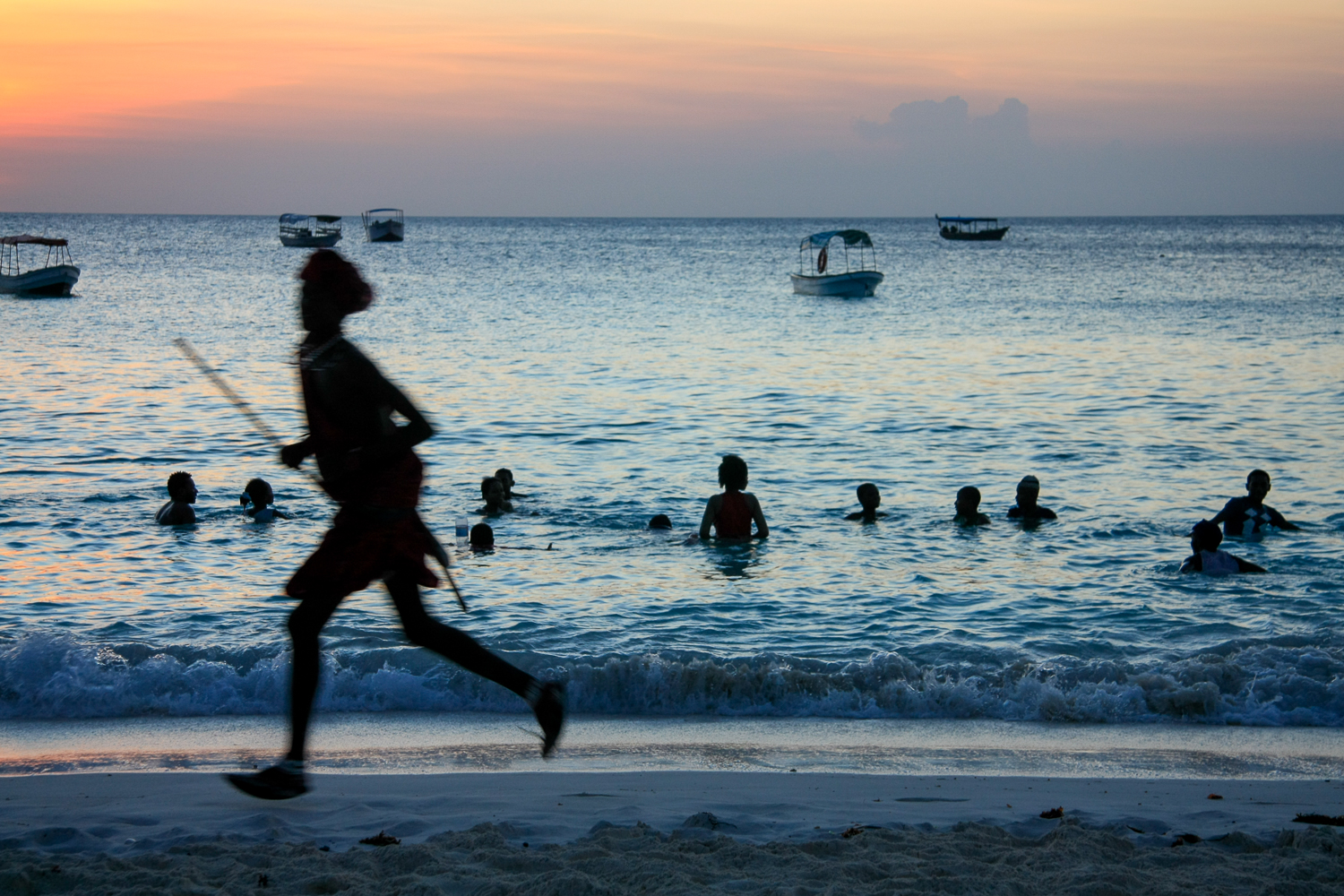 Perhaps I was a little quick to judge Tanzanians as unchatty, because that certainly wasn’t the case on the island. I met Wilson, a dala-dala driver from Arusha who was out in Nungwi handing out applications trying to find a job, perhaps driving a vehicle for a resort. I still can’t quite wrap my head around how I figured that out, since he speaks only Swahili and I know like 10 words, but we ended up hanging out for the days that I was there, walking around, swimming, eating, and…attempting to talk and mime concepts to each other. (At the very least, I’ve now learned some Swahili beyond the constant and incredibly irritating “rafiki” and “hakuna matata” calls that all the touts use, assuming everyone’s watched The Lion King.) According to Wilson, pay is low in Arusha and lower still as a dala-dala driver, but jobs are both higher-paying and more plentiful in Zanzibar. Plus, Zanzibar is on the water! He’s left his whole family, wife and two children in Arusha trying to find a break, and hoping to move them all over rather than have to move back himself. I wished him good luck and wondered if he understood me. 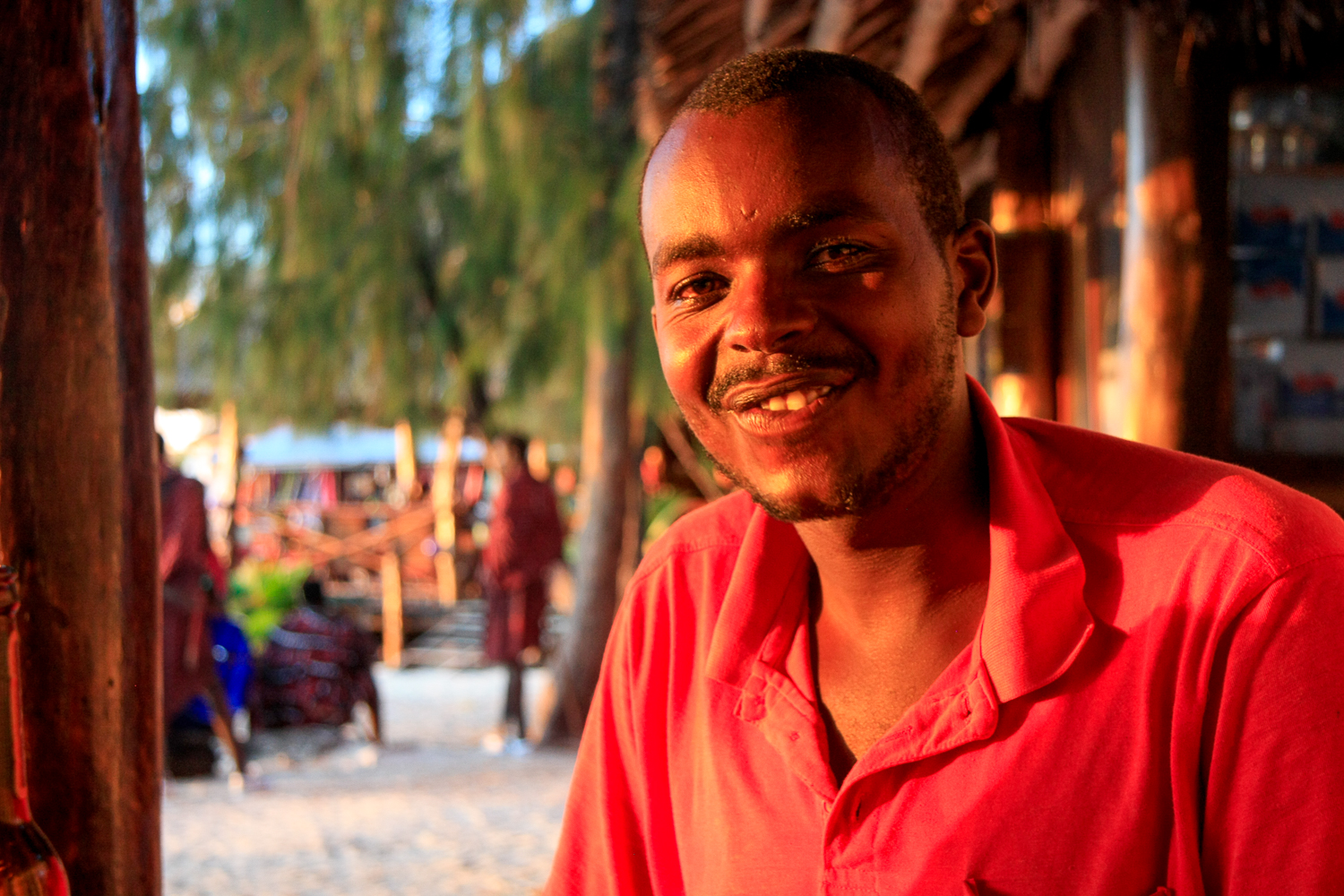 Back in Stone Town, on my last evening, watching the sunset over the water with Martin from Denmark (who I kept running into on the island), we met Khamis, a high-schooler who liked to hang out in the evenings in tourist areas to practice his English. Awww. He took out a book and proudly displayed pages of written Celine Dion, Justin Bieber, and explicit gangster rap lyrics — more English practice. While poring over more pages of words and grammatical concepts in English, I innocuously asked about all the flags flying around the streets.

His English suddenly got stilted, but his face went dark. Politics. As a special region in Tanzania, Zanzibar holds its own presidential and house elections. While John Magufuli was elected last fall as the president of Tanzania, and has held onto his popularity in the mainland by going on an anti-corruption drive, his party (CCM, Revolution Party) is a bit more polarising in Zanzibar: some Zanzibaris, like Khamis and his family, feel that the CCM in Zanzibar is only interested in taking away its resources to be distributed to the rest of Tanzania, getting little back in return.

Zanzibar’s opposition party (CUF, Civic United Front) claimed victory last fall, but the election was annulled under mysterious allegations of fraud. They’re running the election again this week, but the CUF is claiming that it will be rigged against them, and is refusing to participate so as not to legitimise it. People are disappearing when they speak up, and so they don’t. But anyhow, the CUF’s got an interesting idea: while there’s some graffiti in Zanzibar that advocates for separation, the CUF (well, the majority of it) isn’t interested, and they’re happy to stay in the union. They just want the country to have a third government: the existing ones for Zanzibar and the union of Tanzania, plus one for the mainland. How they’d force the mainland to create a new government, I have no clue, but it’s a novel approach for an autonomous region of a country seeking more control of its affairs, one that shuns absolute independence. 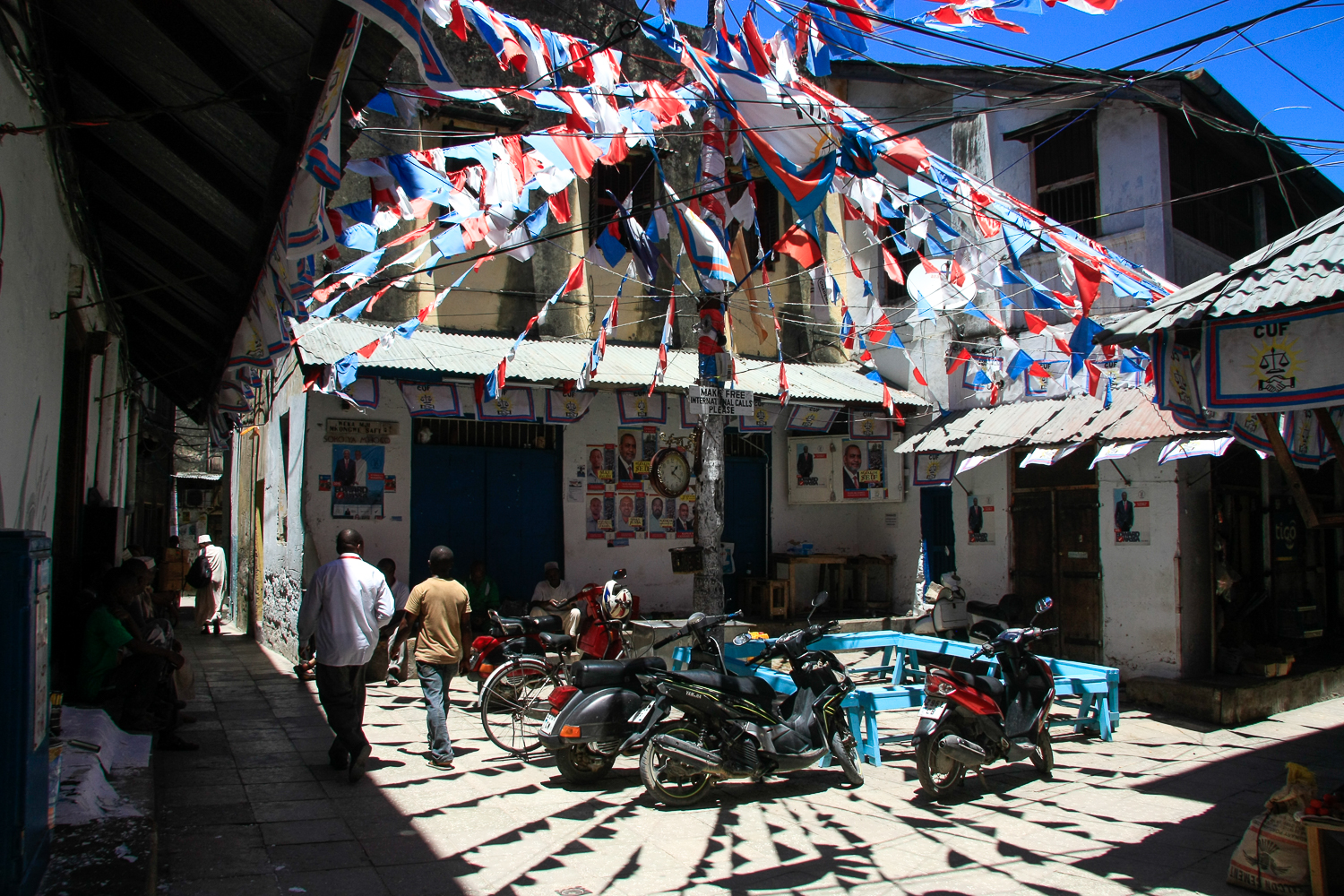 They do have their own separate identity here though, that’s for sure. “Karibu” is always “karibu Zanzibar”, not “karibu Tanzania”. Zanzibar’s got its own flag (which incorporates the Tanzanian one), and even border controls and its own passport stamp — a situation not lost on the Tanzanian border controls when I flashed them my Hong Kong passport (visa-free entry as opposed to visa-on-arrival for Canadian and Chinese passport holders) and was asked to explain the difference between HK and China. (That’s a whole other Pandora’s box I’m not opening here, but you get the point.) But despite the odd coupling, Zanzibar and the mainland do need each other. Wilson and many of his friends from Arusha are either looking for or have already found work on the island, and you can also see plenty of enterprising Maasai (real and fake) on the island, despite the fact that they never lived here indigenously. Khamis is looking to study at a more prestigious university on the mainland, hoping to become a doctor, and many Zanzibaris who need healthcare in general also head to the mainland for better care.

Anyway, back to Khamis. We said goodbye after he sang “My Heart Will Go On”. I briefly considered holding out my arms on the ferry returning to the mainland the next day, but uh… no.