After a month in the highlands and mountains of Greater Tibet, arriving in hot, hot Dunhuang was jarring both visually and physically. The green, rolling hills are replaced by the largely flat and featureless Gobi Desert, dominating my train ride throughout Gansu province 甘肅, and the comfortably cool weather replaced by an oppressive (but thankfully dry) heat reaching over 40°C (104°F) on my arrival. No more Tibetan bilingual signs, although that already stopped in Xining, an ethnically-mixed city. Practically every restaurant is halal 清真, and dopis and hijabs are far more visible than before, even amongst the massive numbers of Han tourists: this is a Hui heartland.

Despite the current demographic, this is a significant site of the Silk Road, an area which saw products hailing from faraway Central Asian lands pass through, holding a reputation as a gateway to Xi’an and the rest of China. Its former grandeur as Shazhou 沙洲, the city of sand (and now a non-descript district of the small city of Dunhuang), may have been lost through time and the central government’s previous attitude of cultural neglect and lack of preservation, but plenty of evidence still exists, primarily as an entry point of Buddhism into China.

To the south of Dunhuang lies Mingsha Shan 鸣沙山 (Singing Sands Mountain), with the tallest sand dunes I’ve ever seen towering over everything in sight. Its accessibility (merely by a public bus from town) again brings hordes of tourists, and so I’ve also never seen sand dunes so crowded, nor have I ever seen such a concentration of camels carrying tourists, in a cheeky (and short and expensive) approximation of the old Silk Road desert caravans of yore. 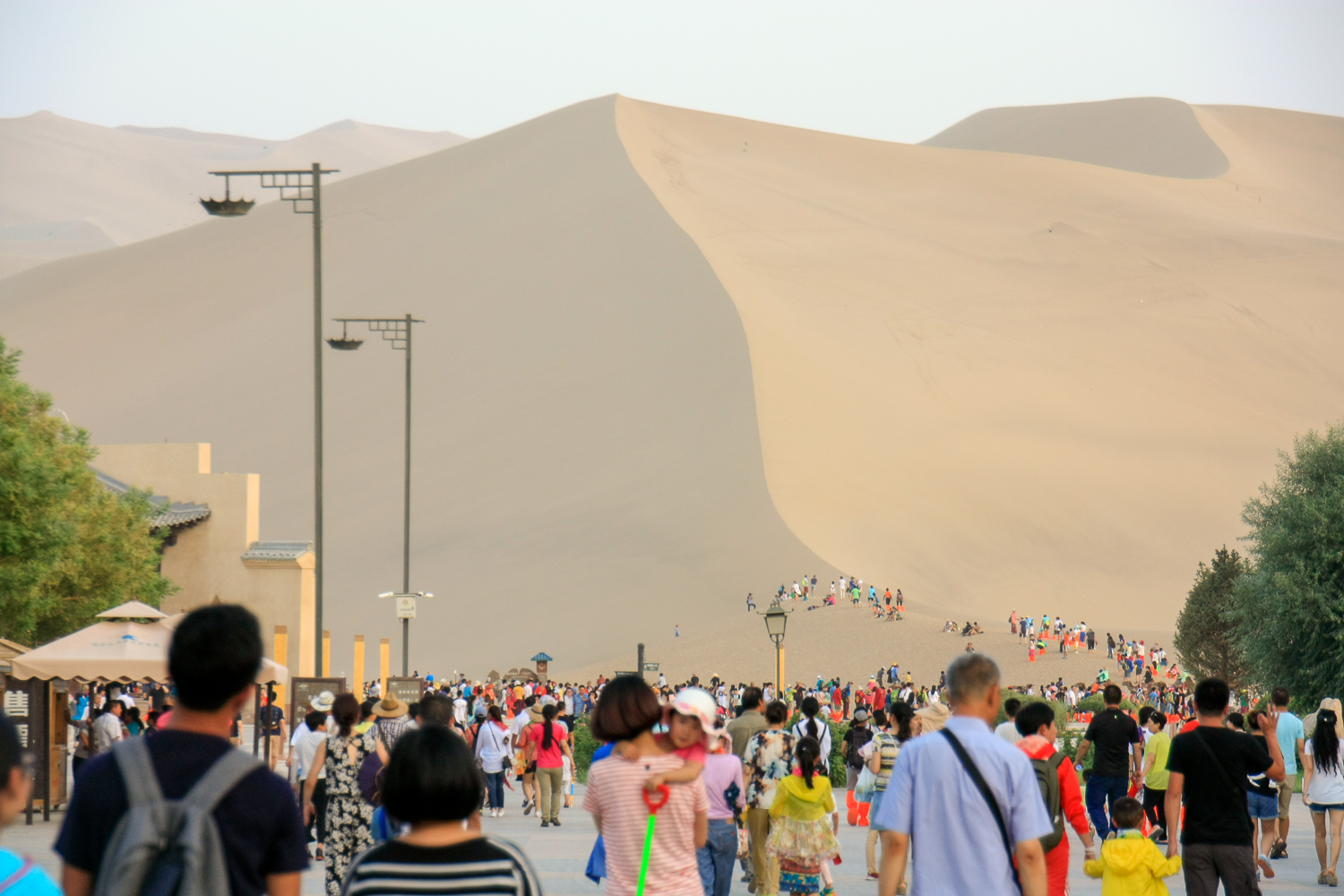 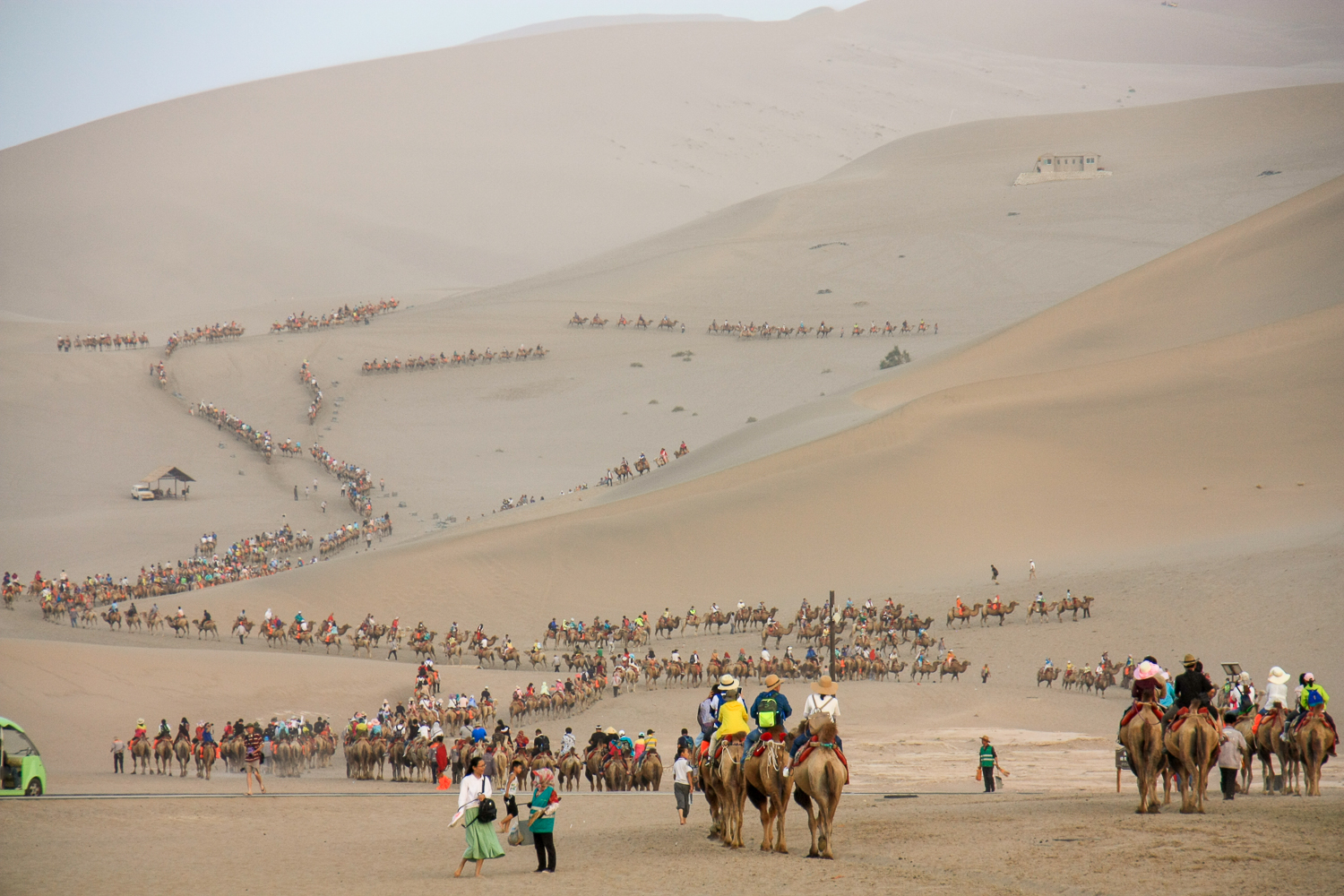 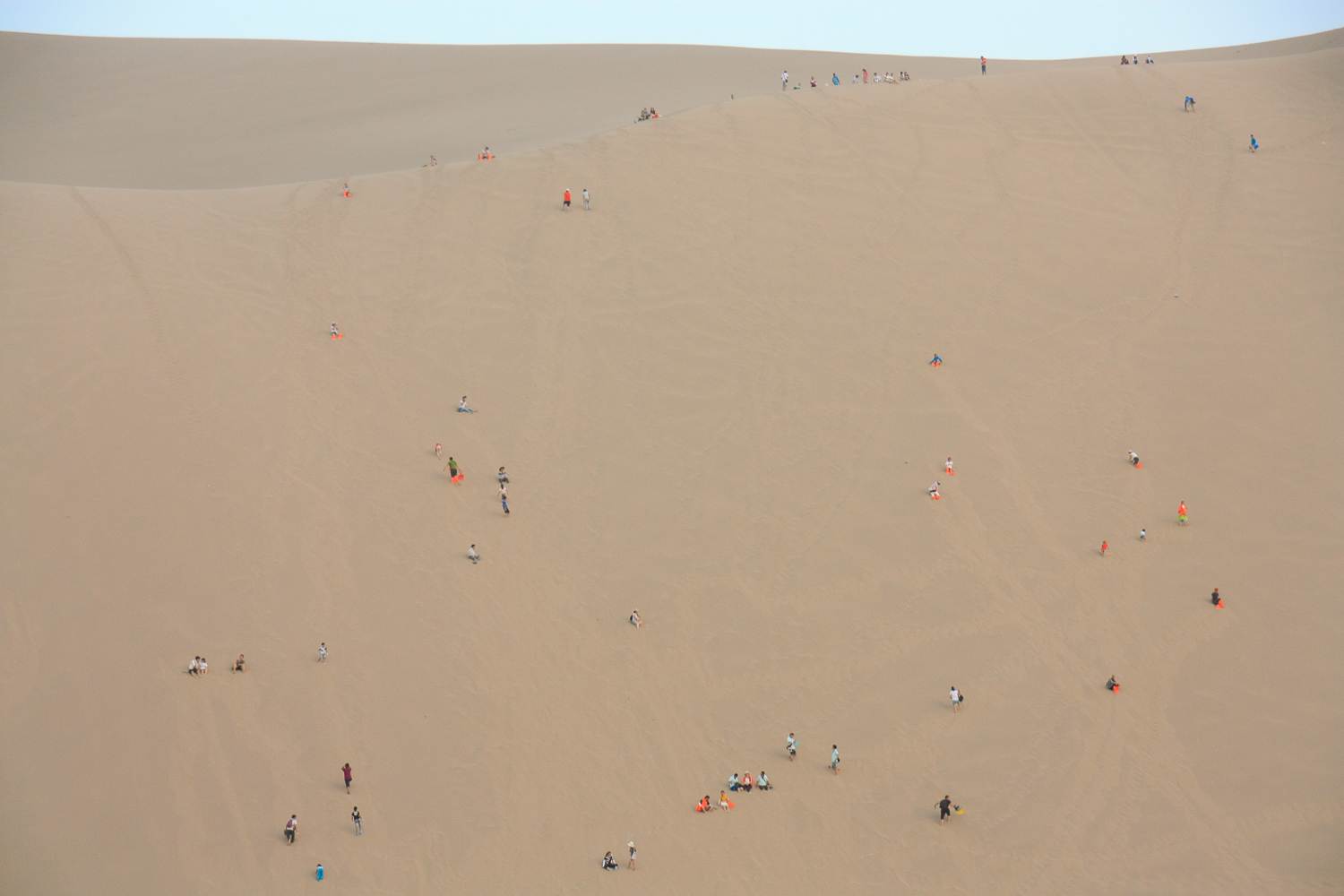 Even with the gentle 8pm sun, the climb up the dunes is exhausting, sweaty, and straight-up punishing. Mistakenly taking a path up with no aiding step-ladder, I (along with a bunch of other visitors, including seniors) heaved and gasped my way up, with the steep and slippery sand erasing progress every step of the way. Nonetheless, it was worth it for the view below of the Crescent Moon Oasis 月牙泉, even if it was also surrounded by bright orange shoe-protector-clad tourists. The sand in the air unfortunately made the sunset a bit of a bust, but come on, this is pretty special anyway! I rewarded myself further by downing plenty of apricot juice 杏皮水, a local specialty, after descending. 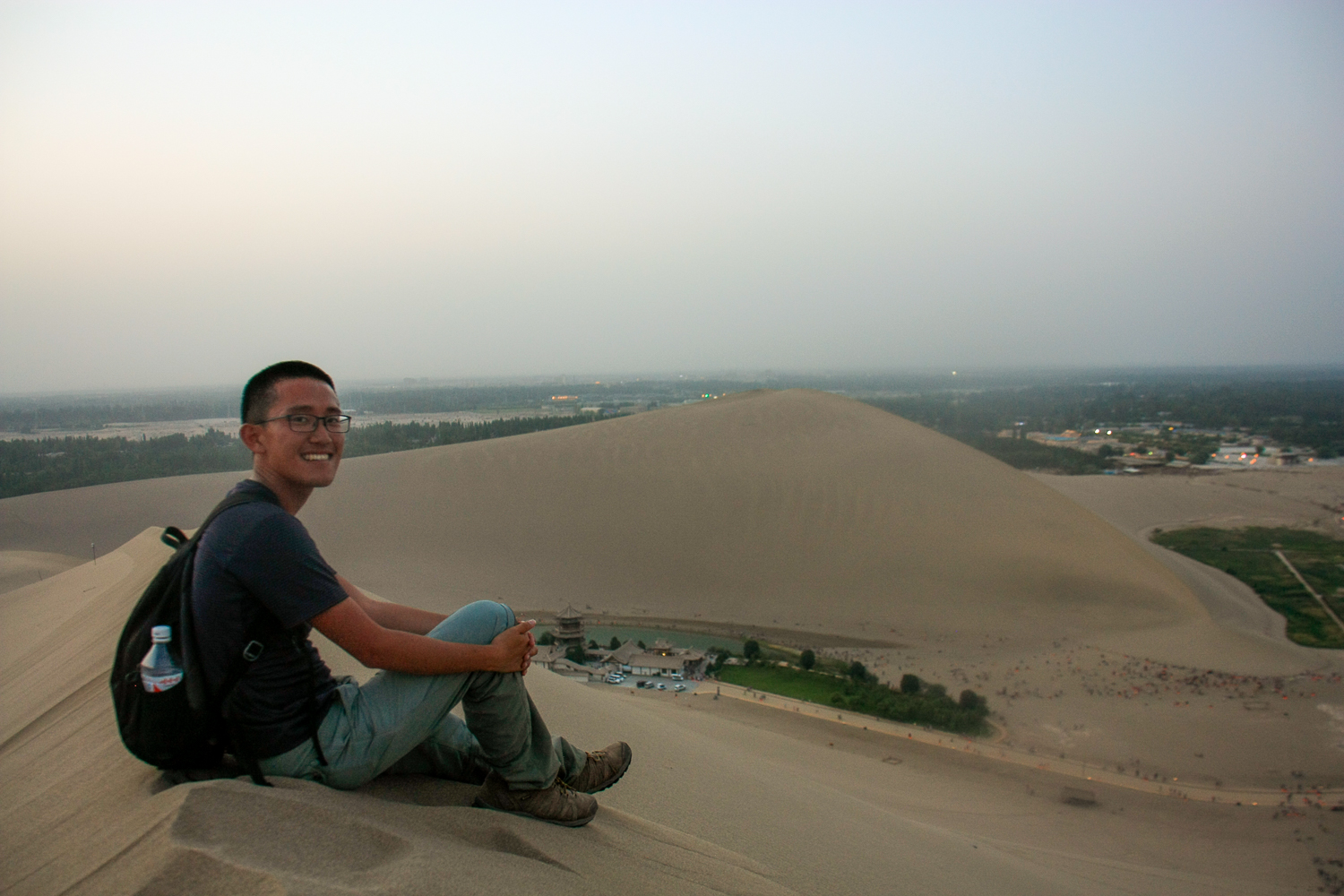 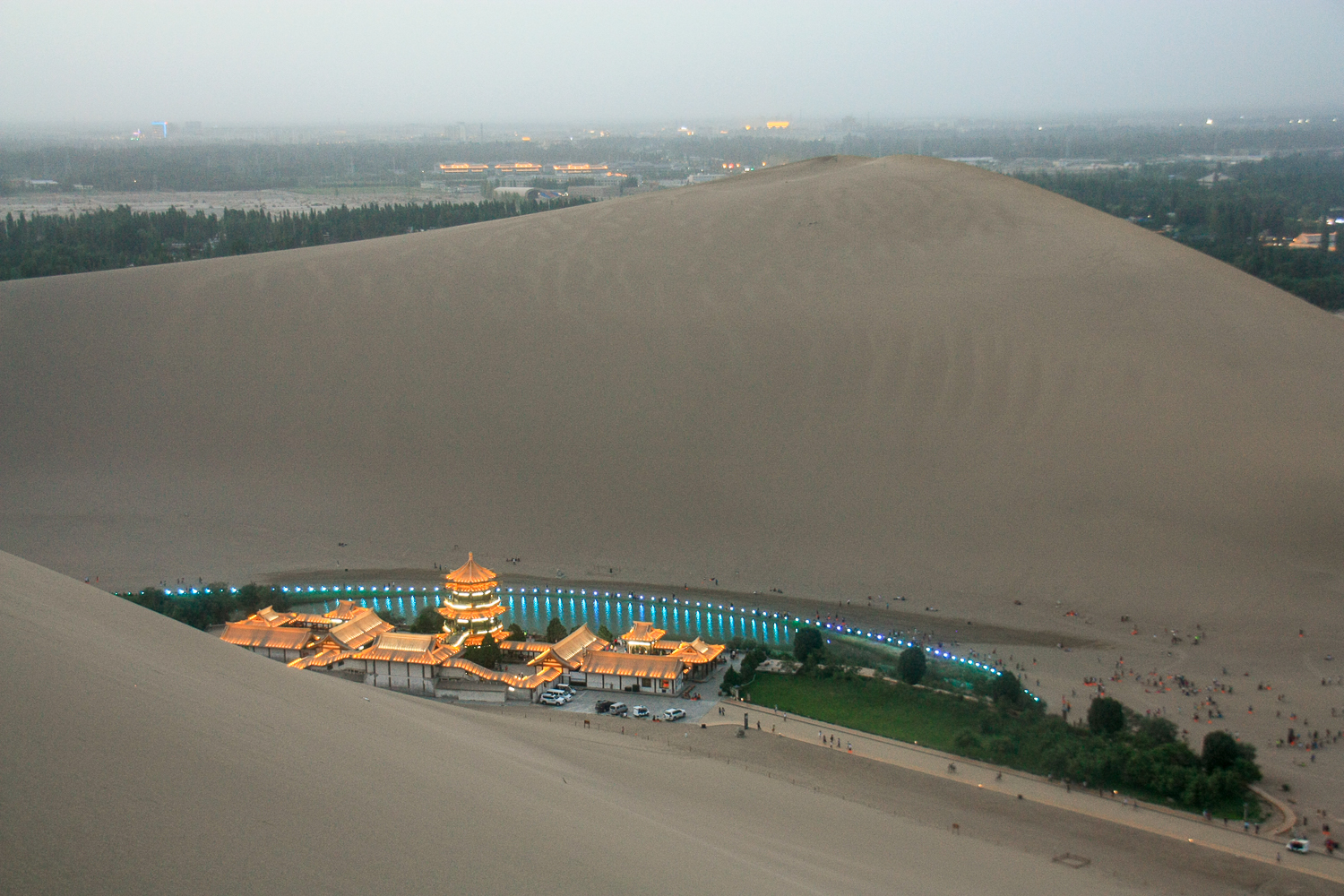 The next day, I headed off to the Mogao Caves 莫高窟, the largest collection of Buddhist cave art in the world, with a history dating back to the mid-300s and active usage for about 1200 years. Far different from what I saw in Sri Lanka! Isolated in the middle of the desert, nearly 500 caves were dug into a large rock formation jutting out from the flat landscape. The precision of each cave is quite impressive, with sharp corners and the appearance of four walls and a sloped, trapezoidal ceiling. 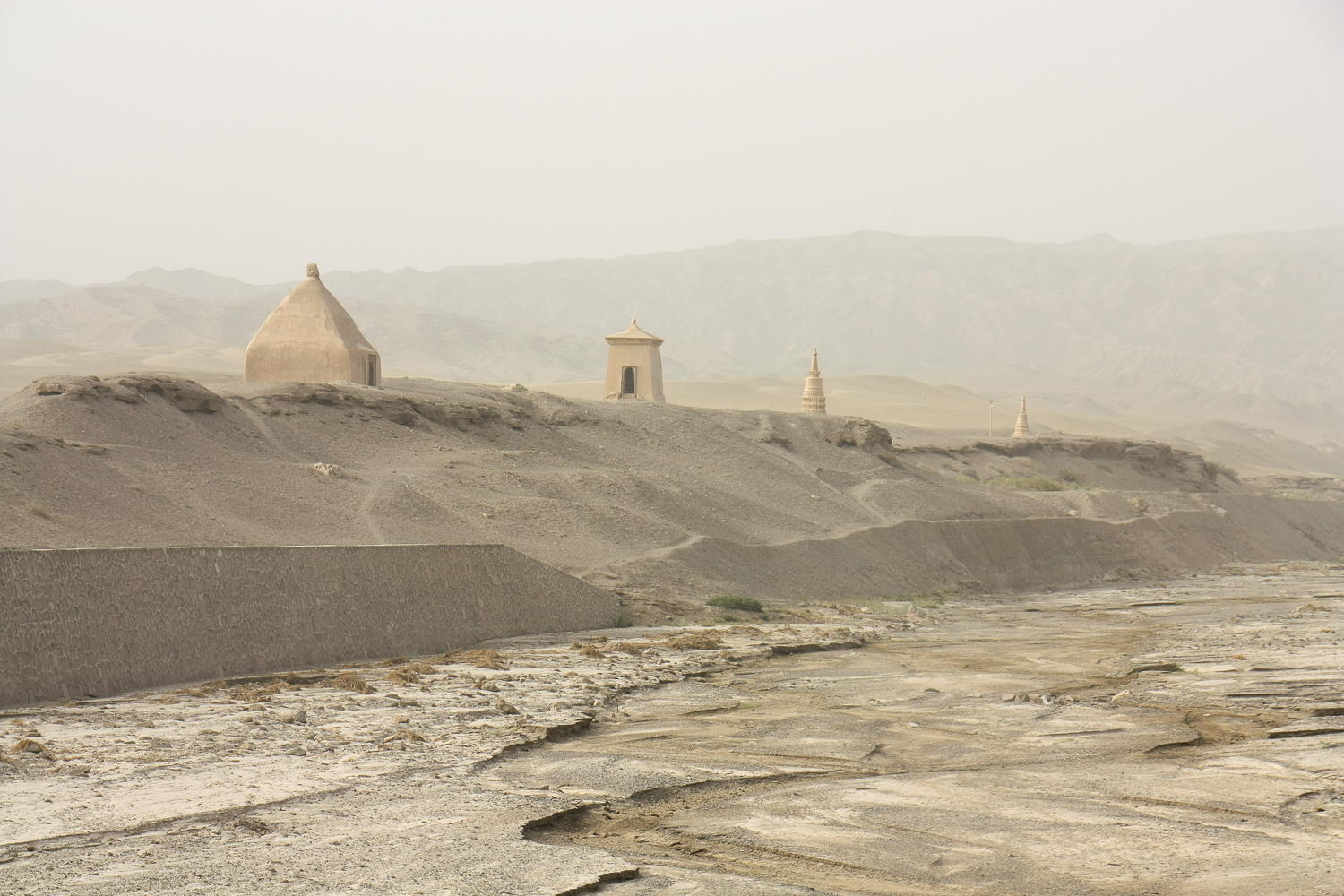 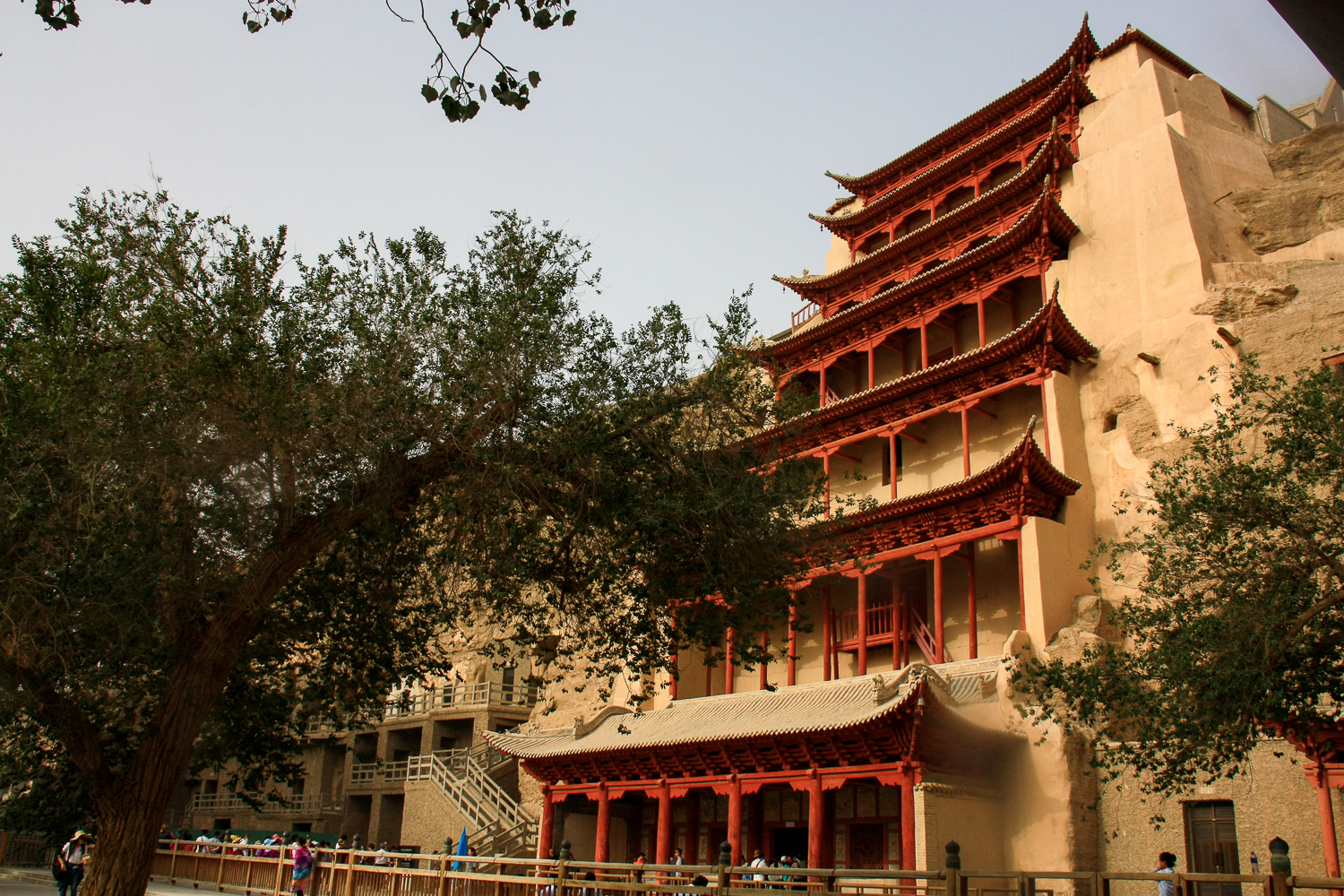 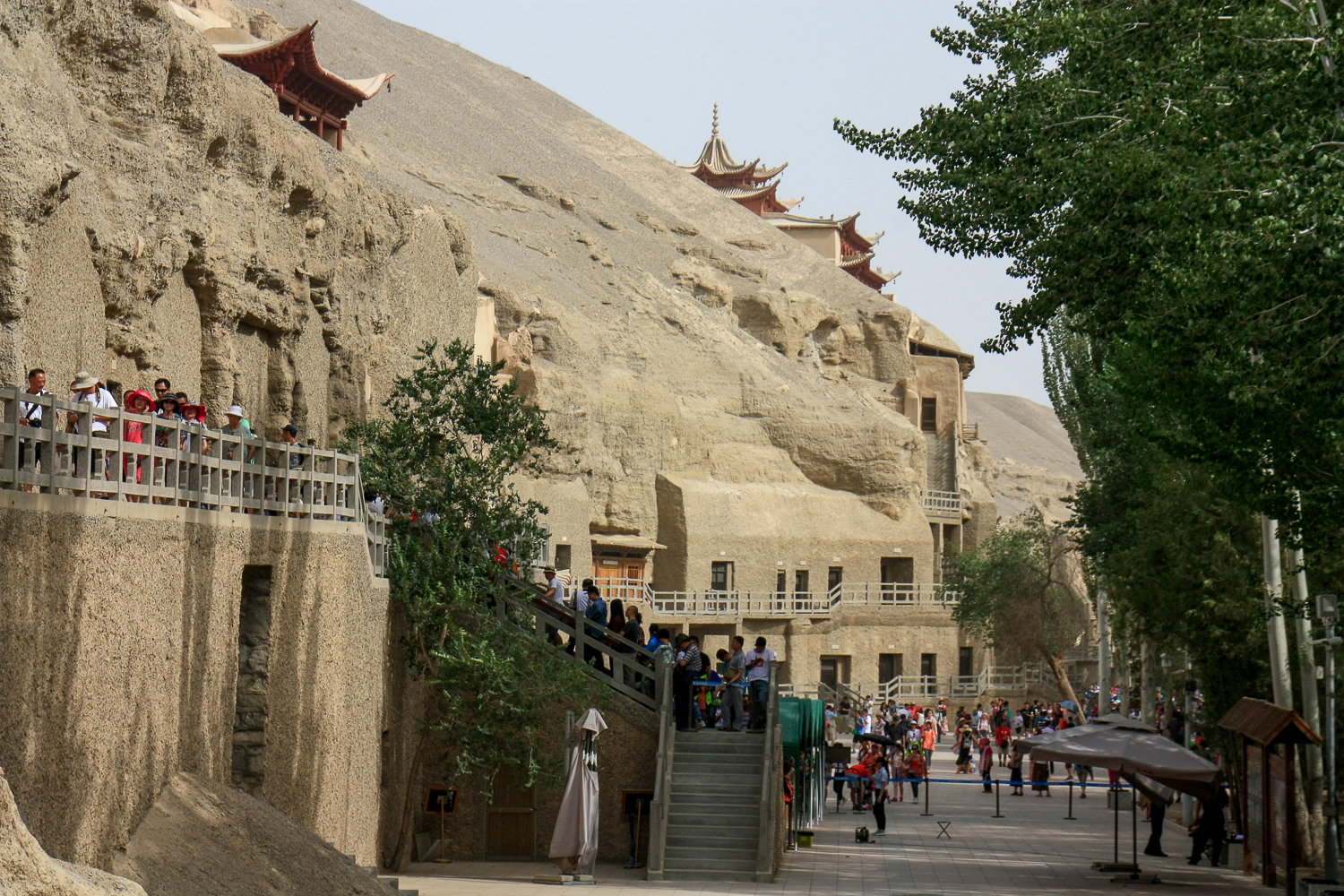 While the Mogao Caves were constructed as a Buddhist monastery, and most of the caves used to house monks, several of the notable caves (which I got to visit) were for worship. Each of the walls are plastered, then covered top to bottom with Buddhist iconography. Unfortunately, age and vandalism have started to destroy some of the art, with scratched-out faces the most egregious example. To my untrained eye, much of the patterned art looks stenciled — completely untrue. In fact, most of the art, patterned or not, was painted freehand, with only a few examples having been sketched onto the walls first. Crazy!

The centerpieces of the temple caves are pottery sculptures of Buddhas and prominent figures. One in particular reaches a pretty jaw-dropping height. Photos aren’t allowed, sadly…but a photo of a photo is. Heh. The adjacent museum has also commissioned full reconstructions of several caves inside the museum building, with sculptures tastefully replicated using the olden-day techniques of building a wooden frame, adding straw, then plastering it into the exact figure. 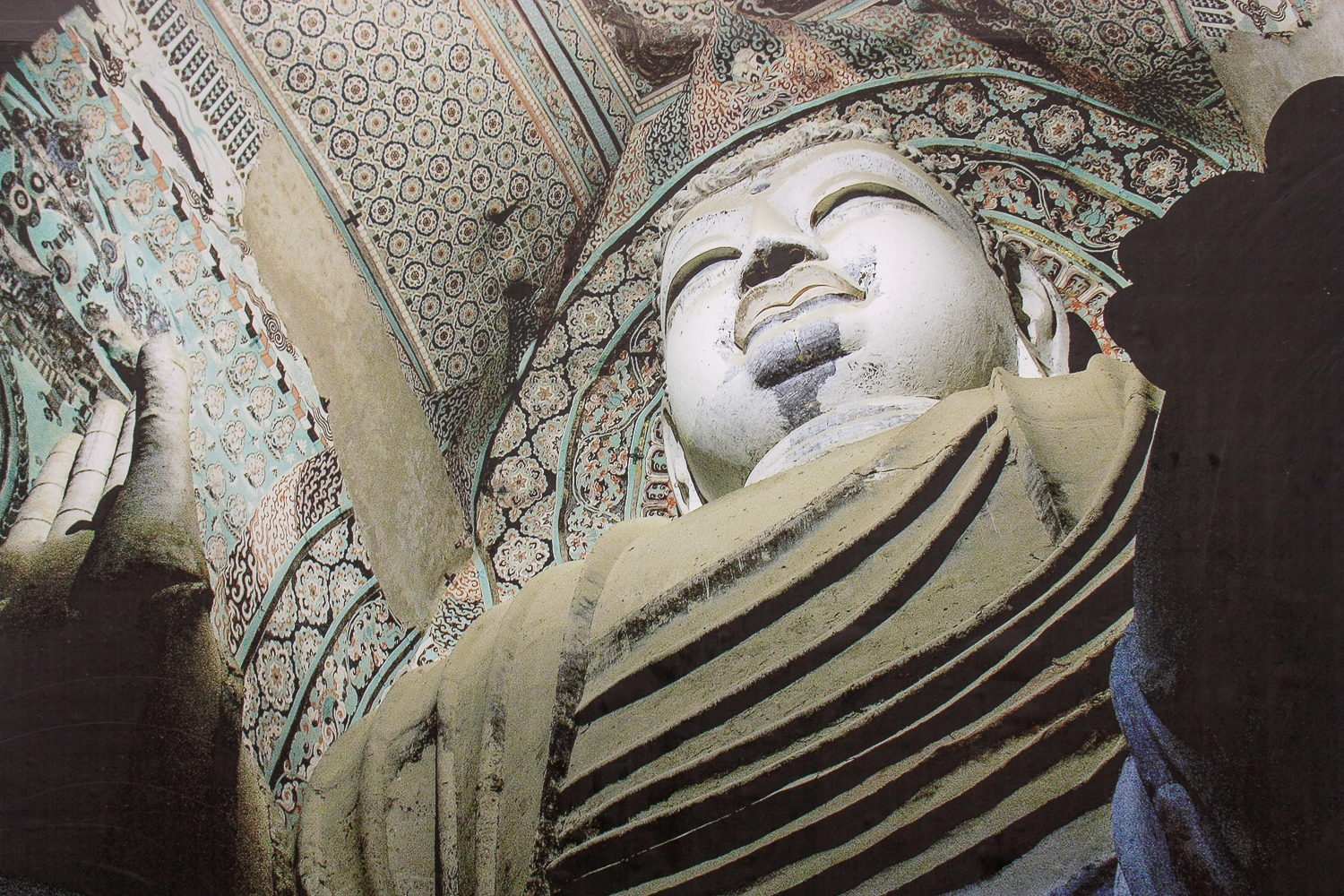 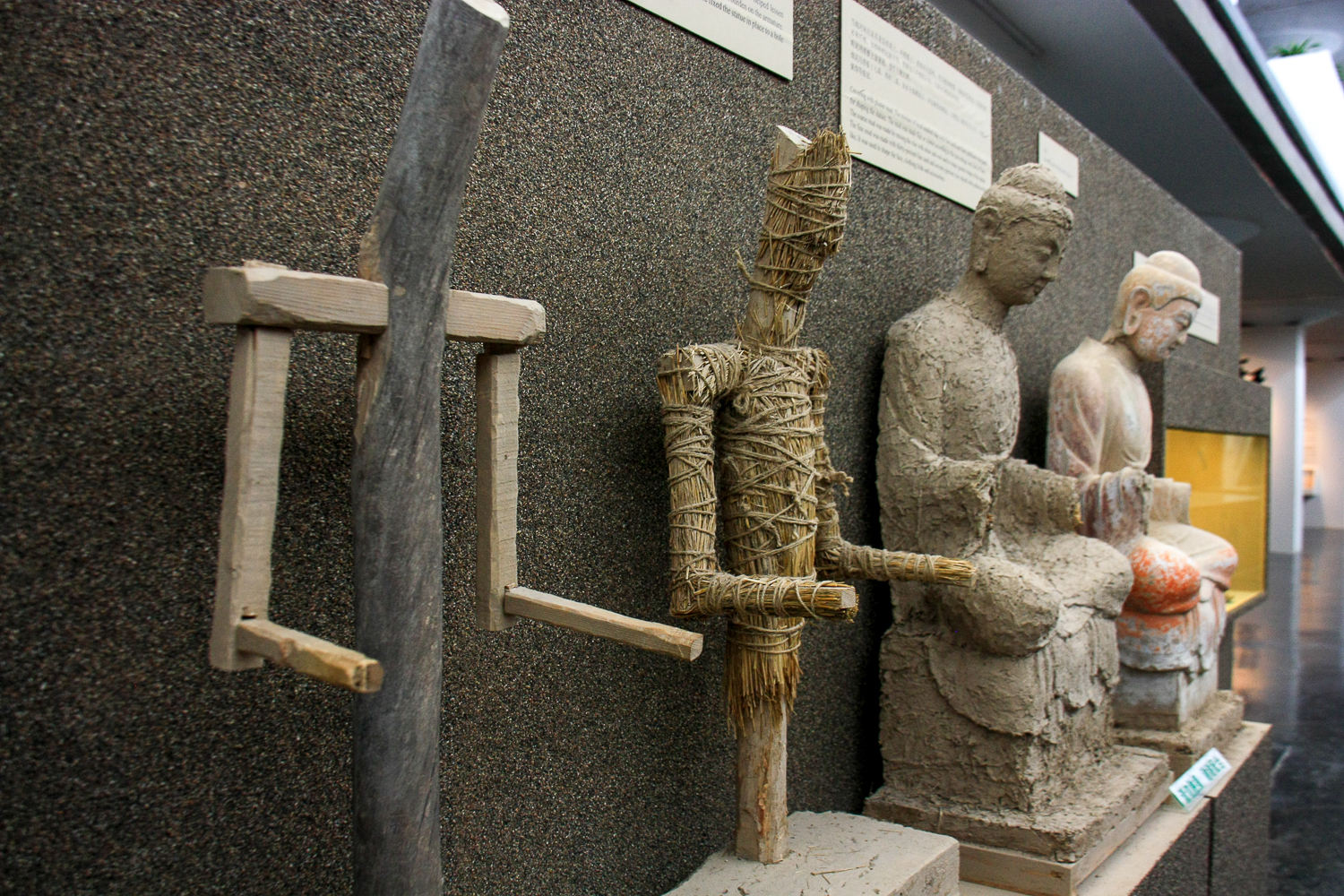 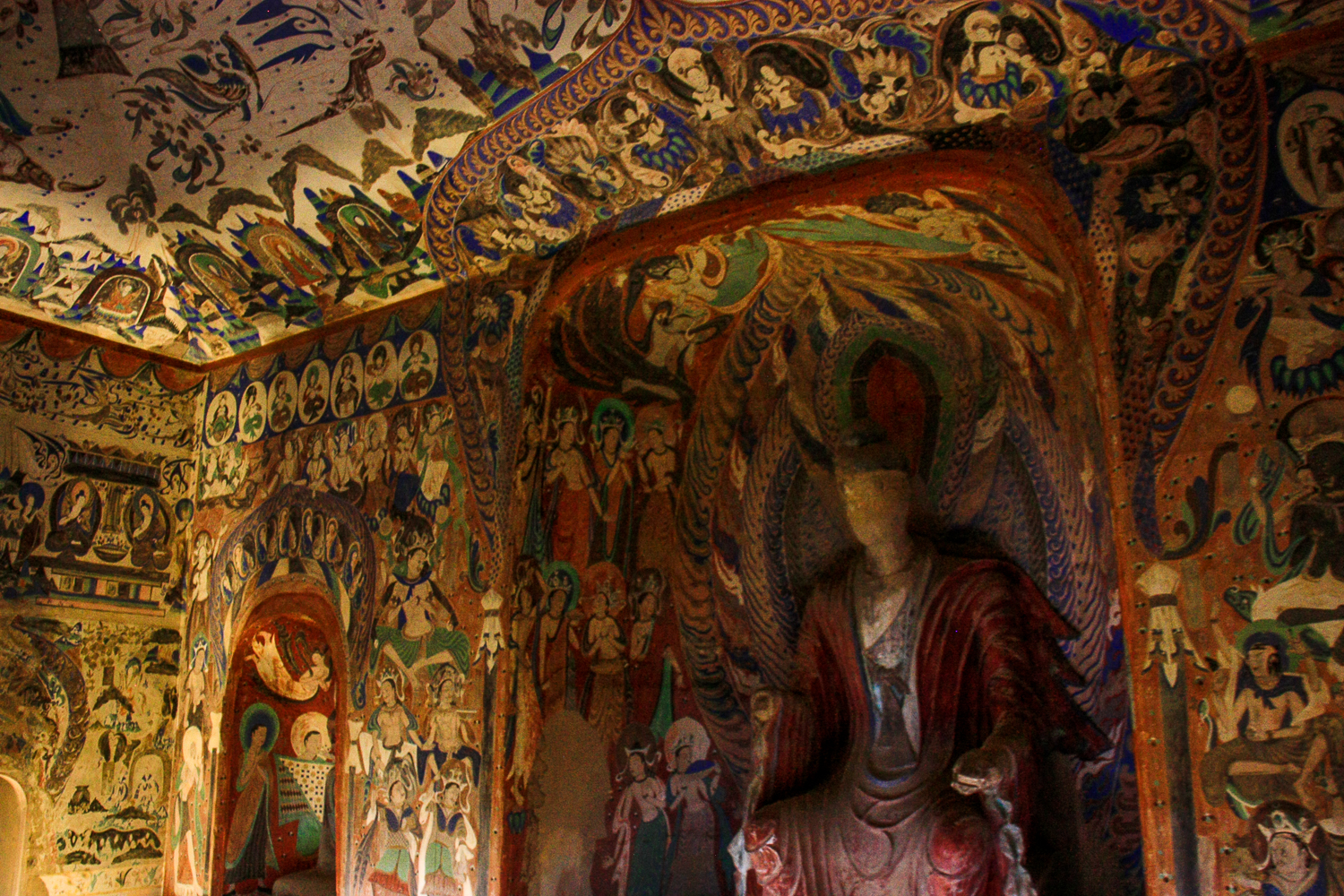 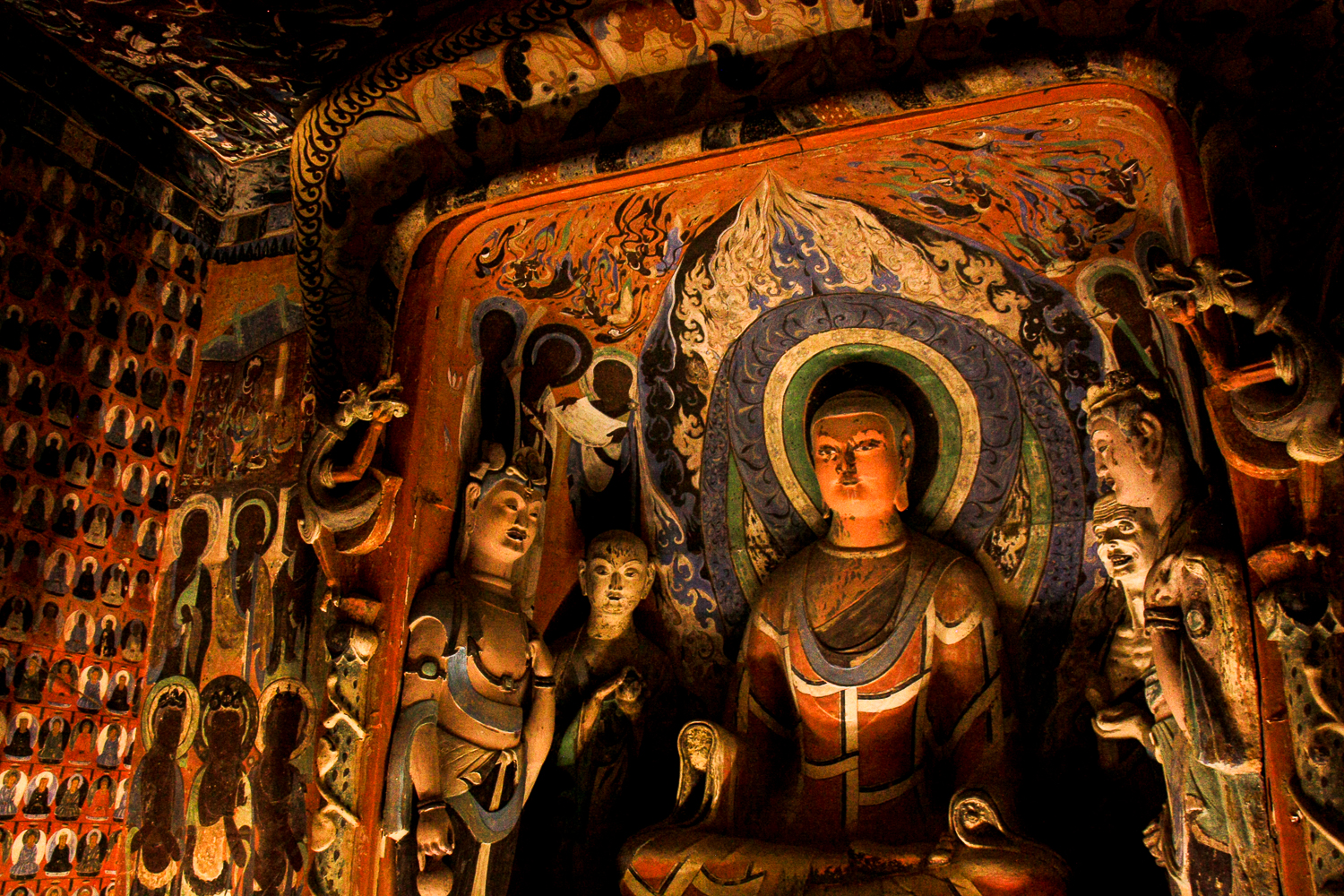 Other cultures and religions passed through the Dunhuang area: Bibles from Nestorian Christianity and scripts written in Tibetan are also found in the Mogao Caves museum. And as shown in the Dunhuang Silk Road museum, so many various different kingdoms had control over the area, each with its own different culture, art, dress, and currencies. 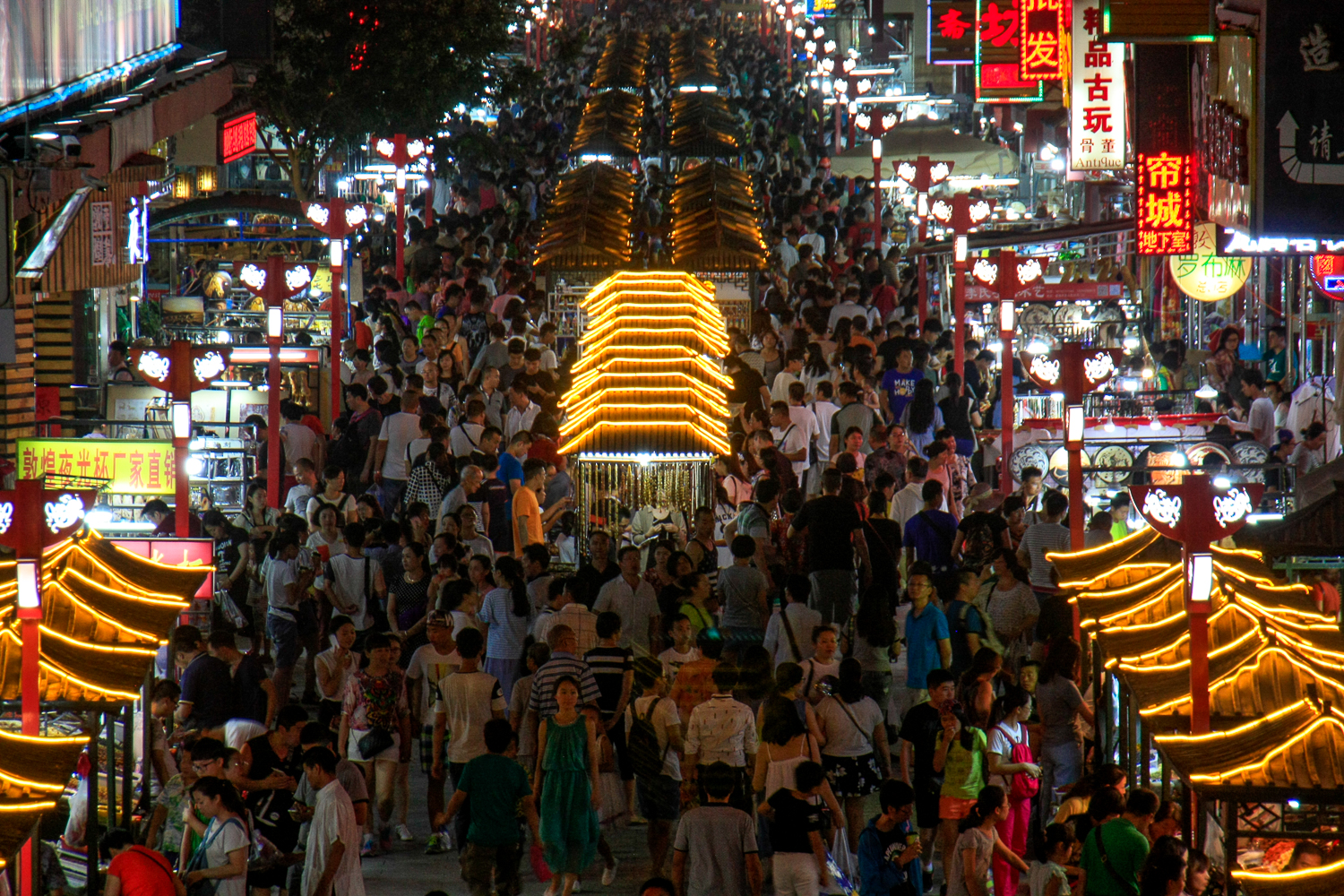 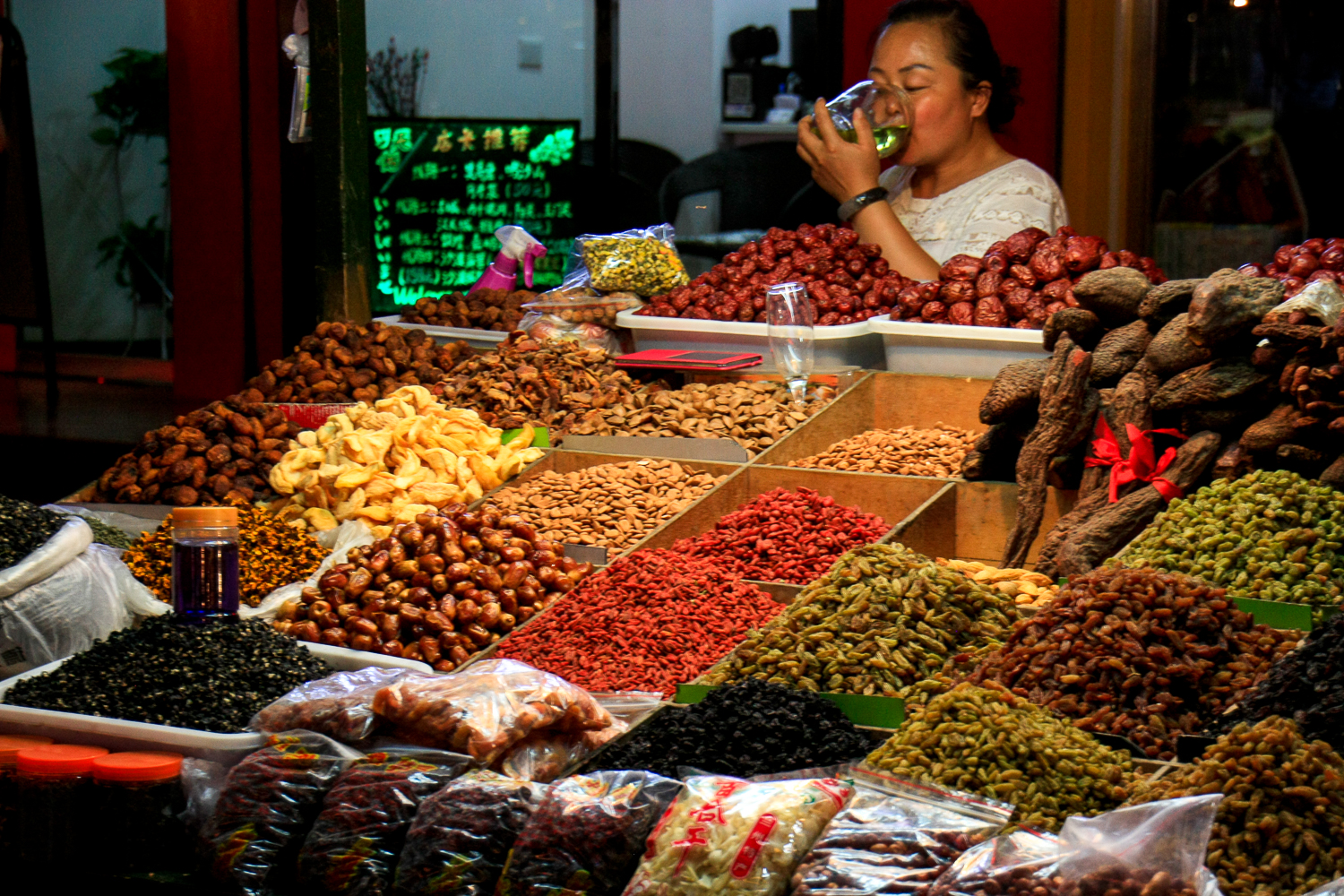 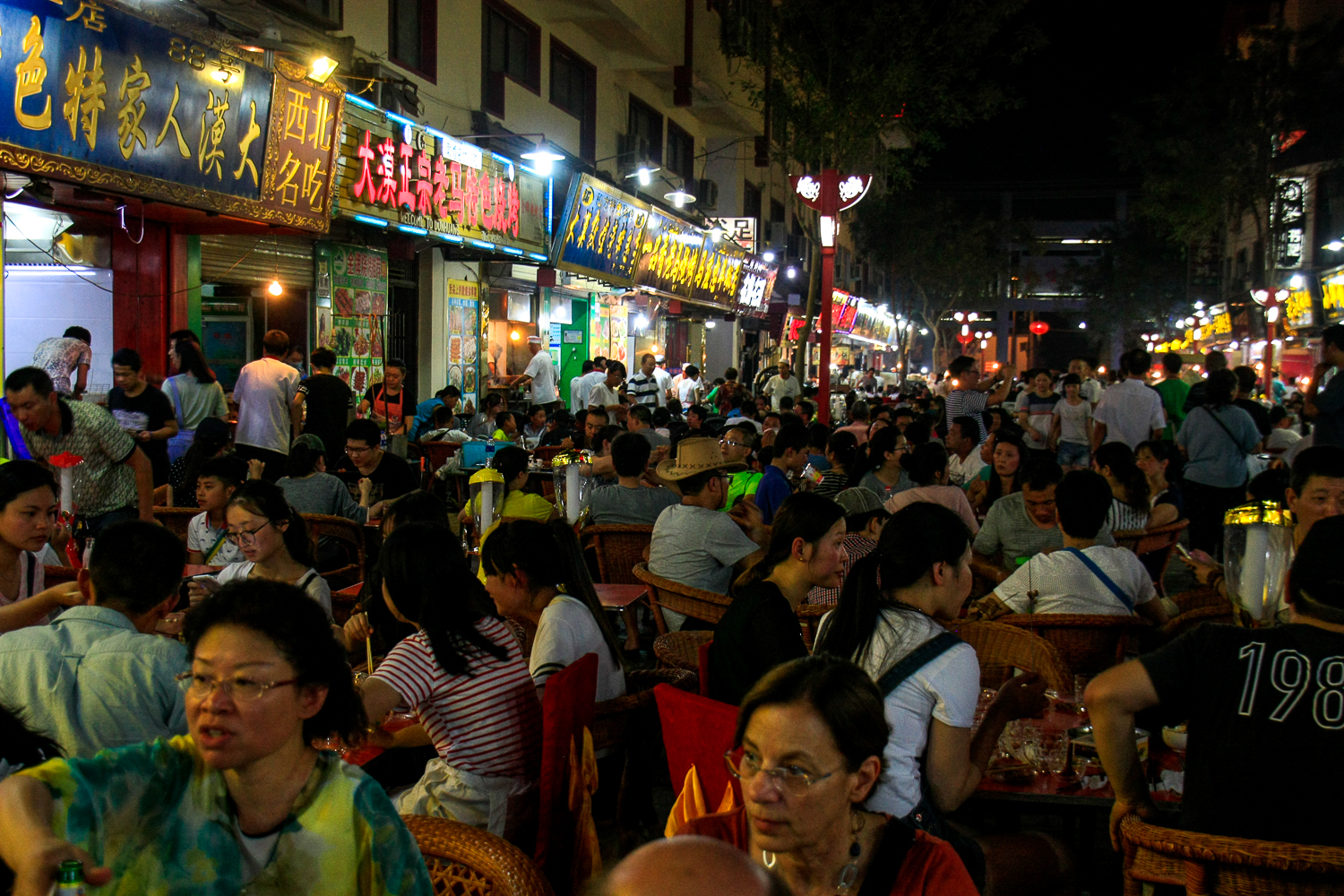 Dunhuang’s night market and surrounds is another culture-clash too, like a modernised, touristy Silk Road of food. While Hui/Muslim-style foods dominate, along with sellers of various fruits fresh, dried, or juiced, cuisines from all over China are represented, with even foreign foods visible for the first time in months for me: Hong Kong shaved-ice desserts, Korean bibimbap, Japanese food… Well, sign me up!