With extra time on my hands, thanks to still-inefficient but favorable public transport, I decided to do things a little differently. Heading into Kandy, Sri Lanka’s second-largest city, I opted to scour Couchsurfing and found a generous host in Leslie, his wife, Vasanti, and their young-teenage son, Jehan. They live in a village 12 km east of Kandy — not a terribly far distance, but with local buses, it meant being an hour out of the city. Despite the crowded buses, fellow passengers were super helpful and also a little surprised to see a foreigner on their rather untouristy bus route, making for a pleasantly peaceful experience, zooming by non-descript shops and the countryside.

Staying with a family in a decidedly normal, sub-sub-suburban neighbourhood away from general tourism was a refreshing break that provided a much clearer perspective of local life. Leslie and his family were incredibly welcoming, with Vasanti’s amazing cooking and their homegrown backyard bananas being an extra treat, and I was beyond grateful to be received as a friend, on super short notice and overlapping a night while they were hosting another couchsurfer too.

With Leslie at work, or at home helping Jehan with his math homework, and Vasanti seeming prepping food at all hours of the day (waking up at 3:30 to start a fire and make breakfast!), I busied myself reading or writing or watching TV courtesy of Leslie’s homemade satellite that I helped him install. Between all that though, we had some fascinating conversations about something that I had really wanted to learn more about, but was afraid to ask — and I didn’t even have to ask. 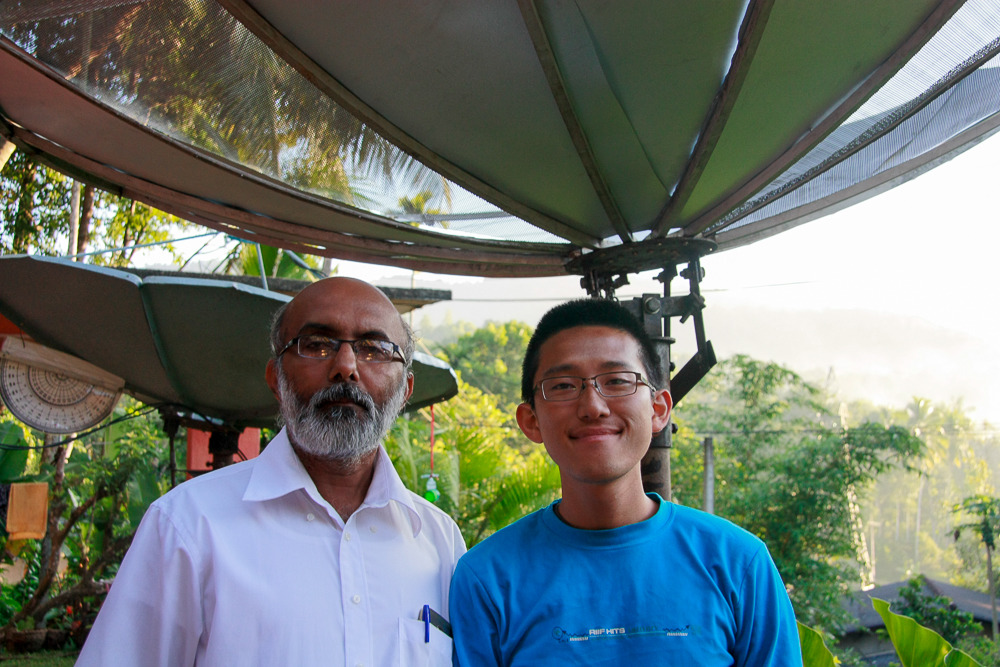 Sri Lanka’s suffered a lot! After a relatively peaceful period between Sinhalese and Tamils shortly after independence, a complicated series of past transgressions led the majority Sinhalese population and government to impose pro-Sinhalese laws and a pro-Buddhist atmosphere, which alienated the Tamil population (and within that, a large subset of Muslims) and even at points made some stateless. A burgeoning Tamil nationalist movement soon became the LTTE (Liberation Tigers of Tamil Eelam, the name of their proposed state), better known as the Tamil Tigers. There’s enough written about their reputation and how incredibly ruthless they were — human shields, assassinating an Indian prime minister and a Sri Lankan one, and practically inventing the concept of suicide bombing — that led to them widely being declared as a terrorist organisation.

Fighting lasted for over 25 years (with a joke of a ceasefire in the middle), and the war only ended in 2009. Leslie (Sinhalese, I should note) recounts life under constant threat. Taking a day off work every few weeks to defend his son’s school by standing at a corner holding a knife (against potential attackers with AK-47s!), alternating shifts with other kids’ parents. Making sure to get home before the last bus at 5:30 pm, since it was too dangerous to be outside after dark. (Even now, after the war, most bus routes still stop running after 7:30.) In Colombo, wondering if the bus you were on would be the next one bombed, as insurgents would daily leave packages on the luggage racks then slip off the bus. Fear of another large attack — like the one in 2001 where half of SriLankan Airlines’ fleet (the airline I took into the country) was destroyed by the Tigers.

Kandy was a somewhat safe haven in the center of the country, one of the rare places in the country where Sinhalese and Tamils were living, mingling together without much tension — northern Sri Lanka was primarily Tamil, and the rest primarily Sinhalese. But even Kandy wasn’t completely safe — the famed Temple of the Tooth, holding a relic of Buddha, was under attack in both 1989 (during a peaceful lull mediated by India, which was interpreted by one extreme pro-Sinhalese political group as Indian pro-Tamil imperialism, and thus went on a gun rampage) and in 1998 (by the Tamil Tigers, with a suicide car bomber killing many and causing much damage).

I’m glossing over a lot, but fast forward to 2009. President Rajapaksa took a hard line on integrating all groups as one Sri Lanka, and that meant ending the conflict for once and for all. Heavily arming his forces with modern equipment, they swept up all Tiger-controlled territory, eventually killing every last one of their leadership in May 2009. Leslie remembers the joy of the next day. No one feared another bomb. People were free to travel again, without their passport being looked at suspiciously — and Leslie’s family has definitely taken advantage of that, going all over Southeast Asia. People would visit again. Sri Lankans from all corners of the country could travel to every corner, and cities inaccessible to one group for years on end are now open again.

I got to hear one side of the story. But what of the Tamil side? Integration hasn’t gotten any better with shady political dynasty after political dynasty (the alternating reigns of multiple Bandaranaikes and Wickremesinghes come to mind) and hard-liners like Rajapaksa, beyond the recent creation of a semi-autonomous Tamil government thanks to a central government of very recent newcomers. The Tigers were defeated, but were the issues that led to their formation addressed?

What about the fact that the Tigers were all killed, along with a high civilian death count? There’s a UN commission going on right now for human rights violations, not just against the Tigers, but against the government. And are Leslie’s fears founded, that Sri Lanka may split into three countries (Sinhalese Buddhist, Tamil Hindu, and Tamil Muslim), because of a change in governing (Sri Lanka just elected a new president, replacing Rajapaksa) that advocates for accommodation over integration?

Leslie contends that the outcome of the war was worth it. The crushing oppression of living under war has finally been lifted, and people can move on with their lives. And that’s true! How amazing is it that not long after needing to stay viligant and suspicious, that he can host strangers from Couchsurfing on the regular? That people all around Sri Lanka have been so welcoming and helpful? And of course, with the rapid development comes increased opportunity, prosperity, and upward mobility — that’s definitely true in the mostly-Sinhalese south, from what I’ve seen. Despite any remaining problems, people have hope.

Does that right a potential wrong though? It’s important to hear the other side… and I so dearly wish I had more time to do so, especially by visiting the mostly-Tamil north (Hindu) and east (Muslim). I want to know, do they still feel marginalised? Are they developing and repairing as fast as the south? Do they have hope and optimism?

On the other hand, there’s even an ultra-left Sinhalese nationalist movement too. They even had a Buddhist monk assassinate a Sri Lankan prime minister because he wasn’t left enough. Or something. Yes, there are hard-liner Buddhists, many of whom are in government, and some of whom even advocate violence.

All this in a tiny little country. And I haven’t even covered the devastating tsunami of 2004 that killed 35000 and displaced half a million! (I witnessed no visible signs of remaining damage and barely even heard a mention of it while on the coast, a testament to their speed and dedication in rebuilding.)

Given that I arrived in Kandy directly after walking up and down Adam’s Peak, I was pretty tired and sore, and that feeling stayed for the next four days — the rest of my stay in Sri Lanka. I took it pretty easy, exploring the stately Temple of the Tooth and watching a puja there (everything happens behind closed doors, all a visitor sees and hears is Kandyan drumming), eating a ton of pastries, and ambling next to the beautiful lake. 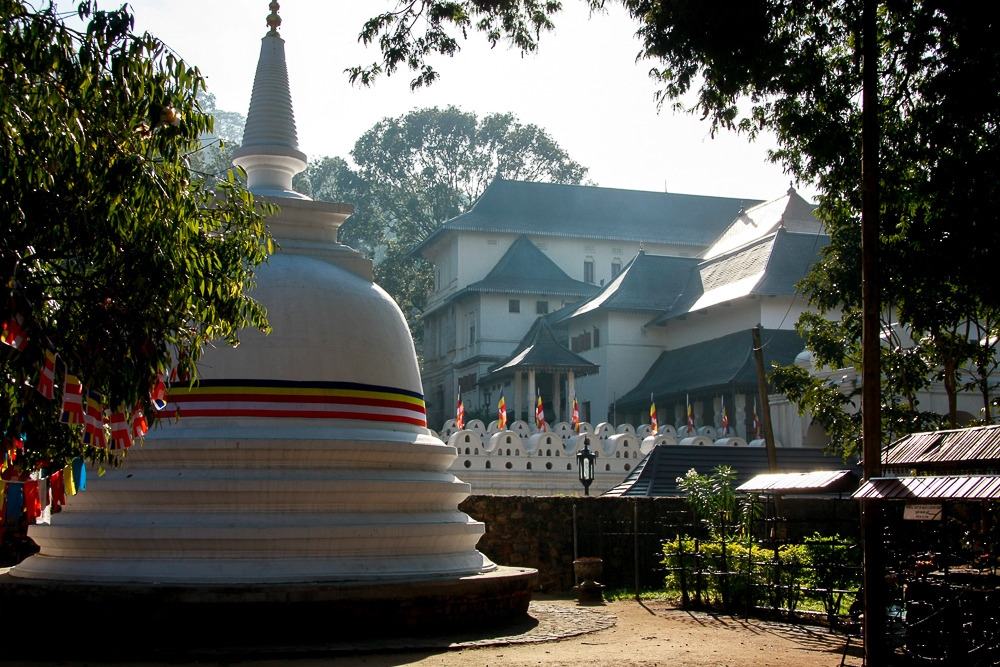 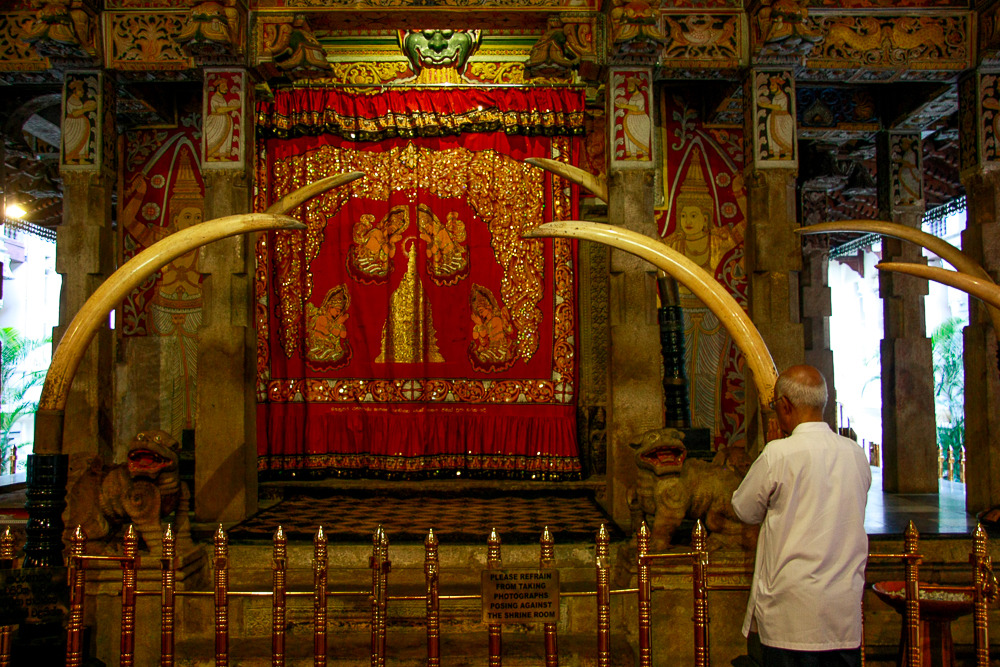 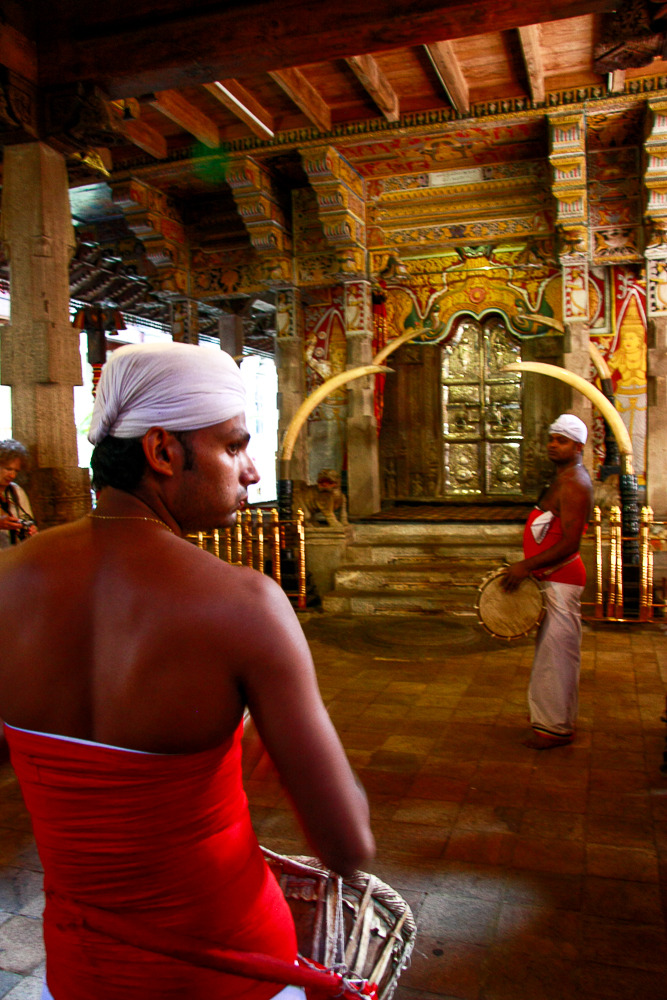 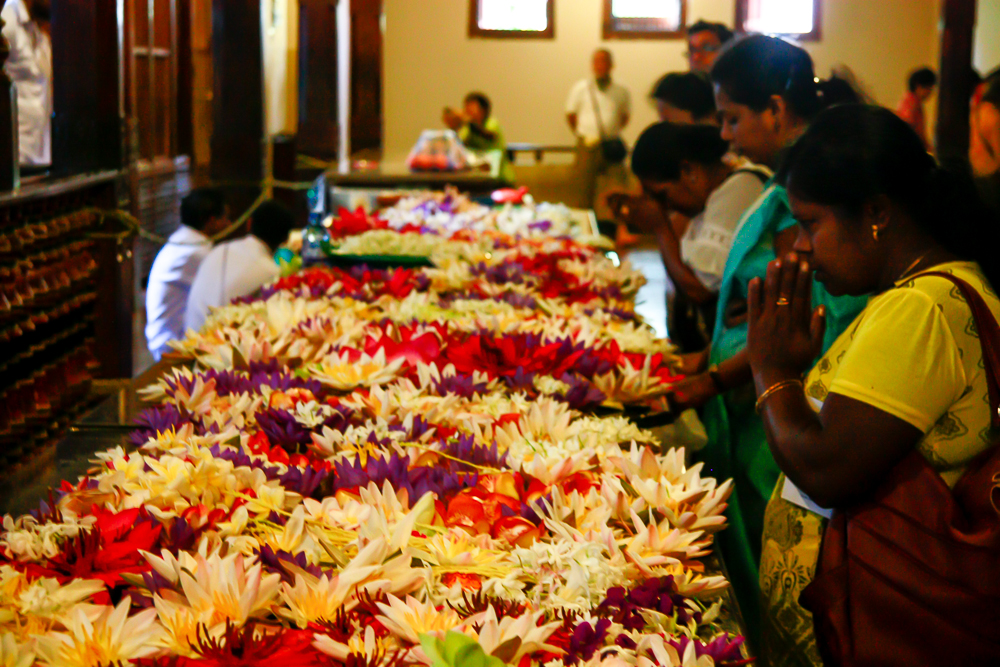 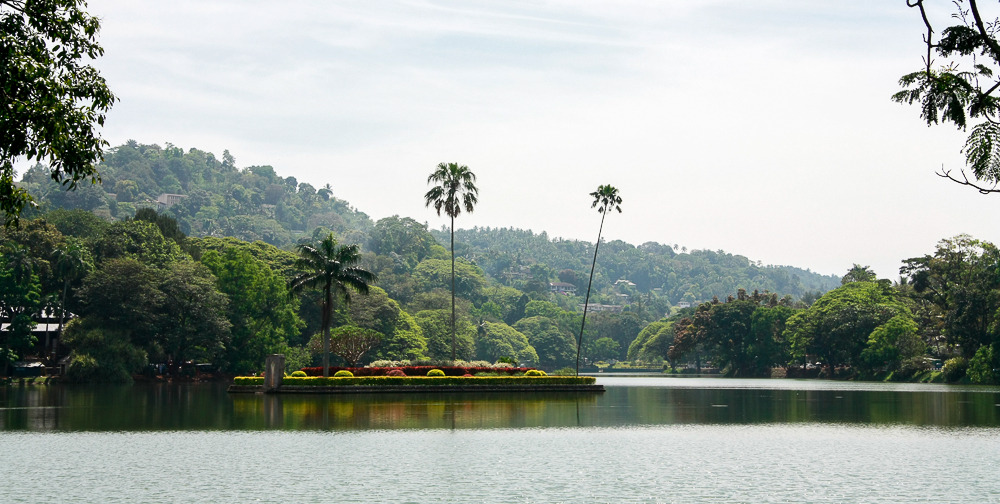 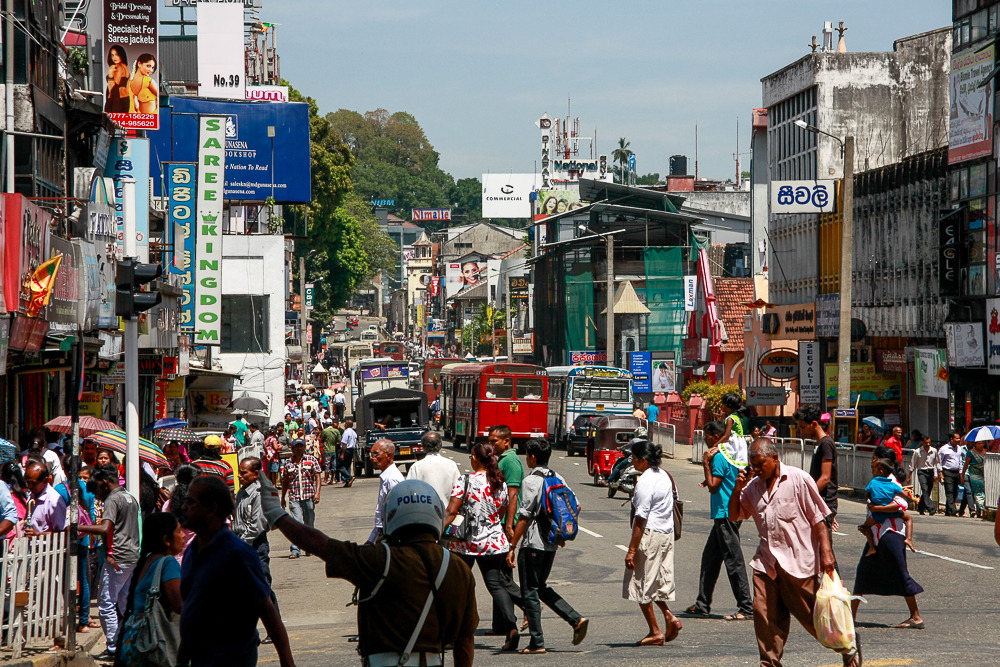 I also took a bus out to the Peradeniya Botanical Gardens, a sprawling and very green estate with leafy green “boulevards”, curvy trees, gardens of all sorts, mischievous monkeys, and like Colombo, plenty of canoodling couples. But mostly I just wanted to nap, and that was a great place to do it, with plenty of shady spots. 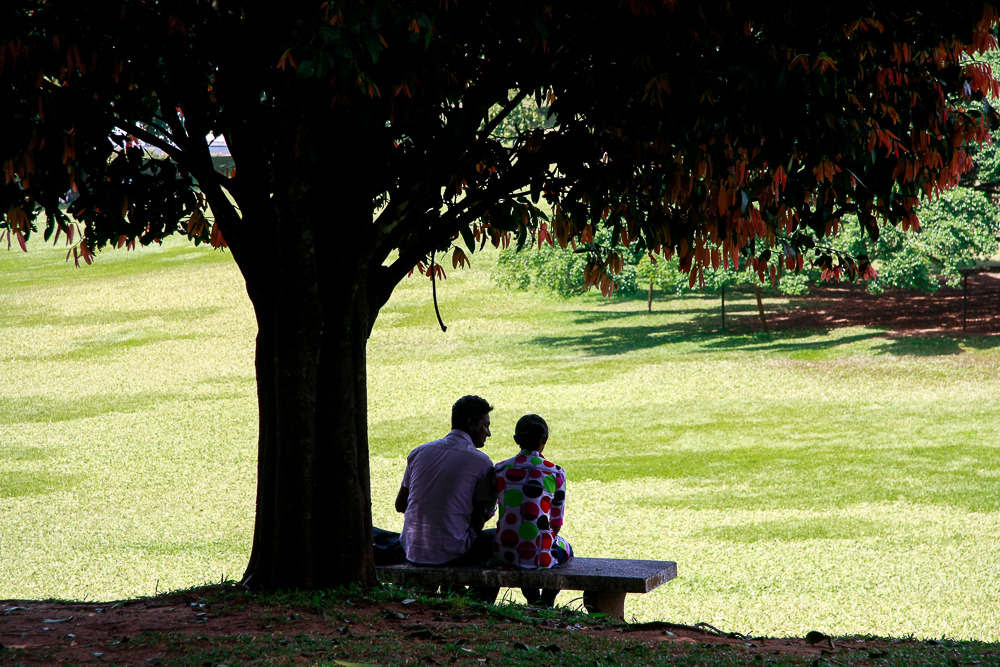 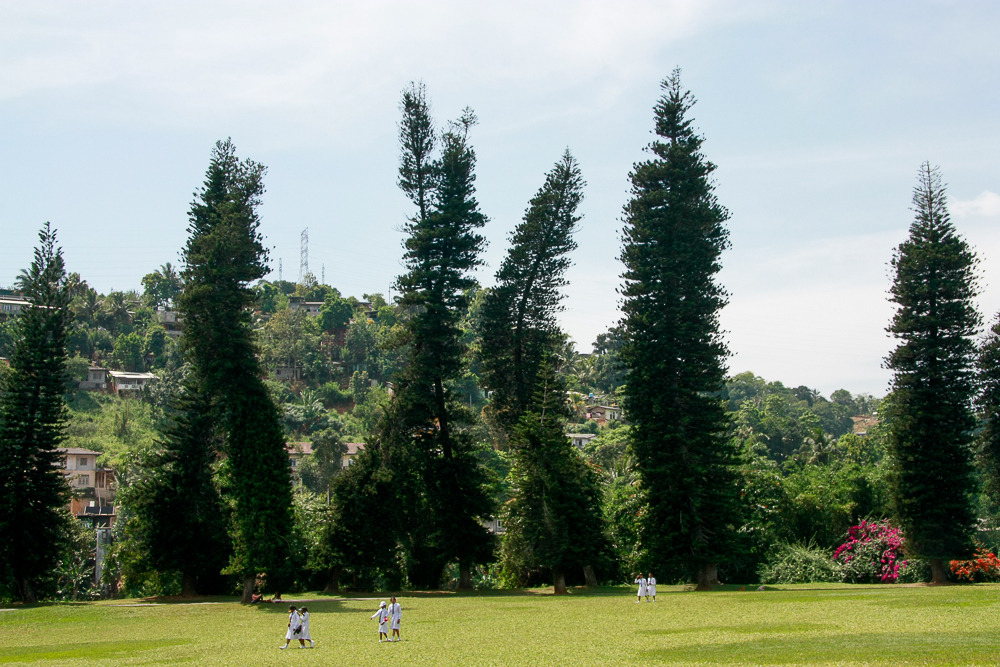 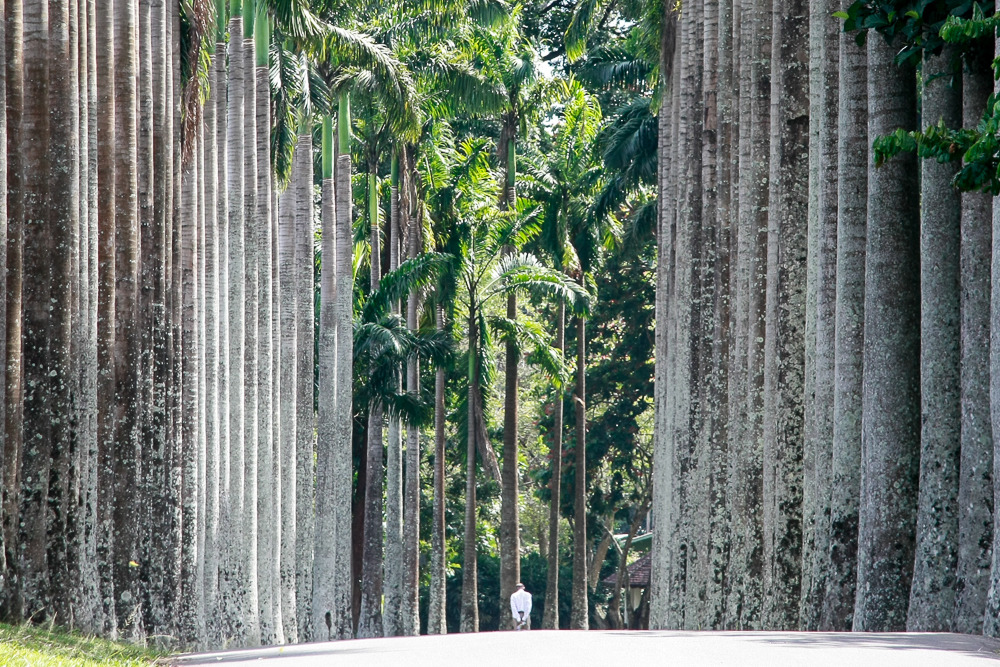 After saying goodbye to Leslie and his family, I continued slightly north to Dambulla, home of the cave temples and a very gaudy looking Buddhist museum topped by a 30m tall giant Buddha. I’ll let the picture do the talking on that part. Yeah. 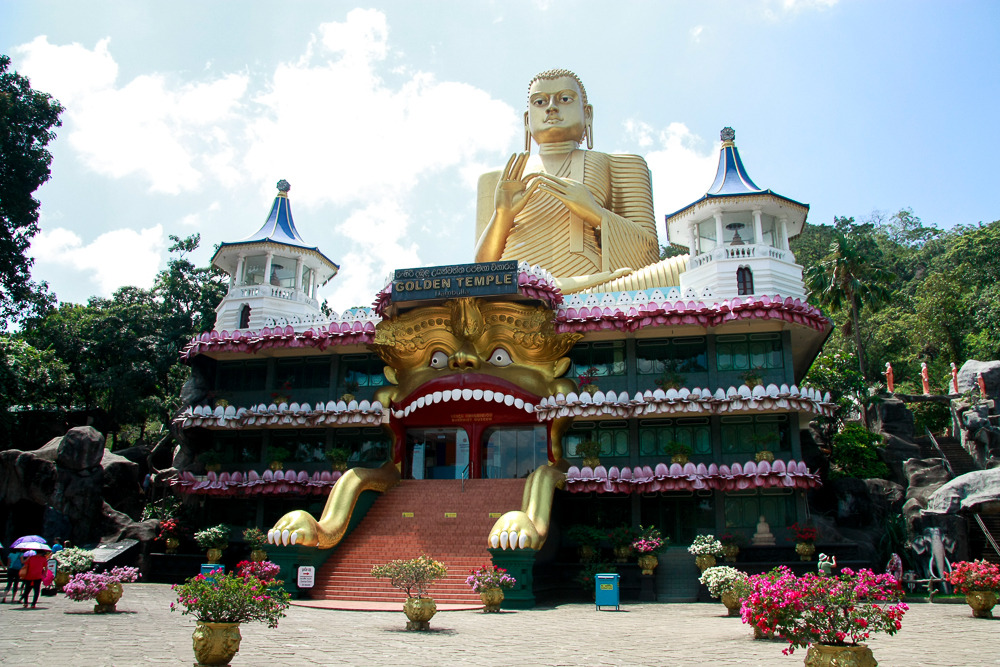 The cave temples were constructed by an ancient king who hid from his enemies there, as gratitude for its protection. It’s an incredible sight, with every inch of five caves wall, even the ceiling, covered in murals with repetitious patterns, mirroring the repetition motif of the many statues of Buddha scattered around. 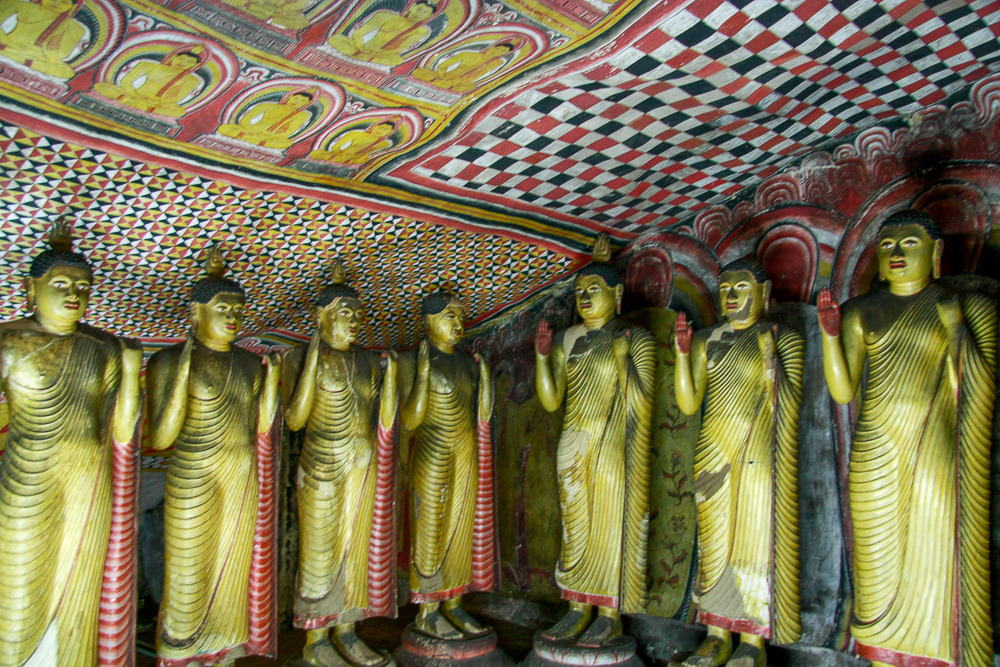 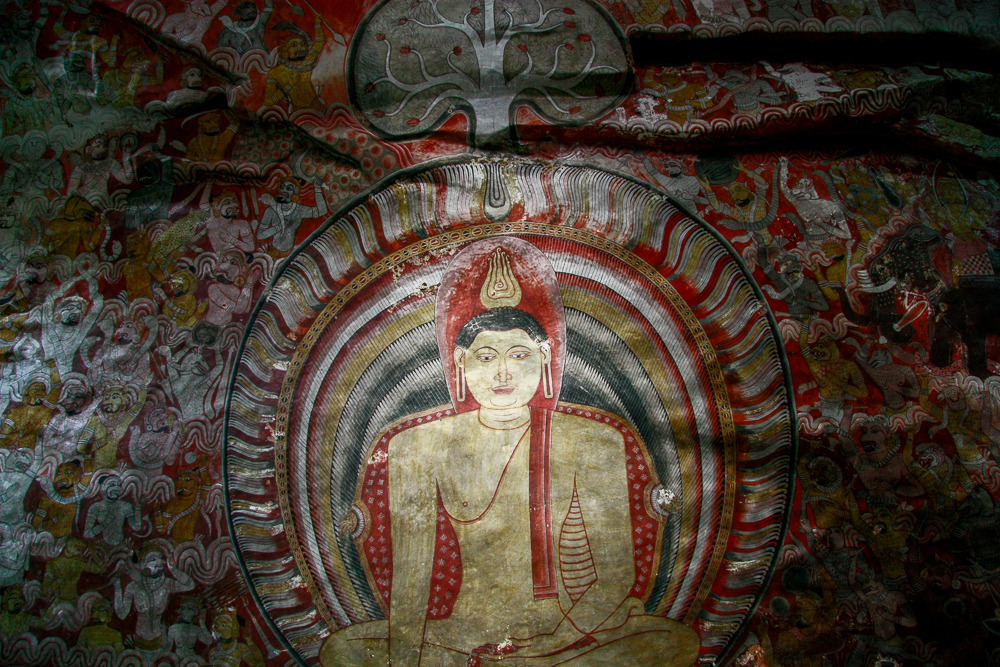 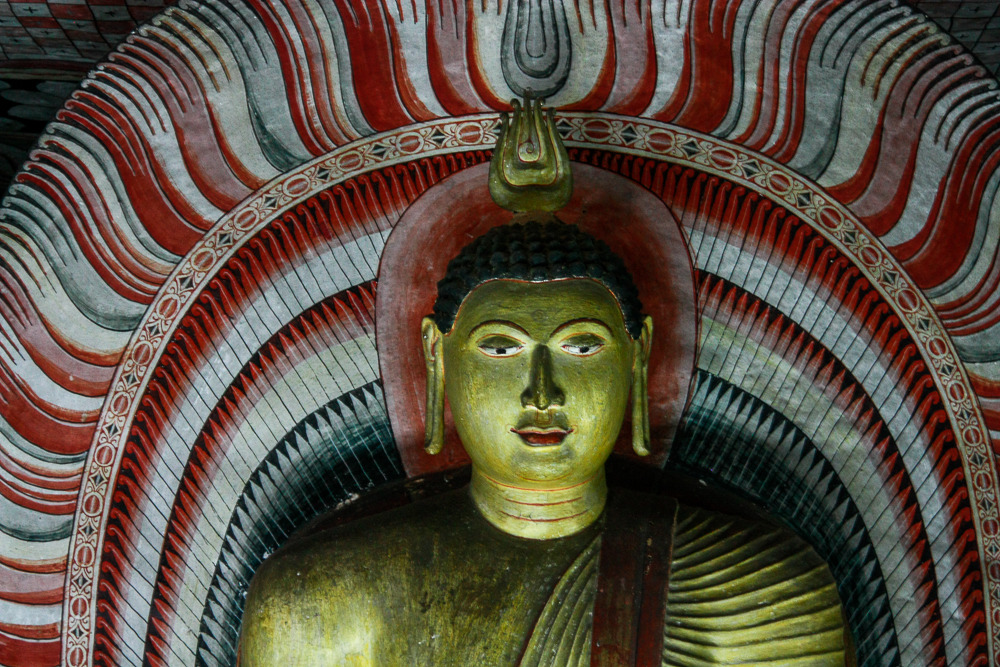 A mere 15 km from Dambulla is Sigiriya, best known for Sri Lanka’s most impressive, most famous (and crowded, and pricey) landmark, Sigiriya Rock, a giant monolithic natural block rising from a dusty flatland. In, around, and on it is the citadel constructed by Kassapa, a man who threw a hissy fit when his father, the king, declared his brother Mogallana heir to the throne. Kassapa staged a coup, threw his father in a chamber and left him to die, while his brother fled. Kassapa chose to build his citadel in as impregnable manner as possible, and what better way to build it on an extremely high outcrop, able to attack any invaders from above? (Ironically, his downfall came when his brother regrouped to attack, and Kassapa descended from the top to fight him in an act of hubris.) 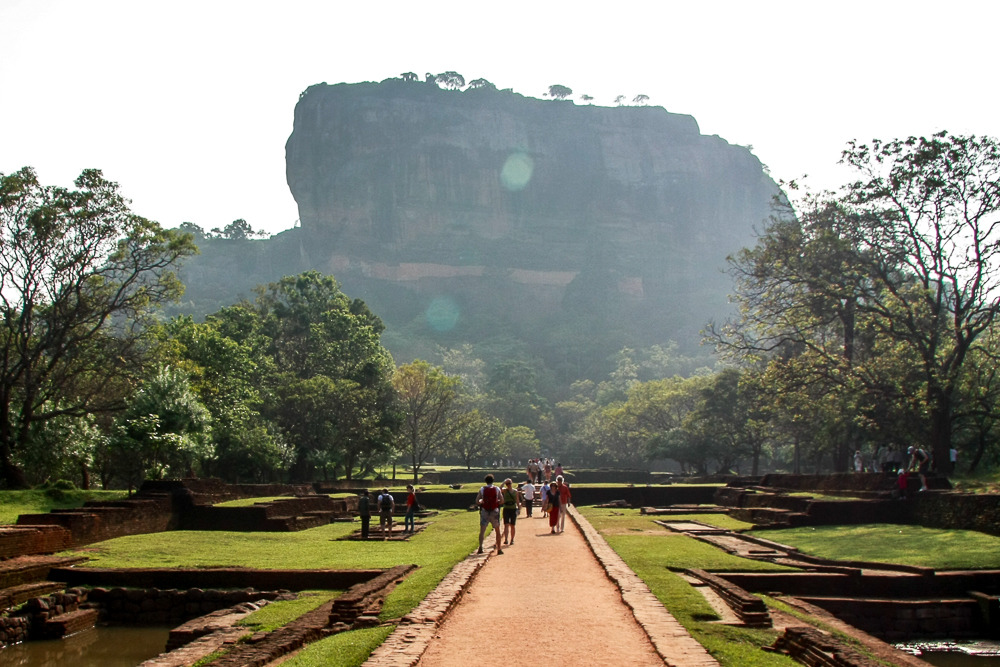 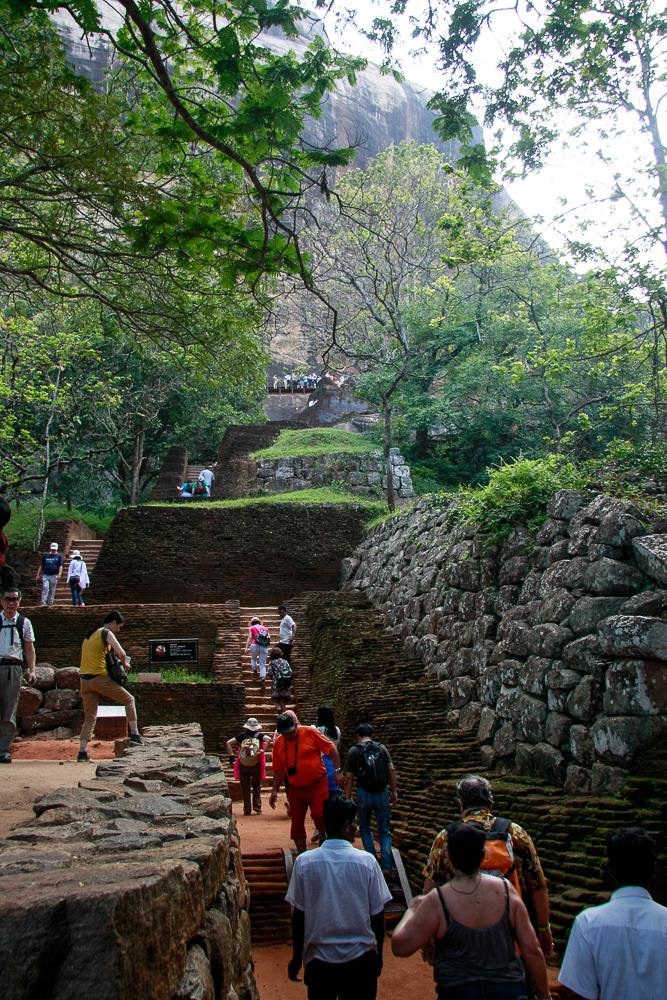 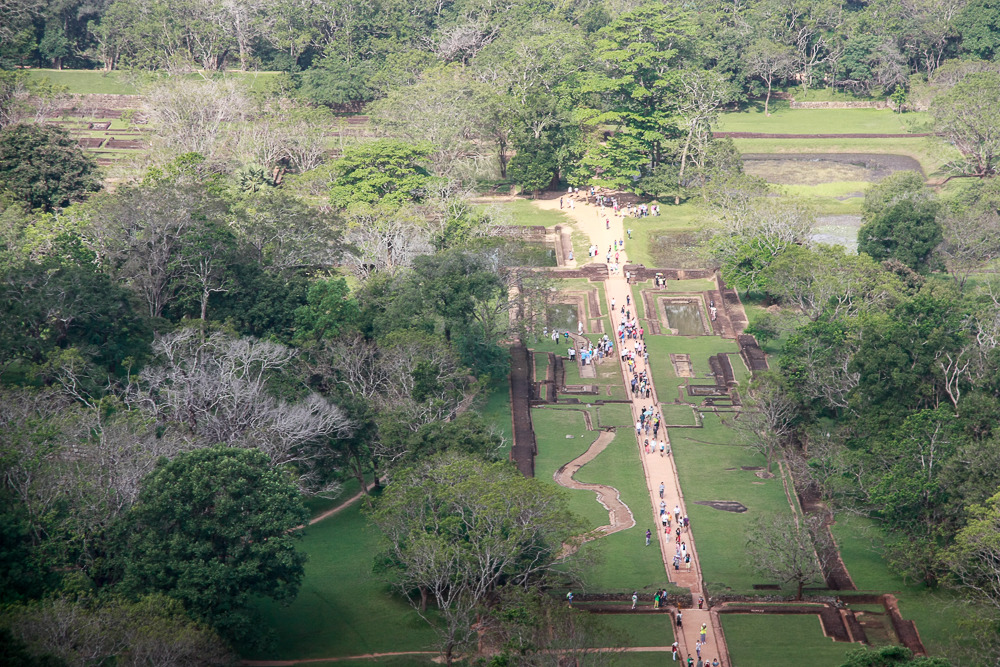 After that whole saga, the citadel was handed to monks, who made some cave paintings halfway up the giant rock. The whole complex is mostly ruins now, but you can still see intricate water gardens with pressure-based fountains, rock shelters, audience halls, and of course, the very top, with the lion-flanked and heavily eroded staircase leading up to it. The labour going into everything is extremely intensive — just the idea of using so many small bricks, of creating so many steps up a sheer cliff face, it’s mindboggling. 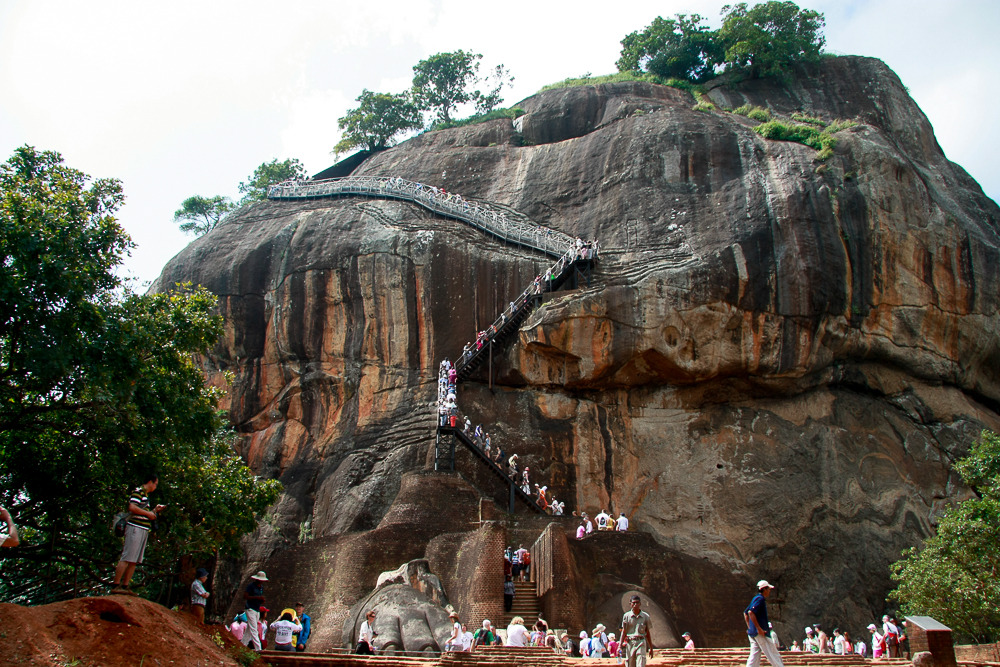 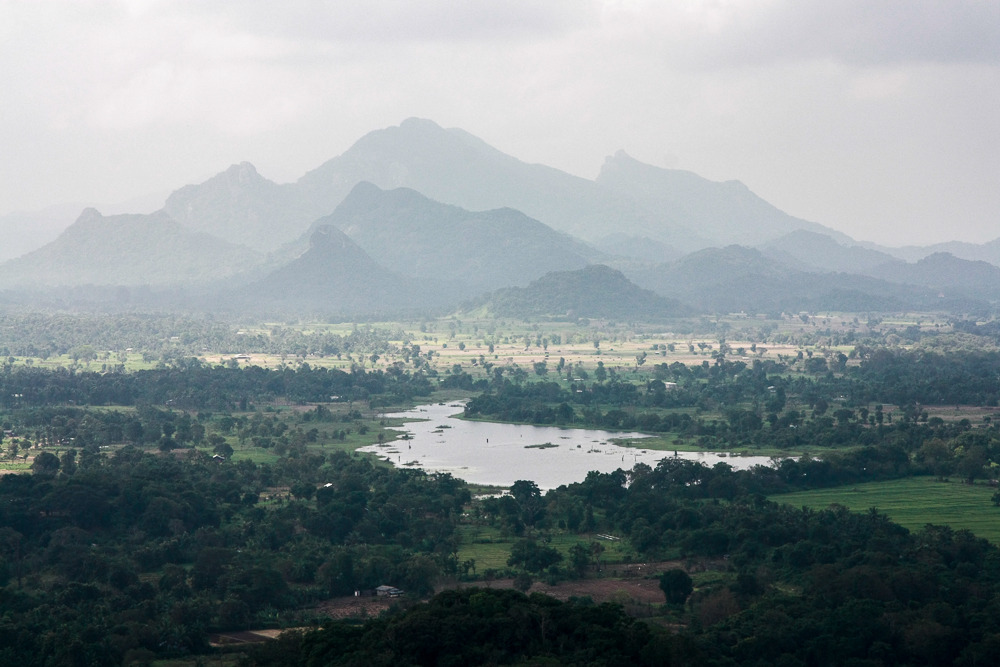 I felt like I just got started! Such a complex country with so many different landscapes, varied wildlife, multiple religions and cultures, multiple peoples. All Sri Lanka. No matter the ethnic and religious background of who I encountered, I received nothing short of hospitality.

So much more kottu roti to eat. And hoppers, and pastries, and deviled chicken, and curry, and fruit, and stuff I could just eat forever.

With just 11 days, I only scratched the surface. Next time.

One thought on “Optimism”