I returned to Kyrgyzstan in a mad dash for the World Nomad Games up in the north of the country, but not without time for a couple of short but worthwhile stopovers: first for Kyrgyzstan’s independence day celebrations in Osh, and then a double-overnight in the walnut-forested hills of Arslanbob.

Being Kyrgyzstan’s 25th year of independence, I imagine things must have been considerably ramped up this year! In front of the Lenin statue in Osh, large performances were held in front of a large crowd that most likely included a few of the country’s dignitaries. The more important celebration was probably in Bishkek, but the sea of costumed dancers, flagbearers, singers, and musicians was impressive nonetheless.

Since the entire event was in Kyrgyz, my understanding was quite limited, but it seemed like a runthrough of Kyrgyzstan’s entire history, from the traditional yurt days to the advent of communism (portrayed very much as a folly in a skit) to Kyrgyzstan introducing its own banknotes. Most of this was presented in the form of skits, followed by dances (lots of hand motions, little feet movement) and songs, except for some reason all of it was lip-synced (and in the case of both the orchestra and women’s drum troupe, entirely motion-synced) in a rather unfortunately unconvincing manner. That aside, it was a very worthwhile showcase of Kyrgyz culture. 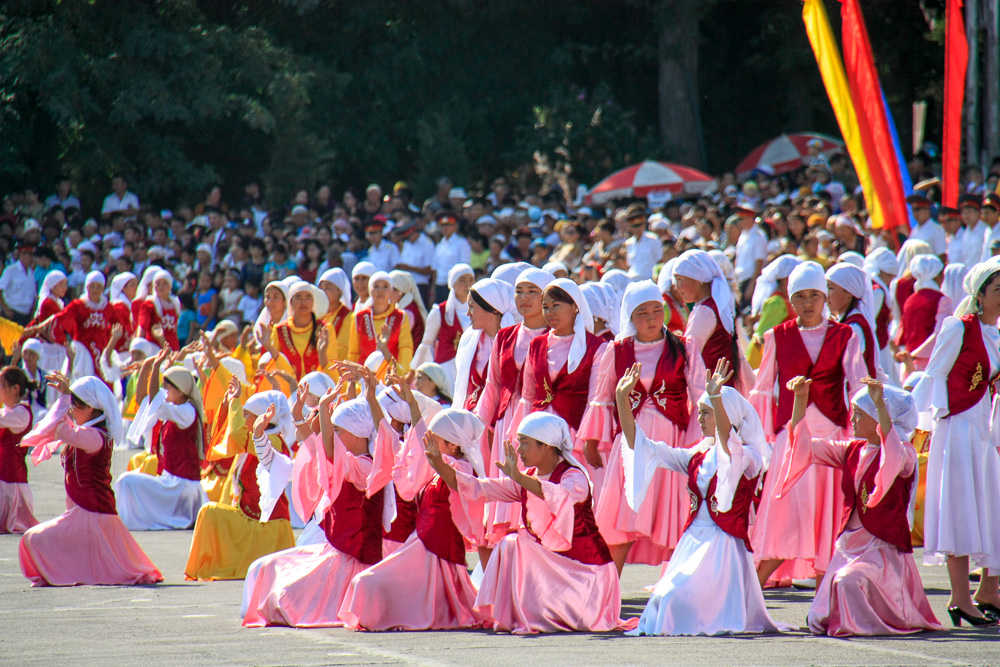 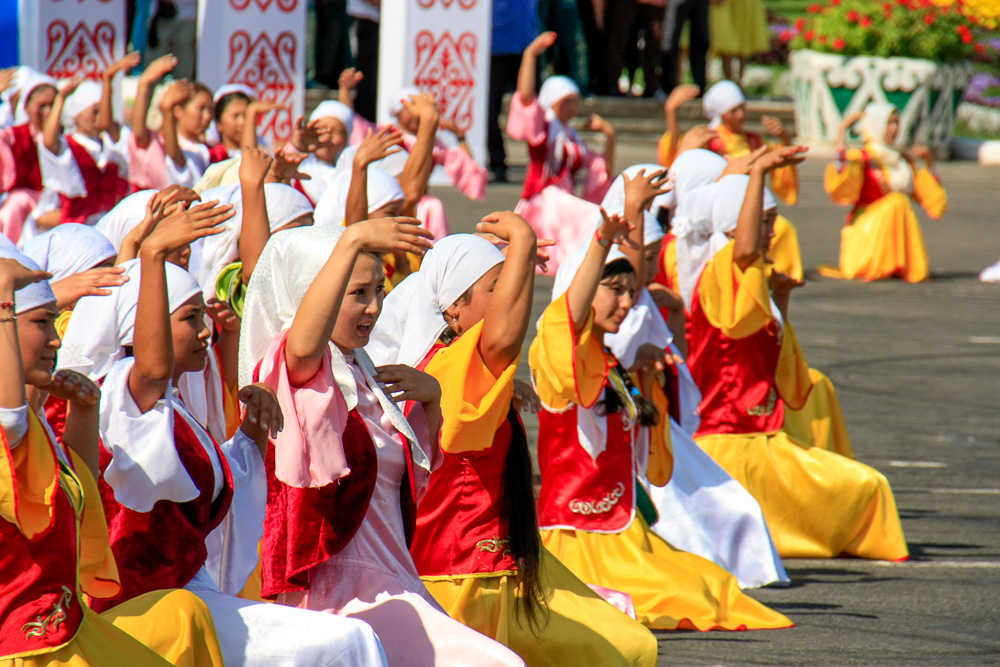 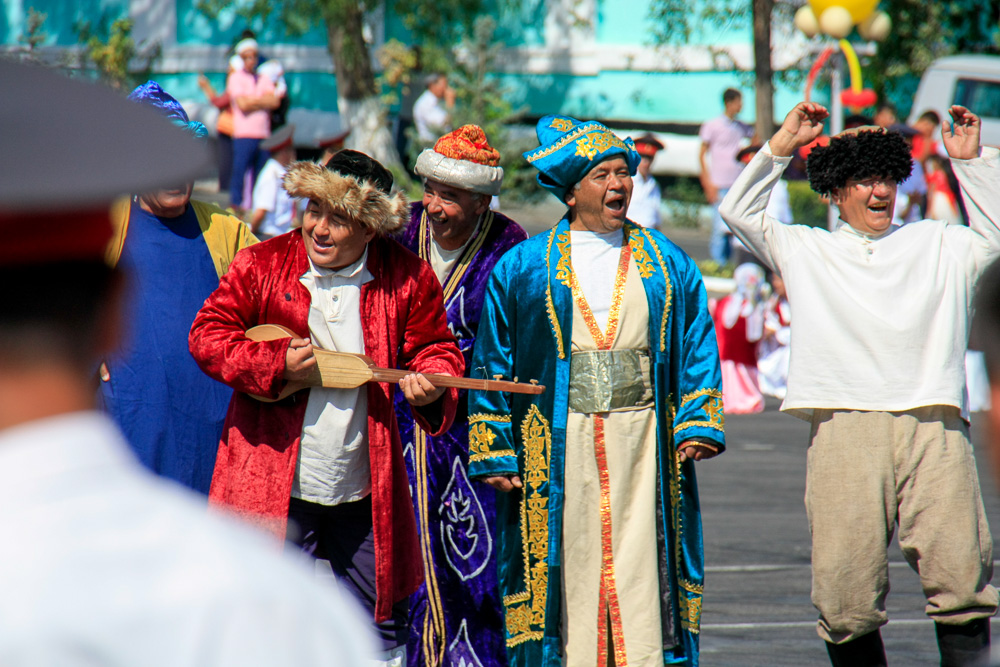 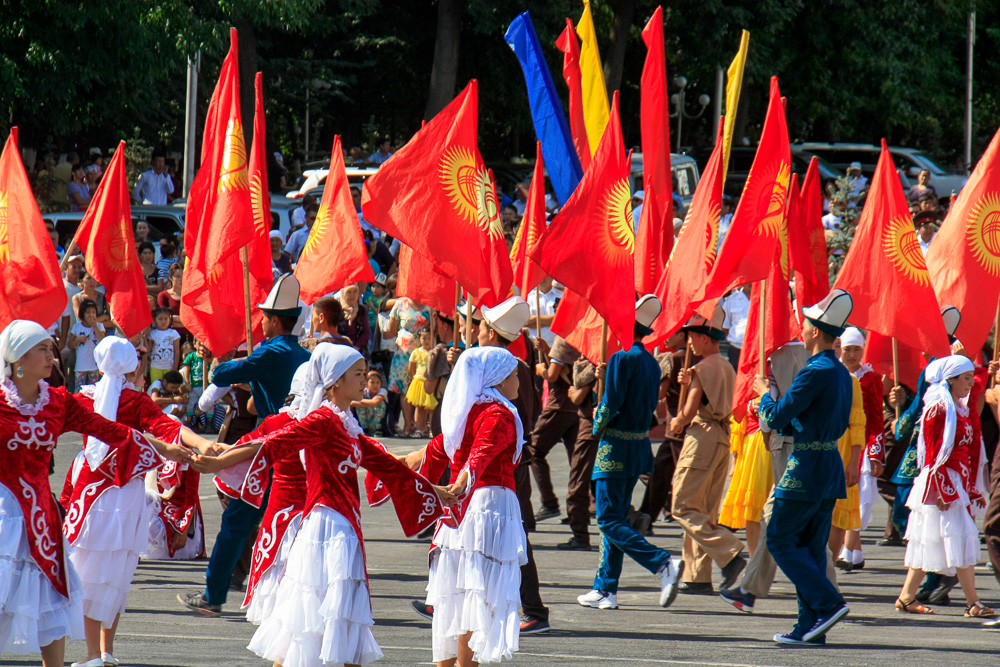 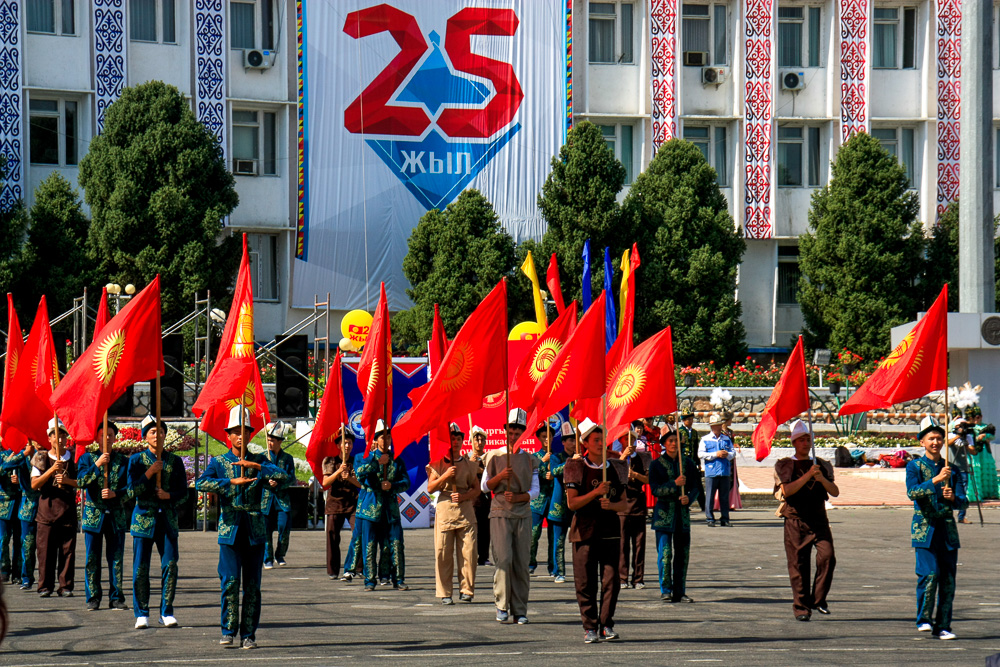 What I found out in the news later on was that while everything seemed alright in Osh, this year’s independence day turned out to be a bit of a rollercoaster. Between a tragic fire killing 14 Kyrgyz women working in Moscow, a car accident on the Bishkek-Osh road that killed nine, and a Uyghur-suspected bombing of the Chinese embassy in Bishkek that injured three, all within the span of a few days, the country was already in mourning. During the independence day events in Bishkek, rather than extolling the virtues of the country or standing in sympathy with victims of the recent events, current president Almazbek Atambayev went political, promoting some innocuous-sounding yet suspicious constitutional changes and excoriating the previous president Roza Otunbayeva, who was present at the ceremonies — she stormed off. Yikes. Kyrgyzstan is still the only Central Asian democracy out there and the least authoritarian. Let’s hope for 25 more years of that, whatever changes may be afoot.

Joining up with Annie from London for a few days, we headed four hours north to the end-of-the-road village of Arslanbob (Kyrgyz: Arstanbap), a primarily Uzbek area. People here are noticably different: more Eurasian and less Mongoloid, more religiously conservative including in their clothing, and the men wear some very different looking hats, more akin to the Uighur ones: green and round, but square on top. The scenery changes drastically, from a brown and dry flatland to brown and dry hills, then approaching the village, to a sudden verdant and green valley with an imposing mountain backdrop. 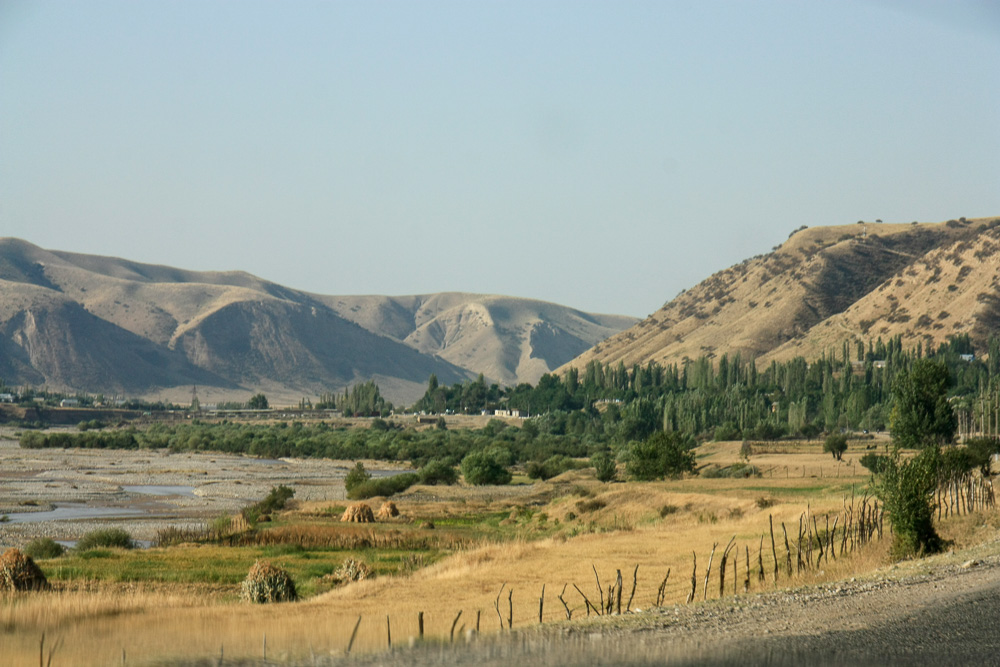 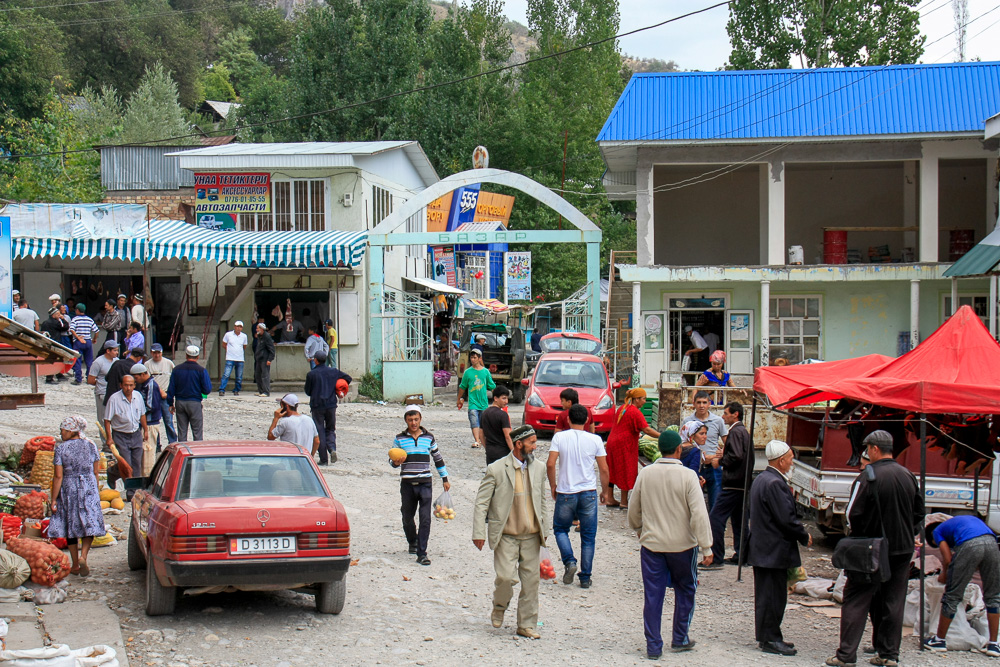 And this is something we were able to appreciate with virtually no effort at all, as our Uzbek homestay had a tapchan (sitting area, usually in the form of a large flat bed, with a low table for refreshments) in the form of a balcony overlooking the valley. Dinner, breakfast, dinner, breakfast…sunset, sunrise, sunset, sunrise. Wow. Our hosts, Bunyad and Nodira, heaped loads of grapes, watermelons, bread, tea, and kurdaak (mutton and potatoes) on us while we had a little English-Russian-Uzbek-Kyrgyz language exchange. 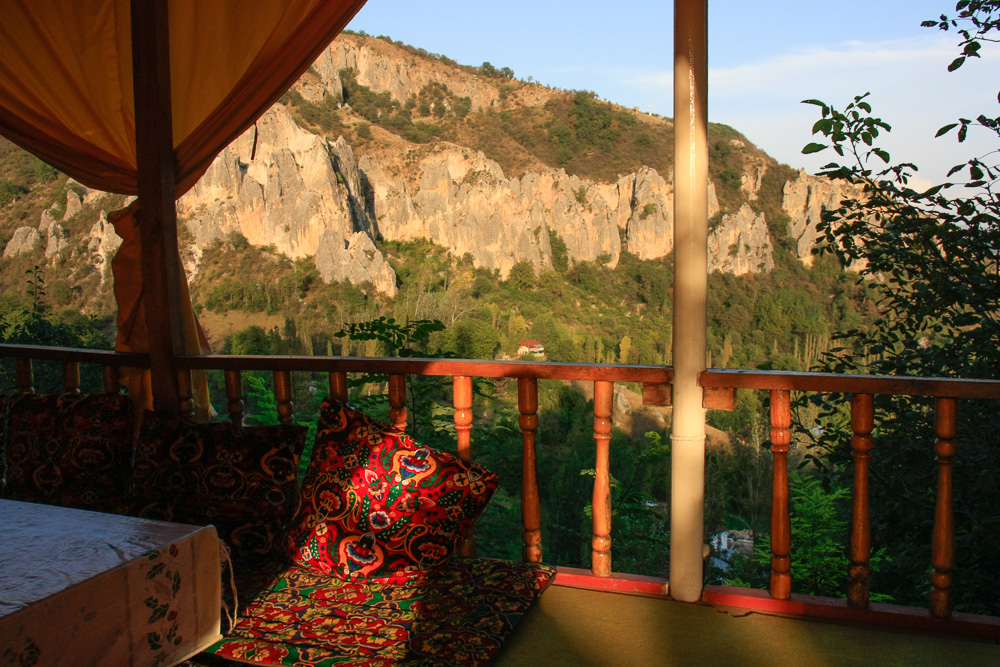 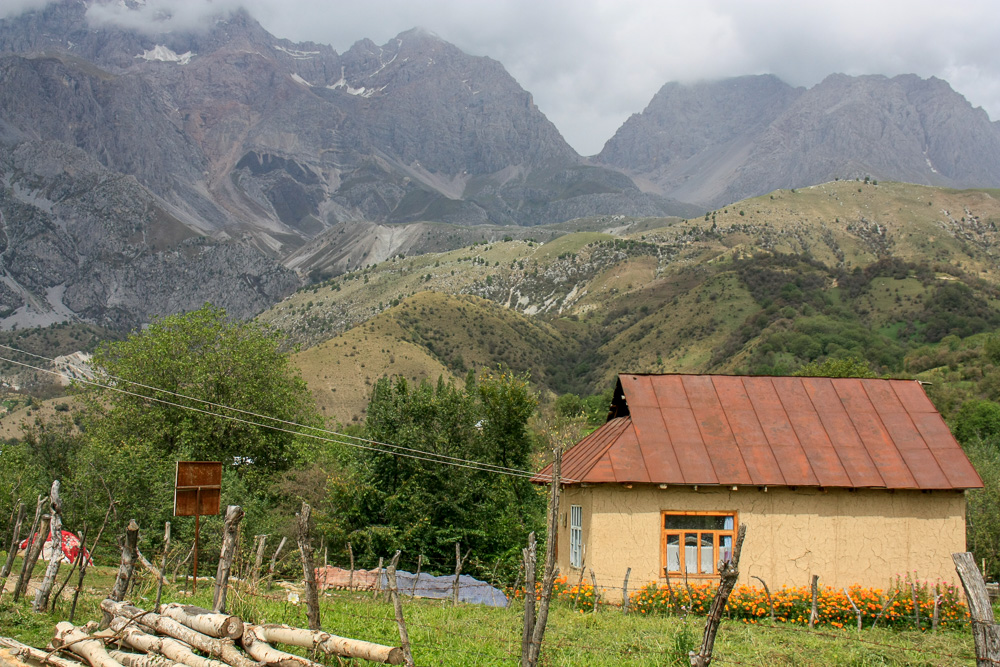 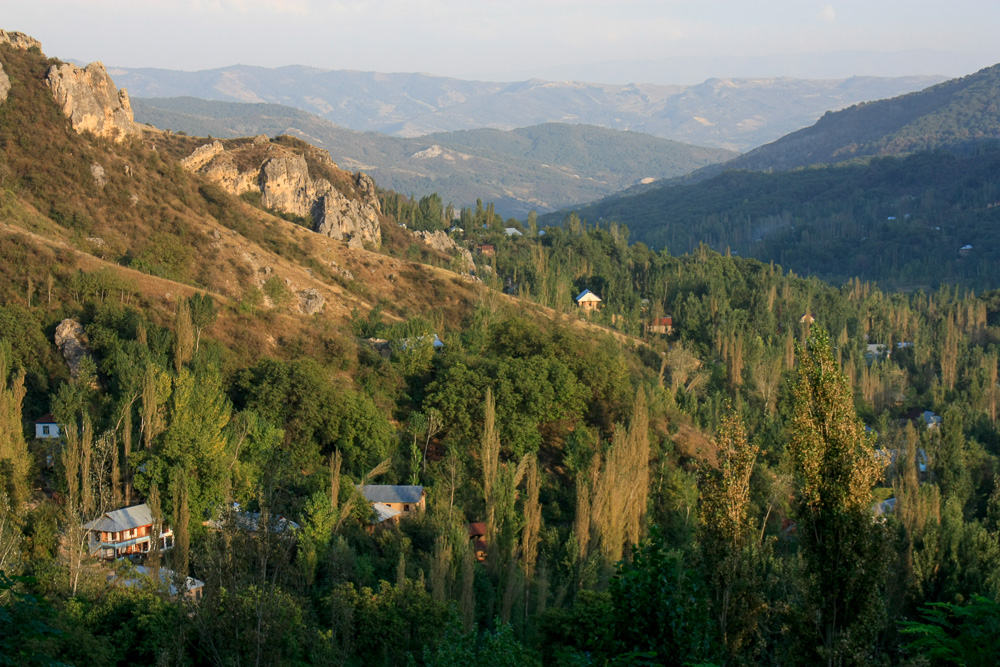 Unfortunately, one thing was missing on our table spread, and that’s cause we were a month too early: walnuts — or “orekh” as locally-referred. Home to the largest walnut grove in the world at 11,000 hectares, the harvest is in October. Bunyad, who formerly worked 10 years in Russia doing home construction and has now returned to Arslanbob to grow potatoes, harvests on average 100 kilograms of walnuts per year, which he sells in next-door Uzbekistan. Arslanbob’s walnuts usually head as far as Turkey and Russia.

And so Annie and I went on a little quest, taking in a hike that included a small waterfall used mostly as a local wedding backdrop, and a panorama view of the mountains and the valleys. 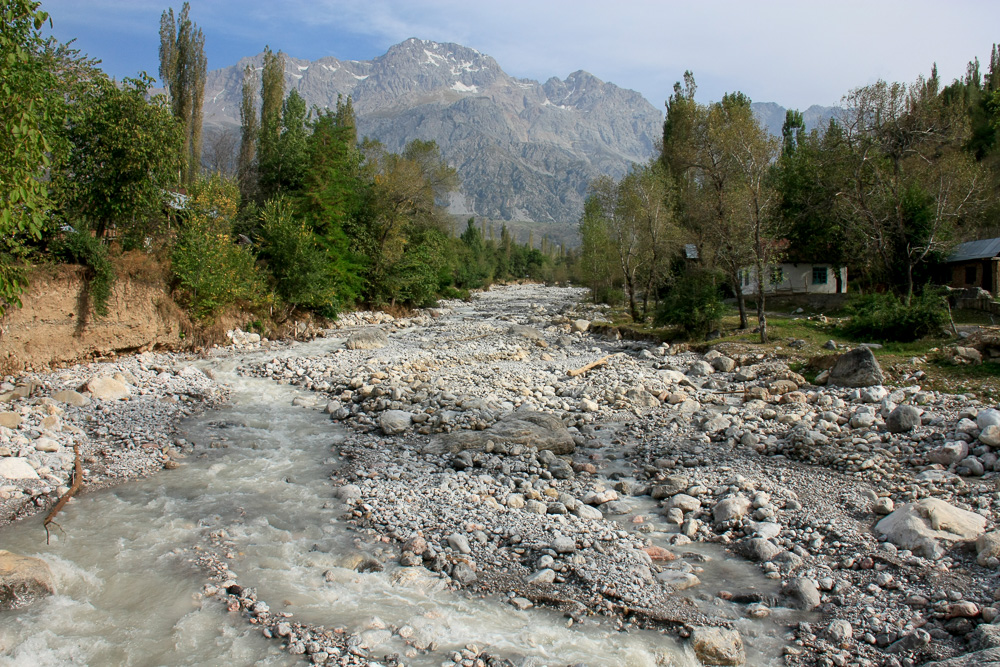 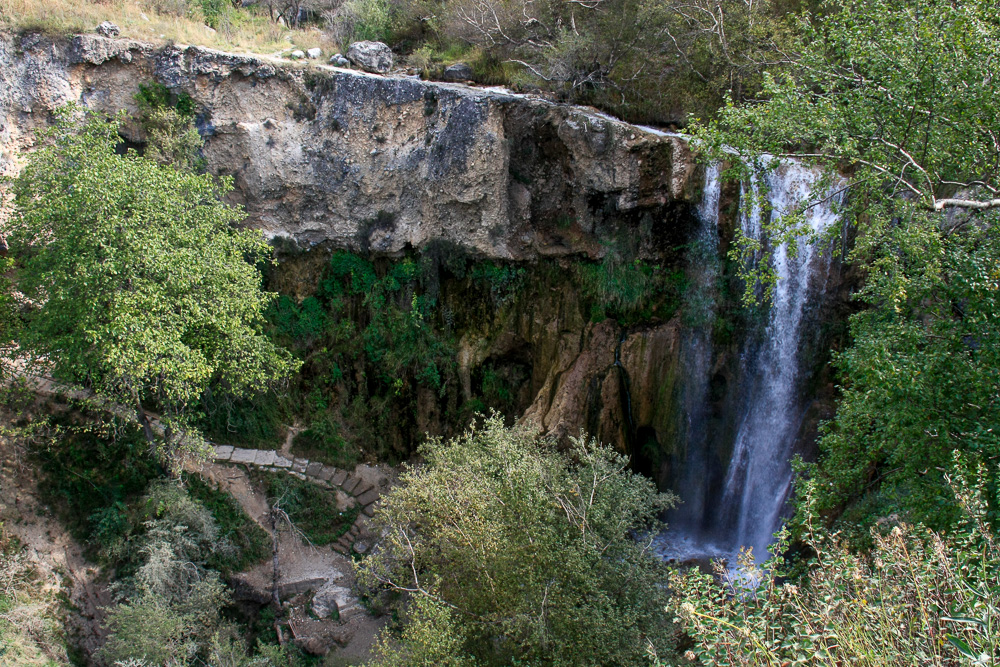 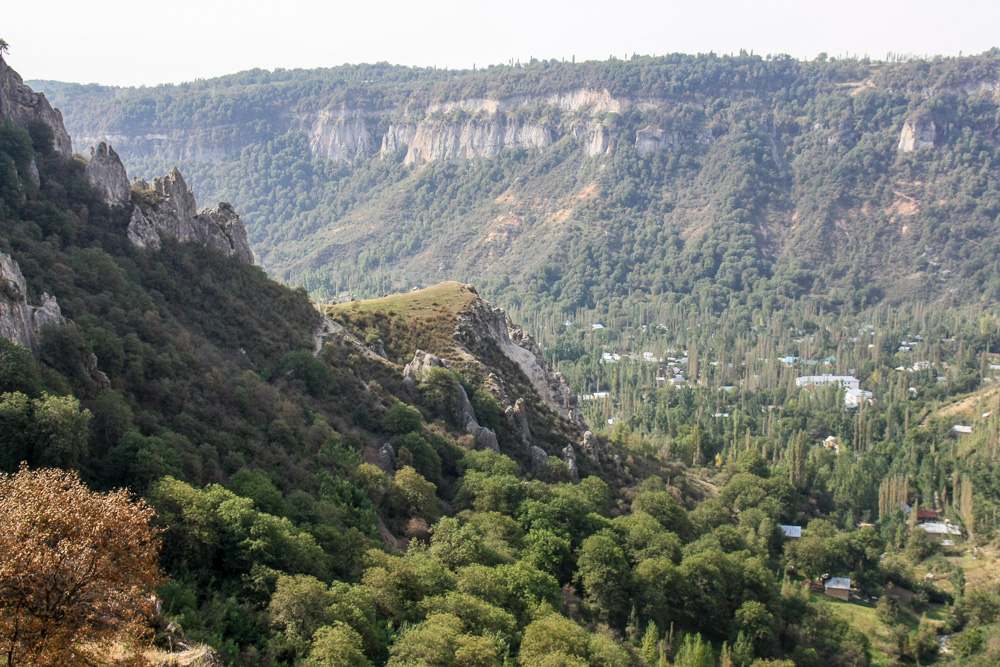 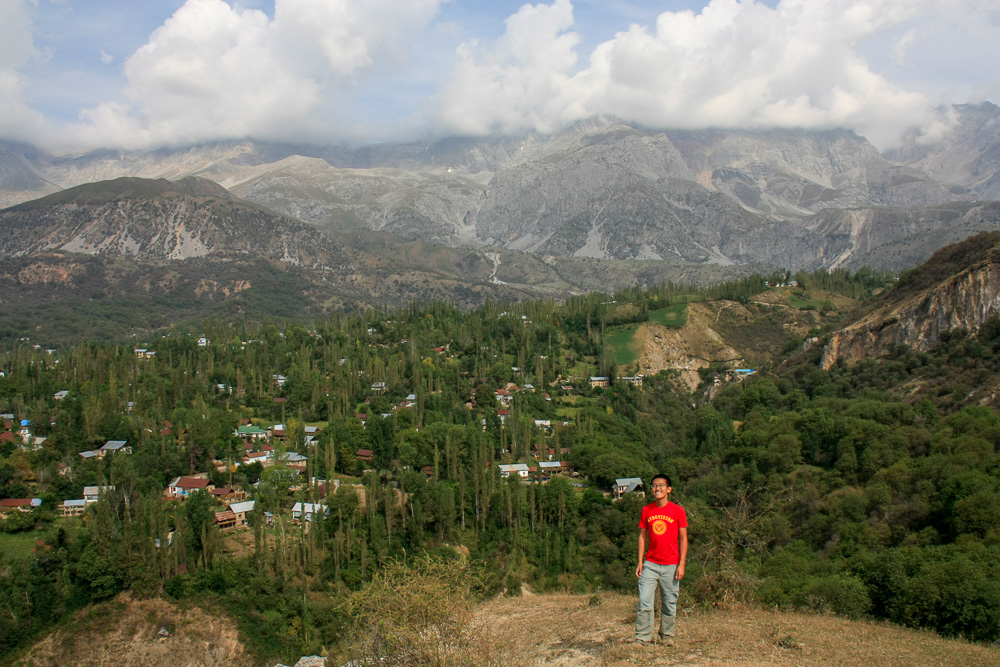 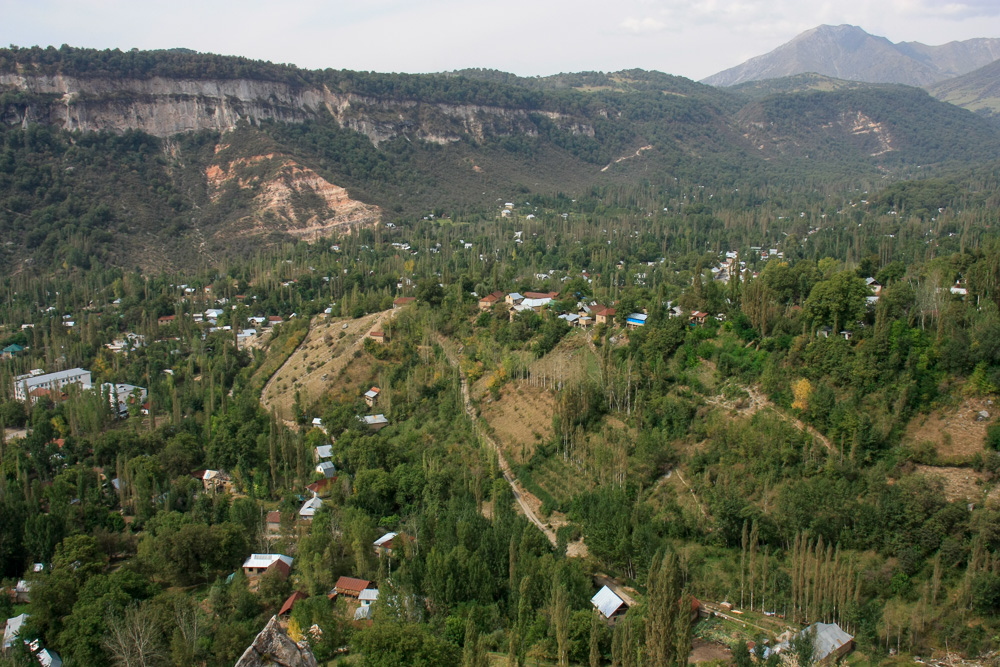 Just behind the mountain to which both of those belong is the walnut grove, an impossible shade of green, sprawling yet divided into neat plots of land with small dirt roads twisting in between. Despite signs of civilisation, it was hardly bustling: we encountered only a couple of people in the span of three hours, some of whom were harvesting rosehip. But for us, the priority: where are the walnuts? 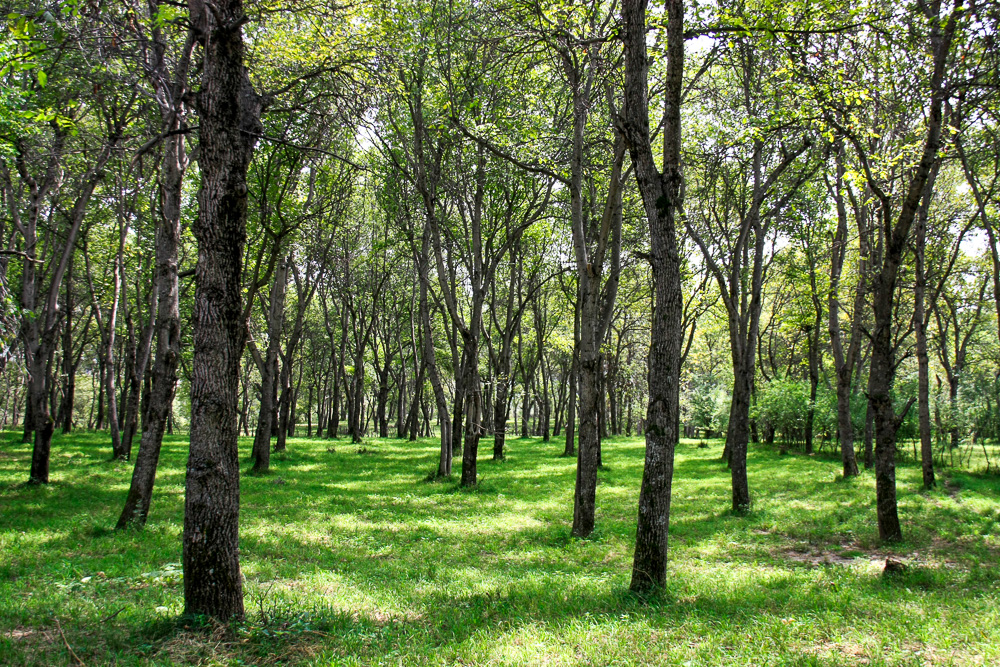 Well, first of all… I certainly didn’t know what a walnut looked like! Until Arslanbob, I didn’t even know they grew on trees! We walked for maybe a kilometre through the forest before we realised that it was in front of us all along: above us in the trees, below us on what we were walking on. Little green fruits growing in small clusters on trees, easily confused for a small apple from far away. And on the ground, the evidence: fallen fruits, green skins broken to reveal a hard brown shell inside. Crushing the shells with our foot revealed the reward: sadly, a little too unripe for us to indulge. 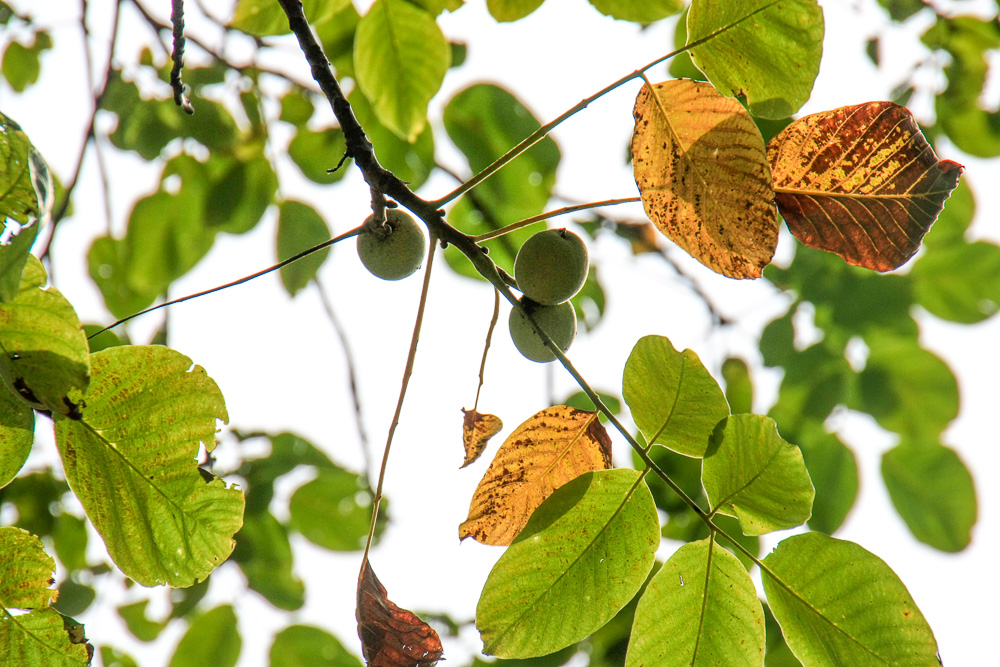 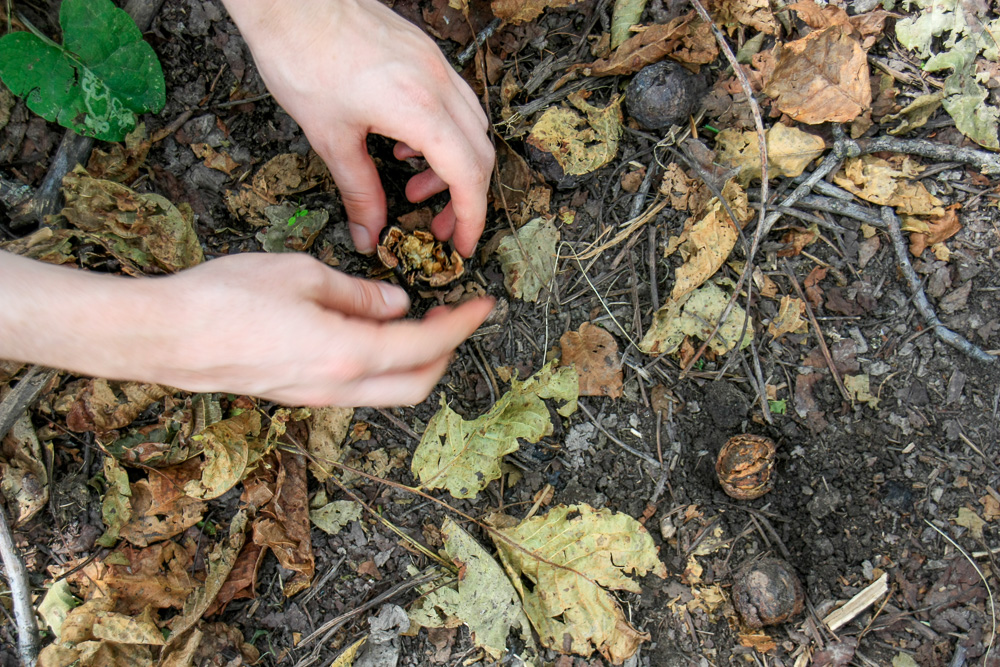 We did find one single adequate walnut… 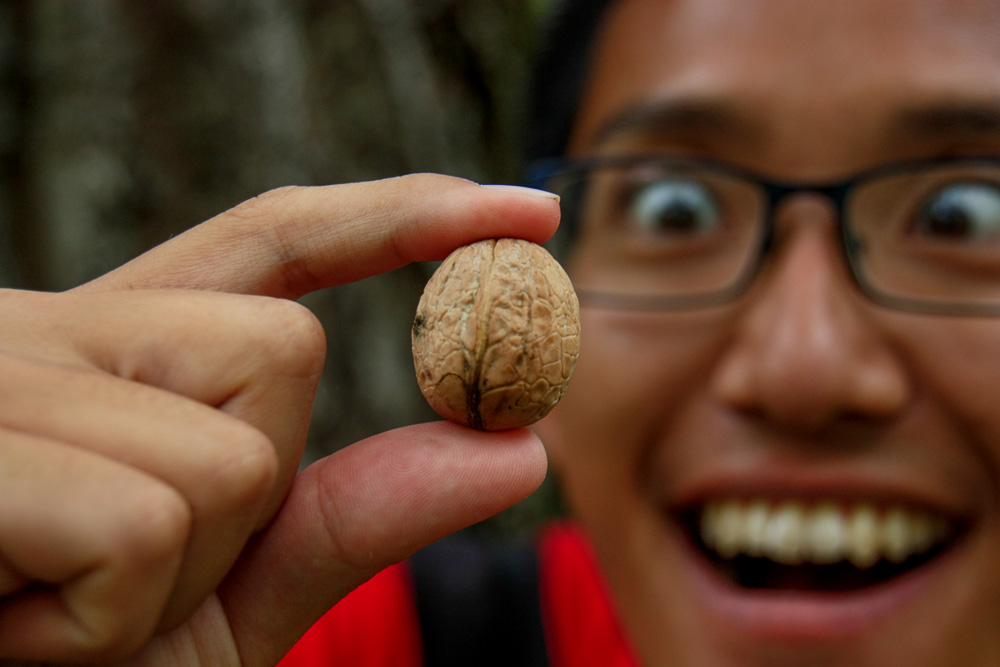 …which we shared between the two of us. Despite its slightly unripe bitterness, we were both taken aback by how creamy a fresh walnut could taste.

Bunyad, appreciative of our efforts to teach him a bit of English, invited us both for a free stay in a future October harvest. I may have to take him up on that offer.