In a country whose flag features the top of a yurt and whose (non-Lenin) statues all seem to feature people on horses, what better represents the country to visitors than a horse trek with yurt stays?

Joining up temporarily in Kochkor with travellers Jack, Jessica, Charlotte, and Matt, we arranged a three-day trip up to Song-Kul and back. After a two-hour car journey to the middle of nowhere, we met up with our guide, Marat, who set us up with five of his 15 horses. 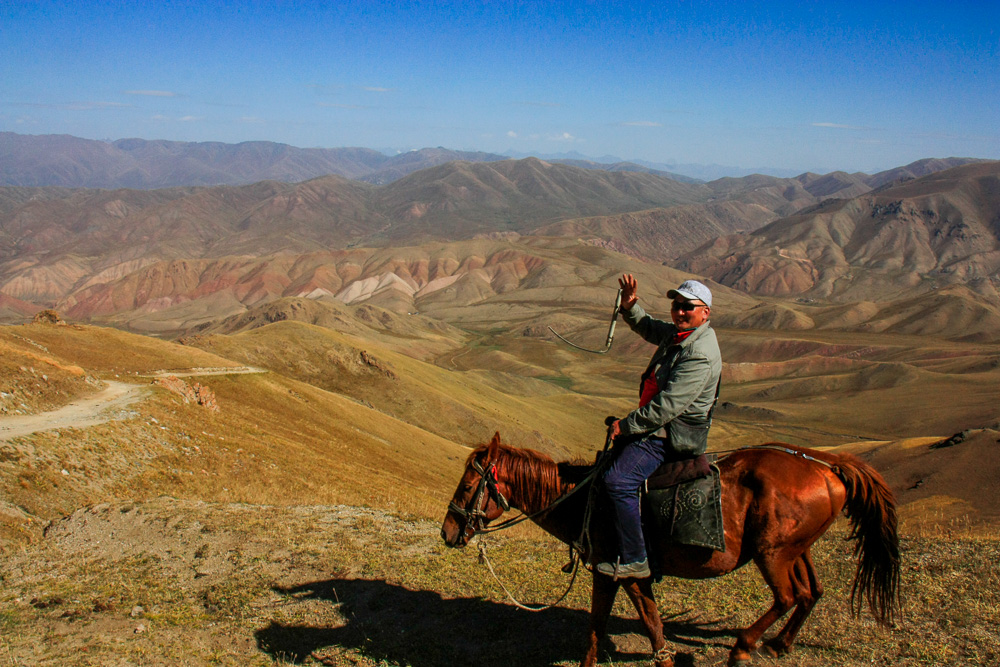 My horse, Gerkashka, happened to be the runt of the pack, but seemed by far the most obedient, trotting on command from the first minute. In contrast to my last horse trek in Lesotho, I felt a little more in control and slightly less in pain this time — though that really could be just Gerkashka!

Over the next three days, we went up some incredibly steep slopes and — terrifyingly — down even steeper ones, seeing beautiful sparse jailoos from high vantage points. We rode next to and across rivers, parting groups of grazing sheep, horses, or cows along the way. And as we finally got more comfortable with our horses, as soon as we hit flat meadowlands, we beckoned our horses to gallop. It’s exhilarating, like flying… as long as you tune out our hilariously constant cries of “chu! chua! ya!” and even a few “yeehaws” as we pleaded with our horses to go faster and faster and to keep going — often to no avail. But when we got one of them galloping, the rest would follow, and it’s an indescribably awesome feeling to have six horses running full speed alongside each other, endless fields zooming by our peripheral vision. 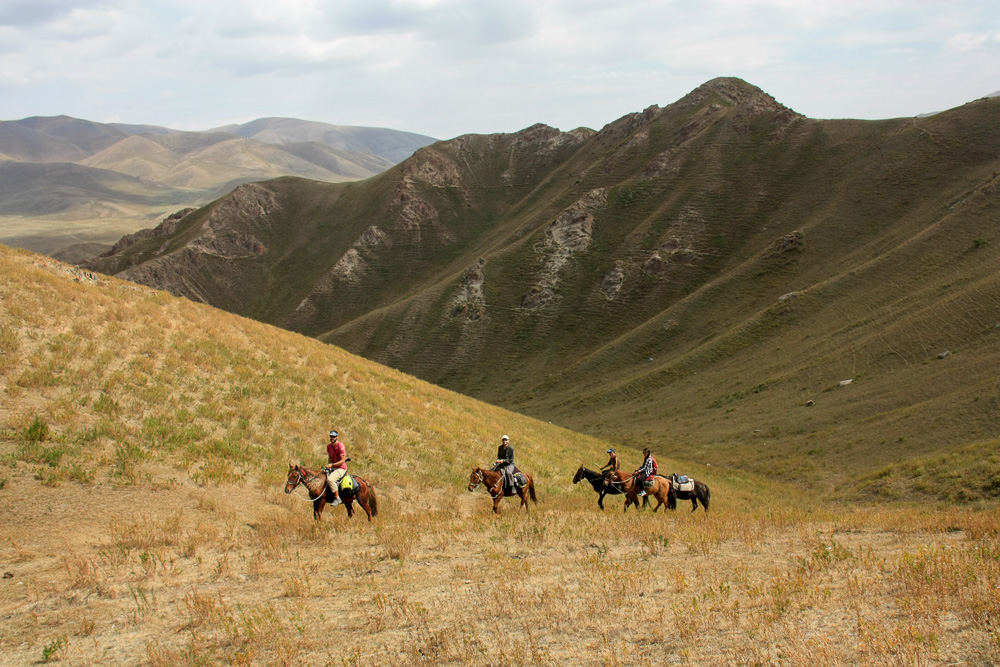 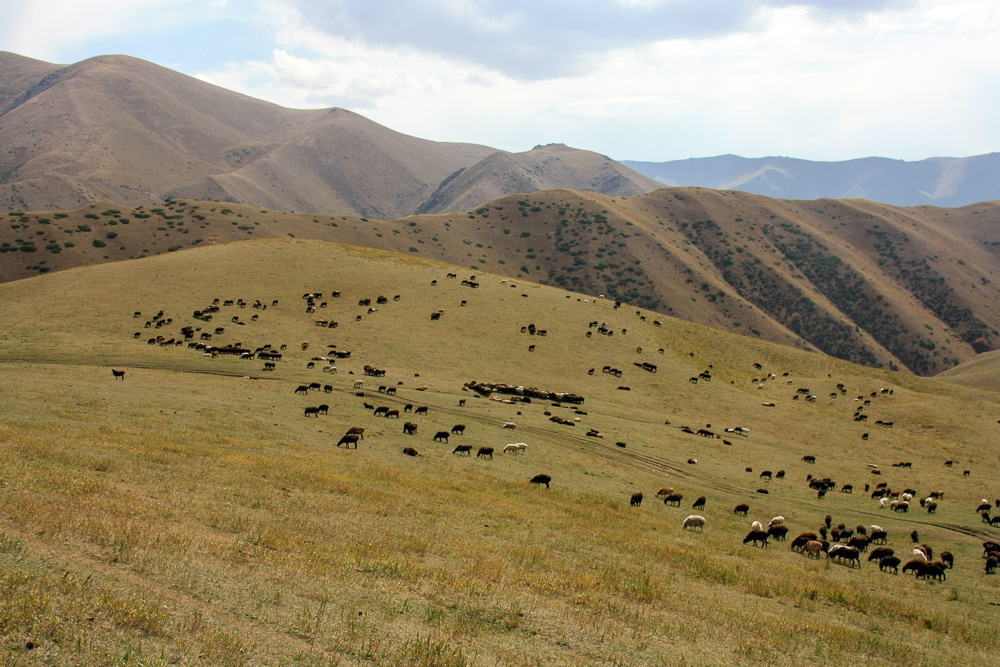 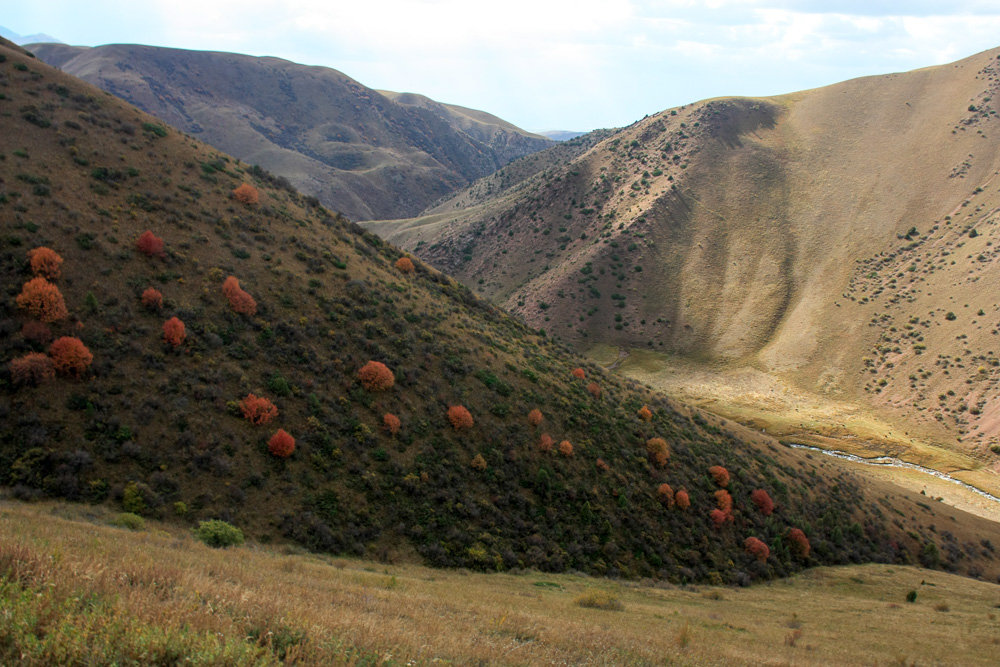 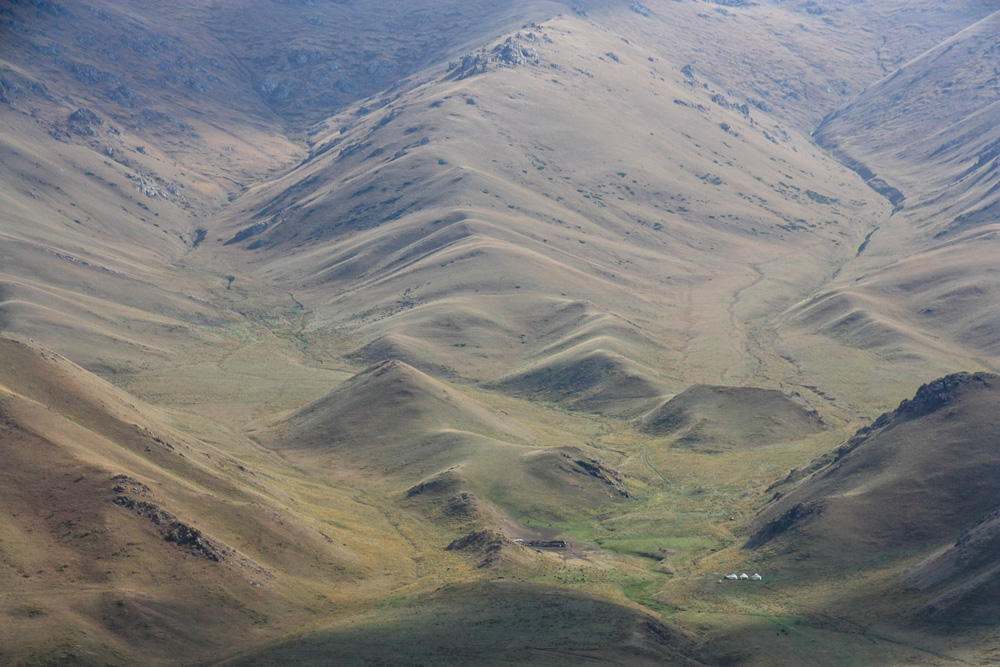 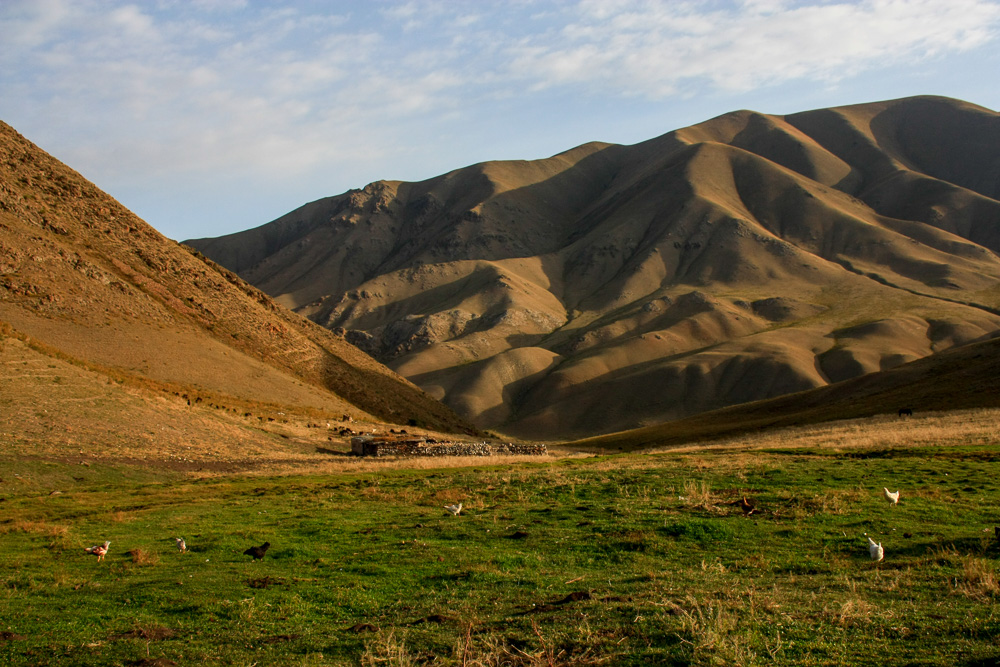 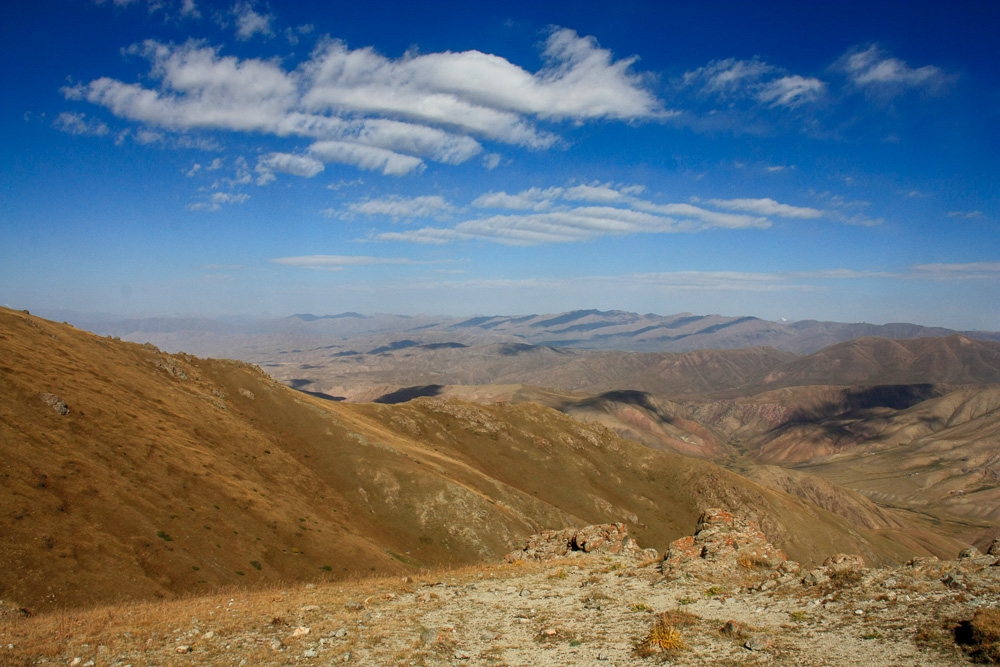 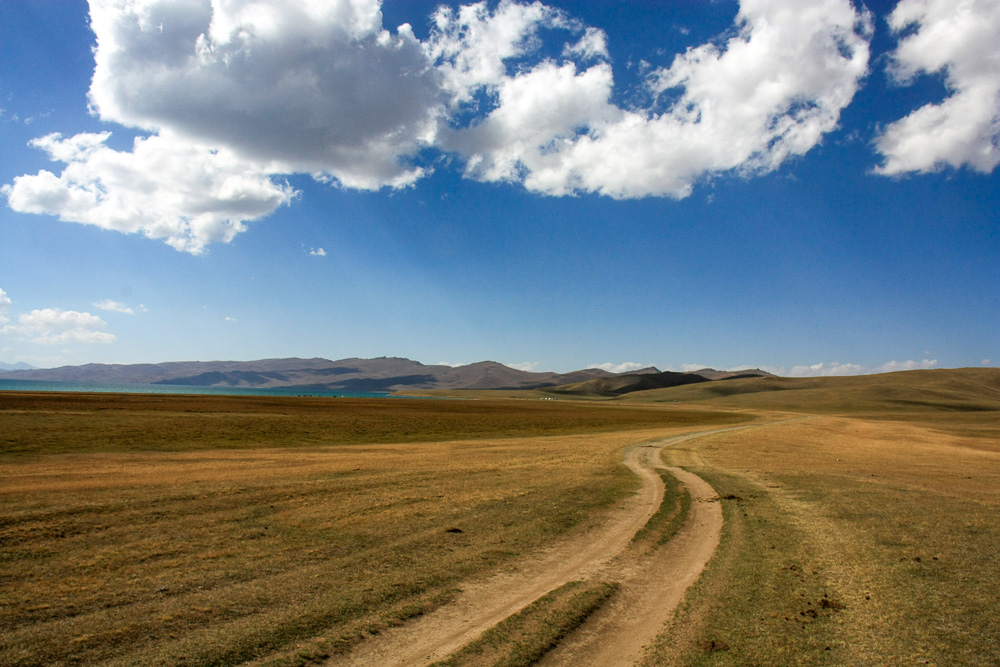 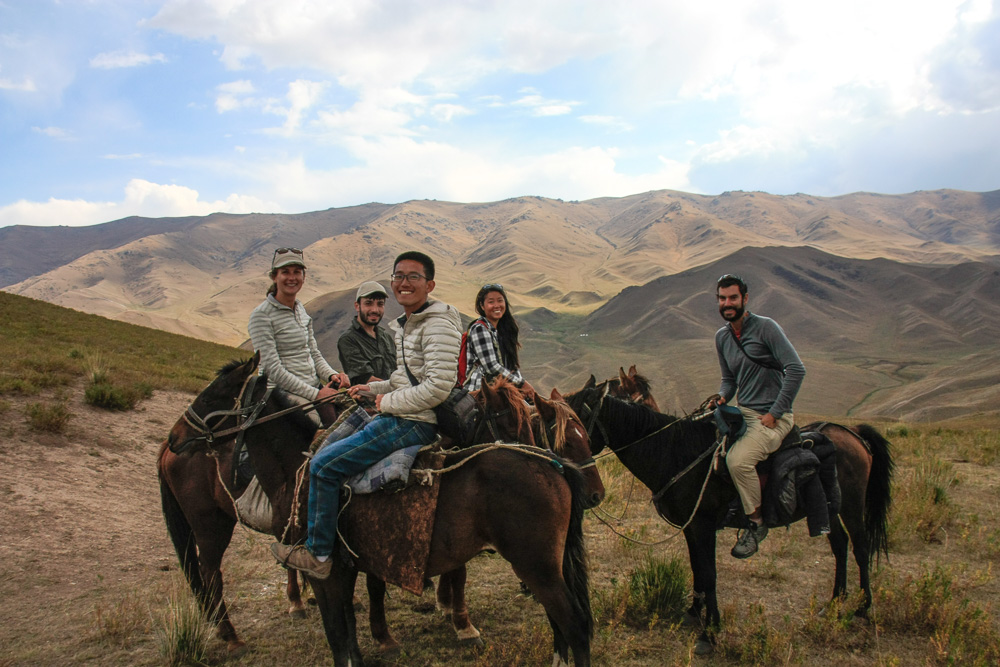 We had meals and spent nights in yurt camps along the way, dropping in with completely nonchalant families happy to host, but with plenty of other things to do — like herd their livestock. And as easy as this sudden hospitality came to them, they did it incredibly well — plenty of blankets and even in-yurt heating for the freezing nights, and absolutely amazing food consisting of rich stews, homemade jams, and even fresh bread, thanks to the simple dung fire stove/oven. 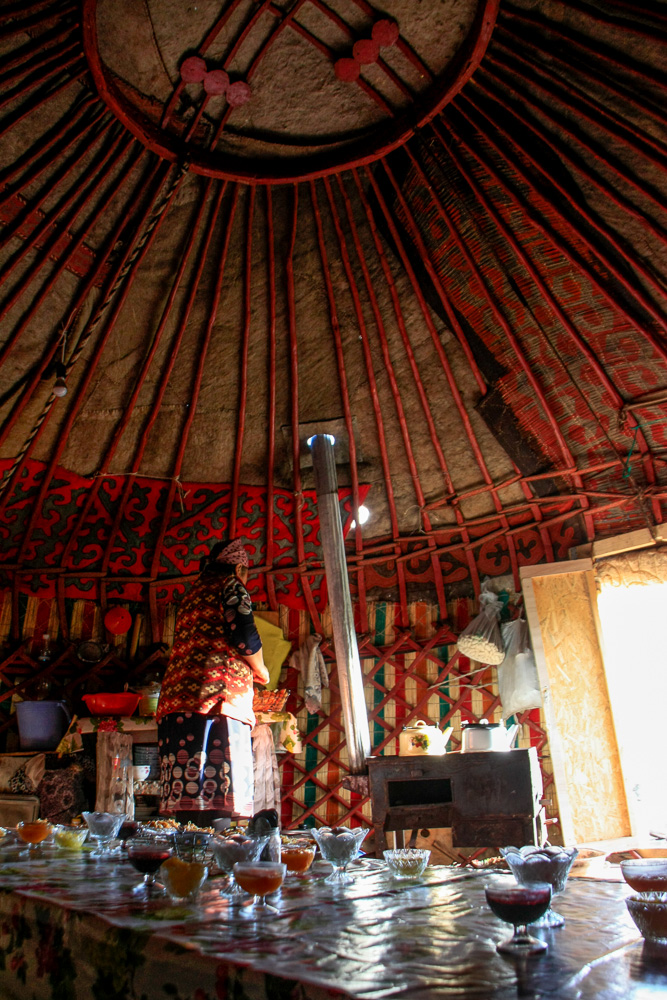 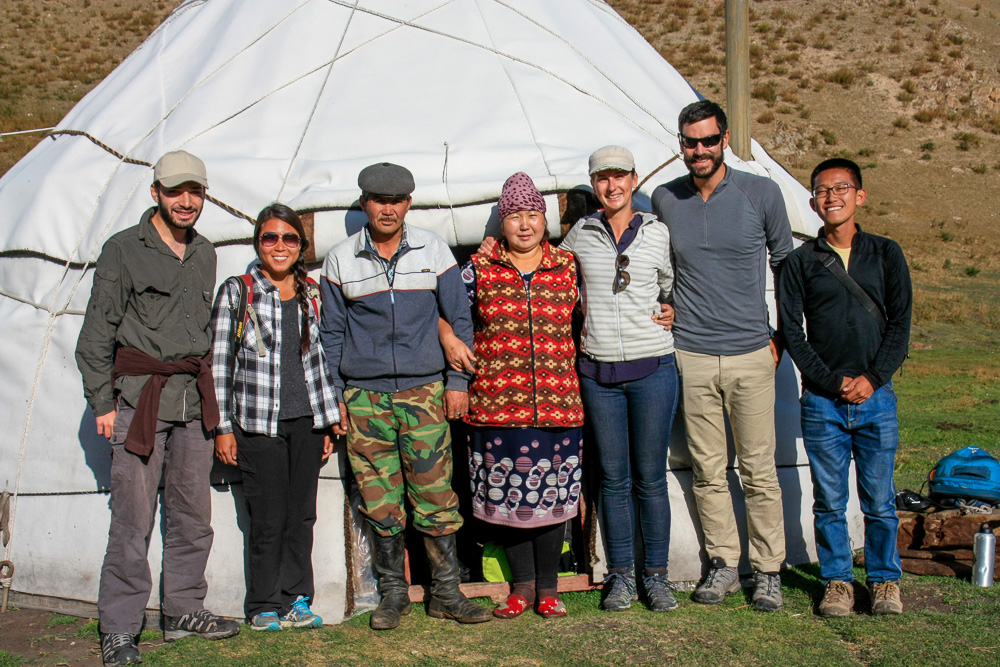 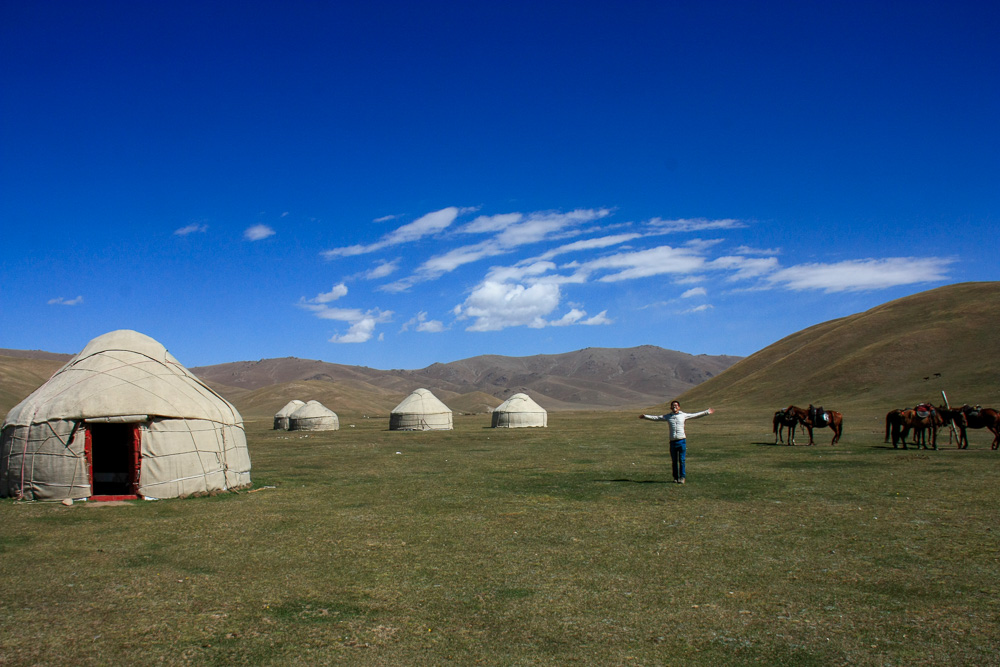 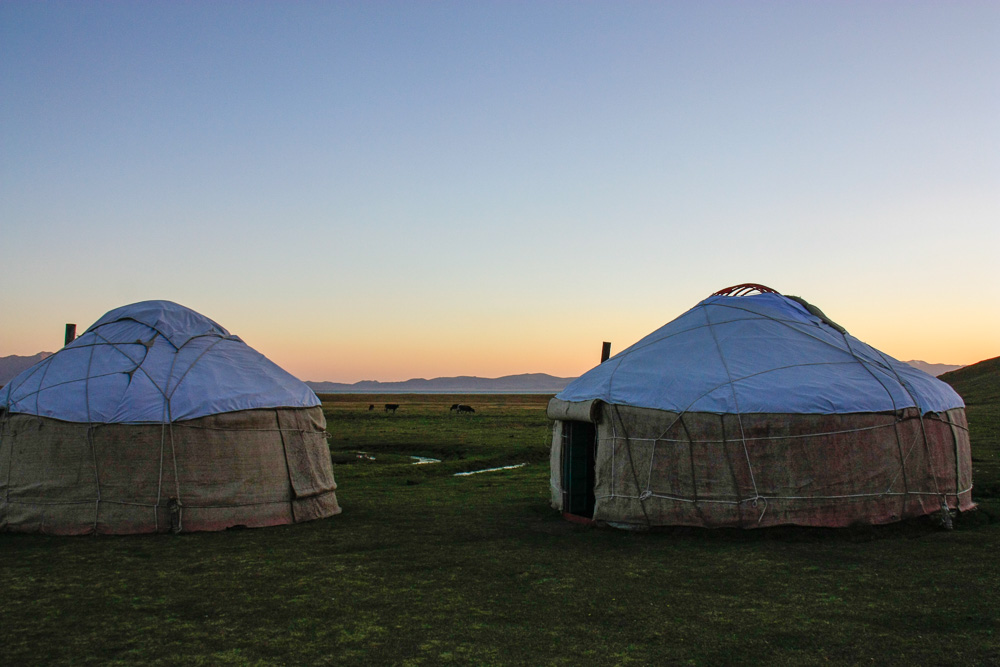 The families were always friendly, even if we couldn’t communicate: some of them only speak Kyrgyz and not Russian, which I’m barely able to use anyway. But we got a tiny taste of their summer life in the jailoos, mere weeks before they pack up and move back to the villages for the winter. And I gotta say, as incredibly peaceful as it is… I think it’d be kind of boring! Neighbours are often long horseback journeys away, and with limited solar-powered electricity, entertainment is just with your own family. And when out in the field watching over the animals, there’s no one else to talk to! But seeing our hosts in idle moments — children, playing with random objects as toys and having fun with the guests who stop by; teenagers, wrestling each other for kicks; adults, playing with their pet puppies and literally throwing their pet kittens onto their yurts — I guess they find a way! 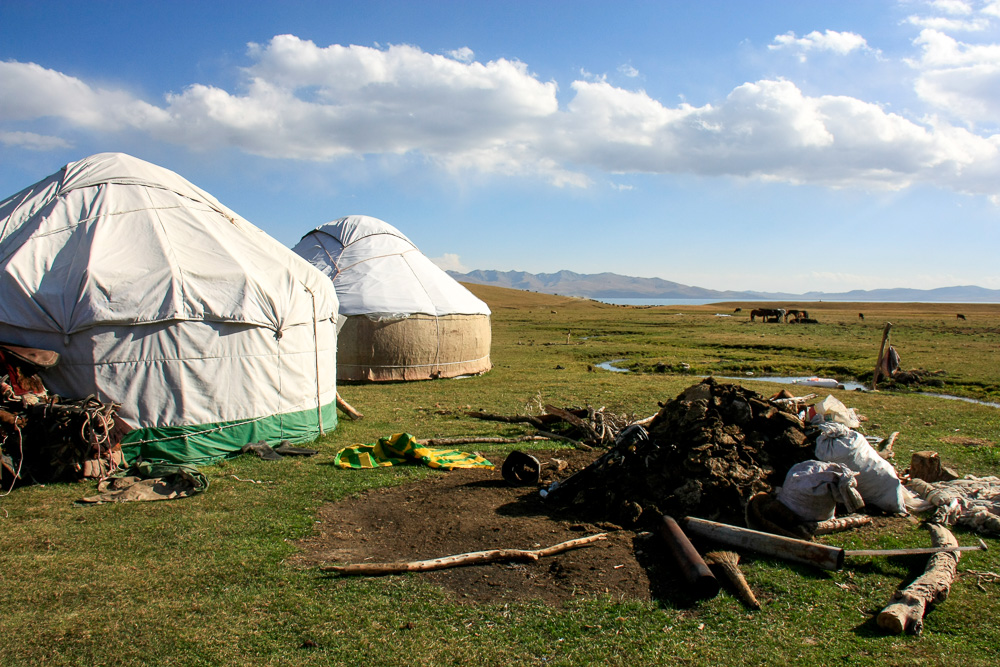 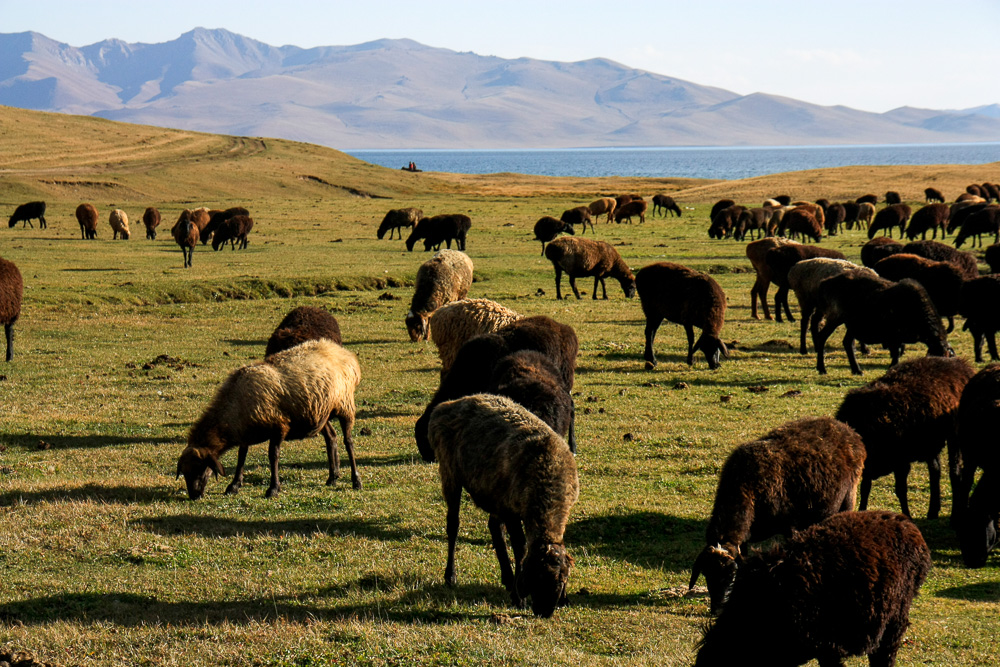 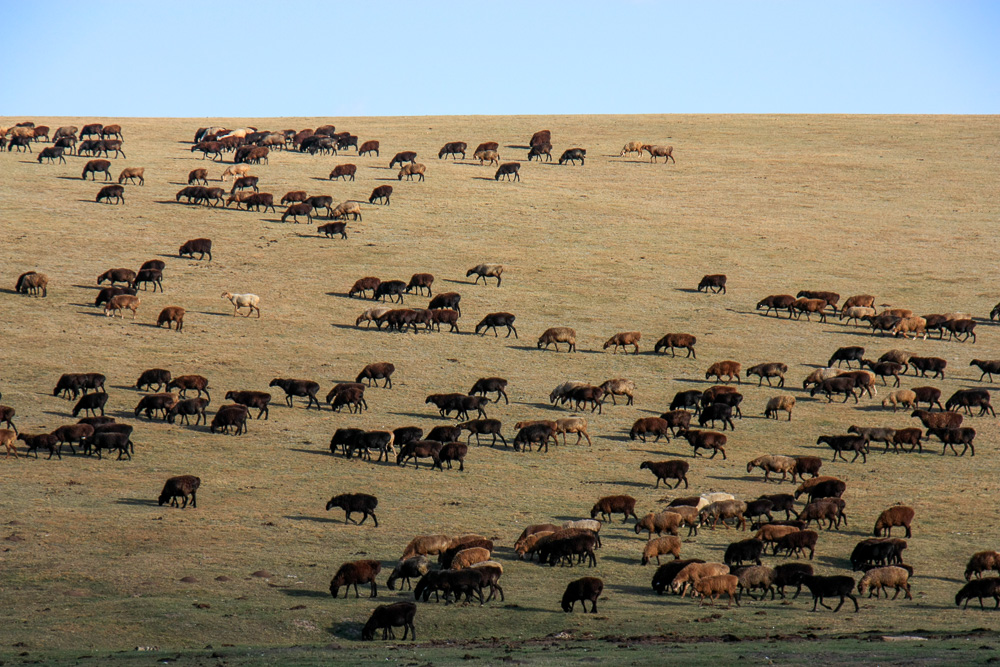 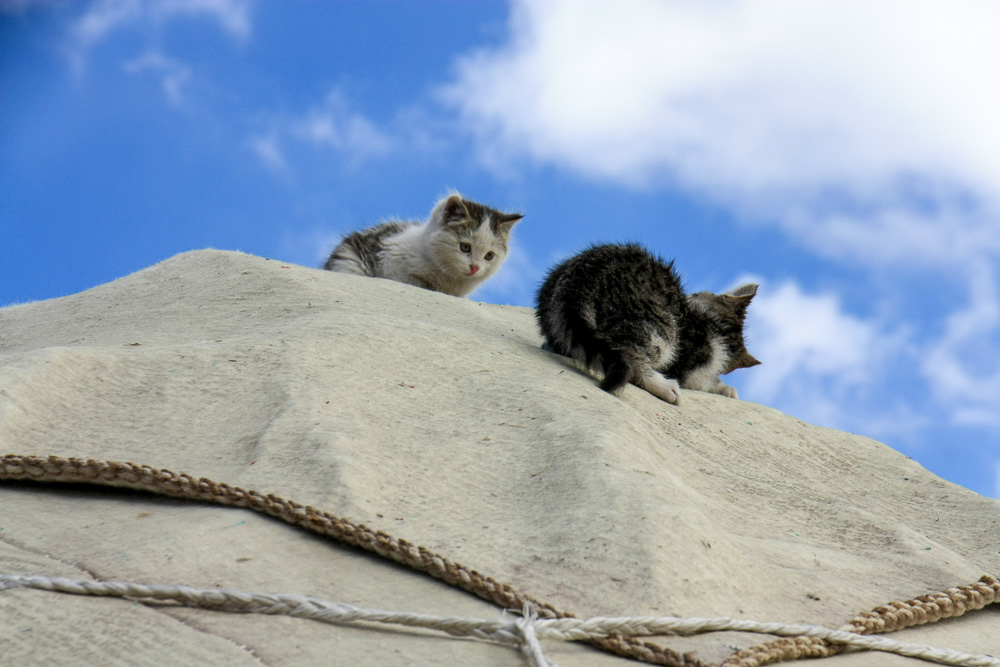 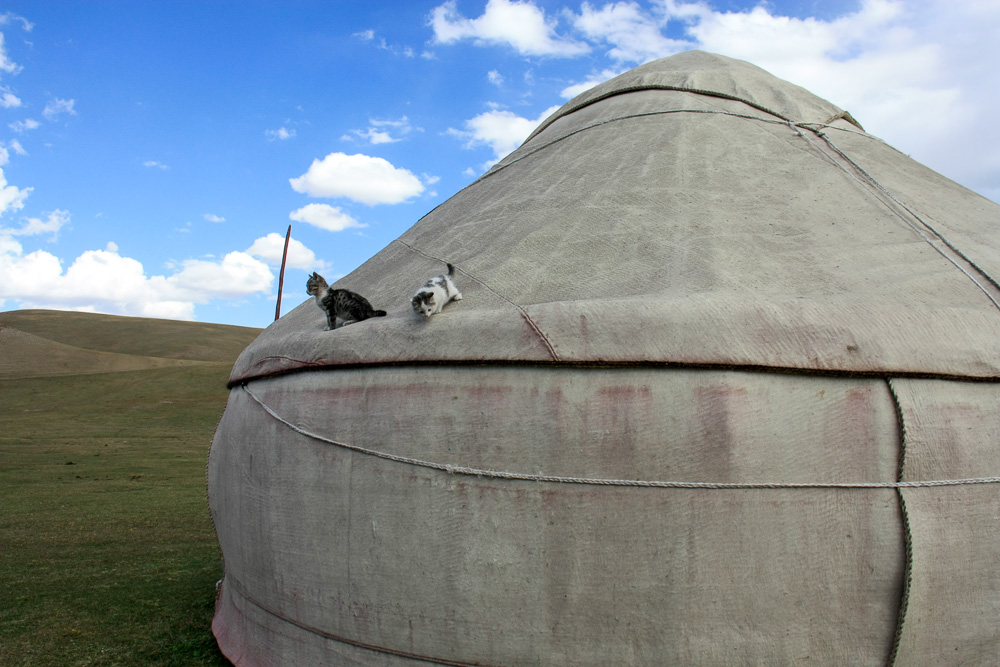 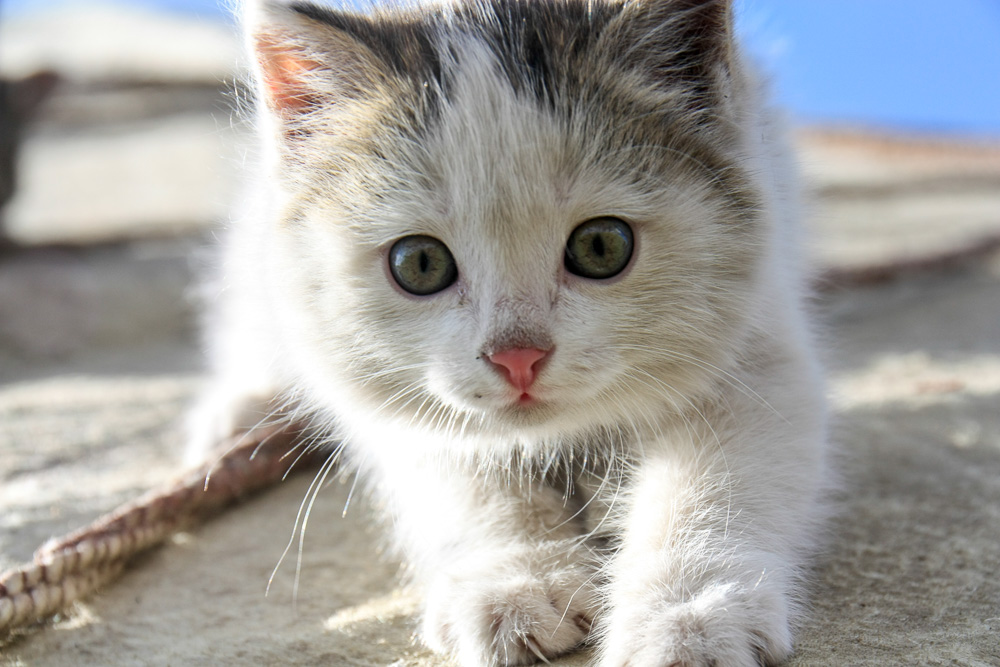 The lake itself is beautiful. Yurts dot the shore into the distance, horses race on the horizon, the surrounding golden hills contrasting with the glistening blue water. Scenery like this, I’ve only seen portrayed in children’s art and imagination… It’s amazing that it’s real! The only noise is that of waves and the occasional animal. We slept 12 hours each night — easy without electricity — waking up past when rays of light began leaking into our yurt, past when our host families would wake up and begin the daily routine of bringing out the animals, preparing food, getting water from the rivers, and cleaning around. Marat proudly told us that he spent his youth here, herding sheep in the area. 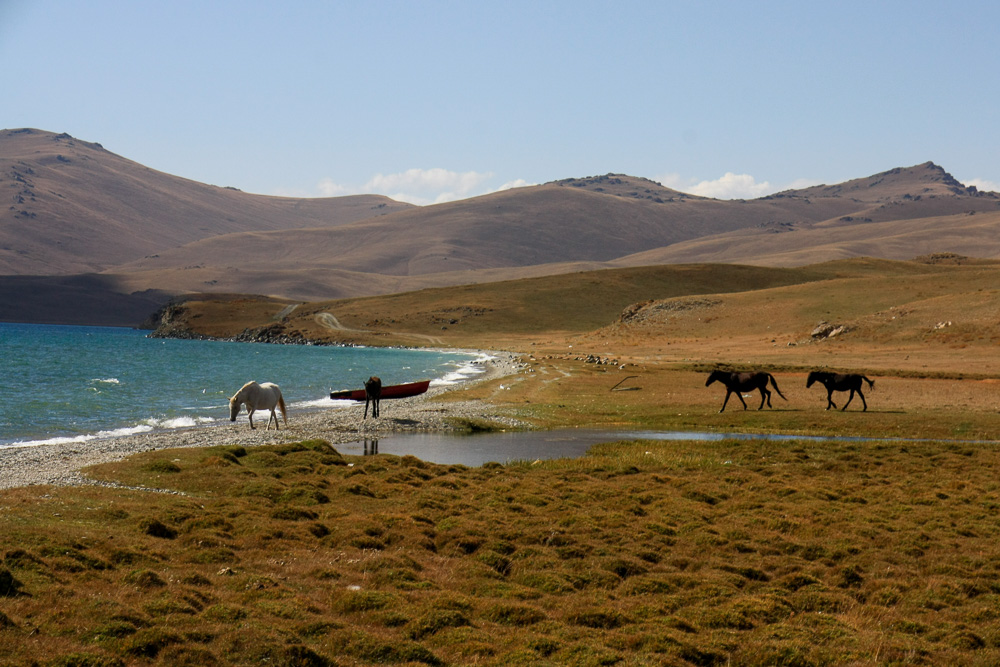 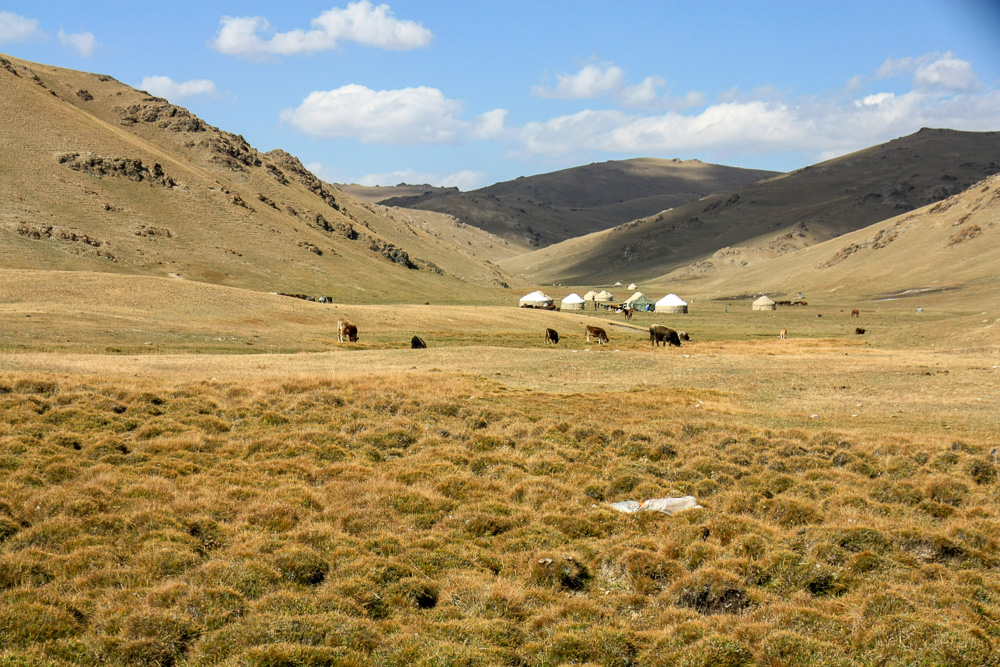 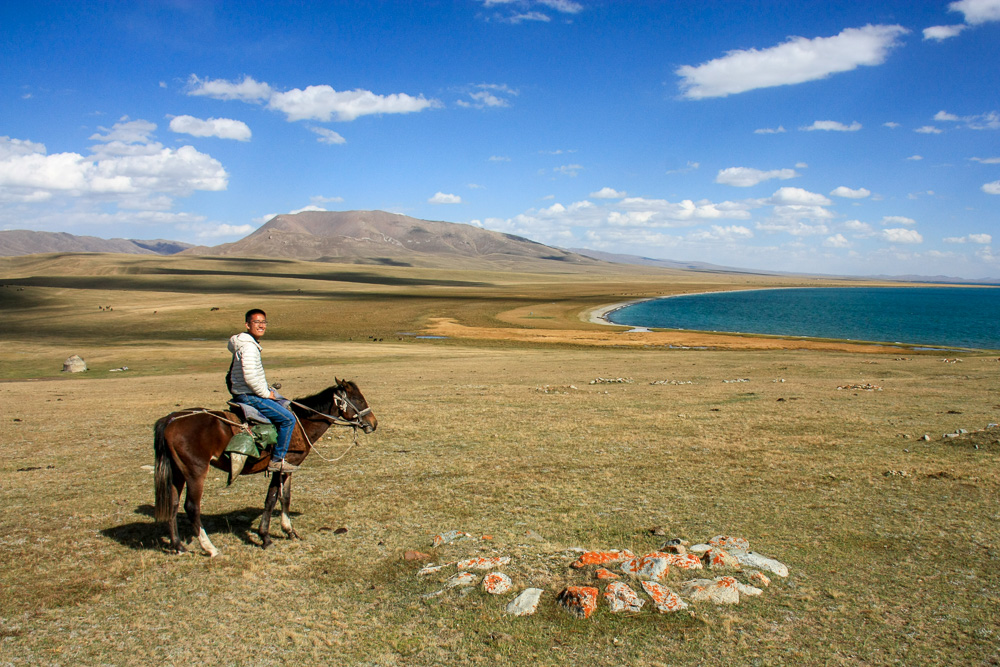 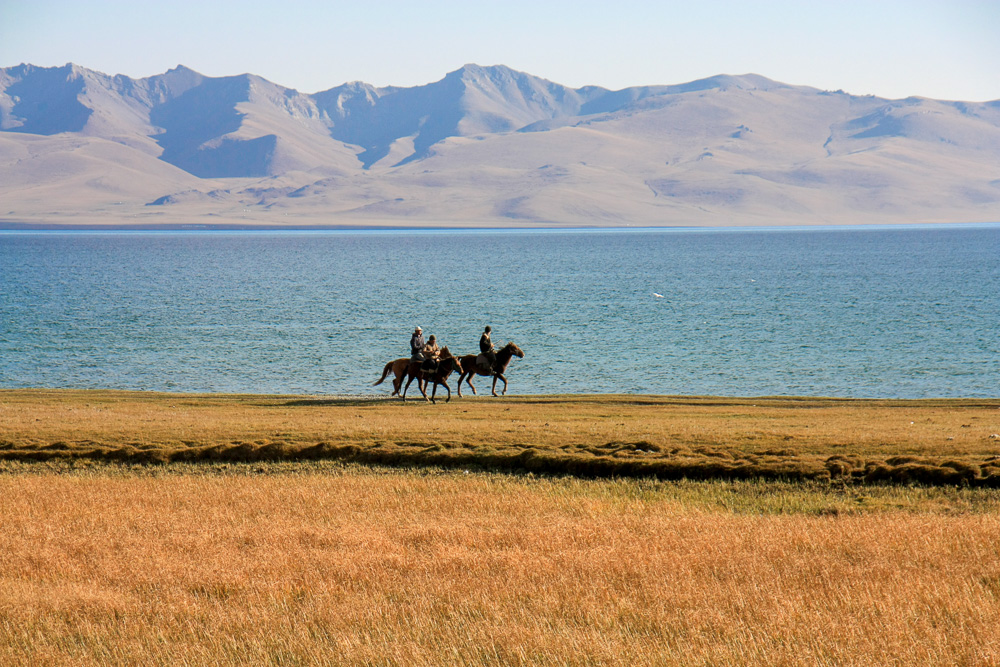 On our final day, after a long and grueling journey (I’m sure even moreso for the horses) back to Marat’s roadside yurt, his wife treated us to a grand lunch, bidding us goodbye. It won’t be long until they say goodbye to the jailoo for the season, too.