What a weird name.  I’ve made far too many terrible jokes, before even getting here, of “Nosotros vamos a Baños!  Ah mira, baños!  Ya estamos aqui!”

“Baños” means baths.  It also means washrooms.  But this town, Baños de Agua Santa, is so named because of the thermals (hot springs) in the area…I think.  Seeing signs saying “Baños” everywhere in town is certainly confusing when you’re actually looking for a washroom.

“Extreme” sports are the town’s calling – it’s quite cheap.  But with only a day here, we figured that we would settle for a tour of the surroundings – a valley full of waterfalls.  Imagine our surprise when we found out that a three hour tour costs only $4. 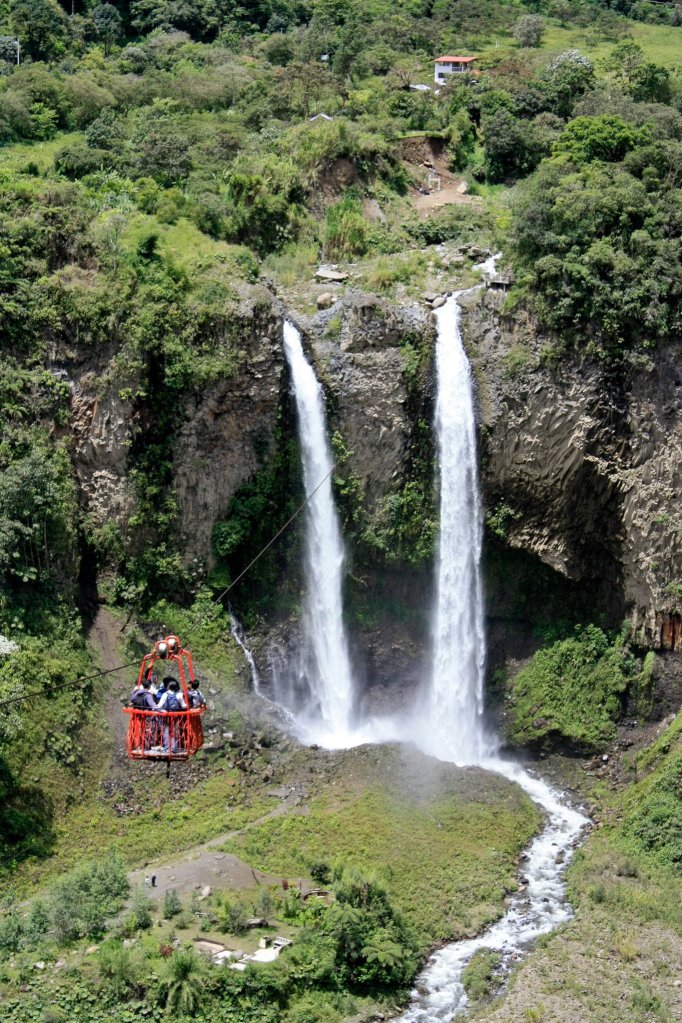 Well, sure, there were a billion Ecuadorian tourists with us, and we were in a garishly painted tourist truck without doors.  But that tour was pretty worth it – some impressive waterfalls, yes, but the highlight was zooming across a valley on a tarabita – basically like a zipline (plus a motor to handle the inclined portion at the end), but with a big basket that holds 10 people.  Certainly wouldn’t pass any safety tests in Canada.  It cost another $1.50…worth it alone, but I’d pay again and again to see the hilarious expression of fear that Silvia had on her face.

After the tour, there was one “extreme” (I hate that word, but what else to use?) thing I had on my mind to do – puenting.  (“Puente” is the Spanish word for bridge.)  I’ve seen this on the Latin American version of the Amazing Race, and on my favourite travel show Departures – basically, people hook cables to a bridge and jump off of it.

It only cost $20 to jump 100 metres!  Silvia and Óscar opted out, but came along anyway.  As for me…it felt a little bit surreal, standing in the middle of a trafficked bridge and having a harness strapped on.  And a little bit sketchy too – that cable was just tied a couple times to a barrier on the opposite side of bridge from where I was standing.  (The cable thus runs under the bridge.)  In puenting, the harness is on your body, and you aren’t tied on your ankles.  Before I knew it, I was clipped in, told to climb OVER the barriers of the bridge onto this tiny little platform…1, 2, —

I knew I wanted to do this, and was totally ready, but I admit to being quite scared when I saw how large of a drop from that bridge it was.  But I purposely didn’t give myself anytime to think about it, I just strapped in, hopped over, and…

–3.  I screamed the whole way down out of genuine fear, and nearly somersaulted.  That was a thrill.  I just jumped off a bridge!

But now the downside of puenting.

It’s not really a bungee cord you’re on, but a cable.  Thud.  Oww, my chest.  I barely bounced when I dropped the 100 m, and then I swung like a pendulum.  Despite having my glasses off, I could see that a crowd had gathered on the bridge.  The scariest part was being retrieved – I was slowly dropped further down the gorge with nothing under my feet for another 100 m.  When they stopped lowering me, I was still just hanging there…with a cliff a metre or two away, just past where my foot could reach.

And then I had to wait for someone to run down from the bridge to the cliff and throw me a rope.  Oi, that felt like forever.  Plus a glasses-less hike back up to the bridge, and a quick glasses-less glance of a video that was taken (didn’t buy it), and then I was done.

So my chest and butt hurt a little from that harness and the resulting abrupt stop at the bottom of the fall, but I would TOTALLY do that again.  Whoo!

The three of us decided to head to the famous thermals of Baños next.  What we saw…we didn’t like.  Eww, dirty…and crowded.  There was a waterfall next to the thermals, outside of the complex, and people were washing themselves there too!  One particularly large woman was topless, only in her undies, and washing inside them…in public! 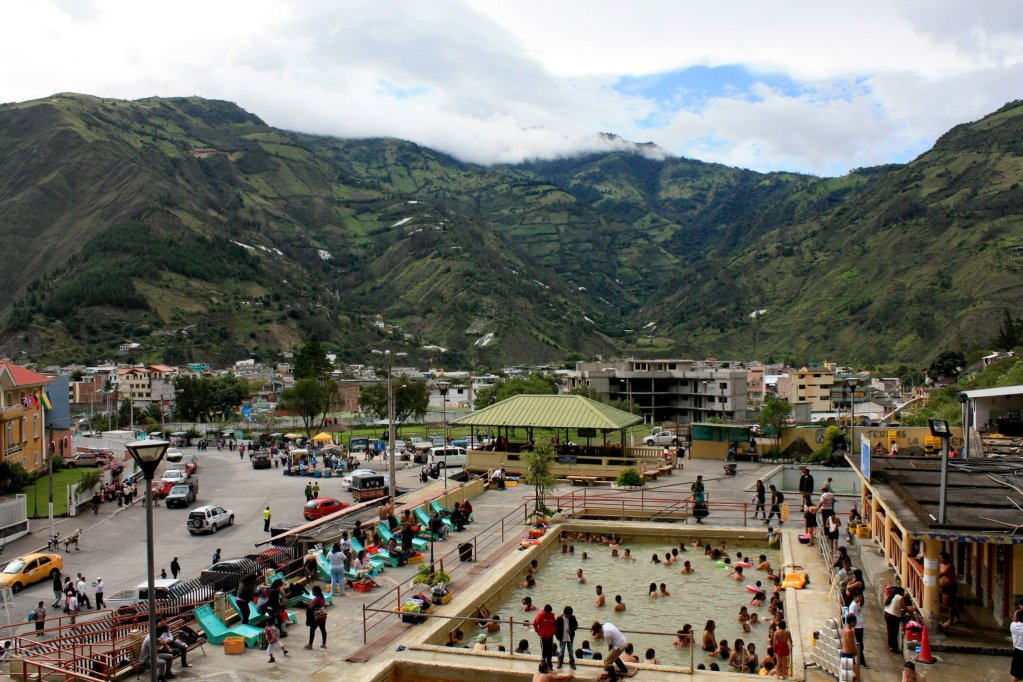 So…hostel pool!  Except it was freeeeezing – Óscar and I jumped in anyway.  But there’s a hostel jacuzzi too, for $3, but I snuck in for free (no one seemed to care).  And to add to the relaxation, I decided to go for something I hadn’t since Asia – a massage!  Only $20 for a full hour – more expensive than Asia, yes, but still darn cheap.  It was a little soft, but good enough that I fell asleep at the END for twenty minutes…that was slightly embarassing.

And finally, to top off a nice, packed day, the three of us headed for dinner.  My suggestion was Mexican food, since I was craving it – Silvia and Óscar are headed to Mexico in a few weeks, but I’m not!  We wandered around for about half an hour trying to find some, but only came across some sketchy-looking Mexican fast food.

Then suddenly, we stumbled upon…a Spanish restaurant serving tapas.  Despite originally saying they weren’t hungry and probably wouldn’t eat, Óscar and Silvia practically started drooling and marched right in.  (Clearly homesick for their food.)  The irony – they’re not headed home until September, and I’m probably headed to Spain next month!  Opposite of what we originally intended with that meal.

And the best thing though?  It was an authentic meal, and I let them do all the ordering.  Pulpo a la gallega, chorizo al vino, pan con tomate (and jamón serrano), crema catalana….mmmm!  Cheap too – much cheaper than Spain, although of course the food quality has to be a little lower here.  They’ve already written a giant guide for me on what to do – and eat – in Spain, so this was a nice preview.  It was hilarious to see Óscar gush about everything, eyes widening and nearly squealing everytime he saw something he liked on the menu or when Silvia mentioned another dish I should try.  I pretty much have to visit them sometime… 🙂

Only one city left!