Finish at the middle.  This is it: my final stop in South America.

I chose to end here because the place has some significance – I wanted to go from the “end of the world” (Fin del Mundo, Ushuaia) by surface transport to the middle of the world (Mitad del Mundo, Quito).  I’ve both exceeded and fallen short of this goal – exceeded, by going to Antarctica; short, by flying back to Punta Arenas, Chile (thus skipping a 12 hour bus ride between Ushuaia and Punta Arenas).  Oh well, close enough, more than enough!  I’ve travelled over 21000 km this trip (excluding the flights to and from Vancouver), over 7000 km of which was by bus.  Including the flights to/from Vancouver, I’ve travelled 40500 km, more than the circumference of the world.

But yet not enough!  It feels a bit like a cruel joke I played on myself – there’s so much more I want to see now.  Colombia, especially – and it’d be lovely to keep on going with Óscar and Silvia.  And after having my heart set on changing my flight, and then not being able to do so affordably, my original goal feels like I’m losing out on something.

I’ve always said to other travellers, ever since the very beginning – I’m so happy to have seen and experienced everything that I have in my travels, and I’d be satisfied even if I had no days left to live.  I may feel ambivalent and contradictory right now, but that statement will be true again eventually.

This “middle” thing has gained some new significance though – this is only the end of my first half of travel this year.  For now, I only know that Europe is next.  But where and what there…time will tell!

We arrived from Baños in the afternoon in pouring rain.  Well, that put a quick end to the day.

Our second day began with a walk through the beautiful Old Town of Quito – the first UNESCO World Heritage site ever (a title it shares with a couple other cities, I think?).  The colonial city is full of colourful buildings, restored or preserved quite well (save for a bit of graffiti here and there).  Truly a marvel, especially when you can see so many parts of it at once, with the rolling, hilly terrain that it rests on and that surrounds it. 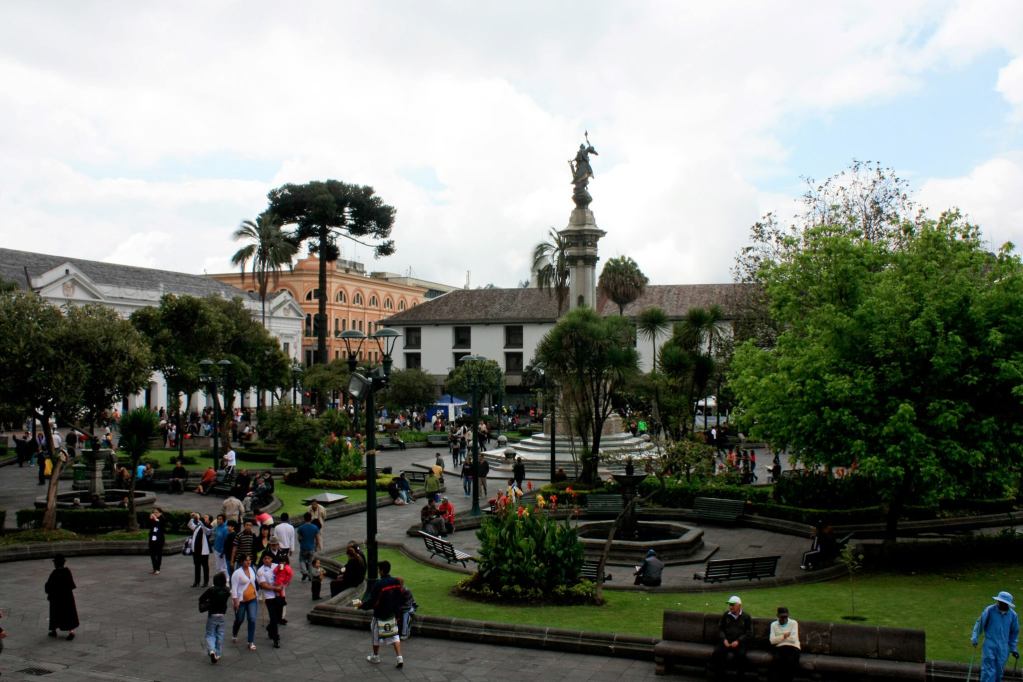 After I went solo for a tour of the Palacio de Gobierno (all in Spanish…at least I understood about half of it, or it would’ve been a pity), we headed to a few grand churches in the area, all of which were completely packed for Easter services.

Unfortunately, the sketchy safety reputation of Quito remains true – sure, there’s a heavy police presence, but while Silvia and Óscar were waiting for me to complete my tour, they spotted quite a few suspicious people, eyeing belongings, people at ATMs, and even an attempted robbery with a pistol that a policeman stopped with a quick whistle.  We had no problems though – we stuck to the main streets, which were still full of tourists.  It’s really a pity that such a beautiful location is marred with this kinda activity.

Aaaand then it started pouring again.  We waited until the rain was less heavy, but it was only 1 pm, too early to give up on the rest of the day – so I decided that we should head to Mitad del Mundo, a 1.5 hour bus ride away (two buses, and only $0.40).  Quito’s got a great bus system – cheap, at-grade but separated so it runs like a metro…but puzzlingly, its three lines cross each other but have either few or no transfer points.  A little more walking in the rain thus needed to reach the line we had to take.

When we arrived at Mitad del Mundo, 22 km away from Quito, it was still raining, although not heavily.  It’s like a mini city – restaurants, souvenir shops, but also a couple museums and pavilions.  After checking out a small-scale replica of the Old Town, some information on how the Equatorial line was determined (more on that later), and a really cool but kinda scary insectarium with giant bugs (alive and dead) from all over the world, we headed to the monument. 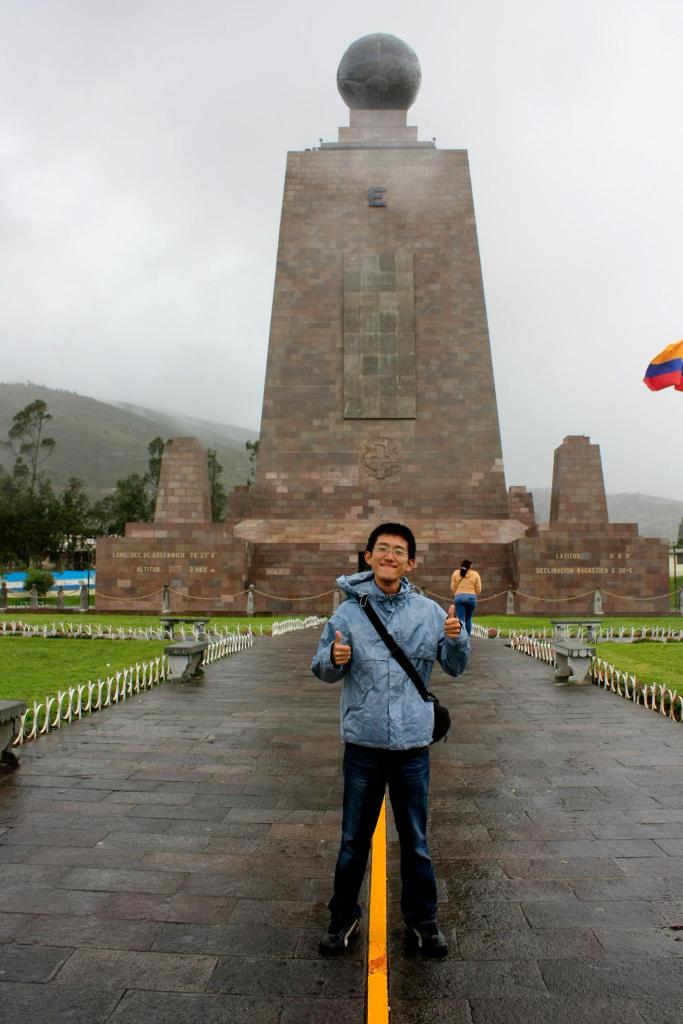 And there it was, a giant monument along with a sharp yellow line drawn on the ground. 0º00’00″…except not really.  According to Wikipedia, it’s 0º00’07″S.  The real line is 240m away, according to GPS measurements.  (Hey, the French guys got it so close when they marked it in the first place without satellites or modern technology.  Buuuut the indigenous were more correct: they had it spot on before the French.)  But there’s no monument there, and I’m blissfully ignoring that fact…close enough. 🙂  After some fun photos straddling N and S, and some walking back and forth…that was it!  I was as far north as I would go before flying home.  End destination reached.

Back to the hostel, one final helping of Óscar’s tortilla de papas, fooling around like children, and watching a movie before my last sleep in South America.  Ah, I’m gonna miss this so much.

Today…ah, such a mixture of emotions, but we still went sightseeing.  While in Plaza Grande, we ran into Ah Hong from Guangzhou, who I met in Lima in our hostel (while I was alone, after Isla de Pascua).  Cue awkward code-switching between Cantonese and Spanish and speaking the wrong language to the wrong person.  Oops.

We checked out two cathedrals – the Compañía de Jesus, the most beautiful church in Ecuador, with nearly every surface covered in gold, and the main cathedral in the Plaza Grande.  Neither allowed pictures, but I snuck one in the main cathedral – the only reason I wanted to go was because they have a painting of the Last Supper, but the main dish on the table is cuy!  We all agreed though, the lavishness of all the cathedrals (and often, the ridiculous admission fees charged) we’ve seen in South America seem to contradict the message of the religion.  Still…they’re pretty cool to visit if only to see some amazing architecture and works of art. 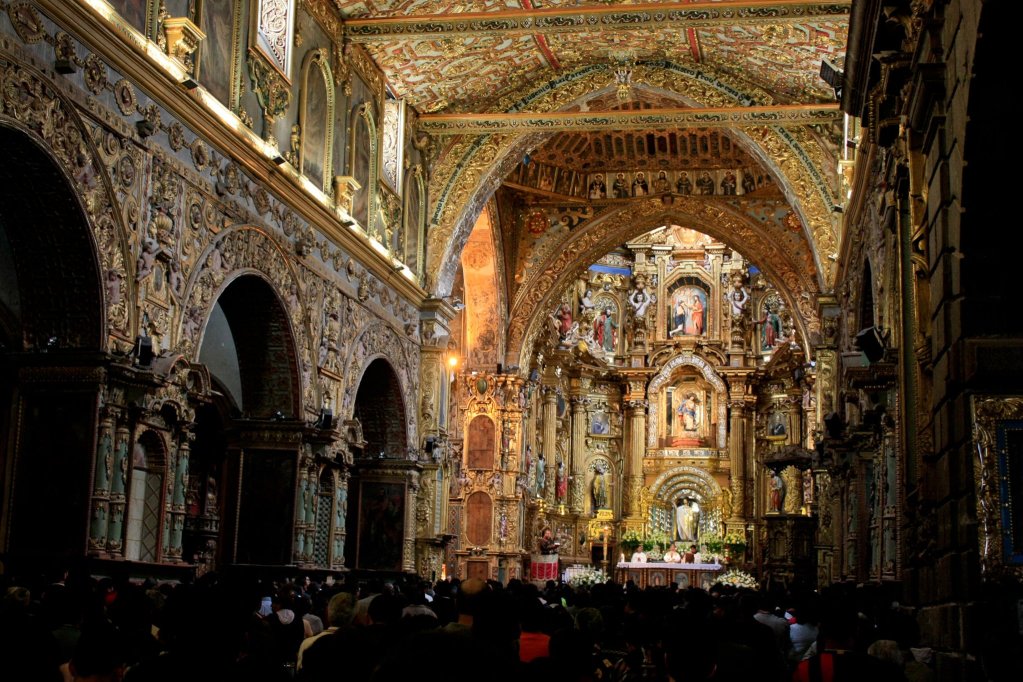 As it started to rain a little, we decided to hurry and check out my last sight – El Panecillo (literally “a small piece of bread”), a mirador/hill that towers over Old Town Quito.  Despite the clouds, the city is a sight to behold…and it looked like a live version of the miniature replica we saw yesterday.  Hehe.

We parted ways with Ah Hong shortly before lunch, and returned to the hostel and had our final meals together.  Of everything I’m gonna miss about this trip, it’s probably gonna be Silvia and Óscar that I’ll miss the most!  I laugh a little when I think of how our language barrier-addled communication began in Valparaiso, all halting and stuff…then fast forward to today, where we’re able (despite a few lingering difficulties) to talk freely for hours about home life and aspirations and matters more personal.  We’ve changed our trips for each other several times already – and we were meant to part ways in Lima, but I was happily surprised that they wanted to accompany me to the end of my travels in Ecuador.  I’m absolutely sure that this won’t be the last time I see them.

Nor of South America.  I don’t know when I’ll be back, but…I’ll be back.