It’s amazing how quickly I veered from “What am I doing here?!” to “Can I live here already?”

Well, I’ll start from the top. What happens when you lose that spark, the one that makes you want to keep travelling?

It’s certainly a odd time to have this moment, at the beginning of a trip. But in essence, this is the middle of a longer one.

I walked for ten hours on my second day (first full day) in Barcelona. Went from tourist site to tourist site. Everything was there, everything was wonderful! I started my day out in Parc Güell, designed by the architect Antoni Gaudí, whose work runs prolific around the city, walked the Gràcia neighbourhood, the sprawling Passeig de Gràcia with La Pedrera and Casa Batllo (two more works of Gaudí, and I went inside La Padrera), Plaça Catalunya, La Boqueria (one of many markets in Barcelona that could give Granville Island in Vancouver a run for its money), Las Ramblas, Plaça Espanya, Torre Agbar, and a bunch of other places in between. I got lost like 10 times trying to follow my map. (If you know your Barcelona geography, you’ll realise that many of these places are very far apart. I walked to most of them.) 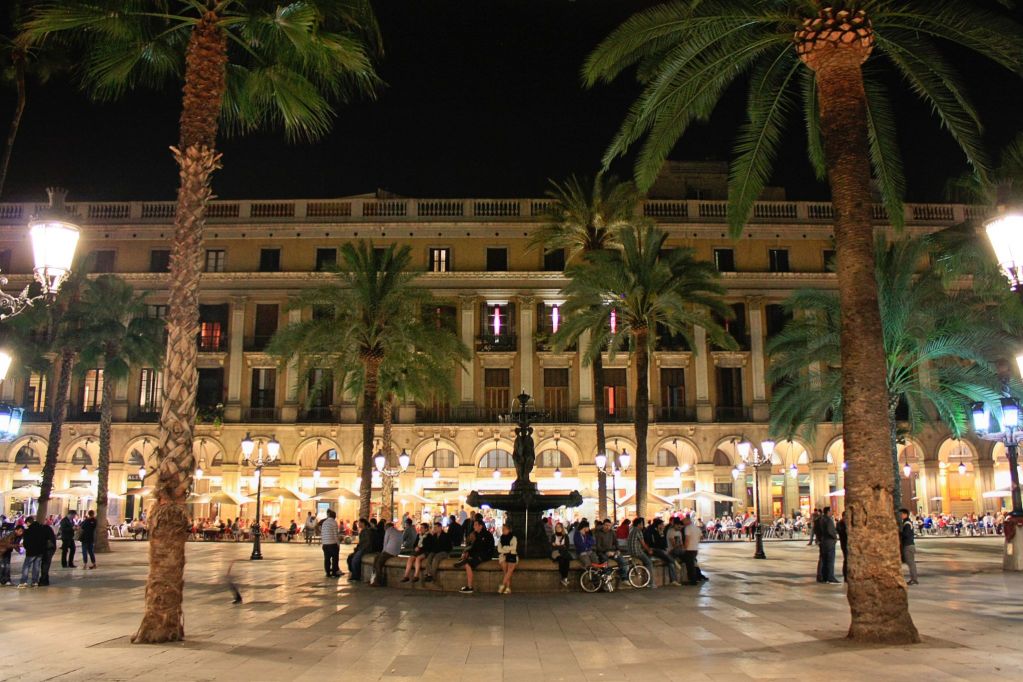 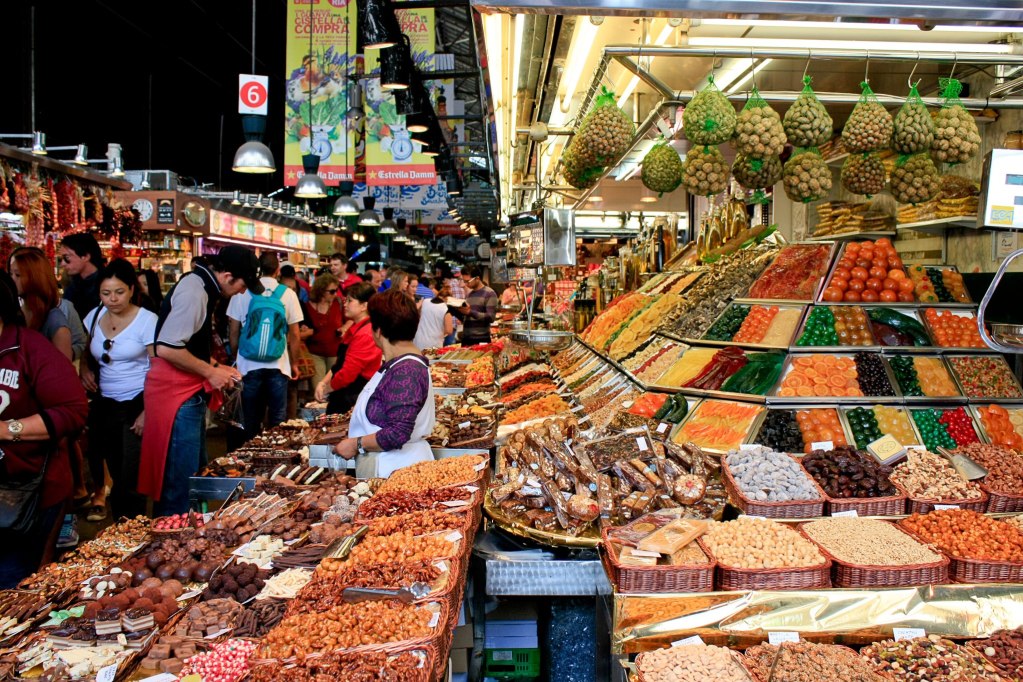 But I didn’t feel anything, and it wasn’t the fault of the city at all. In fact, I just got more and more depressed as the day went on. This wasn’t a feeling I ever had in South America. So what happened?

I felt alone for the first time, despite travelling alone for so long already. I had a list of things to see that Silvia wrote for me, and all it did was just make me miss having the two of them around. The lone highlights of my day were buying fuet and butifarra (delicious Catalonian sausage, her recommendation) in Spanish, surprising the proprietors and having pleasant conversations there. (I even had a little fun and decided to change my accent. I’ve largely dropped my Latin American Spanish habits and I now speak with an appropriate Spain lisp…at least when I remember to.) But I lost that sense of wonder – my legs were taking me everywhere the flow of tourists was- and with that, the constant inauthenticity of hearing English and French and German all the time, hanging around with pouting children in tour groups, and constant jostling for photo ops.

And I think therein lies the problem. Maybe.

I’m glad to say I had a spectacular second day. I’m really not sure what happened on that first day, but the spark came back, even through another ten hours of walking. (I really need to stop doing that or I’ll burn out too quickly.) I walked the Barri Gòtic (old gothic quarter, full of marvelous architecture) and avoided the tourist-crowded streets, letting myself get lost a hundred times…on purpose. Then I went to the Parc de la Ciutadella and did the same. And then Barceloneta, with its city beach…but wonderously cramped, pastel-coloured quarters, and did the same again. (Also, I laid on the beach for a bit…and touched the Mediterranean. Whoo!) Then I just went to some random plaza and took a nap on a bench, and repeated every area over again. 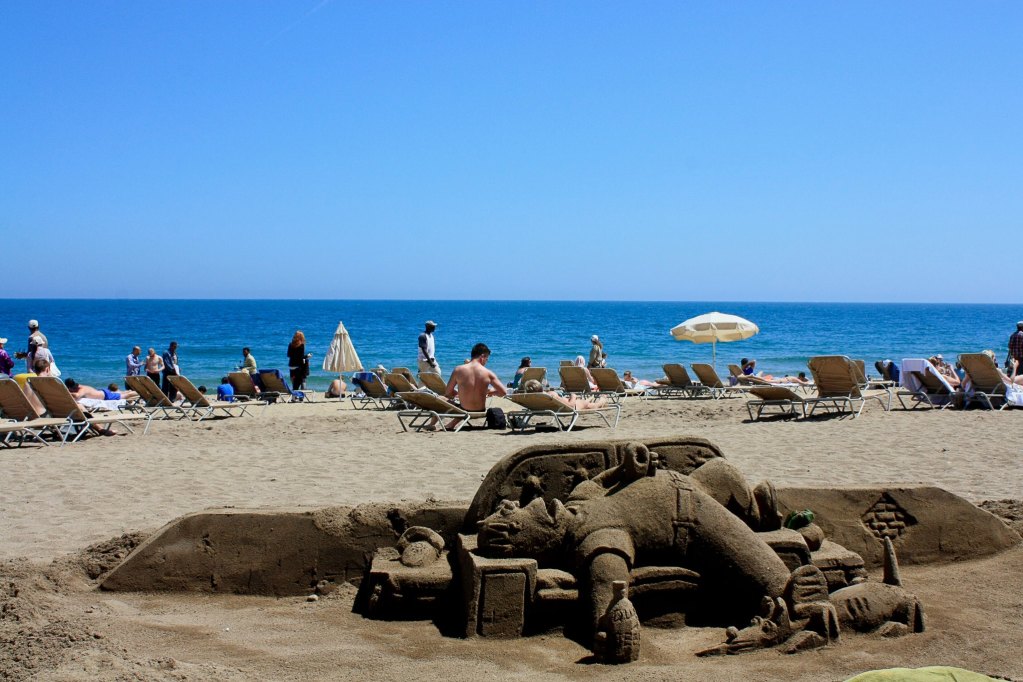 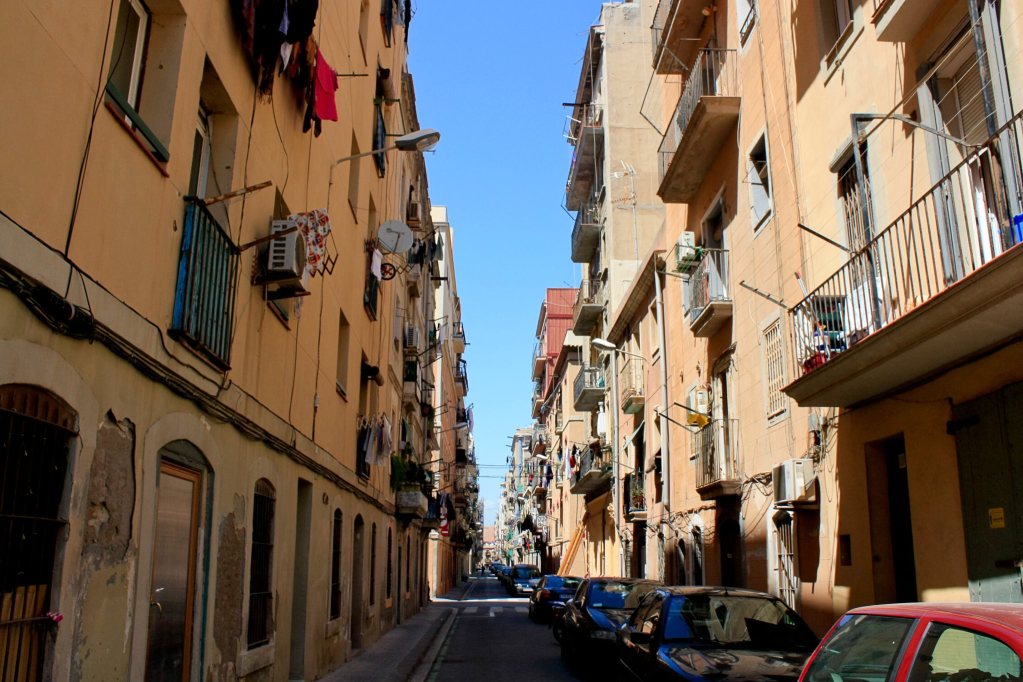 I appreciated the tree-lined streets, the sun-drenched warmth, the atmosphere (at least having avoided the tourist crowds, as simple as ducking into a side street and following the maze of dark and twisty alleyways full of nameless historical buildings and tall old-style apartments competing for space), and having Spanish music to listen to all day (thank you Oscar) certainly topped it all off. Despite seeing far less, I felt like I was seeing the city more. And I love this city! 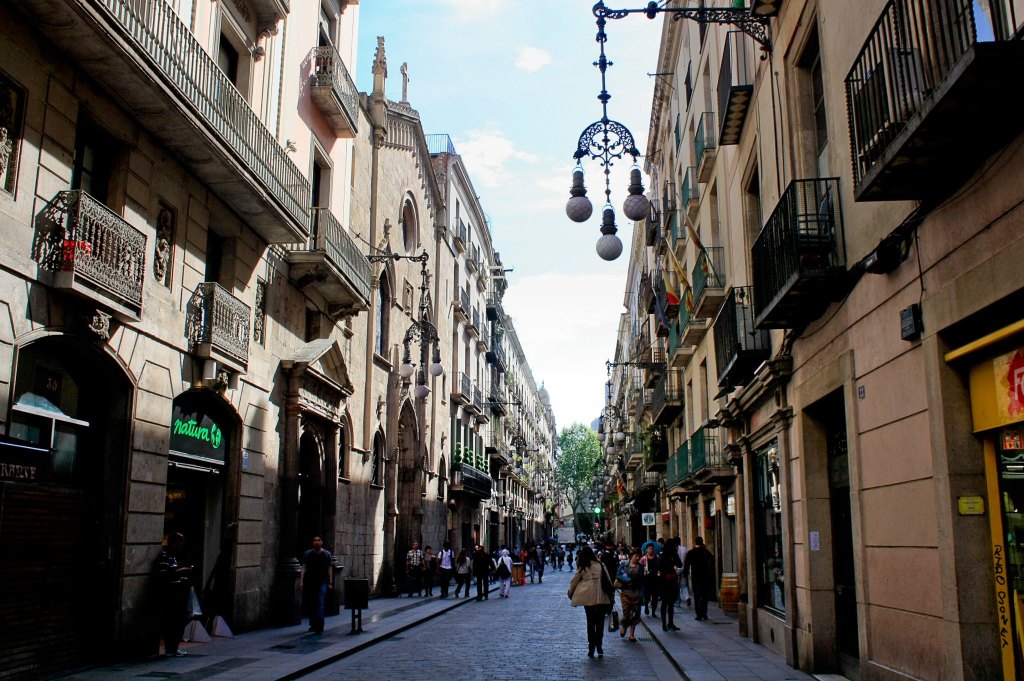 Clearly I haven’t learned much from three months away! I’m no good at ticking off things to see from a list.

There was one glaring thing, however, that really needed to be ticked off – the Sagrada Família, the Gaudí-designed cathedral that’s been under construction (and ongoing) for 110 years and counting. It is beyond words – a literal forest of stark-white geometry, rainbow-lit by stained glass, and full of intricate carving work. 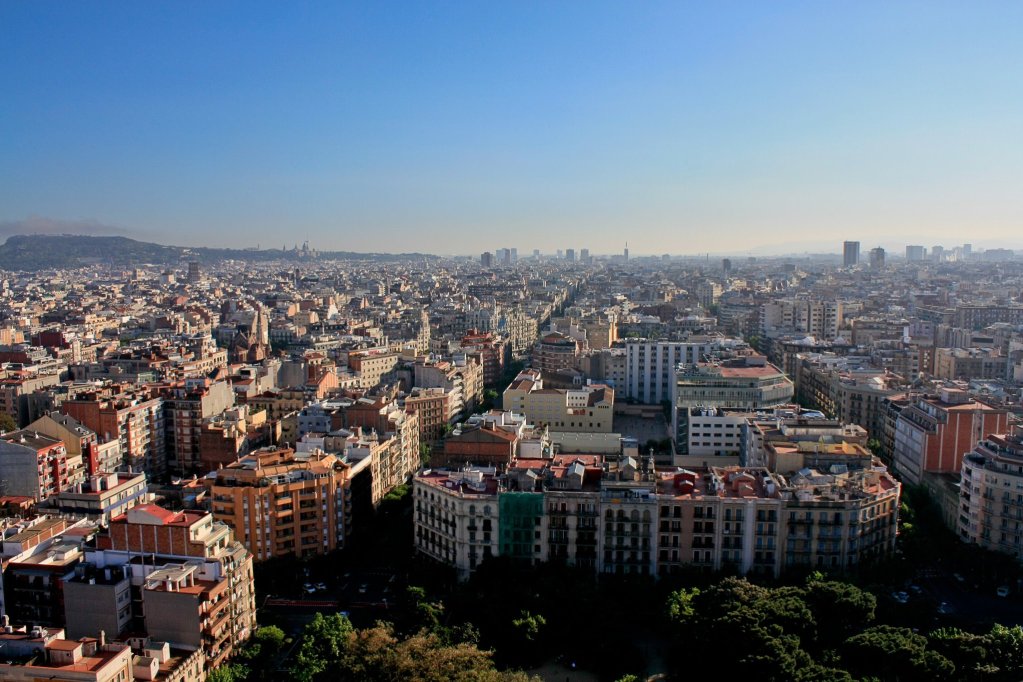 Staying in a hostel here has felt quite different so far. Most people are just on holiday for a week or even just a weekend. Far fewer long-term travellers than in South America. Plenty of nice conversations nevertheless…but it’s a different feeling and one that I’m gonna have to get used to.

Today, my last here, was equally lovely. Having nearly run out of things to do on the list, I opted to find some good food. Joining me was Maria, a recently widowed grandmother finding no excuse not to travel – every year now, she works for six months, then travels alone for six. We headed to Port Olimpic, a lovely stretch of beach and glitzy waterfront boardwalk (with mysteriously few foreign tourists) with surprisingly affordable and wonderful food – I had a menú del día of pan amb tomaquet (bread with tomato), gazpacho, sopa de marisco, paella de marisco (amazingly rich), profiteroles, small cakes with a shot of sweet liquer, a drink, and a coffee…for €10. Crazy. 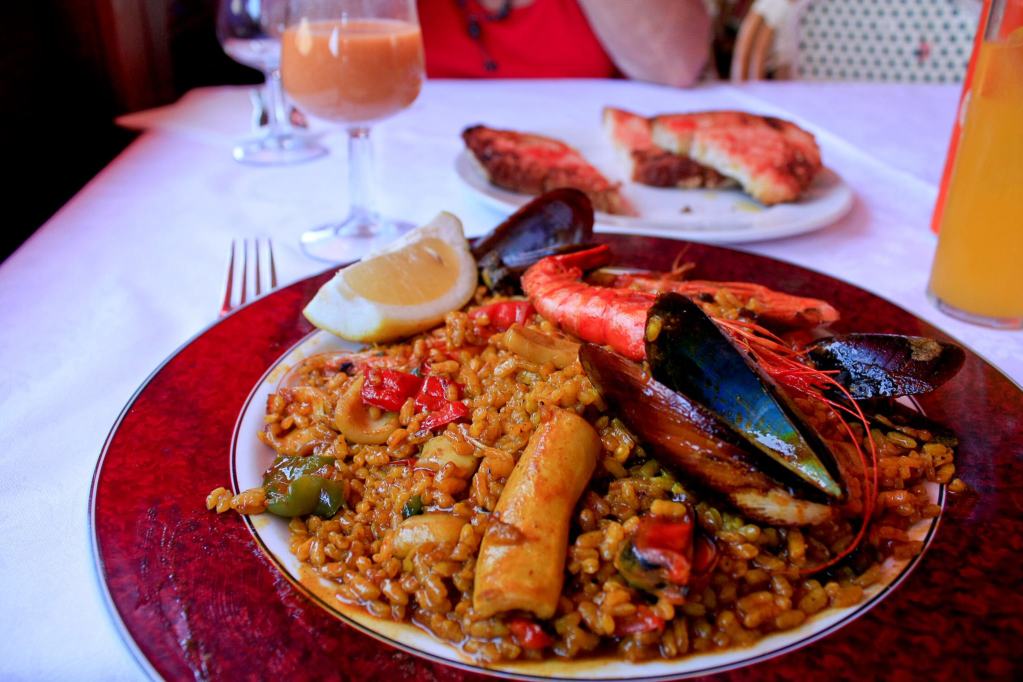 We split up shortly thereafter, and I went for the one thing remaining on Silvia’s list: Tibidabo, the mountain (and accompanying basilica) towering over the city. Getting there was quite the experience! The train line to Tibidabo was closed for some reason I didn’t understand (so much for being able to read Spanish), and the bus was the only option remaining. Except…I got different answers from the approximately 10 people I asked on the street. (I think my direction-asking in Spanish is pretty tight now…but understanding the answers is another thing when it gets complicated!) “Afuera del Corte Ingles” was the answer I got twice…except no one pointed out to me that there were two Corte Ingles store locations on two different corners of Plaça Catalunya! (Or maybe they did, and I said “vale” without understanding, as I tend to do all the time.) After walking for a few kilometres, following the random pointing and “maybe it’s over there” expressions from locals, I stumbled upon the bus eventually. I took so long finding it that my time-based transit fare ran out…I had to sneak on the connecting bus.

By the time I got to the base of Tibidabo, it was only open for another half hour. Still, I sucked it up and went for the €7.5 round-trip funicular ride – ridiculously expensive, I thought, until I saw just how long that ride was and how high we were going. A wonderful view indeed! I was certainly lucky to have seen it today – I passed many other tourists who were still trying to take the bus up there after it closed.

On my way back to the hostel, I passed through many of the sights I saw on the first day. It felt infinitely more enjoyable…and there’s really some magic to this city that I can’t capture in words. I may still be alone, but I certainly don’t feel it anymore. Can I live here already?

European destinations will certainly be different to travel through – more expensive, yes, that’s a given. But the huge concentration of culture and famous sites, I think, may threaten to overshadow any sort of pleasantness if I make any further attempt at tackling them all in some sort of clinical manner, like how many other visitors, whether alone or in groups, seem to unfortunately succumb to. I’m still working on it, but I think I’m hitting my stride…