Maybe it wasn’t such a great idea to take a night bus out of Barcelona to San Sebastián… I left at 10:15 pm and arrived at 5:30 am, having not fallen asleep at all the entire time. My hostel didn’t open until 9 am – actually, not even until 9:30 when I called, after no one answered the door. But I sat at the bus station (it’s literally an outdoor bus stop, thank goodness the weather was okay) until the sun rose just before 7, then walked around town, a little weary after three consecutive days of little sleep.

My first view of the Playa de la Concha…and my jaw just dropped. All the tiredness went away. 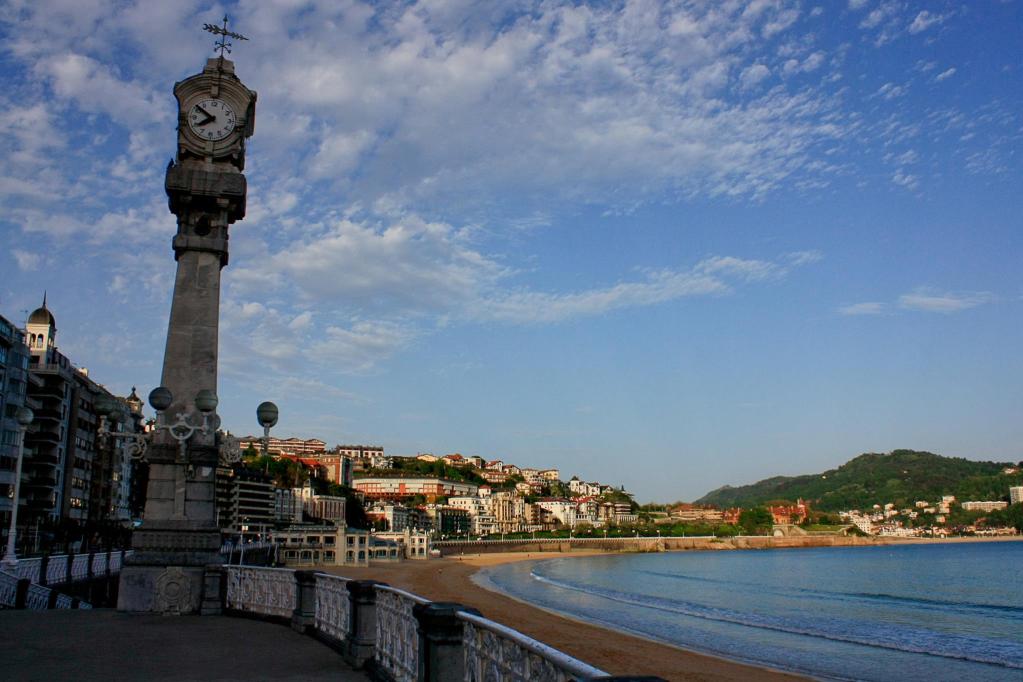 But first, a little intro. Donostia-San Sebastián is 20 km away from the French border, and in the heart of Basque country. You might’ve heard about the Basque-Spain conflicts in the past and their bloody fight for independence that to date has not come to fruition. The Basque side has vowed to cease violent measures, and things have been fine for years. It’s sort of understandable why they’ve fought though- they’re an entirely different people. The Basque language is Euskara, one of the few languages in the world with no relatives – and indeed, it bears no resemblance to Spanish, which thankfully also appears on most signs. Seeing it on signs everywhere was a bit surreal – if I didn’t know any better, I’d probably guess it was Polish or something, with all the odd letter combinations, x’s, and z’s that I’m not used to.

Anyway, back to Playa de la Concha (or in Euskara, “Kontxa Hondartza”) – a huge city beach of shallow, turquoise water in a big C-shape, ringed immediately by immaculate historical buildings. It feels almost surreal. At 7 am, there weren’t any crowds, just people jogging by the waterfront. The air was crisp and the sky wonderfully clear. Despite carrying my bags around, I went around taking some photos – a good thing, because the rest of the day was mostly foggy. Oddly enough, the temperature went down as the day went on.

After finally checking into my hostel at 9:30 and grabbing a light breakfast, I headed over to the Parte Viaje – the old town. Now, the central downtown area is nice enough, as I walked through it on my way to the hostel from the bus station and snapped many photos, but the Parte Viaje is downright gorgeous. There isn’t an ugly building in this town. Every apartment looks like my dream home, and its position on the coast of the north Atlantic makes me swoon.

I walked further to the port and then up to Monte Urgull – but unfortunately, fog was beginning to roll in. Sure enough, the whole city became relatively obscured, and it largely didn’t let up for the day. In a way, I was glad I got to town so early, cause I got some very nice pictures at that time that I would’ve have been able to get otherwise! 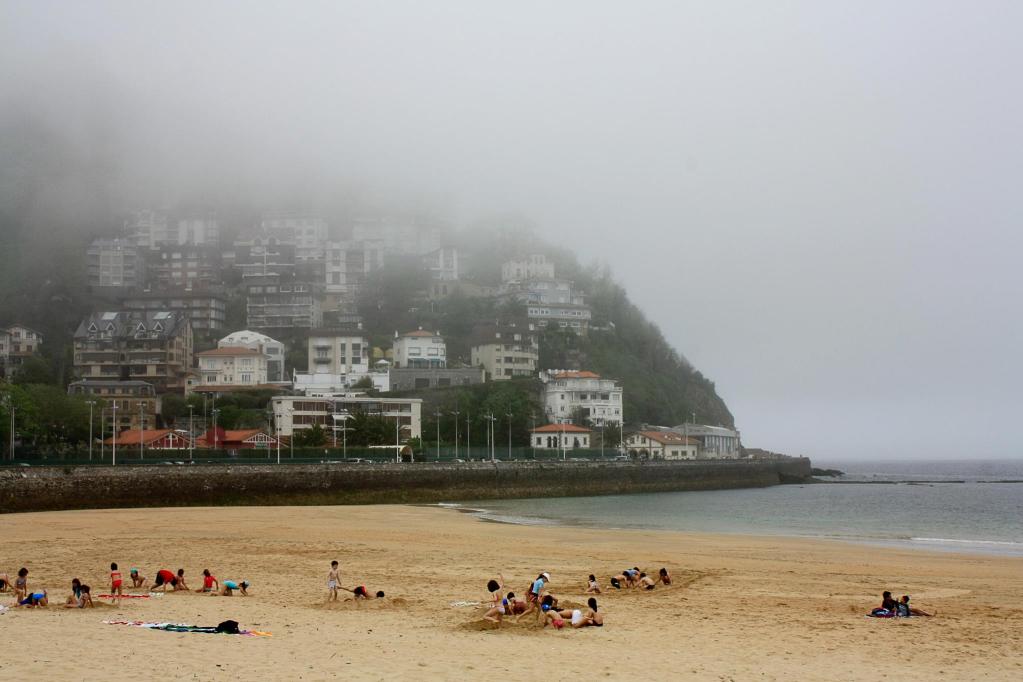 Despite the fog, I walked along the water to Parque del Miramar, with its English-style castle, and to Peine de Viento (“comb of the wind”), a sculpture that gains remarkability for its striking setting, jutting out among rocks.

Needing a rest and having an excuse to do so due to the weather, I headed back to my hostel, eating and picking things up along the way. The hostel owner, Miguel, complimented me on my Spanish (he originally thought I was an exchange student studying in Barcelona, after I mentioned my bus in the morning)…it’s nice that I can keep up now with the pace, but I’m forgetting a lot at the same time. I forgot the word “almuerzo” (lunch) when asking for recommendations, leading to some awkward silence. When buying a croissant for the next day’s breakfast and wanting a plastic bag, I ended up having to asking in Spanish for “paper or something to pack this in”, as I couldn’t recall the word for a bag. Random embarrassing moments here and there.

Also at the hostel, I met Mohi, a Swiss student currently studying in Madrid (ah, maybe that’s why Miguel assumed my background as such…). His fluency in five languages (French and German due to being Swiss, English and Arabic due to being Sudanese, and now also Spanish) totally blows away any hubris I may have with my languages! Amusingly, we couldn’t quite decide on a language to communicate in when we met – we had an entire conversation in Spanish, despite both of us suspecting that the other knew English. We eventually settled for a mix of both, leaning more on Spanish since that’s what he uses more.

The sun came back out, and there was my chance to go on the beach! Ahhh…I ended up napping a bit there, partly due to sheer fatigue, and partly because the sun was so comfortable. I think that’s becoming a recurring theme. The clouds and fog came back about two hours later, and unfortunately for me, I had just gotten out of the relatively cold water. Oh well.

After cleanup, it was time for the one thing I was looking forward to the most – food. Basque country is renowned in Spain for having the best food in the country, and its famous cuisine mainly comes in the form of pintxos (“tx” pronounced like “ch”), which are like tapas gone mad. I tried to ask Miguel for recommendations of things to try, restaurants to go to…but he couldn’t. He told me to simply go bar-hopping in Parte Vieja, and pick what I liked. I was confused and thought he was just trying to brush me off…

But then when I got to the Parte Vieja again, I understood why. The streets were lined with bars and tavernas, many with people spilling out onto the streets. And it wasn’t drinking that people were doing (although some were), but eating. You simply wander into a bar, check out the pintxos they have on offer (all laid out on the bar), and pick what you like. If you don’t see anything you like, you can just wander off. 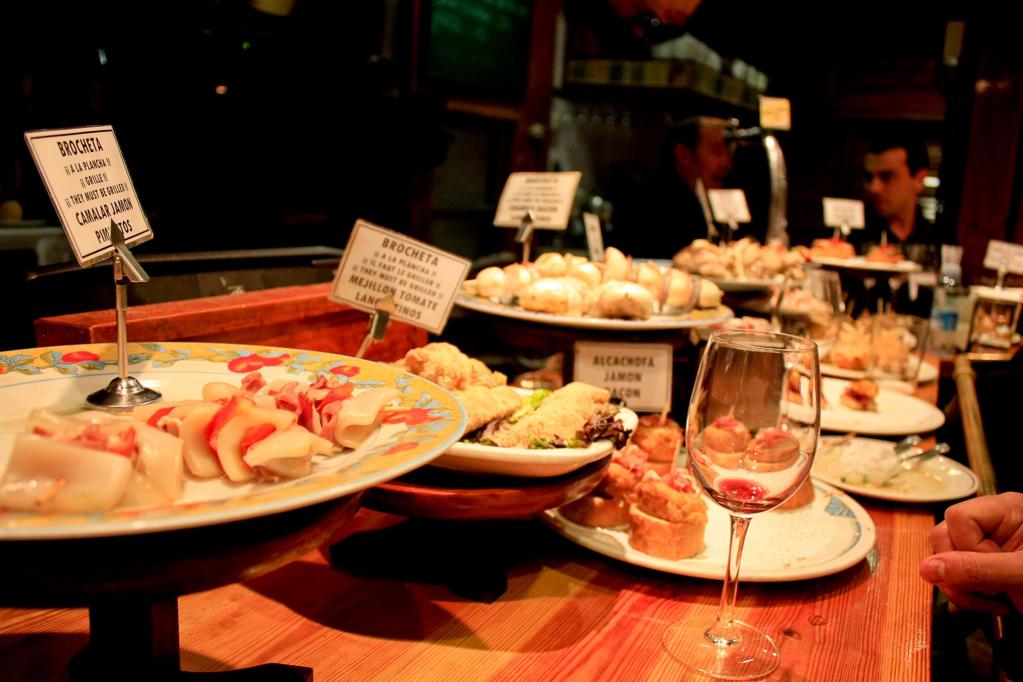 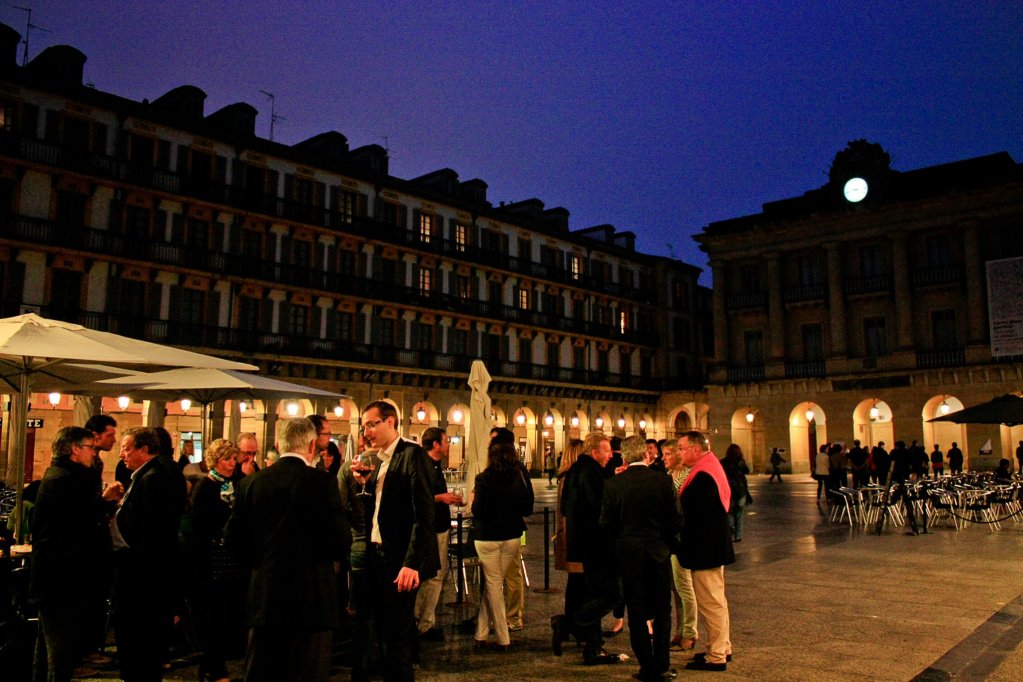 And these pintxos…wow! Definitely the best food experience I’ve had in all of my travels so far. Platter upon platter of colour, creative combinations, and daring flavours! I wandered in and out of maybe 25 establishments, tempted many times, but settled upon the ones that REALLY caught my eye:

All were absolute home runs, but my clear favourite was the pistachio/bechamel croquette. I’m gonna be dreaming of that for days to come! Sure, I didn’t eat much, but it was sufficient to fill me up, and with a pretty decent glass of rosé for another €1 to wash it down, my total was €11.1 – really quite reasonable for gourmet food! It took all the self-restraint I had not to just eat more and more on my way back to the hostel… 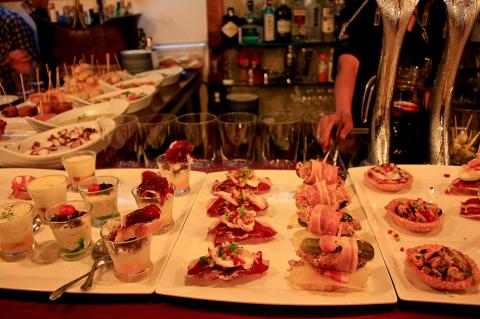 …Well, there was always the next day. After finally getting enough sleep for once and waking up late, Mohi and I headed off to the Parte Vieja for more pintxos for lunch (and for him, his first time). I had a lovely…thing. A cylindrical pie crust filled with tuna, with slices of a sharply salty Iberian ham on top – Mohi’s treat. Delicious! Knowing that pintxos are pretty much sold all day makes constant snacking a dangerously expensive reality.

I left in mid-day to Bilbao, where I currently am and will stay until tomorrow afternoon.

More dreary weather, but walking around Bilbao was pretty pleasant – the Casco Viejo (old town) in particular. I also made my way to the Guggenheim museum (designed by Canadian architect Frank Gehry – hmm…looks like the MIT Stata building all over again.), the Gran Via (shopping street), and did a bit of wandering in general. I ended up in a bookshop reading an iPhone app development book in Spanish…huh, guess I still have a little bit of my profession left in me. (It also occurs to me now that learning to code must be rather difficult if you don’t know English, given all the English function and class names in most programming languages!) But I also stumbled upon the Lonely Planet guide for Canada written in Spanish – sure, it’s the translation of the English version, but with a little appendix and mini Spanish-English/French dictionary. Kind of hilarious, the foreword with generalisations they make about Canadian English – not only the typical “eh?” and “oat and about”, but some expressions so random I can’t even recall what they are.

But of course…I ended up in a pintxo bar.