After a night full of crowded streets (football match, Bilbao lost) and a lovely morning walk through Bilbao’s Casco Viejo – and of course, more pintxos, for the last time – it was time to head out of Basque Country. A two hour bus ride through some very beautiful coastal roads (I wish I had taken more pictures) brought me to Santander.

Despite my hostel being literally one block away from the bus station, it took me almost half an hour to find it! Fail. I didn’t have a map…and neither did my hostel. The tourism office closed very early on Sunday, and I couldn’t get a map there either. For the first time, I just walked around aimlessly.

Fortunately, “aimless” is pretty easy in Santander. Santander is a major port of entry into Spain, where ferries (24 hours) come from the UK a couple times a week. There’s a ferry terminal somewhere…but also a huge coastline, and thus a very pleasant promenade to walk on. Eventually, I found a map or two on random information stands spread kilometres apart…but they were so small that they didn’t help too much.

Silvia wrote to me that there’s a “centro historico” in Santander that’s pretty pleasant to walk around. It doesn’t exist! Hahaha…she contends that there is, but nooooope. Santander used to have a centro historico, but it burned down – in its place, a grand boulevard with elegant buildings and plazas, almost with a French Riviera feel (not that I’ve ever been, but it’s what I imagine). It’s very prim and proper. Further from the coast though and into town, there admittedly isn’t much, but walking around in general is pleasant and peaceful. 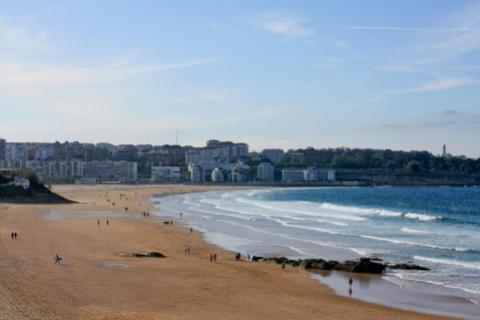 But anyway, on my first day, having no idea where anything was, I just walked along the coastline past many very pleasant beaches, and to the Peninsula de la Magdalena – home to a couple beaches, yes, but also a palace that looms overhead.

After walking nonstop for about three hours, I returned to my hostel, and decided to give Silvia’s other recommendation a try. The most common food in Cantabria is cocido montañes (“mountain stew”) – ironic that for a rich and posh resort city like this, the most local type of food is known for being for the poor. (Indeed, this dish isn’t served in classy establishments.) When I mentioned that I wanted to try this to the girl at the hostel reception, she pretty much started drooling and gushed about it so much that two others at the hostel joined into what turned into some long, drawn out conversation about nothing in particular. Quite enjoyable, actually! She Googled up a local restaurant for me to try it, and the three of us headed out.

The other two who joined me were Naiara, a Brazilian exchange student currently studying in Madrid, and Adrian, from the largest of the Canary Islands. We were all pretty hungry, given that it was almost 10 pm…so they separated into a Spanish chain restaurant for montaditos (mini sandwiches) while I went off on my own. However, I found that the restaurant for cocidos montañes was closed, so I just returned and joined them.

The next day, we all decided to head to Playa de la Magdalena. We couldn’t have been a more unlikely gang. But it’s the beauty of meeting people while travelling – you hang out with people you pretty much normally never would. Naiara talked about her time split between studying hard and partying hard, Adrian shared a little too much about body art and debauchery, and I probably seemed like the weirdest boring person on Earth to them. Eventually, our conversation turned over to languages – as has been common so far, people have been asking me why I speak Spanish – and we had a bit of language exchange going on, me learning some Spanish words while they soaked up some English. Some random sunbathing woman overheard us and all our languages (Naiara and her Portuguese, me and the other few languages I have) and even came up to us and commented, perplexed. But anyway, the three of us got along swimmingly (and swimming in that freezing cold water), and dug a little deeper – Naiara wanted to try an internship in China and see if she can find work there, while Adrian has been working two jobs and trying to learn English earnestly.

After we said our goodbyes, I had the rest of the day to walk around town (again, not much to see), and then I was determined to try cocidos montañes – and indeed, I stumbled upon one restaurant serving it! It was a ton of food…a stew with beans, chorizo, chicken, blood sausage, and a whole ton of other stuff, served with bread. Couldn’t quite finish, but it was delicious! A little on the pricey side at €10.50, but worth it.

With a lovely quiet hostel and a chill atmosphere, I’m sad to say goodbye – next stop, Madrid!

Trying out the furniture 📸 @t_rainie