The six hour bus ride from Santander to Madrid was gorgeous, full of picturesque little villages set in front of mountains and valleys that zoomed by in a flash – I wish I had taken my camera out earlier. But then this happened.

A fellow passenger hopped on about halfway through the journey in Burgos. As I was chilling out to my music and enjoying the scenery, he tapped me on the shoulder, asked if I knew Madrid (I said no, and that I was just a traveller), then asked if he could join me – despite the bus being nearly empty.

Turns out he’s an immigrant from Ecuador. Speaking in clear but rapid-fire Spanish, he then proceeded to rant at me for the better part of an hour about his job situation. I couldn’t understand much more than half of what he said, and I even hinted so – but he kept on going. Not wanting to make the awkward situation any worse (other bus passengers were just kinda staring, hoping he would shut up), I lied about my own background and how much I could understand, in the very few responses I gave him.

He had asked me what my wages were and how the cost of living is in Canada. He said that in Ecuador, the average wage is $5/day (perhaps that contrasts with what I saw while in Ecuador, since meals cost about $2-3, and there seemed to be little poverty on the streets in the cities). Then he talked at length about how he immigrated to Spain 10 years ago, when things were much better. Now, something something something everyone wants money, he tries to find work in the fields and farms and can only get €50/day (I suppose that’s not enough to live by here), and he had just hopped on the bus from Burgos to Madrid on a one-way ticket because he couldn’t find any work in Burgos. He’s trying to avoid living on the streets – either that, I’m not sure, or he already is. Something something about people here not having hospitality or offering jobs, while in Ecuador, if he walked up to some stranger’s place, they would offer him board and work? The rant became a somewhat incoherent ramble, and I felt sorry for him – but what could I say, even if I did understand him fully? It was all a little too awkward for me…and luckily for me but unfortunately for the other, he moved on and sat next to another woman, seemingly ranting again for the rest of the bus ride.

When we finally got off the bus, he kept trying to get me to wait for him, saying something something about a friend and housing. I got the impression that he was trying to sell me a room in his friend’s guesthouse? Whaa? Frustrated, I gave up, apologised for not understanding him, and left.

After checking into my hostel, I went for a walk around town…and stumbled upon a protest.

May 14th is the one-year anniversary of large-scale protests in Spain for social reform. This year’s protests was on the same day (I passed by a few smaller demonstrations in Bilbao), but people have decided to make it several days. In Madrid’s Puerta del Sol, the main plaza in which they usually hold New Years’ celebrations, there were a bunch of demostrators and commiserators listening in, nodding and applauding – the numbers were large, but not as large as I knew it had been based on the news.

I didn’t have to listen or read the signs (although I did) to know what they were talking about – if you’ve been paying attention to the news, Spain is in deep trouble, with a sky-high unemployment rate, especially for the younger generation. It also doesn’t help that they’ve got some pretty corrupt politicians and they’re in deep debt. Voting feels futile to them since they’re stuck with two terrible parties, with the smaller ones barely able to compete due to their voting system. (Sound familiar?) 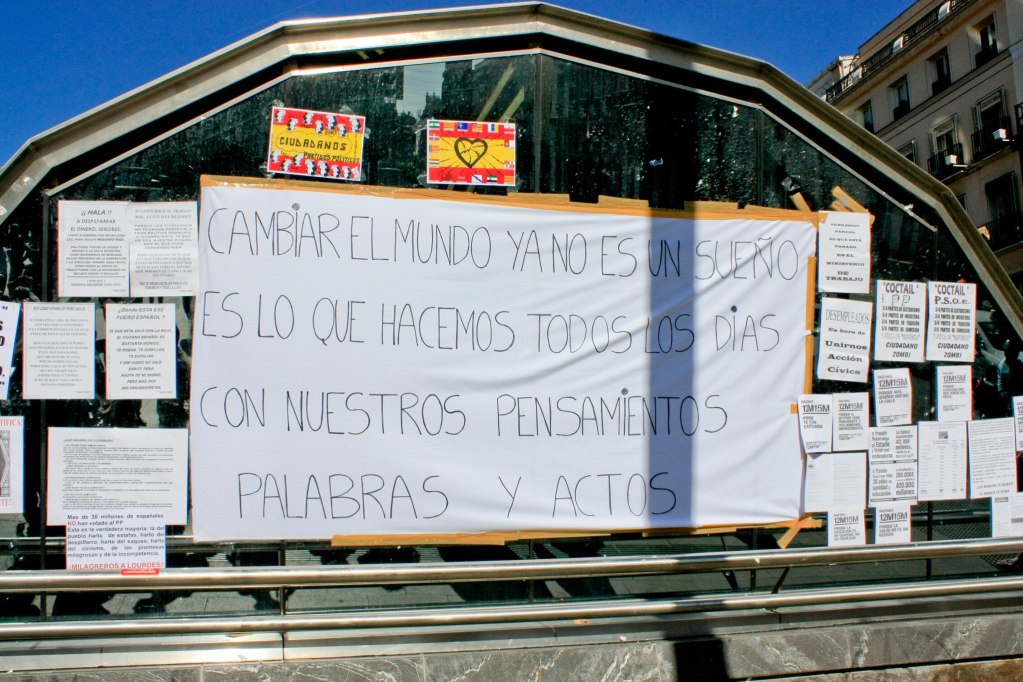 I’ve seen a few signs of this economic downturn – I talked about it before with Silvia and Oscar (who say the situation is bad, but that there are menial jobs that can be taken, yet a generation of overqualified students refuse to stoop down), saw several people inquiring for work at places I was eating at in Barcelona (the answer was no, and they’d then ask if there were any places in the next few blocks with work available), read the news recently about how even menial jobs are hard to come by for the well-educated… And thus it seems that my impression of how bad their situation is gets worse and worse.

As I walked around town, I saw a few more protest signs hanging from balconies, scribbled on walls… but soon enough, it felt like a characteristic of the city. I wonder if it’s normally like this, or if it’s because of the one year anniversary. Nevertheless, I’m not going to pretend I understand the situation, nor will I pick a side – I do feel for what people are feeling frustrated about, but I’m not here to offer solutions. 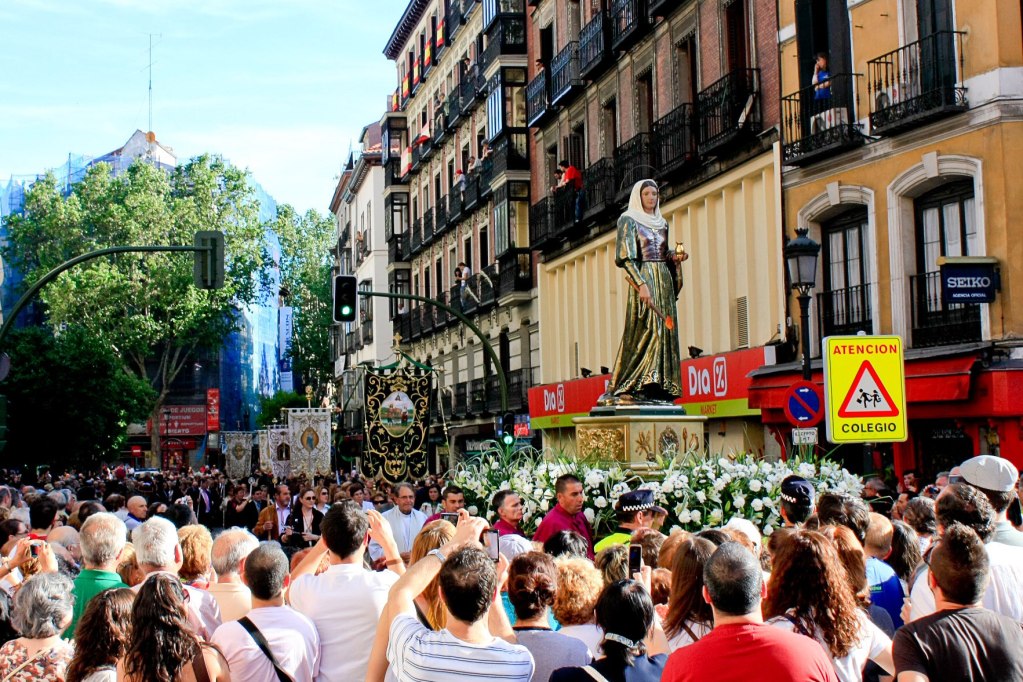 Blitzing through the city’s famous buildings and areas didn’t give me much feeling beyond the usual big city, especially when seeing everything without knowing its historical context, but again, my favourite time came from getting lost in the old neighbourhoods. After being stuck behind a church procession due to some saint’s holiday, I wandered into La Latina, one of the older sections of town – people were dressed up all fancy, and the older ladies mostly had some traditional Spanish clothing on. I stumbled upon a very crowded restaurant there that happened to be one of Silvia’s recommendations. Despite the menu being posted outside, I couldn’t see either of the things that she recommended to me on it. Nevertheless, I worked up my courage and went in… 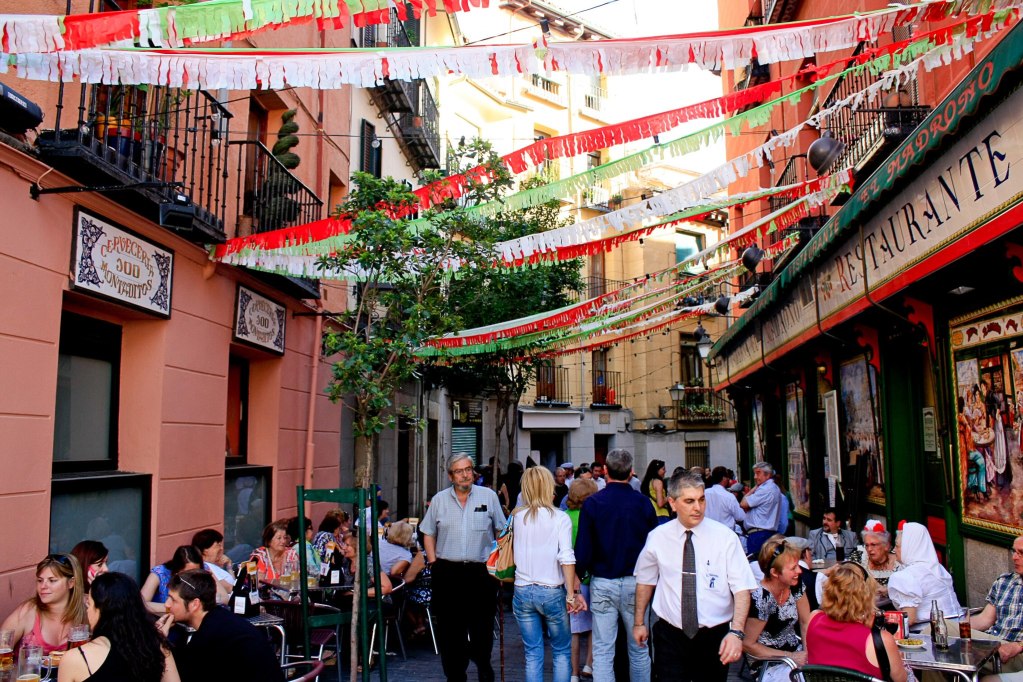 It’s gotta be weird to go into a restaurant, approach the manager, and ask something like this:
“Una amiga me dijo que tengo que ir aquí para probar ‘alcachofas con jamón’…” (A friend told me to come here and try…)
He grinned and nodded.
“…y un ‘postre torrija’?”
As if I mentioned some sort of secret code, he patted me on the back, motioned for me to take a seat, and five minutes later I had my food. So it turns out that alcachofas are artichokes – something I hate, but it was delicious! I don’t know what it was marinated in, but the artichokes were soft like potatoes, there was some sort of white wine taste, and mixed in the ham, it was divine… And the postre torrija turned out to be a piece of giant toast that had the consistency of bread pudding. Plus some sangria, olives (again, something I hated but have grown to appreciate a little), and bread, a very lovely meal…until I got the bill. €19.50! Ouch! Worth it though, just this once.

I then walked past the Palacio Real, a whole bunch of famous cathedrals, and saw the sunset at the Templo de Debod. Nice night, but exhausting.

The next day, I decided to take advantage of my Peruvian ISIC card and check out some museums for free. Normally, I’m not a museum guy, since once I pay, I feel like I have to get the most of my money’s worth and see everything – but without that pressure, I felt free to just see what I felt like was enough and leave after an hour or two. The Reina Sofia museum was spectacular just for Picasso’s Guernica alone – despite his abstract style juxtaposing random body parts, the terror and pain he captured in the enormous painting of the Guernica bombings in the 30s felt raw and real. The Prado museum had a bunch of religious art – not something I’m particularly interested in, but at least it was pretty.

In between, I hit up Silvia’s second food recommendation – a calamari bocadillo (mini sandwich) just outside the Reina Sofia museum. Wowwww. And at least this one was cheap. 🙂

Spain has been a lot more multicultural than I thought, and Madrid’s Lavapiés area speaks to that. Store after store of Chinese and Indian vendors, plus some random North African businesses and the odd Spanish one sprinkled in between. A very working class neighbourhood with some many cultures existing under the same Spanish architecture. It’s funny, I never think of other countries the way I do of Canada or the USA – there are plenty of immigrants here in Spain too, and they speak Spanish, just as immigrants in North America have to speak English.

Having walked pretty much everything, I made it a short day and returned to my hostel. This hostel is a bit crowded for my tastes, but it’s awesome. Free paella for dinner one night, free spaghetti another, and churros with chocolate every day for breakfast.

Since the sights were few, I chose to shorten my planned length of stay in Madrid, and spend the last one in Toledo, a city close enough for a daytrip. Toledo is a UNESCO world heritage site, and it’s easy to see why – it’s like a medieval fort! I got lost so many times in the disorganised streets, but it was fun just wandering around and soaking in the atmosphere. Plenty of tourists, but when everyone’s getting lost, you’re bound not to run into too many people anyway. Still, when a city has banners and chandeliers hanging over the streets (kinda hard to describe without pictures), it’s awesome. 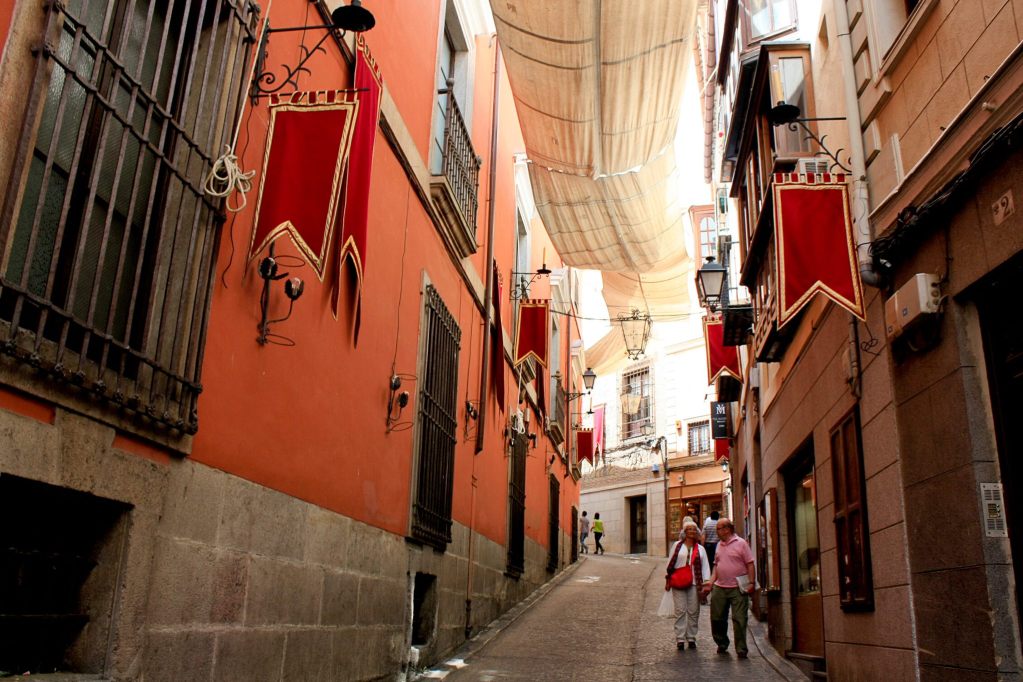 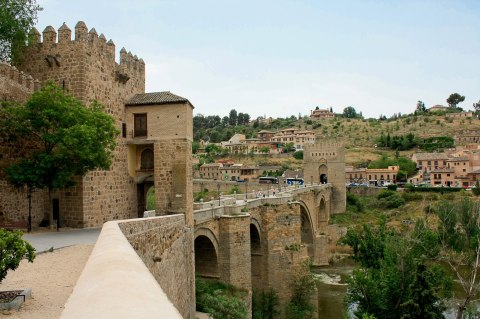 To be honest, I’m a little tired of big cities at the moment. Madrid wasn’t quite that enjoyable in that regard, although OMG food. 🙂 I’m now halfway through my time in Spain, and my next stops won’t do much to alleviate my fatigue, but hey, I’m looking forward to see what I’ve heard are very different regions…that are also much cheaper!