Having gotten little sleep in Madrid (good hostel, but everyone seemed eager to go out and return in the early hours of the morning), I was quite ready to leave. I resolved to head to Salamanca, but to stop in Segovia first if I woke up early enough to catch the bus – which I easily did, when some people in my dorm came back at 5 and snored so loud my earplugs didn’t help…

I had three hours in Segovia, which was more than enough for the pleasant but very small old city. The view is dominated by an enormous Roman-constructed aqueduct, a marvel to behold. Along with a pretty plaza, a castle on the edge, a nice view from the walls, and a museum visit about the geography of the area and its history as an industrial center for glass and wool, the visit was short and sweet.

I got into Salamanca in the afternoon. It’s a pretty small city, but is renowned for having the first university in Europe…which I didn’t bother checking out. But plenty of students around, and its campus is in the historic center. The rest of the center is pretty small but very pretty, especially the Plaza Mayor, probably one of the best I’ve seen in Spain so far.

The old and new cathedrals in town are either side by side, or one and the same – I couldn’t quite figure that out. Thankfully, admission was free! I’ve grown quite tired of seeing the insides of cathedrals over and over again, so without the money incentive thrown in, it was pleasant to just take it in quickly and move out.

The more interesting thing about the cathedrals though is the restoration: outside on the facade, each door is covered in ornate carvings. One door, however, has a bit of a hard-to-spot curio: an astronaut, and a tiger holding an ice cream cone. Huh!

After finding the little easter eggs (thanks to seeing a small Spanish group pointing it out), I attempted to head to the river – having passed the opposite side by bus, I remembered there being a little park path by the water, with some great views of the old city. Despite having a map, I got lost in the maze of streets, and continuously ran into a girl with a hat and a red shirt, who I had seen earlier in the day in Segovia, then on the same bus as me to Salamanca…

We both recognised each other, and realised we were both trying to head to the same bridge to cross the river. After the usual quick “I can’t tell if you speak Spanish or English” exchange in Spanish, she introduced herself. Vanessa’s working in Galicia at the moment (she’s a native Spanish speaker from the States), and decided to do a bit of a whirlwind weekend trip that didn’t go quite as planned (missed a train). We eventually found the bridge, and had a very pleasant few hours just hanging out, wandering around, and talking.

After showing her the little cathedral easter eggs, we puzzled upon something we both heard about a hidden frog above a door. I had misheard Silvia and thought it was also on the cathedral doors, and had looked for it earlier, after the astronaut and ice cream, to no avail. However, Vanessa heard it was above the university – and after asking someone about it, confirmed it.

We headed to the university and found a group of tourists standing in front of the door, looking up. Seems like the right place! Vanessa quickly pointed out a tiny little frog perched on a skull decorating a pillar. Locals say that spotting it is for good luck, especially for exams. We had more fun watching the big crowd of tourists all pointing in the same direction and trying to spot it… 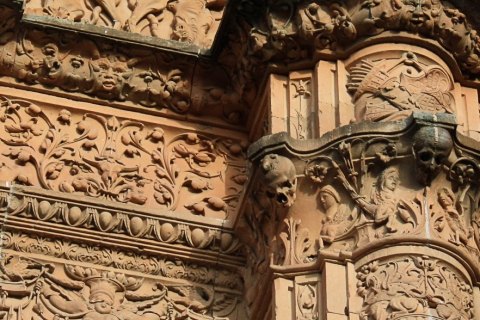 We had a quick cheapie dinner and headed to the Plaza Mayor again, hoping to see it light up at night like in the postcards. That was not so…strangely. Maybe we didn’t wait long enough! We did have fun doing what the locals did – sitting on the ground of the plaza just chatting. Unorthodox, but that’s what happens when there’s few benches, I guess? We had to cut the night short when it started raining a little and it got surprisingly cold. A quick hug goodbye (she was off to overnight on a bus), and I ran back to my hostel. It was very nice to have company again while exploring – something that seems to have been lacking so far in this trip!

And after three sleepless nights in Madrid and a long day hitting two cities, I had some excellent sleep.

Ends of the earth (or just Europe) #portugal