The love affair has never been quicker than it has been in Sevilla.

After a 7 hour bus ride from cold and rainy Salamanca, the warm Sevilla weather was a very welcome change – and a heat wave from the past few days had just passed as well, leaving the weather quite comfortable. Getting in during the evening, I was pretty ready to do any sort of walking around, so I headed to the river to catch the sunset, passing a few landmarks on the way.

The atmosphere…I don’t know what I can pinpoint about it that makes me say this, but it feels very laidback. It’s not monument-monument-monument like Madrid nor as busy. Every house seems to have balconies and a terrace. Alleys wind in complete disarray. There are few cars to be found, mostly roads shared by pedestrians, bikes, and trams. And people take advantage of this! 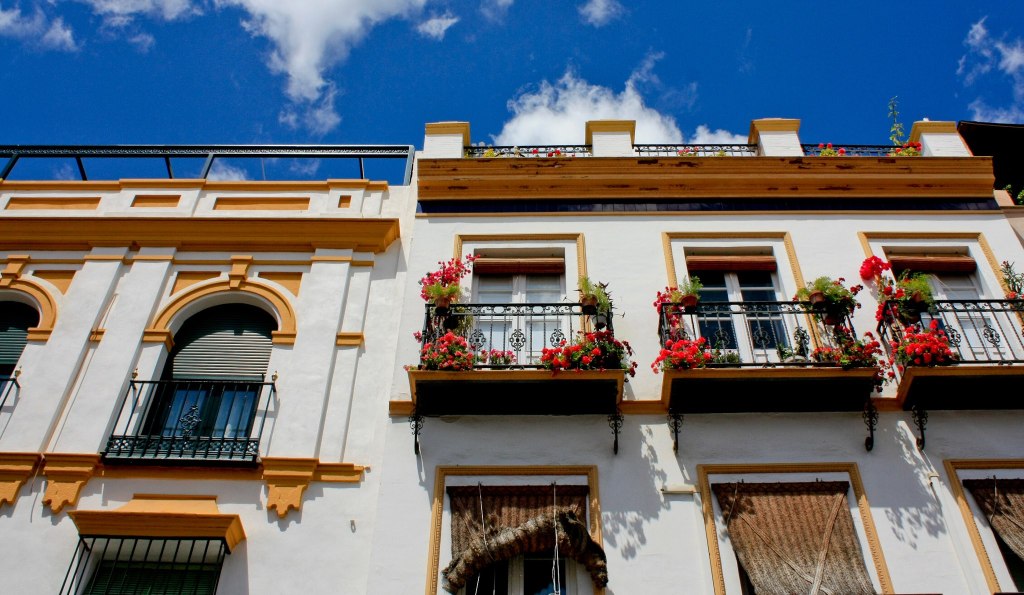 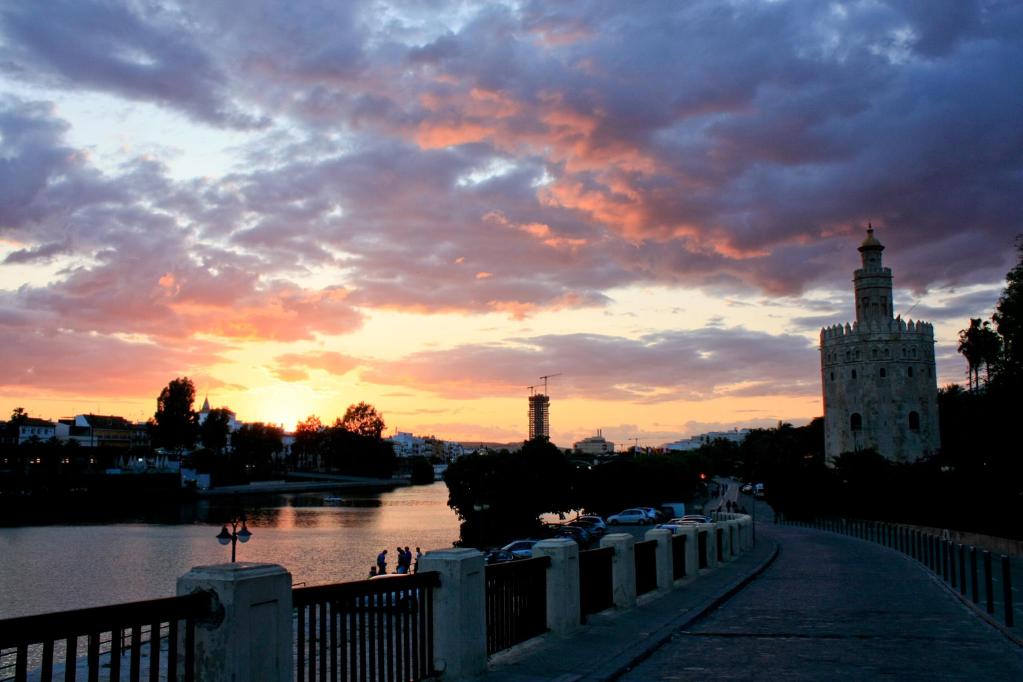 I passed the Torre del Oro just at sunset on my way to Calle Betis and the Triana barrio, both pleasant waterfront areas with life at night – I passed my first religious procession of my stay in Triana.

It was already pretty late, but not satisfied enough, I decided to check out a free flamenco show, hidden in one of those alley-like streets. Within four “blocks” of it, I could tell I wasn’t the only one – there were many other lost tourists looking for the place. I broke out some French (there were some lost tourists from France who seemed to be making better progress than I was, despite me having a map) and we all made it in.

Sure, the show was touristy, but hey, it was free (since I didn’t buy any drinks), there were probably some locals there (it was in a bar), and it was excellent. The laidback feel of the city is there…until the music starts. Then it gets tense. A singer, a guitar player, and a dancer start seated, coordinating complicated rhythms, handclaps, stomps, slaps, snaps…whatever. They go faster and faster, the singer gets raspier and more passionate, the guitar goes into a note-plucking frenzy, the handclaps syncopate in seemingly impossible ways (how do they alternate claps so fast?!), and then all of a sudden…the dancer’s face turns stern, and she abruptly stands up. Her movements are calculated, but the frilly dress is the opposite. She twists and turns as she tap dances and claps out some more rhythms, and the whole thing is awesome in general. 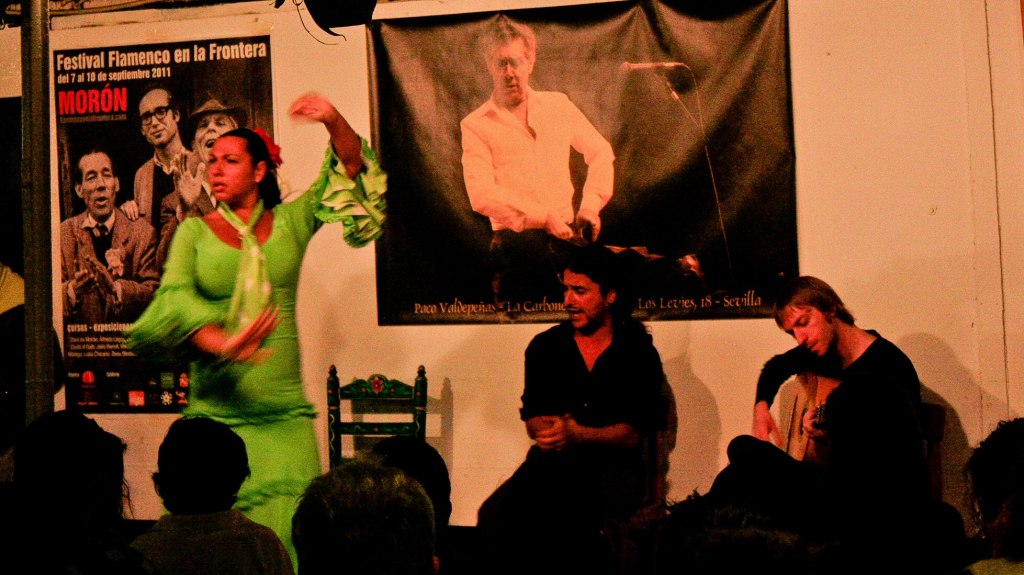 The next morning was a Sunday, and on Silvia’s recommendations was Charco de la Pavas, a Sunday flea market even the hostel receptionist wasn’t quite familiar with – it was off of the map the hostel provided, too. Nonetheless, I found my way there…or at least I thought I did. I asked a local, and he said he was looking for the market too, but it seemed to be missing that day. He pointed me to the parking lot where it was supposed to be.

Not quite believing it myself, I went a checked it out…and sure enough, empty parking lot. But in the distance of this looooong parking lot were a lot of cars… After a whopping 15 minutes of walking towards them, it turns out the market was there all along. And I was walking on the big arterial road right beside it all along – how it wasn’t visible along still baffles me. But then again…most of these places sell counterfeits. Maybe that’s why they chose a giant but not visible place.

The flea market was enormous, and the oddities were…odd. Decades old electronics, flamenco clothing, music and movies, garbage, paintings, and a whole lot of puppies and piglets for some reason. Hmm. Sticking out like a sore thumb as pretty much the only tourist there (really, the only person of Asian descent), a nice man tapped me on my shoulder and warned me to keep an eye on my things. I think there were gypsy families there, at the very least some of the vendors seemed to be.

Not being able to find an exit in this giant market, I ended up walking the entire length of it and then some – took over an hour. My next plan was to hit up the two biggest attractions of Sevilla – the Cathedral and the Alcázar, but the Cathedral was closed and the Alcázar had an enormous lineup. I decided to just wander around…and ended up off the map again. Oops.

Eventually, I got lost enough to get to the Prado de San Sebastián, where a medieval festival was going on. But what I was really looking for was the Parque de Maria Luisa and the Plaza de España, right beside the Prado. The Plaza de España is arguably the most spectacular one I’ve seen so far in Spain – in a completely different style, with Islam-influenced tiling, a giant moat, and utter spaciousness. By the time I had finished wandering it and the park though, the weather made a turn for the worse, and I knew I had to head back to the hostel. 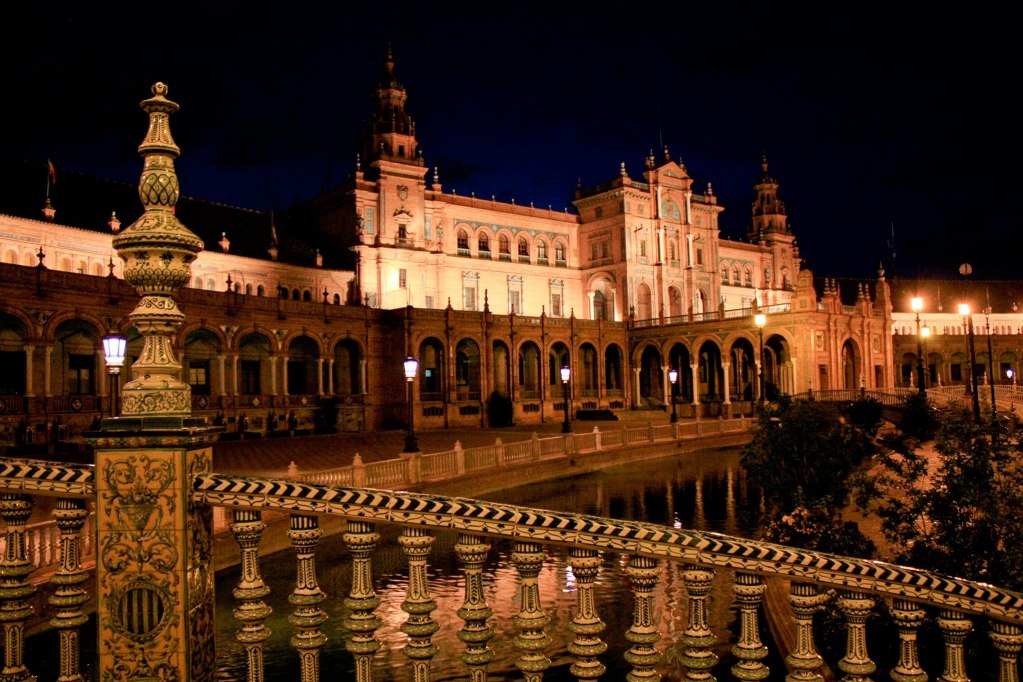 Unfortunately, the hostel was about a 40 minute walk away…and I got soaked. I ducked into a bar and tried out serranito though, a bocadillo of Iberian ham and pork.

After a long rest at the hostel, I felt like heading out for some dinner around 8:30, heading out from the hostel at 7:30. Well…I think I’m my own worst enemy, because I ended up wandering around until 11 before I finally ate. “Too expensive, too touristy, don’t like this one, I might head back to this one later…” The excuses piled up and I ended up walking around pretty much the entire historic center and across the river twice.

But I did end up with a tapa of flamenquin (kind of like a cordon bleu, but in a sausage shape), and some pescaito frito (diced fried fish). Not before passing 6 religious processions in one day! I wonder what exactly the processions mean… There’s always a marching band playing a similar-sounding piece, while a bunch of people carry an altar with a cross on it, and two kids dressed like the pope without a hat swinging incense around. New building dedication? It’s all a little bit too lavish…

I returned to my hostel around 11:30 to find Fernando (Argentina, but living in the Canary Islands) cooking dinner. Ah, the true signs of an Argentinian – eat late and drink mate. He invited me for a second dinner, and it was great to have some company again.

My final day in Sevilla, I spent visiting paid attractions. The Cathedral, the largest one in the world by interior space apparently, wasn’t all that interesting, but its tower, the Giralda, was well worth climbing up. From the top, there was a grand view of Sevilla’s houses, terraces, plazas, and everything. 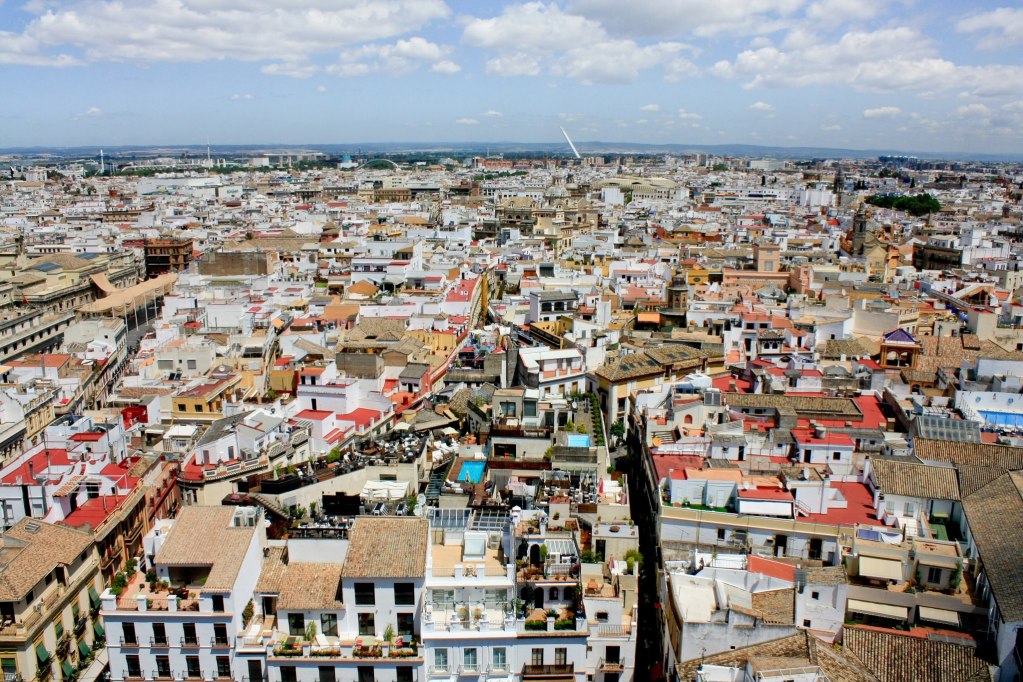 Next was the Alcázar, the former palace. Wow! The palace interior is one thing, with its Islam and Christian influences, but the gardens were enormous, and I ended up spending about two hours in there. Andalucía has a ton of Moorish influence, due to it being the center of an Iberian Arab civilisation centuries ago. Along with the Spanish Christian takeover, this had led to a fusion of a sort I never knew about or imagined. 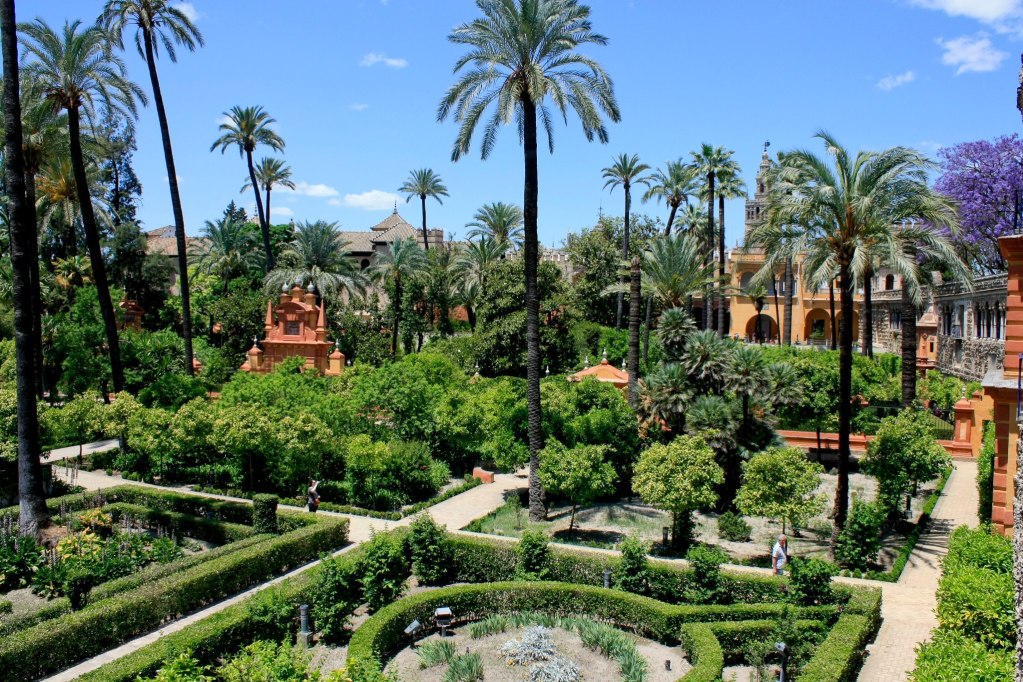 During lunch, I was sitting by myself and was approached by two girls (Happy and Mimi – hello there!) who seemed to have a mutual friend. Small world! 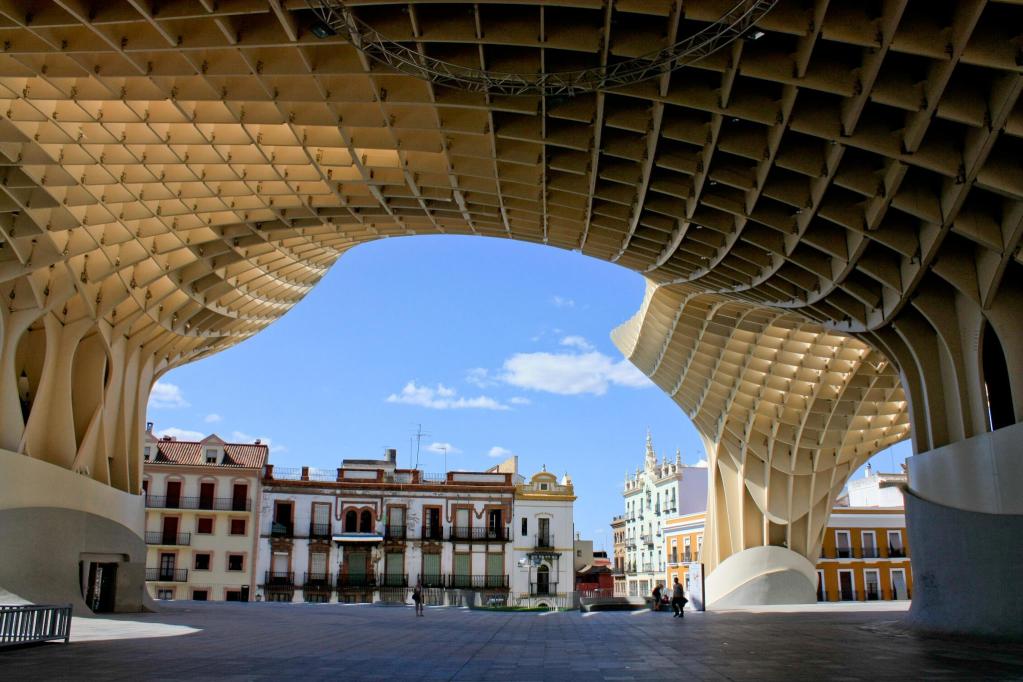 I visited a couple more places – a church, a hospital, and Sevilla’s weird ultra-modern panoramic “tree” – and unlike the past few cities’ attractions, everything gave me more of a feeling of how the city just is. It’s amazing, and I can’t say I’ve ever been so enamored by a city before.

One thought on “Pulse”