Dubrovnik is the one city that’s been on my bucket list for awhile, ever since I saw it featured on the Amazing Race about five years ago.  It’s clearly the big kahuna of Dalmatia, possibly all of Croatia – its old town is a giant fortress set on azure waters.  It’s the most touristy of the lot and full of giant-cruise-ship passengers, but still incredible to walk around.

Also, incredibly hot at this time of year.

But I didn’t bring my swim trunks…

People are goading their friends on.  Kayakers are stopping to watch, and tour boats full of gawkers are passing by.

But it looks so fun!  Hmm…I’ll just go in my underwear…

Yeah, that happened.  I screamed the whole way down and loved it.  It was a much longer scream that I had anticipated though – a much longer way down.

Unfortunately, I ended up with a perforated eardrum, due to the sudden pressure change in the water from the jump.  (I wonder if that happened to any other jumpers, or if I was just the unlucky one.)  Oops!  That’s a week of no swimming while it heals, and a funny echo in my head for the time being. 🙁

I regret nothing!  Not even the four hours I killed waiting for the bus to the hospital and the money I spent on the checkup and meds.  I’d do it again!…with earplugs.

Dubrovnik was heavily bombed by then still-Yugoslavian Serbia-Montenegro in 1991 during the breakup of Yugoslavia, when Croatia declared its independence.  Its location, separated from the rest of Croatia by a Bosnian-Herzegovinian port city (Neum), made it rather difficult to defend.  The damage of the 7-month siege is virtually invisible now and the entire old city looks pristine, a testament to the repairs made.  (Dubrovnik was listed as a UNESCO world heritage site in danger, which probably contributed to the repairs being faithful to tradition.)  Looking from above, a few roofs are discoloured, which is pretty much all you can see.  Maps and photo exhibitions show the extent of the former damage, which is quite alarming in scope.

Despite all the tourism, the atmosphere of the buildings is what I’ve dreamed of.  The old town is shaped a bit like a bowl – low in the middle, but higher on the sides by the wall.  I sat by an alley near one of the edges, where I could see all the terracotta-coloured roofs in the cross section of town in front of me, for what must’ve been an hour, just watching time go by and the swallows dip in and out.

On an aside, I also checked out an exhibition of Steve McCurry’s photos.  He’s the guy that took the famous photo of the Afghan girl that graced Time Magazine a couple decades ago.  The documentary that showed him trying to track down that girl 17 years later was playing, and much more of his photos were on exhibit – they show such a different side of travelling and portraying culture that I only wish I could emulate.  Every face, every stare into the camera just tells so much about the person photographed. 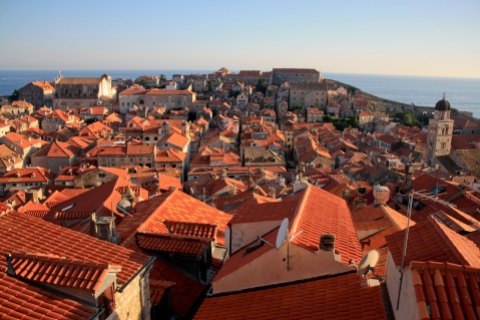 The highlight of Dubrovnik is most definitely walking the castle walls.  You can see the town from all angles, and from the top down.  And if you gaze the other direction, you see what the city is surrounded by (water) and built on (a little islet of cliffs and rocks).  Once I reached the highest point, I sat there and just waited for the sunset.  Dream destination indeed.