Most people head from Dubrovnik to either Mostar, Bosnia-Herzegovina (BiH) or Kotor, Montenegro as one- or two-day side trips.  Looking for something different from the coast, I opted for the former, and Anthony joined me.  Mostar is most famous for its enormous bridge (just look at the pictures) and its scenic old town.  Most tourists come by from Dubrovnik just for an hour or two, snap a few pictures of the bridge, then head back, but we opted to stay for two nights.  When I told the friendly but English-impaired hostel owner in Dubrovnik of my plans, he shook his head.  “Ohhh.  Noooo.  Al-Qaeda.”  Whaa?

Anyway, we headed to Mostar by bus, which took about 4 hours, multiple border crossings (Croatia has the entire coast except for this little 16 km stretch that belongs to BiH) no passport stamps, and some incredible scenery.  The Dalmatian coast is stunning, but heading inland into BiH, the scenery turns into green green green mountains and settlements scattered around valleys.  The style of the houses changed a lot more too, and things were admittedly a little more run-down, in stark contrast to all the resorts we were driving past in Croatia.

We were picked up by our friendly hostel owner, Taso, who gave us a quick runthrough of things to see.  The bridge, obviously, but also the old town, the mosques, and curiously, a street riddled with bullet holes.  Also up on the wall: a picture of the hostel (Taso’s house) after the war.

I certainly knew of the Bosnian war of the early 1990s, but I feel a bit ashamed that I didn’t know much, if anything really – here’s what I’ve kind of picked up.  Upon the breakup of Yugoslavia (which also led to fighting in Dubrovnik), the remaining Yugoslavia (Serbia-Montenegro, now separate countries) fought to grab land from the newly-independent Bosnia-Herzegovina.  BiH is composed of three ethnic groups: Bosnian Croats, Bosnian Serbs, and Bosniaks (Muslims).  This I’m not sure about, but the fighting somehow ended up on ethnic lines, and some Serbian forces led by general Ratko Mladic (who is currently on trial) executed a genocide on the Bosniaks, the most famous of which is Srebrenica, much further north in BiH than I’m going.  Thousands were killed and there was a big coverup, involving anonymous burial of bodies in mass graves and mixing of human remains. 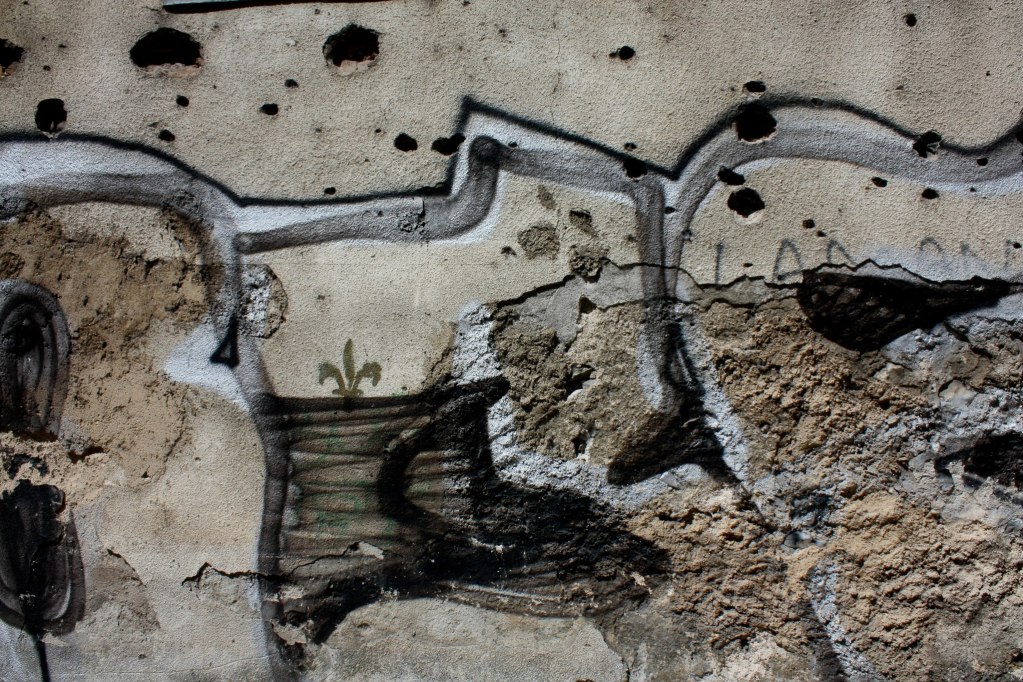 Anyway, though the genocides are horrifying, this isn’t so relevant for Mostar.  The war led to gunfights and bombings, and one prominent street in Mostar, Bulevar, was the dividing line in some of the fighting.  We walked around and surveyed the buildings – though many new buildings have come up, many apartment buildings on the street are covered in bullet holes from top to bottom…and they are still inhabited.  Elsewhere around town, some brand new stores are built in war-torn buildings: the insides are all shiny, the outsides are full of holes and the building may have lost the floors above.  Abandoned, crumbling buildings still stand on the streets, some with big “DANGER” signs.  I wonder if they’ve been left there for memorial, or whether people just don’t want to deal with the cleanup…  There is also apparently racist or hate graffiti from the war left on buildings around town, but I can’t read any Bosnian; there is definitely a lot of graffiti though.

The famous bridge was also destroyed in the war, only fixed again in 2004.  Everywhere you look, you see some evidence of war.  I don’t mean to denigrate the significance of any other terrible wars, but this affected me a lot more than all the other war history I’ve seen while travelling – this war was less than 20 years ago, within my lifetime.  Every local on the street my age or older has been affected by the war, and all probably have some stories to tell if you get them going.  And I wonder if anyone learned from all the atrocities in the two world wars or the Holocaust, that another “ethnic cleansing” genocide and senseless fighting could happen in just recent history!

Heavy stuff aside now.  Mostar is small, but very peaceful.  The people we dealt with were all extremely friendly.  The food was delicious – we ended up eating twice at a restaurant that Taso recommended to us, which served very hearty Bosnian fare and gave us free schnapps (43%, yikes, that burns!).  Everything is also super cheap, less than half the price of Croatia – we ate like kings for 5€ each, and had a private twin room with AC and a TV for 11€ each!  And yes, the Old Bridge is certainly a marvel – I do wish that we had the time to stick around and see the occasional divers who jump into the river waaaaaay below, or that we were there at the end of July for the diving competition.

On our second day, we opted to join Taso’s tour of Herzegovina – a lovely way to see some public transportation-inaccessible places.  (An aside, unless someone can correct me: Bosnia and Herzegovina refer to two geographical regions that form a rather inseparable nation, not like how Serbia and Montenegro are more like two nations of two different peoples who just stuck together for awhile.)  But first, he drove us to try a traditional breakfast food – delicious but I still can’t remember the name!  It’s this pastry pie (could be burek if it’s filled with meat), baked in a pan covered on top with a lid loaded with hot coals.  Wonderful texture.

Our first real stop was Blagaj, a town most famous for its natural spring river, mini-cave, and Dervish house.  The water was cold, blue, and tasted amazing, and we took a boat into the rather tiny but still interesting cave.  Apparently the water source comes from under the cave at a rate of 4500 L per second! 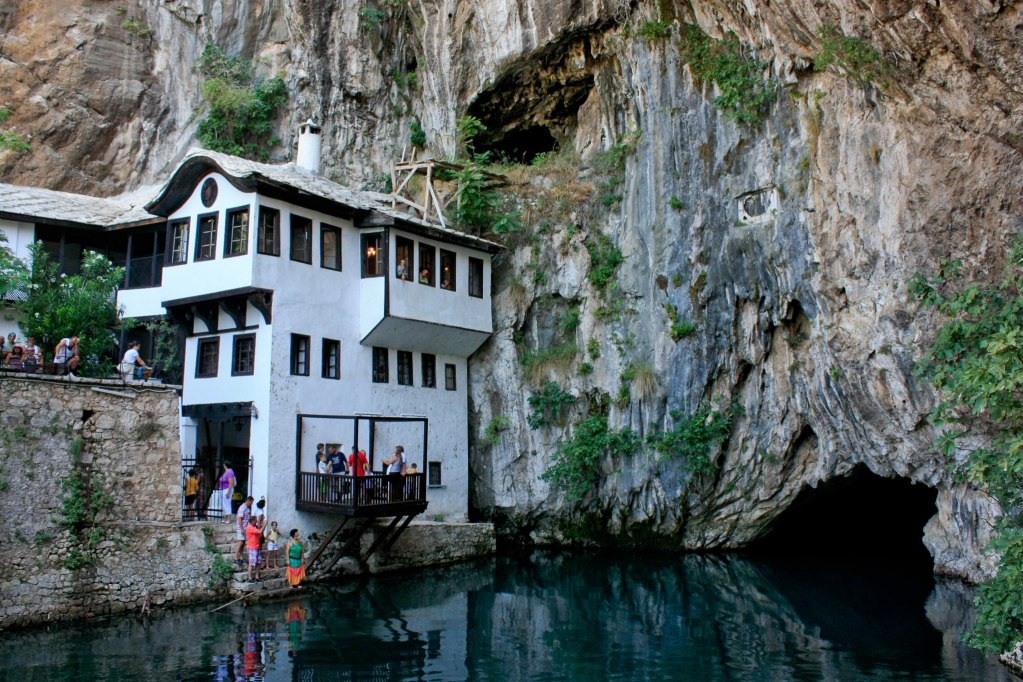 Next was Međugorje, a formerly tiny and nondescript village that has exploded in tourism since the mid-1980s…due to an alleged apparition of the Virgin Mary.  Though not confirmed by the Vatican, millions of Catholic tourists come by every year for a pilgrimage.  This town has a population of just a few thousand, yet there are enough hotel rooms for 80,000!  Every store sells Catholic paraphernalia – Virgin Mary stuff, “I Love Jesus” t-shirts, some downright ridiculous stuff…cigarettes?  Huh?

Third was the Kravice waterfalls.  So pretty!  I’ll leave the description to the pictures.  Despite my doctor’s orders not to swim, I did anyway, keeping my head out of the water – well, the point is just to not get my ear wet, right? 🙂  Anthony and I were trying to get some photos sitting in the falls, and the locals were only happy to help. 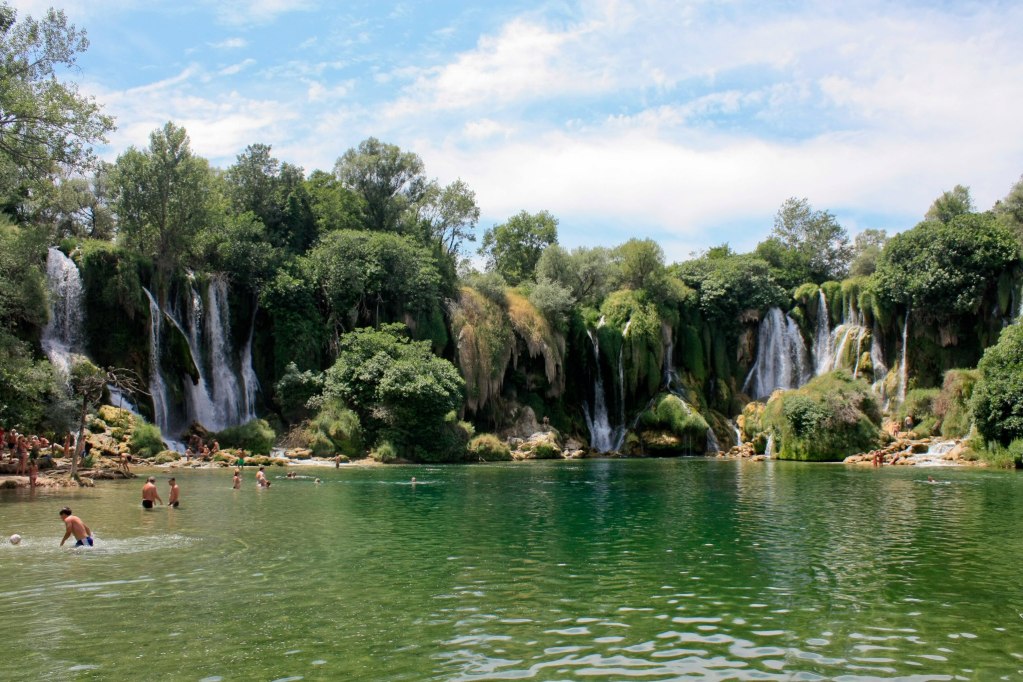 The last stop, Počitelj, was probably my favourite – a formerly Ottoman-Turk town/fortress that was later abandoned in the 1500s, it never fell to the enemy.  The fortress was set on a hill with a view of the river below, and walking around was quiet and so atmospheric.  The locals selling fruit were also super friendly, and that fruit was delicious…  Taso picked some figs from some random person’s tree (without asking) and gave them to us – wow, those were amazing. 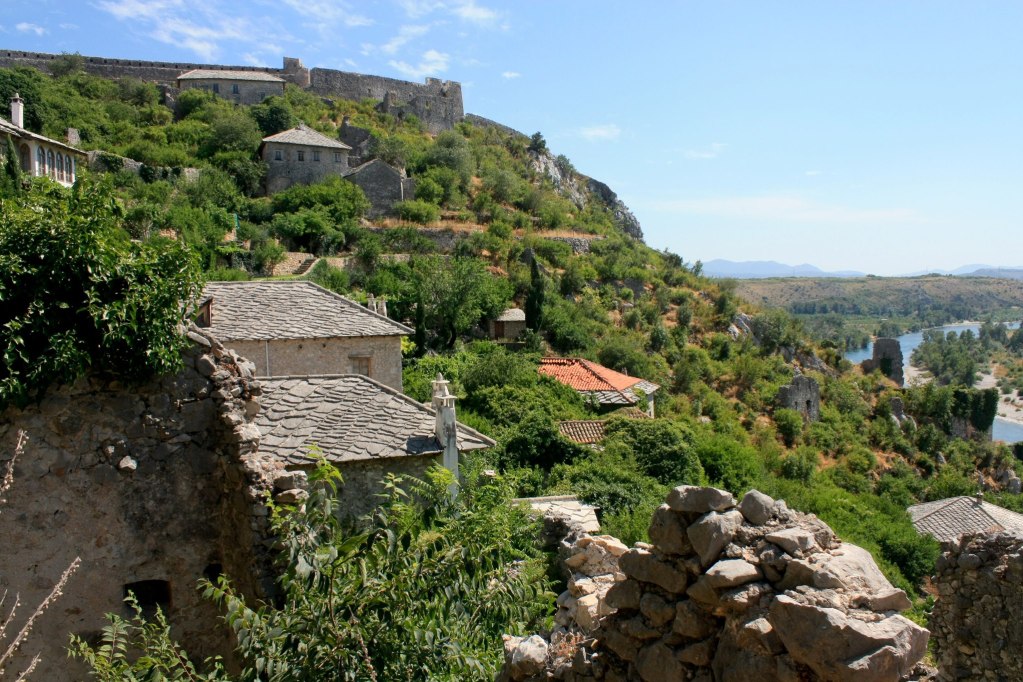 We had one last evening back in Mostar after the long tour, which we spent wandering around town randomly with Lyle and Evelyn from Brisbane, before another meal at that awesome restaurant.

I’d really love to head to Sarajevo, but I have no time on this trip – I’ve already got my flight booked to Berlin!  I’ll definitely be coming back to BiH someday though – I’ve seen Herzegovina, but I’ve yet to actually see any of Bosnia!