Rather than taking the same way back we came to keep the stamp out of my passport (Bernhard didn’t care anymore), we took the risk and crossed from Aqaba, Jordan to Eilat, Israel.  Despite having no entry stamp into Jordan and no form with the stamp either, they let us through – it just took some explanation and a big smile.  Israel, as usual, offered the option to stamp on a piece of paper; this time I got the form, which certainly makes leaving the country easier.  (I wonder what Israelis think of this whole security thing.  We were told, “You look nervous!” when we approached, despite being far from it – intimidation factor?  We were questioned at length about how we knew each other, what exactly we were doing in Singapore, and a ton of personal details unrelated to the trip.  Yet going through the bag check, I had an agent who was cracking jokes.  But again, going through it all with a smile always works.)

Realising that in all of Israel, we had only seen the ethnically and religiously divided Jerusalem, Bernhard and I decided to head to Tel Aviv to catch a better glimpse of Israeli life.  We admittedly had low expectations at first – Tel Aviv has an international reputation of being a hard-partying city, with its big beach and nightlife – but came away pleasantly surprised and extremely positive.

Tel Aviv is a little gritty in places, but ultra-modern in others.  Our hostel was located on a pedestrian street that happened to be holding a handicrafts market that day.  The buildings on that street are pretty…but some of them were quite run down at the same time.  I think that describes pretty well the mix of architecture you’d find all around the city.  As for the handicrafts market, it’s definitely one of the most creative ones I’ve encountered – plenty of artsy kitsch, but also some cute useful stuff for once. 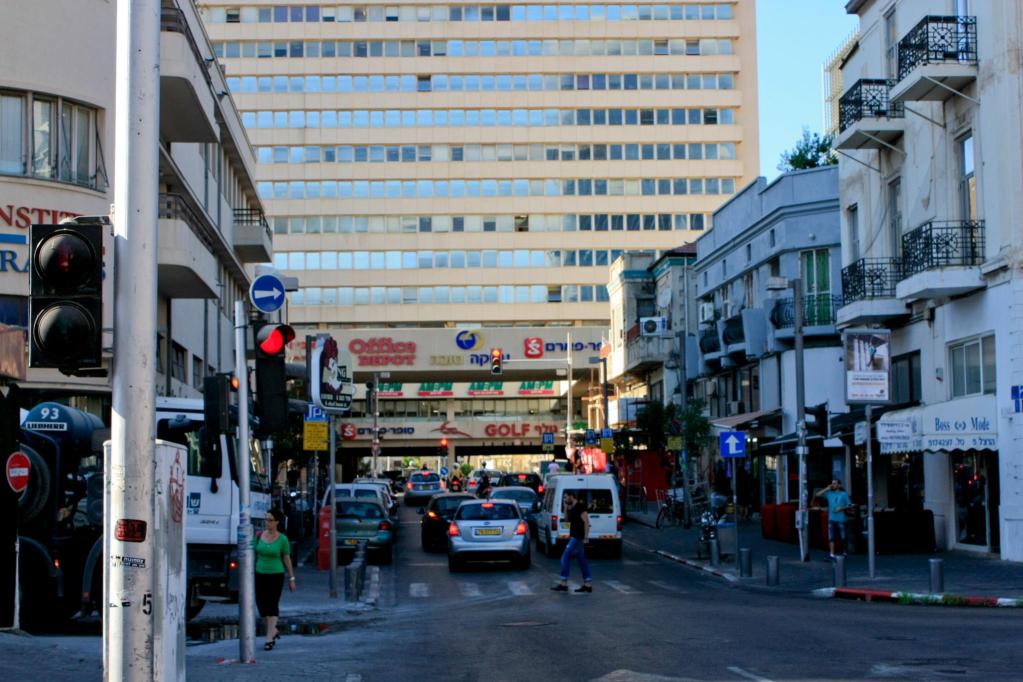 We headed through the crowded Carmel Market in the Yemenite Quarter (didn’t really seem that way to me) to get to the beach.  Felt a little like Southeast Asia again, with its dizzying array of cheap fruit, cheap clothes with cheap humour, and spices – add a falafel stand here and there and you’re reminded it’s Israel. 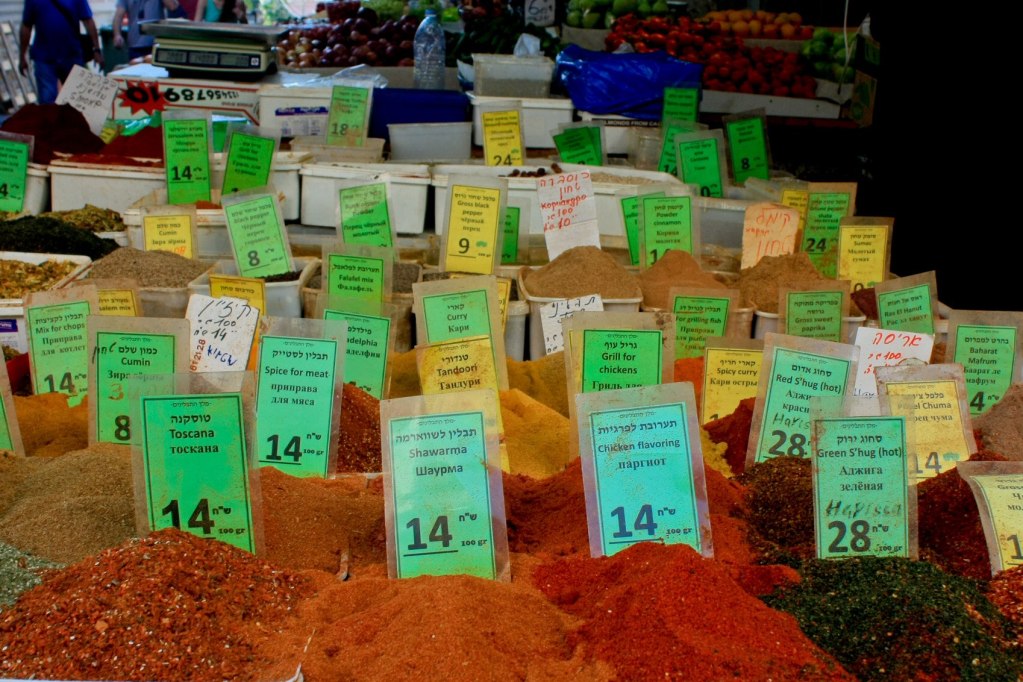 The beach is enormous.  If it weren’t for my still-heavily-bandaged finger, I’d have been tempted to just chill out there.  Giant promenade, but also giant resorty hotels lining the beachfront that didn’t detract.  That Mediterranean water, so clear and inviting, and the heat so stifling until the seabreeze hits you…but alas, next time. 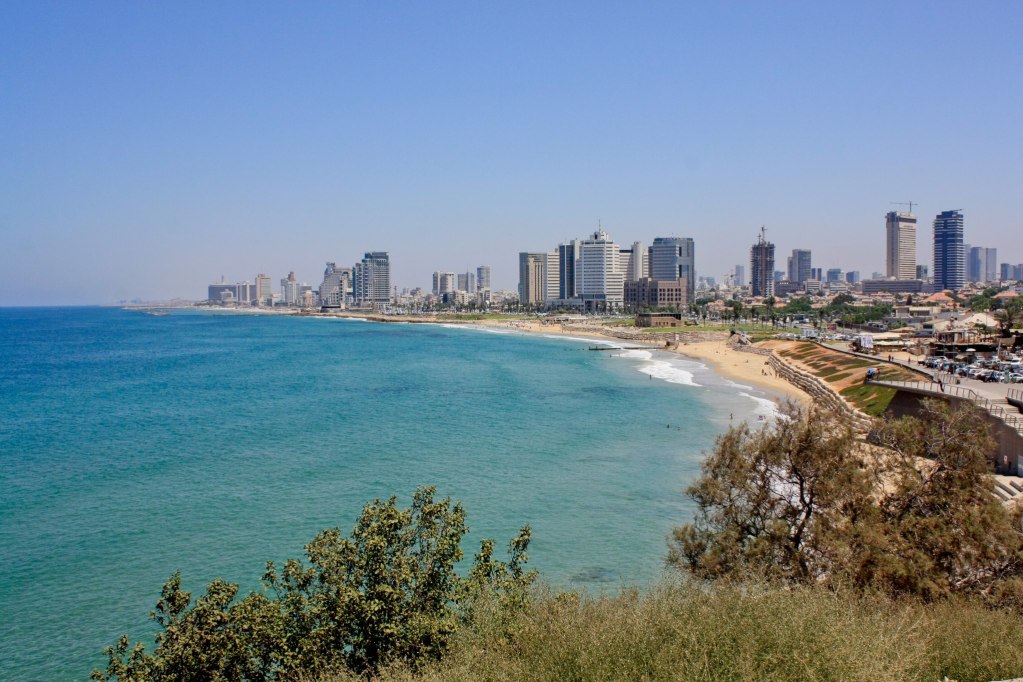 There was a lot that we didn’t have time for – Tel Aviv has a lot more high culture than I expected, with some prestigious art museums, galleries, and cool events.  I settled for walking around Scheinken St. (the shopping area…really just for the air conditioning coming out of the open doors) and Dizengoff Square with its giant malls.  Heard about some area full of Bauhaus architecture (of which I was first acquainted with in Stuttgart), but after walking there twice, didn’t see anything.  Guess I need a better eye?  The city is also every bit as alive at night as it is during the day – but I was never out that late to experience it all.

But it’s great to go to a place with great cheap food everywhere as well.  Whatever kinda food you want, it’s around.  Yes, that meal of fresh homemade pasta was totally worth it after months of sticking it out with streetside stalls and cheap local food. 😛  But also, wherever I can get a cheap delicious shakshuka is fine by me.
The city seems a world away from Jerusalem – it’s quite clearly liberal- and secular-dominated and refreshingly free from any signs of conflict or tension.  It’s not to say that there isn’t any – there have been suicide bombings here in the recent past.  But wandering around now, you pretty much can’t tell.

On our second day, accompanied by Maxi (Argentina) from our hostel, Bernhard and I headed to the neighbouring city of Jaffa (Yafo).  Where Tel Aviv is only about 100 years old, Jaffa dates all the way back thousands of years, possibly even founded by one of biblical Noah’s sons (Japheth).  But so fast has Tel Aviv grown that Jaffa’s just been absorbed into it by now.

Jaffa’s old town is really beautiful – kinda reminded me of Croatia.  Fortress-like walled city (though the walls are now long gone since residents stole the rocks for themselves to build their houses), built on a hill, overlooking the Mediterranean…  We went to the museum, which was a bit expensive but worth it – 4D movie!  Heh.

Jaffa is the setting for several legends and biblical stories.  One, Andromeda’s rock – where the Greek legend states that she was sacrificed to calm a raging sea monster, but she was saved by Perseus.  Two, the port – where Jonah left to somewhere else when God called him to preach in Nineveh (and later, where he was swallowed by a big fish or whale).  Three, Simon the Tanner’s house – Peter slept on the roof and an angel appeared to him in a dream, declaring all animals okay to eat (instead of following kosher) and initiating the spread of Christianity to the rest of the non-Jewish world.  There’s more stuff that I can’t remember.

Tel Aviv was a short stop, but one that left me eager to return someday.  (And there’s so much more of Israel, especially in the north, that I’d now like to see.)  If only it weren’t so complicated to get in and out of its airport!  I took 2.5 hours, from the moment I got to the airport to when I sat down at the gate!  You go through security before you even check in – and they mean business, as they question you at extreme length as usual then go through each and every person’s bag and its contents item by item!  That’s about 10 minutes per person, not counting the lining up part…  Then you check in, go through security again…oi!  Hmm, maybe if I return I’ll just fly in and out of Jordan and take a bus across the border…I think that could be faster!