Another day, another trip on the backseat, another badminton errand to run. It was a long ride from Cotonou to Lokossa, back on the dusty construction-filled road towards Lomé, needing multiple literally-on-the-road stops to fill up on gasoline. (Gas stations are few to none; vendors sell gasoline in bottles on the side of the road, imported illegally from neighbouring Nigeria.) Traffic is anything-goes: separated local traffic lanes (like “collectors lanes” on the 401 in Toronto) run adjacent to the fast lanes in the middle, but with the roads frequently blocked due to construction, everyone just ends up driving anywhere on the dirt, on sand, through fields…whatever means necessary to get to the next surfaced road. Motorbike traffic u-turns at will, driving up and over a median to go to the side of opposite traffic. Chaos, but it seems to work better than Ghana.

The night before and all through the morning, before heading on the road Aubin and Miguelle’s mom were warning me about “la poussière”. Didn’t know what that meant until I was covered in a layer of it, skin turned ashen grey, nasal passages burning. I let Aubin keep the helmet he brought to protect me from it — he was driving, he needed it more. 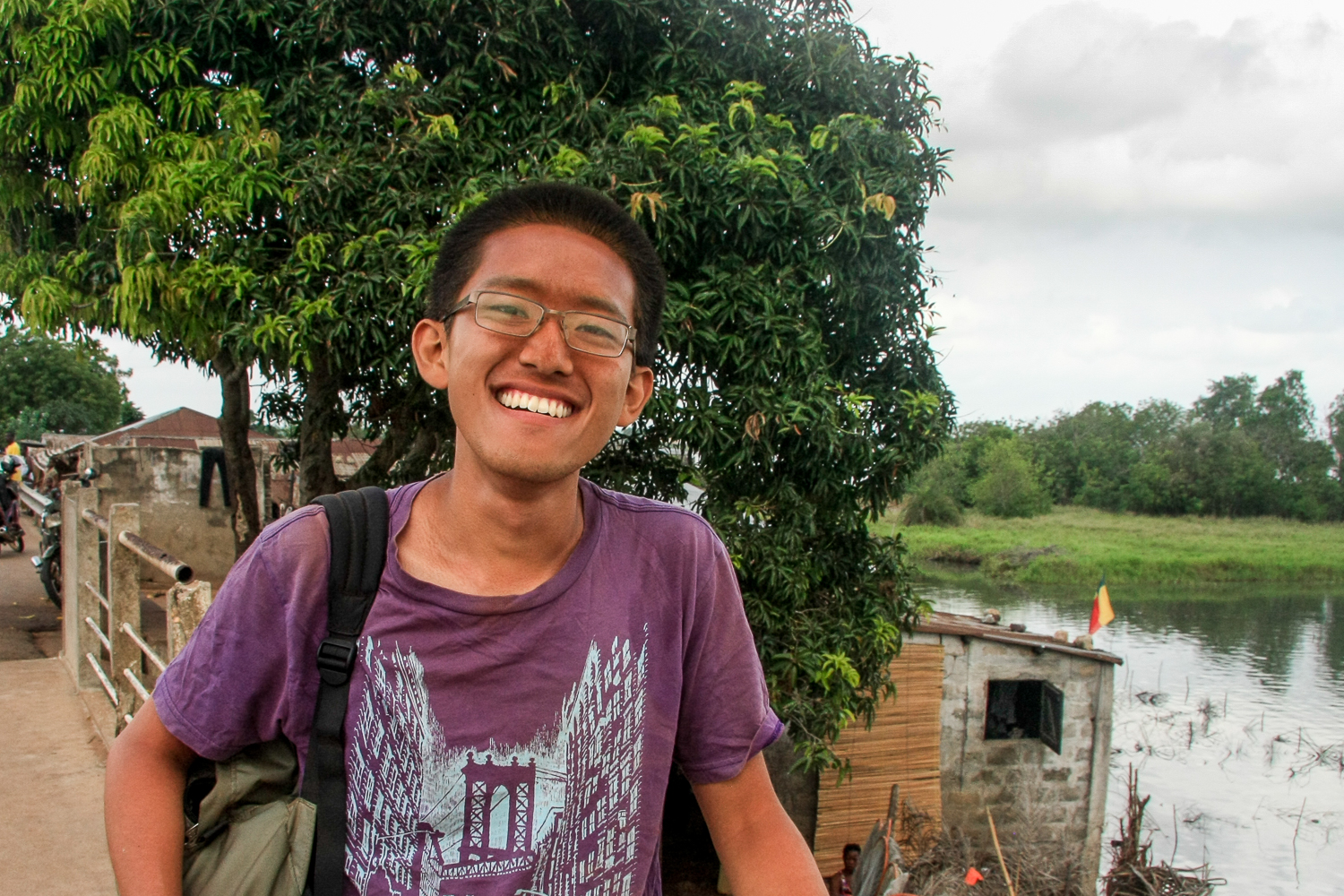 There really wasn’t much reason to go to Lokossa, a three hour ride from Cotonou, but I went along with it anyway without objections. Turns out we were delivering badminton birdies to Aubin’s friend. Can’t leave without a match first! I lost… badly. Like my French, just needs a bit more warm up, that’s all… Two hours of badminton-related discussion about the lack of plastic birdies and lack of international tournaments with West African representation and an hour of actual badminton playing later, I got a quick 10 minute tour of Lokossa, so named due to the legend of a hunter who chased an animal who turned out to be a deity, hunter becomes the hunted and hides under an iroko tree (iroko > Irokosa > Lokossa). Whoo. Too bad the tree’s gone. 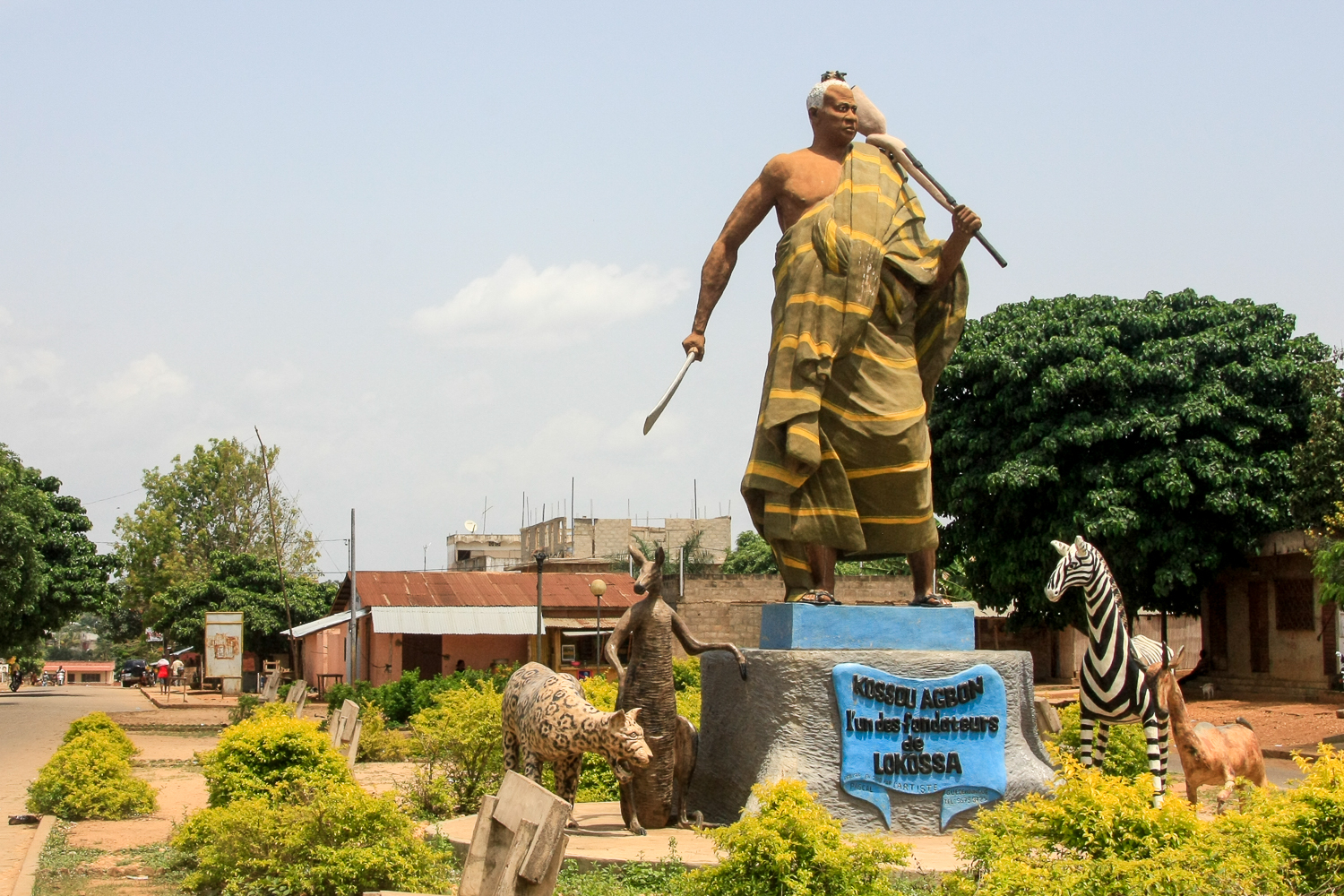 In mid-afternoon, we set out on the road back to reach the city of Ouidah, stopping occasionally for a drink or a view of Lac Ahémé. Well…and for a flat tire. Like gasoline stops, tire-fixer stops also seem to be everywhere on the road side. Lucky us, except that tire wasn’t repaired too well… (It flattened again the next day.) 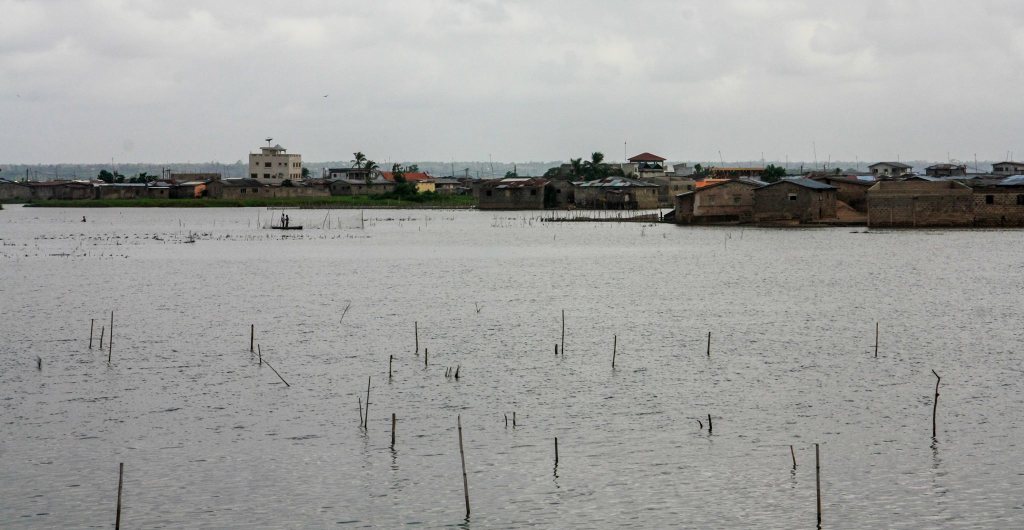 After arriving in Ouidah, I made a quick visit to the Temple des Pythons — exactly as it sounds. Pythons are revered and worshipped in Ouidah, after a fugitive king ran into a forest in the area and pythons fended off his would-be captors. And so, a temple was created in dedication of the python god Dangbé, whom people will approach for a variety of reasons that I couldn’t catch entirely in French. Usually women — for births or something about menopause. In any case, the snakes occasionally roam free around town, and locals are happy to let them in or bring them back to the temple. They’re well-fed and entirely docile… which meant the guide happily came out carrying a python and draped it on my neck. Not as scary as it initially seemed — I grew a bit attached to my friendly python! Plenty of other ones slithering around in one of the temple’s huts. The whole thing was kitschy and touristy, yes, but I don’t doubt that the temple’s still in active use. 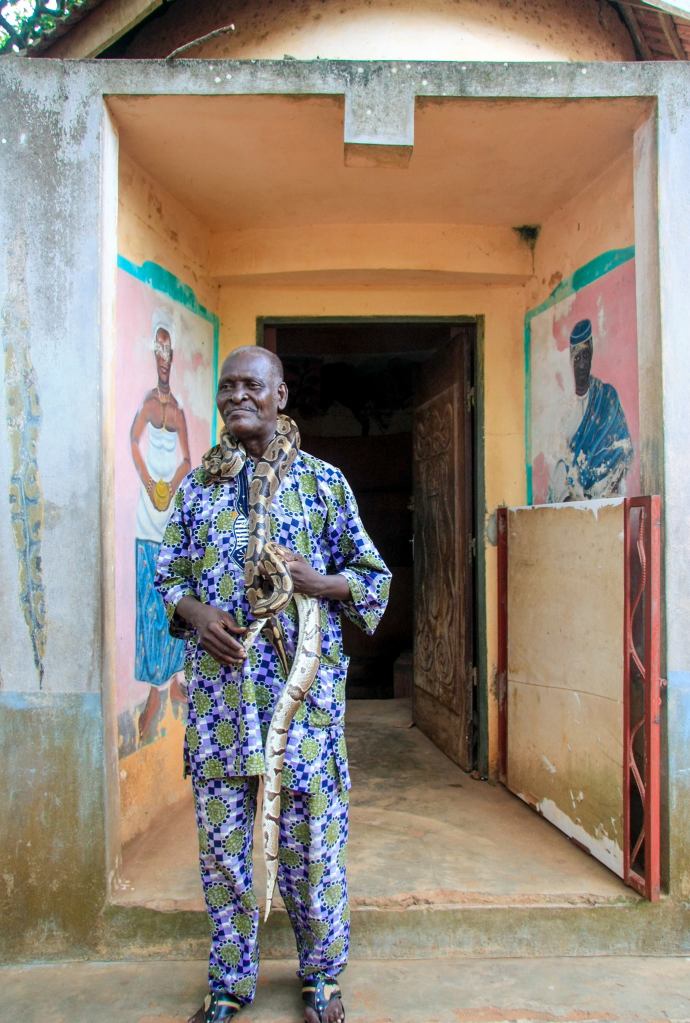 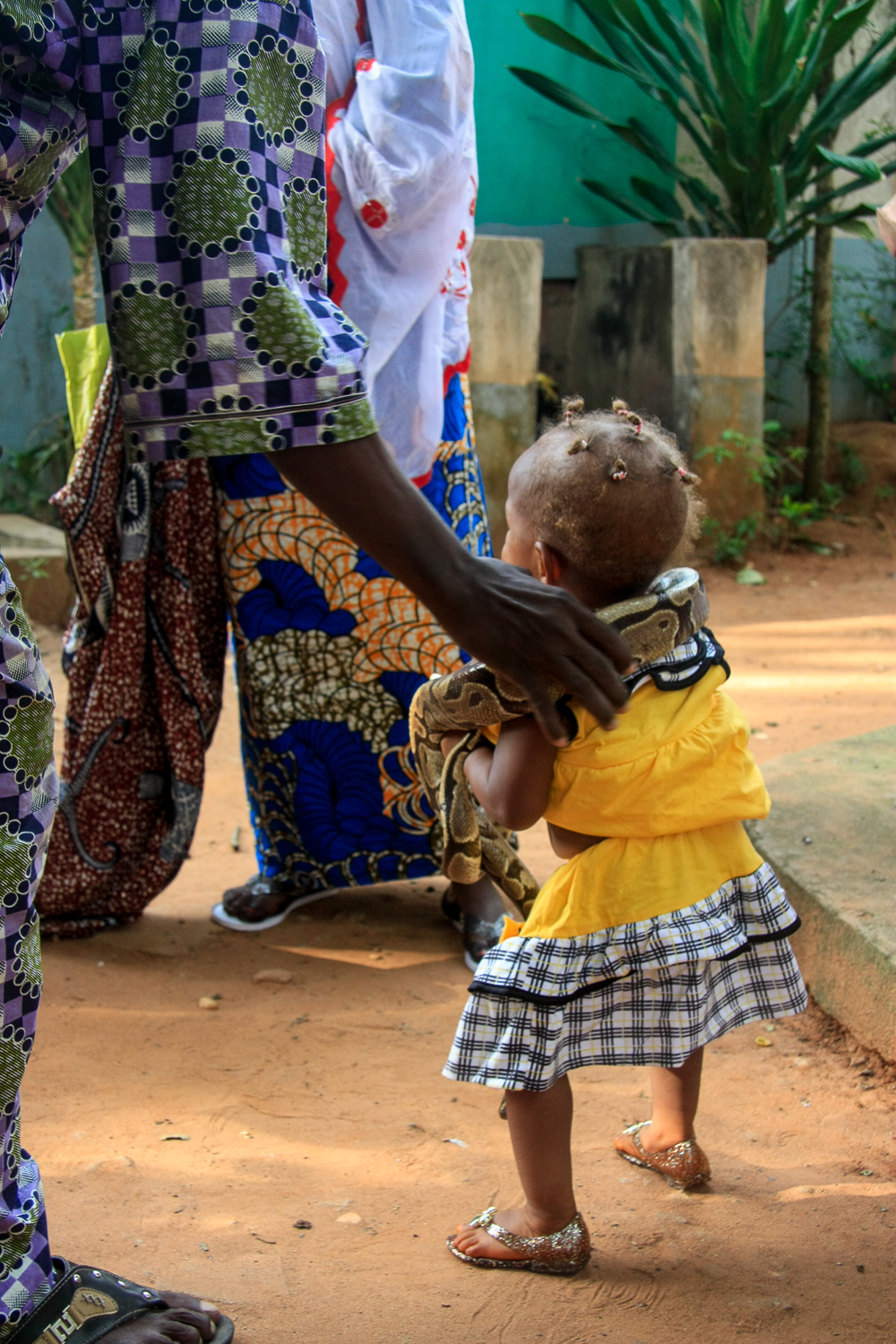 Having absolutely no clue where we were going next, I was surprised when Aubin stopped the bike in front of a loud and boisterous ceremony surrounded by a large crowd. On one side, people beating drums. Dancers began to approach from an open street that I couldn’t see through the crowd, dressed in extremely elaborate costumes of patterns, tassles, beads, and bright colours, with capes each adorned with a large animal design on the back, and with masks — almost coverings — that completely obscured the face, rendering eyes and nose and mouth completely shapeless and invisible. Some masks had feathers, some had “hair”, some had beaks, yet none resembled a specific animal, more like something mythic. Regardless, I got the sense that the costumes were meant to completely shield one from being identified; not even a sliver of skin nor hands nor feet were visible either.

Ouidah’s well-known for being a voodoo town (hence the python temple), but my immediate assumption was incorrect — this was something entirely unrelated. Too shy to break through the crowd of tall onlookers or attempt to take more than a quick picture or two to avoid possibly offending people (despite Aubin’s insistence to the contrary), I opted to just mostly watch. With no one to explain beyond the words “revenant” (the celebration itself), “egungun” (costume), and “Yoruba du Nigeria”, I can only make my best guess to what was going on! Why it was happening specifically on that Sunday, I don’t know. 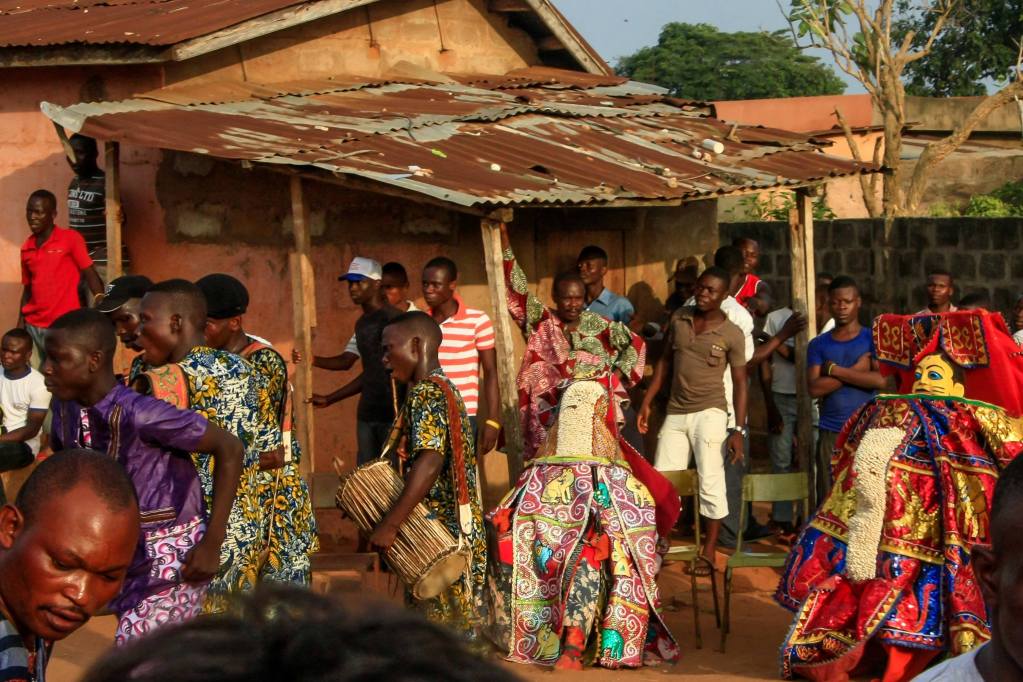 One or two dancers would come and toy around with the crowd, swinging long brushes on the heads of willing crowd members, dancing, spinning round and round, occasionally raising their capes, hiding their figures but dazzling the crowd with their patterns while spinning. Once in awhile, another dancer would come in from another side. Playing dramatic, they would swoop in and out at the other dancers, chasing them away all around the circle. Then… the lone dancer would swoop in towards the crowd, though never aggressively. Clearly it was bad luck to be touched by one of these dancers, because the whole crowd would go into stampede mode and move away — I nearly got crushed a few times! To avoid bad luck (the “evil dancer”) or to bring good luck (the “good dancers” with the brushes), non-costumed members of the performing troupe would accept money — maybe a 500 franc (>$1) note here and there. The whole ordeal had an air of story and dramatic flourish to it. Indeed, the barest of web research tells me that it’s a ceremony of spirits and ancestor worship.

After watching for about 15 minutes, we left and Aubin zipped quickly through the Route des Esclaves (Slave Road), a 4 km road to the coast. We began at Chacha place at “l’arbre de l’oubli” (the tree of forgetfulness), planted by King Agadja of the Dan-Homey empire (hence Benin’s former name Dahomey circa 1970s), who believed the tree had magical powers and would force the slaves he sold to walk around it — chained — several times, symbolically forgetting their past lives before walking the remaining kilometres to their coast, their fate, and their new lives. 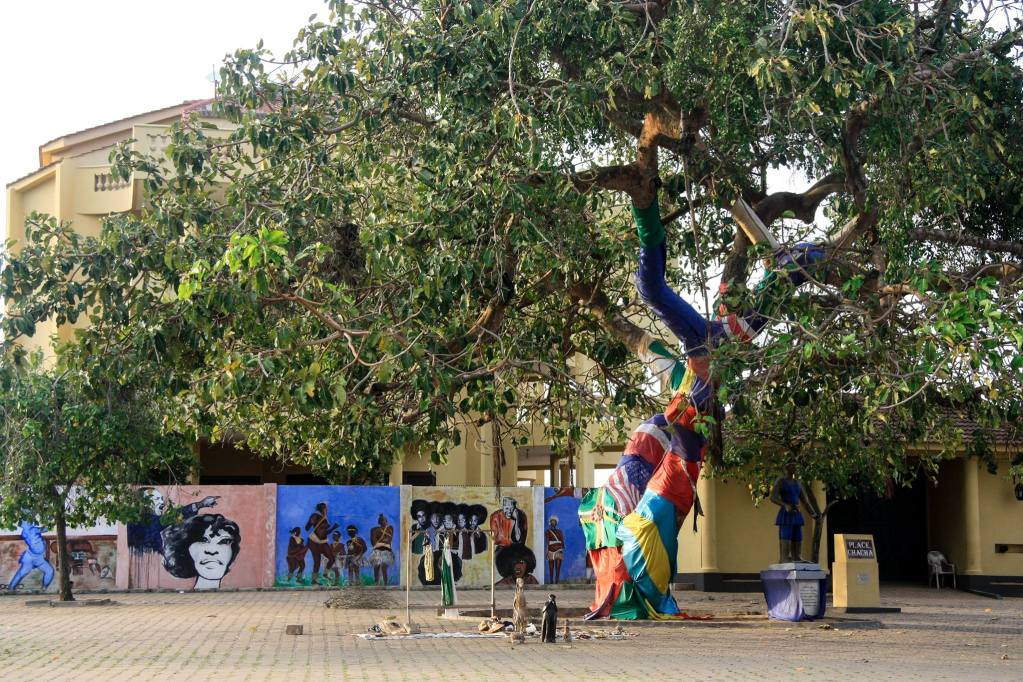 There are few markers, if any more, beyond voodoo fetish statues on the route. We passed by a slavery memorial, but with the sun going down (a long way back to Cotonou) and the memories from the castles in Cape Coast and Elmina still fresh in my mind, I opted to skip. Ouidah was one of the largest ports of slavery in West Africa. The story is similar but equally horrifying — nearly 1 million individuals were shipped out from here. 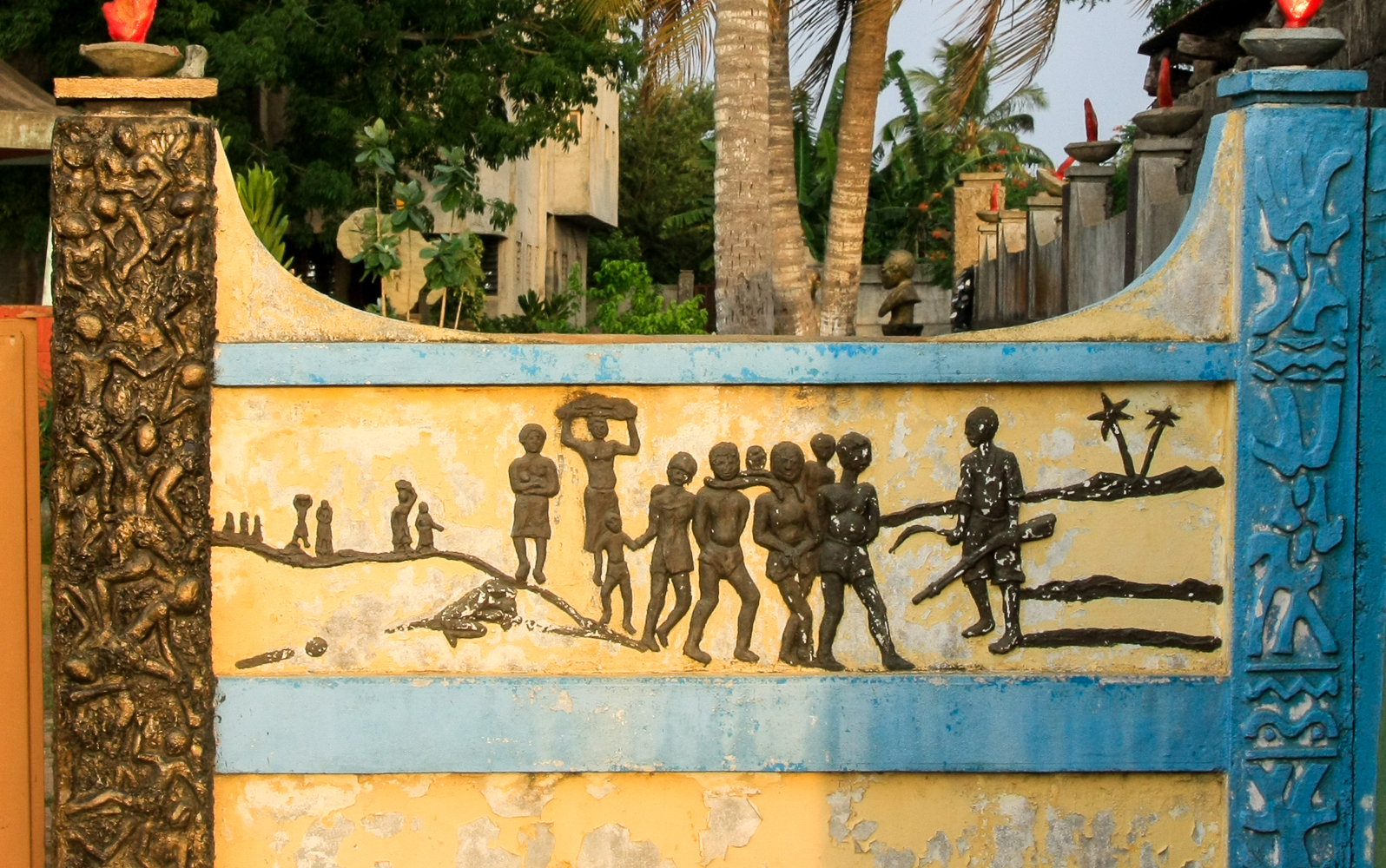 At the end of the route is a beautiful beach. You’d never know its past by looking at it, if you didn’t see the Porte du Non-Retour (Door of No Return) memorial constructed there. 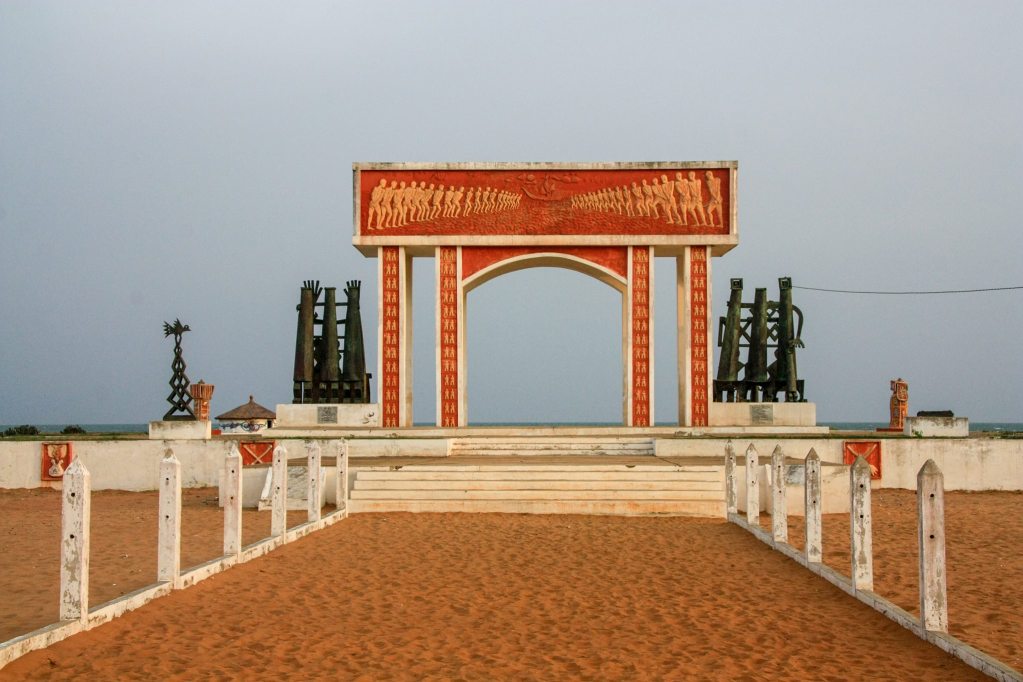 It was along that beautiful beach that we returned to Cotonou, along the Route des Pêches (Fishermen’s Road). Dotted with little fishing villages (replete with kids yell-singing the “yovo” song as we zipped past), surrounded by palm trees, and with the sunset behind us, it was a spectacular way to end the day — albeit “doucement”, as we were driving through sand on a bumpy road in the dark with a fragile tire and little gasoline left. (“Doucement!” I yelled as we hit a particularly nasty bump. Aubin was bewildered as to how I picked up that word, given its heavy local use. Me too — I learned it from a Feist song.) Aubin pointed to a large piece of property available for 1.75 million francs (<$3700), surrounded by lush vegetation and facing the beach. I can't say I'm not slightly tempted to become a property owner… The Route des Pêches is clearly going to become a hot commodity soon, there are signs of Chinese investment for road development. I certainly hope it won't ruin the vibe. 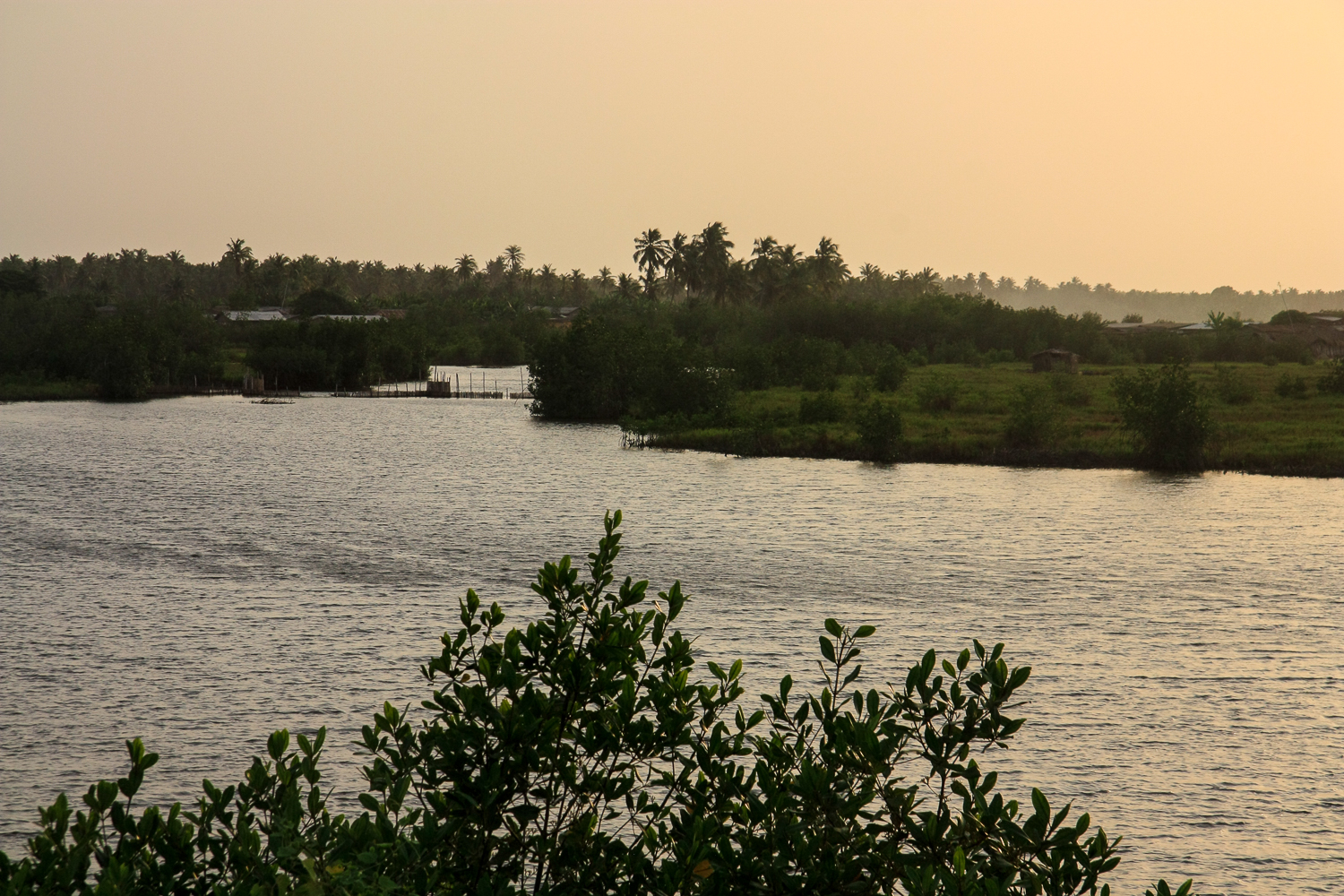 With Aubin unable to take me around the next day but Kesley willing to accompany me, it was perfect timing to take an offer from Firmin’s brother, Quirin, to head to Abomey in his car and stay a night. Plus, we could meet up with Miguelle, as she left for a one-month work placement in Abomey. Except… well… car wasn’t working. We headed to Miguelle’s house and waited all day there, where her mother works a small shopfront at the front door of the family compound.

And you know what? It’s not boring. I’ve never thought about how life is for the millions of shop owners around West Africa. You’re sitting there all day, hopefully in the shade if you’re lucky (and we were). How do you pass the time? Gossip. Well, all the juiciest gossip goes on in Fon, but hey, there’s more than a few scraps of French — and from what I remember/understood, more than a few comments about my hair. Friends and family and familiar faces come and go when so many people work in informal commerce. The onion selling lady and the coconut selling lady and the vegetable selling lady might stop by, take a break from carrying that giant load on their heads, and chat. Someone from inside the house might wake up from their slumber, and join us outside. Someone might come back with snacks. It’s never a lonely business. But you know… I never did understand how it was profitable though — all day, I saw maybe a couple kids come for candy, someone for a packet of laundry detergent, and someone for some tiny little thing. Can’t have been more than 1000 francs in total. Hmm. Still, that didn’t seem to deter Maman at all. Gossip away.

One thought on “Doucement”