The problem was one I knew would happen, but there wasn’t anything I could do about it anyway.

Through my friend Mathieu (shoutout!), who I met way back when in Morocco, I was connected with his Beninois friend Aubin. Trouble was… French only. Calling him from Lomé the day before didn’t go so well, considering my still-halting French, poor call reception, and having to ask him to slow down and repeat every sentence three times and still not understanding. Calling him as soon as I entered Benin turned out to be fruitless since my Togolese SIM card wouldn’t let me roam. And so, when I finally approached Dantokpa Market, I borrowed the taxi driver’s phone, and managed to figure out that Aubin was already at the market somewhere. Unable to describe where we were, I let the taxi driver take over the phone. I imagine it went something like this, because he literally said one sentence:

We stood there for about 20 minutes. And then he left. And so, losing the “we’re in the white car” part of this extremely vague description of being next to one pharmacy out of dozens (he could’ve provided a name…) in a densely-packed market spanning several city blocks (that part I didn’t know until after, I was at the very edge) made it virtually impossible for Aubin to find me. Oh yeah, I also didn’t know what he looked like, nor did he know me (although… come on, I’m a yovo, I stick out like a sore thumb), and I didn’t have a working phone.

Take that in for a minute.

After another bit of fruitless waiting, I tried to ask around for a place to buy a Beninois SIM card. Some guy instead took me to a woman several blocks away (great), and I borrowed her phone for 100 francs. Explaining the situation to Aubin (who was indeed waiting at the wrong pharmacy), I passed the phone to the woman and she gave him directions. After another eternity of searching, Aubin found me, gave me a hug of relief, I hopped onto the backseat of his motorbike, and we were off! It was 5 pm — I had left my hostel in Lomé at 8:45, and had arrived in Cotonou at 4:15, a distance of less than 150 km.

Aaaand immediately I’m launched into the ever-busy life of Aubin: badminton. Six years after first picking up a racquet, he’s been a national champ, started a sports federation (being the youngest person in national history to start a federation of any sort; not the easiest thing when you think about West African bureaucracy), and is now coaching a team headed to the Youth Olympic Games in Nanjing. It’s a busy life, and I’m gonna get sucked into it whether I like it or not… 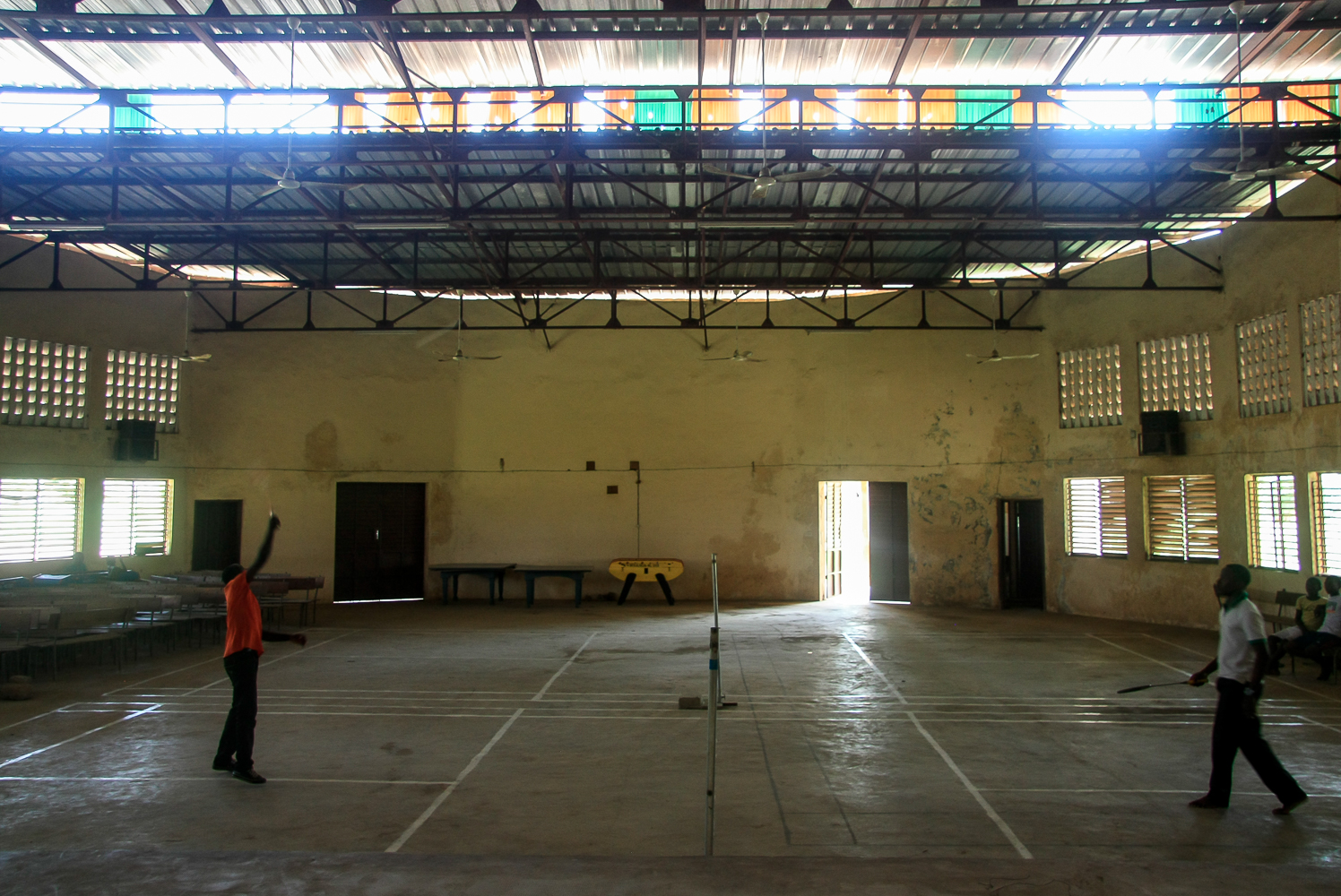 Fast forward one hour. I’m sitting in a badminton court watching Aubin play against his friends, having just gulped down a shawarma, I’m speaking broken Hindi (one year since I last used it) on one side to the local Indians (just to mess with them a little) and broken French (before this trip, seven years since high school French) on another to everyone else, and next thing you know I’m playing badminton for the first time in four years. Rusty, of course. My past is coming back to haunt me.

Stranger still, the next morning, I was thrown into a Mandarin-speaking situation — first time in years for that too. It’s interesting to see how large (well, large for Africa) of a Chinese presence there is in Benin — lots of construction companies and Chinese-owned shops, like that of Alice, Aubin’s friend who runs an importing business. Importing everything… including badminton birdies. Turns out there’s a severe shortage of them in all of West Africa. Five cartons? $50. Yikes.

Looking past Aubin and speaking directly to me in Mandarin without even asking if I spoke it, she asked me what I was doing, visiting a “poor country” (true, but emphasis hers, not mine) such as Benin. In broken Mandarin, I asked her instead how she and her husband ended up living in Benin. Being your own boss is better than working for someone else in Hubei (China), she said. Still… why Benin, specifically? Didn’t really answer my question. She didn’t understand why I’d possibly come as a tourist to Benin, grumbling about the relentless sun while glancing demeaningly at my extremely tanned complexion. When I translated for Aubin, who retorted that there’s plenty to offer for visitors in Benin, we asked her if she’d travelled around the country outside of Cotonou. In French, she replied, “Yes, two or three times to Ganvié, for business.” “Did you like it?” “No.” We were both left incredulous.

Well, no matter what she said, I knew I’d have a good time and enjoy Benin. I most definitely did.

I let Aubin do all the planning, taking a backseat for once — figuratively and literally, on the backseat of his motorbike. At this point, without the ability to fully understand everything or the vocabulary to object, why not? I went along for the ride, and as my French improved day by day, I realised that Aubin’s planning was impeccable anyway, and that I had no reason to question any of his choices. I was also fully aware that Mr. Always Busy had totally rearranged his entire week’s schedule for me, a guy he had just met. Aww! Oh, that, and he had stayed up the entire night partying after dropping me off at my guesthouse, and was still taking me around from early in the morning. Heh.

We zoomed off north of Cotonou, passing Abomey-Calavi and making a turn into a beautifully rural stretch of unpaved road, grasslands all around. When we emerged at the other end, we were on the edge of Lac Nokoué, facing the village of Sô-Ava. From there, we chartered a pirogue and headed to Ganvié, arguably the largest and most famous stilt village in the area, passing several other communes along the way, none connected by land.

It’s a beautiful ride there, and the car horn-less silence, the birds, and the sounds of the water made for a rare moment of peace. Fishermen (usually boys) stand neck-deep in the water setting their traps, small boats paddled around shuttling people from commune to commune, the occasional sailboat, and the occasional motorboat zooming by, comically overloaded with goods. 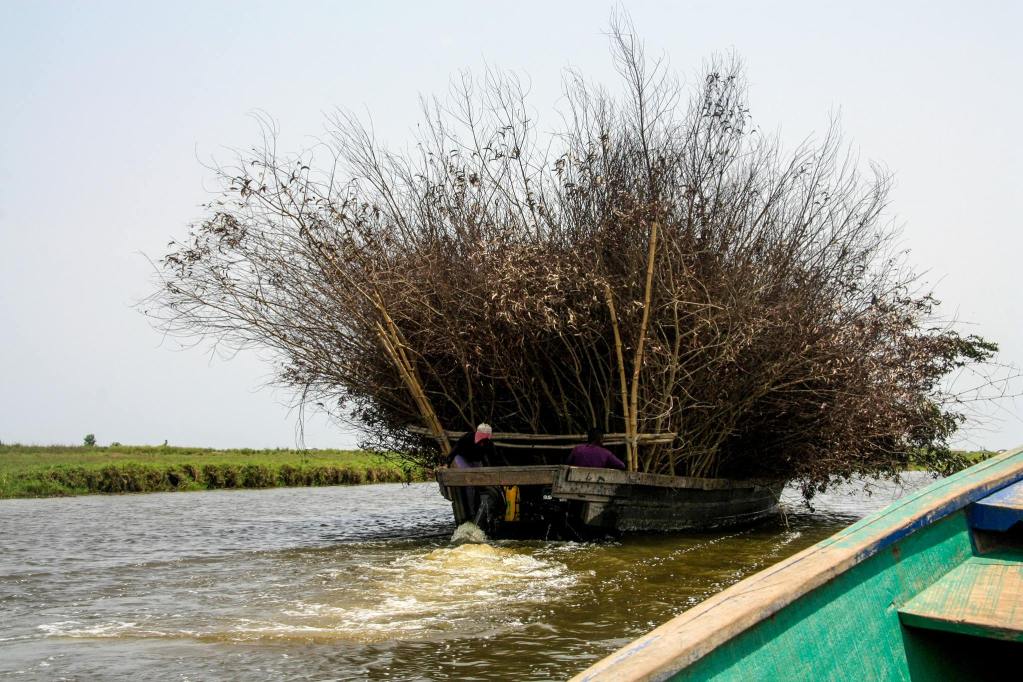 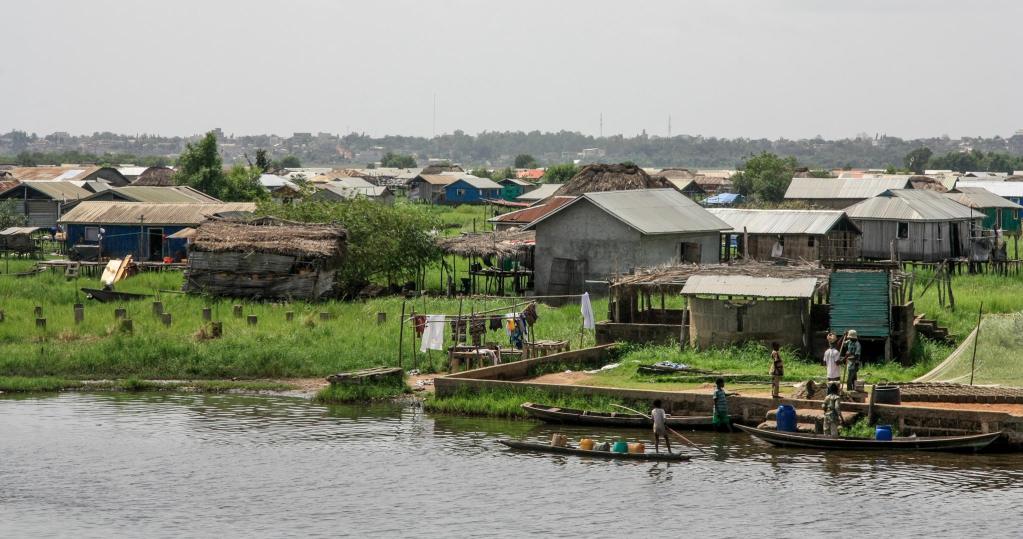 Heading around the corner and seeing Ganvié really did take my breath away… and at the same time wonder how you’d possibly get around if a boat wasn’t available. (They’re in abundance.) Head to the floating market for your veggies? Head to the barber on a free-standing stilt hut? Head to the “corner” store (there aren’t any “streets” or any sort of layout I could see) to buy more phone credit? Head to your neighbour’s house? School? There’s probably a lack of electricity and infrastructure in general too, as rightly pointed out by some locals to me. But in all of that… it’s beautiful. And it’s buzzing with traffic too — many large boats, shuttling 1, 2, 5, 10 passengers every which way, stopping once in awhile to pick someone up. In fact, even our “chartered” boat started doing that too, with passengers coming and going and leaving a 200 franc piece behind. 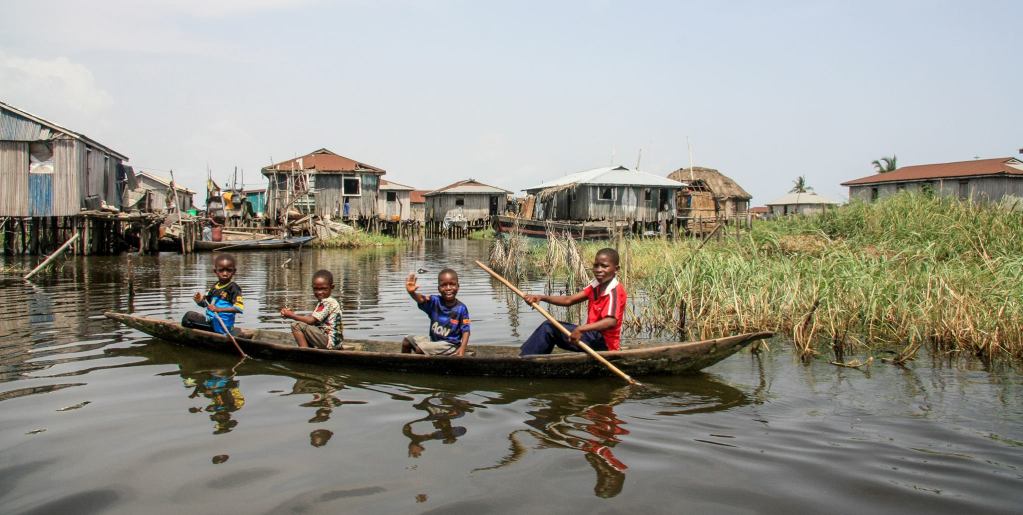 And with the increased population density… children. Children on boats, padding themselves and their friends around.

“Hi! Give me money! A present!” Couldn’t toss one to you waaay out in that other boat even if I wanted to, kiddo. 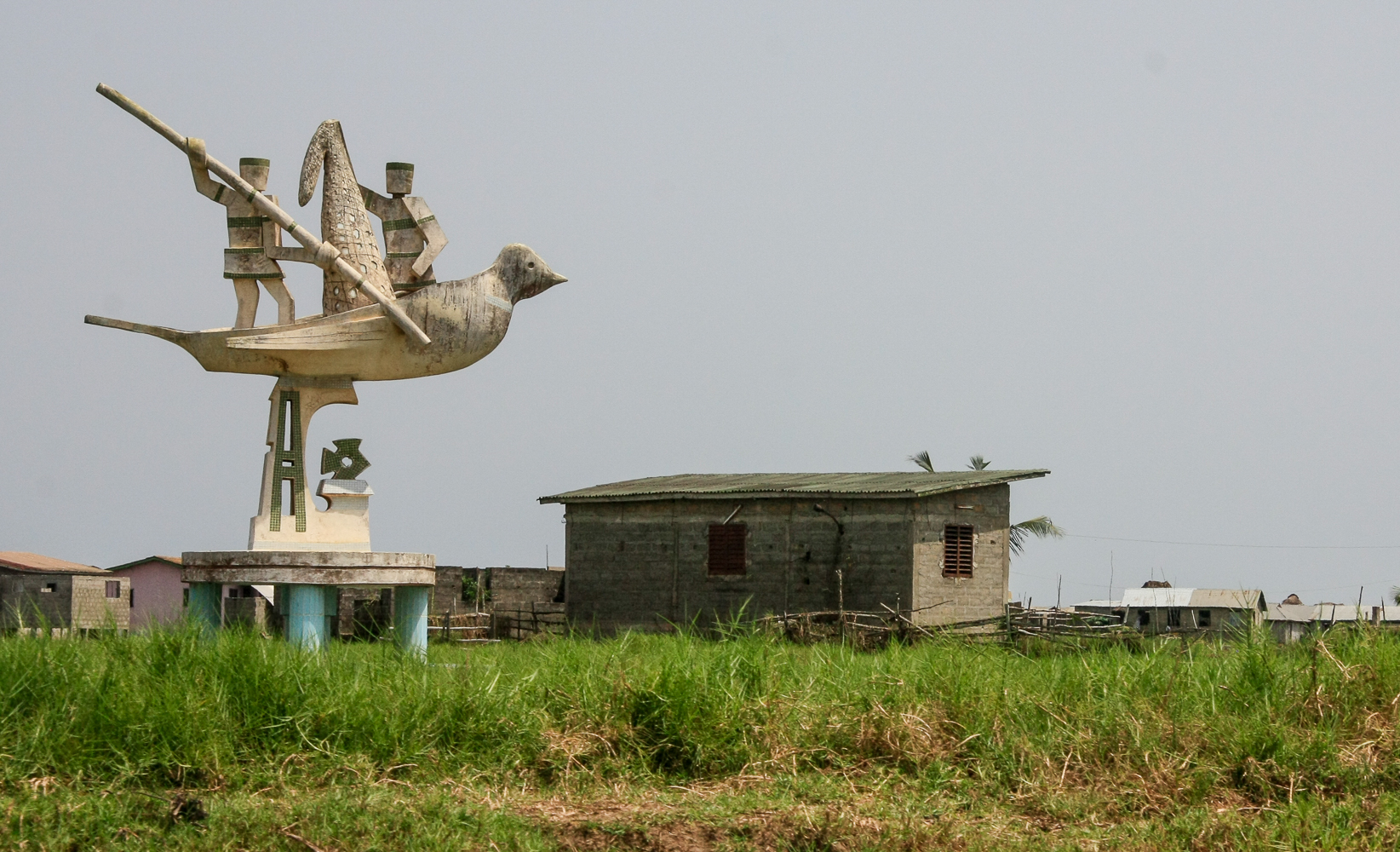 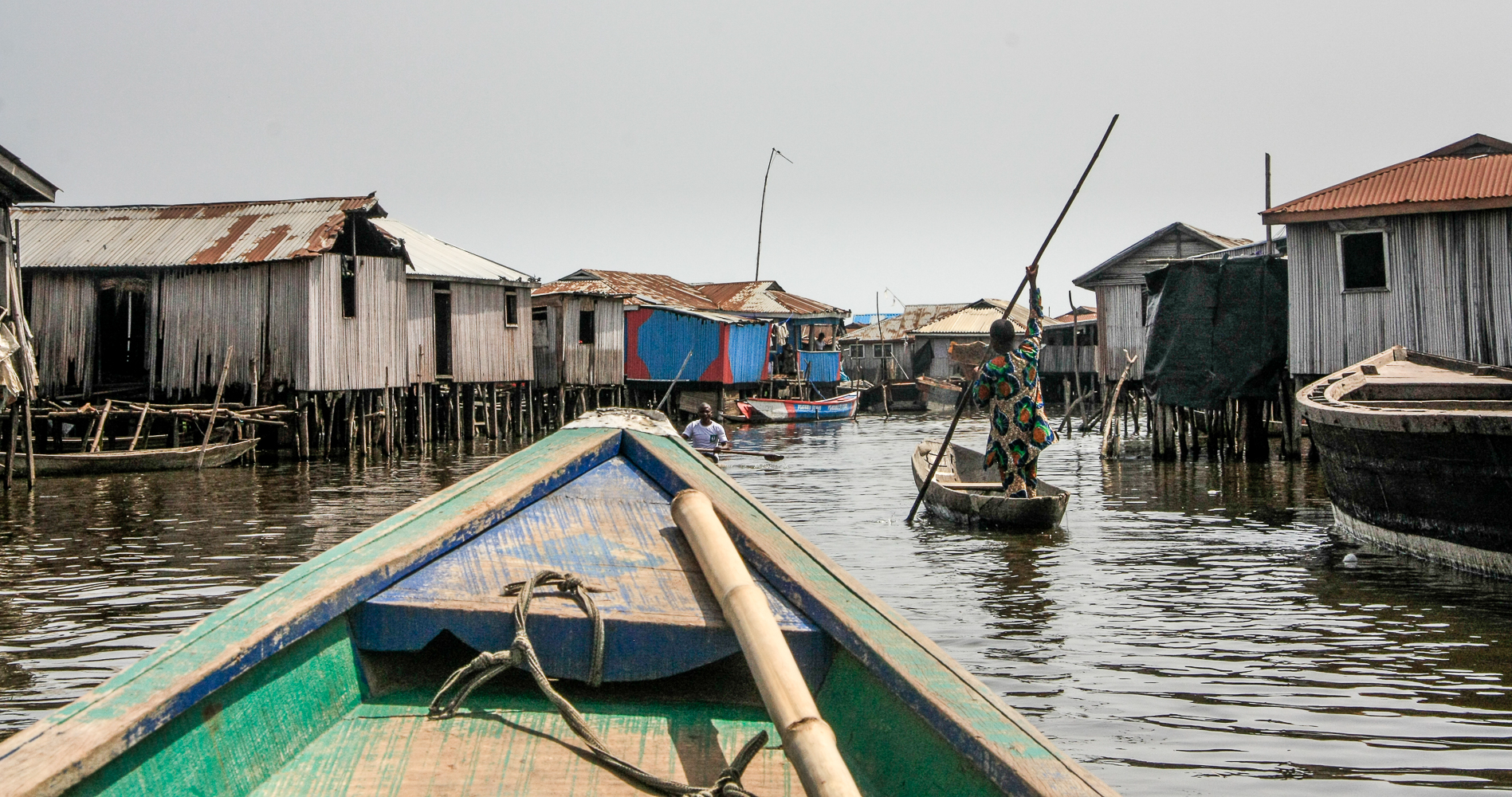 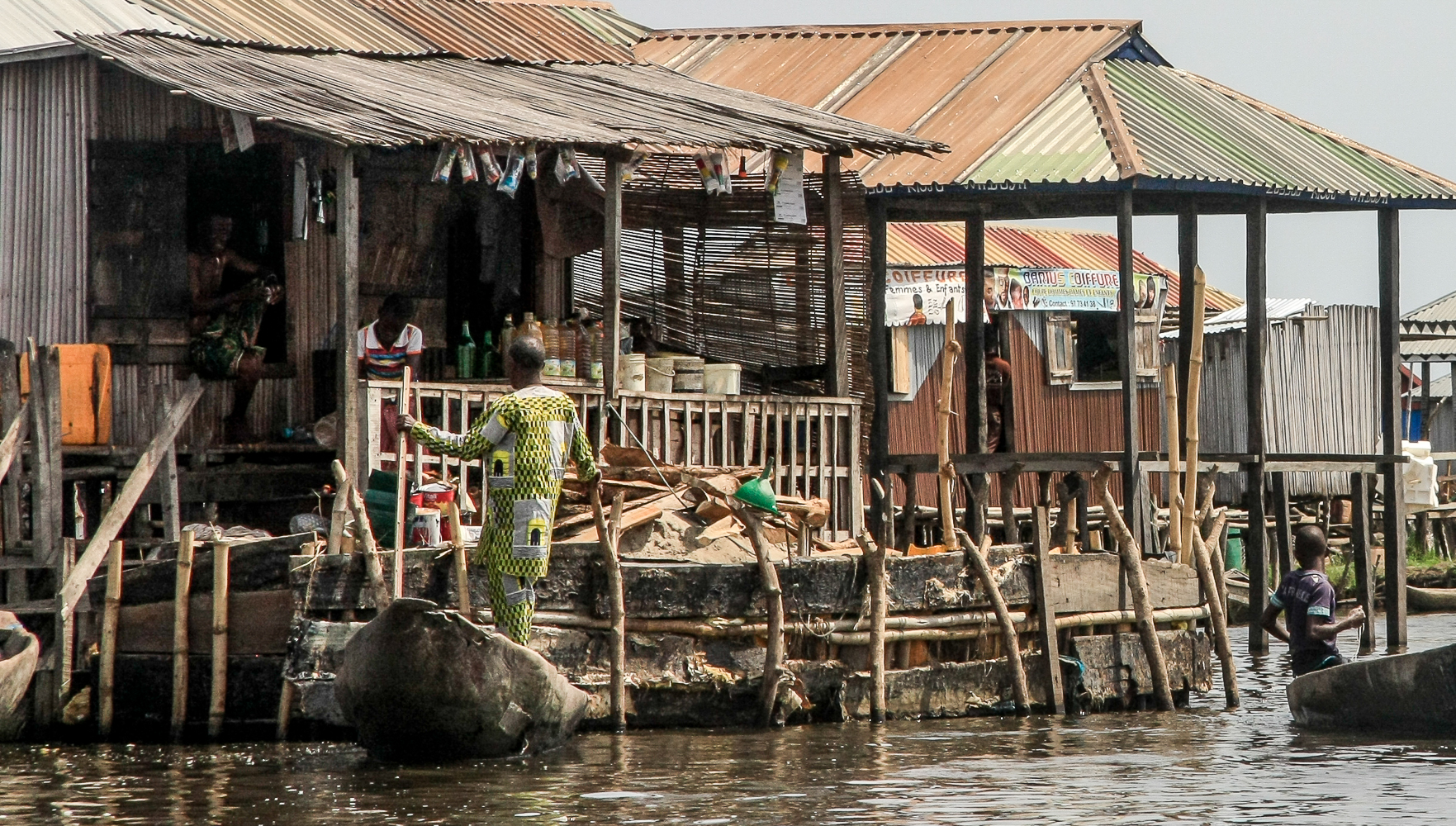 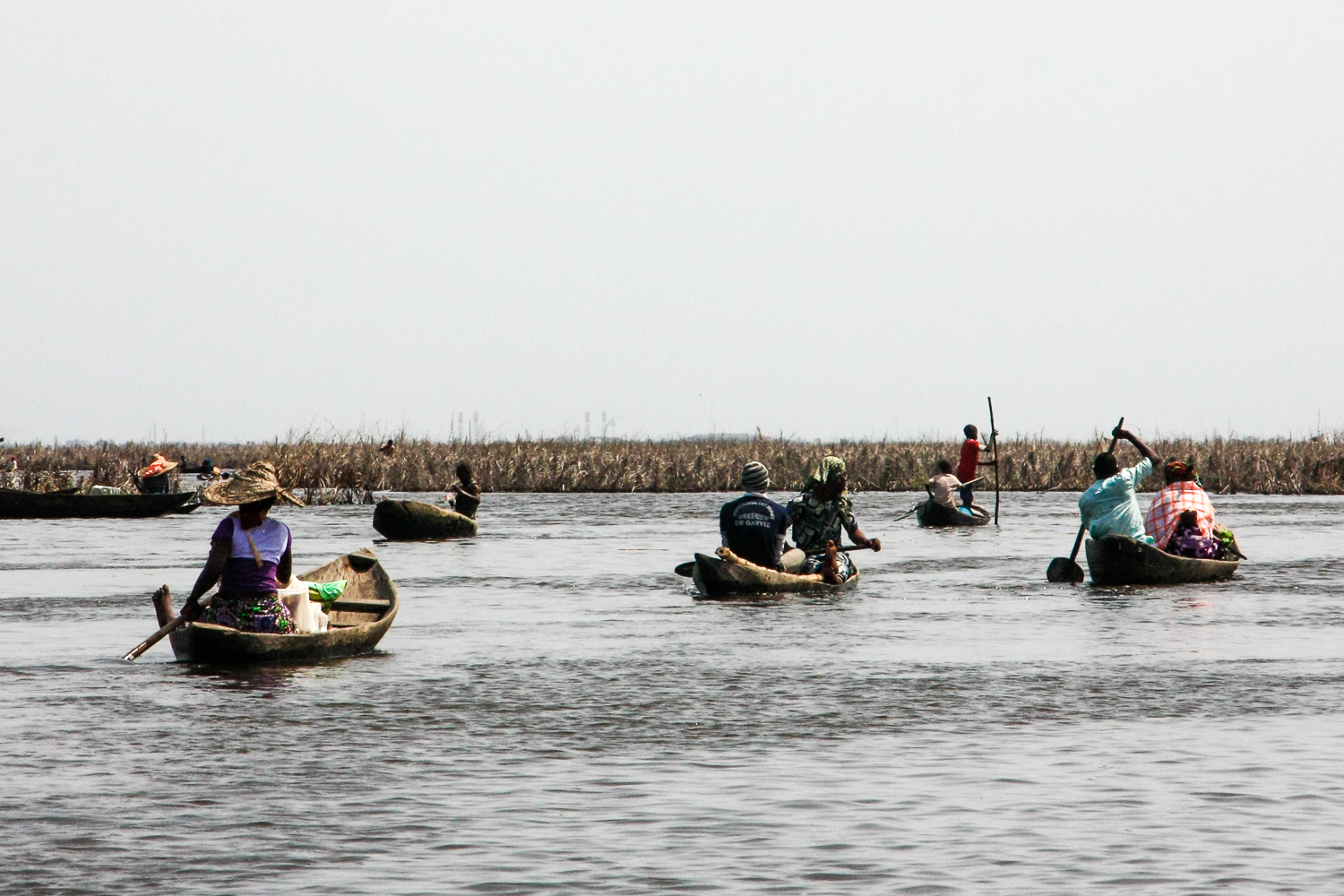 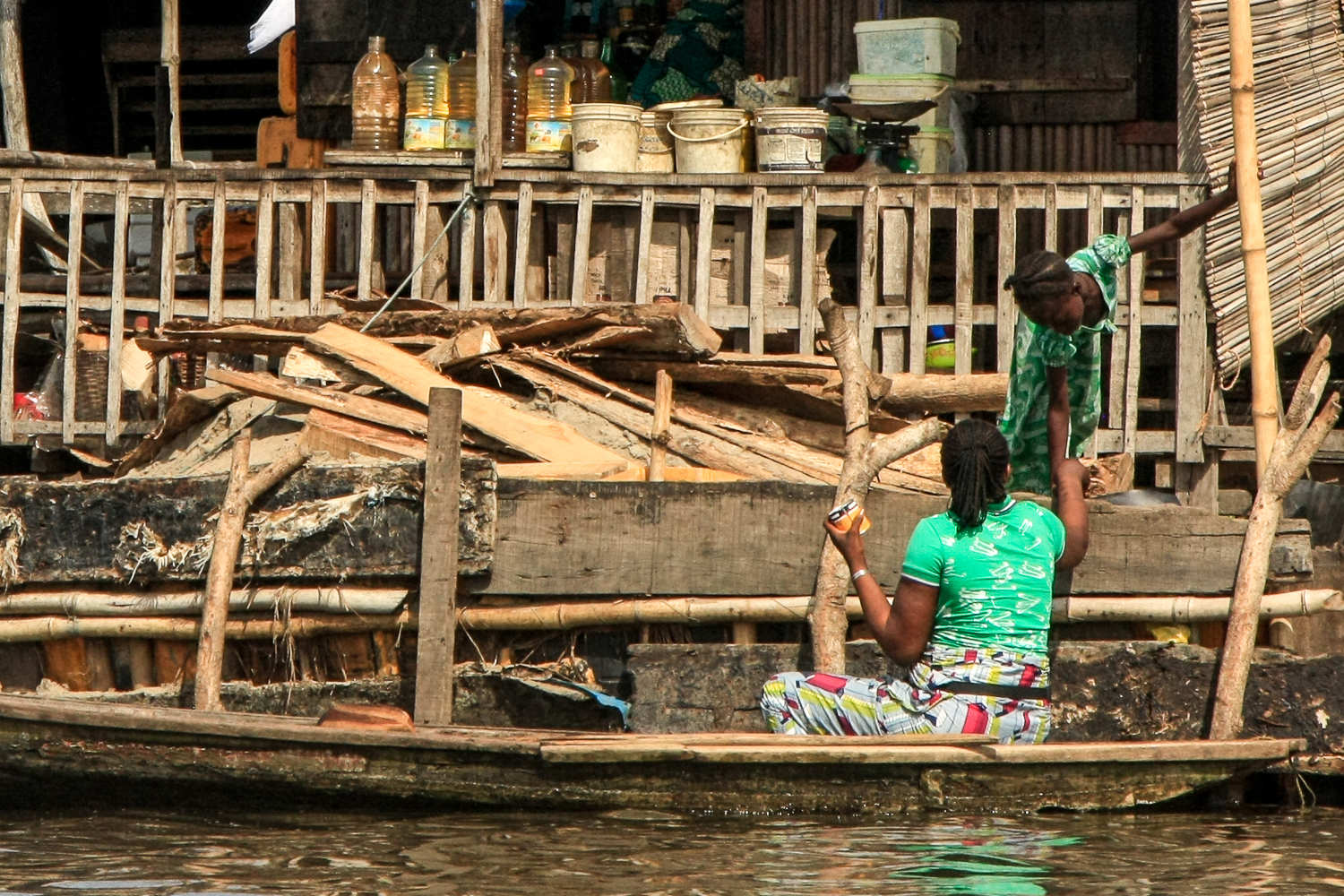 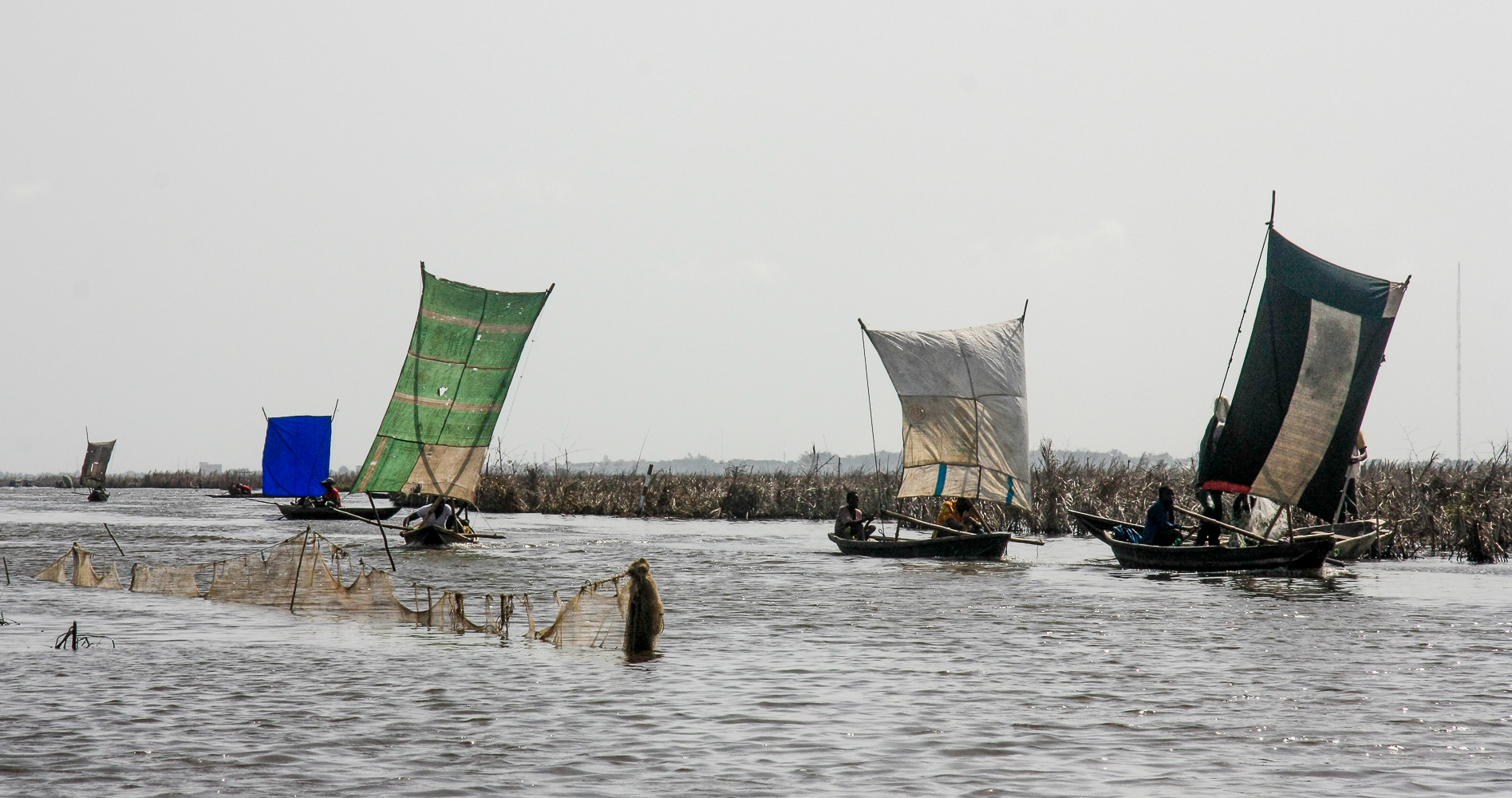 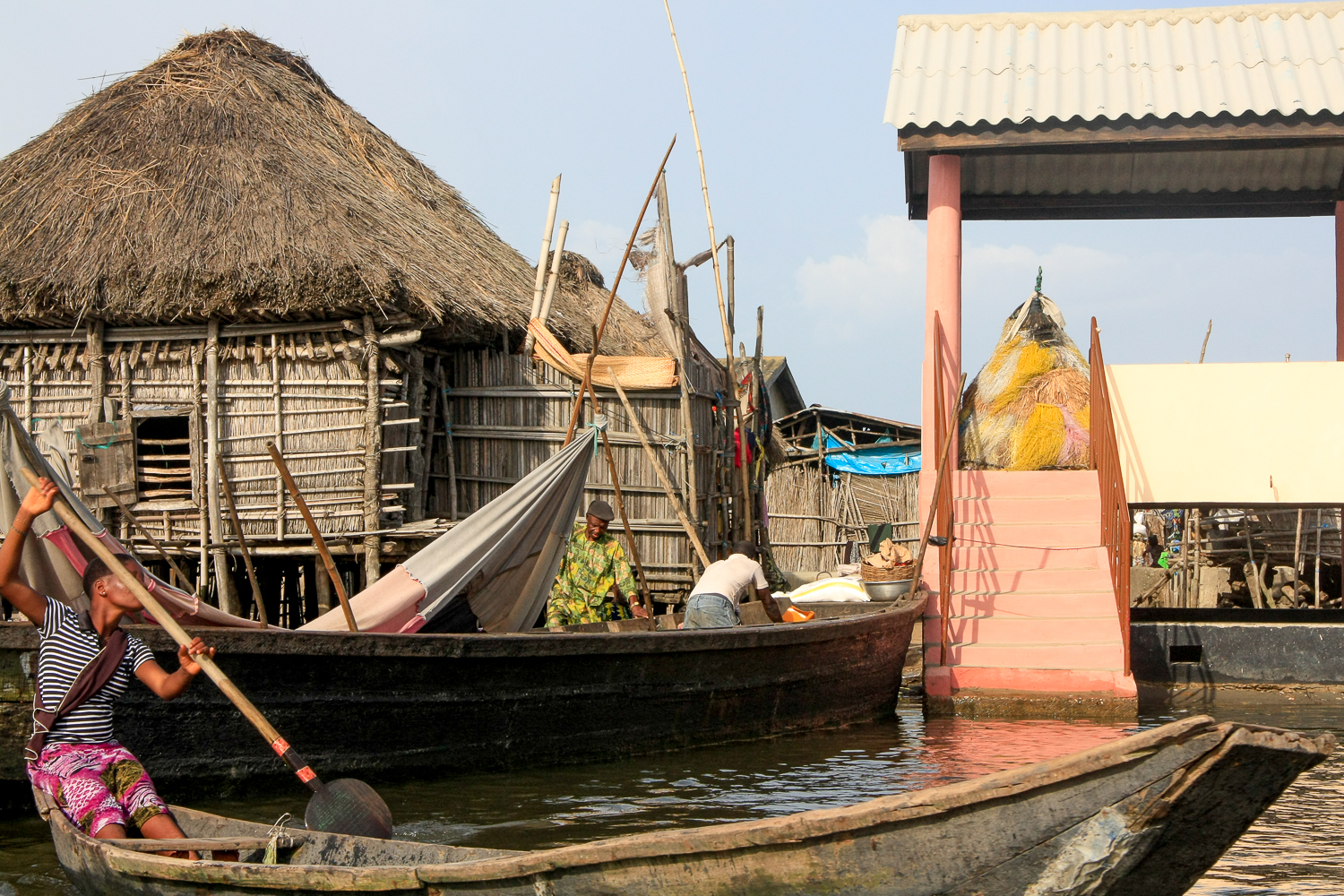 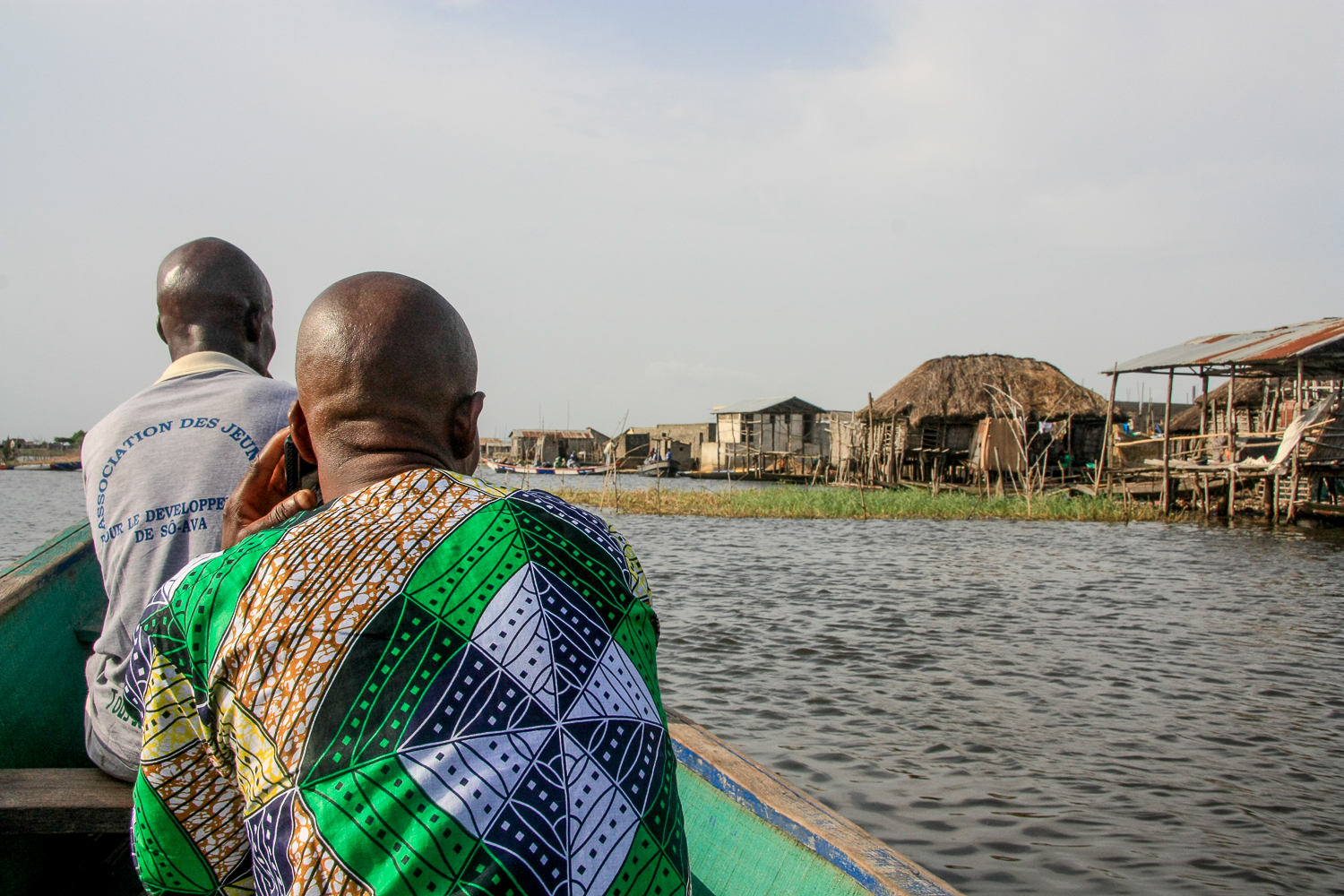 After some time relaxing over drinks, our boat driver decided to take us to his home village of Sô-Tchanhoué. (As for me, I had no idea what was going on and just went along with it.) While Aubin, a gym teacher some days of the week, ran into several of his students, I was swarmed by little kids, had a few of them grabbing my not-black arms, and got the yovo song 200 times, but this was particularly memorable:

And so… in a moment of weakness, I perpetuated Chinese stereotypes and play-fought the kids. Small punches, little roundhouse kicks, a “HA!” here and there… I don’t actually know any martial arts. But they’re kids, they ate it up and I became the local attraction of the day. Not my proudest moment, but I don’t regret it one bit.

We were invited for beers with a friend of the boat driver, and I had a nice chat with various villagers. Three little girls in the next-door building would pipe up every few minutes. “Yovo!” I turn my head. They smile, hide, then emerge again after a few seconds. “Yovo! … bonsoir.” Demure smile.

Another night, another trip to the badminton court. And as would become routine for the next week every time we had a spare moment, another trip to Aubin’s “second family” — that is, his girlfriend Miguelle’s home, which she shares with her mother (whom everyone, related or not, simply calls “Maman”), as well as her best friend Kesley. Somewhere in the rapid-fire code-switching between Fon and French (“franfon” according to them, but I refuse to call it anything other than “fonçais” — come on, it’s catchy), their patience to include me got me to try a little harder with my own French. Didn’t stop me from feeling like I was in a 24/7 game of Taboo, or frequently mishearing things and giving answers completely unrelated to the question, or making a fool of myself from time to time, but it made it a little less painful. We’d have dinner or we’d just sit in their living room watching a telenovela and drinking some beer, I’d tune out on occasion when everything whizzed by in fonçais, Kesley and Miguelle would joke around knowing I’d agree to almost anything even if I didn’t understand — though they unsuccessfully tried to coerce me into getting a single tress while Kesley was getting a weave full of hair extensions (wow, does that take an entire day or what!!). Heh.

My guesthouse was just as welcoming. I stayed at the home/guesthouse of Firmin and Clémentine, where upon arrival I was immediately offered a large bottle of La Béninoise — a perfect beer for a lightweight like me — before I even so much as had a chance to speak. They and their slightly oddball extended family were equally accommodating, and upon finding out that Clémentine’s brother just so happens to live in Boston a 15 minute walk away from my house, I offered to bring something back. Tiny world we live in. 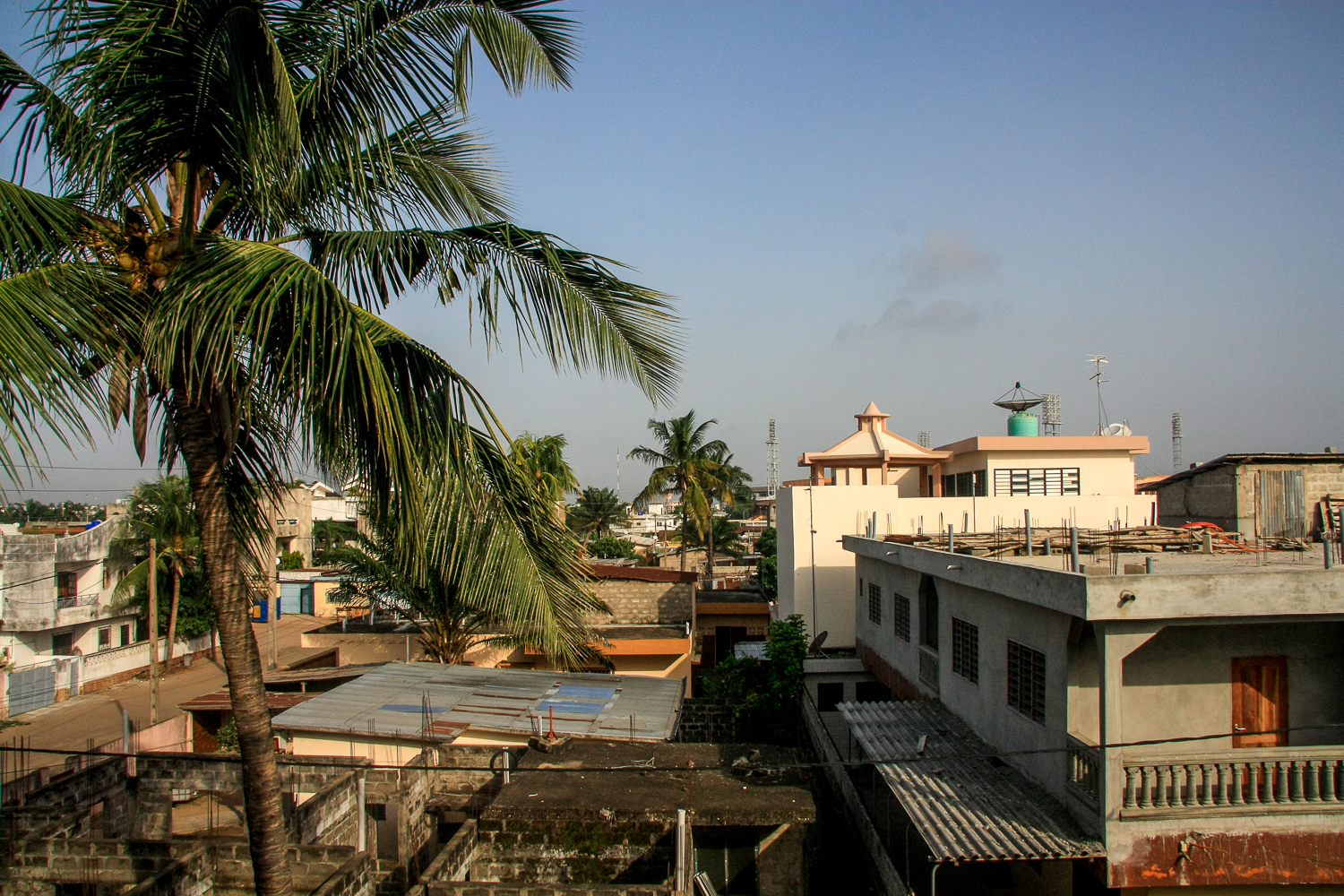 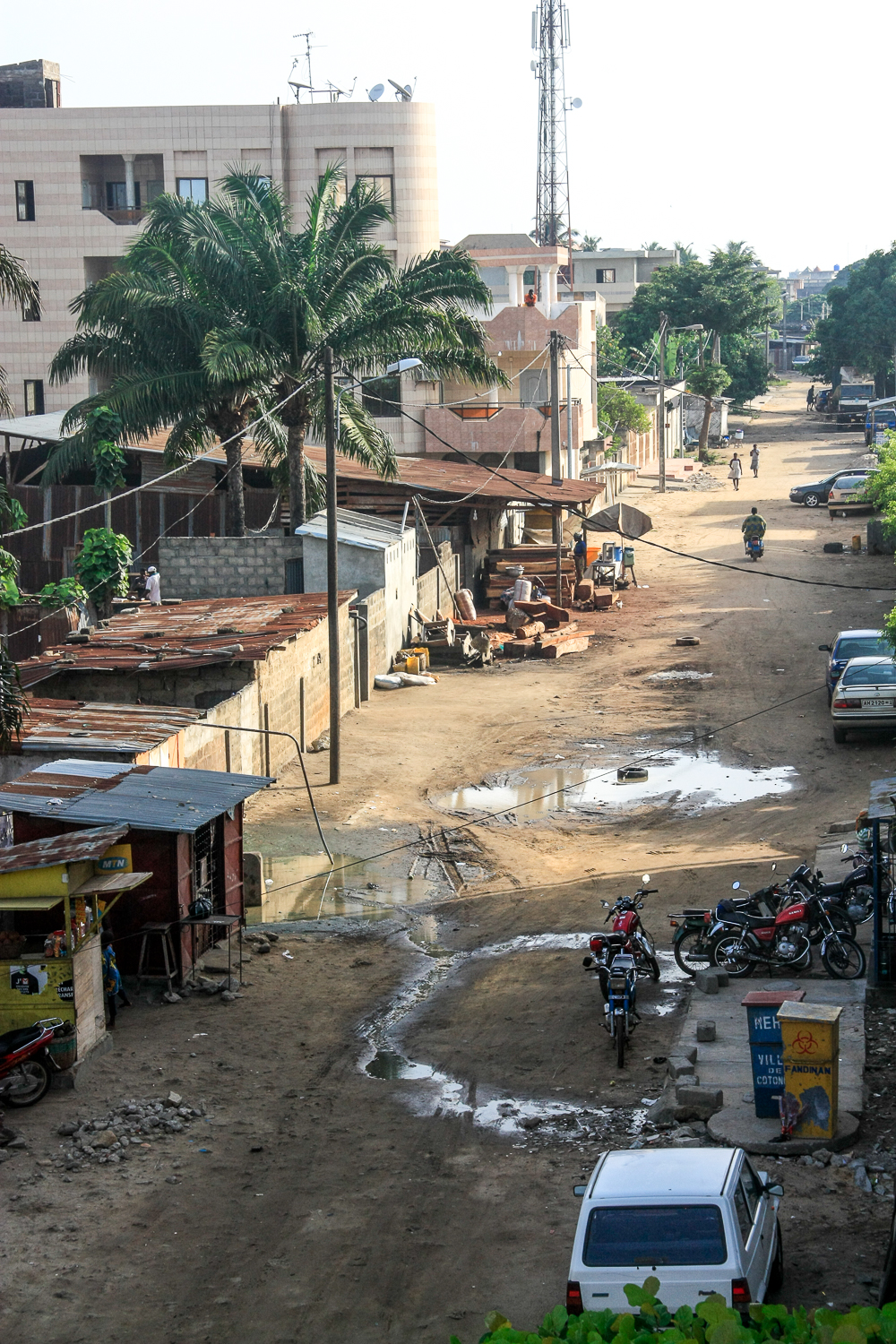 All in all, this is where my trip changed from being a lone traveller in control, to where I let everyone else decide things for me. I was just along for the ride, and it was about to get a lot more fun.

One thought on “Backseat”