Kesley pointed at the neighbour’s door excitedly. Before we had any chance to walk more than two steps out of our hostel, a set of 8 dots caught her eye. She called Miguelle and told her we’d be an hour late.

Next thing I knew, the two of us crammed ourselves and our stuff on the back of our hostel owner’s motorcycle, heading towards… somewhere. The 8 dots on the door meant there was a Ifá priest inside. When Kesley asked the hostel owner, he mentioned that his brother was one, and that he could take us there instead.

Knowing that I had absolutely no idea what they were talking about, they gave me an example. A former president of Brazil, before becoming president, was in Benin and went to see a priest. The priest was able to divine his future, but told him that there were many evil forces acting in his life that were preventing him from his potential. Afraid, the future president gave some money to the priest to perform the rituals and sacrifices necessary (in this case, buying 8 goats and simply releasing them), and followed all instructions related to dietary restrictions. Few years later, this guy becomes the president of Brazil. Believe it or not?

Kesley did, certainly. She knew that there were people out there channeling evil energy towards her, she just needed to get rid of it. So it was decided!

She turned to me and asked if I wanted to participate too. Taken aback, I mentioned that I was religious — to which she retorted that Ifá transcends religion. Same goes for Vodun (voodoo) too. Never mind that Vodun is actually recognised officially by the state as a religion… it’s not really one. She gave me an explanation — while Ifá and Vodun consultations are different from each other, they are both forces of nature akin to horoscopes to which she strongly believes in, all the while being a Catholic. In fact, the church and West African religions have long coexisted peacefully, with most people I’ve encountered believing in a mix of both — even that python temple in Ouidah is right next to a cathedral. Neither has no intent of action, it merely reads fate as determined by divination. More confused than ever, my interest was piqued.

Unfortunately for us, the Ifá priest (for lack of a more descriptive word) was busy and told us to come back in a few hours. So we joined up with Miguelle and had a private tour of the Musée Historique d’Abomey… by an uncle of hers that she had never met until then. Go figure.

Abomey was the capital of the former Dahomey (Dan-Homey) empire, and as such, has a bunch of palaces around. Each king would build their own, never living in an old one; the museum encompassed the palaces of Ghezo and his son/successor Glele. It seems that neither Miguelle nor Kesley had familiarised themselves with the history either, so we were all pretty fascinated as we were led through the tales of warring factions, trade with the colonial powers (slaves for cannons, anyone?), selling out their own people as slaves to further enrich themselves and their inner circle, and their popularity and eventual dissent due to the increasing amount of their own people they were taking as slaves, even when the European powers had abolished slavery.

They were a particularly ruthless people back then — the castle walls were lined with hieroglyphs of killing methods. Beheading seemed to be a common one: the king would have someone in charge of holding and spinning his umbrella in a counter-clockwise direction, one of their superstitions to bring luck and wealth. If he were to spin it the other way, off with his head. The king would also be transported by litter (chair with long rods carried by two or more men). If the men ever stopped to put him down, off with their heads. Seems a bit harsh if they were to tire out on a particularly long journey…

There were plenty of accounts of not only beheadings, but human sacrifices and dismemberments of enemies. The neighbouring colonial powers used it as an excuse to fight, calling it a purge of savages.

Ghezo had 4000 women available to him, and the only men who were allowed around them were eunuchs. He took 41 as “wives” (41 being a lucky number of superstition), and when he died, all 41 were buried with him, along with 41 of various things to accompany him to the next world. He also was responsible for the notorious Amazon army — he had his regular army of men, but a smaller, more specialised army of women, the only soldiers allowed to carry guns. They were known for their fearlessness and extreme capability that surpassed all of the men, even though they eventually fell to the French and their superior weaponry.

We were not allowed into Ghezo’s compound as it remains in use for vodoun ceremonies, but we were allowed into Glele’s tomb: a long, very short structure. You had to bend over to walk in, and you’d stay bent over while circumambulating the tomb counterclockwise — basically, forced reverence since the ceiling’s so low.

After this fascinating tour and a goodbye to Miguelle, Kesley and I picked up where we left off in the morning — back to the priest. Through the back streets, a turn here, a turn there, and into a family compound.

We head into a small room where the priest is sitting on the floor on a mat, occasionally distracted by his two cell phones. In front of him were 2 strings of 8 cowrie shells each. Quiet and softspoken but also looking like he just woke up from a nap (dressed in an undershirt and jeans), he asked Kesley what she wanted to consult about. After she repeated a few phrases after him in Fon, he tossed the shells, let them fall, covered them with a bag of something, then paused for a silent prayer.

He lifted the bag, then tapped each of the 16 shells in succession before reading them — some shells landed face up, some landed face down. Geomancy. 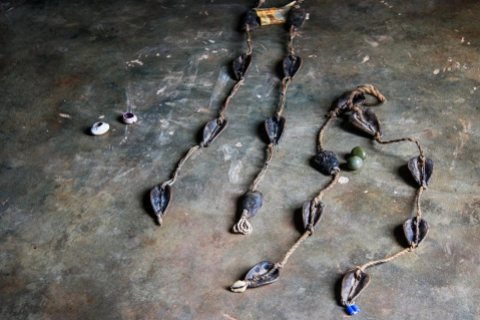 What went on for the next half hour, I don’t know for sure, since they discussed the result in Fon. Kesley had asked about her prospects in relationships and other endeavours, and received an answer with both positives and negatives. She wrote her name down, paid another 4000 francs, and we left (after I declined a consultation, citing my inability to communicate personally and openly in French), with her deeply moved by the experience.

Indeed, when she told other locals in Abomey about the priest she saw, they were in accordance that she had seen a good one, a true priest. She told me how the priest seemed to already know personal details of hers, and she had paid him at the end to remove the sorcery from her life — there were bad spiritual forces and actors around her, just as her father had warned her about. It’s an occasionally messy process best left to those who know what to do, and they can do it in her name. And she’s now got this guy’s business card to hand to her dad.

Before heading back to Cotonou in what turned out to be the most uncomfortable ride I’ve ever experienced (5 hours of being shifting between two immensely awkward positions, lest be jabbed by sharp metal protrusions), we headed to Bohicon next, to Parc Archeologique d’Agongointo, a subterranean town accidentally discovered during road construction. It’s one of many caves used by the Dahomean army for protection during wars, with sufficient room for living, a cavern for water, ventilation for fire, and cleverly-placed communication holes. Admission came with the curious instruction to not wear red — turns out locals use this cave for a vodun ceremony, the details of which they do not share other than the fact that red is not allowed. Elsewhere in the park, an iroko tree growing intertwined into a baobab is marked as sacred, dedicated to Dan Gbegnon, the divinity of prosperity, and still in active use for offerings. The beliefs run strong.

I had a glimpse of further superstitions the next day in Porto-Novo (Benin’s capital, completely dwarfed by neighbouring Cotonou). Aubin took me to the Musée da Silva, a former home of the affluent da Silvas, an Afro-Brazilian family who returned to Benin generations after the end of slavery. While looking through the vast da Silva collection of random things they were able to afford from around the world (everything from vodun fetishes to revenant costumes to record players to antique cameras to Asian vases to fancy vintage cars and motorbikes), we glimpsed through a treasure trove of photos throughout history and were guided through the vast intricacies of relationships and the surprising clout of the Afro-Brazilians, who returned to Benin several generations after the end of slavery. They even built a Brazilian church, large and Bahia style, in the centre of town… except it’s now been converted to be the Grand Mosque of town. Makes for a jarring sight.

The Afro-Brazilian men would marry multiple wives, usually from the same few rich families around, to concentrate their power. The structure of their family homes were laden with superstition, and the da Silva one (built in Portuguese architecture, making it stick out) was no different: while everyone lived upstairs, the women and children were not allowed to use the front staircase, which was for only guests and the father of the household. The father had his own room separate from each wife’s, and they were not allowed to stay in his room: women were believed (and still are, since Aubin seems to!) to have mystical energy, a certain “gris-gris” that would affect the man if she came into his room. The walls of the house were covered with pictures of vodun deities, both ones with Beninois origins and ones with Brazilian origins. Brazil has vodun beliefs rooted in Benin, but they developed separately and diverged due to slavery. Might as well revere every single one out there to cover all your bases, eh?

After a few beers and quite possibly the most delicious meal I had all month (mmm, barbecue pork…), we returned to Cotonou and Aubin took me to the Dantokpa market, with its infamous vodun section. Amid the fetishes of rats, monkey heads, antlers, and skulls, we went to see a vodun priest friend of his for a consultation. Unlike the one with Kesley, Aubin did this one more for me than anything, but he still had something to ask — he had a large amount of money stolen from him a week ago. So, what to do?

Out of everything in the room, the fetishes of dried animal parts, the writings for the deity Mawu, the priest handed him a large bowl of… stuff. Feathers, chains, hooks, trinkets. He poured a bit of some potion on it, lit a match, and threw it in. It extinguished immediately, smouldering. He asked Aubin to throw in a small handful of beads in there too. Aubin repeated a long prayer after the priest, then we waited. After a pause, the result: in seven days, the culprit would return the money. That is, if the culprit was…something something. (French vocabulary still lacking.) If not… later. Still, all Aubin had to do was wait.

But so it was said, and so it must be… right?

Trying out the furniture 📸 @t_rainie