I enjoyed Benin so much that I stretched my stay an extra two days, cutting everything else from my itinerary. Instead of using them to go somewhere far, I chose to hang out — at the beach, at the badminton court, at Miguelle’s house, at my hostel with Firmin and Clementine.

With my French finally at a basic conversational level, it was all the more refreshing to get to know people better… tragically, just as I was about to leave. We coached Kesley through her interviews for a volunteer opportunity in Canada. Aubin and I exchanged music and learning materials related to informatics. Maman and her gang at the shop gossiped some more, teased me about potentially dating African women, while I dished right back to them. Lots of time killed on Youtube, huddled around a smartphone. I played a bit more badminton… and at least scored a single point. Watched a few telenovelas with Clementine and her family, then received a few bags of peanuts and tapioca flour to bring to her brother in Boston. I was killing time and enjoying company. I felt like I could stay… I really didn’t want to leave. 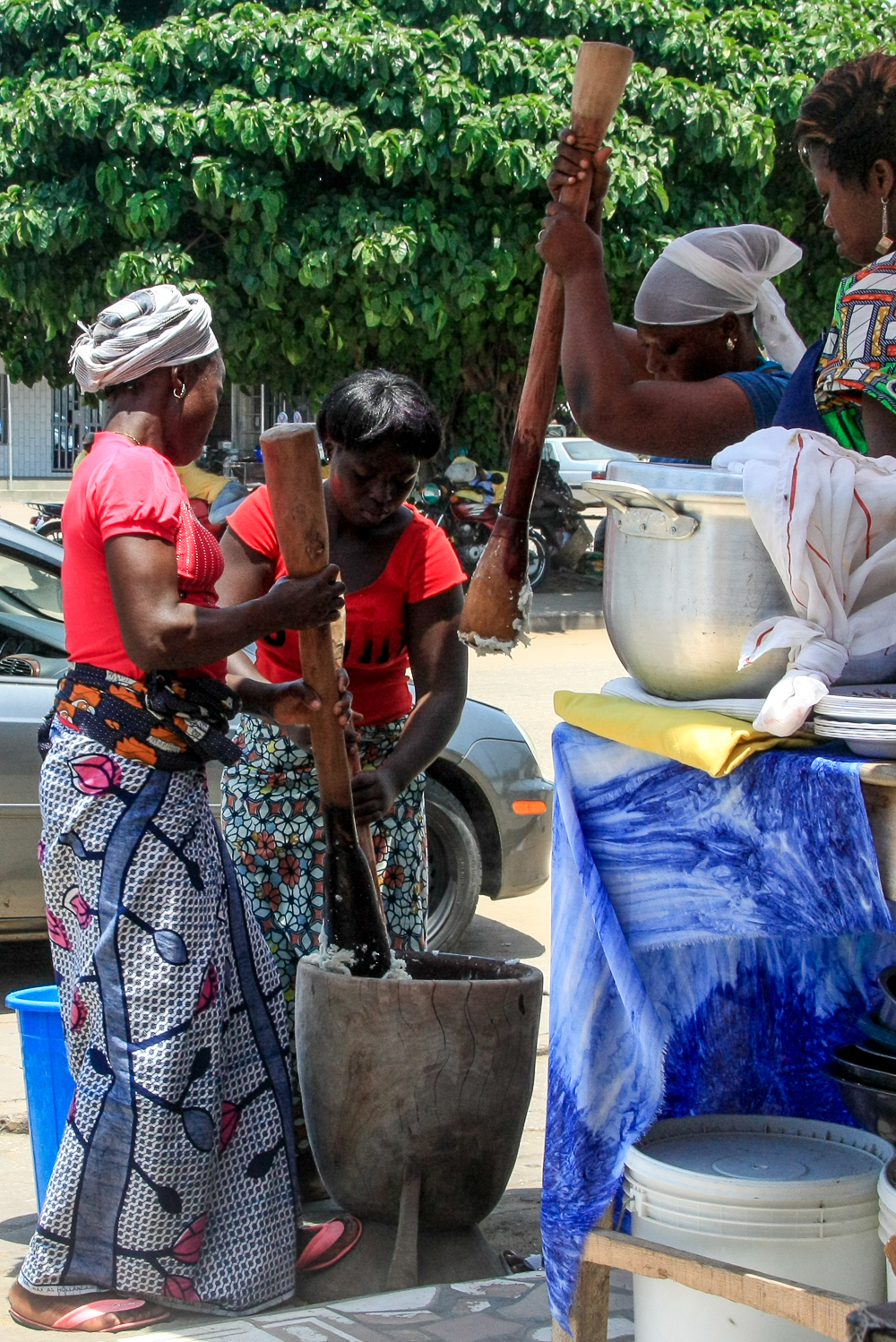 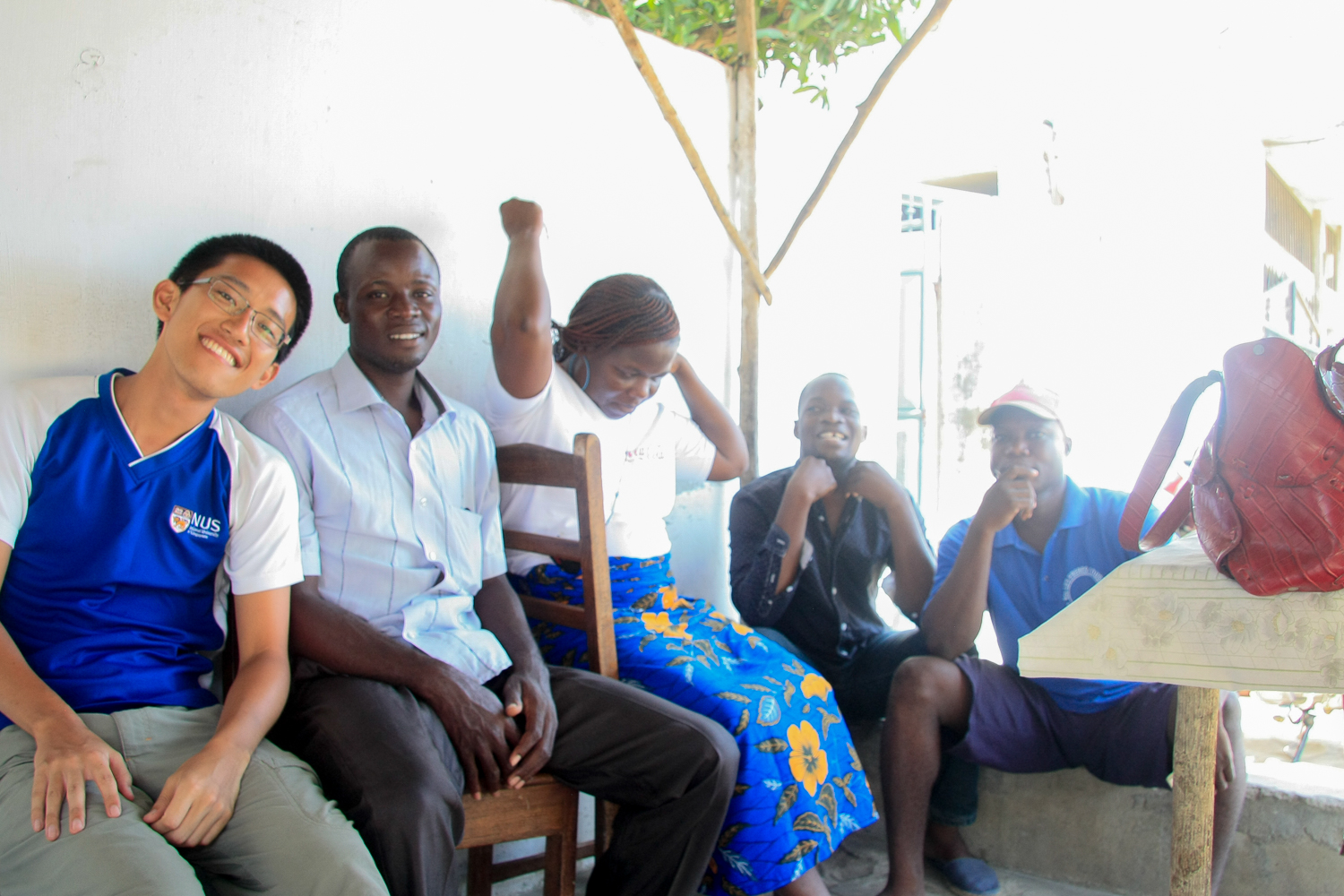 One conversation with Aubin really stuck with me though. It was a daring topic, and he brought it up suddenly — why, after some 50 odd years of independence from the various colonial powers, was West Africa still so far behind? I never did give it much thought. He made a direct comparison to Malaysia and Singapore, which became independent around the same time, yet are now beyond developed — in the case of Singapore, leading the rest of the world. You could argue that all of them were pretty plundered by their former rulers, too.

While his personal ambitions are outsize to his country and stretch well beyond its borders, he brought up the lack of ambition in local culture, and the lack of drive or action. Kids want the newest technology and they get it, but they don’t have any desire to learn how to make it or improve on it. And so, you’ve got kids carrying futuristic devices made in China surrounded by crumbling infrastructure from decades past that is being fixed up by China. Nothing is maintained or improved, only fixed to the minimum when it is broken. And there’s the common refrain I’ve heard, not just from Aubin — education’s too rigid, teaching people to parrot things back rather than to think for themselves. (Now isn’t that a universal problem?)

I can’t say at all that after a month that I know even a little bit about to how solve the endemic development problems in this area of the world. But he’s got a point, though. There’s an anything-goes kinda vibe that’s unshakeable. Given the right people with enough patience and drive to take advantage of it, the possibilities are endless, as it has been for him. You can’t ignore that it’s tougher here to get anything done than most places elsewhere in the world, but it can get done.

We toasted our last night with a rabbit dinner and a final Béninoise. Then in the morning at the bus station… a final final Béninoise. (Beer at 11 am. Why not?) It won’t actually be my last one, cause I’ll be back someday. 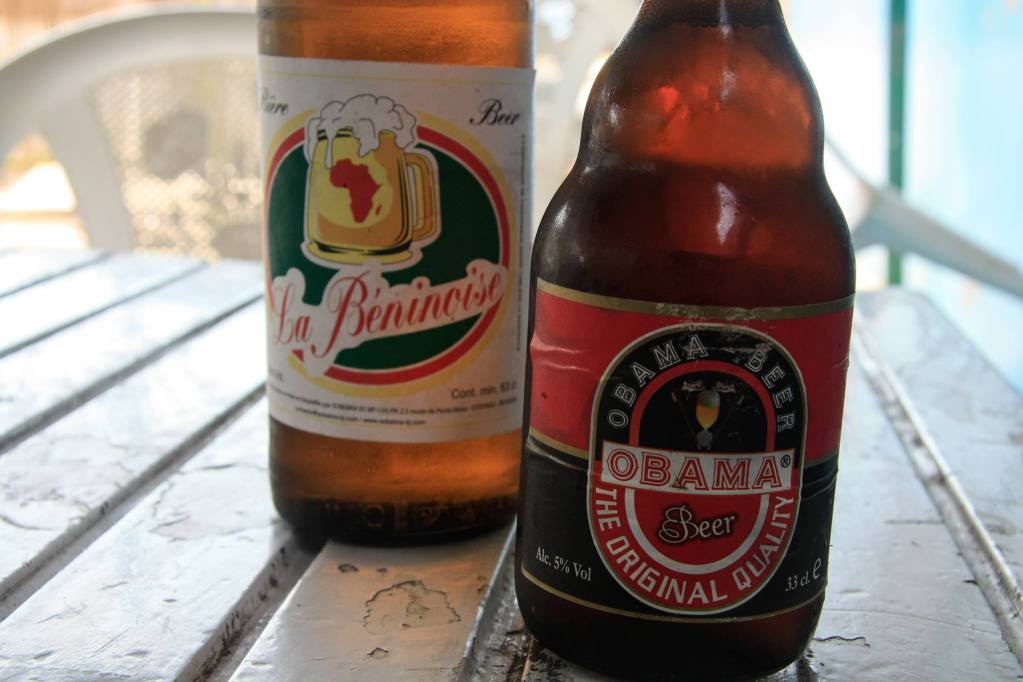 On this jolly, comfortably air-conditioned bus ride coming from Lagos, Nigeria, pretty much no one was able to communicate in French with the street hawkers who swarmed the bus.

We passed the city beach. Packed, unlike during my visit prior. It was a weekend, after all, and armed with renewed energy, I wished that I had the time to see Lomé again and venture out a bit further.

There were only five non-Nigerians and non-Ghanaians on the bus, me being one of them. This meant that we were all singled out for customs hassles. Crossing into and out of Togo, our bus minder paid a few bribes. Still, that didn’t preclude us five from having to fill in all the forms (with me being the sole English-French translator around). We were shuttled from customs building to customs building by zemis — I was surprised to see the bus minder pay a 500 franc bill just to shuttle us a few metres. Guess the Nigerians really do have money.

Most of the bus ride was Nollywood film after Nollywood film (that is, Nigerian Hollywood). Melodramatic acting and low budget aside… the cheap humour got the passengers rolling with laughter. Kinda grew on me, cheapness be damned.

When we got to Ghana though, we switched to a Ghanaian film, “Somewhere in Africa”, about a brutal coup in a fictional African country. And wow… was it brutal. Killing scenes and torture scenes abound, nearly every passenger looked away, but that didn’t stop us from hearing the screaming. Unlike other Ghanaian movies, this one was quite well acted and high(er) budget, but again, the plot — peaceful times, endless spiral of suffering, climax of absolute horror… then suddenly, they fast forward two years later and everything’s fine, explained away off screen. Whaa? I’m back in Ghana alright.

Looking out the window, the contrasts that were originally not apparent to me were like night and day. I could just tell I was in Ghana. No more motorbikes. More paved roads. People speaking English — well, duh. The cries of “essi, purewater!” I was able to bargain again for taxis, and do it well for once. Nicest strangers in the world. Talkative, friendly people. Not to say that people in Togo and Benin weren’t, but there’s a marked difference in Ghana, a different openness.

As much as I missed Benin at that moment, I felt welcomed again. Back at the same hostel, familiar crowd, hugs all around, and the same old Indomie stall outside. A stranger ropes me into a friendly political discussion as I wait for my food.

My final day in West Africa. I get my two tailored outfits back, and they fit like a glove after a few adjustments. Nana gives me probably the best haircut I’ve ever had in my life, and he did it with clippers, a razorblade, a comb and no scissors. I join a few people from the hostel to Kokrobite, a beach suburb of Accra about a half hour’s taxi ride away — other people are opening the windows of their taxi just to yell “Welcome!” at us. On my way back, a taxi driver gave me a long free ride to a junction because he couldn’t take me all the way to my destination. I find another taxi, bargain down to the best price-distance ratio I’ve ever gotten, and finally know my directions. 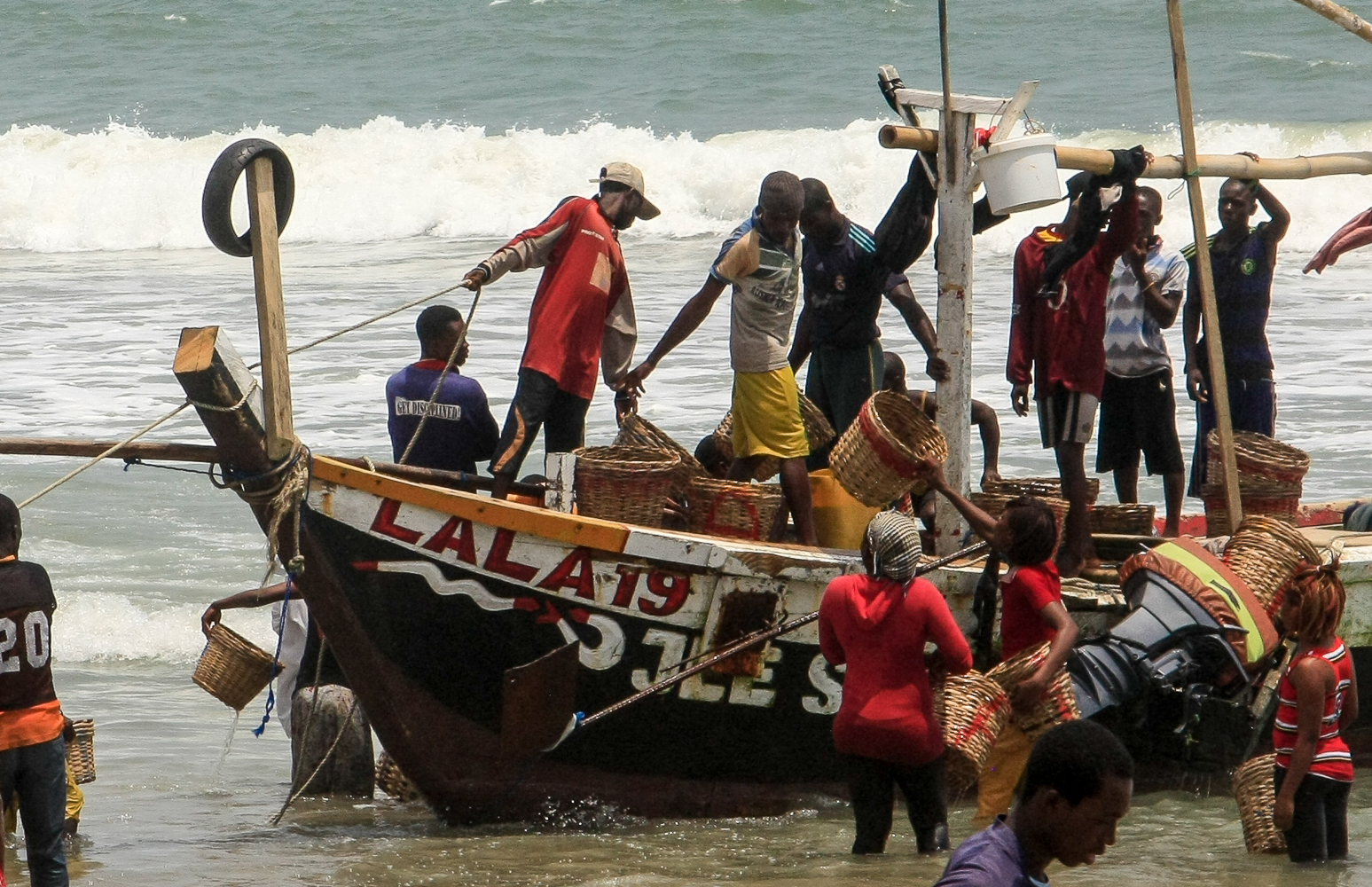 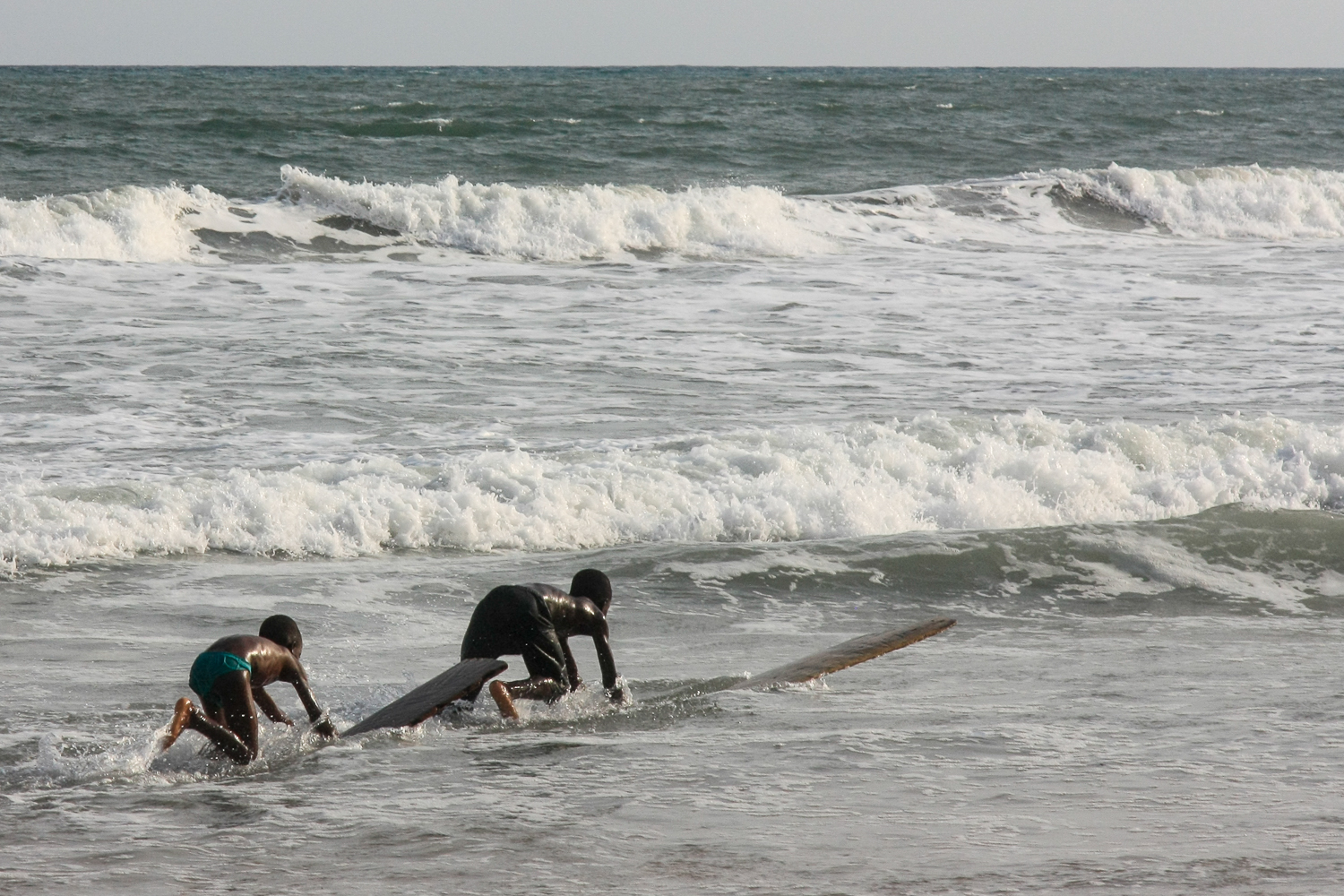 I couldn’t ask for a more perfect day. Even with two power outages at the internet cafes I hit. It felt like I finally properly adjusted to life and travel in West Africa, settled into a groove…and then it had to come to an end, before I could bask in it. Leaving felt like an evacuation, without time to let the feelings settle in. I meet my sister’s friend Max at the airport, after 3 missed connections over the month. We just got to know each other. And then I had to leave.

I woke up, got out, and felt immediately disoriented. I wasn’t surrounded by black people anymore. Honest statement there, that’s exactly what it was.

Rather…I had my good friends Flo and Marlies waiting for me! We had 3 hours to catch up over nearly 2 years.

Coming out of the airport, blue sky, no pollution, no honking, giant screens… A van with all that space in the back just for me, roads with no potholes, a pristine and well-preserved historic city… It was a lot to take in, and with nothing open at 7 am on a Sunday, eerily quiet. Being able to take pictures without accidentally offending anyone for once was a nice plus. But it all took a backseat to catching up with some good friends, and I’m all the happier for having that whirlwind of a layover. Amsterdam was nice and all, but seeing it wasn’t the purpose of the layover — I’ll have to give it a proper visit someday.

I’m pretty sure I nearly caused a traffic accident wearing my bright Ghanaian outfit in public, though. 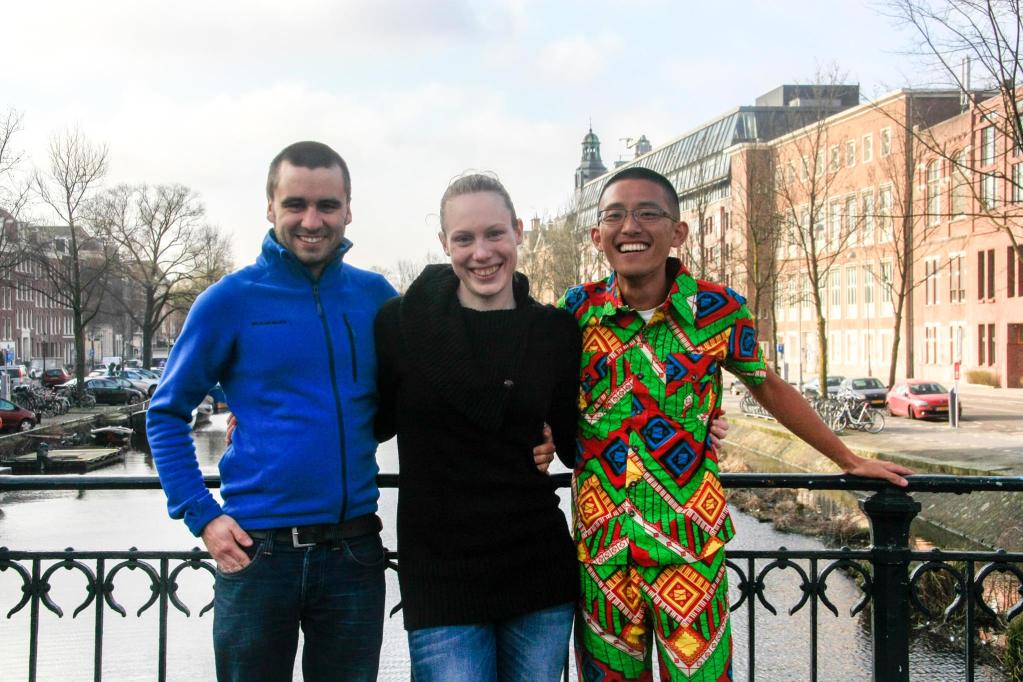 It’s been a month since I’ve returned home, as much time as I spent on the trip itself. The first week was just strange — waking up in my bed but thinking that the bed was a dream, that I’d wake up again in Accra or something. I had no transition period going back to work either, as I did a mere 16 hours after I landed from over two days of being on-the-go. I made readjusting more difficult than it should’ve been.

I started missing everything. I mean, some of it was just the feeling of travel — being on the back of a motorbike everyday, the feeling of being covered in sweat and dust. And some of it were things that originally exasperated me — the crowds and nonchalance in frequent power outages and sitting for hours in hot tro-tros and taxis waiting for passengers — glad as I am that I don’t have to endure that in Boston, experiencing it before made me a more patient person able to laugh things off. But there was still the spicy food, the colourful outfits everywhere, the hawkers, the loud and happy music (Ghanaian “al Qaeda” dance, anyone?), the jollof rice and Indomie and omelette sandwiches from the street. And of course, the people — friendly to engage and not in a hurry, a big contrast to the east coast life…

Even as the last physical reminders — the sunburns and mosquito bites — fade, West Africa continues to linger in my mind, and it’s not going away — it’s not letting me, and I’m not letting it either. I delivered Clementine’s tapioca flour and peanuts to her brother and his family, and now I’ve got a friend in Boston with a direct connection to Benin. I’m trying to arrange a badminton equipment export deal between China and Benin, and it might actually get somewhere. I’m reading books, searching for music, maintaining my French, going to far-flung corners of the city for a fufu, trying to find a local badminton court myself… They’re just little things and not even close to the real thing, but they keep the flame alive.

There’s really only one reason for all that though. I’m just setting myself up for when I go back!

One thought on “Adjustments”