I had little knowledge of Sri Lanka prior to arriving. A shame, I know — I always like to read up a little before I get somewhere, and I hadn’t really this time.

So imagine my surprise when I land in a gleaming airport, and on the one-hour ride into Colombo, passed mostly immaculate, new streets (unlike most of India, with actual sidewalks!) with smooth-moving traffic and minimal honking, with people laconically walking about not in dhotis and saris, but in Western clothing. Huh. Moral of the story? Don’t assume.

Well, there seems to be an explanation for the smooth roads and skyscrapers — all explained by the rather surprising number of Chinese signs we passed. Investment. Not unlike Benin in that regard, but something I imagine would cause a little tension with India, the rival regional superpower.

Arriving in the heart of the Pettah district, my new perspective was confounded yet again. Tight streets, traffic, Tamil everywhere — a little like India, but not. Liran and I walked from our hostel to the heart of the district and we were surrounded by commerce, Asia style — signs everywhere, with dedicated to one type of product (a clothes street, a tailors street, a belt street, a cell phone street, a household supplies street, and so on), hawkers laying their wares all over the street, shoppers everywhere bargaining, all the while dodging traffic and people dragging large carts. Strangely, it didn’t feel overwhelming, and it was fascinating to just absorb by walking around. 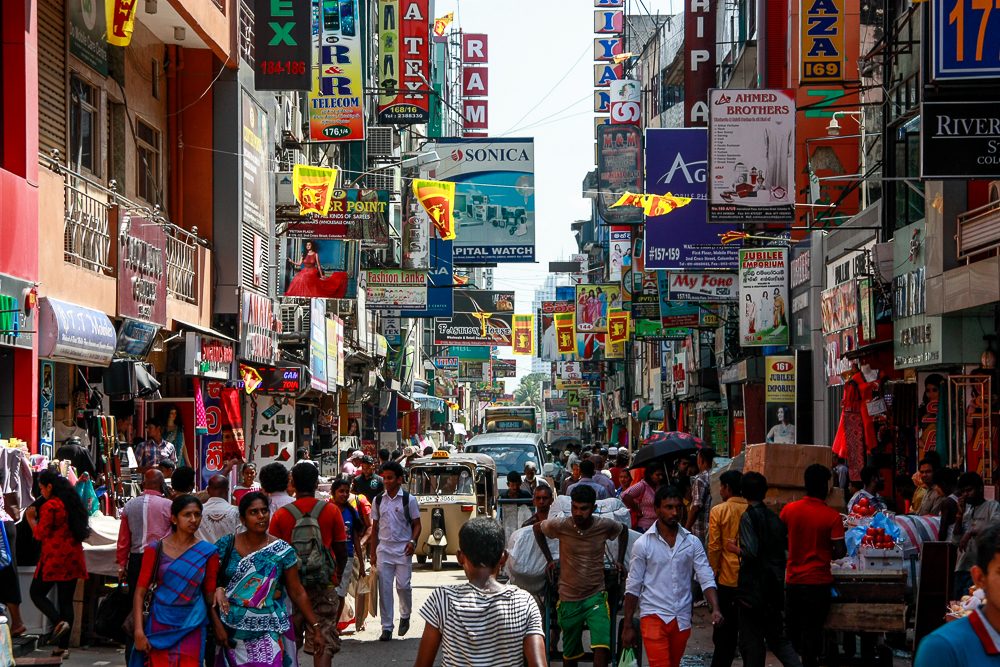 I think that sentence applies to all of Colombo. I admittedly came in with low expectations, expecting another city, but was pretty charmed by the vibe in general! We took in the Gangarama Buddhist temple, complete with its over-the-top hodge-podge collection of Buddhist artifacts; walked around the Viharamahadevi Park past all the canoodling couples in the shade; to Colombo City Hall, which looked not unlike the White House; Beira Lake, with its temple on the water and friendly vendors selling guava; and other odds and ends like a mosque here or a theatre there. 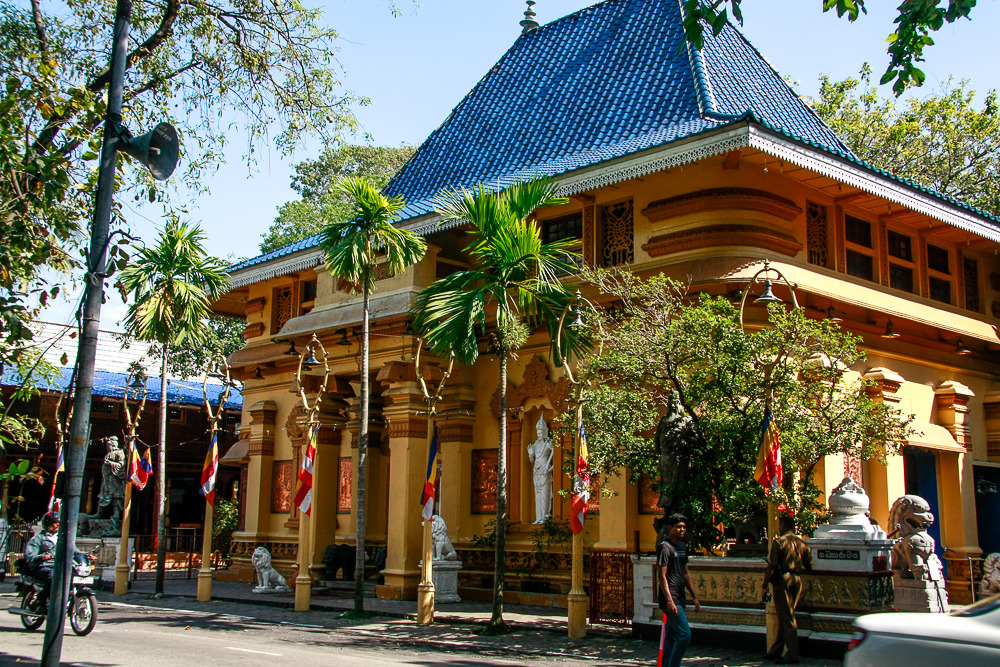 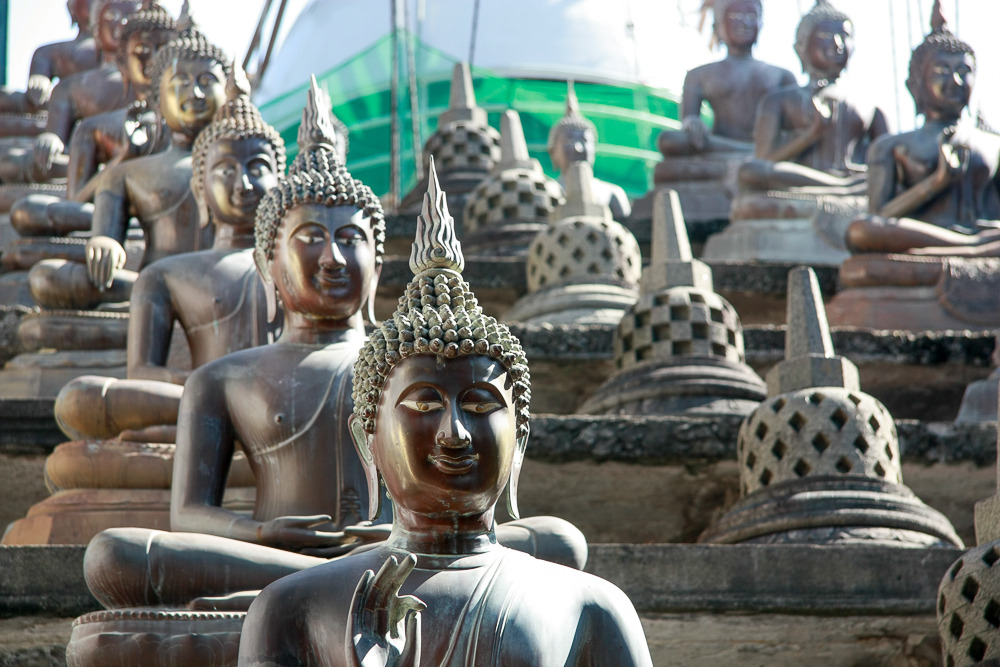 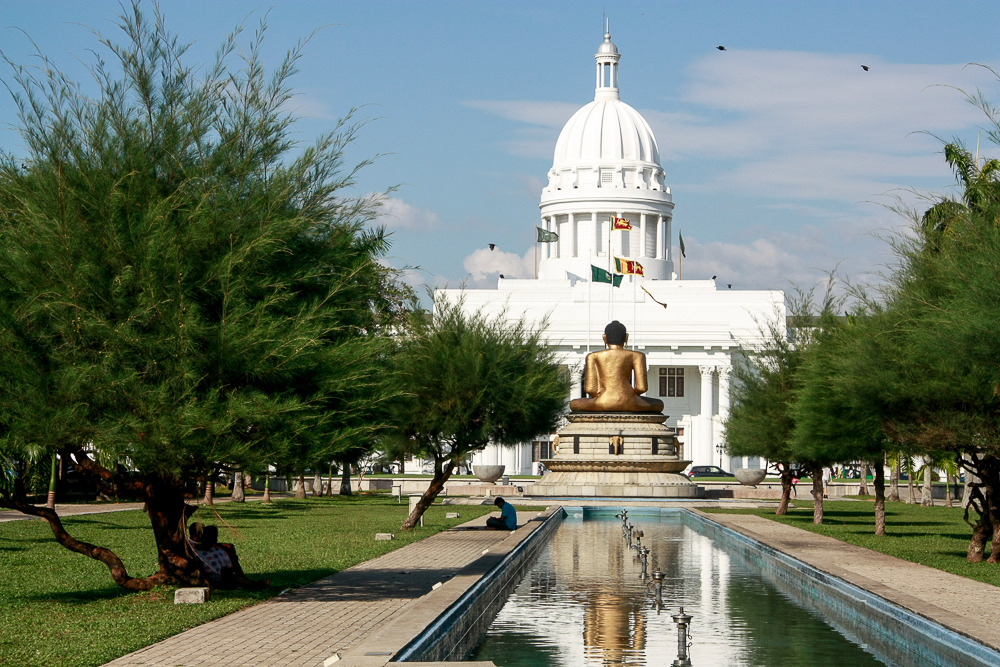 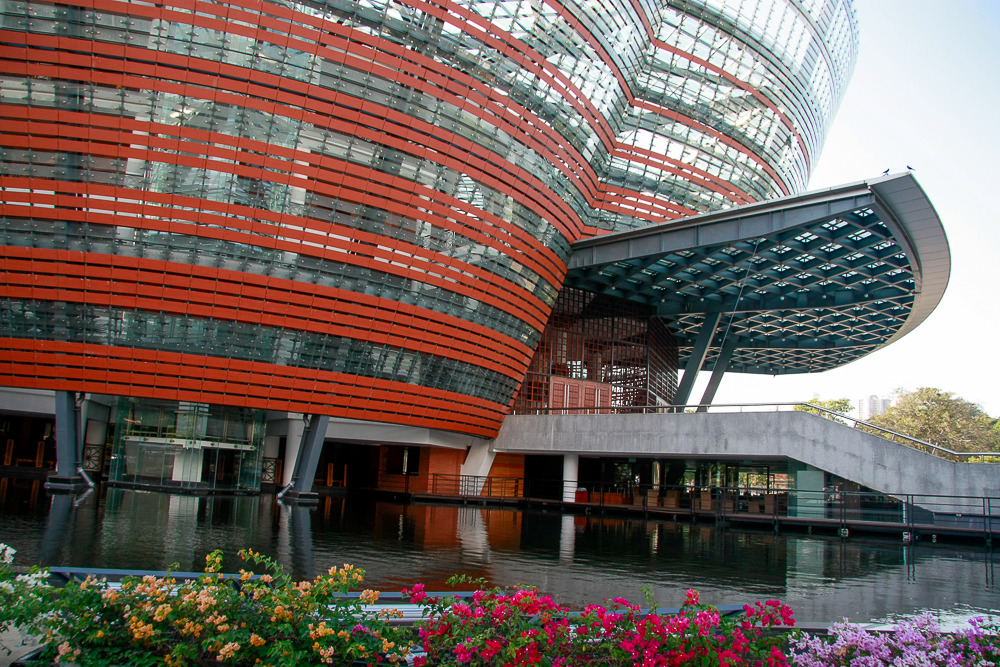 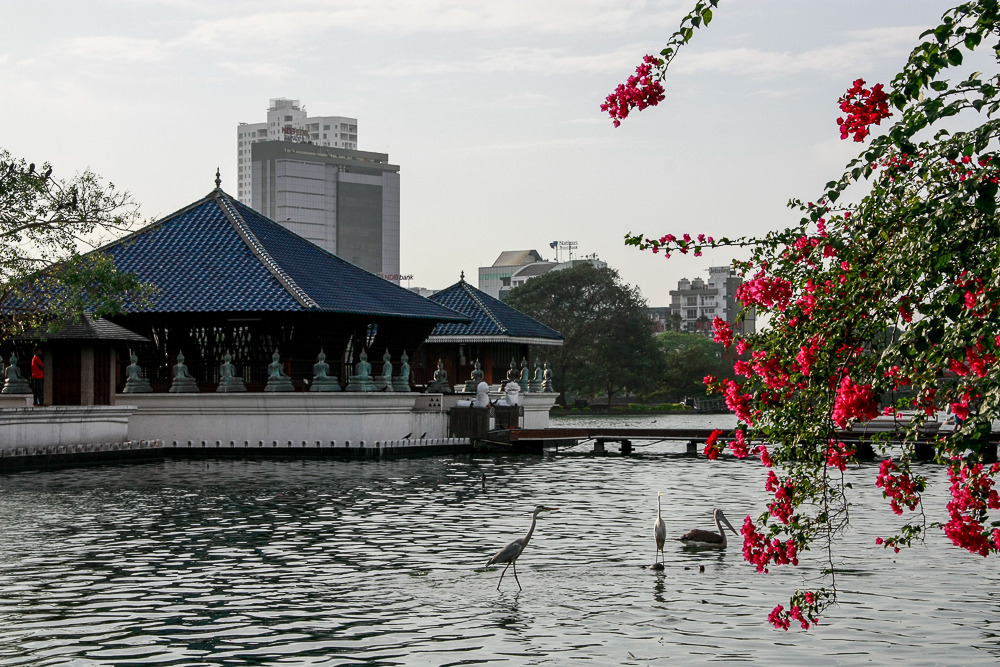 One thing did strike me as very different from India here — people seemed far more relaxed, and places were actually walkable (well, without having to worry about getting run over all the time). There’s a fair bit more free space around, and people actually take advantage of it with their leisure activities. 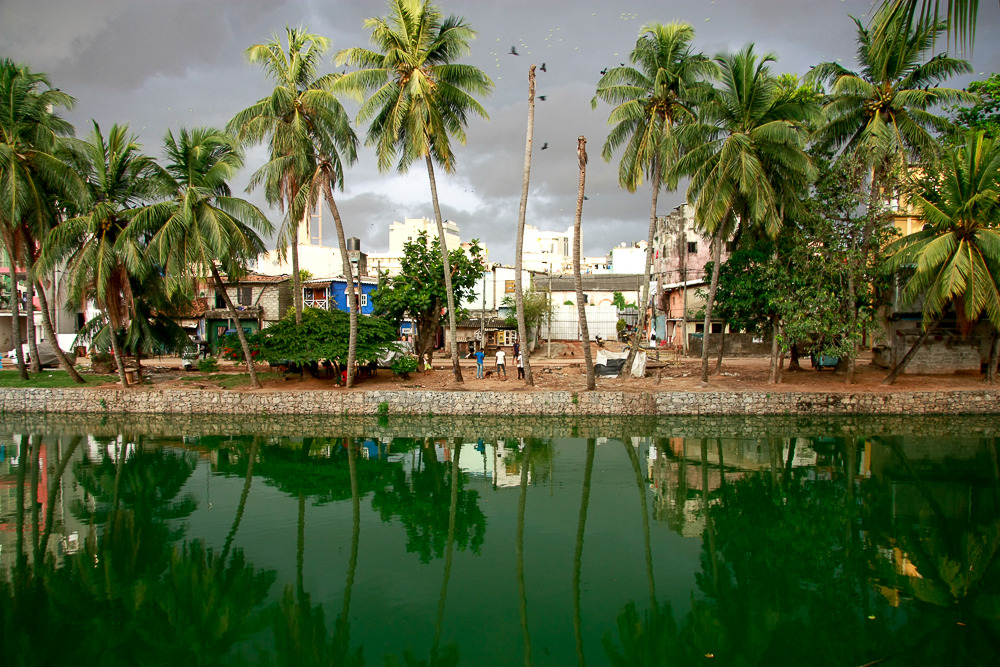 As our last stop in Colombo, we made our way to Galle Face Green, passing by an odd neighbourhood mixing downtown high rises on one side, and a canal and train tracks and shanty buildings on the other. The Green itself showed off Colombo at its best — with the sun setting, folks were out flying kites, playing cricket, couples walking around (in a far more publicly affectionate manner than in India), people milling about enjoying the comfortable temperature, and the gleaming new downtown looming in the distance. 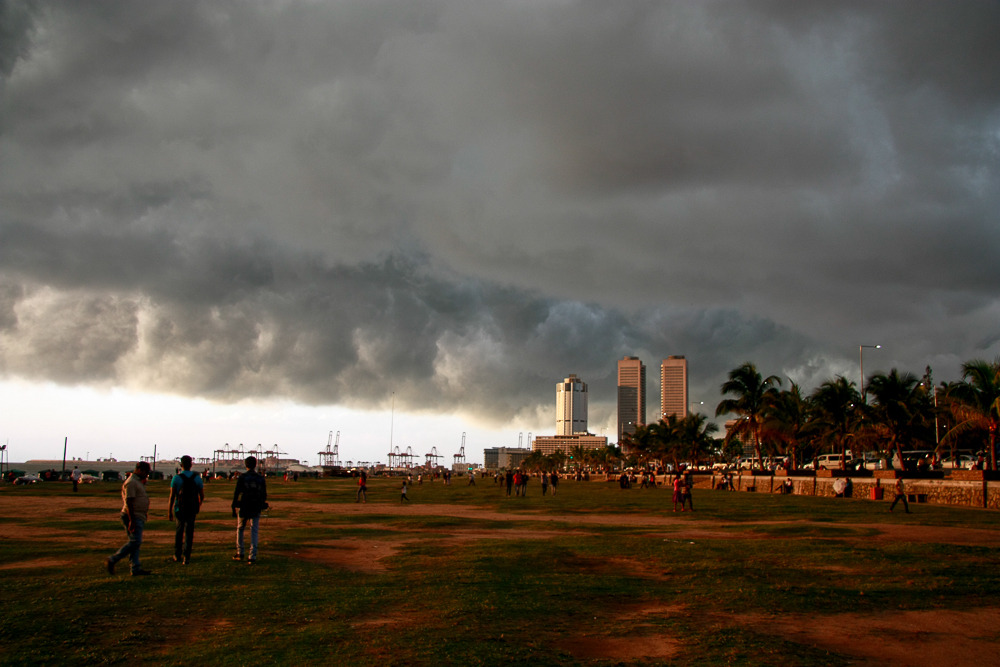 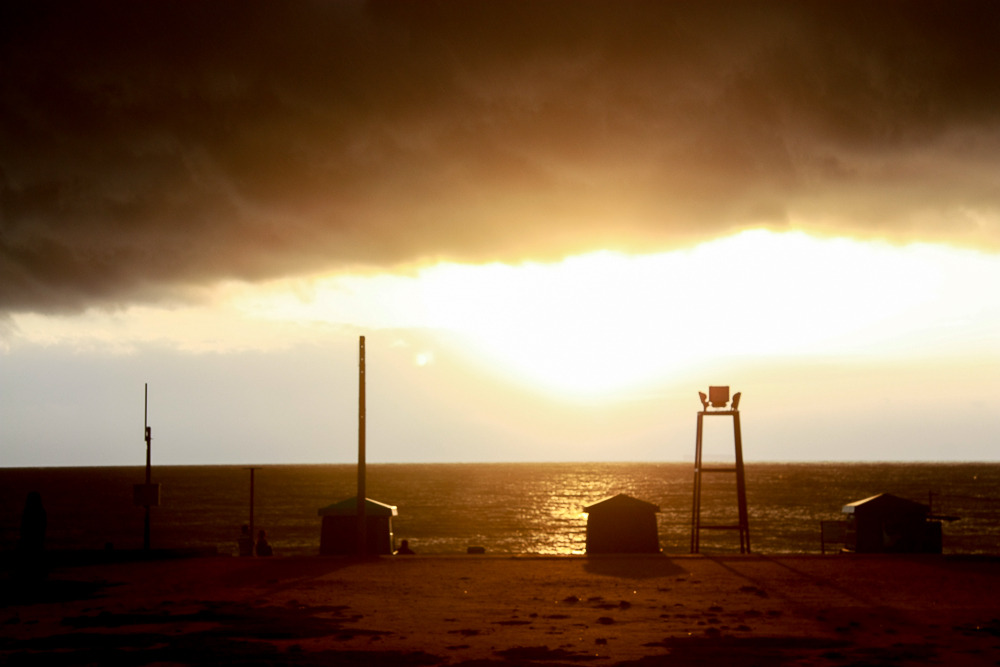 But then… all of a sudden, giant rainstorm. We sheltered ourselves at a food stall, huddled with a other bunch of locals and tourists. In the meantime though, I couldn’t resist, I had to get a kottu roti! Generally considered Sri Lanka’s national dish (despite the fact that its origins are from the Tamil Muslim minority), it’s a stir-fry of vegetables, eggs, and meat with chopped up roti (flat bread). It’s also the only Sri Lankan dish I’m familiar with and also love, but having only tried it at a fancy place in NYC years ago, this was the first time I got to see it prepared the real way — the chef holds two blades over his flat steel grill, rhythmically chopping the mix of roti and ingredients, pausing only to mix them together. It sounds like a demolition crew, and indeed, the clanging sounds of preparing kottu ring all throughout the streets of the country. Music to my ears! Better yet, the resulting food was more amazing than anticipated. 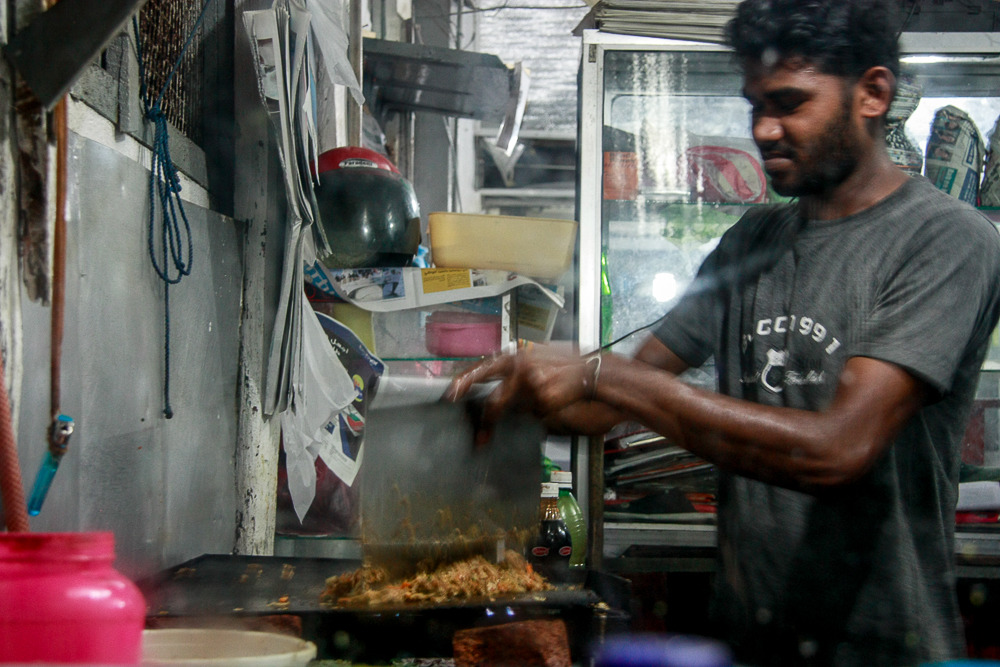 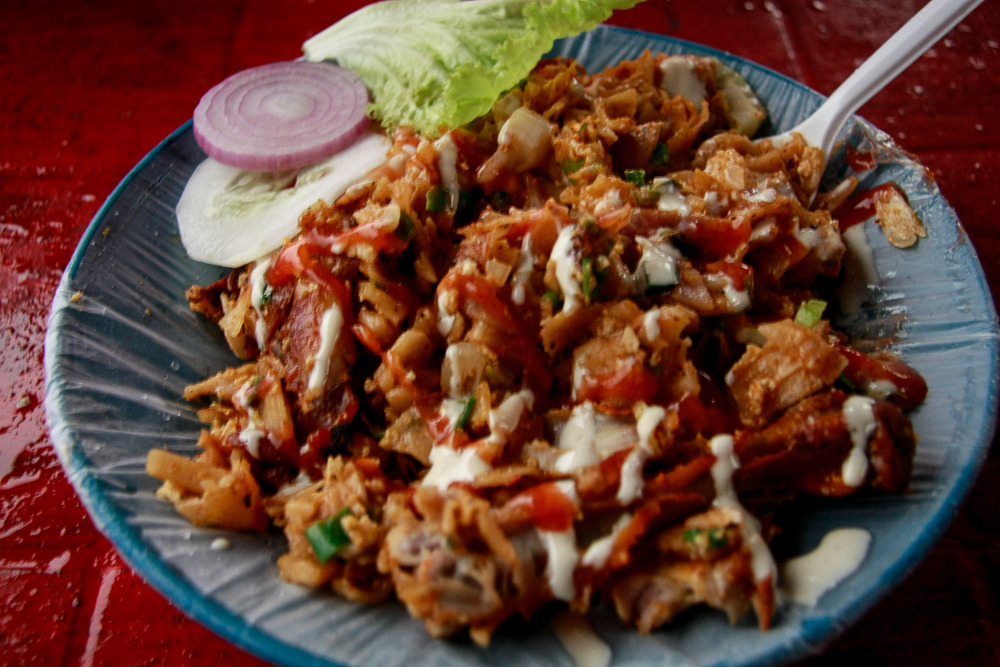 The rainstorm only intensified, and as the hours passed, everyone left the tent and ran out for further cover, save for Liran, me, Jenny and Kristof from Germany, and Wieke from the Netherlands. All of us had just arrived in Sri Lanka and were only in Colombo for a day, and all of us agreed that it was a much better city than its reputation suggested. After awhile, we resorted to people-watching — Liran pointed out a couple walking with an umbrella who seemed oddly un-handsy. First date? Second date? Ooohhh he bought her a drink! She’s leaning in closer now! Yeah, we’re creepy. 🙂

We capped off the night asking for beers. The proprietors — visibly devout Muslims, I should add — happily obliged. To our surprise, three of them crammed into a waiting tuk-tuk on the waterside boardwalk and zoomed off to a store in the rain, coming back 10 minutes later with five giant bottles for us and big smiles. We could only marvel at their dedication… and toasted to Sri Lanka. 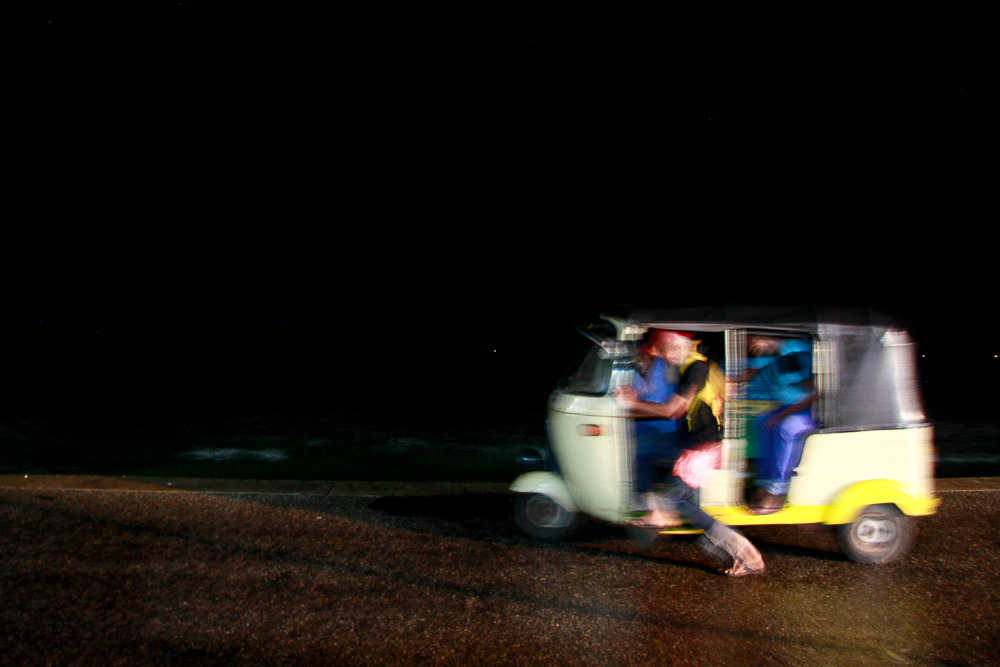