A mere 25 km from Newfoundland lies a geopolitical curiosity. Canada shares a border with the US, and a maritime border with Greenland, but did you know it also shares one with France?

Saint-Pierre-et-Miquelon is the lone remnant of New France in North America (all other properties, including Acadia, were relinquished in the Treaty of Paris after France lost the war with England in 1763), and is now an overseas collectivity of France. Sounds significant, right? Well, they’re two tiny islands. Specks on a map. They’re also only accessible through Canada, whether by flight or by ferry. Saint-Pierre, on the eponymous, smaller of the two islands, is the main town with a population of 6000. Miquelon, with its primarily deported-Acadian-descendant population, has about 500.

Coming here, unfortunately, is a big splurge, with passenger-only ferries at C$93 round trip for a very short distance from Newfoundland, and B&Bs the only accommodation option short of camping…somewhere? But still, with a rare opportunity to get there, I couldn’t resist! Neither could the many Newfoundlanders on the ferry, who were equally beguiled by the presence of France just a stone’s throw away, without the intercontinental flight.

After a one-hour trip in the fog (past one piddly looking iceberg), arriving was a bit of a head trip, as if we just teleported across the Atlantic. The French tricolour flies overhead in addition to SPM’s Basque-Normandy-Brittany-and-a-ship-for-good-measure flag, French is the only language present and few people speak English past a few words, buildings look nothing like Newfoundland’s, euros are the currency, and everyone lined up for customs and a passport stamp. I took several hours just wandering around the small town’s streets in disbelief, up and down the steep hill. Peugeots and Renaults and European Union license plates puttered by occasionally, past the colourful but densely packed houses, fishermans’ shacks, little bakeries, alleyways, restaurants, and shops — all closed on a Sunday. Nothing felt at all like Canada, and it was as if I was transported to a sleepy country town in France, with tiny, blink-and-miss-it reminders of its setting in North America (a Rona hardware store here, a Boston Bruins bumper sticker there).

But still… it was eerily quiet, even for a Sunday. What was going on?

My visit happened to land on the last day of the Fête Basque, a celebration of Basque culture. I wandered over to an outdoor court, where some matches were going on with a small crowd of local onlookers. It looked a little like racquetball, but with small wooden paddles and teams of two. Not understanding what was going on, I turned to one of the many men dressed in Basque colours, replete with scarf and beret, and just asked.

Turns out Philippe was one of the event organisers and a pelote trainer! Warm and friendly, he proceeded to give me an hour long (in French) explanation of the sport, taking me in past an “entree interdit” sign into the training building, showing me photos, an indoor court, and all their equipment. The matches going out outside involved the local champions, in addition to players from France and the Basque country, and apparently I had just missed all the good stuff, because the day before and the morning just prior to my arrival, they had some far more raucous events, including a tug of war, rope tows of a fire truck and a stone that must weigh over a thousand pounds, dancing, a parade…and a whole lot of drinking.

Well, hangover. That definitely explains the empty streets. I stayed for a few matches, took in some Basque music on the street, had myself a very affordable yet beyond amazing seafood matelote (a stew that had like 4 pieces of fish and 4 scallops, in addition to being giant) at a restaurant, and called it a night.

After a lovely (homemade bakeapple jam!) but stress-inducing breakfast (translating between Newfoundlander English and French, both of which I have equally mediocre comprehension of, for other guests and the host of the B&B), I had just the morning to spend before my ferry back to Canada. Taking a tip from French/Quebecoise couple Camille and Gabrielle from my B&B who simply described it as “magique”, I walked down to the docks and took a 10-minute boat trip to l’Île aux Marins — a trip that cost only €6 round trip, despite being the only passenger on a large, converted fishing boat.

Soooo I ended up stuck on an island, in dense fog, completely alone after the boat dropped me off and left, for about an hour and a half. Île aux Marins is a tiny island and also a ghost town. Wandering past the abandoned buildings (none of which were open until tour groups came in the afternoon) through fields of tall grass and fog-soaked cobwebs did indeed feel like “magique”, a dreamlike, bygone-era, French coastal countryside — though after getting completely soaked from walking an hour in the wet grass, shivering alone on the dock waiting and waiting for the boat to return and pick me up (again, with no other passengers getting on or off) did threaten to bring me back to reality. At least the boatmen didn’t forget about me! 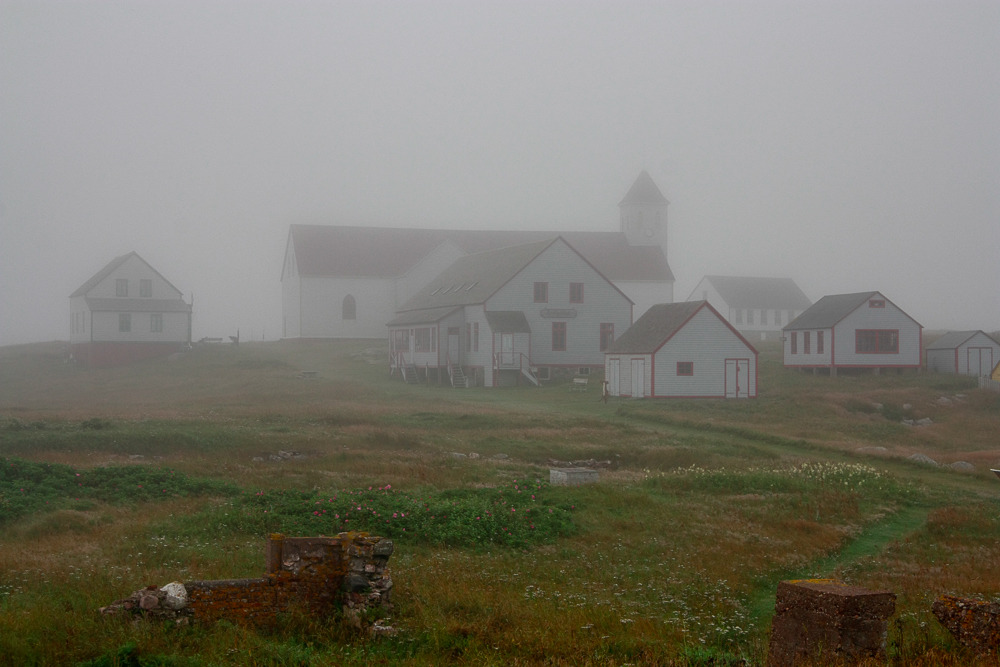 The town began to wake up rather late for a Monday morning. Wine shops selling French wines for merely a couple of euros, little corner stores stocked full of imported French products, clothing stores selling plenty of striped shirts and berets… but ah, I came for the bakeries. I helped myself to an incredibly delicious almond-apple tart, then ran into Camille and Gabrielle again, who treated me to a wonderful quiche over lunch (where I really had to stretch my French to keep up). Camille — a little indignant about not getting a passport stamp because he carried a French passport — could not get over how much of a time warp it felt like, with the local St-Pierrais speaking country-bumpkin French circa 19th century, yet also how it was seriously just modern-day small-town France. Right there, a hop-skip away from Canada yet way across the Atlantic from France.

Then the ferry back, complete with Canada customs form and re-entry, my rental car, and a four hour drive ahead. It wasn’t a dream, was it?

Ends of the earth (or just Europe) #portugal