The bus ride from Addis to Bahir Dar felt like going through different countries. Out of the hustle and bustle of the city, we passed through green pastures and farmland, zigzagged up and down some mountain switchbacks and canyons, and passed through tons of little villages. And in between it all, there’s a lot of walking. Children walking through some hills or along the road to and from school. Women walking way out to and from a group congregated around a well, while carrying buckets or jugs. Farmers herding their animals along the road. It’s peaceful out there. 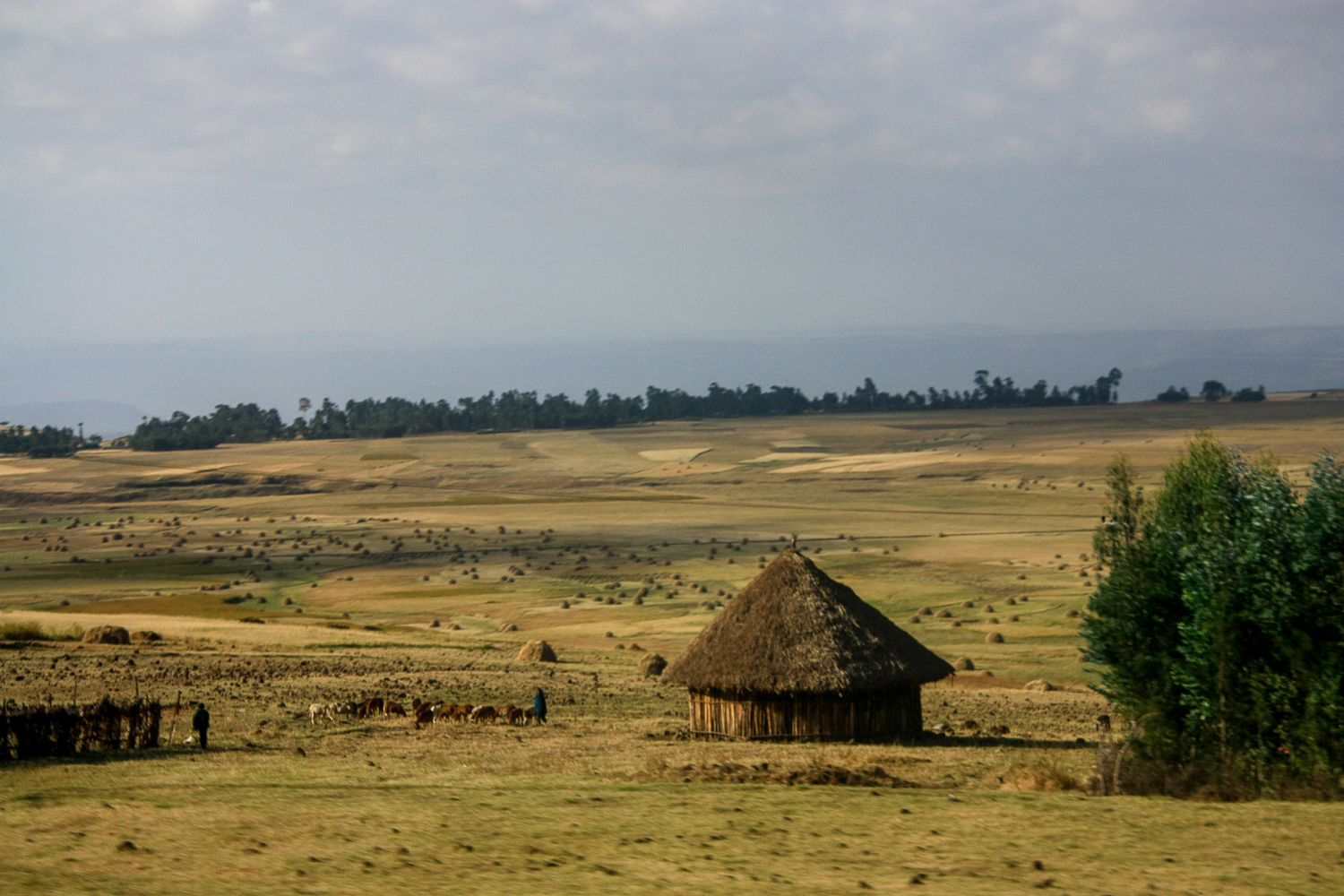 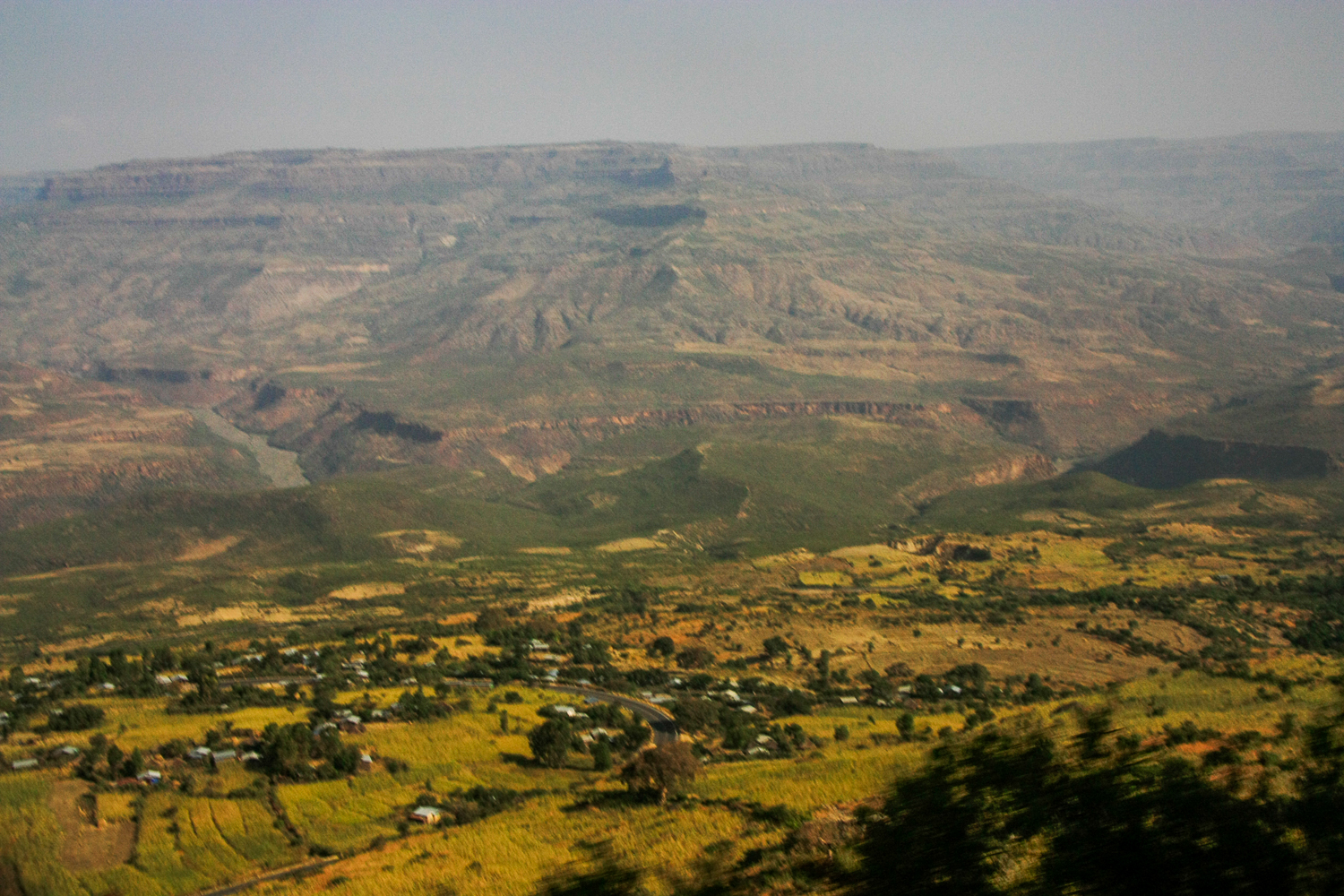 And then you actually get to Bahir Dar. No more mountains, no more pastures: it’s all about the lake and the palm trees. Like Ethiopia’s version of a tropical resort destination, plopped in between the mountains. This is a place where Ethiopians come to relax. Sit on an outdoor terrace and drink coffee or beer, walk along the lakeshore, hit up the local church (seriously)… And while there were a few Western tourists in town with me, those going on tours and buying souvenirs were the Ethiopian visitors. I love seeing domestic tourism, I really do! 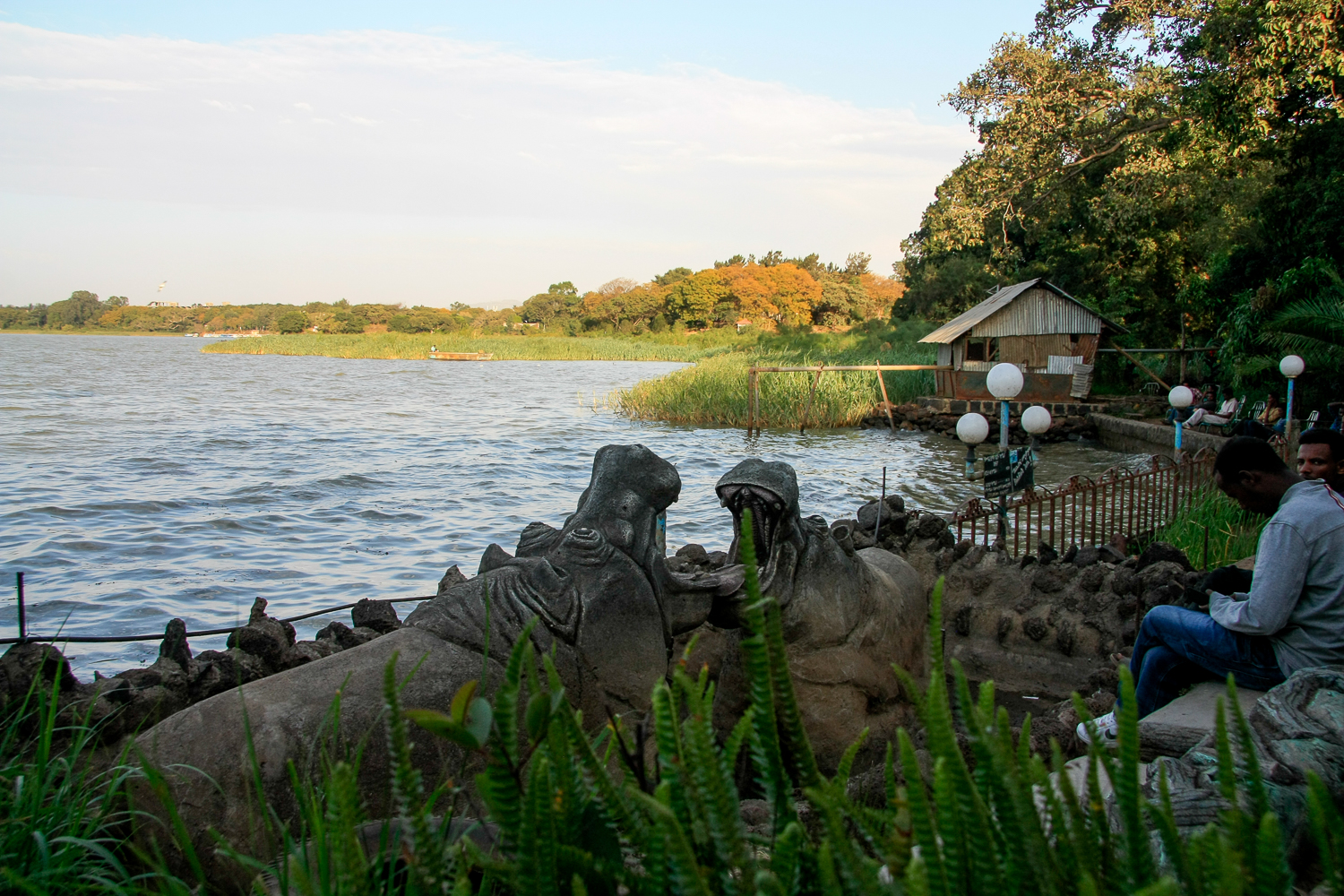 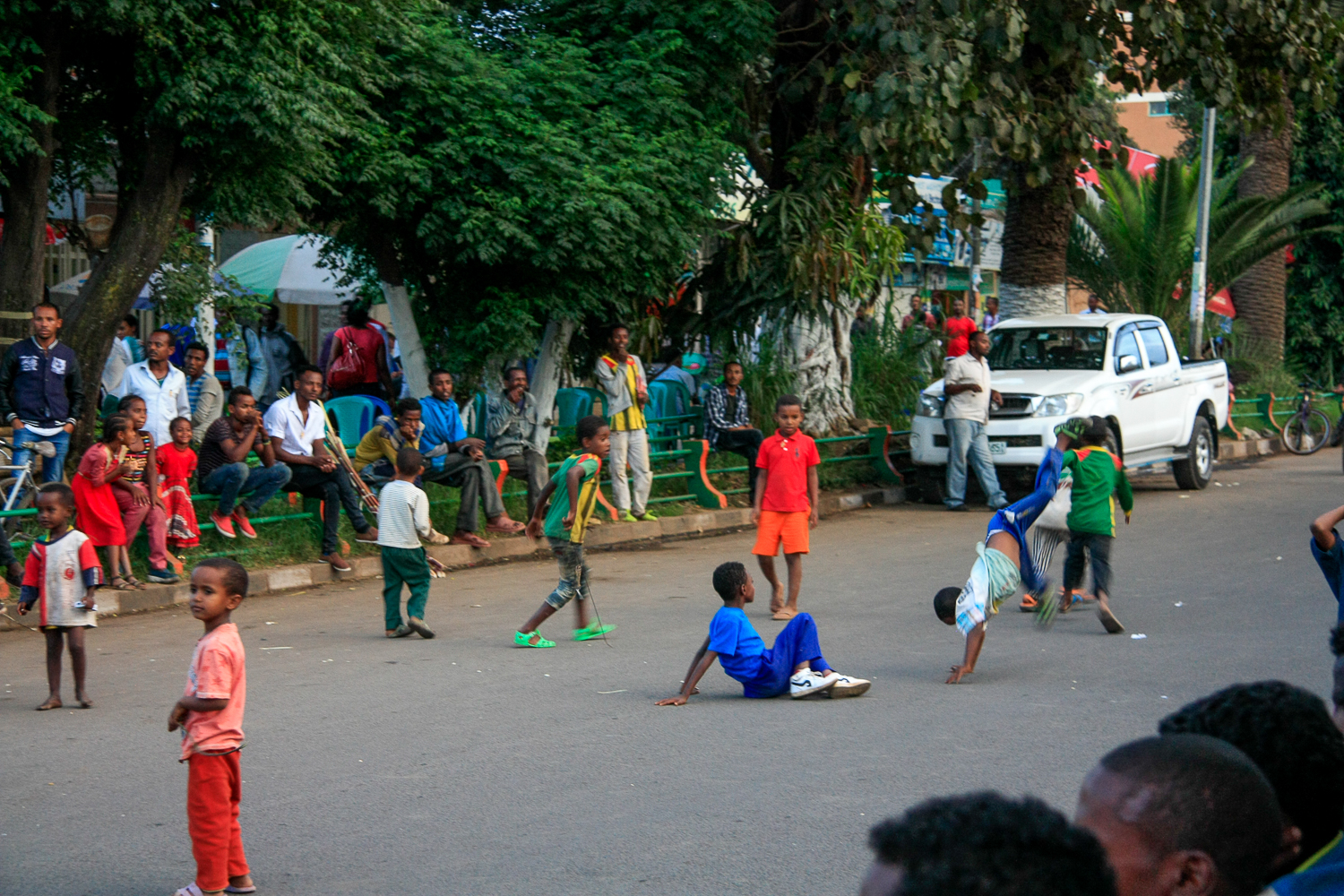 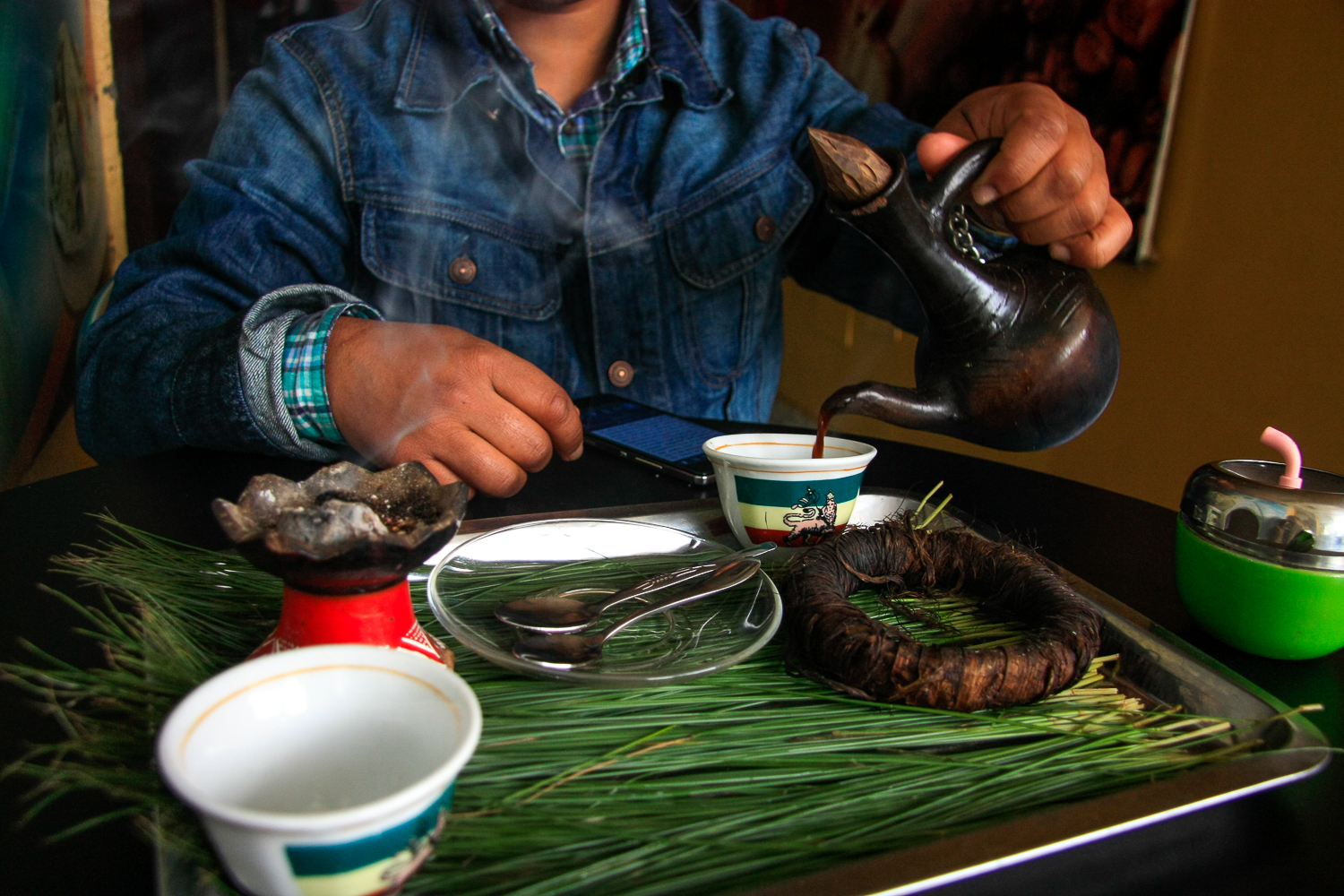 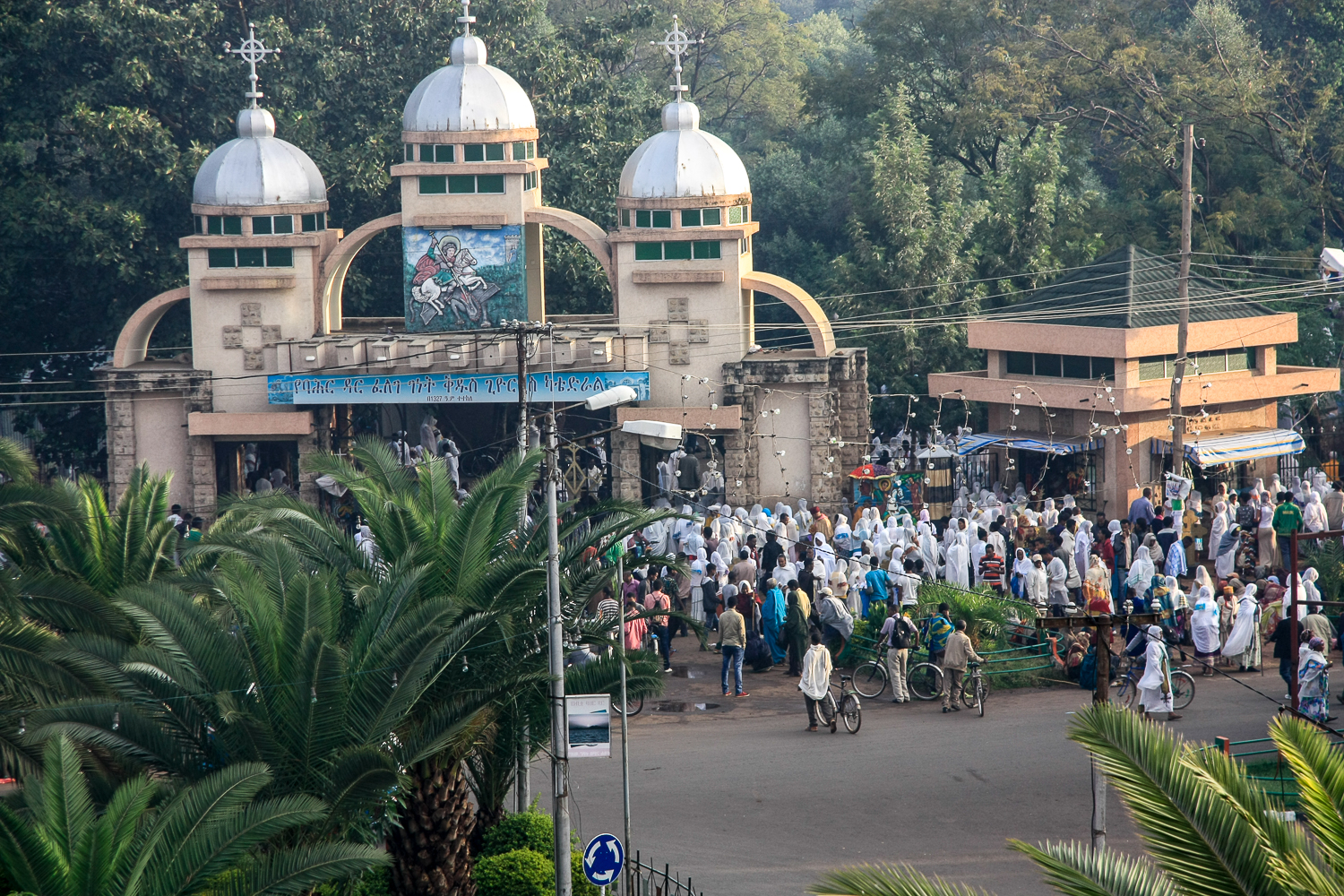 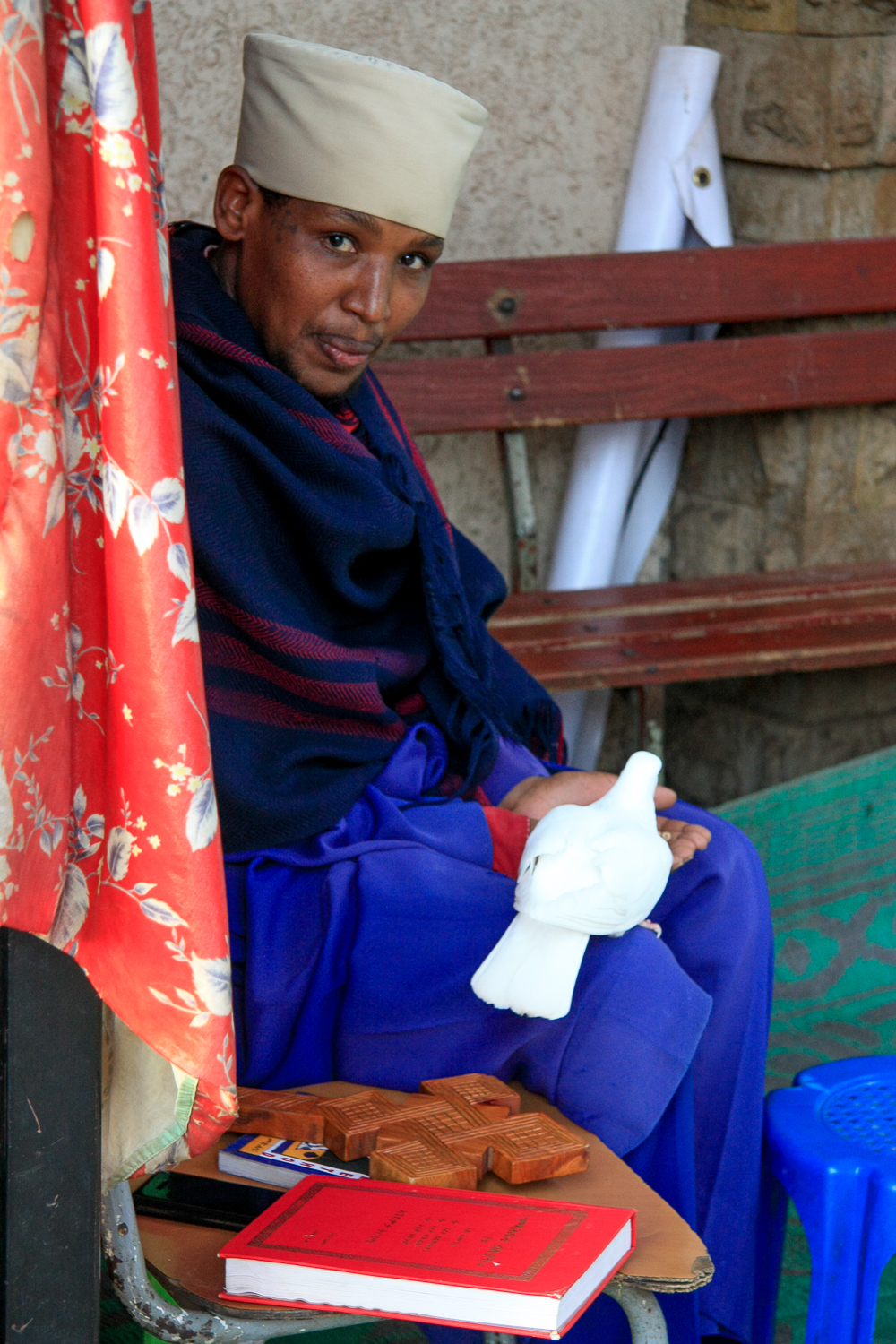 I met Befekadu, an Ethiopian studying in Finland, on the bus, and we joined up for a few days. Visiting home for the first time in several few years, he’s never been outside of Addis in his country. Seeing the countryside was a novelty to him, as were the Lake Tana monasteries.

We joined a boat tour (with a few foreigners, but mostly Ethiopian tourists), passing by pelicans fishermen on these incredibly ancient papyrus boats on the lake, and checked out a few of the monasteries, namely Bet Maryam and Azuwa Maryam (the Ethiopian transliteration of Mary). For the Ethiopians, it was a site of pilgrimage: some prostrated themselves immediately at the door of each monastery, others made the sign of the cross a few times, and all went up to the monk to be blessed with the Ethiopian Orthodox cross all monks carry in their right hand, and received a bit of sacred soil from the monastery grounds, to be used for healing whenever they need it. After taking off our shoes at the separate entrances for men and women, we all marvelled at the religious art inside.

Practically all monasteries have the some of the same depictions of Jesus’ birth, life, and death. Where it gets interesting is with what comes after! Petros (St. Peter) being crucified upside down. There’s Giyorgis (St. George) killing a serpent, and…dying by being impaled at the legs, shoulders, and head by what looks like a giant pitchfork? And then there’s the story of the cannibal Belai, who ate 73 people but was taken up to heaven after Maryam saw Belai give water to a poor man and asked God to forgive him. Lots of stories I’ve never heard of, but the monks were happy to explain and Befekadu and others happy to translate. 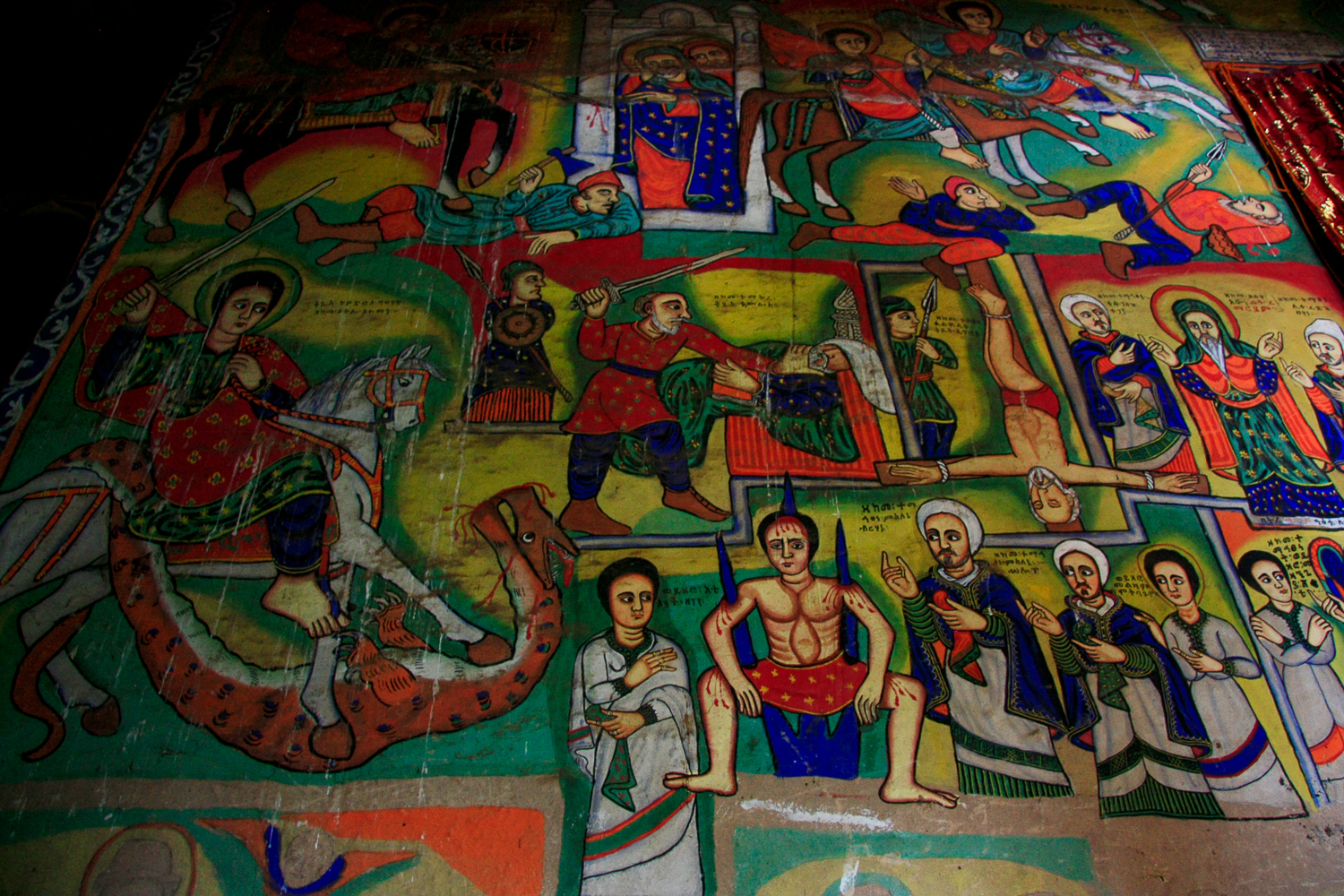 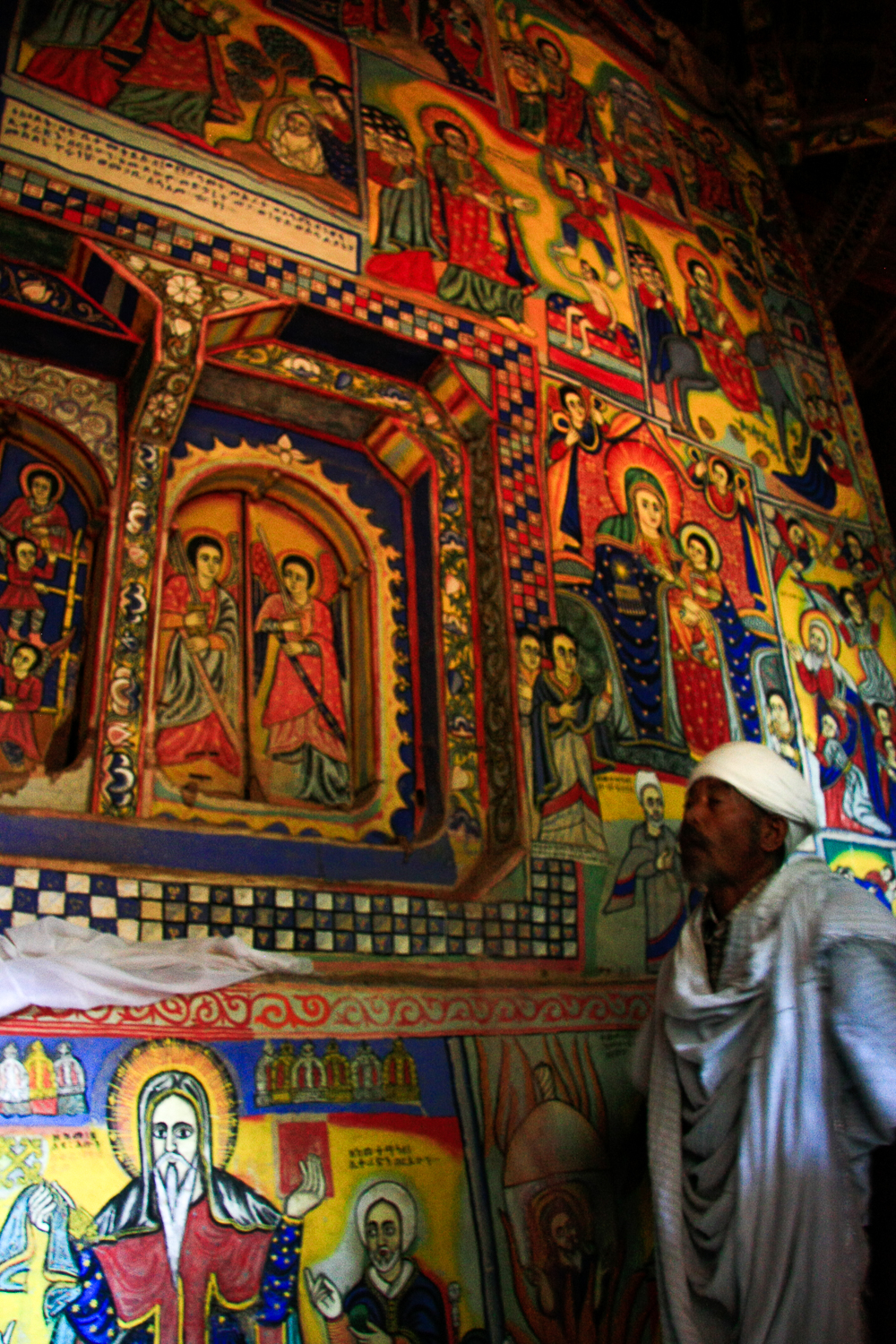 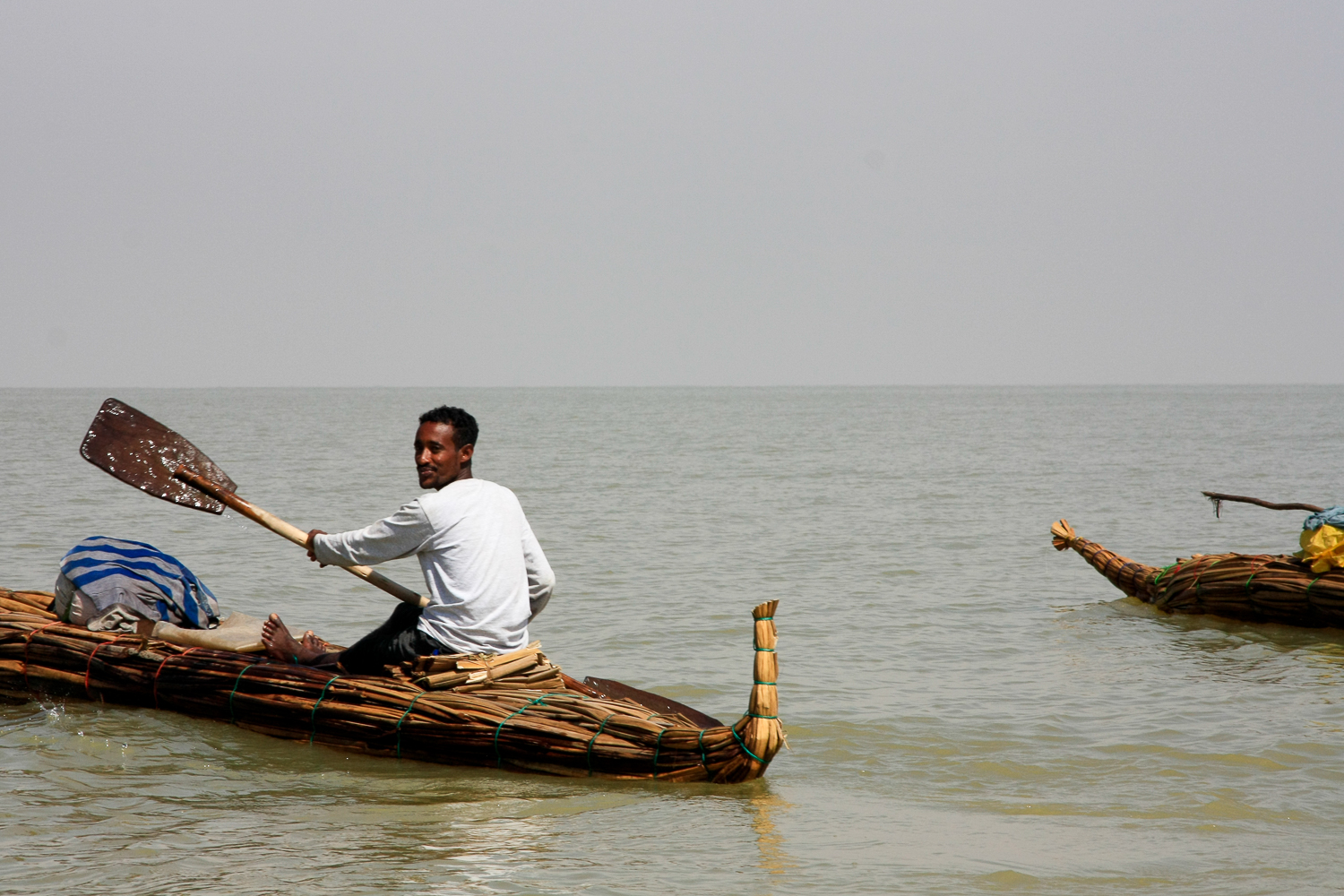 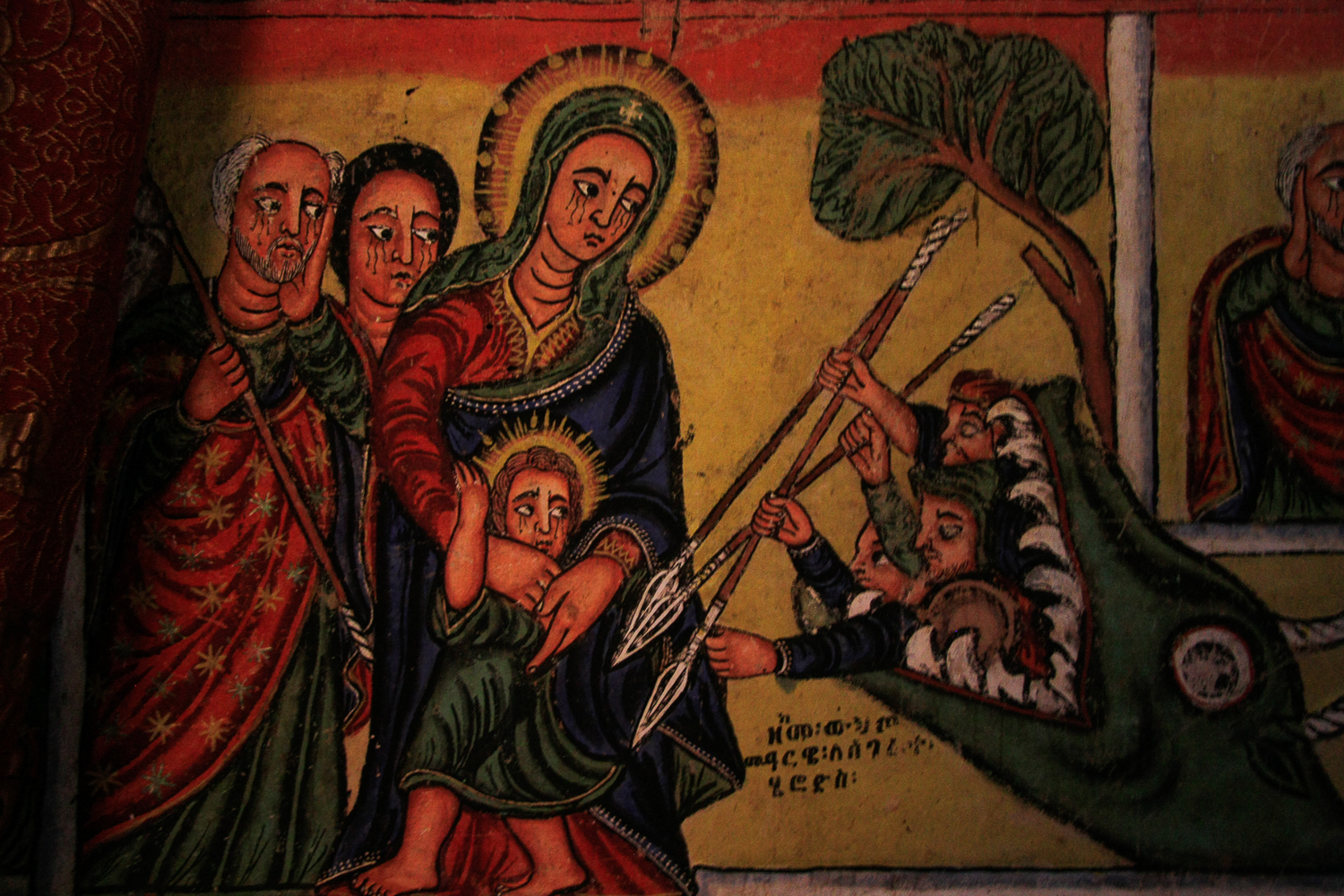 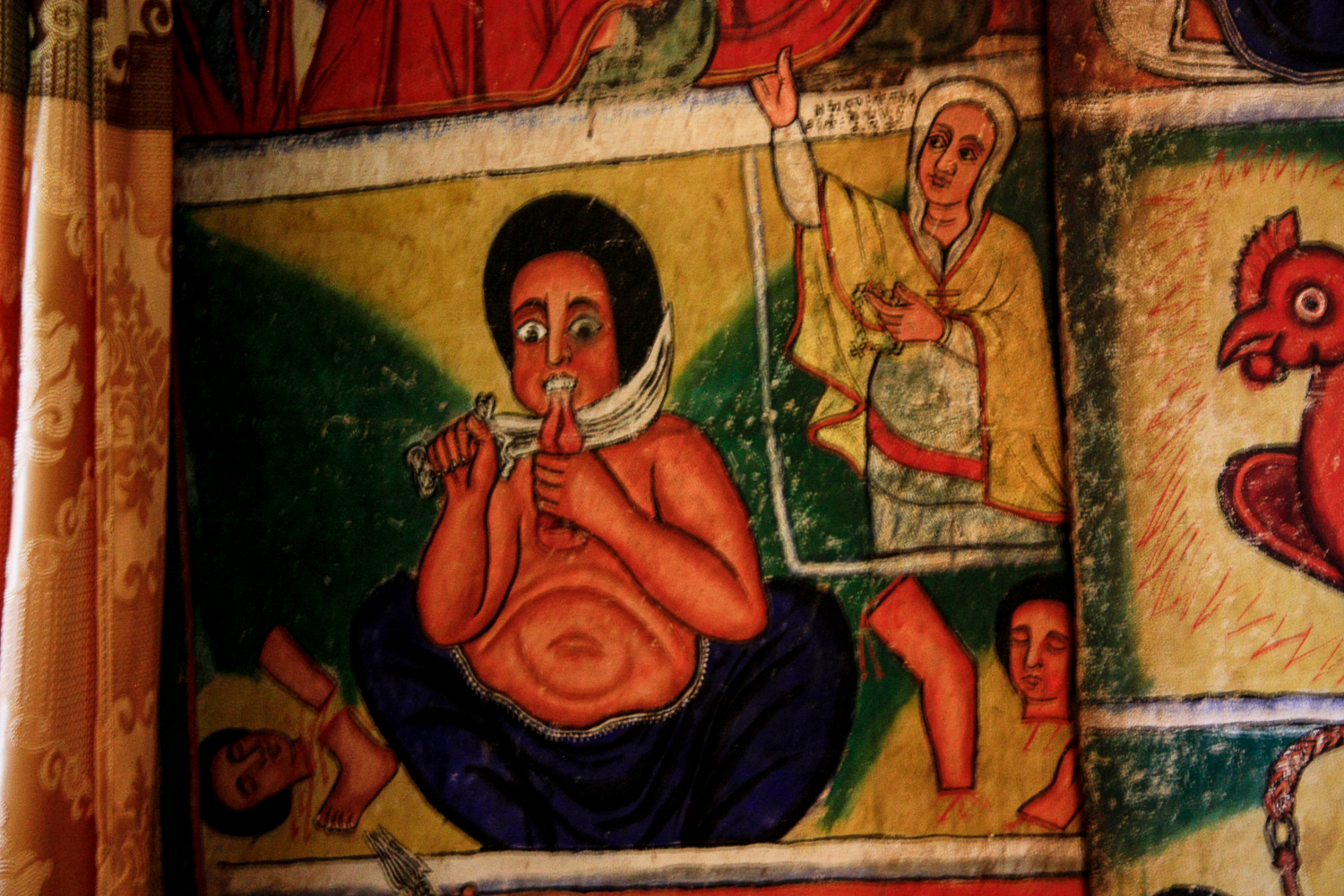 These monasteries were built in the 14th century, and some of them have artifacts over 1000 years old, like sheepskin hymn books or Bibles in Ge’ez (the archaic predecessor language of Amharic). I honestly can’t believe we were all allowed to touch them, and we all did upon insistence of the monks.

One of the monasteries had a little annex for future monks in training, chanting out prayers. Who pulled out the cameras for selfies with the pious students? The Ethiopian tourists! I’ve been so entrained to keep my camera in the bag when it comes to photographing people, but hey, if the locals do it… 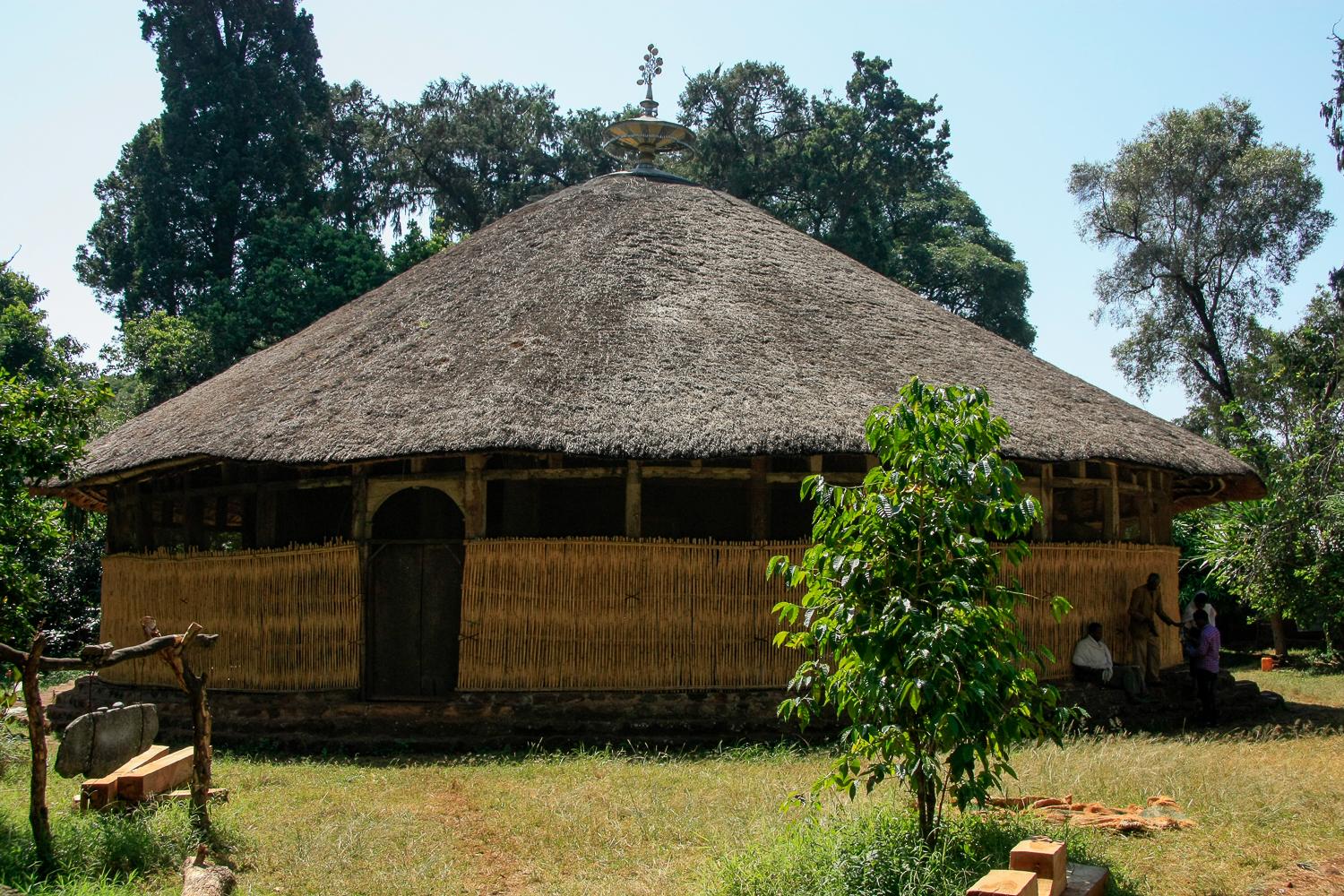 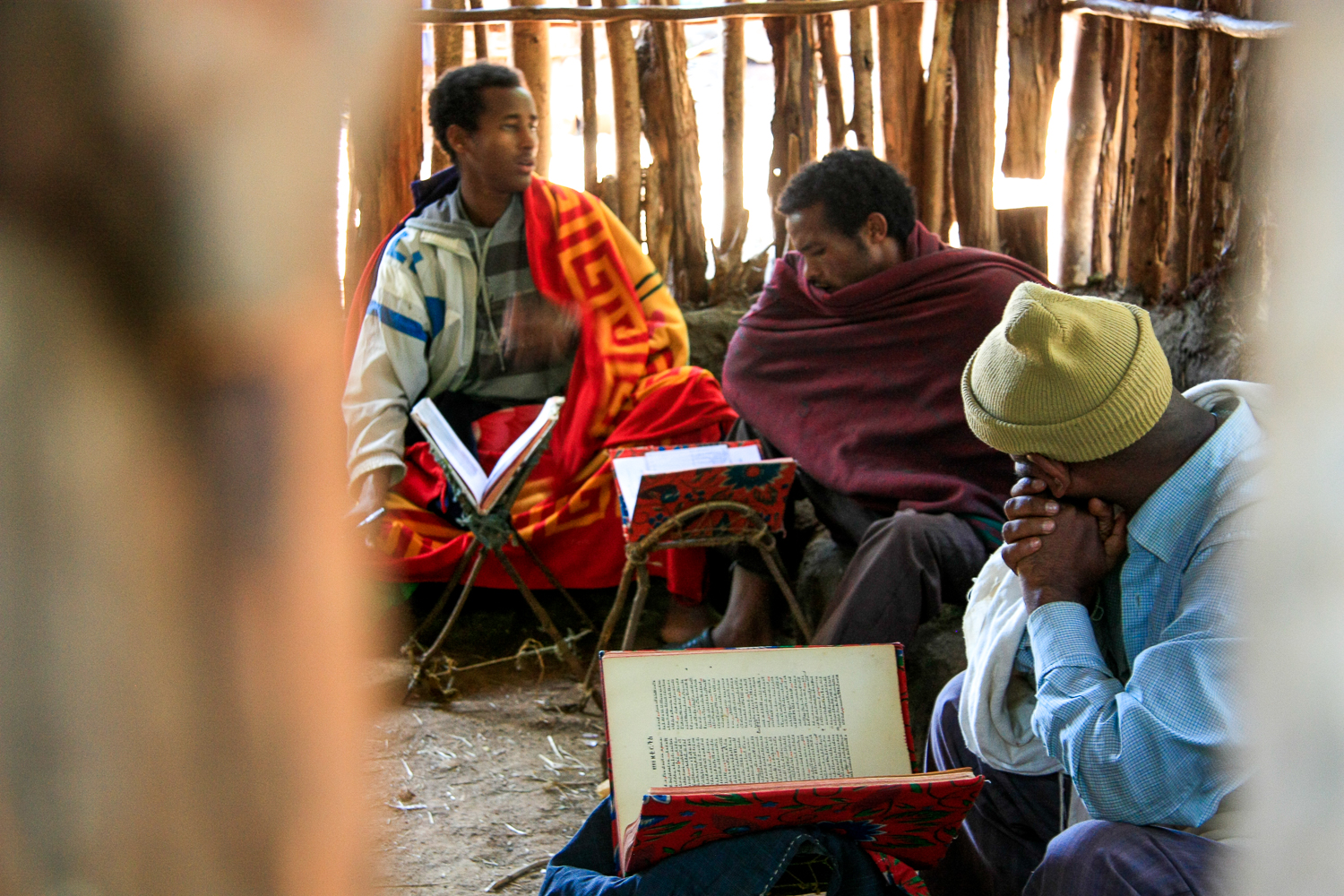 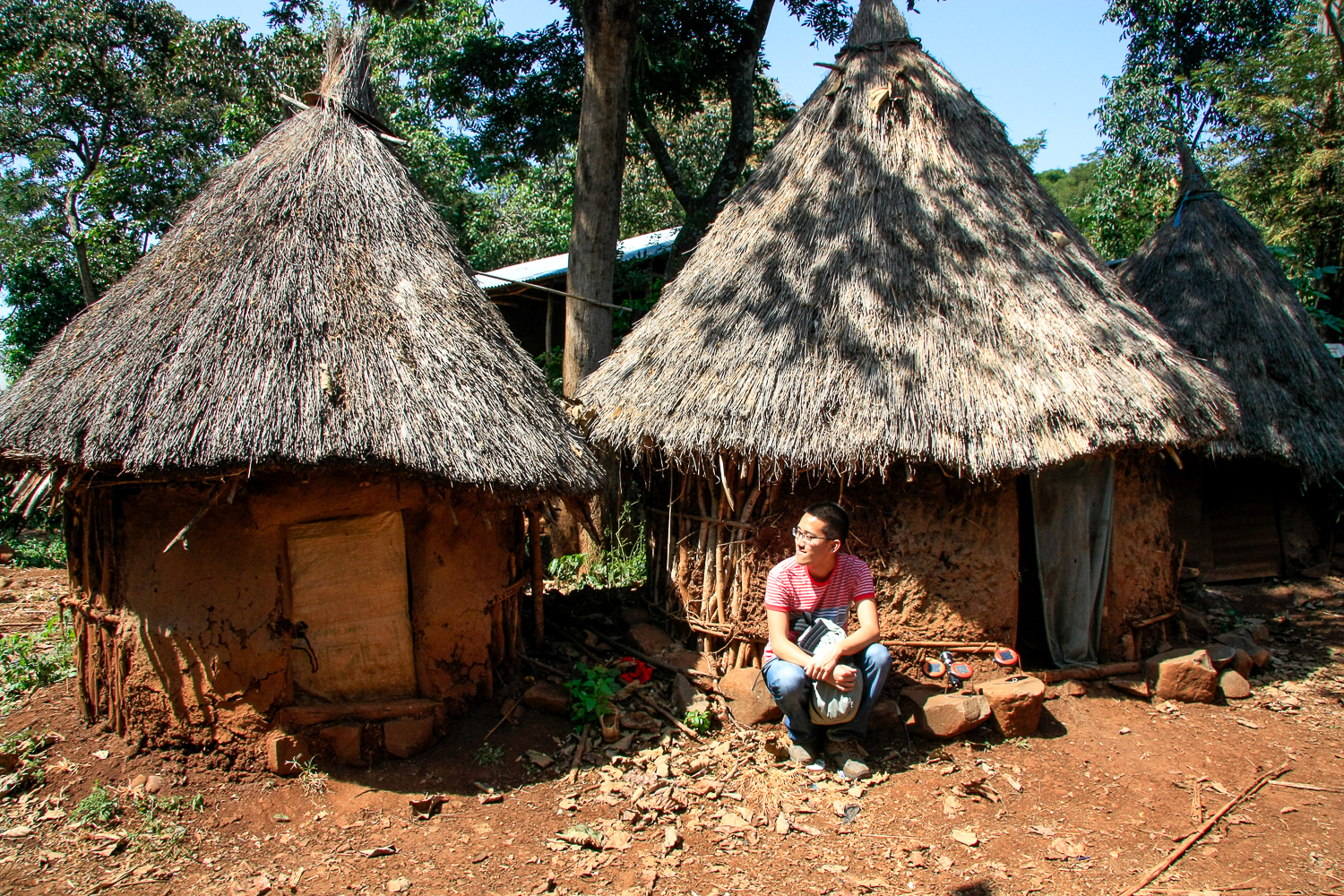 Our tour continued and took us to the Blue Nile Falls, a long and bumpy ride away from Bahir Dar, passing through plenty of agrarian communities and sugarcane plantations. As impressive as the falls (which have been reduced due to the construction of a dam) were, arriving at the nearest village and walking to the falls from there in the late afternoon, when kids were walking home from school and the locals buzzing around, turned out to be just as if not more rewarding. And who took pictures of and selfies with all the little kids and crafters? The Ethiopian tourists, of course! It’s a world away from the city life they know. 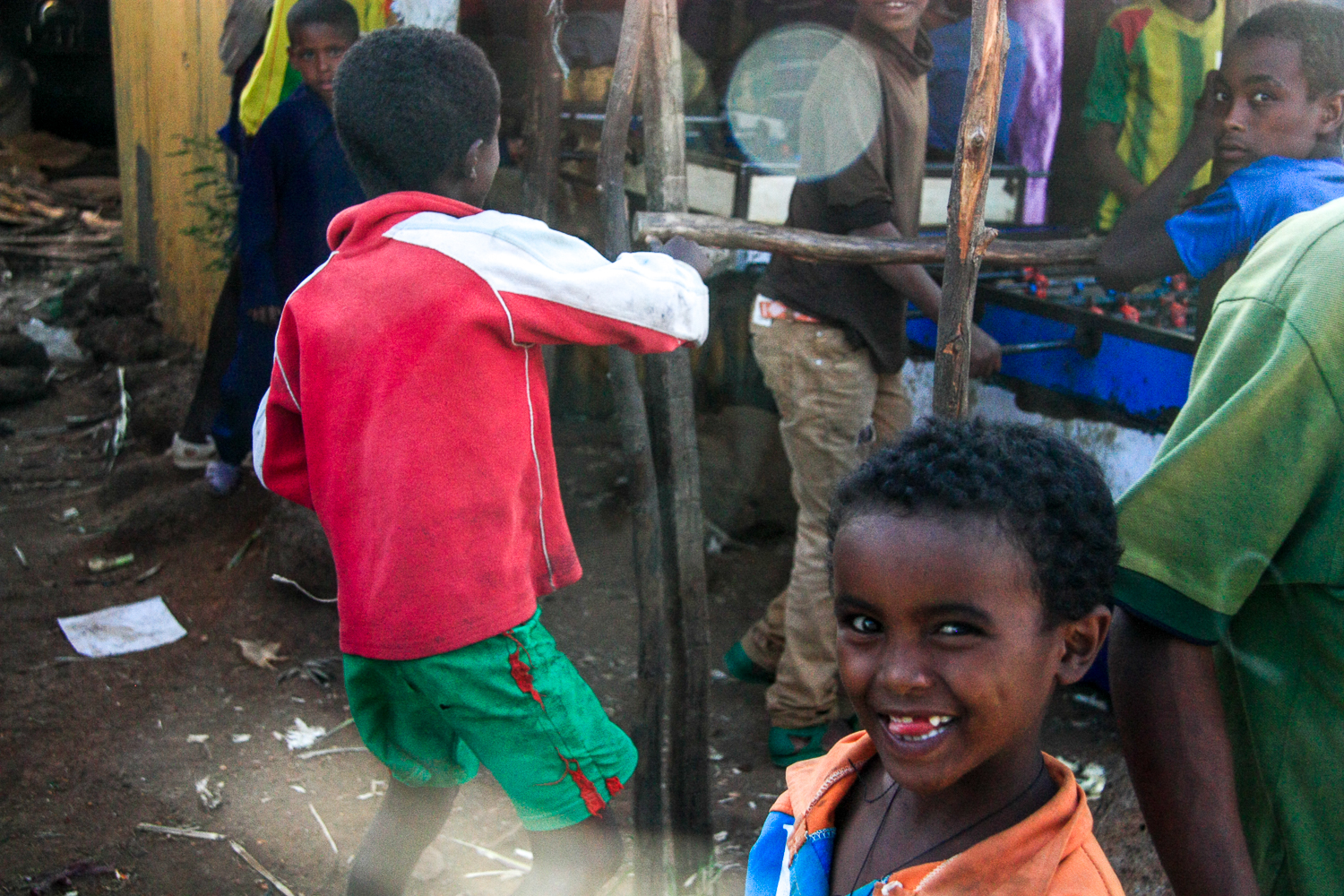 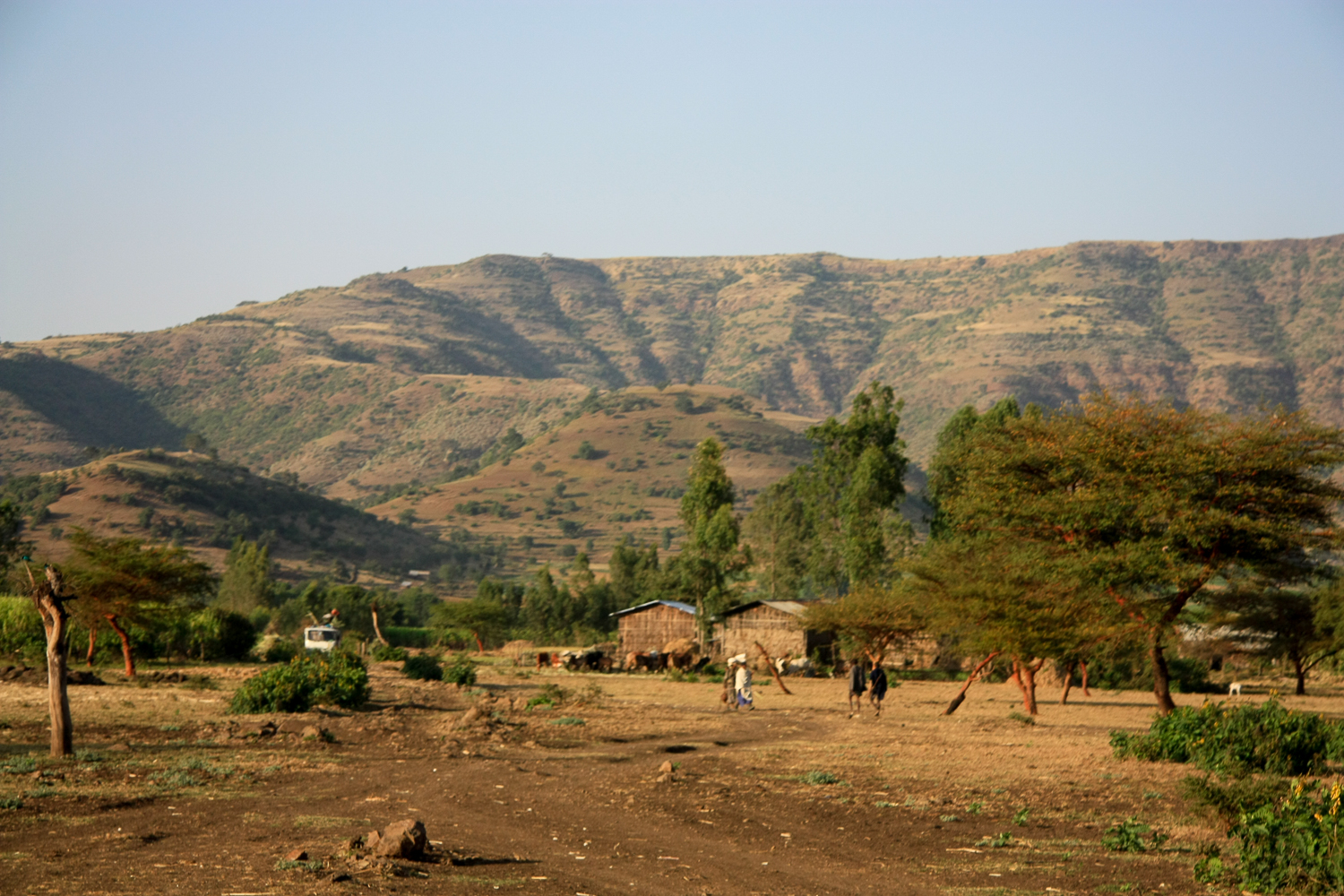 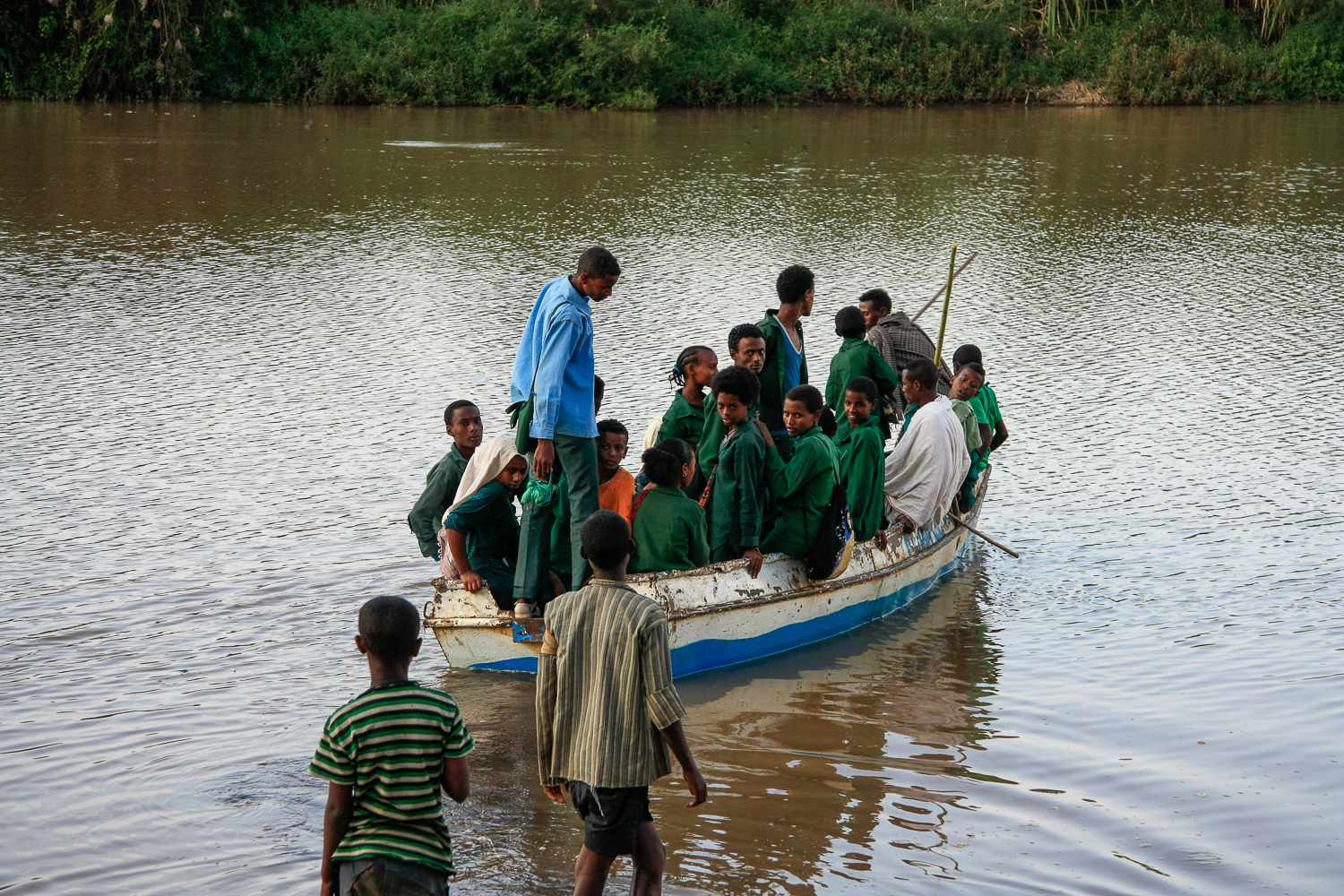 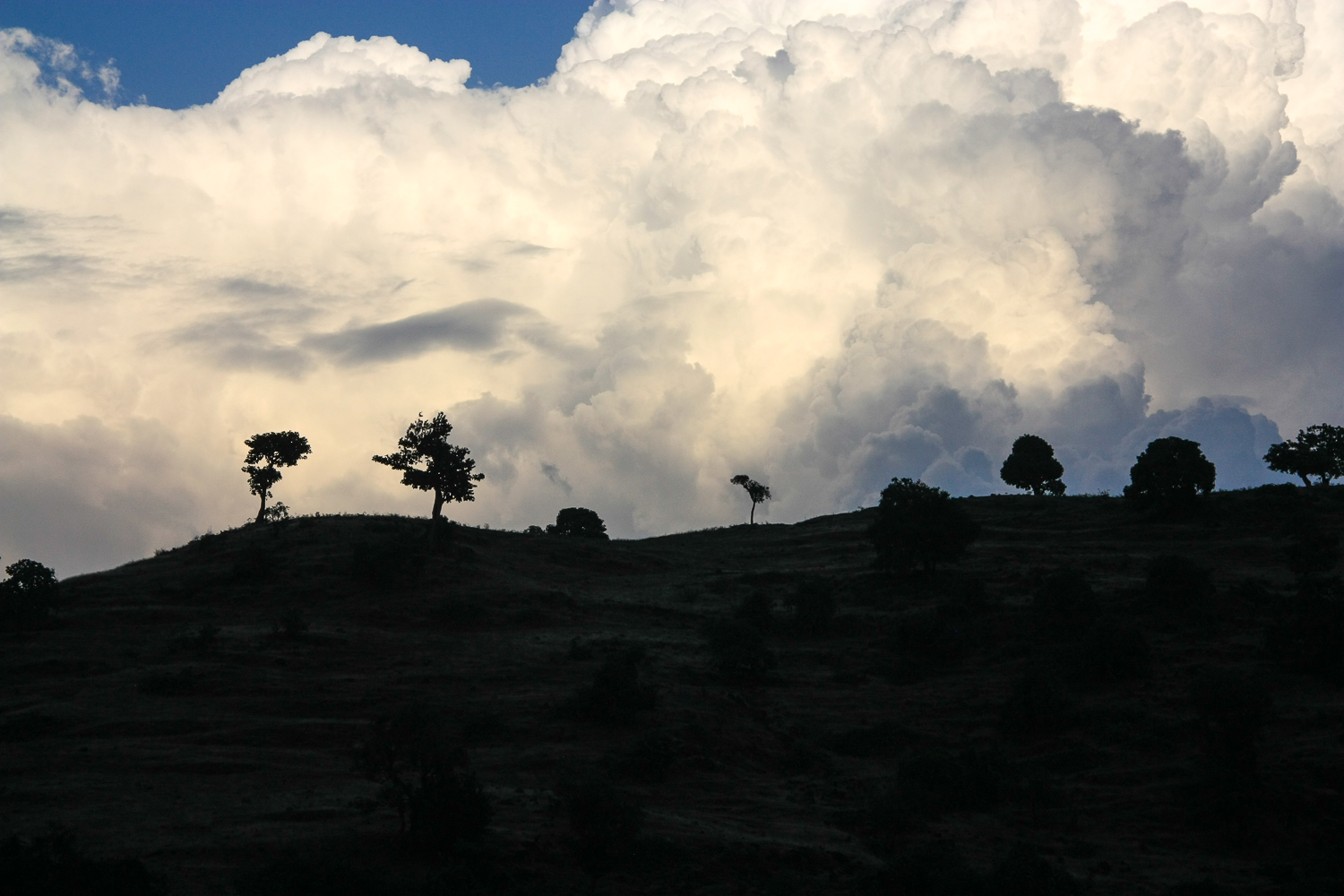 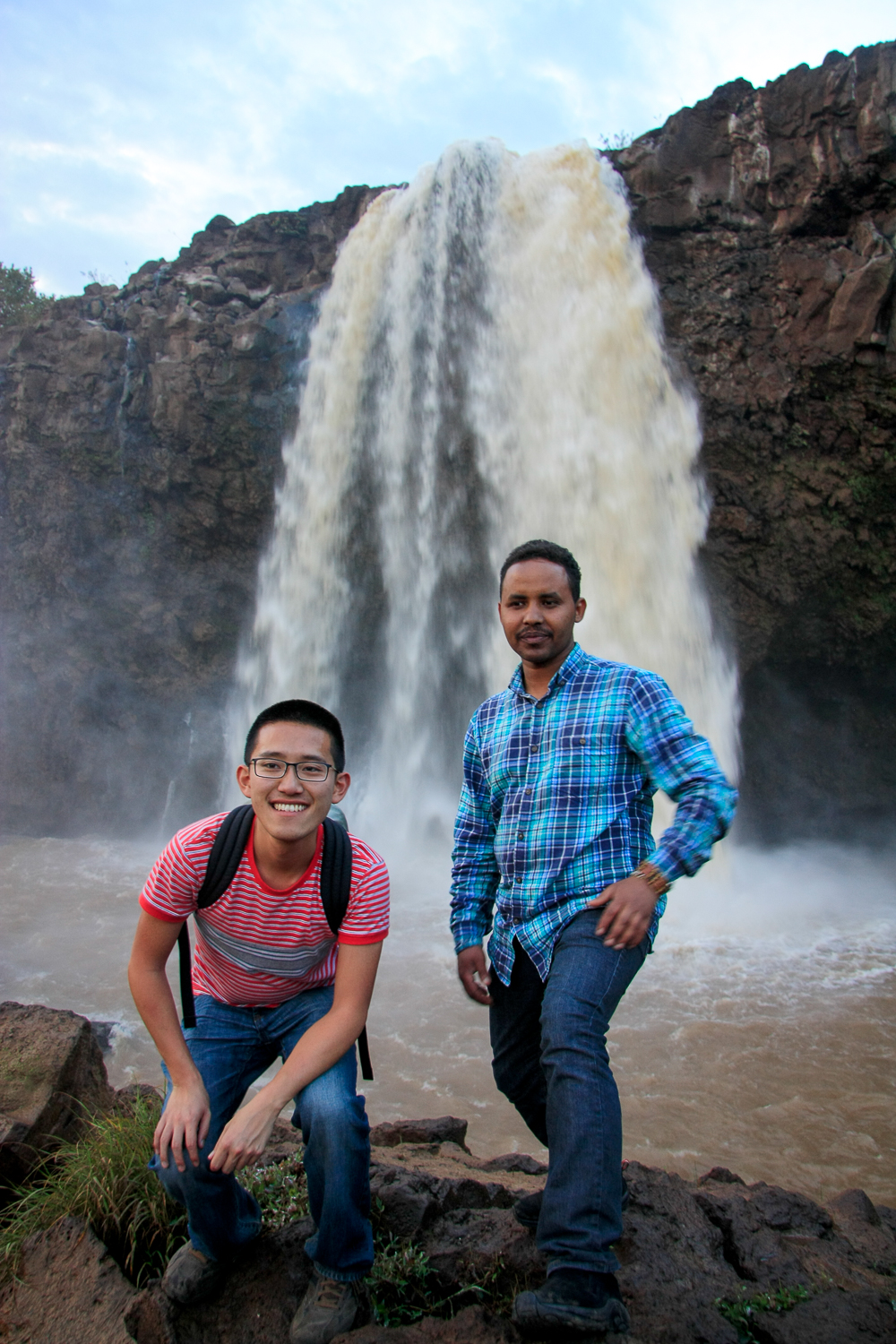 But by far the most enjoyable thing had to be the one night out we had at an azmari. Packed in a bar with locals enjoying beer and tej (honey wine, totally delicious), a musician with a mazingo randomly approaches an individual and starts improvising some lines (often teasing) in Amharic about him or her before moving onto the next person. As one of the few foreigners present, I had no idea what was being said, but the visible embarassment from the “victims” and the fits of raucous laughter from the rest of the bar were contagious enough to get my spirits ups.

And then he came to me. Obvious target. And you can probably guess how that goes. Or you know, you can listen to it and I’m certain you’ll understand at least one word — well, I did. 🙂

I’m told that everything that was said was quite complimentary — at least I hope Befekadu wasn’t pulling my leg there!

Dance performances followed, and I’ve never seen anyone able to shimmy their shoulders as rapidly and accurately as Ethiopians do. (Of course, they tried to get me to join in. After a glass of tej, I did… and lasted maybe thirty seconds before I was out of breath, as they continued on for like thirty minutes.) One dancer did a solo — shimmying (well, more like convulsing) every part of her body except her hands, which were spinning yarn from wool. What.

And then there was a satirical musical political skit, on the issue of federally-imposed regional patriotism. I’m impressed that even exists (both the musical satire and the imposed patriotism). I’m sad that I didn’t understand it at all, but the physicality of it was both humorous and enough to convey a bit of the meaning to me. Well, the locals and Ethiopian visitors were impressed enough to slap birr notes onto the performers’ heads *during* the performance (seriously, that’s how they tip — adhesion by sweat)!

You’d think Ethiopians would be used to the culture of their own country. They’re just as intrigued and entertained by it as I am, if not more.