Joburg is a shock to the system.

Having felt a slow and gradual change heading south from Ethiopia to Zimbabwe, waking up in Joburg to see skyscrapers, perfect roads, and a Western standard of living is jarring. But at the same time, Zimbabweans on my bus were jittery, and so was I.

Joburg has a reputation for being quite unsafe, and arriving into town at 6 am, passing empty streets full of garbage (turns out there’s an ongoing garbage strike), homeless people everywhere, graffiti, buildings left to crumble, and a general sense of unease in the city centre… well, let’s just say that that was the first time in Africa I felt nervous. 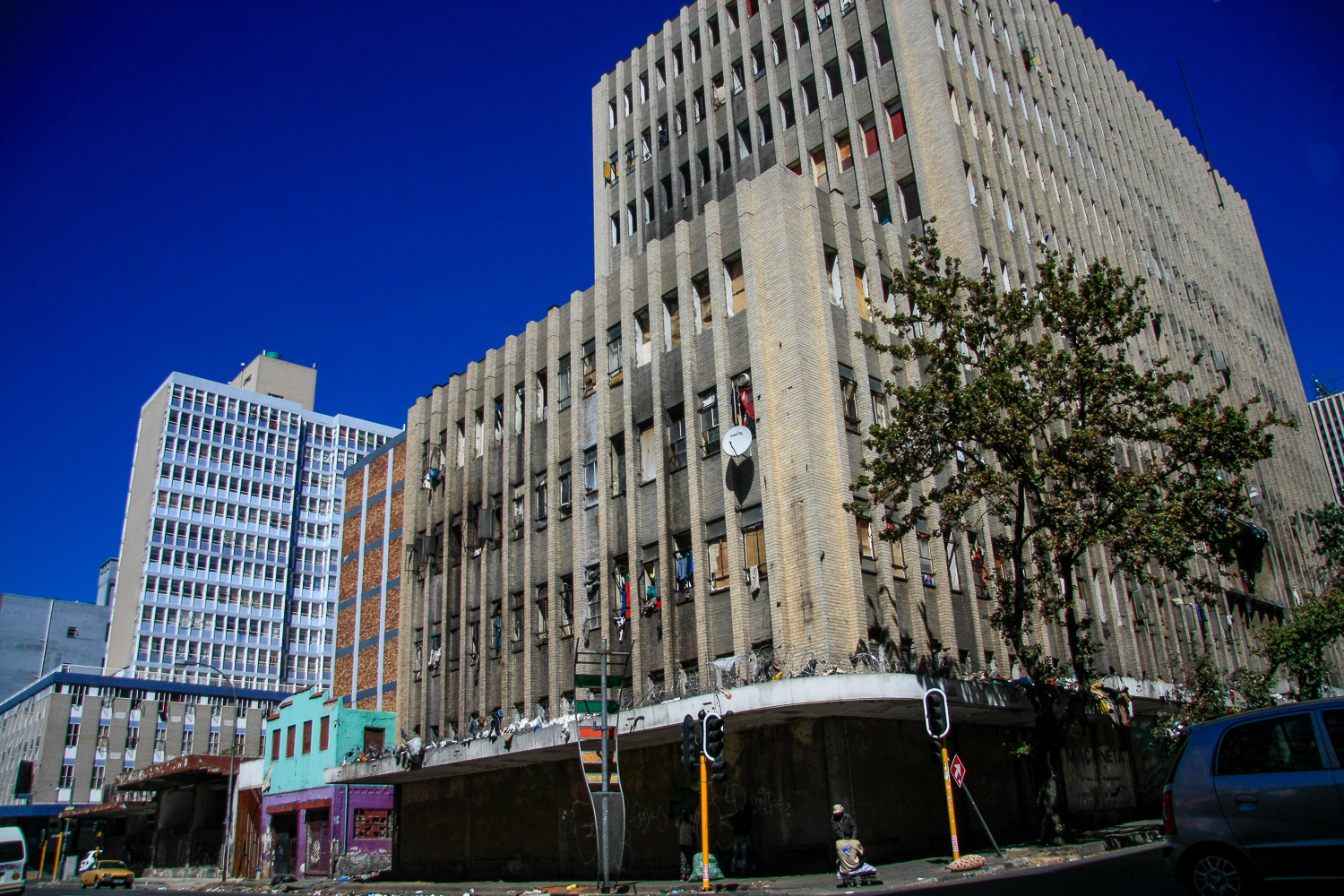 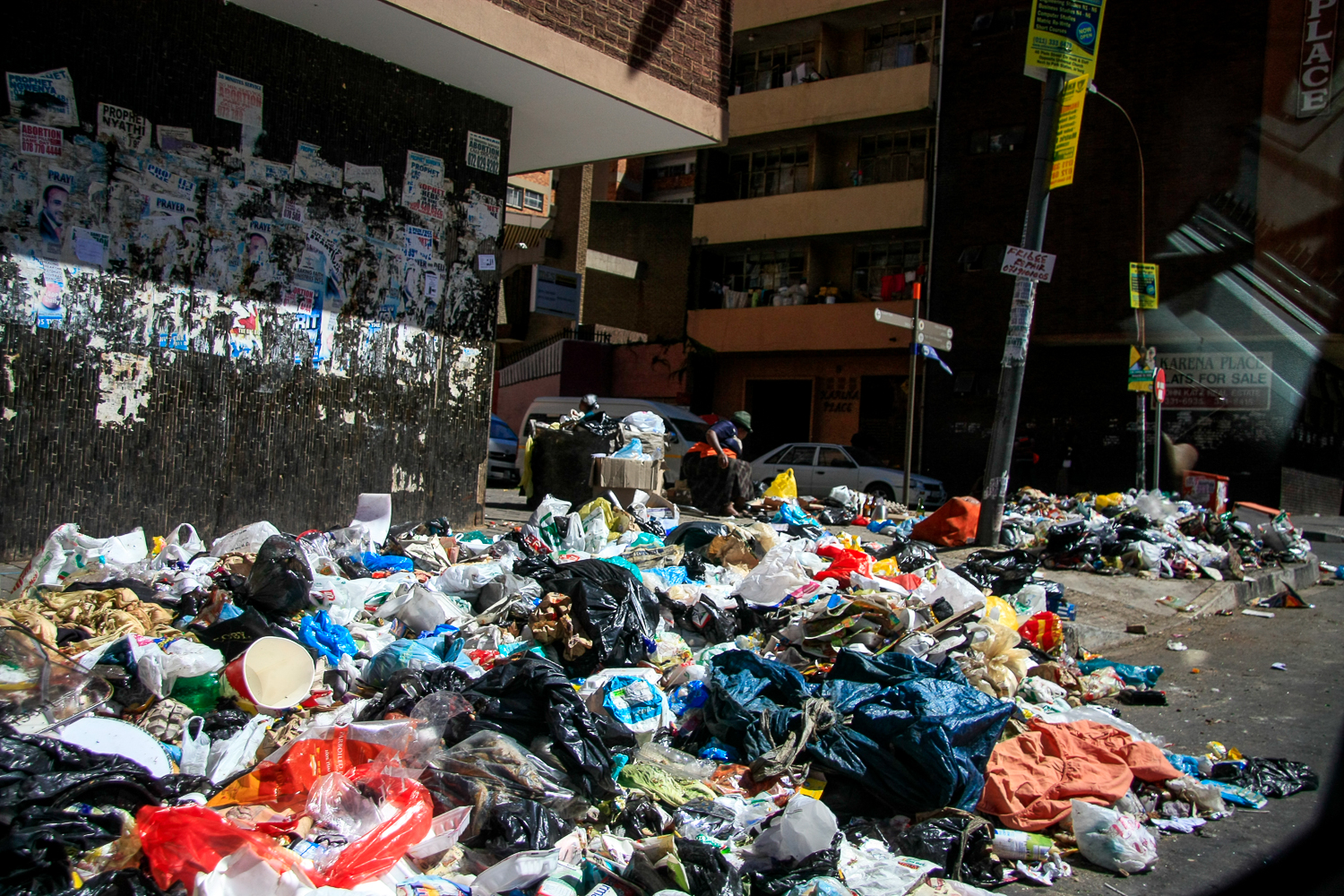 My hostel was in the Maboneng precinct, not far from the city centre, but it might as well be a different universe, except confined to a single street. I found myself in a street full of hipsters, hip restaurants, hip galleries, street art, and a trendy food/fashion/arts market. Old, dilapidated buildings refurbished into fancy lofts and galleries. Stylish people of all sorts walking down the street, people filming some TV show or movie, people strumming away on instruments — predominantly black, but pretty white too. Nearly like an America with the demographics reversed. It was great to gourmet food again and to see all the bursting creativity on the street. Lots of high end things. Am I still in Africa? 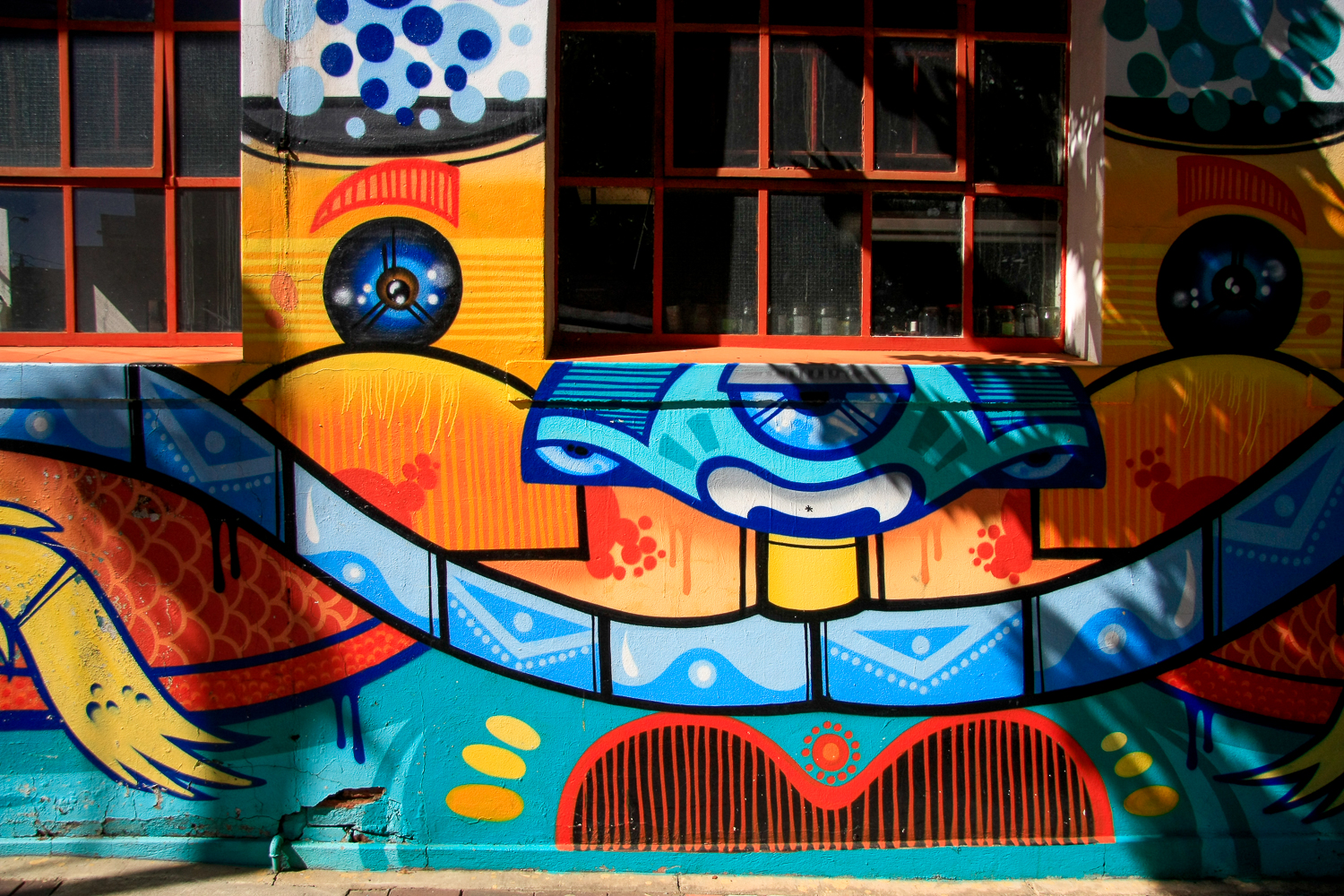 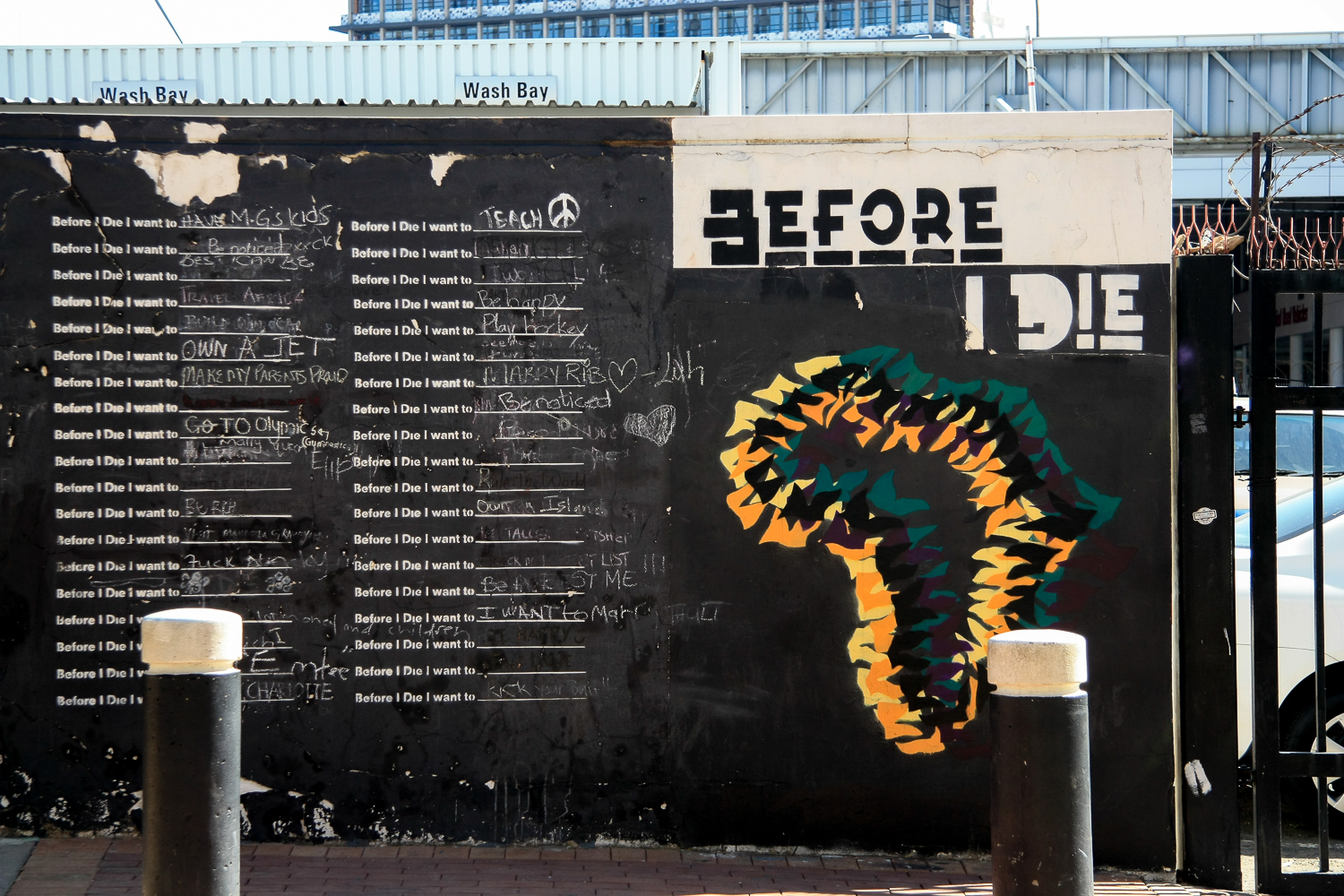 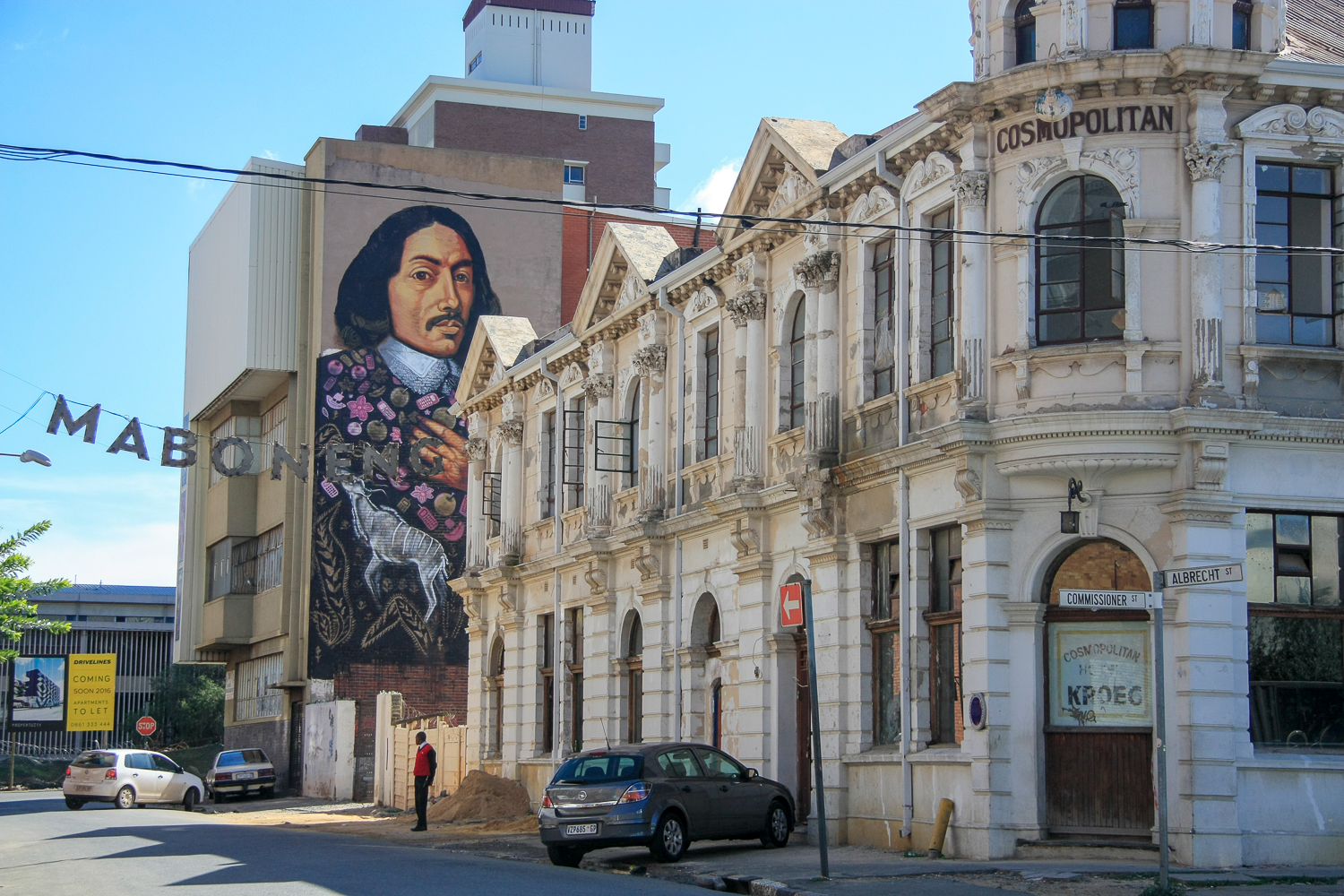 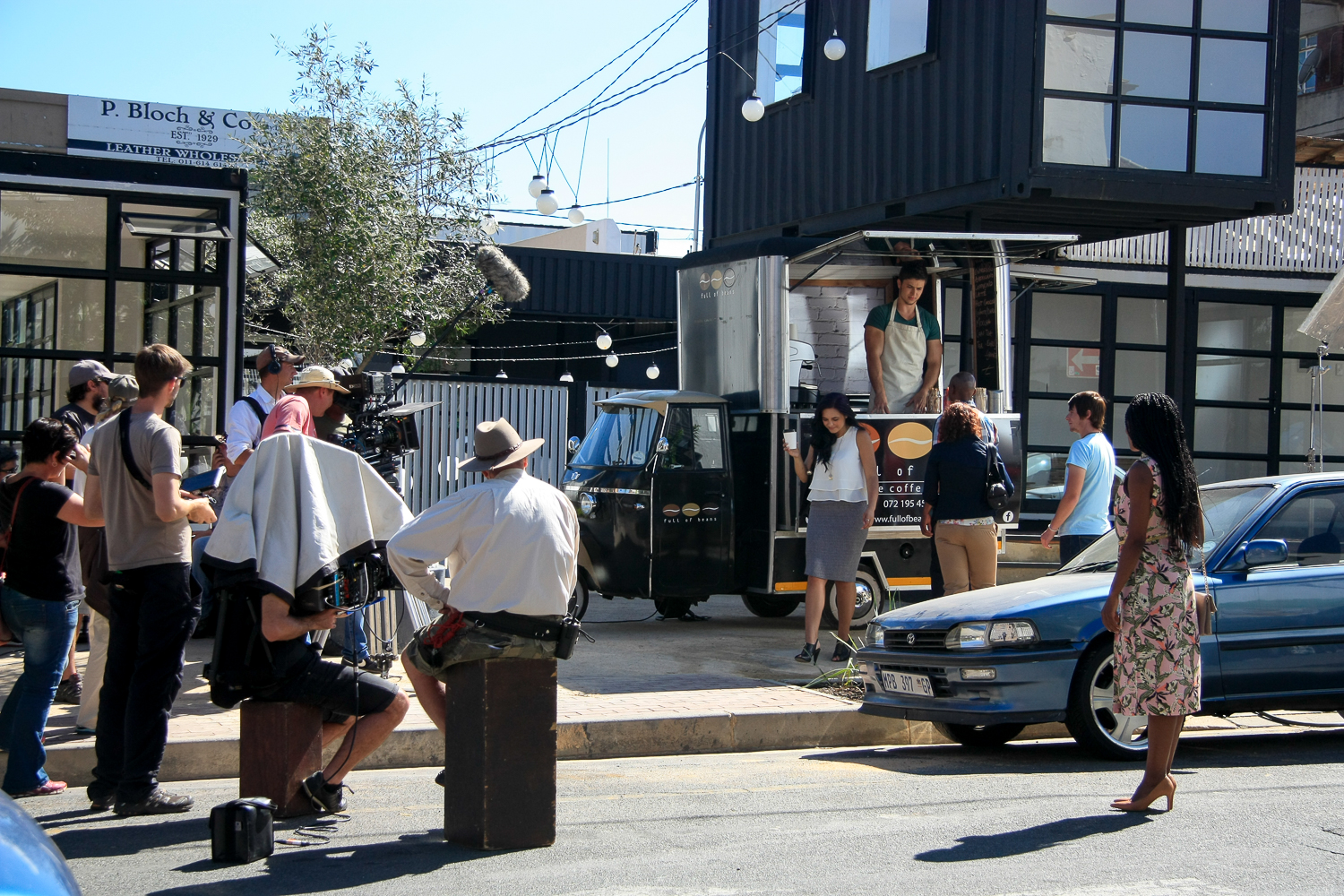 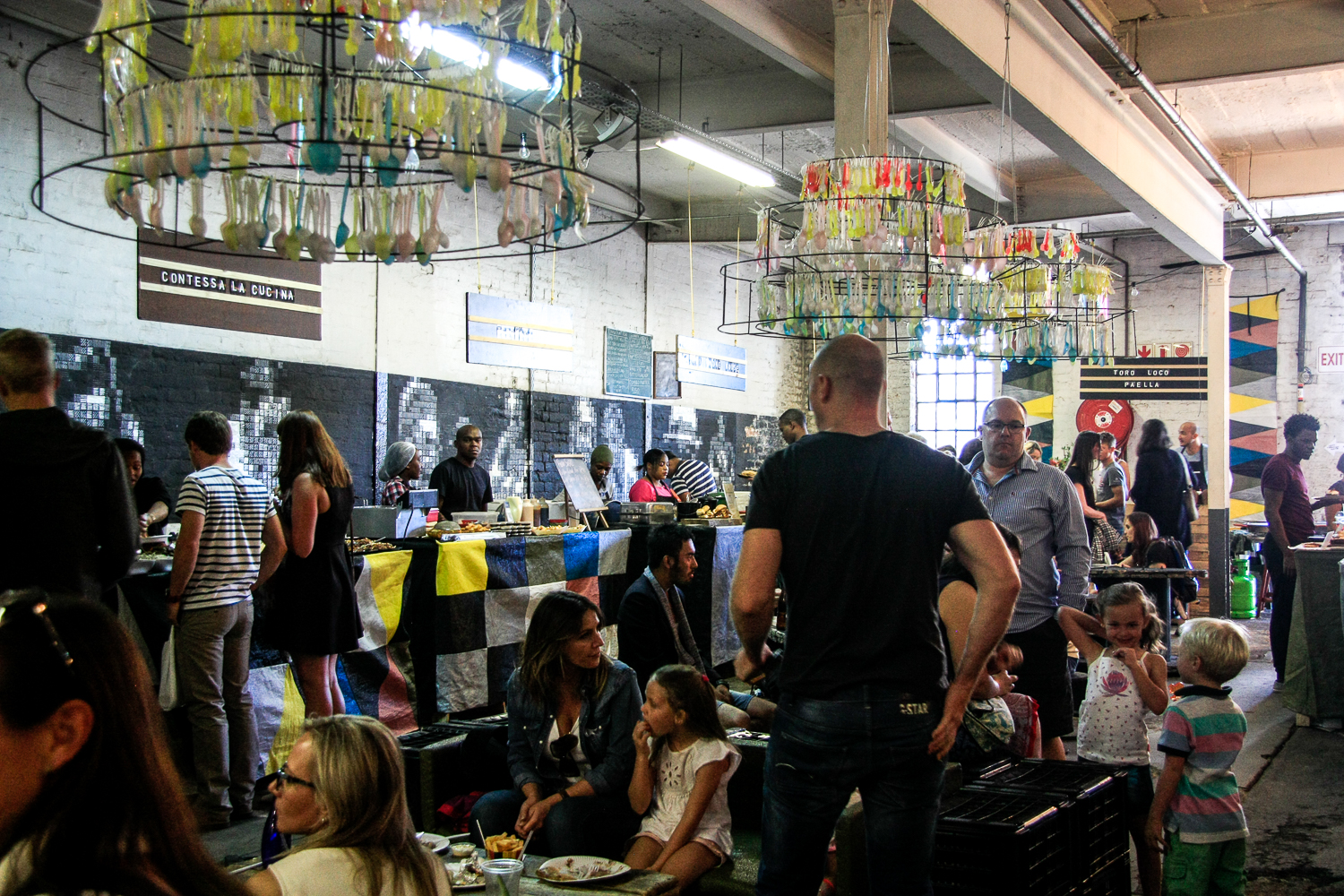 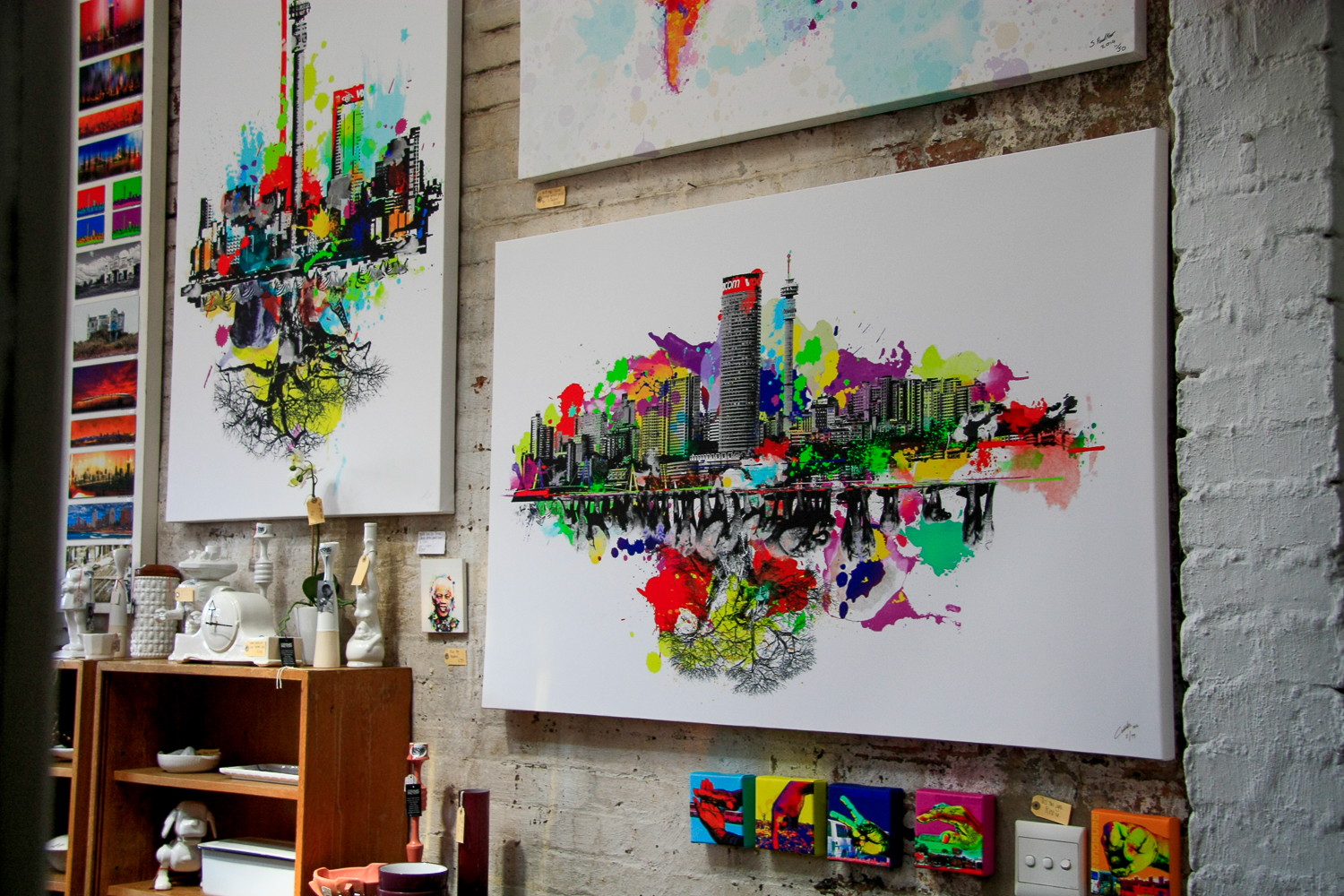 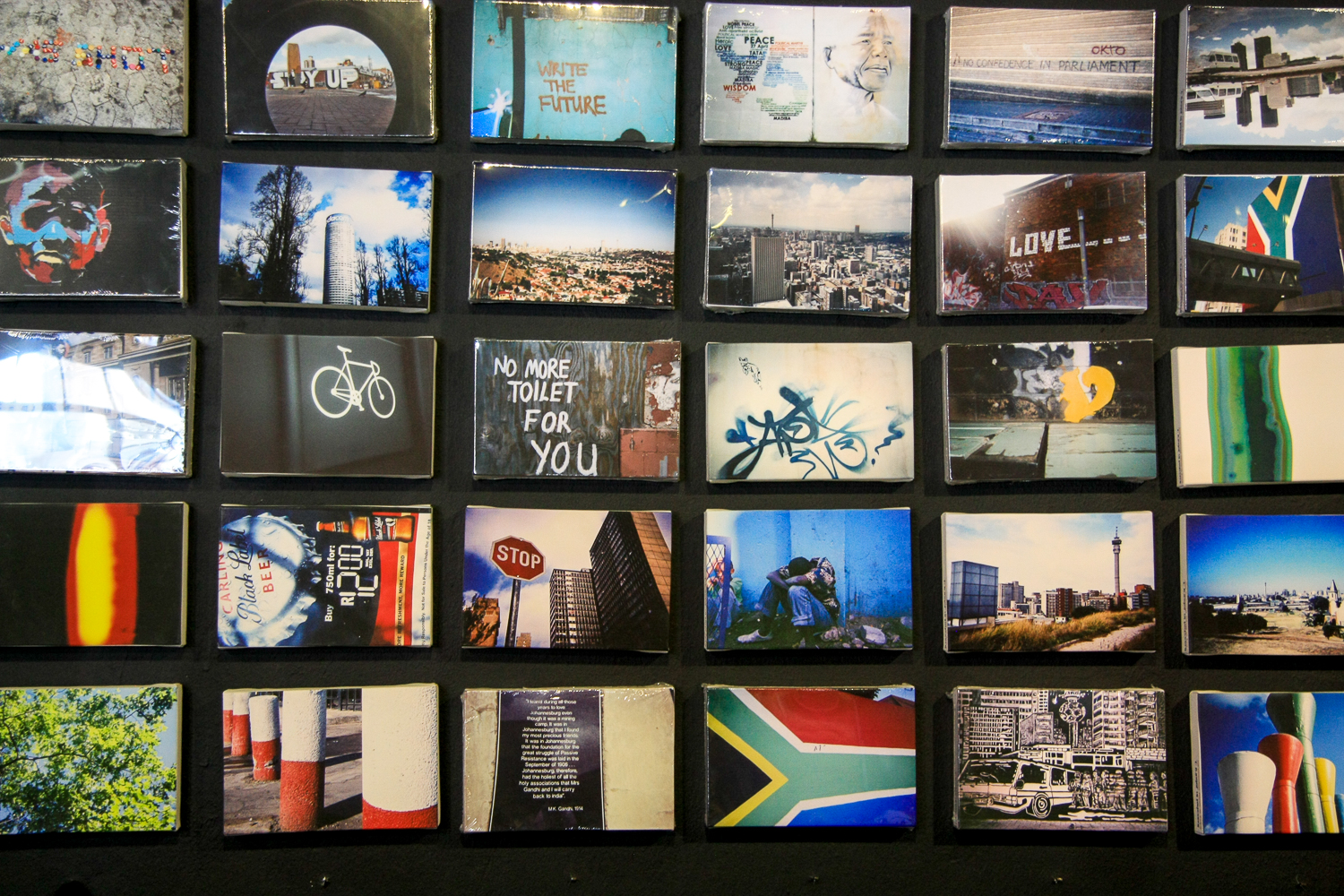 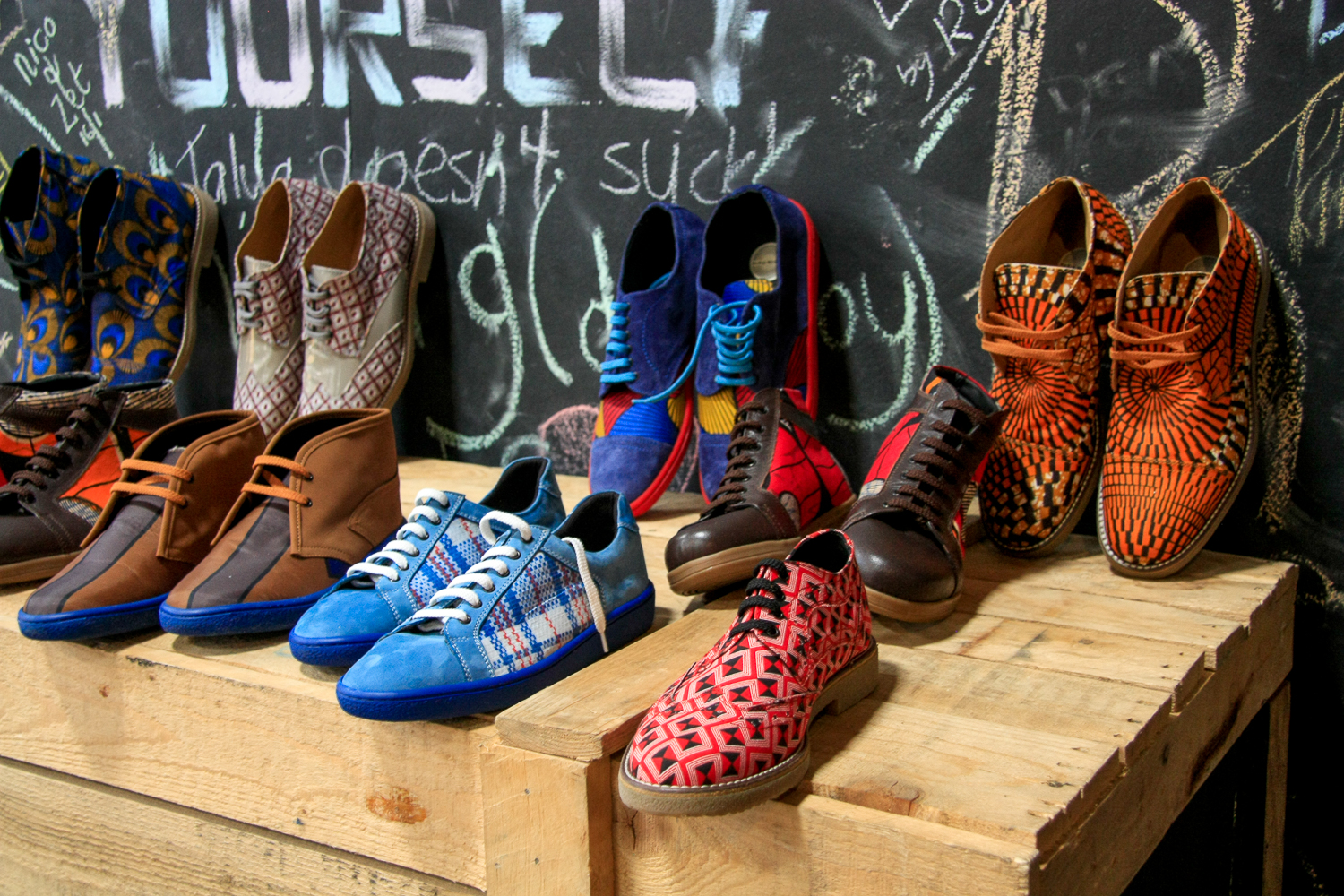 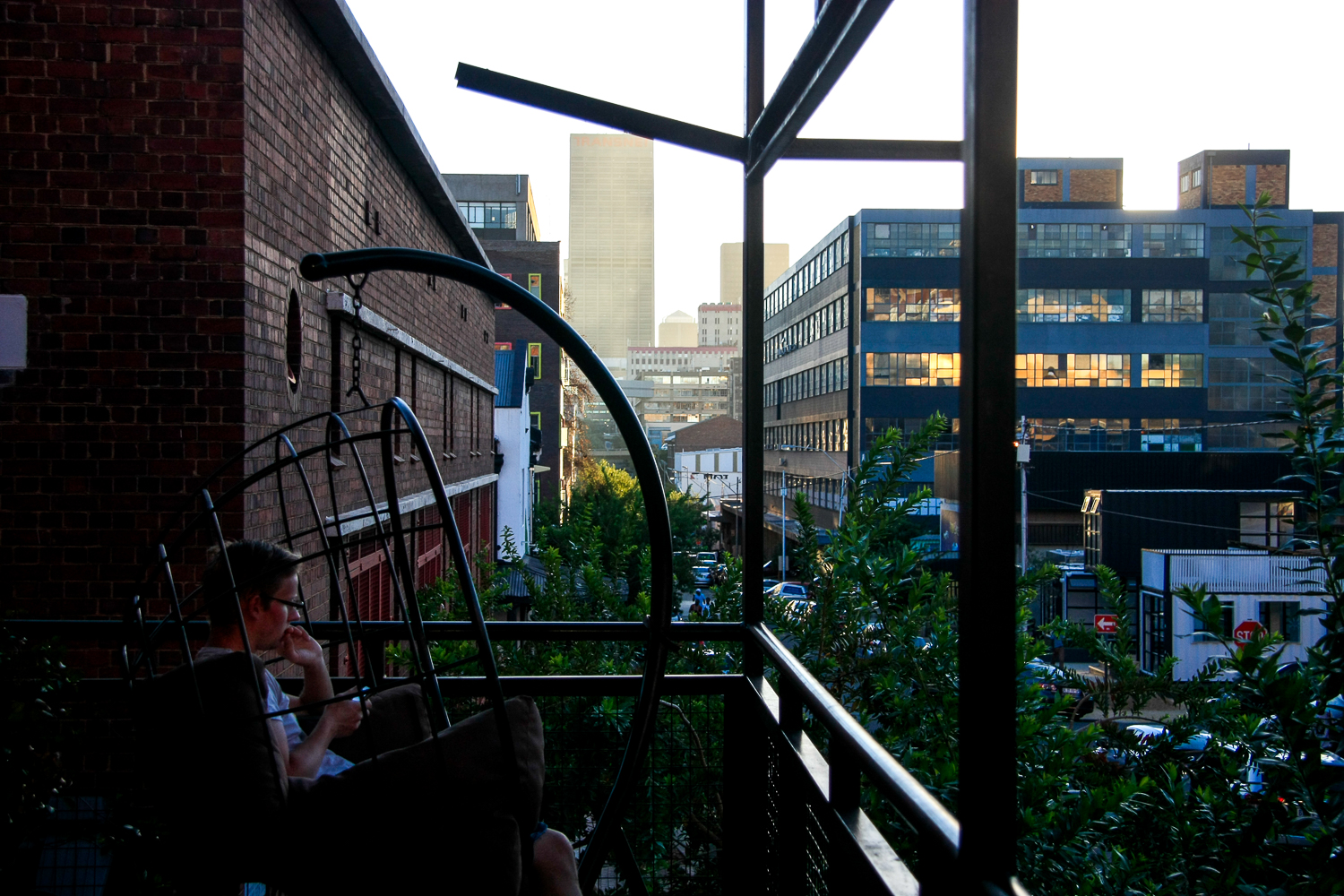 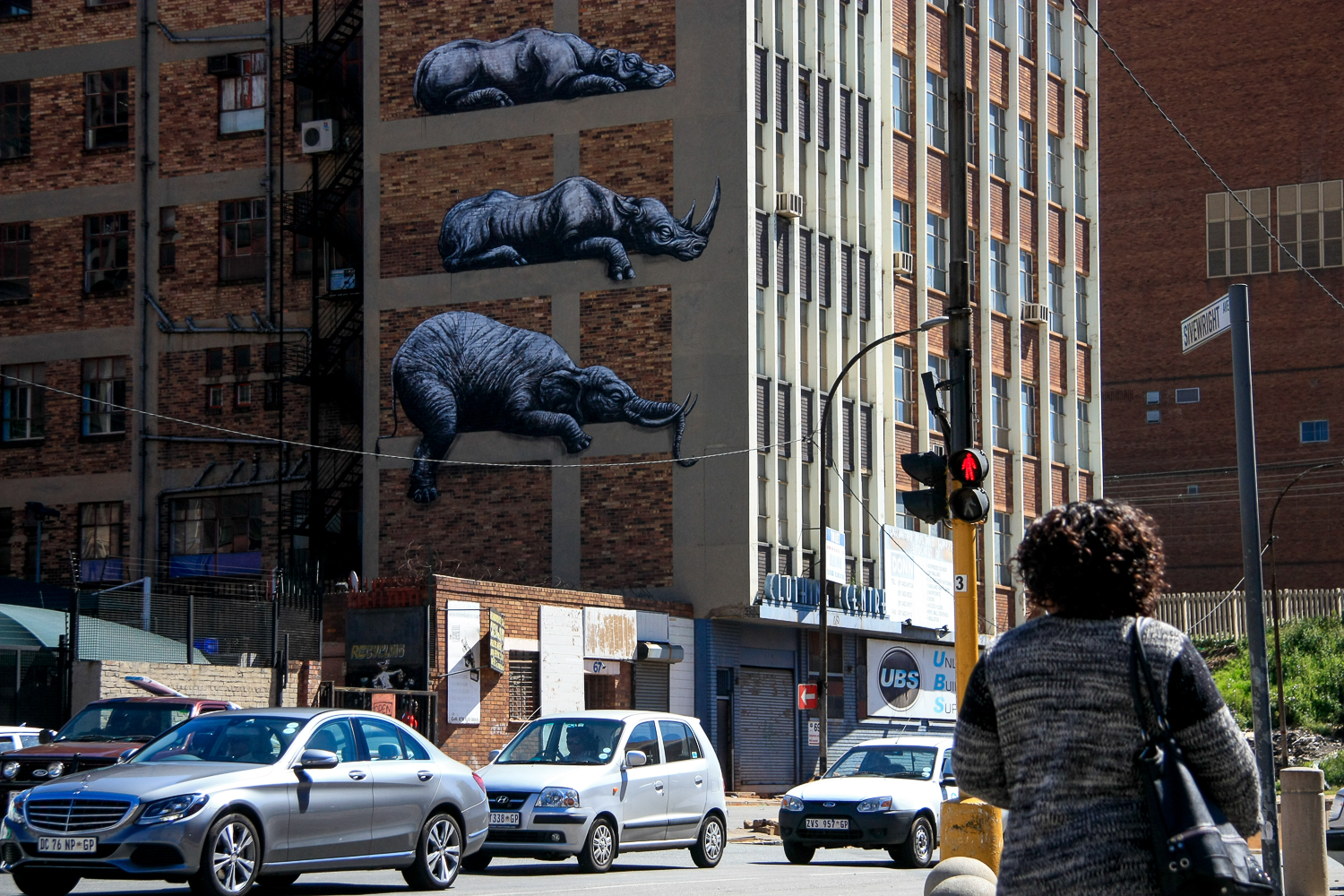 But that’s it. Sure, it’s a sign of potential, but it’s just one street (and a handful of surrounding buildings). Immediately outside of the precinct, having wandered astray a little, I immediately felt unsafe again. And it was unadvised to walk around — asking how to get from one place to the other led to suggestions to just take a taxi or Uber. I don’t like and I’m not used to taking private transport around unless I have to — not only is it expensive, but I lose out on feeling the day-to-day rhythms of a place while stuck in a bubble, and I struggle to understand the layout of a city. When I moved to a hostel in the suburb, the only option available to me was a combi (matatu/dala-dala/minibus taxi) to a giant Western mall. Even the hostel owner had never taken another combi route before and didn’t know any other places accessible by public transport! So… I felt trapped.

And yet, you really see the wealth gap — particularly divided on racial lines, despite Joburg being the most racially integrated city in the country. The rich suburbs are all predominantly white, and the poor districts predominantly black. Shop workers are practically all black. Shop owners, managers, and superiors in malls tend to be white or Indian. Is it wrong of me to say that, or am I looking for something to feel uneasy about and making it up? I’m really not sure.

While the rich are in their cars, the only people taking the combis are black. Others walk where they have to go, in a sprawling city with so many districts, where trying to buy something led people to direct me to malls 20 km away, still within the city. No car? No private taxi? No luck. 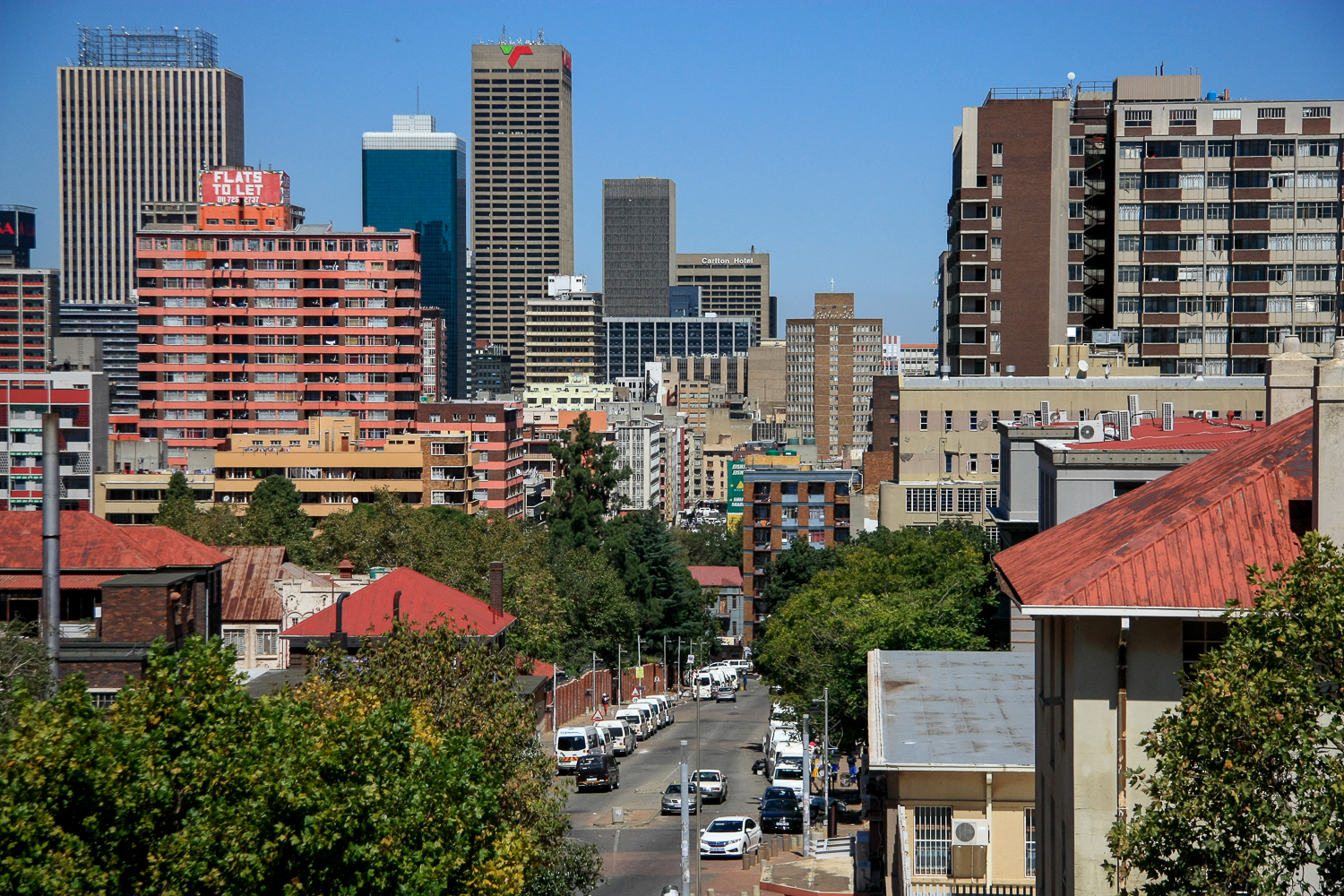 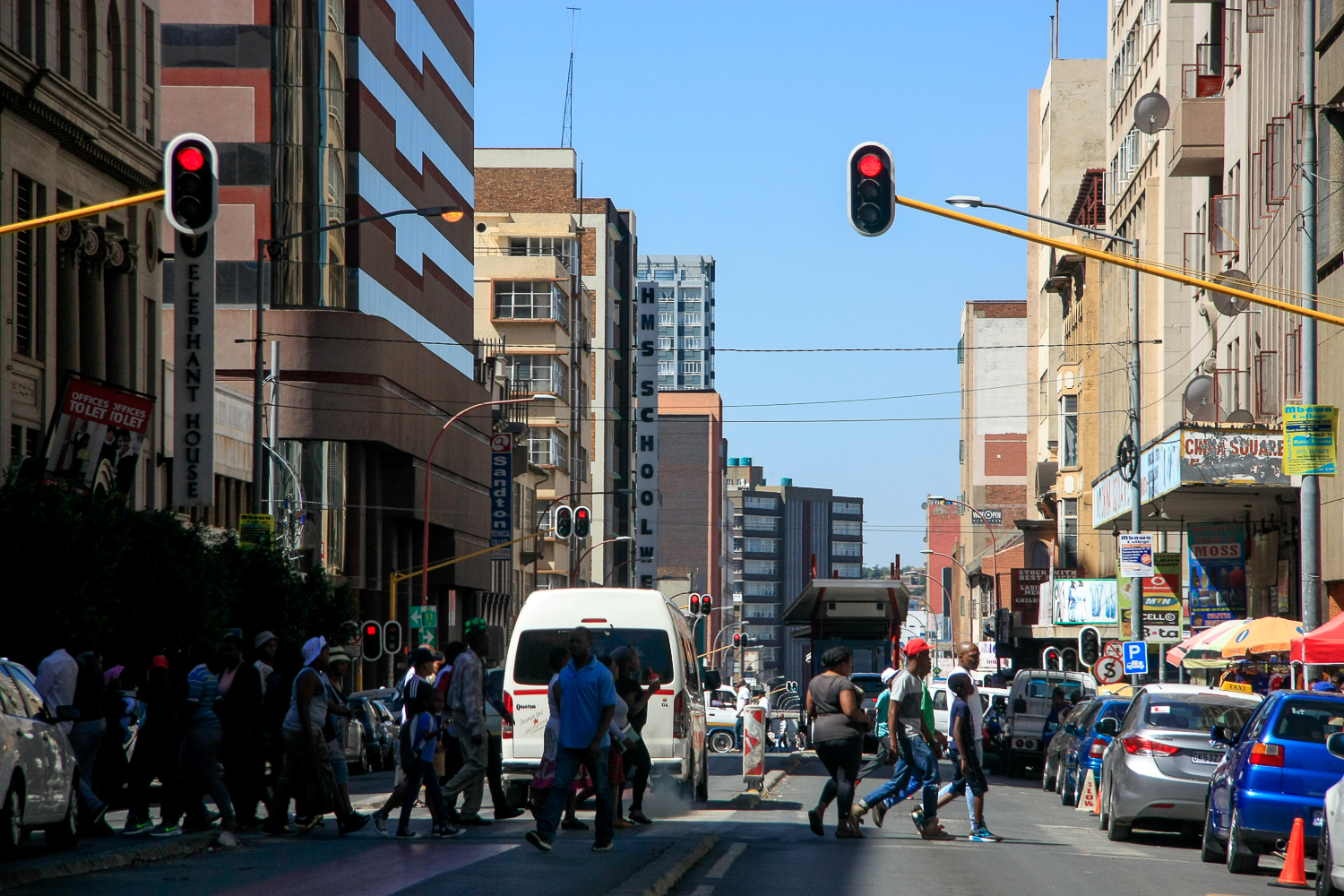 The type of travellers and accommodations in Johannesburg is quite different from the rest of Africa, with an abundance of backpackers and hostels. Fortunately for me, I met a motley gang of travellers — Youlian, Carolin, Umar, Simon, Lia, and Jonah — and we hopped into a rental car to visit some of Johannesburg’s important sites. (Jonah also tried to teach me, in Johannesburg traffic, how to drive a manual on the left side of the road — neither of which I’ve done before — so that I could rent a car for myself, but after stalling and shoulder-checking the wrong way multiple times with people honking behind me, I didn’t gain enough confidence to continue!)

Arguably the reason I came to Johannesburg, the Apartheid Museum (15 km away, so thank goodness for the rental car) was an overwhelming glimpse into South Africa’s recent history and the absolutely atrocious measures the governing white minority went to to preserve their wealth and suppress the minority blacks. And immediately upon arrival, you’re classified (randomly) as either “white” or “non-white”, directed to separate entrances lined with signs preserved from the apartheid era: “Train platform for whites.” “Men’s toilet for non-whites.” “Europeans only.” 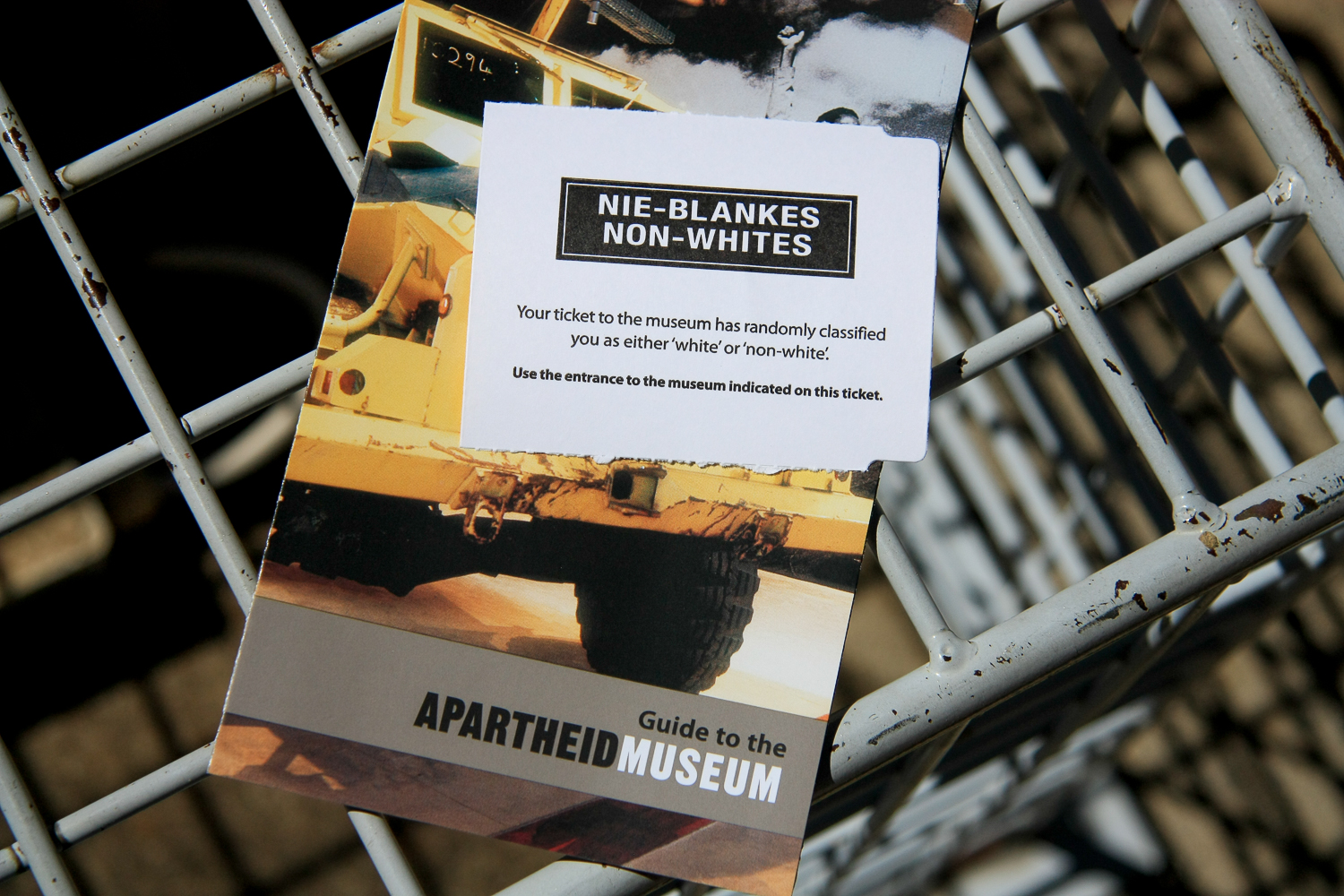 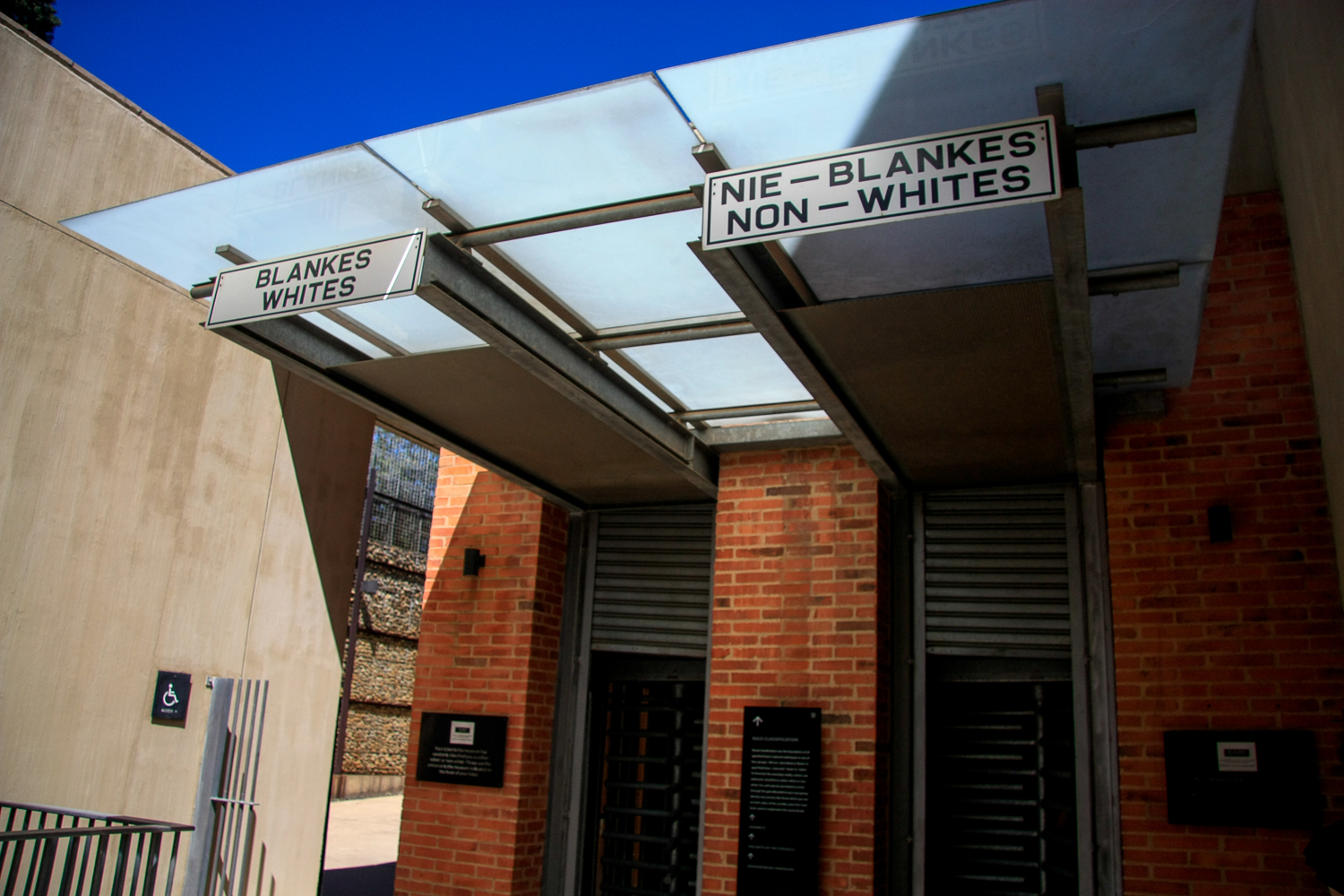 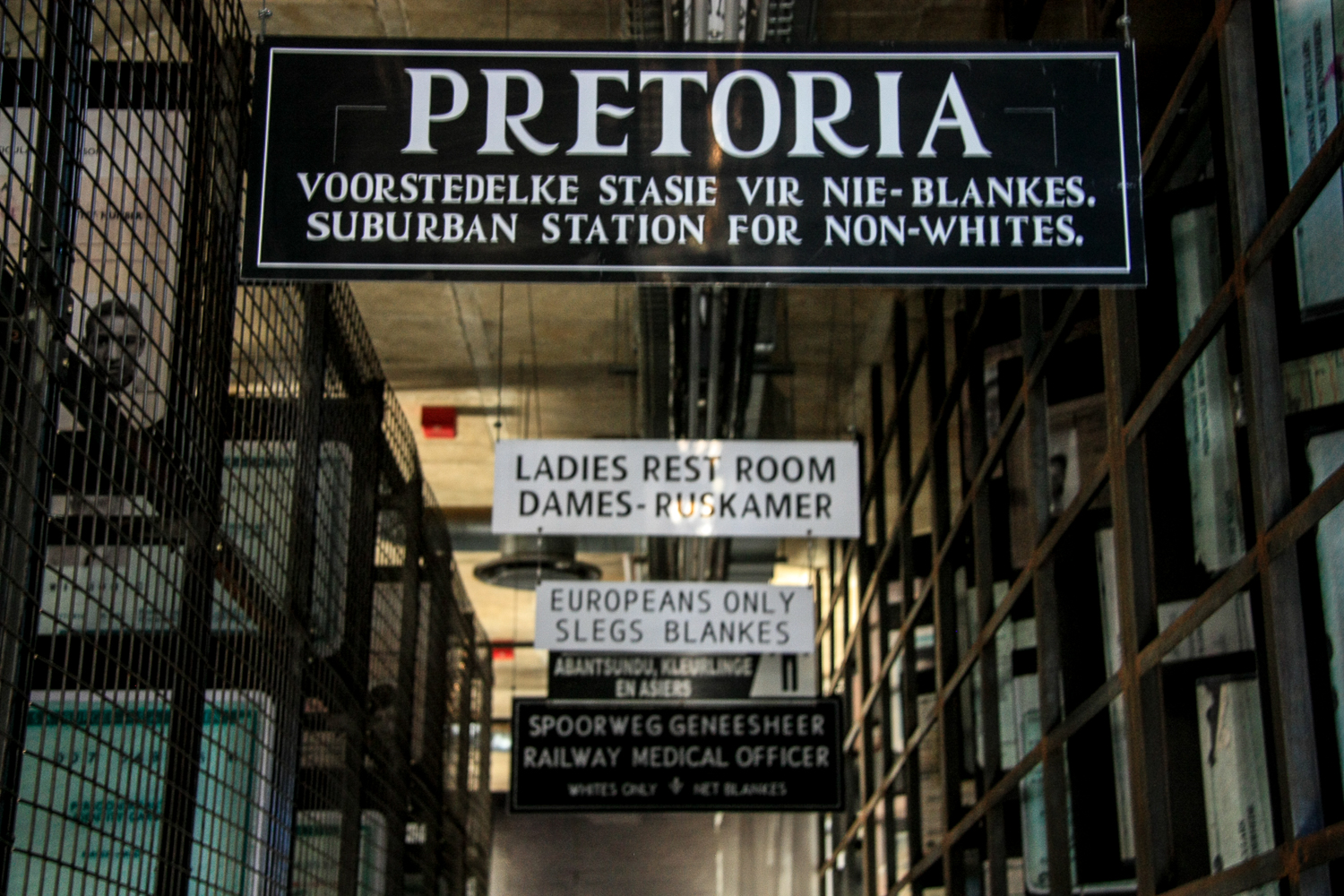 What is now South Africa was disparate pieces of land colonised by the British and the Boers (primarily Dutch, though some French, Germans, and Flemish), setting up ports for the spice trade. The discovery of diamonds and gold (Joburg is the capital of Gauteng, literally “gold province”) spurred them to attempt to control the movement of the native African population, primarily Zulu, Xhosa, and Sotho, and after several wars, the British found themselves in power over all, including the white Boer/Afrikaner population. All four of those groups were poor, and often hired to work in the mines, though the blacks were paid worse. The white population later decided on independence from the United Kingdom. Only white people were allowed to vote.

The black population was seen as inferior barbarians and treated as (and educated to be) unskilled, subservient labourers. Since low-skill jobs were in high supply during World War II, many blacks moved to the cities and overcrowding and crime became a problem. White people felt threatened, so the government decided that each race should live separately on their own, and classified everyone into races: white, black, and coloured (Indian, some other East Asians, or mixed, but ambiguously defined to a point that some families had “coloured” members and “black” members). People were coerced, often forcefully, to live in separate areas, and black people in particular were moved to townships often just outside of the cities where they worked. They would take a vastly under-scheduled, overcrowded train everyday to work and back. Meanwhile, white people had a train that ran on time and with no crowds. When a coloured or black township expanded too close to a white city, the government would demolish it and relocate people further away.

Passes were introduced denoting race, with random checks on the street for everyone but whites, and arrests made if passes weren’t carried or if a person of a certain race was in a whites-only area. (Coloureds were also heavily disenfranchised during apartheid, though not as much as blacks.) Intermarriage and even relationships between races was made illegal. Separate bathrooms, buses and bus stops, benches, ambulances, and entrances were benign and petty, but separate education systems (white students received 10 times the amounts than black students) and hospital services were particularly devastating. Segregating in sports led South Africa to be barred from the Olympics and other world leagues.

Coloured people were disadvantaged, though not as much. Most notably, Mahatma Gandhi lived through the racism and was thrown into jail several times, developing the non-violent protest movement he made famous and successfully advocating for more civil rights for Indians. Eventually, they were brought into the parliament, but blacks were not. Instead, black people were stripped of South African citizenship and relegated to “homelands”, meant to become “independent countries”, and those who were found outside of one were “deported” into one. Of course, these homelands contained the least fertile land and no infrastructure or economy whatsoever, and looking at a map, they were very uncontiguous as a result of that. Fortunately, no countries in the world other than South Africa recognised the independence of the homelands — it was a farce.

Protest movements formed — notably the African National Congress, counting Nelson Mandela as one of its leaders, and though peaceful, they were heavily and violently cracked down on, then eventually banned. They moved to underground acts of sabotage, like cutting electricity poles and bombing infrastructure — explicitly to prevent loss of life — and eventually tried to make the country “ungovernable” by refusing to pay rent or overthrowing local government. As opposition and chaos grew and grew, the government threw the country into a prolonged state of emergency, sending patrols into townships “for the people’s protection”. Of course, the main motive was just to kill anyone defying the law.

When the government forced schools to teach in Afrikaans, a language that most black people (teachers and students alike) did not speak and also associated with apartheid, resentment boiled over and students went on strike in the township of Soweto, near Johannesburg. The police responded by firing guns on children, killing and arresting many as young as 8 years old. The shocking images were a turning point in both international and South African opinion of apartheid, and the government found itself increasingly isolated and under international sanctions and trade blockades.

There’s so much more to this story and I can’t possibly summarise it all here. But in order to settle the chaos, the government finally relented, released Nelson Mandela from prison after 27 years, and began negotiations to end apartheid, create a new constitution, and start an inclusive democracy — a pretty massive transition that did meet a lot of opposition, both from the rich whites that didn’t want to give up their privilege, and from some radical black groups that felt they weren’t represented enough, or even that whites should be expelled from the country. Nelson Mandela, the strongest voice of the nation at that point, advocated for an inclusive South Africa for all races — an important cornerstone of the reconciliation of the country. South Africa elected him as president in 1994.

You can see that at Constitution Hill, built adjacent to the notorious No. 4 jail using bricks from the demolished awaiting-trial area. Their past was horrible, but like the new constitutional court, they’ll use the bricks of the past to build the future. It’s a lofty goal. In an area where black and coloured non-violent political prisoners were locked up with murderers, humiliated to feel like less than animals, isolated to the point of losing their sanity, deprived of food and hygiene (one shower a week, 30 minutes for 2000 people to run under eight showerheads; laundry once a year), and left to fester in disease, now stands a court with the 27 statutes of the constitution denoting equality for all, and including even their former oppressors.

There’s a firm foundation for the new country, now 22 years old. And sure, many promising things are happening. Soweto, the infamous township known for its poverty and danger and site of the uprisings, now has parts that look more like an affluent suburb, with vibrant arts, fancy restaurants and big houses. 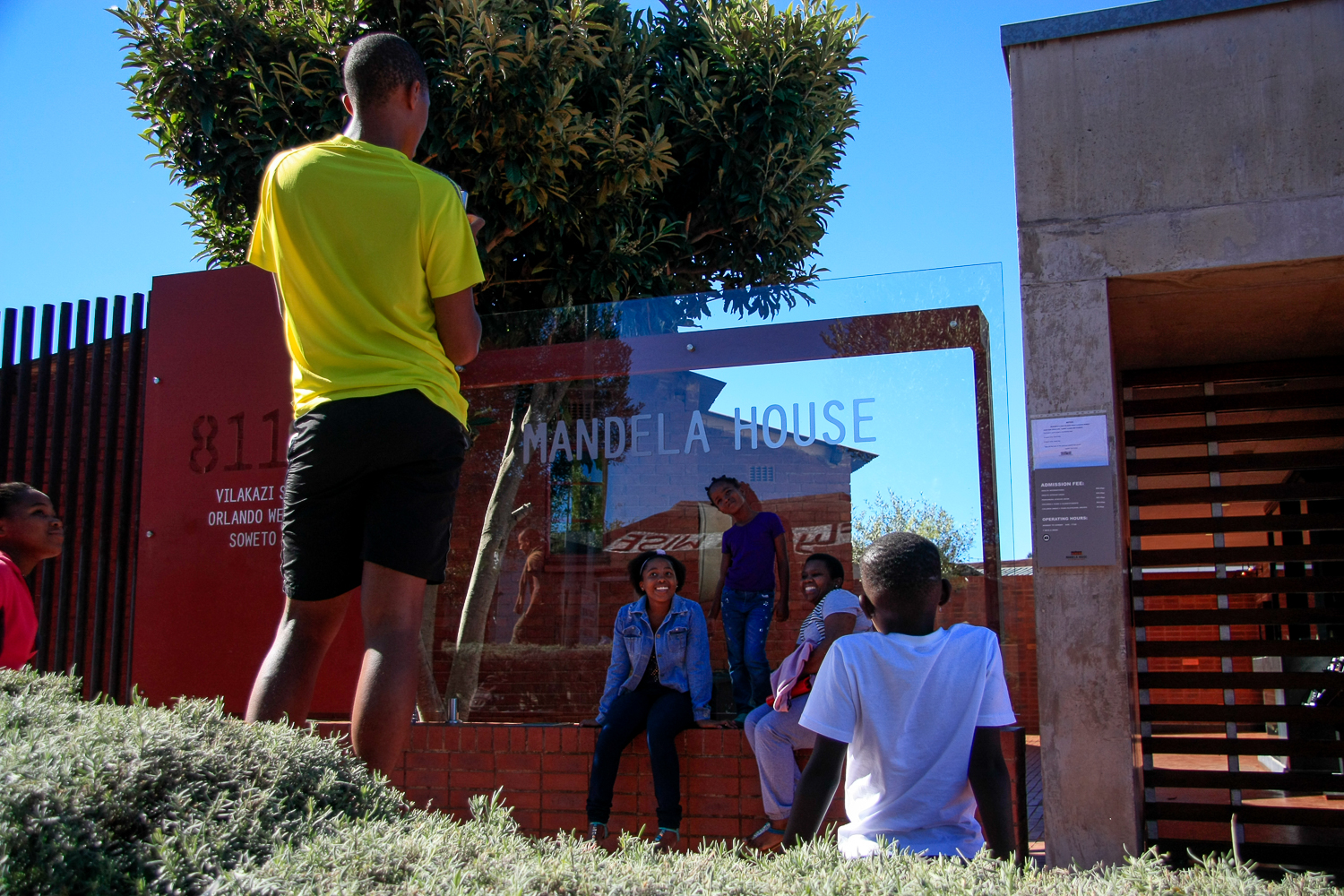 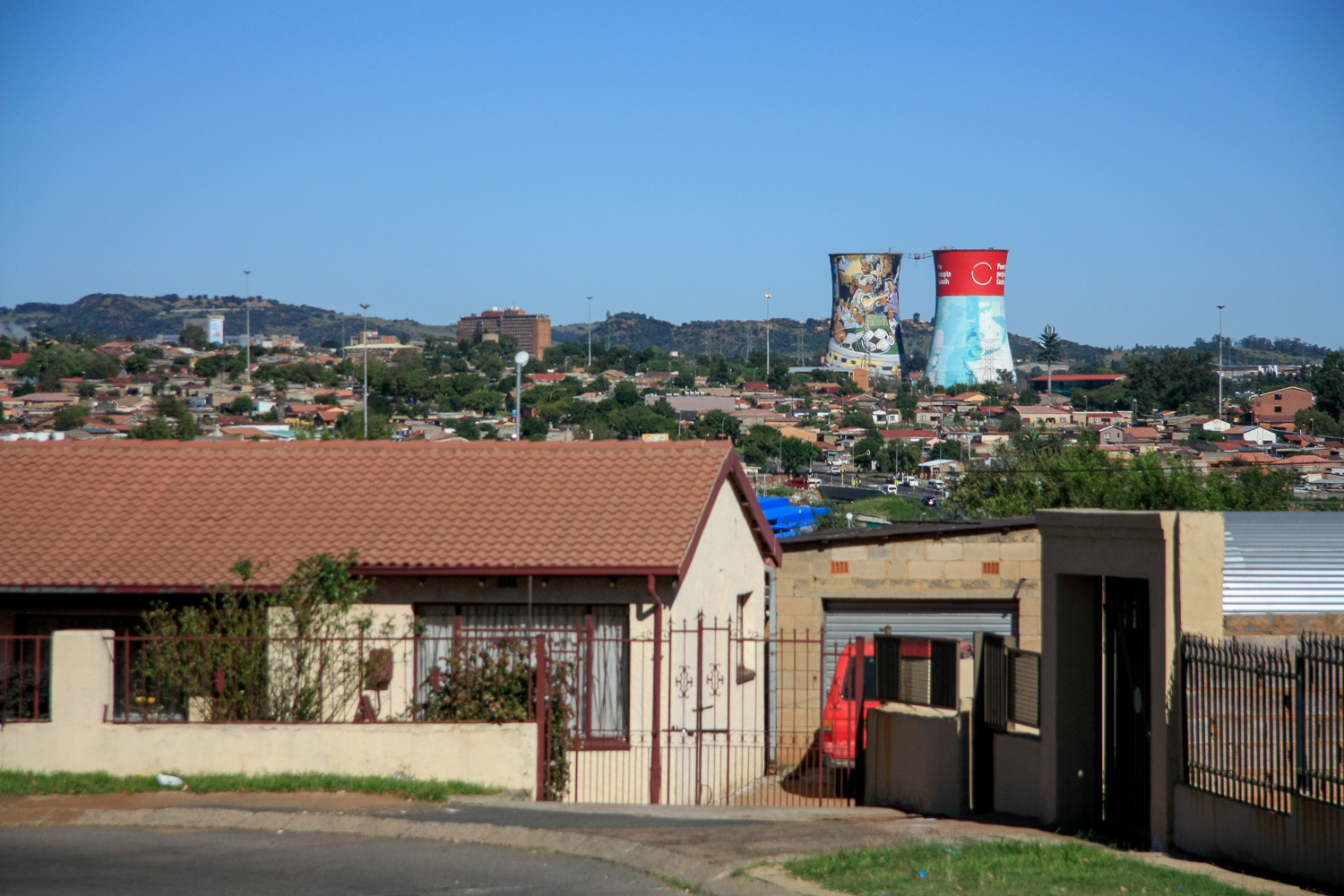 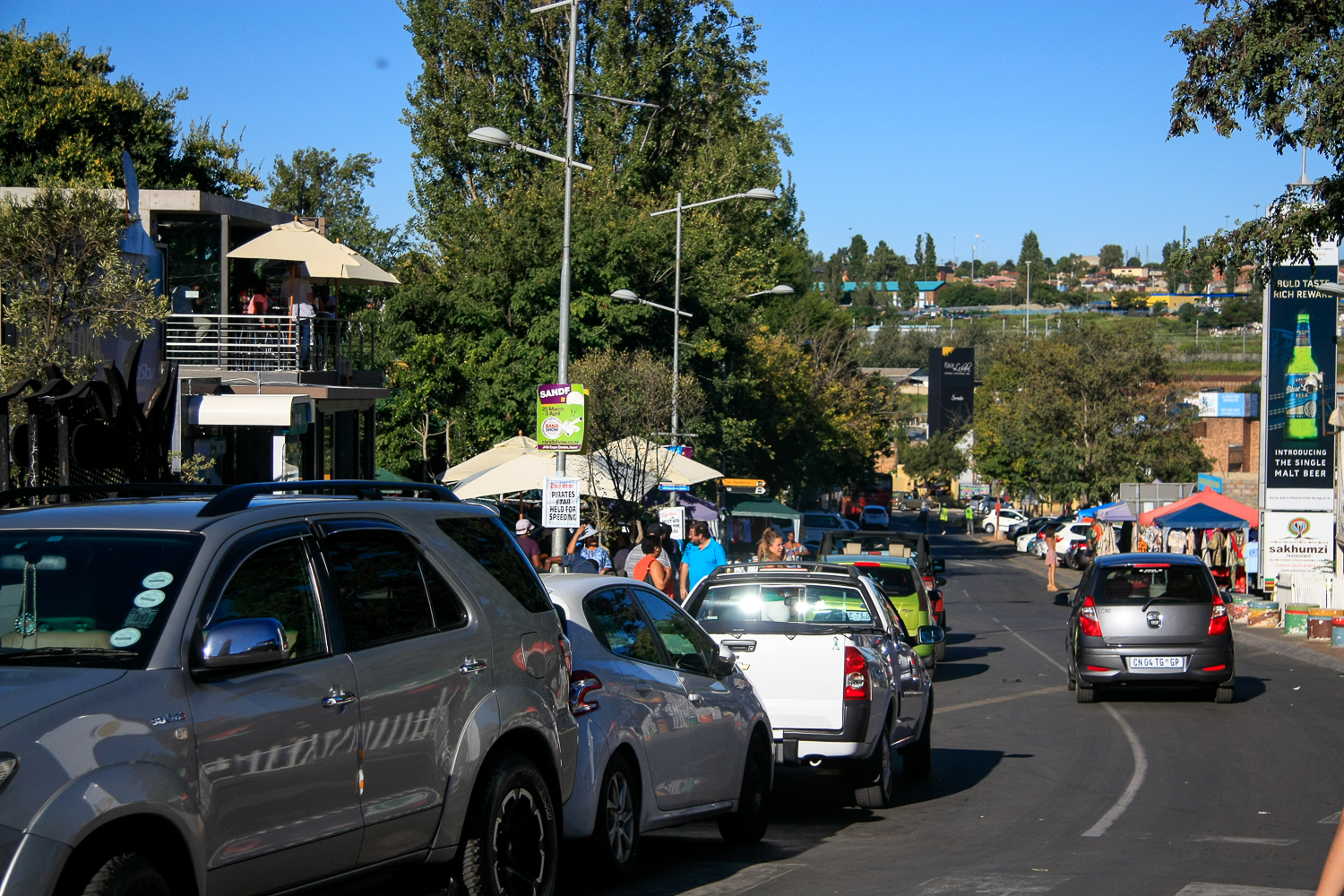 And in Johannesburg, locals of all racial stripes, speaking their own own language and also English in a range of accents all unique to the country, are all quite friendly and proud of their country and its beauty. Back in Maboneng, the weekly stand-up comedy show is a total riot and doesn’t pull any punches in terms of race jokes.