It’s not so easy to get around South Africa without a car. The distances are long and — for once! — underpopulated, with lots of empty space. There are minibus taxis that run to various towns, but they’re infrequent. Long-distance buses run maybe once a day. And even if you get to a town, the interesting places to stay all tend to be well outside of it, requiring odd transfers. Take the Drakensberg, for instance. The places to stay don’t even have proper addresses, since they’re some 15-20 km out of town! There’s a backpacker-oriented bus that runs throughout the country, but it doesn’t run every day, it’s expensive and you may have to pay even more for a connecting shuttle, and without a car, you’re basically trapped at the accommodation they take you to.

That’s not to say that it can’t be enjoyable, though. The Drakensberg range, spanning a whole bunch of national parks, has scenery that rivals the Simien Mountains in Ethiopia in its grandeur. Reaching the northern end after a spectacular bus ride through large-scale farmland, I was stunned by the Amphitheatre, an 8 km cliff wall rising suddenly and dramatically from the rolling hills. The eponymous backpackers’ lodge I stayed at there was a lovely retreat, complete with 10 km of its own walking trails on their estate. Seeing the morning, afternoon, and evening light on the rugged Amphitheatre walls, then the Milky Way at night, was a great way to pass the time, and I spent nearly two days idle there just enjoying the atmosphere without doing any real activities. 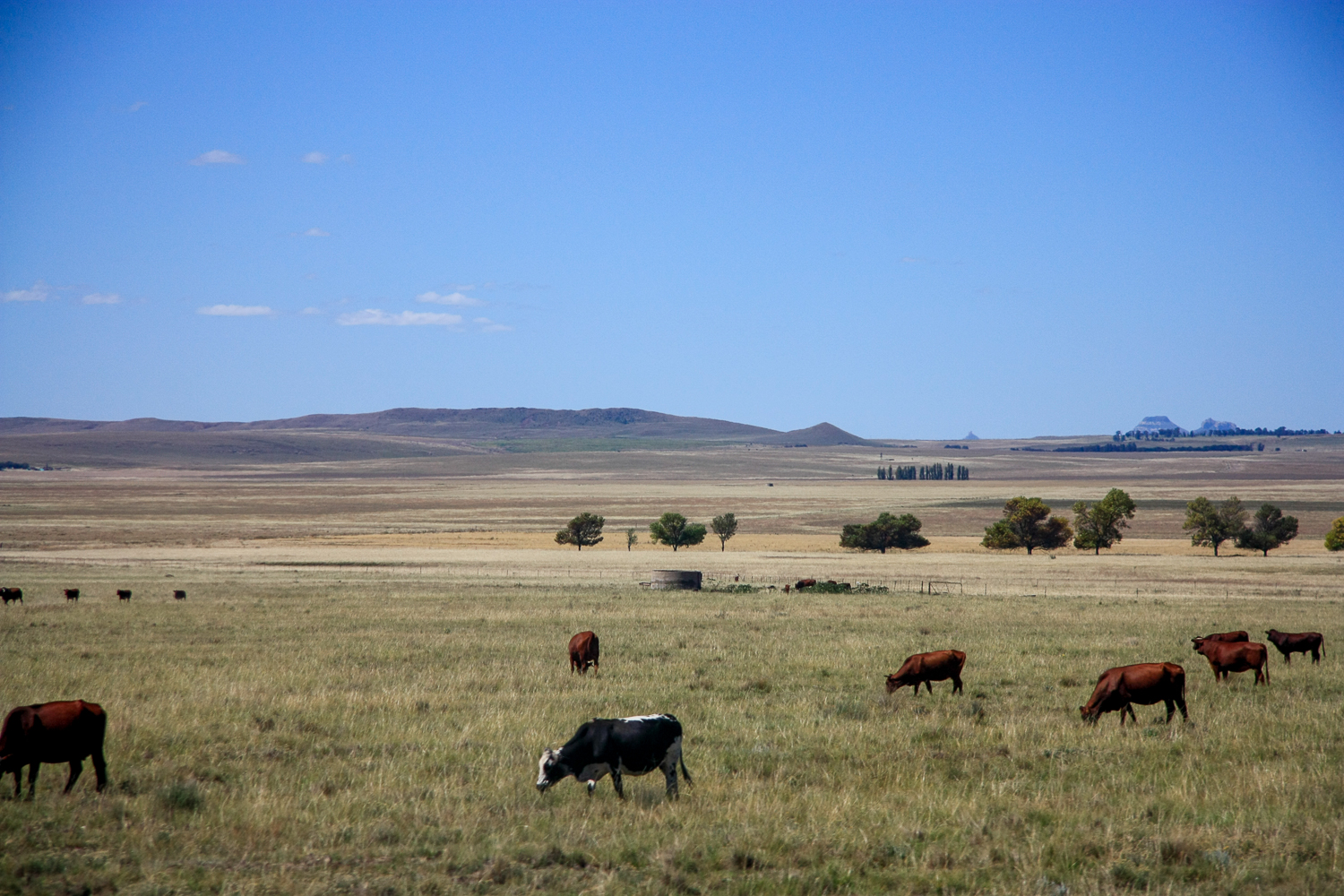 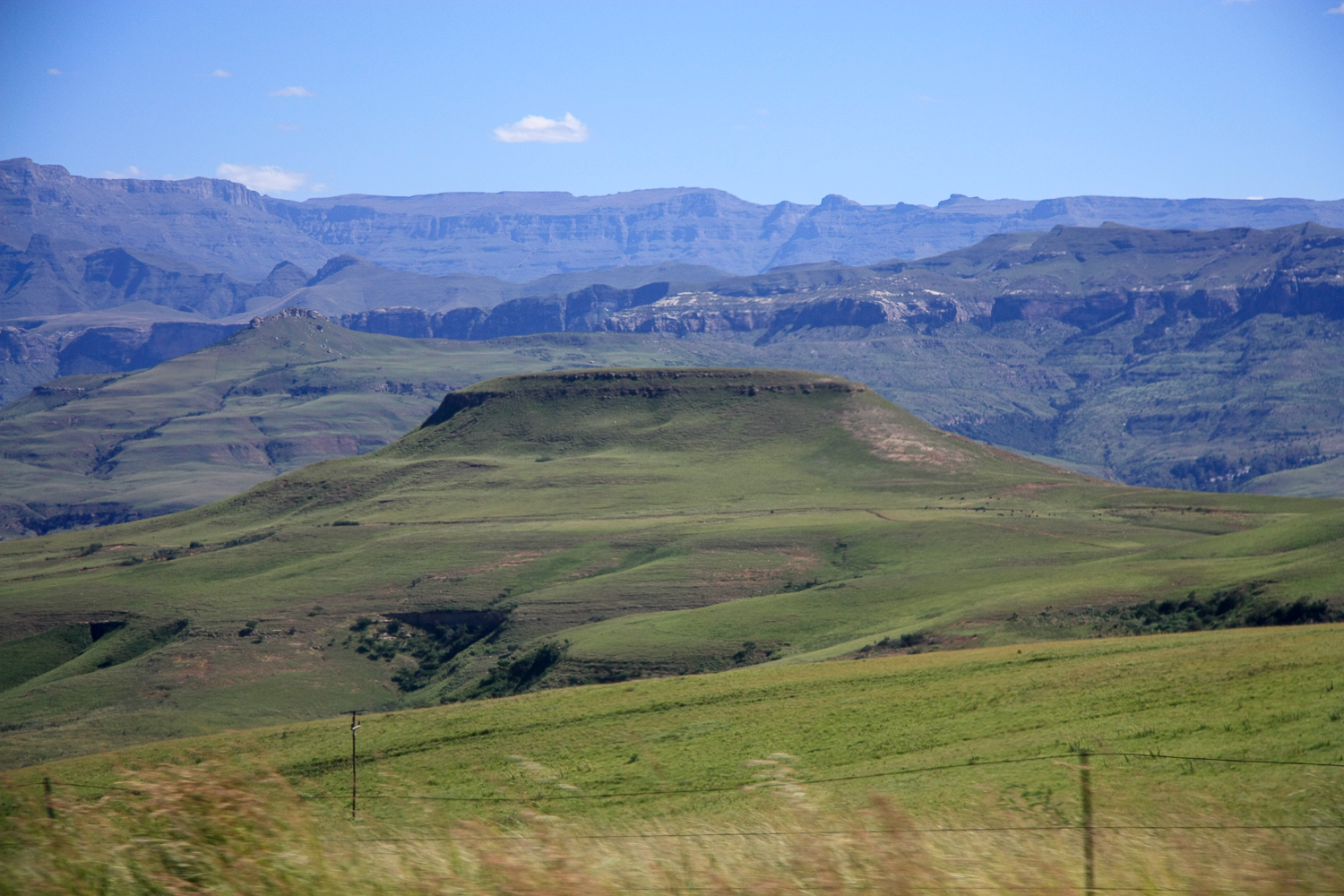 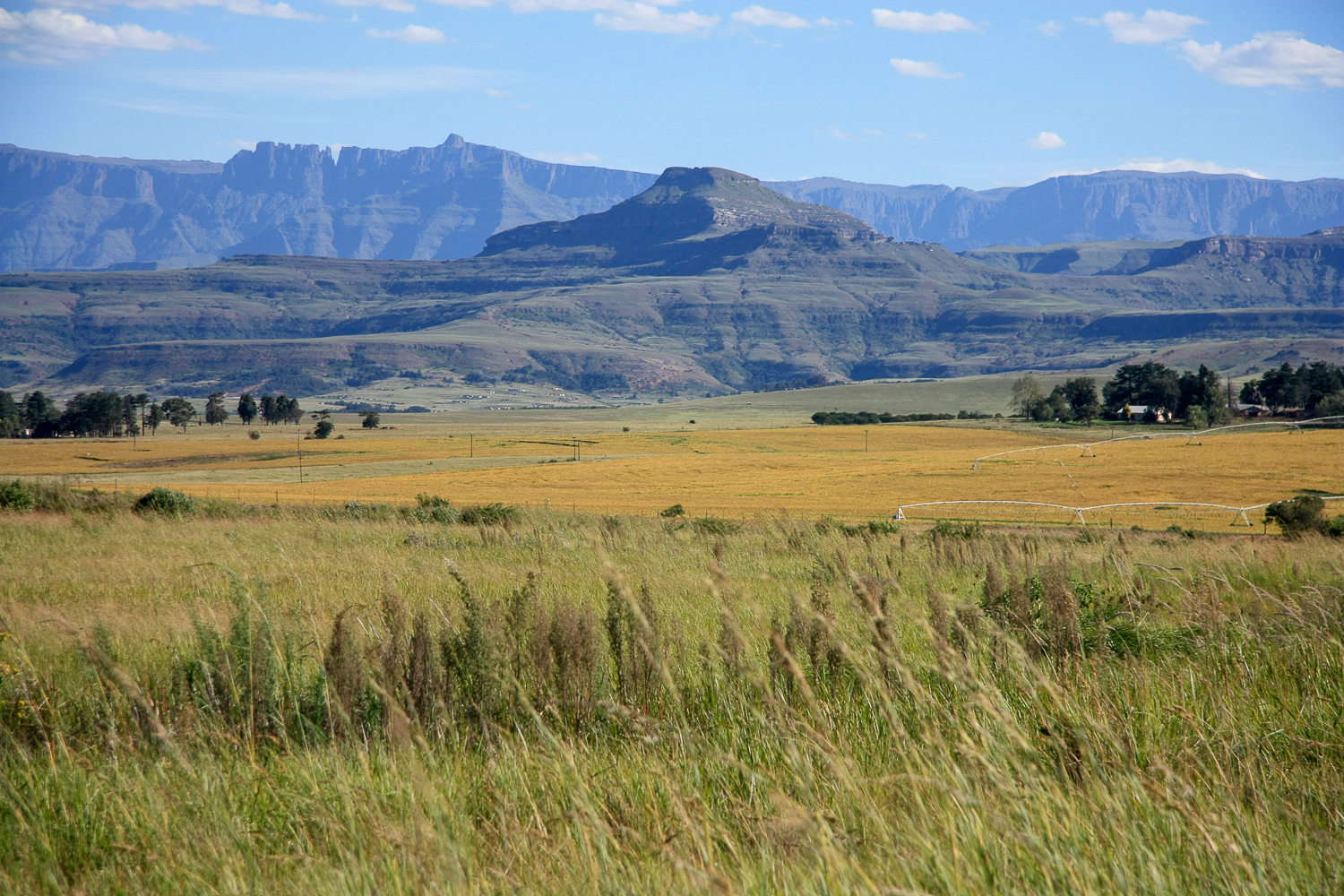 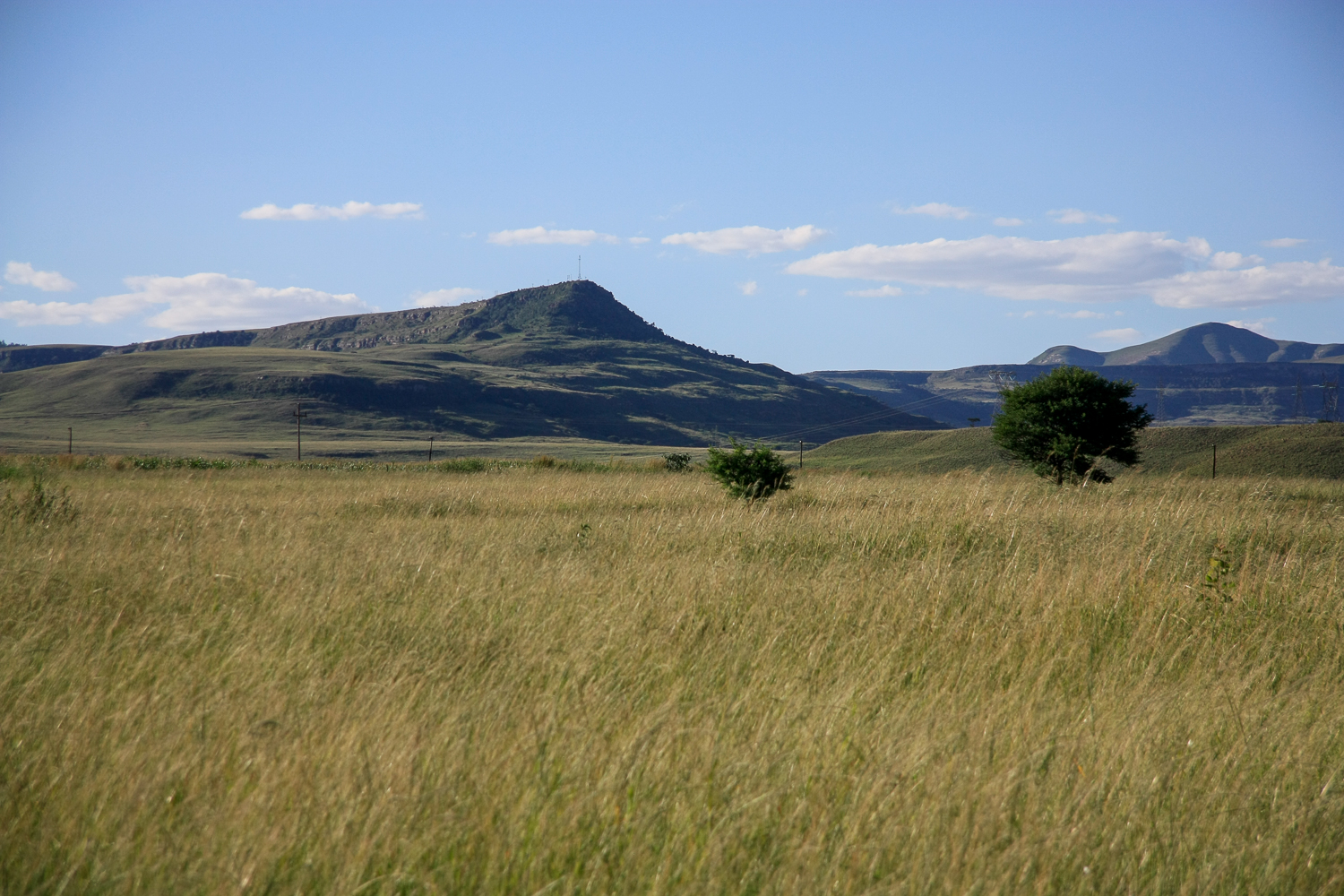 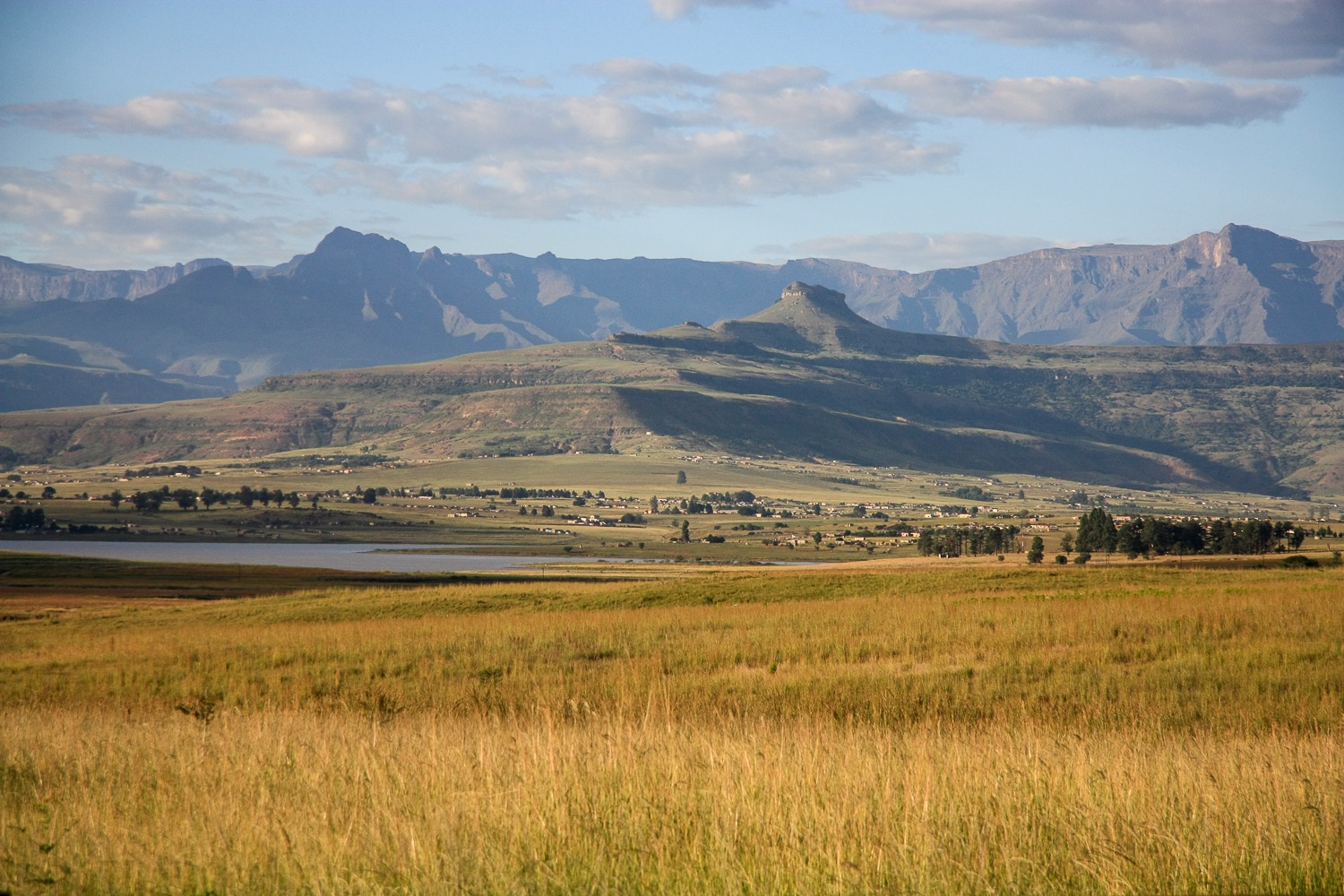 Grouping up with others who had a rental car, getting to the trailhead of the Sentinel Peak hike involved a spectacular drive already, up a gravel road barely adequate for a 2×4 sedan. And of course, the hike itself was even more beautiful, hugging the side of a giant peak, peering down on the very, very green valley below. Sadly, the Tugela Falls, supposedly the second-tallest waterfall in the world, was but a mere piddle blowing away in the wind due to the extreme drought that’s ongoing. 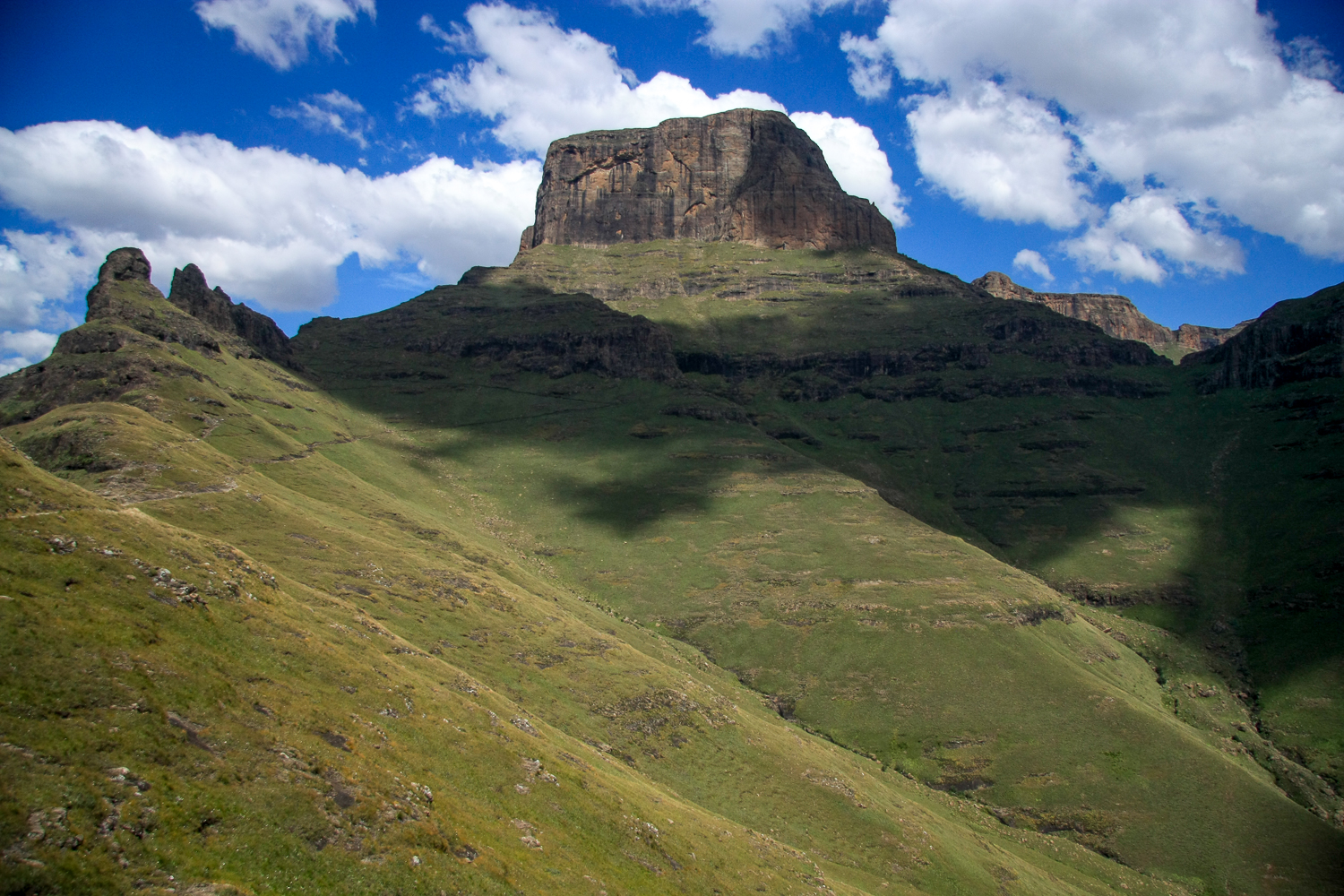 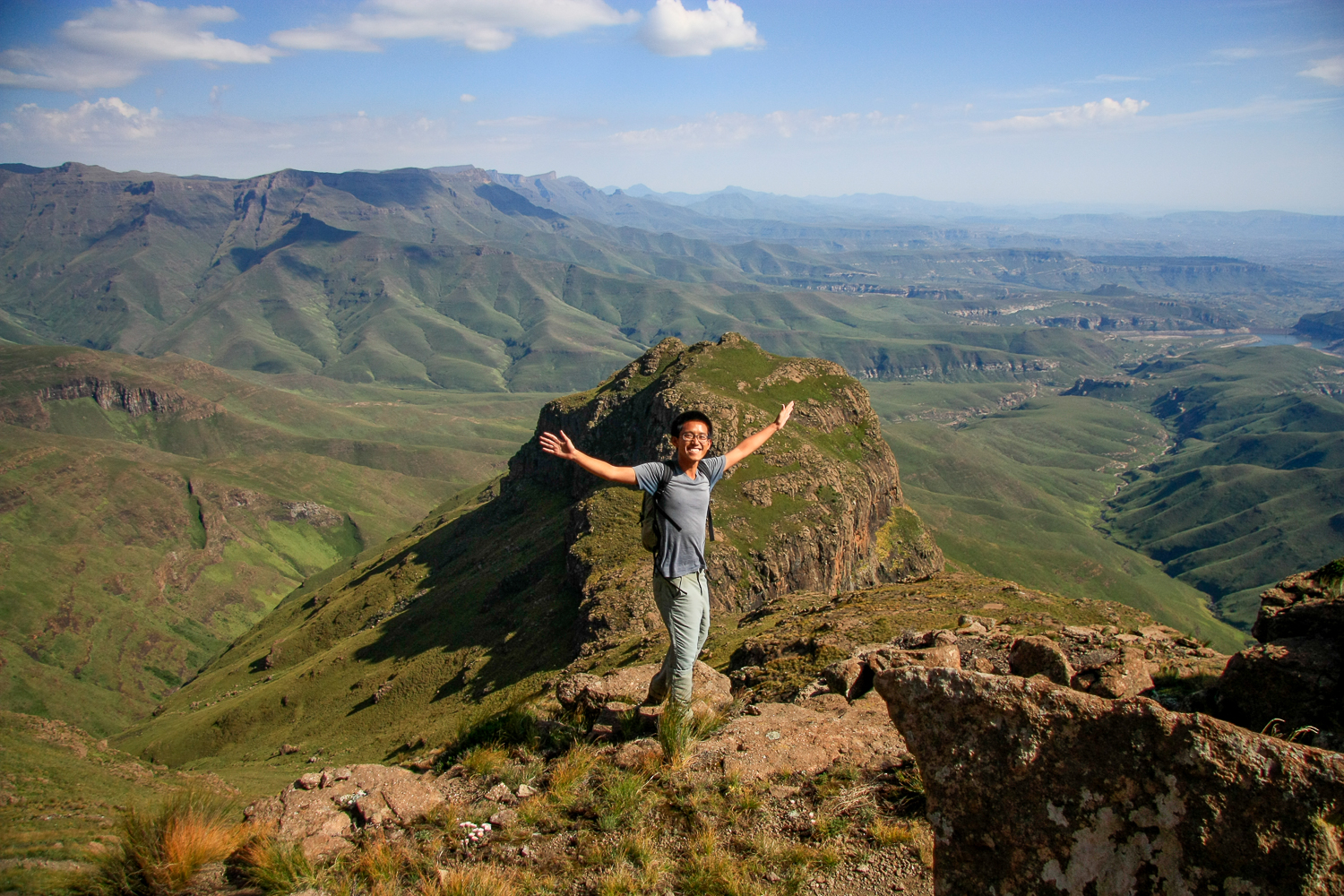 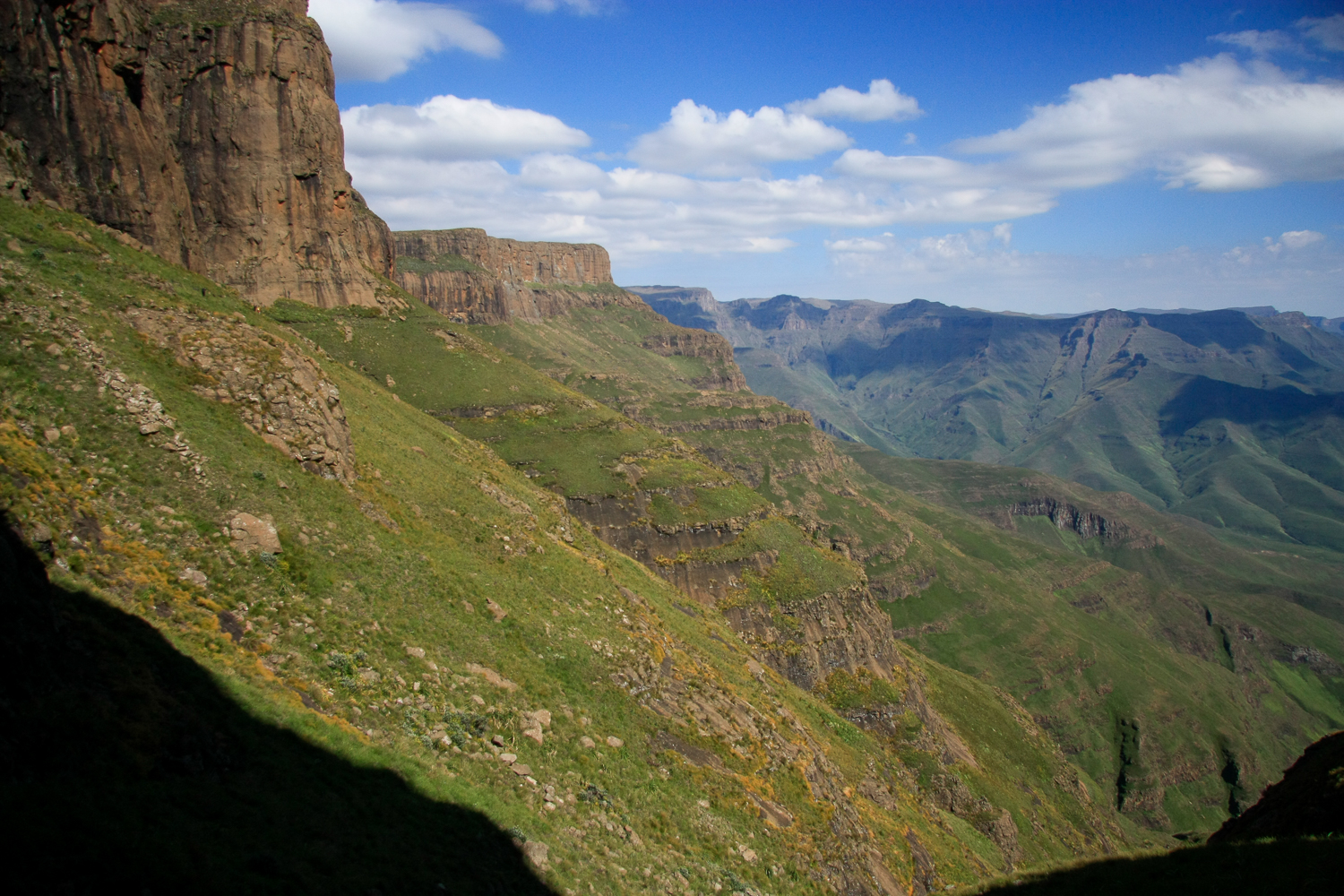 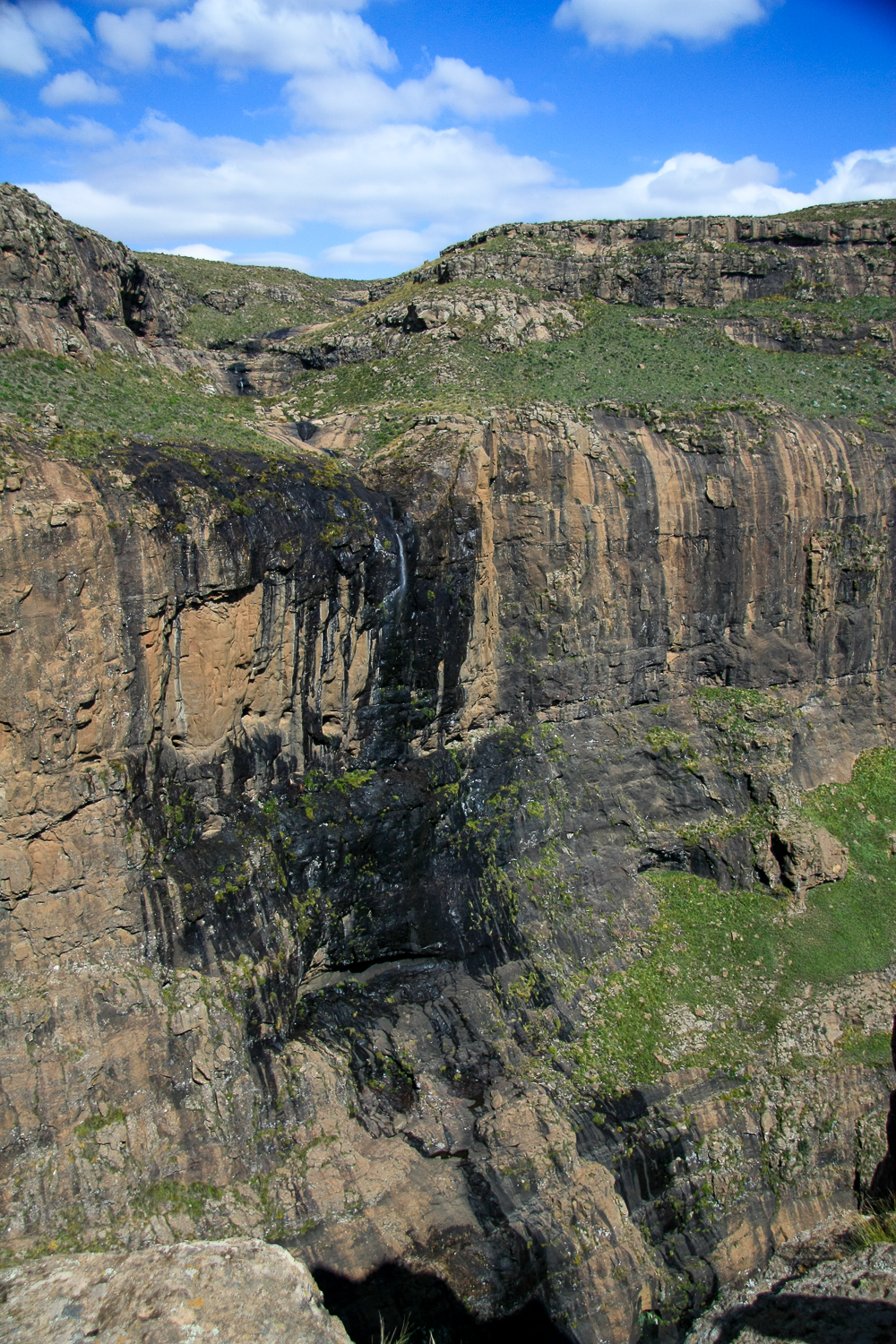 The last part of the hike involved a harrowing climb up (and down) two seemingly endless chain ladders, amid high winds. I can’t possibly fathom ever doing that in poor weather, and as someone mildly afraid of heights, even in good conditions I don’t think I’d want to repeat the experience! But the reward of getting to the top was pretty great: a beautiful plateau, the end of which is the top of another waterfall, with a splendid view of the Devil’s Tooth formation. 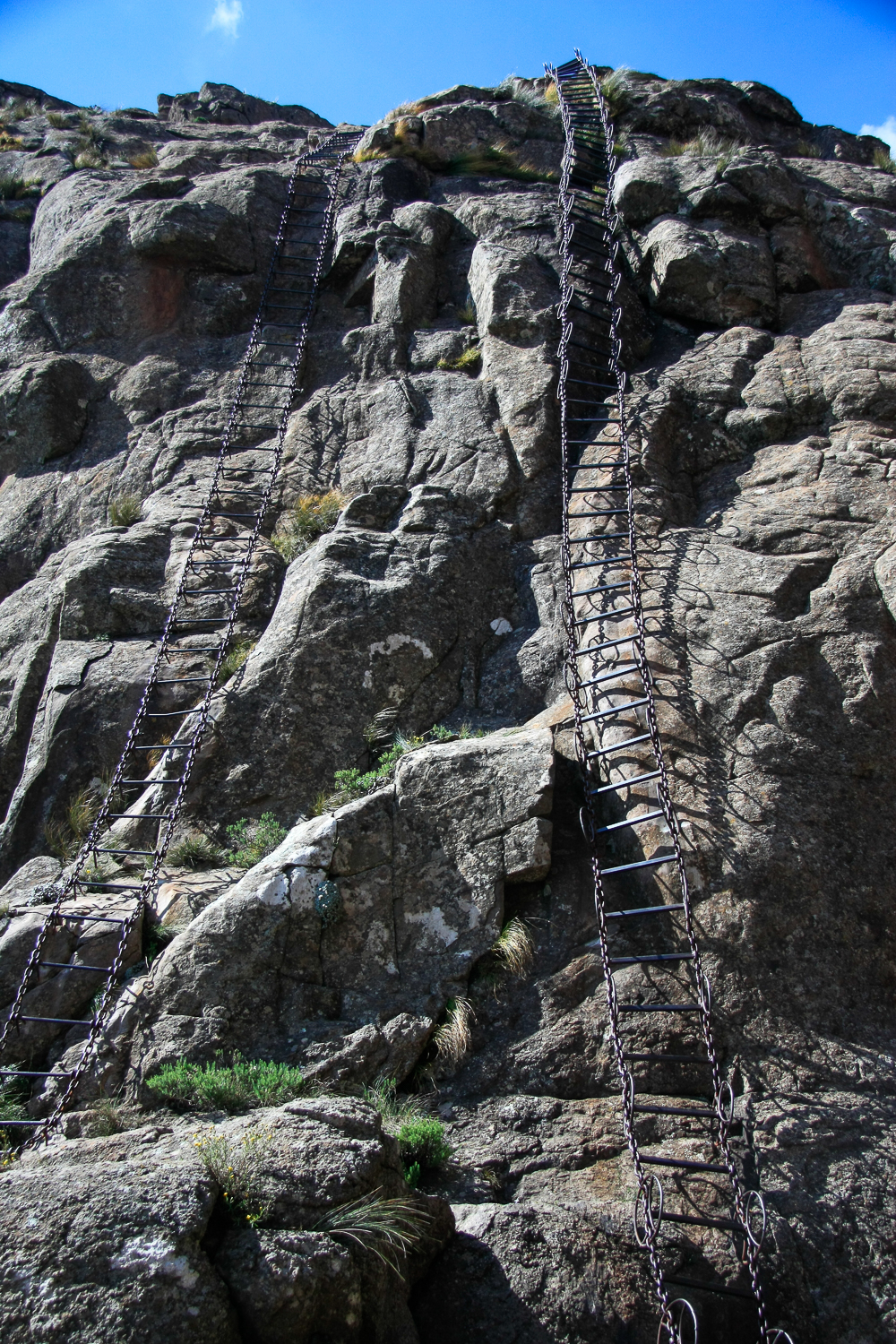 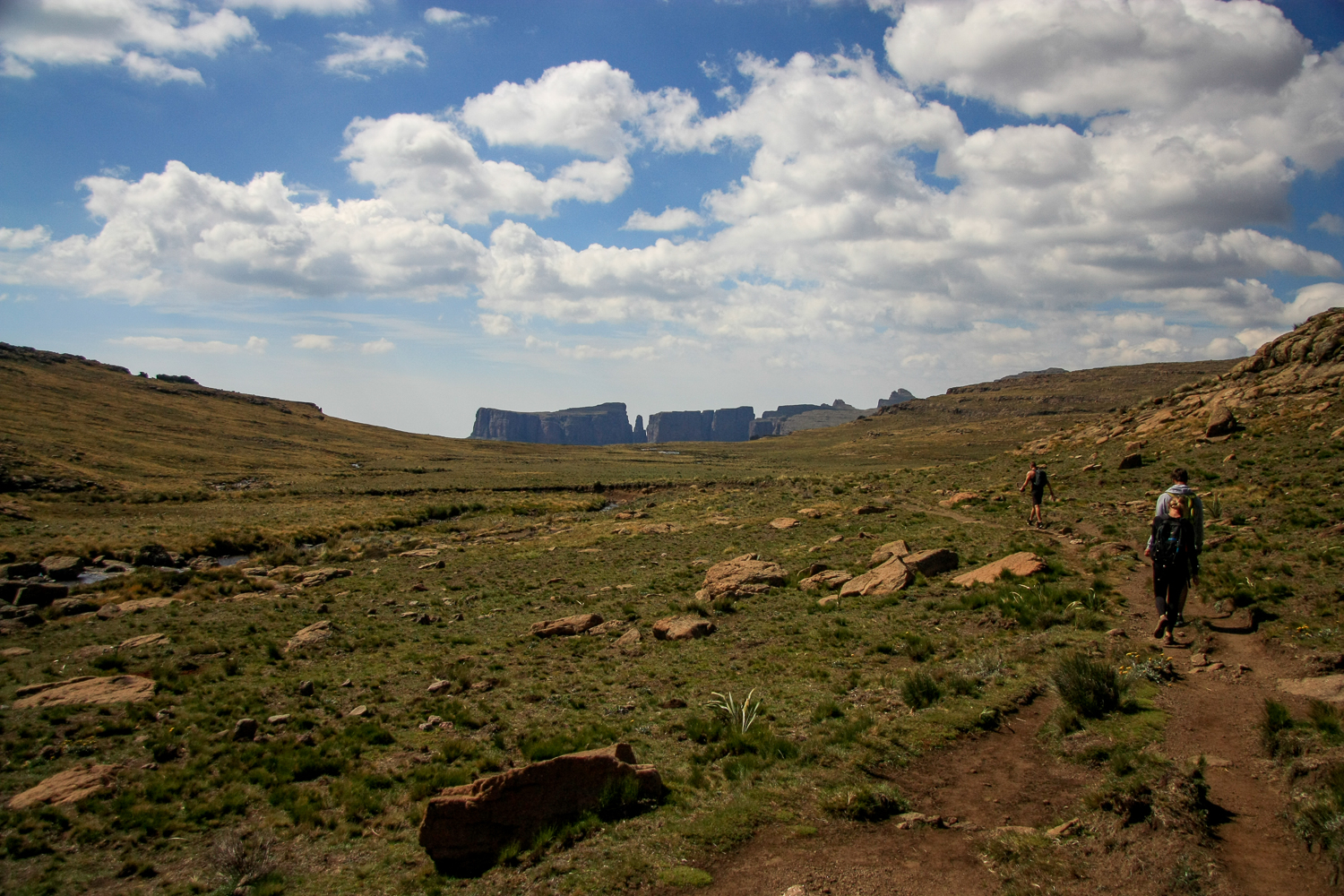 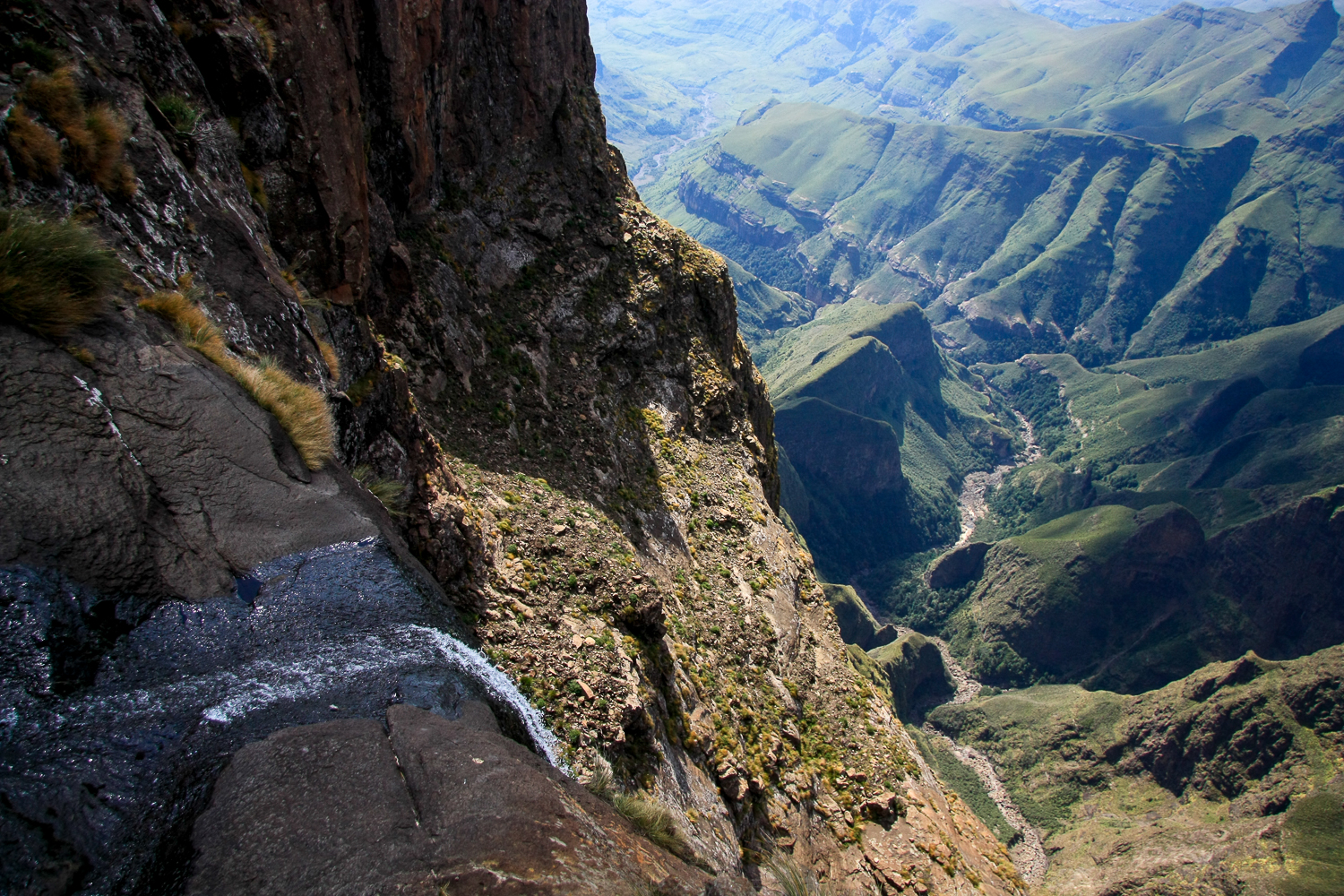 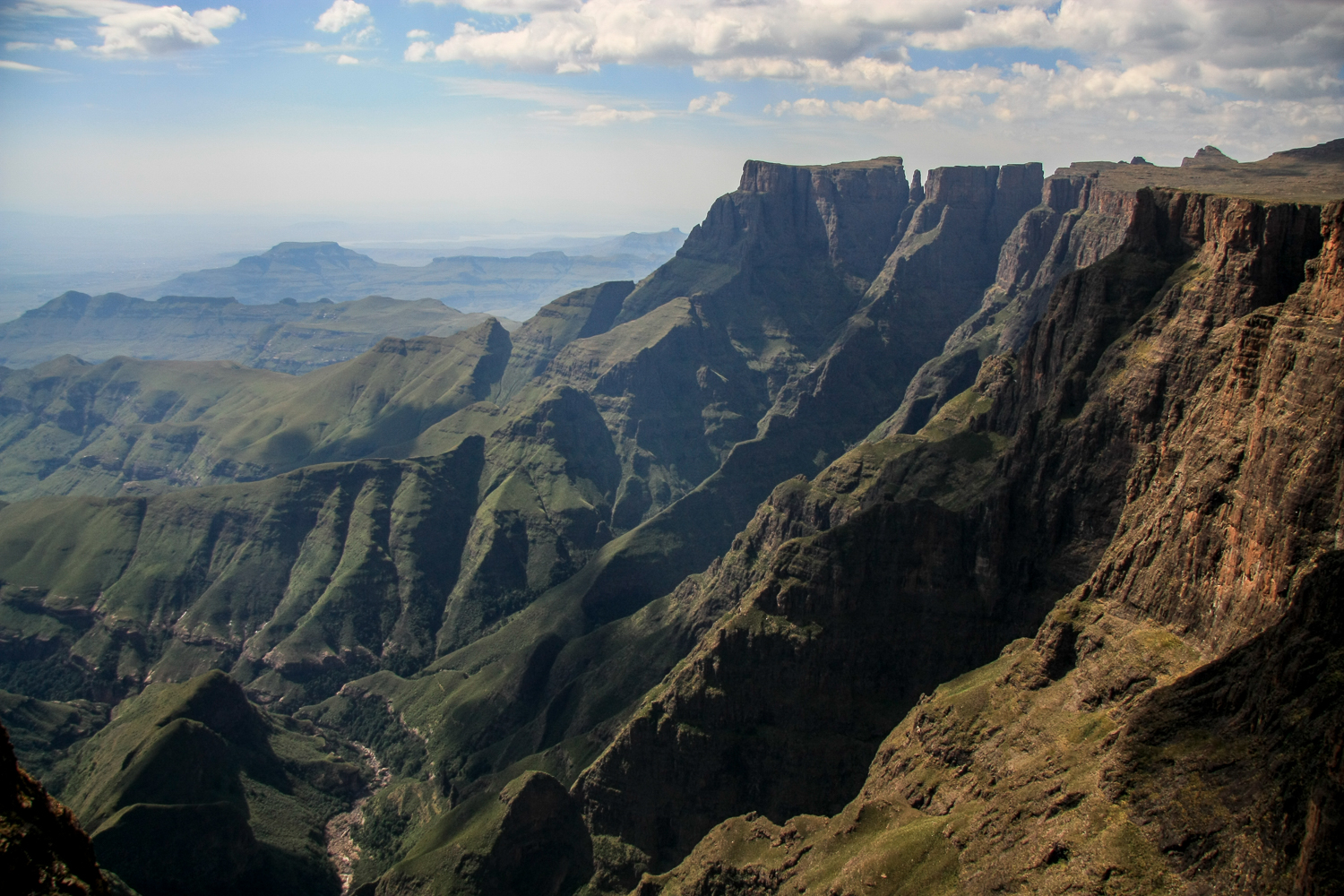 The scenery is wonderful and all, but one thing I’m lamenting is how little interaction I get with locals: being so far away town without a car really has its disadvantages. But the few times I went through towns, I got a small glimpse of life out in the rural areas. Again, it’s a little jarring: there are towns with leafy-green streets, stately houses, and yards, which are surrounded by beautiful farmland, and fancy farm-fresh goods and sustainability initiatives are advertised on the side of the road. These towns tend to be all or mostly white, and it’s virtually indistinguishable from parts of Canada — might as well be the Okanagan. Then you’ve got more working-class towns, where it’s mostly black with a smattering of white, and you see plenty of people dressed in farm clothes, farm supplies and vehicles being sold, and people buzzing around the supermarket.

And then there’s Phuthaditjhaba. A giant, sprawling, and overpopulated town that seems more like a township, while not desperately poor, the poverty is clearly visible. Every building, business, and home is a shack — which wouldn’t seem so abnormal to me were it not for the wealth a few dozen kilometres down the road. Many, many people are walking along the sides of the road since there isn’t any public transport. There’s a conspicuous lack of visitor lodging anywhere, not a hotel or a guesthouse. And due to the drought, their running water isn’t running, so people are fetching buckets. On the first of April, one day after payday, every single ATM in the town, whether at banks, gas stations, or supermarkets, had a line at least 30 people deep, with many machines out of service yet still with a line up of people waiting for it to resume service again. Despite South Africa being a developed country, this is a pretty disadvantaged area. And no wonder — it was made the capital of the Sesotho-speaking QwaQwa homeland during apartheid. (Read that “q” as a “k” simultaneously with a click sound — yes, there’s plenty of that here around here!) People were forcibly relocated there: as beautiful as the setting is, the land is fallow and inhospitable. The surrounding farmland… well, that doesn’t belong to them. 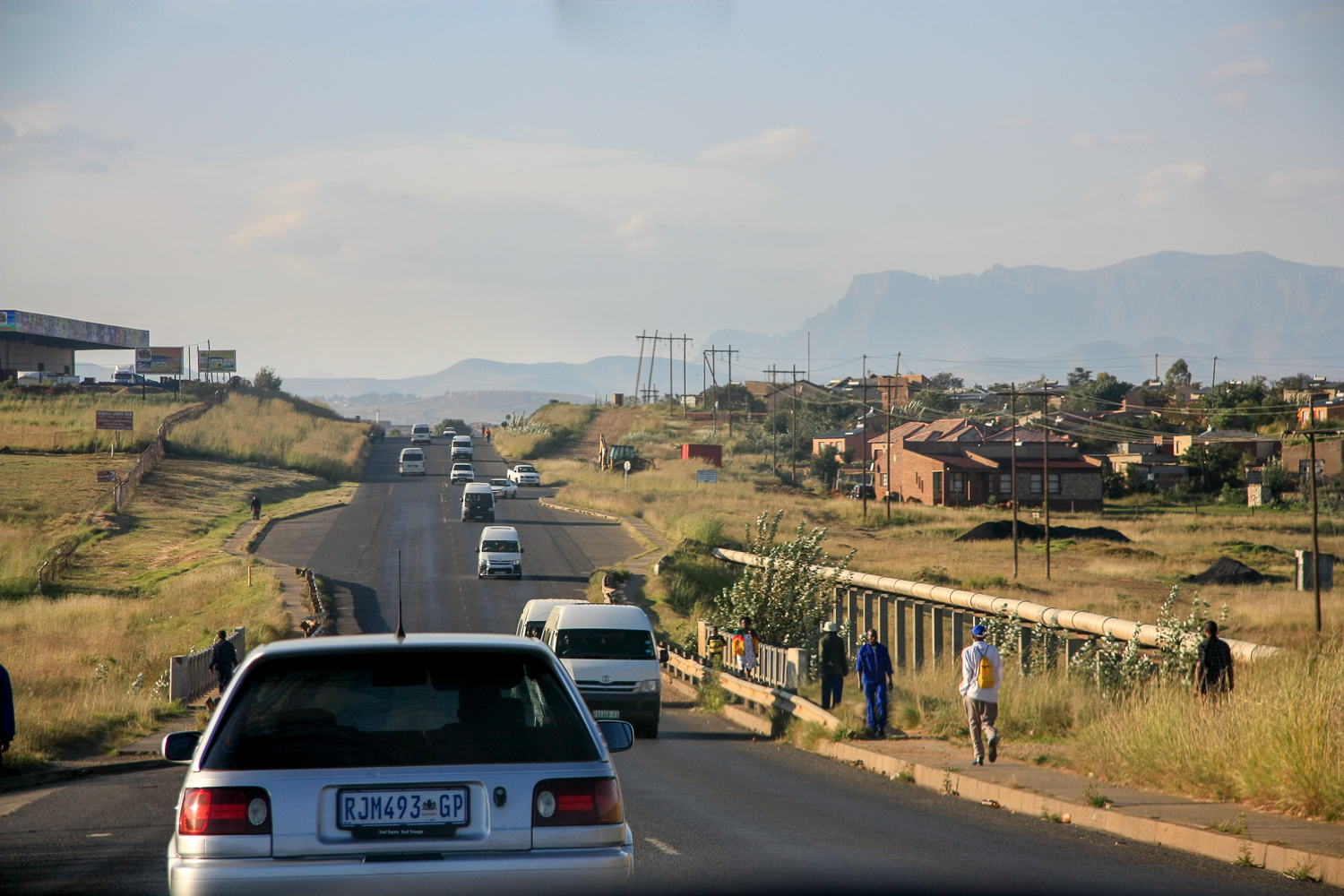 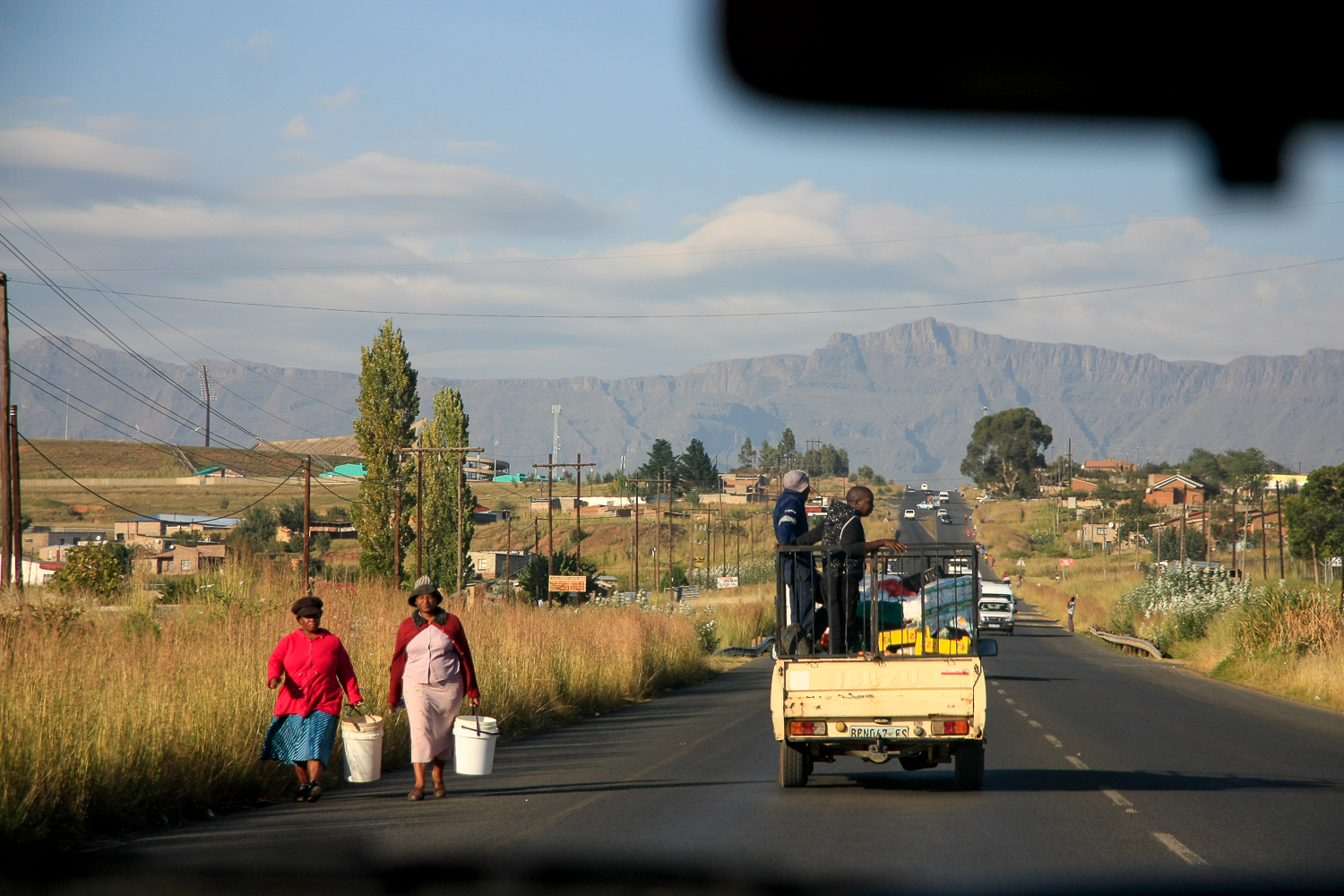 Outside of the other cities, like Ladysmith, there’s a noticable presence of townships, usually located a couple of kilometres out, maybe behind a hill. Throughout the day, you see people either walking or attempting to hitchhike between the township and the town. I’ve never seen so many hitchhikers on a highway in my life! The backpackers’ bus I was on picked up a few of the employees of a large highway gas station/rest stop that we stopped at, and dropped them off a few kilometres away on the side of the road, in what seemed like the middle of nowhere. But no, just on the horizon, you could see a small township. A few more minutes down the road, the town. 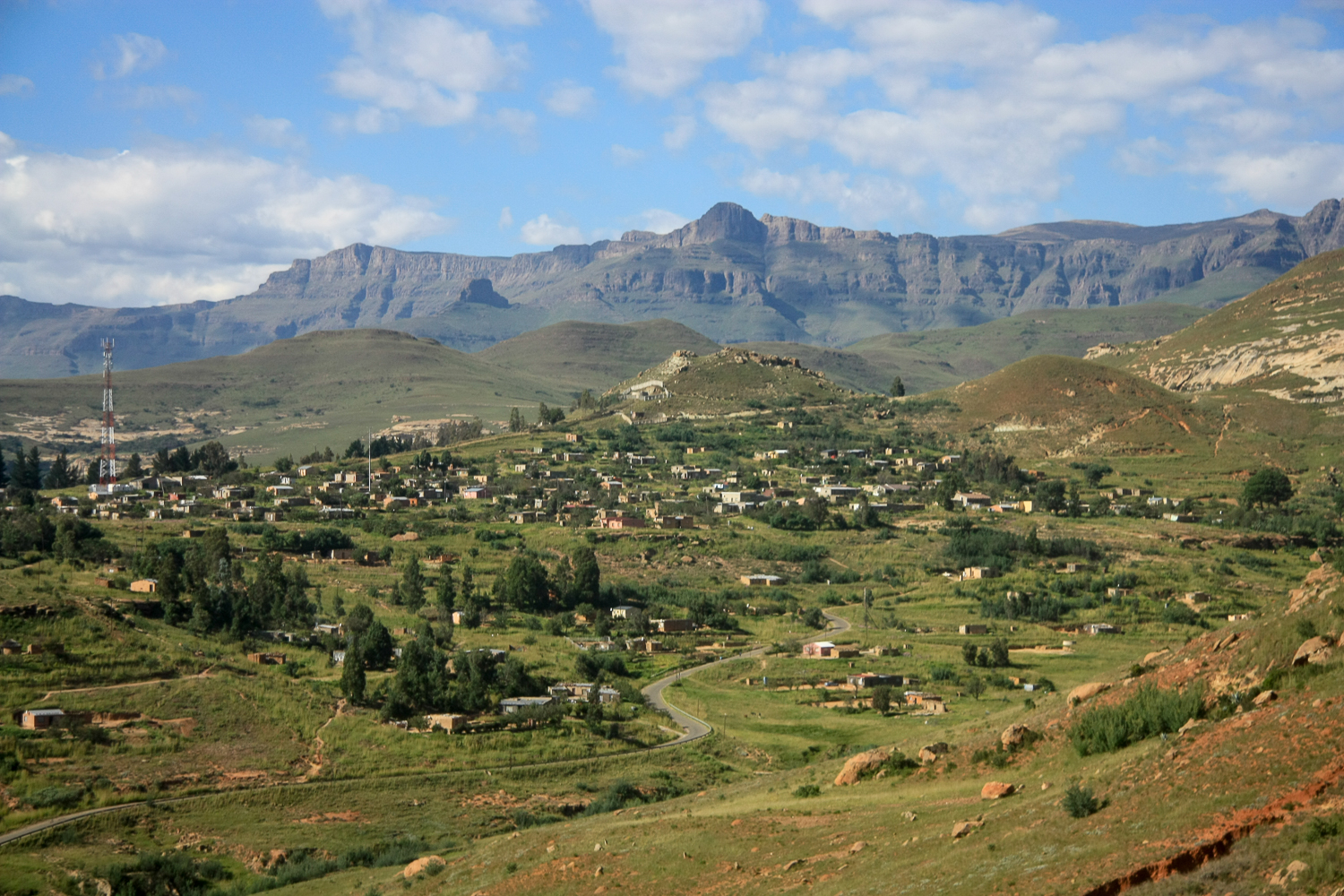 I headed deeper into the KwaZulu-Natal province to reach the southern end of the Drakensberg. The scenery continues, though there seems to be a distinct lack of residents. I stayed at a lovely lodge that served fresh bread, fresh jams, fresh honey, fresh milk and ice cream, and enjoyed the solitude of a hike up the Stromness Mountain and alongside the pools, rapids, and waterfalls of the Gxalingenwa River. 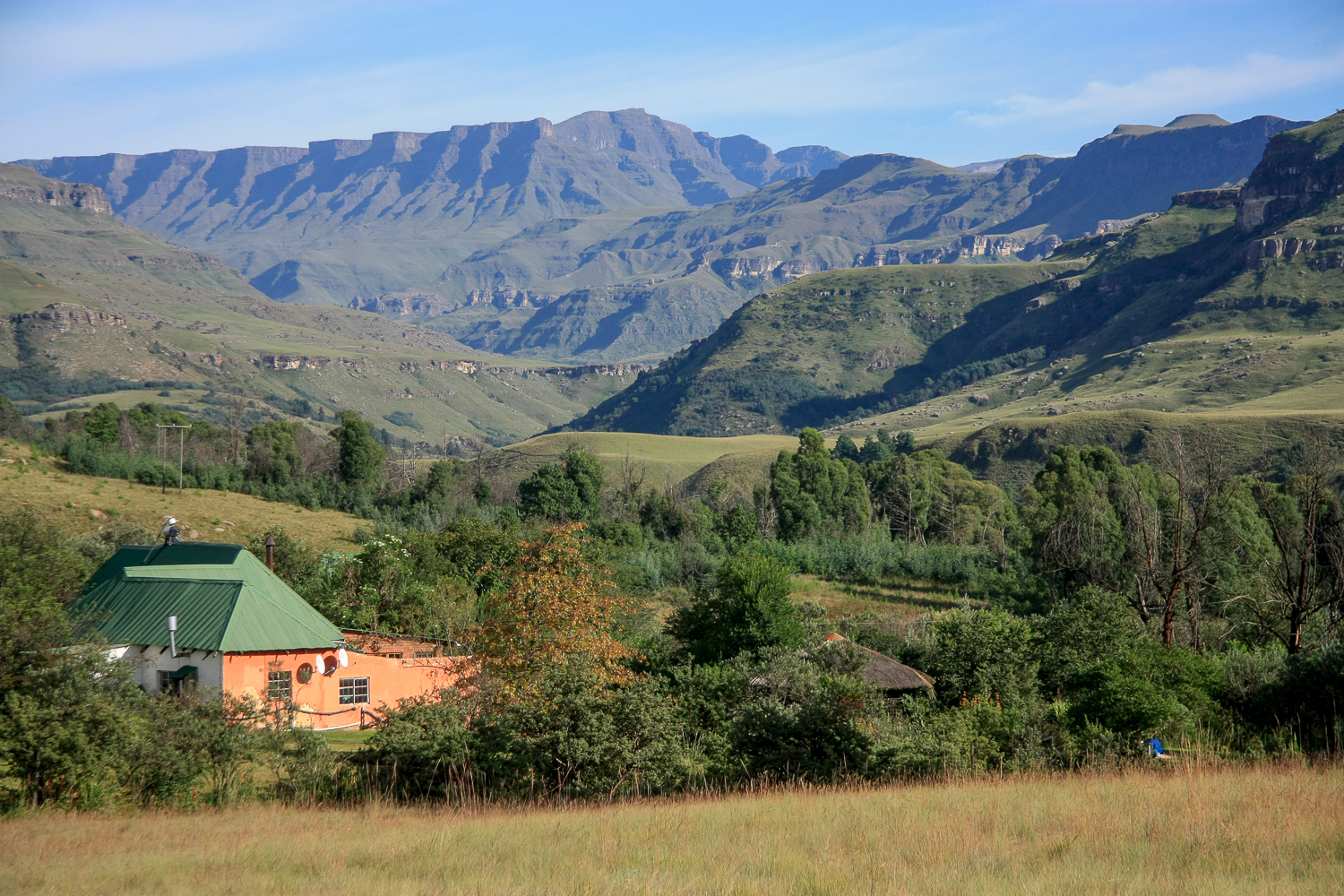 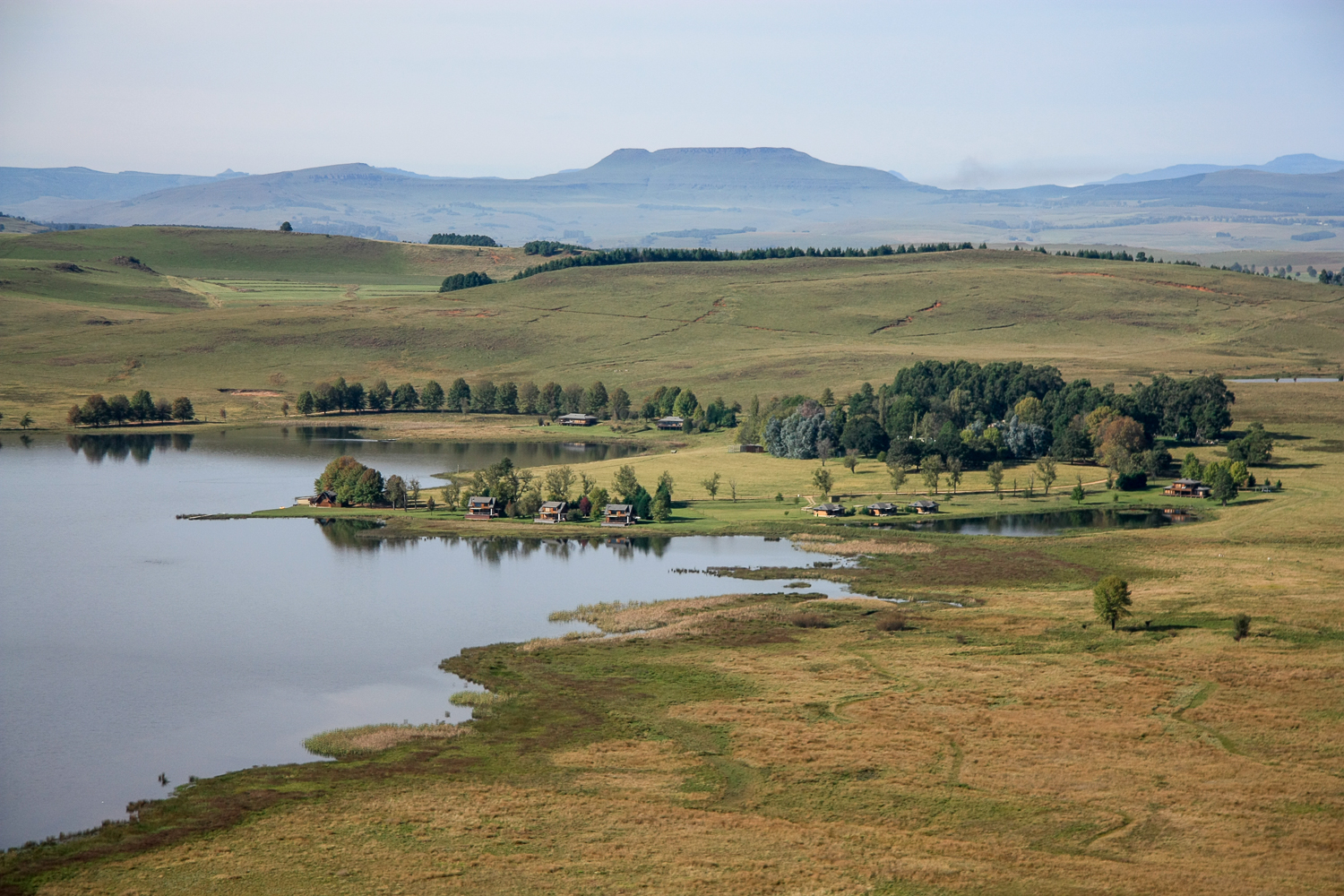 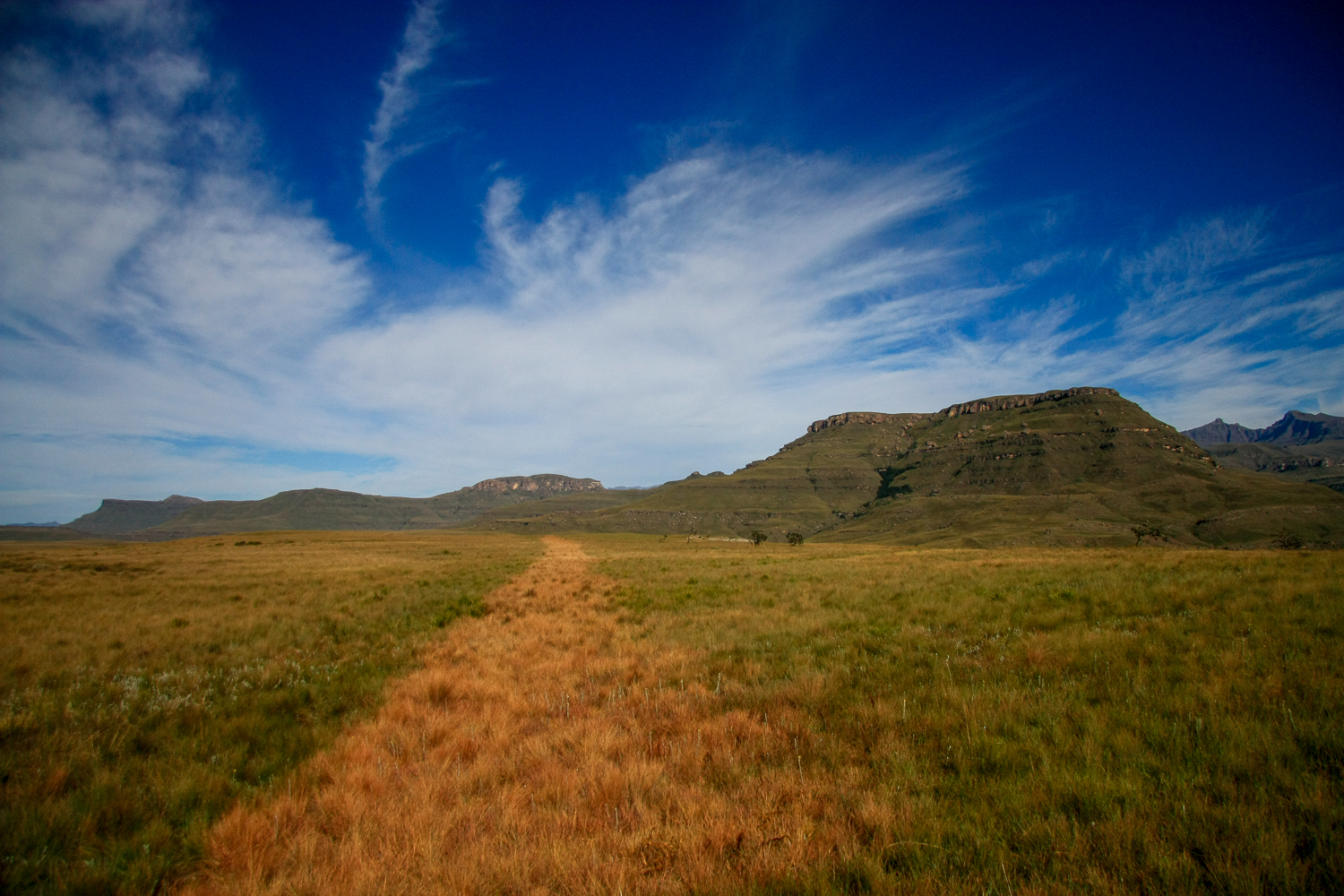 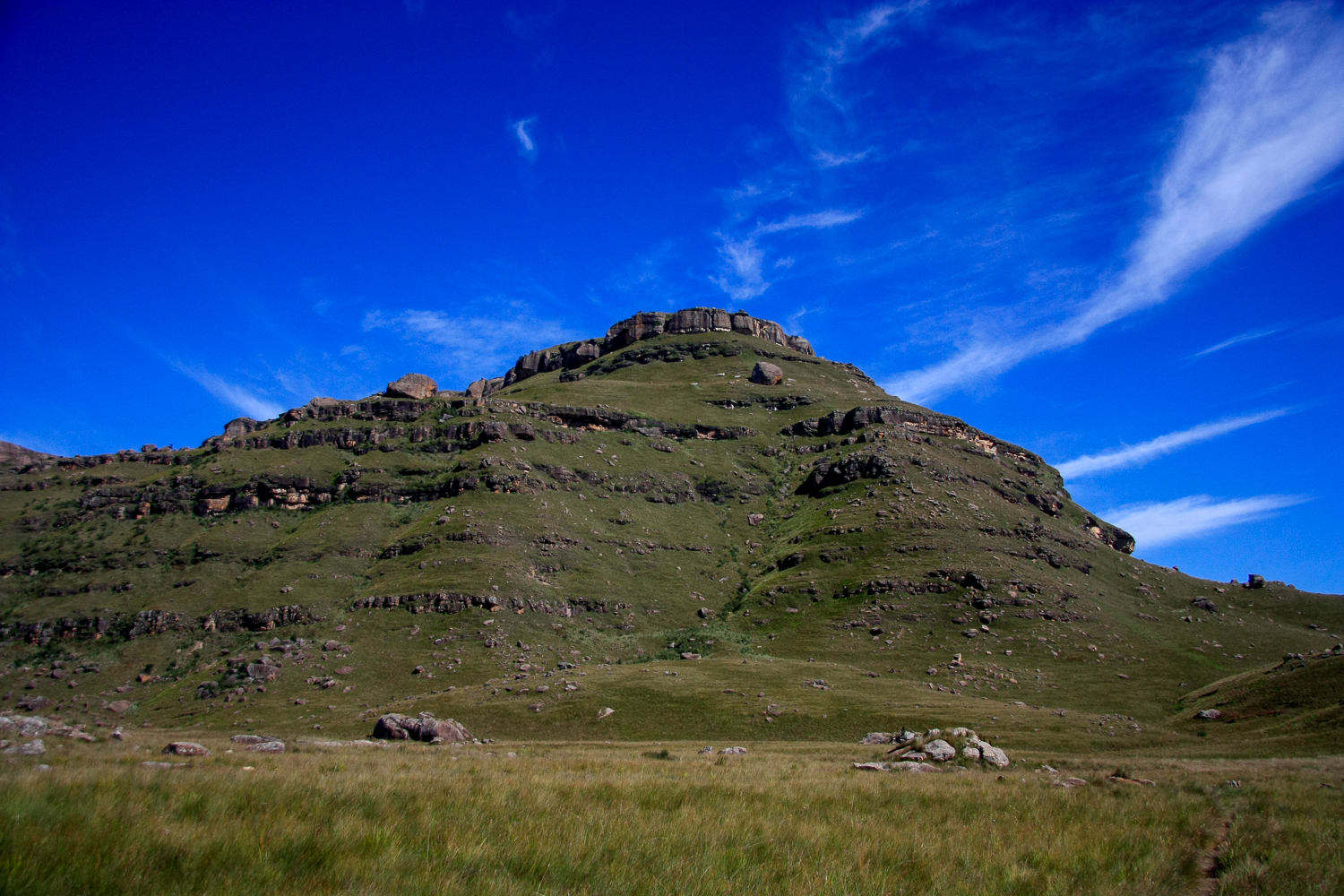 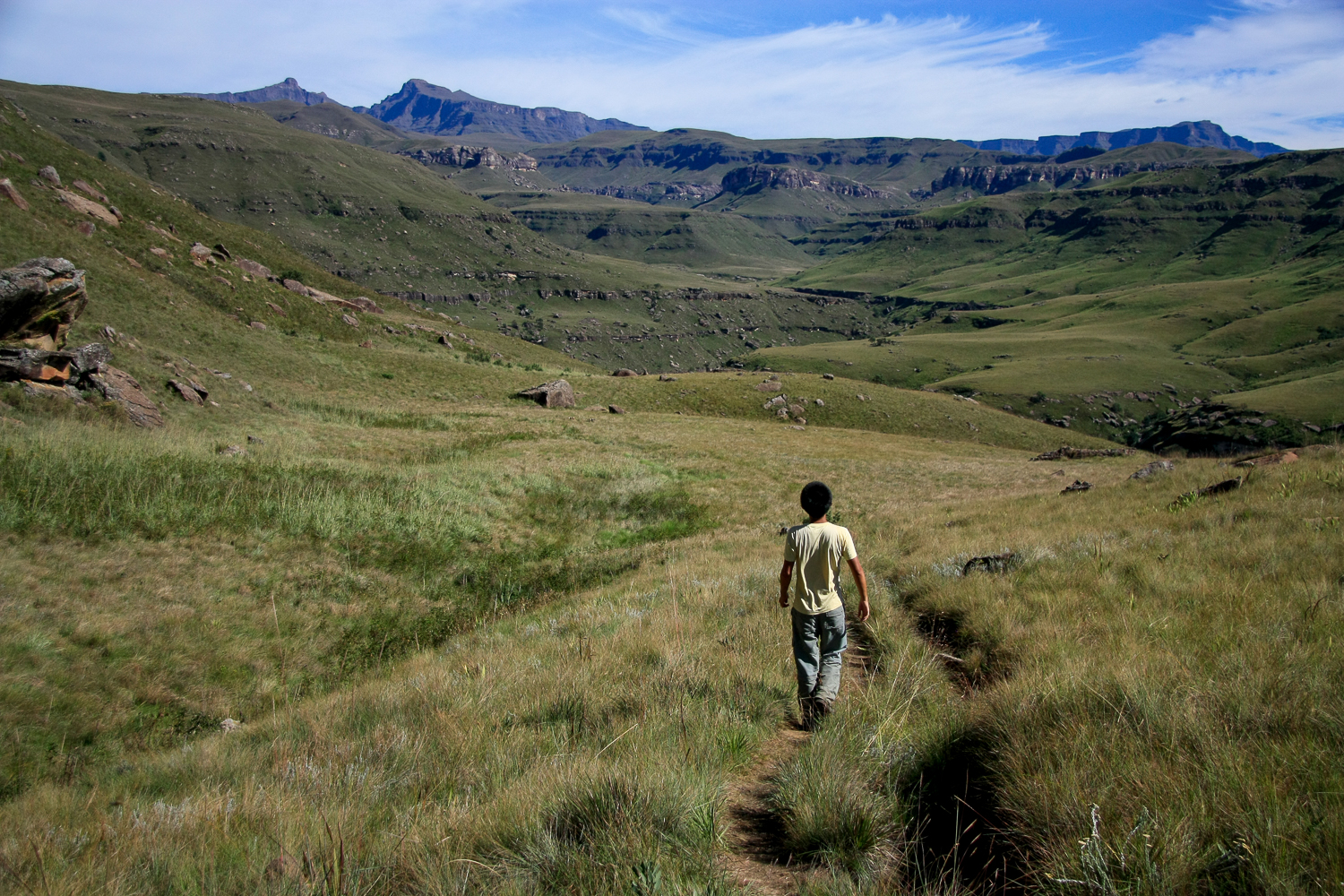 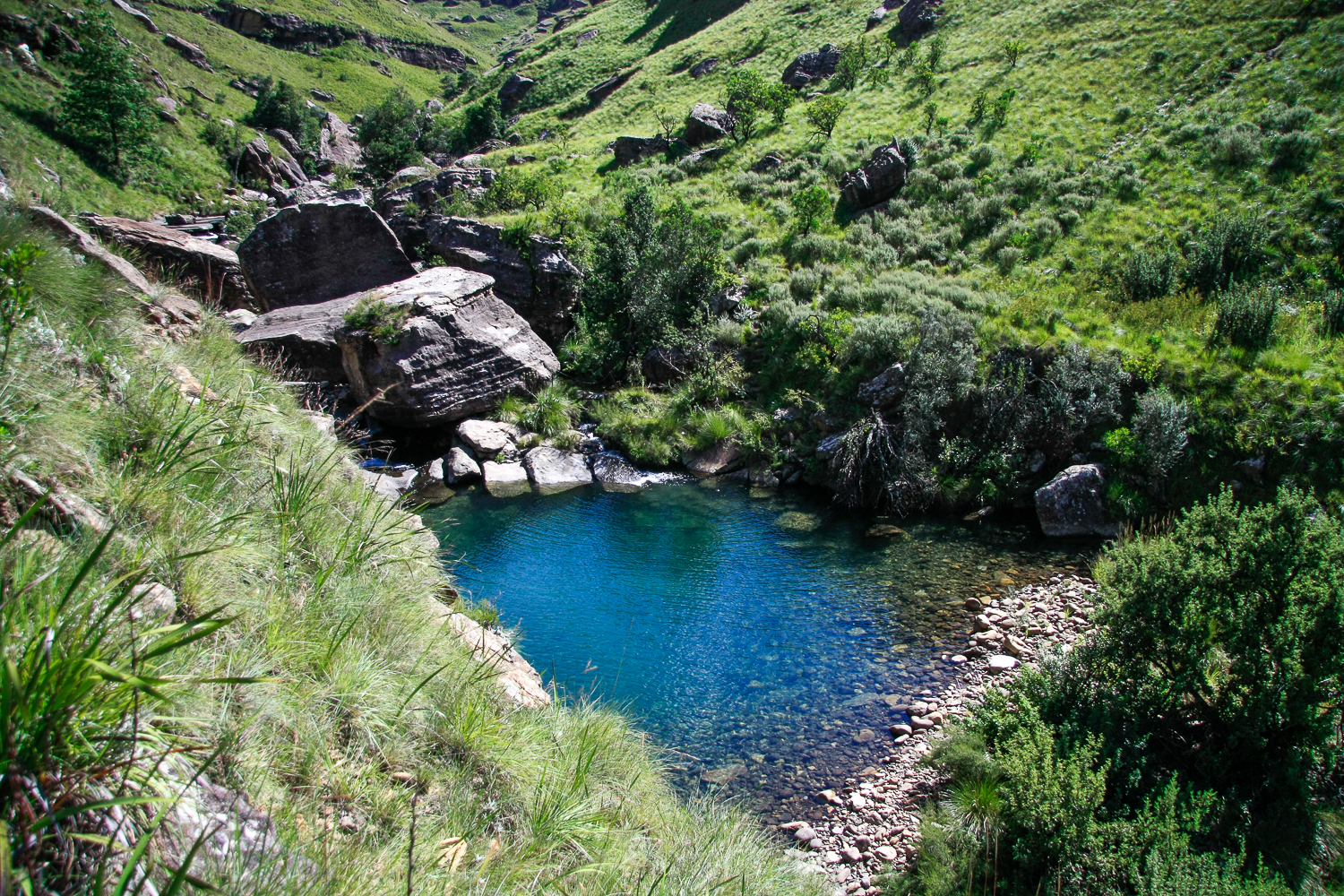 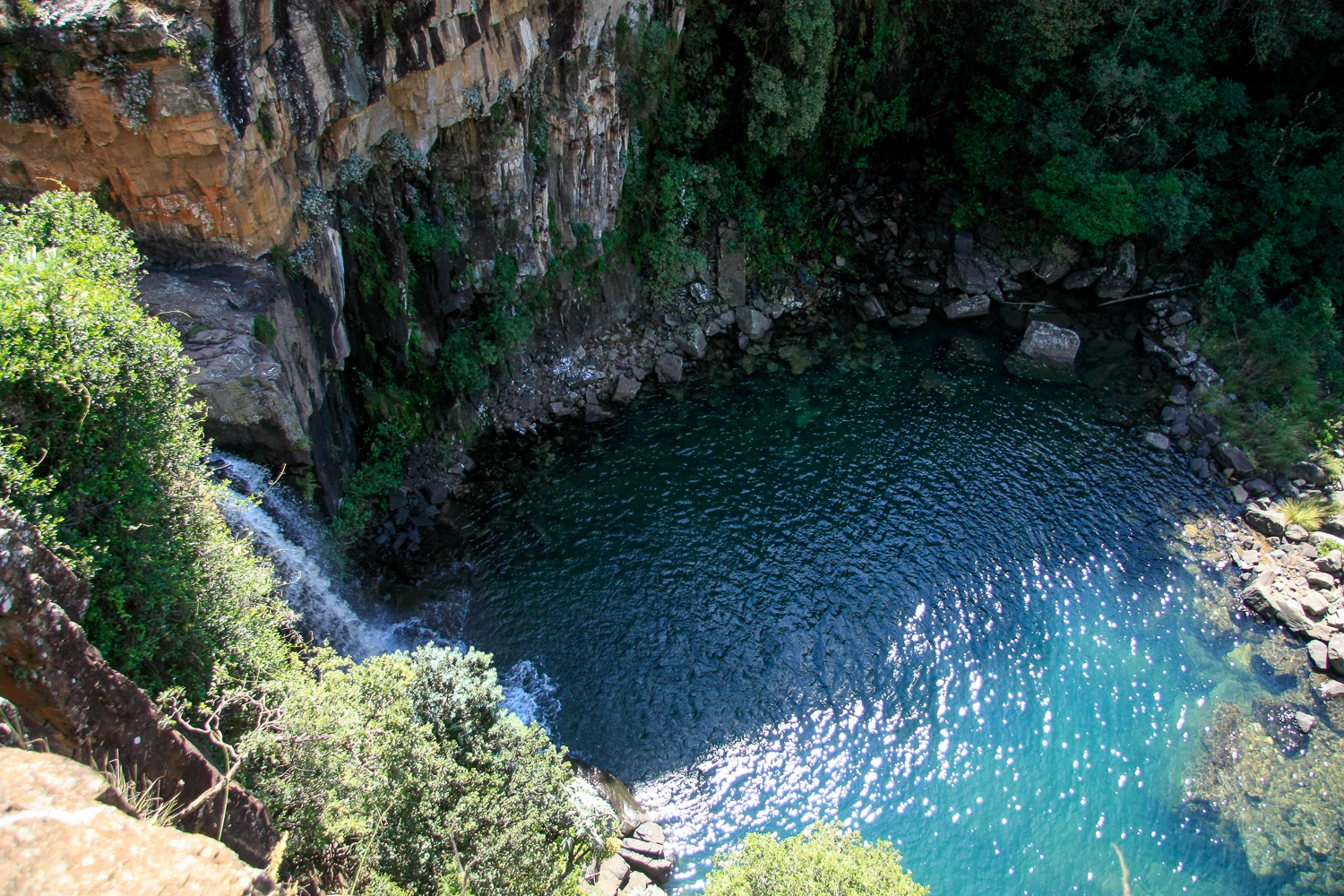 On the road along the way, despite being stuck in the backpacker bubble with little chance to interact outside of it, it was interesting to hear locals conversing in Zulu, interspersing clicks in their speech. (And in typical South African fashion, every conversation includes multiple drawn-out “alriiiiight”s and “shap shap”, which could literally mean anything in any context. Heh.) On the radio and in song, clicks sound more like a skipping tape. The towns I passed through may have had a similar wealth disparity, but perhaps the only person it bothered was me — all over, everyone seemed pretty jovial, with optimism in the air. Sounds pretty vague, I know. But hey, these were towns where just some two decades ago, not carrying a pass meant getting a beating on the street. Perhaps now’s the best it’s ever been.