“How do you know Lesotho?”

I didn’t, actually, beyond the fact that it’s a country completely surrounded by South Africa. But boy, this is a fascinating place.

Lesotho (li-su-tu) packs a punch despite its tiny size, and doesn’t feel at all like any other country. I first did a daytrip to the village of Mafika-Lisiu (di-si-ew; the orthography is weird) from the northern Drakensberg, just past a remote border post and relatively inaccessible. Enamoured by the rolling fields of purple cosmos flowers, the resolutely traditional but friendly people, the fact that it’s the highest country in the world (its lowest point is at 1400 m, and most of the country is above 1800 m), and the story behind its survival as an independent state — the largest of the four enclaves in the world, ahead of San Marino (within Italy), Vatican City (Italy), and Monaco (France) — I resolved to return, minus the unwieldy daytrip tour crowd of 20 people.

Besides, given my frustrations with South Africa’s lack of public transit, returning to a land full of minibus taxis and leave-when-full vehicles was more than welcome, and a last hurrah to being in a part of “African” Africa. I don’t know why Lesotho gets skipped over for its reputation of being difficult for independent travellers — it isn’t terribly so, and deserves far more visitors than what it’s got! 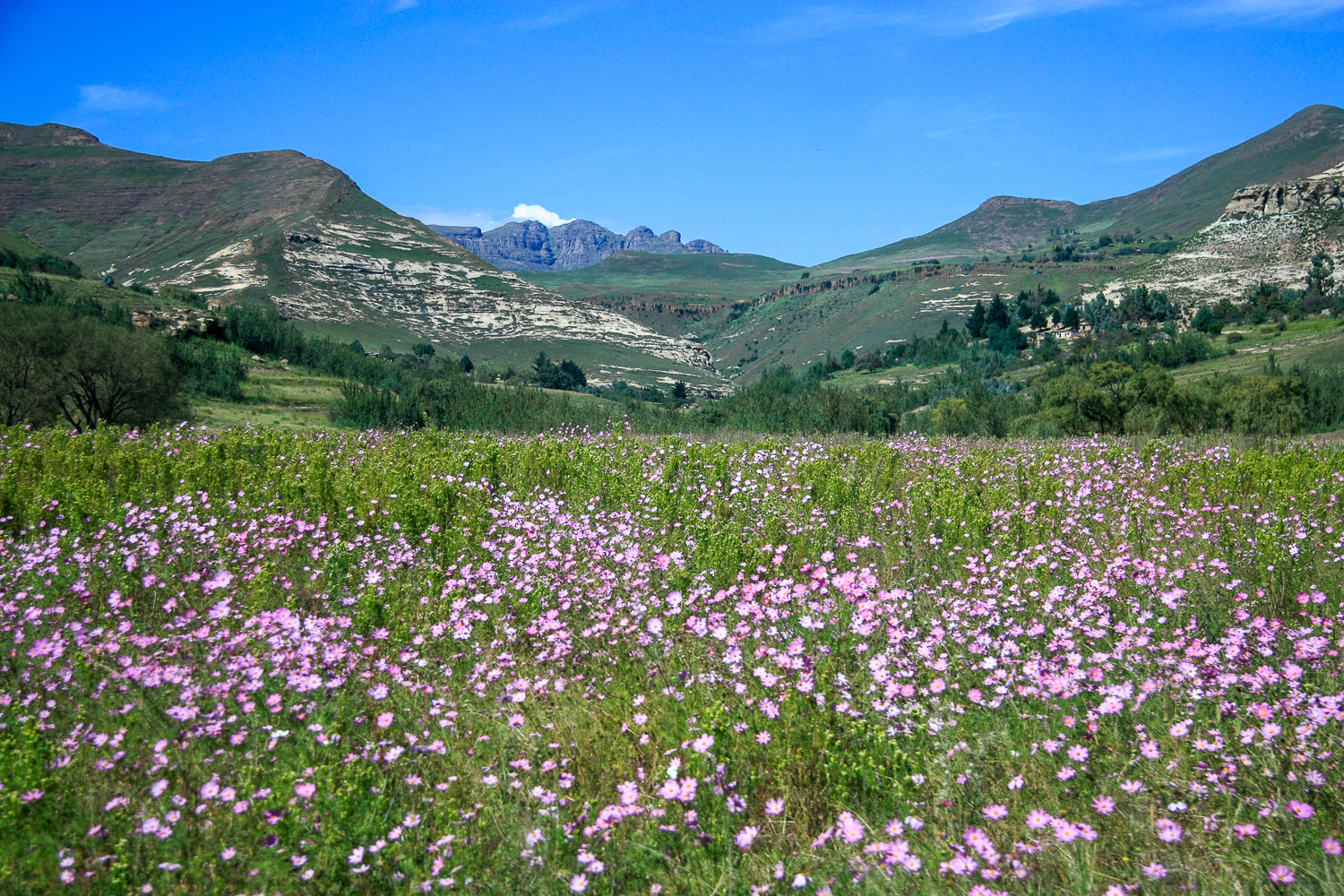 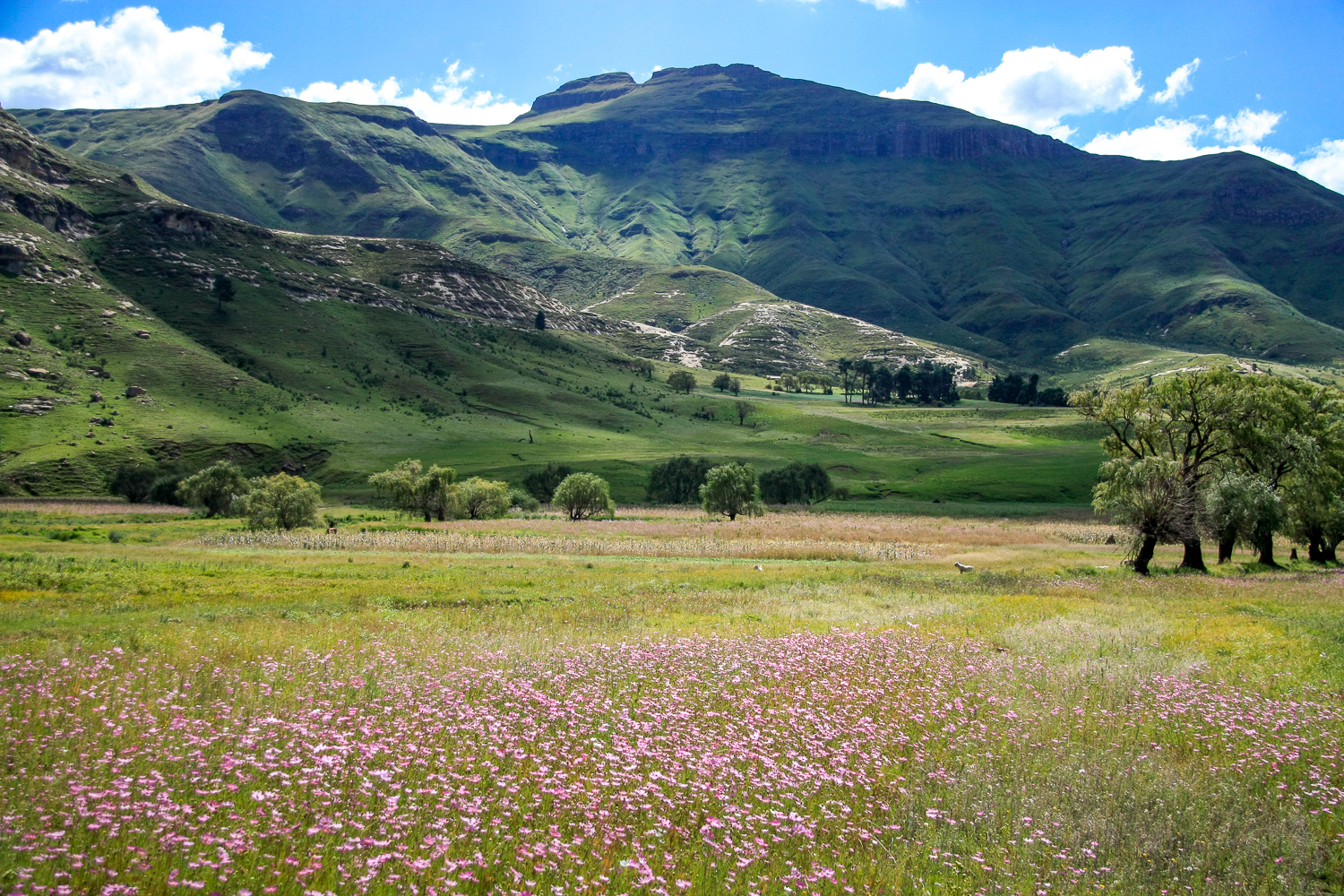 On the daytrip, we first visited a local school, where the headmistress gave us a warm welcome then surprisingly went into a rant about how post-secondary institutions in Lesotho require students to first master English to be eligible. Before the days of current Lesotho, King Moshoeshoe (mu-shwe-shwe) was just the leader of a small village, but by continuing to defend his people from atop a mountain and harbouring refugees seeking safety, he was successful in fending off the Zulu, British, and the Boers, while growing his Sotho tribe. The hills were such that there was no way to ascend at night before daylight, and Moshoeshoe’s soldiers would simply throw boulders at invading soldiers. After much fighting with the Boers, Moshoeshoe sought help from Queen Victoria and gave away some land to the British in exchange for being a protectorate, called Basutoland. While the locals resented British rule to an extent, the Union of South Africa was formed around it without including it, and that turned out to be a good thing for Basutoland — those that stayed in the country (many worked in South Africa) weren’t affected by apartheid. Fast forward a bit: Basutoland became independent Lesotho, and the current king, Letsie III, is now just a figurehead while parliament rules. But anyway, English is a remnant of colonial times. Though a surprisingly high 85% of Basotho (one Masotho, two Basotho, speak Sesotho, live in Lesotho) are literate, few speak English outside of urban areas. 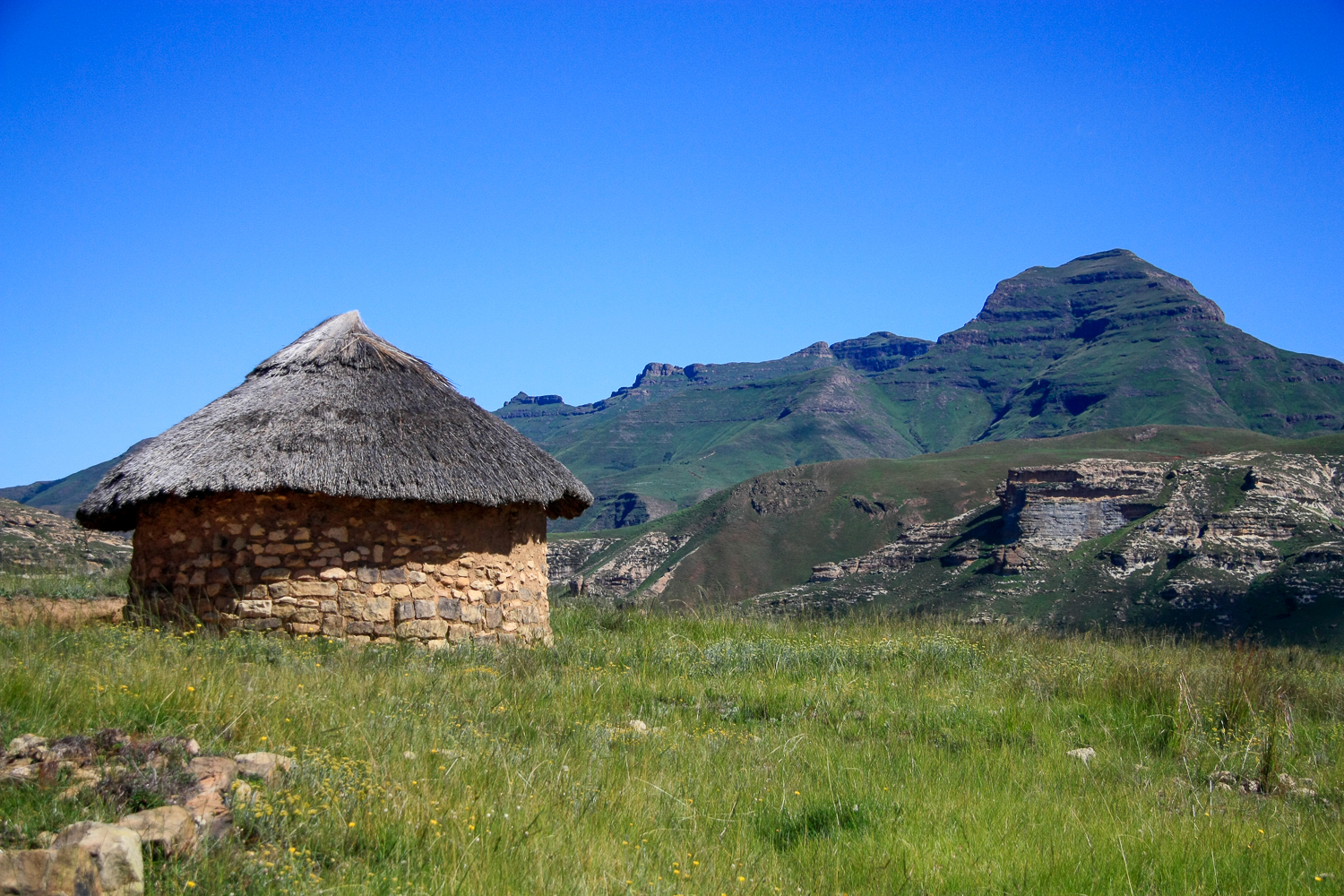 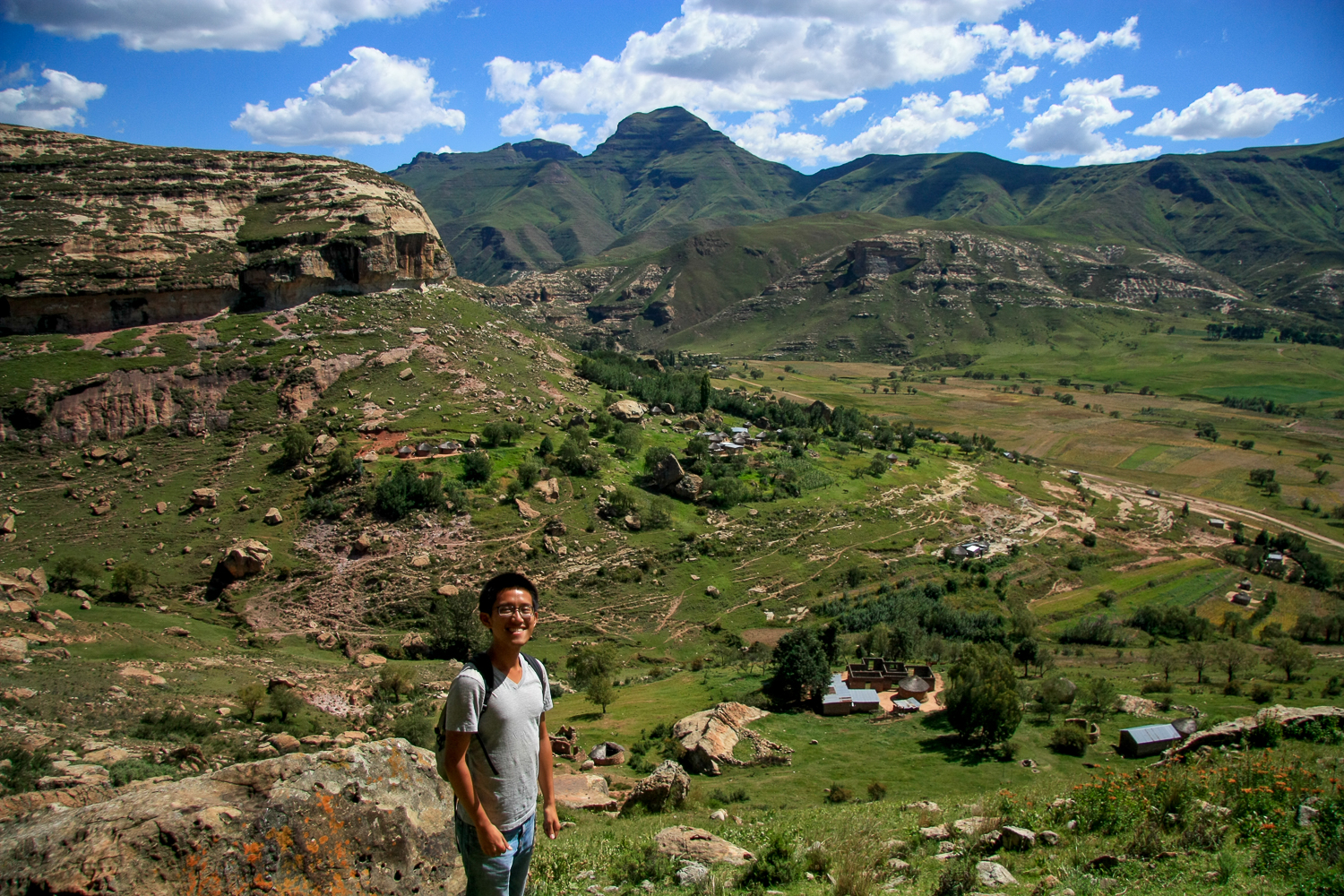 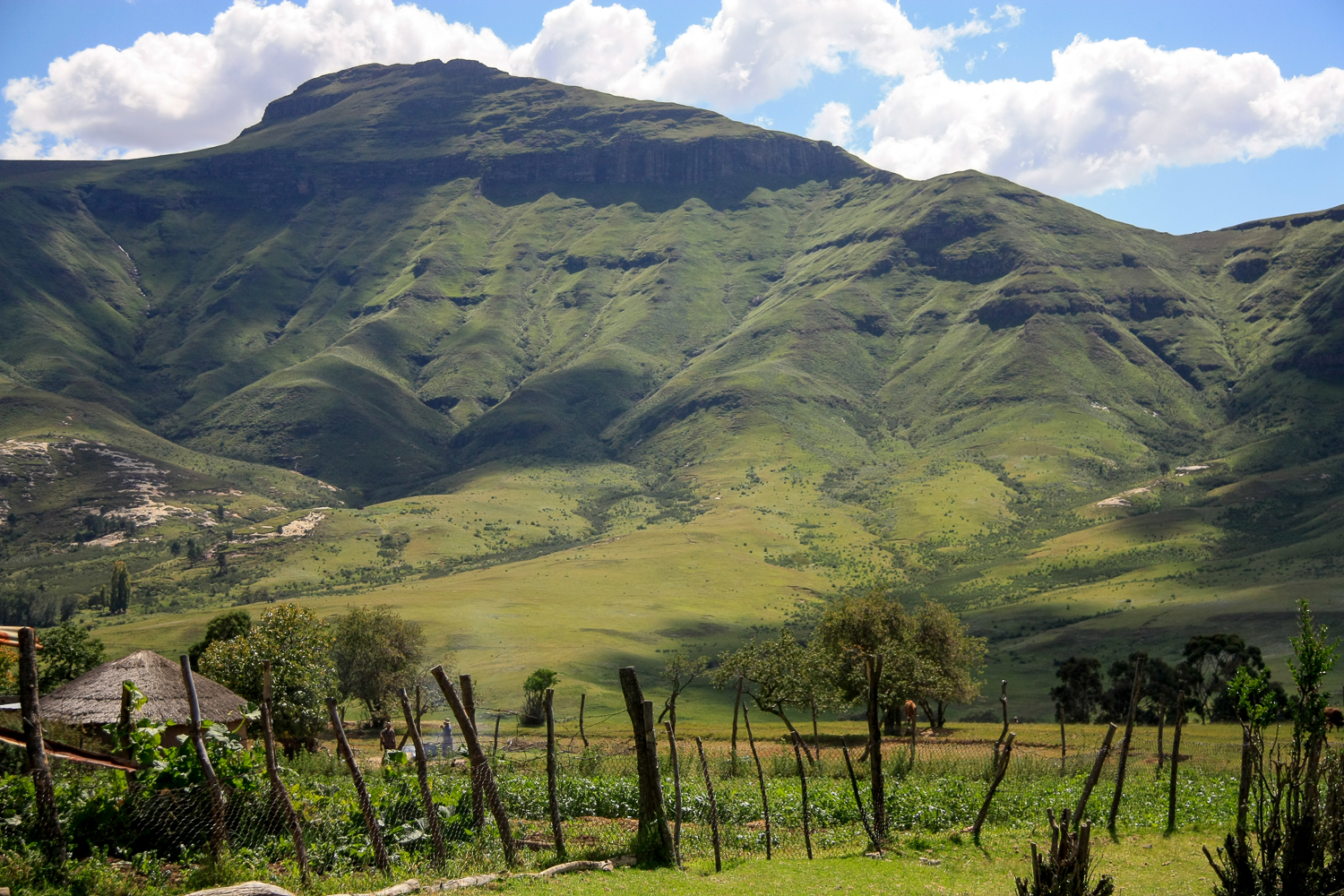 We continued with a visit to a traditional healer, who described how she found her calling by tradition (which involved dancing all night with a live rooster on her head, and it staying on), and how the process of healing a patient always involves talking to the patient’s ancestors through visions or dreams. Sicknesses are said to be inflicted by one’s deceased ancestors, in order to remind them to pay respects. Traditional medicine is then applied directly through the bloodstream by making small cuts in the skin and applying powdered herbs (hence why many Basotho have odd line-shaped scars on their foreheads or cheeks), but also works in tandem with modern medicine. Interestingly, drug addiction has no cure in traditional medicine: the healer says that’s because addiction is self-inflicted, not inflicted by ancestors. 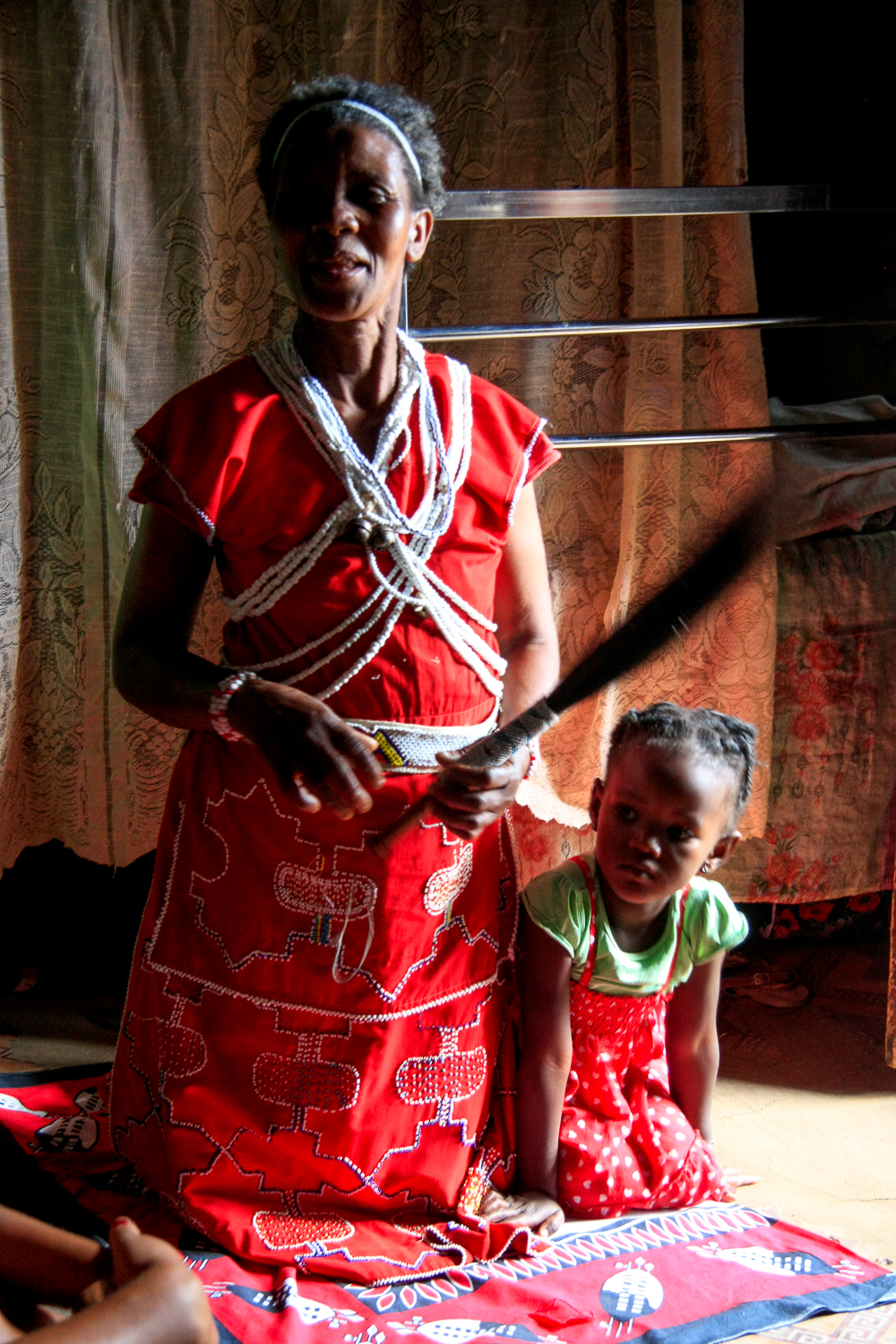 In our short visit, we got mere glimpses of village life. People on horses. People wearing traditional blankets. Farmers. A little bit of information, but not much to go by. With that small bit of knowledge in mind, along with the words for “hello” (“lumela”, pronounced du-me-la) and “thank you” (“kea leboha”), I was determined to get a fuller picture of whether the country looked entirely traditional like that or not, and what modern Lesotho looks like. 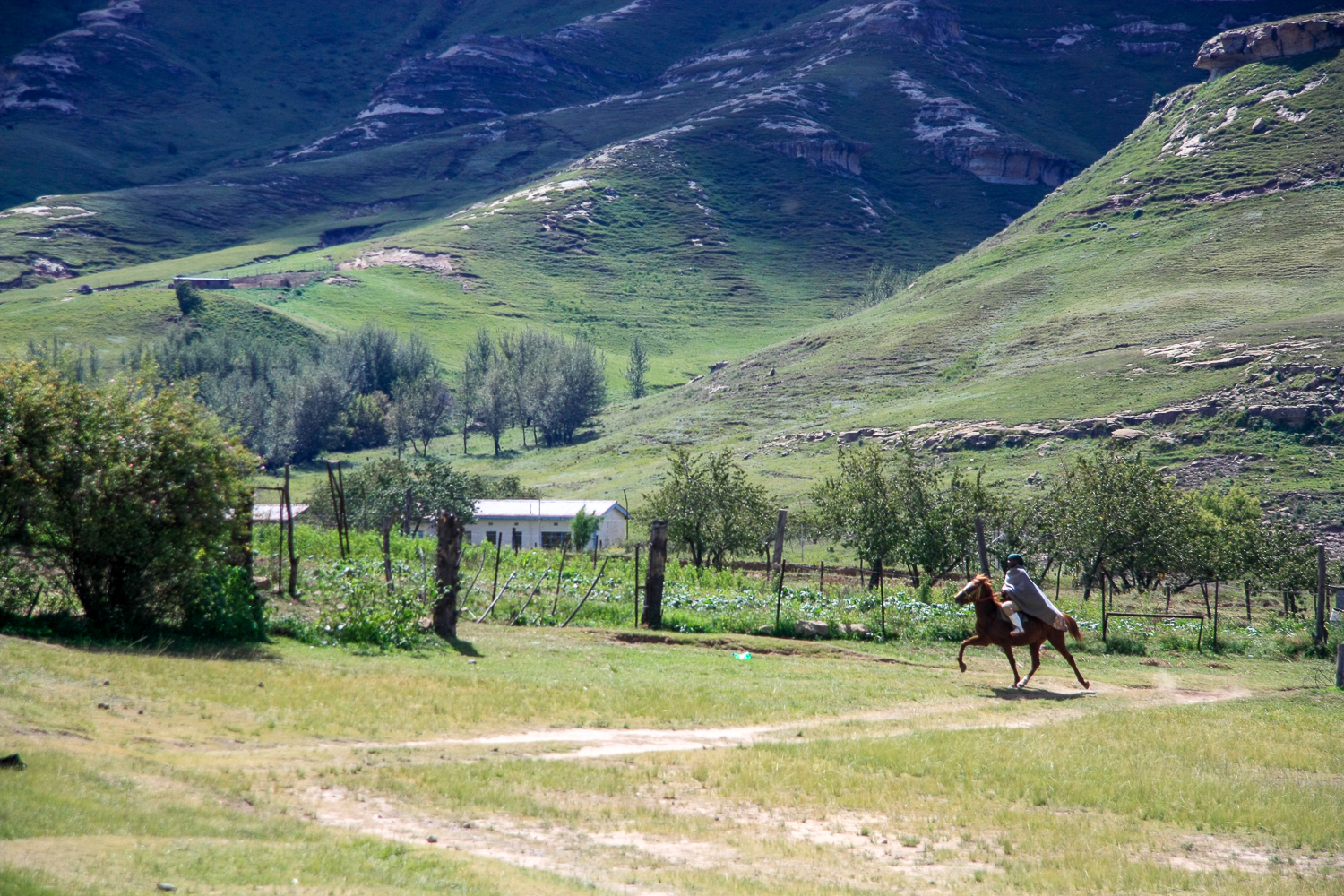 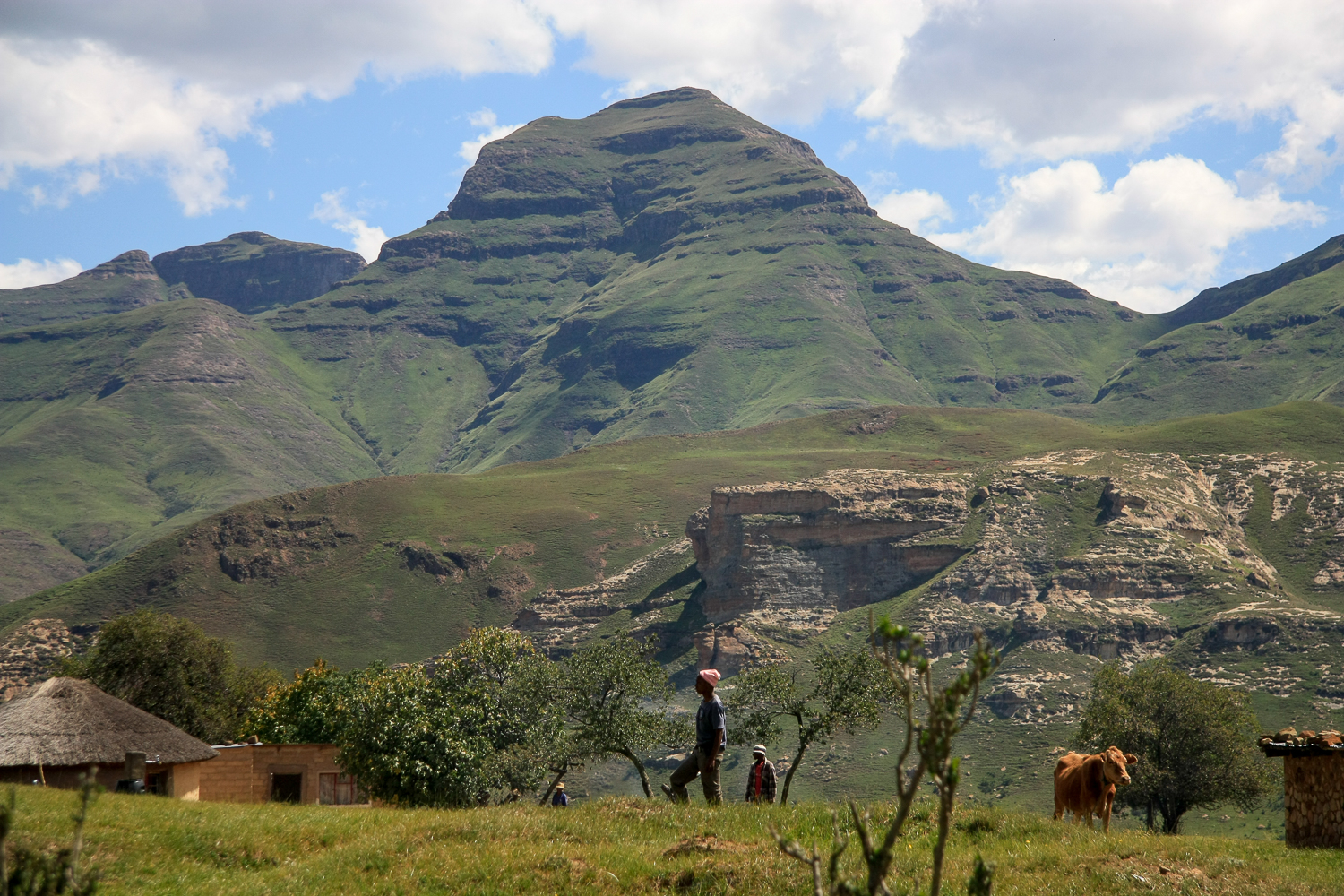 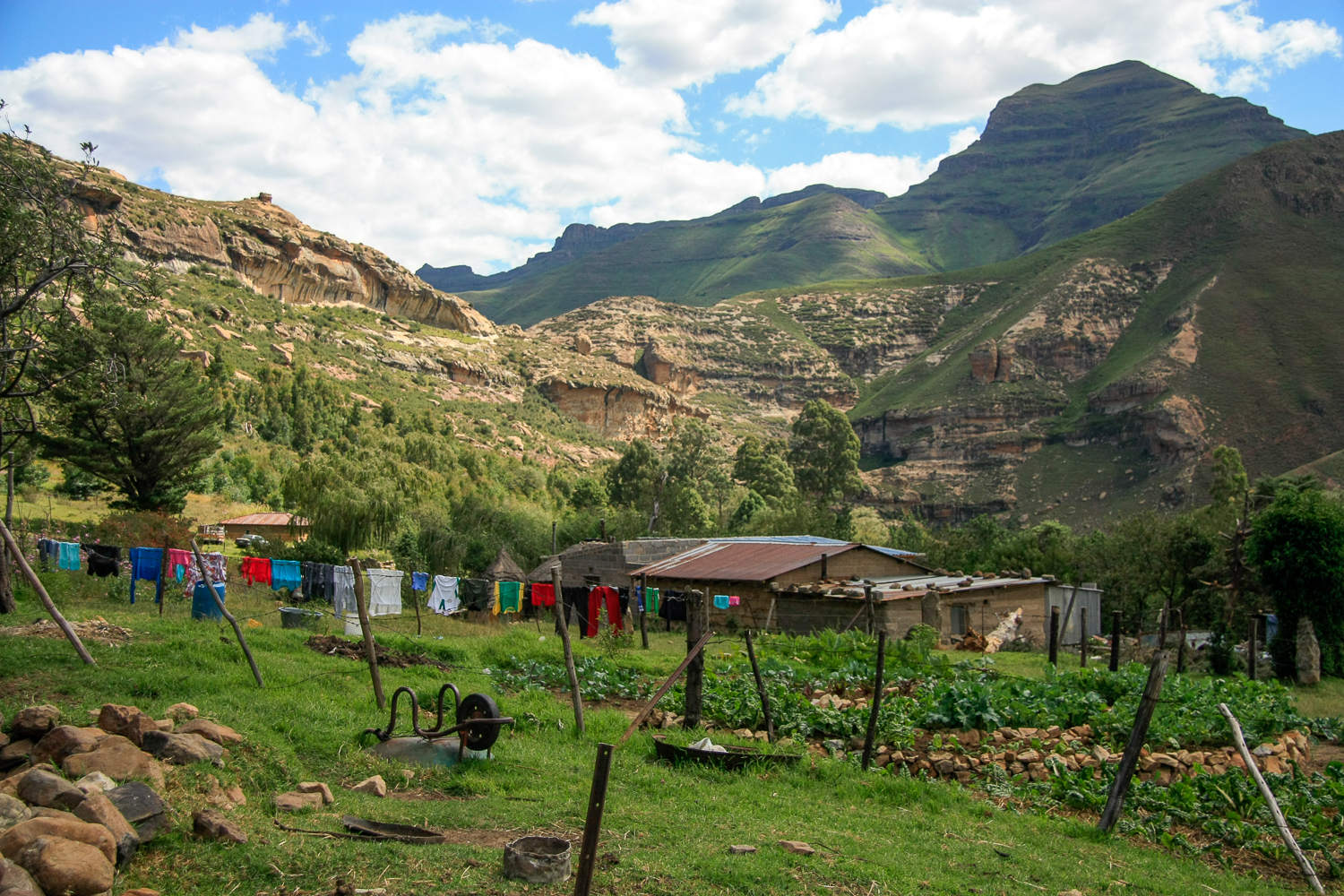 Taking a minibus taxi up the spectacularly winding and harrowing Sani Pass to enter the country again at Sani Top, I had my first lesson: life here can be seriously harsh. 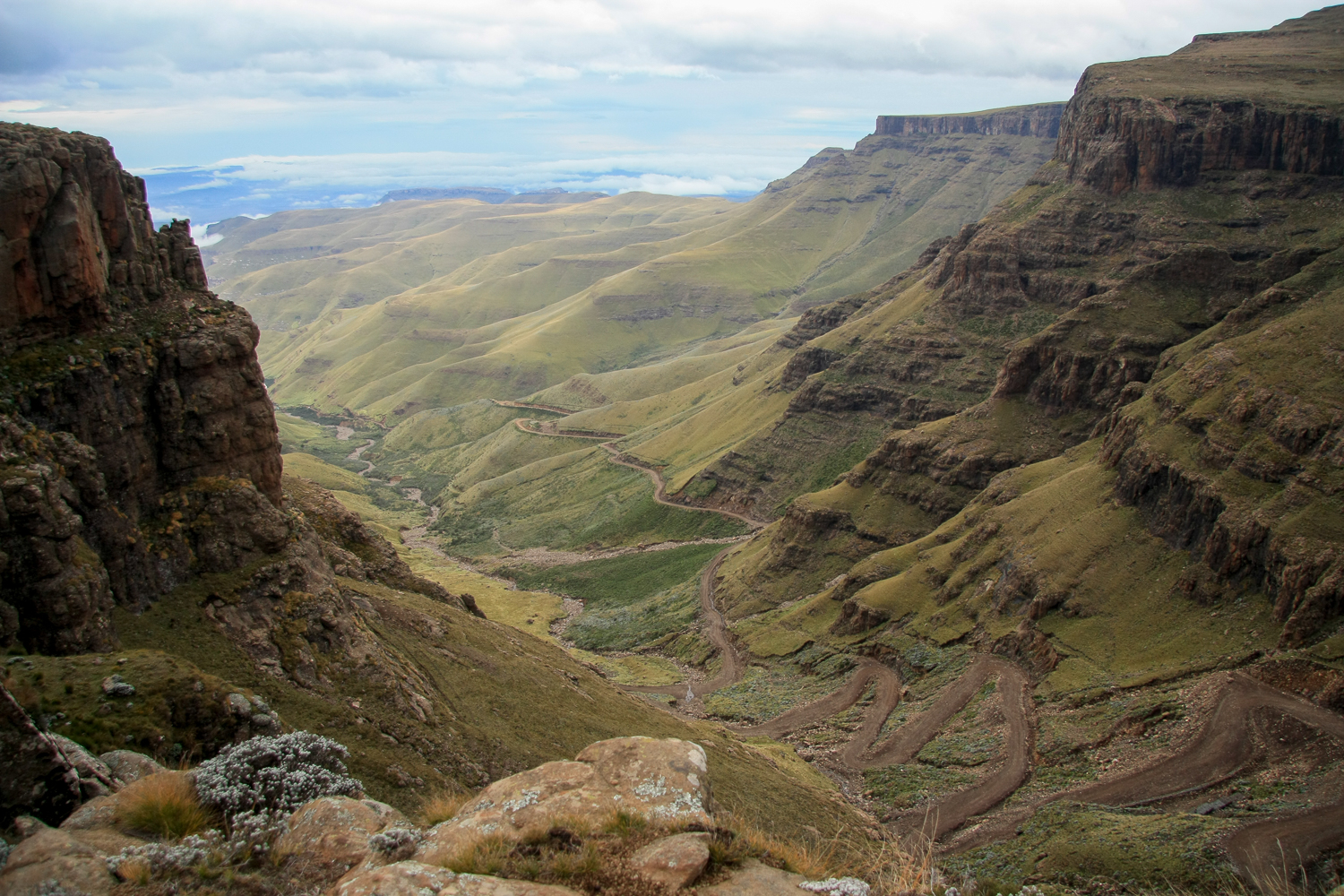 While I got a somewhat decent glimpse of the beautiful view under clouds, the weather quickly turned. I phoned for a pickup from a lodge 8 km down the road, and was told to wait an hour as he drove from the nearest large town. I waited for four, as clouds turned to heavy winds into driving rain and even a bit of wet snow — and it isn’t even winter yet. My lodging was in the middle of nowhere, with no houses or village around, and yet I passed three shepherds walking their herds in the cold weather, two together on one side of the hill, and one well below. They hollered greetings as they passed within eyesight of each other, too far to walk closer to. As for me, I had a seriously cold night: no electricity is fine, but the fire in my hut died shortly after the sunset with no wood to restock, before a storm came in, wind blowing my door open. Cooking a meal with freezing hands isn’t very easy.

The next day, I took the long way around the country, covering almost half its circumference: a 6:30 am ride to Mokhotlong, a minibus to Butha-Buthe (the second-largest city), another to Maputsoe, and another to Maseru, for a total of 9 hours of winding roads. Though grueling and getting seriously soaked by the weather while hunting for connecting minibuses in the process, it was a great way to see the country, both urban and rural, and it also happens to be the route for the annual Roof of Africa motorcycle rally (so named after the country’s altitude, though I recall it’s also the nickname for Ethiopia’s Simien Mountains). Along the way, passengers would open a window and holler out to a friend in a field, greeting them in passing even though they boarded and disembarked nowhere near. Some would disembark in the middle of nowhere, with no paths or civilisation in sight. Others hailed the bus from far away, just close enough to catch the driver’s attention: one woman was crossing a river on a horse, several hundred metres down a hill, and we stopped to wait for her. 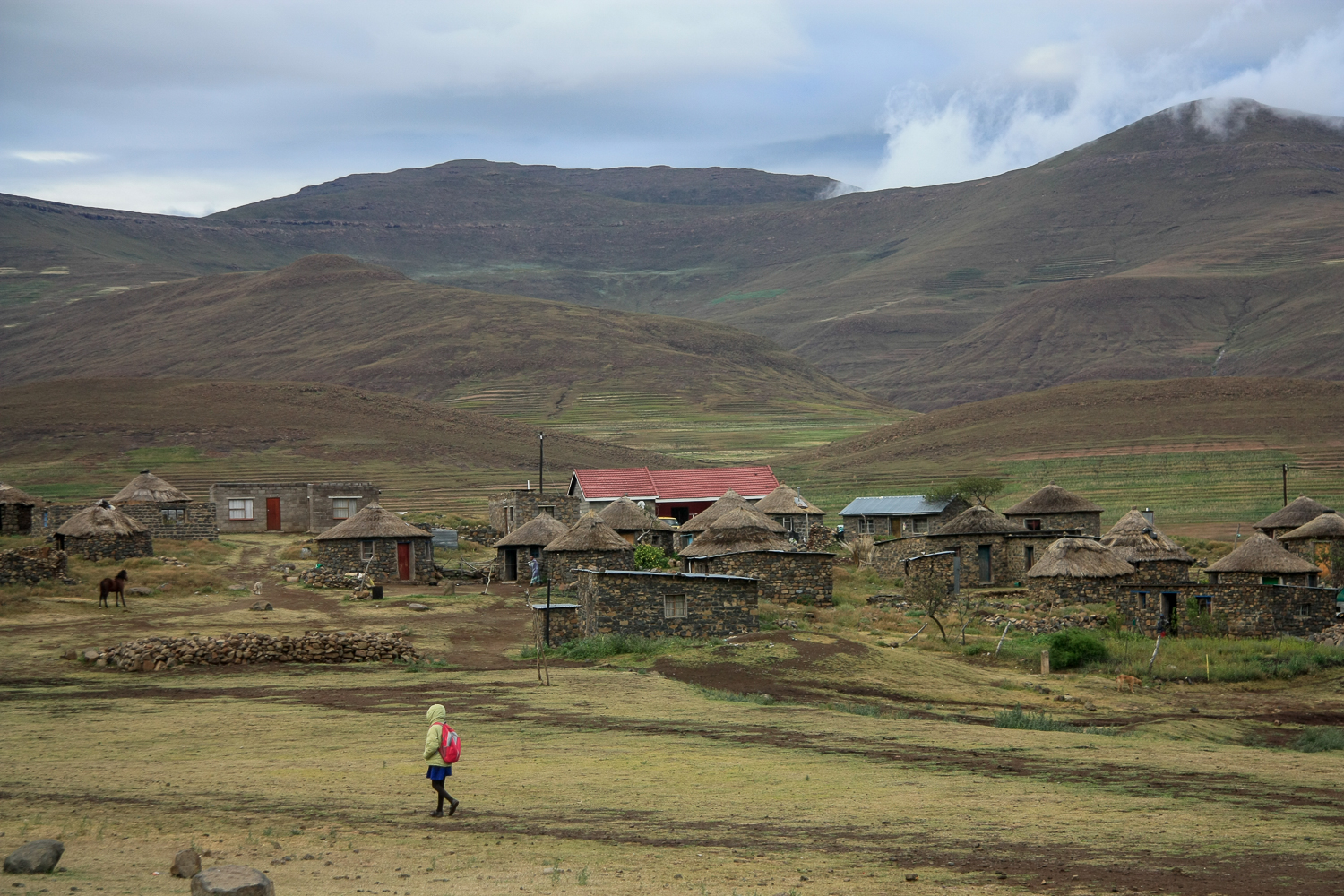 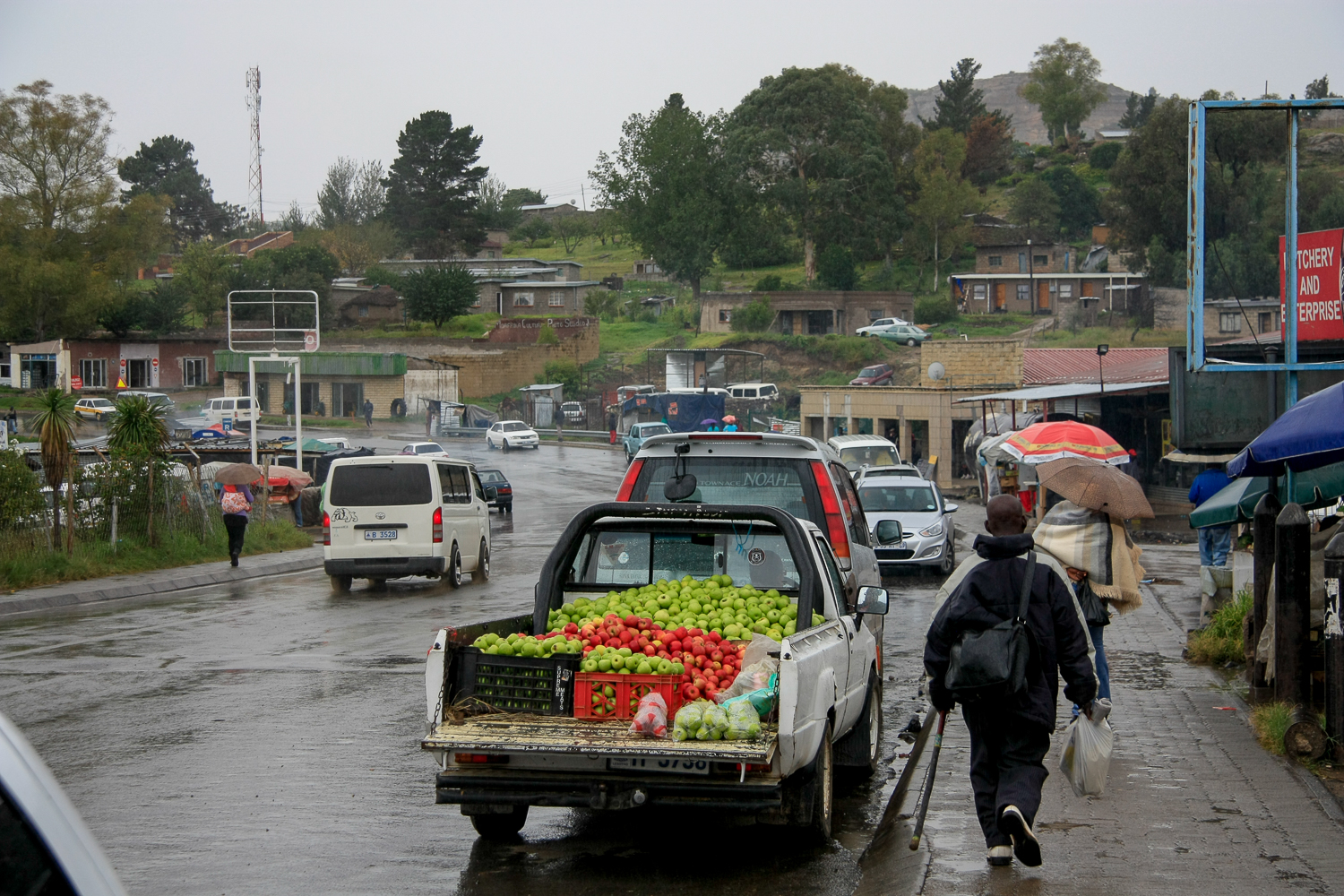 Lesotho is very poor, by statistic, but the depth of its poverty seems masked by the small wealth gap (in contrast to South Africa) and general contentment with traditional lives. Even in built-up urban areas like Maseru, much of it is like a South African township, minus the safety issues. People seem not too bothered by the typical trappings of modern life: this is a country where pretty much everyone (well, outside of Maseru) owns or has access to a horse, the only means of rapid transport between villages. Outside of the cities, people live remotely, in rondavel huts spread far away from each other, fenceless and spacious enough to give their animals ample grazing room. Yet there is a serious unemployment problem: many Basotho men went off to work in South Africa, and women took over the households. Now, with employment drying up in South Africa, these men are returning jobless. Some are too educated to go back to the shepherd life. 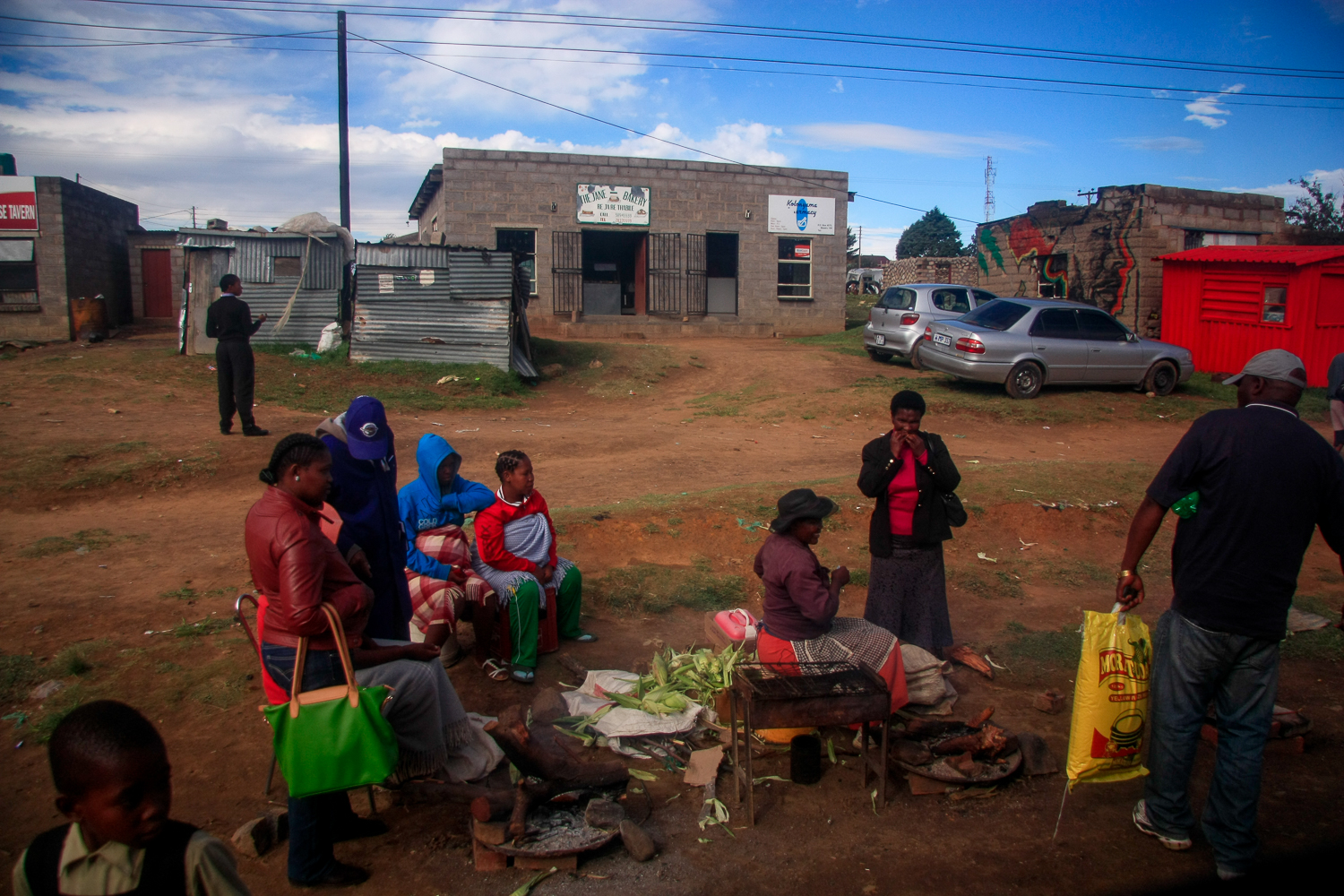 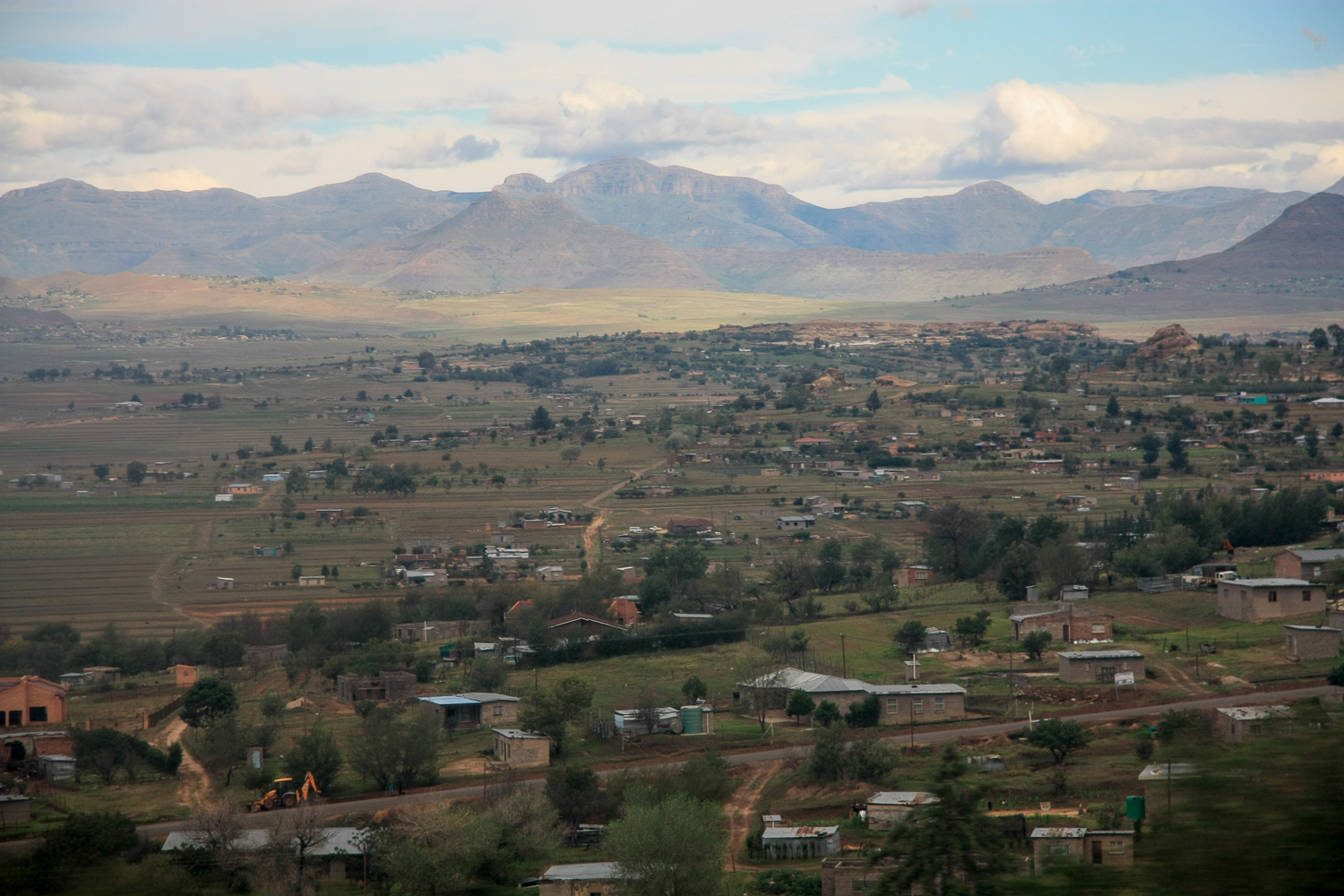 But many do remain shepherds. There’s something I like to call the men’s “Basotho suit”, or the three B’s: balaclava, blanket, and boots. (Add on a few stud earrings, a short staff, and the occasional Basotho hat.) Given how cold and wet it is in Lesotho, it’s not much of a surprise, and even the women seem a bit exasperated by the fact that so many men look like bank robbers when they walk into their shops. But the Basotho hat and blanket both carry significance: the hat, with its weird little top decoration, is featured on the flag. It’s more of a summer thing, so I didn’t see it too much. But the blanket is ubiquitous, no matter if the day is hot or cold: beginning as a fashion statement Moshoeshoe made when gifted a wool blanket by Queen Victoria, the locals began to emulate the way he wore it. There are several specific patterns, each with their own meanings, but I sadly never got to really delve into them. Men and children wear it full-body, either bundled up completely or flowing behind them like a cape, and women (specifically mothers) wear it below the waist. 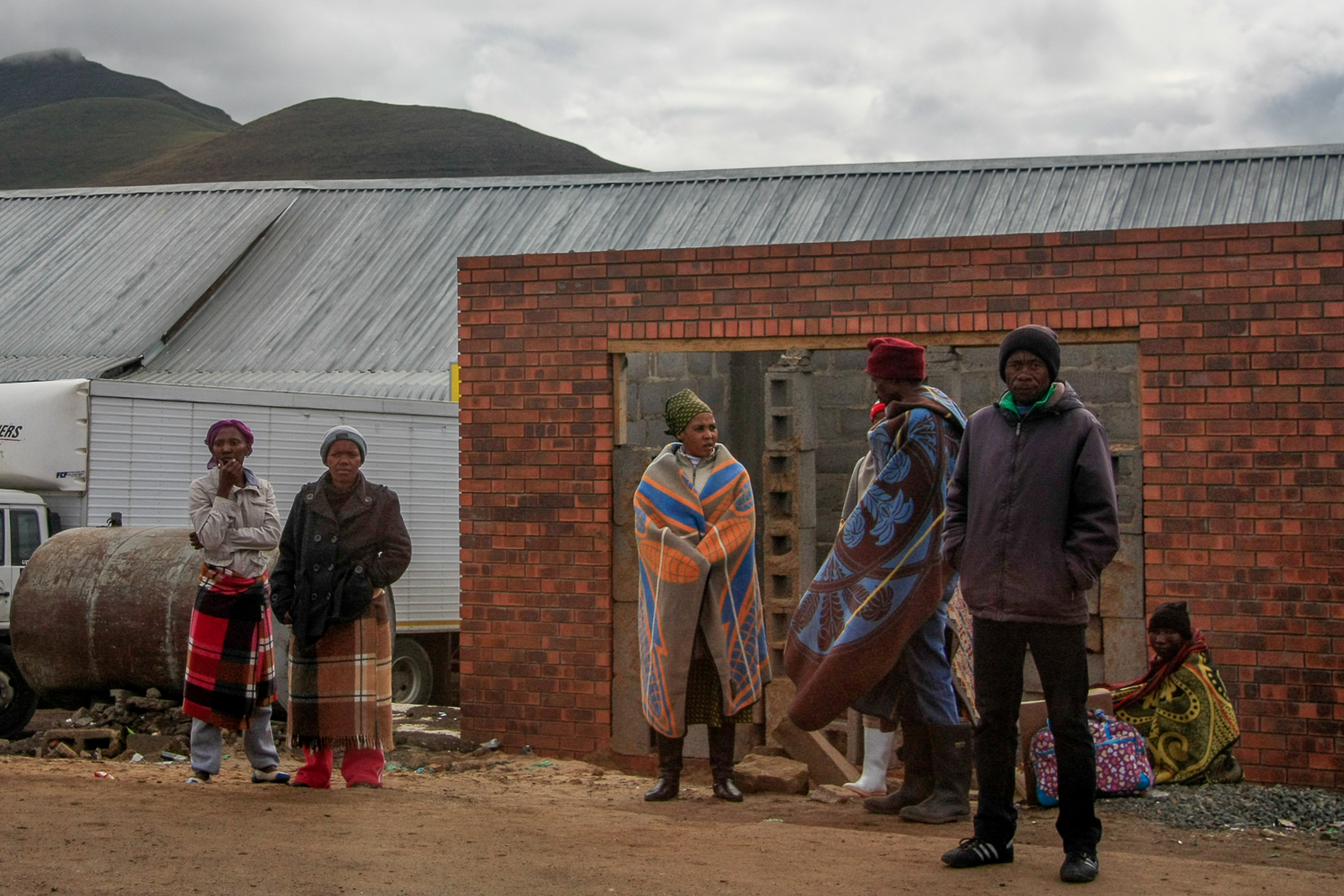 Passing through each town, besides seeing the odd sight of blanket-clad people buying groceries on horseback, I noticed that every one seemed to have a Chinese supermarket. Indeed, I walked into one, and was as surprised to see a Chinese woman behind the counter as she was to see me. She turned her attention back to a local customer, and spoke fluent Sesotho, tongue clicks and all! Sure, with a Mandarin accent, but still. And all along the beautiful, new, Chinese-paved roads, Chinese drivers and construction workers, occasionally carrying locals in their trucks. In the cities, Chinese people, presumably private small business owners, drove cars around with Lesotho license plates. It explained a lot on how locals react to me: usually first talking to me in Sesotho, then switching to English after they realise I don’t understand. I’m never asked “Where are you from?”, it’s always “Where are you working here?” 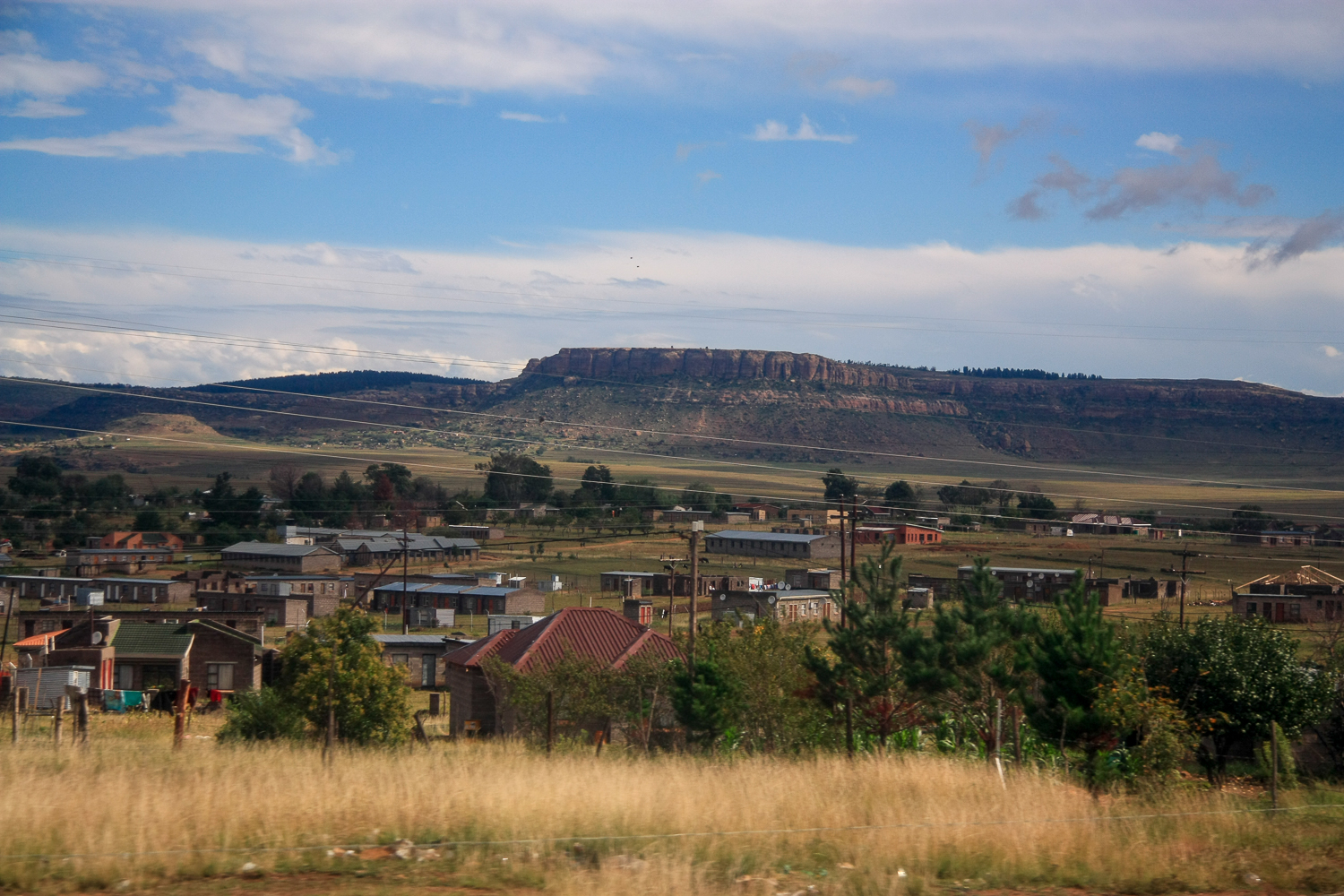 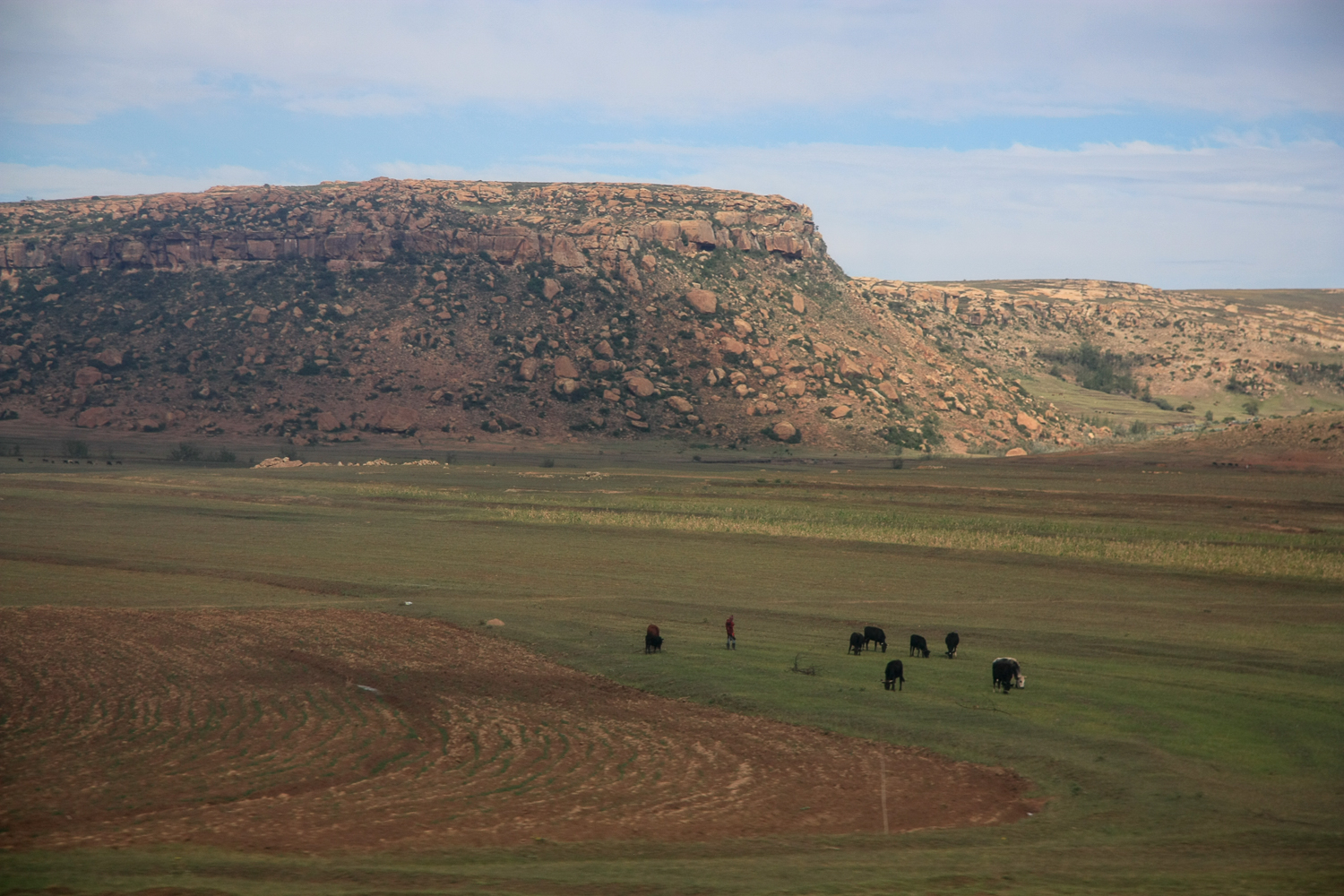 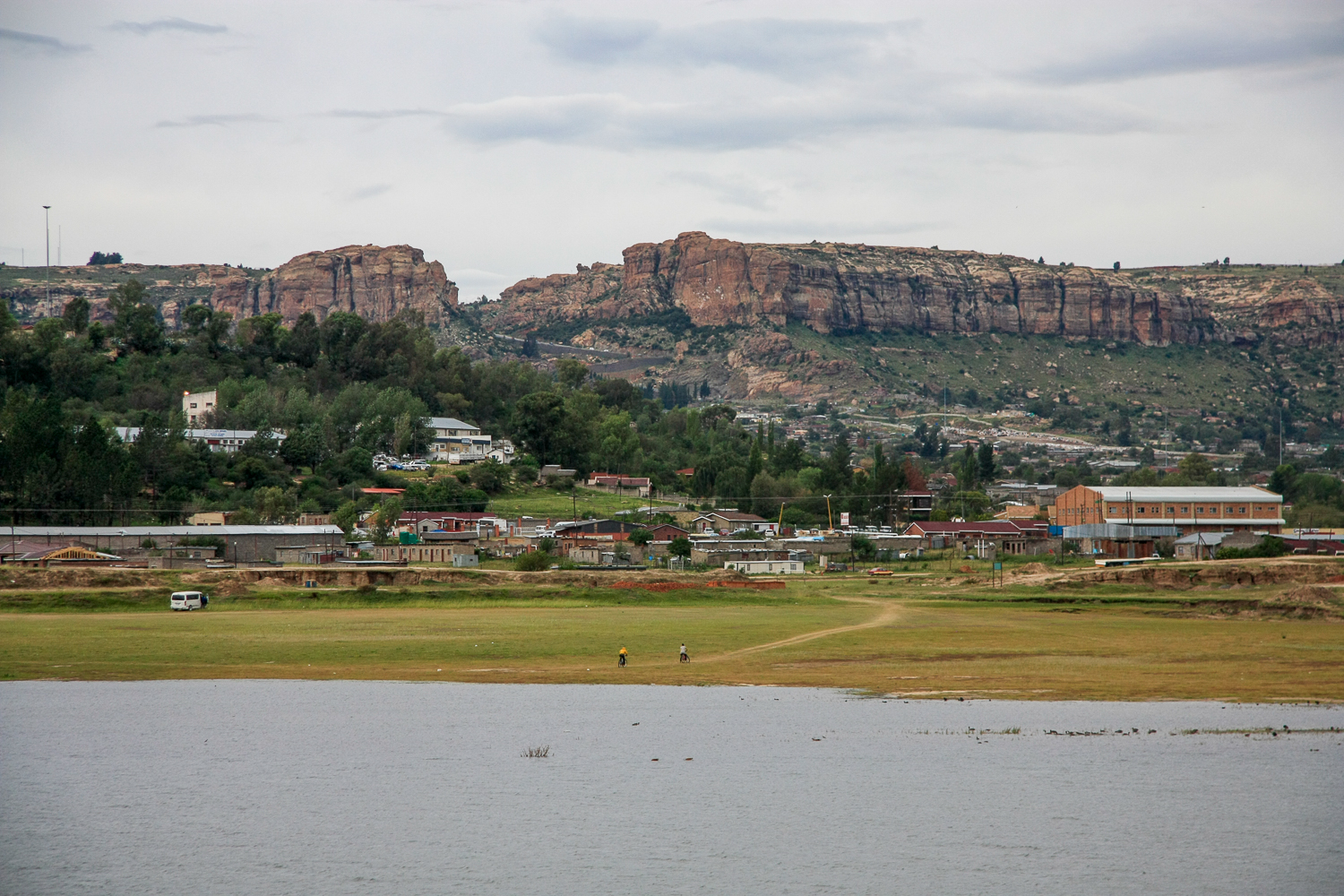 The landscape changed from barren hills to lush mountains, to meadows of purple cosmos flowers, and finally to sandstone as I made my way to Maseru, the capital and largest city but without much of interest. I still hadn’t even gotten to Semonkong yet, in the centre of the country: one more day of transport to go!