I had no idea.

Throwing caution to the wind, I booked a four day/three night trekking tour to the Simien Mountains, since everyone was doing it. Didn’t even know it was a UNESCO World Heritage Site. Never even saw a picture of it. And on the first day of our hike, we hardly saw any of it underneath the clouds or the heavy rain that came through the evening. The temperature dropped to near-freezing and I froze too, wondering what the heck I got myself into.

Then as Florence and Rosie (my fellow trekkers) and I were led by our guide Dawit the next morning to a little viewpoint a few hundred metres from our lodge in Sankaber, it was all clear to me. 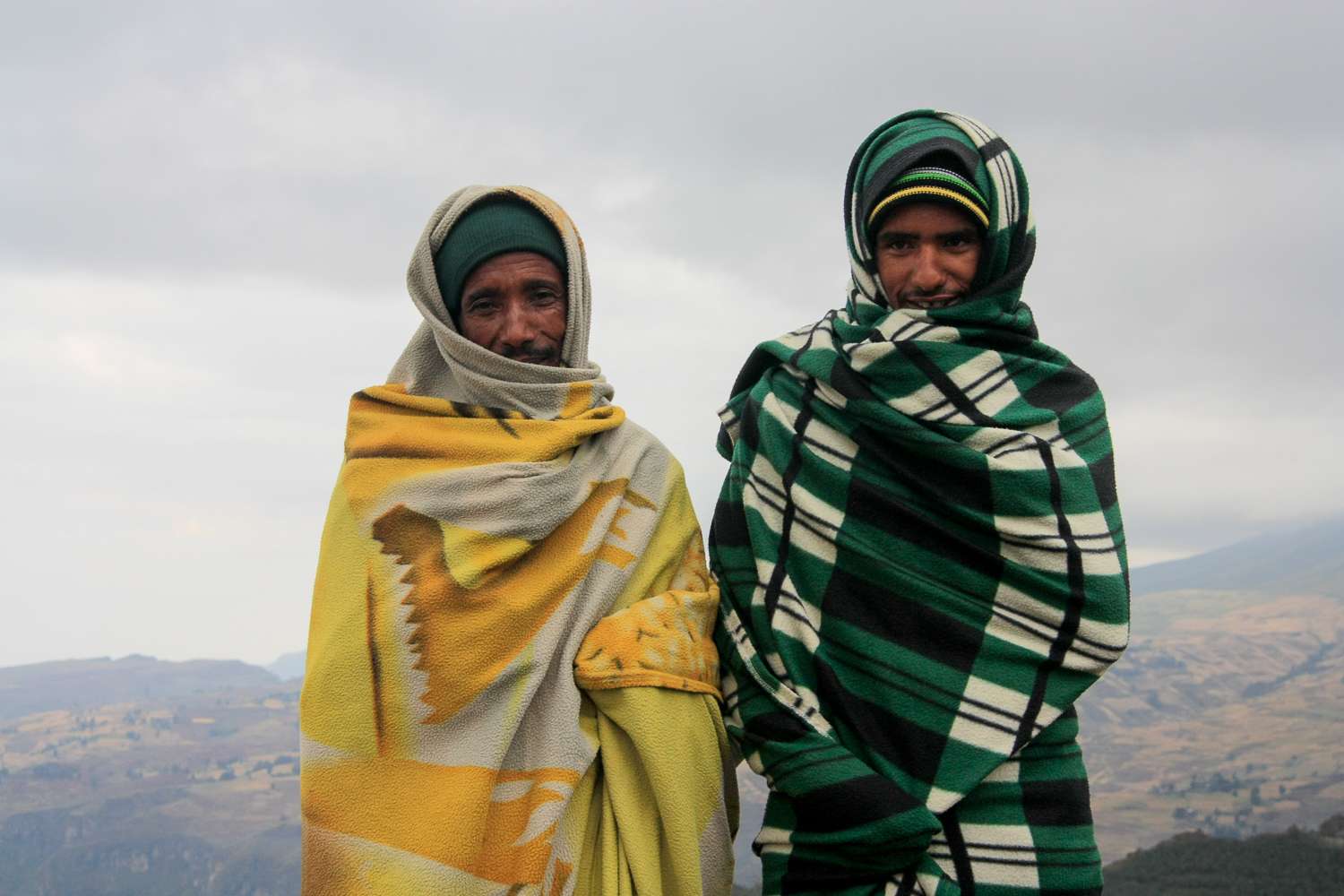 Our scout and guide, Ateno and Dawit 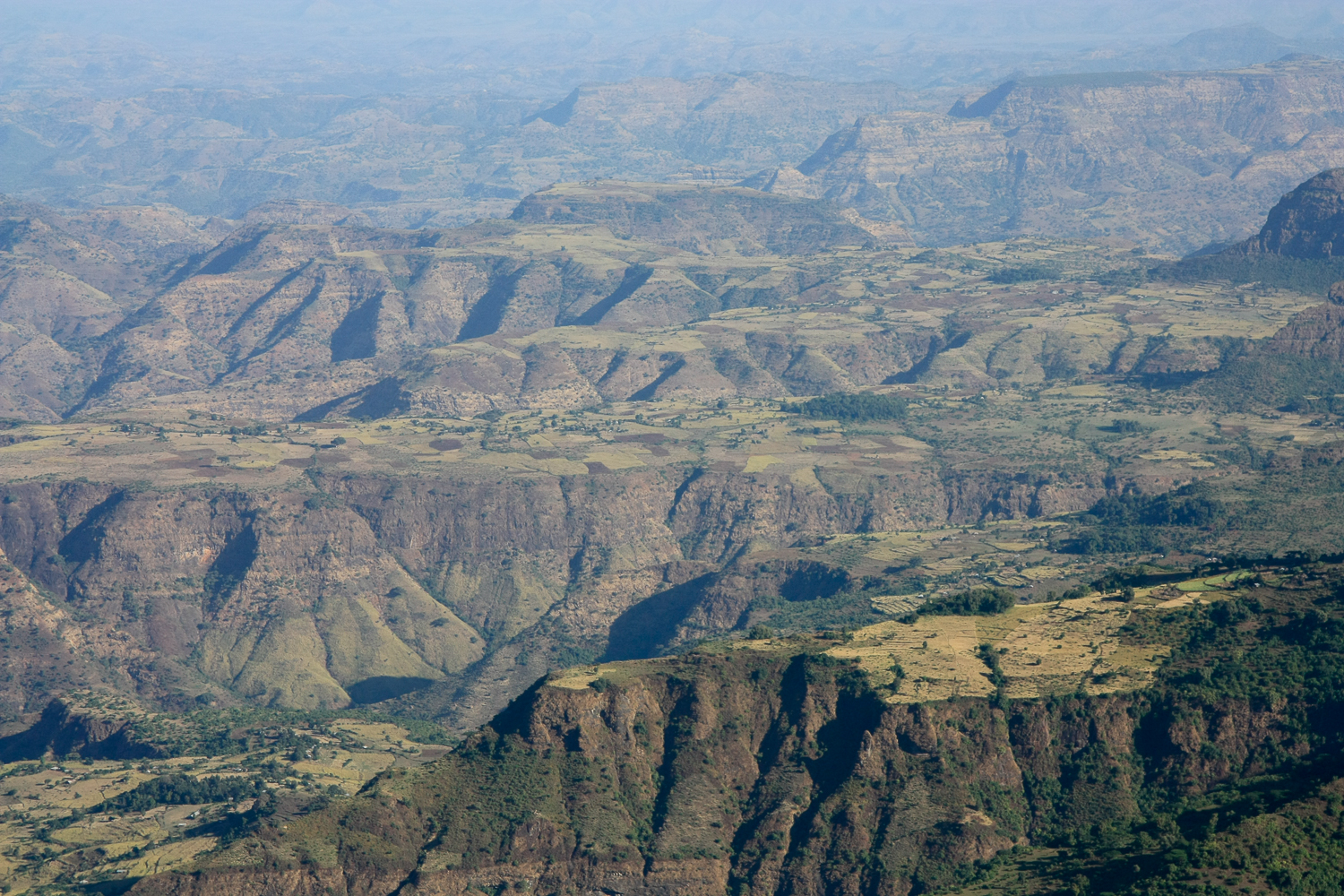 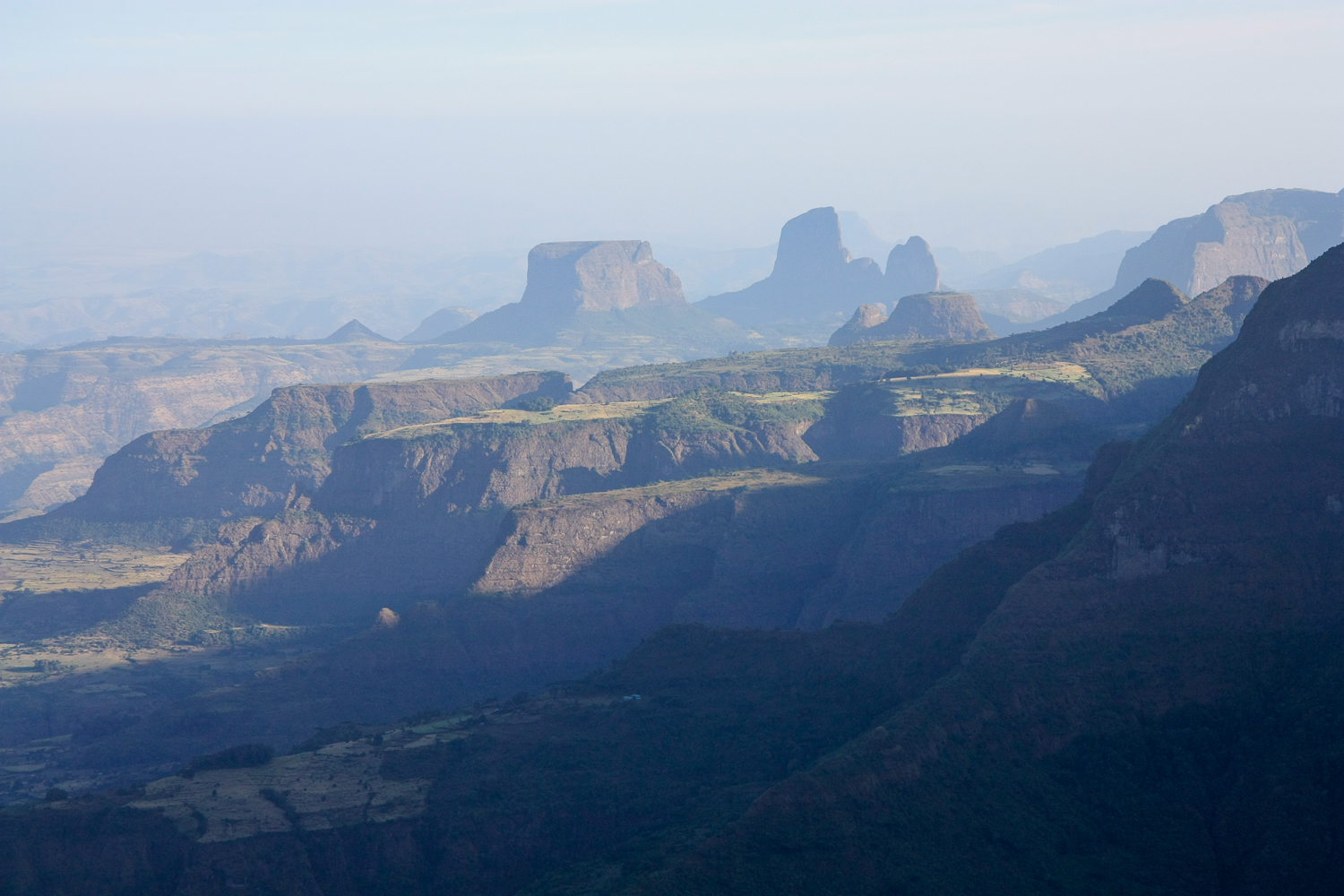 In the chasm below, a valley full of mini mountains, as if we were looking down from a plane. Jagged spires, razor-thin ridges, sheer cliff walls… most of the time we were walking along a precipice of some sort. And as we progressed over the next few days, the scenery kept changing. Fields of barley, rolling pastures, fragrant thyme, waterfalls, villages, shepherds tending their flocks, desert-like landscapes. As unreal as a fairytale, and more often than not, we were the only people around. Our goals for each day were “that peak waaaay over there”, and after reaching it, looking back at the incredible landscape and incredible distance we walked was a jolt to the senses. The shrouded mountain sunset we saw on the second night probably ranks as the best one I’ve seen in my life! 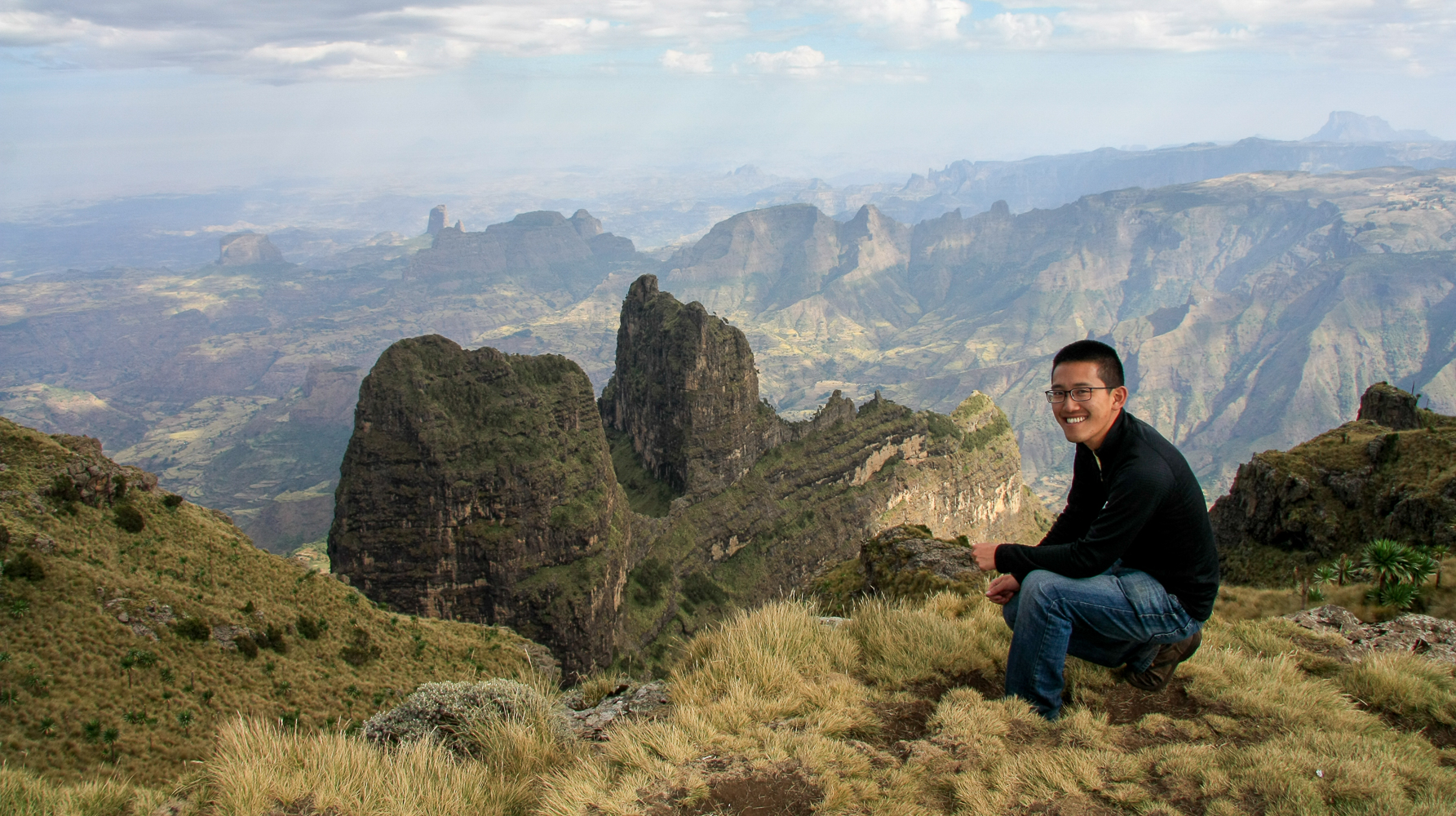 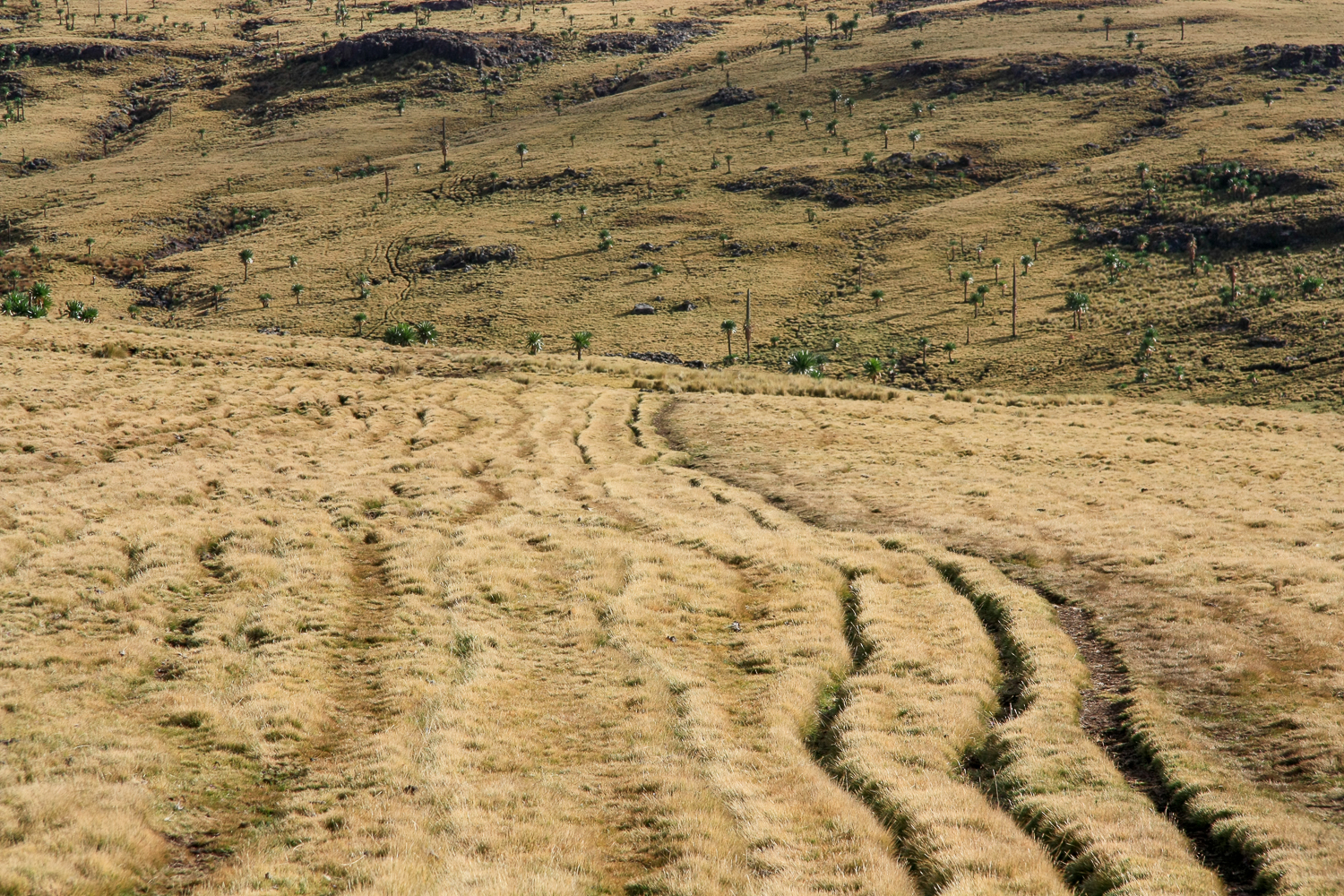 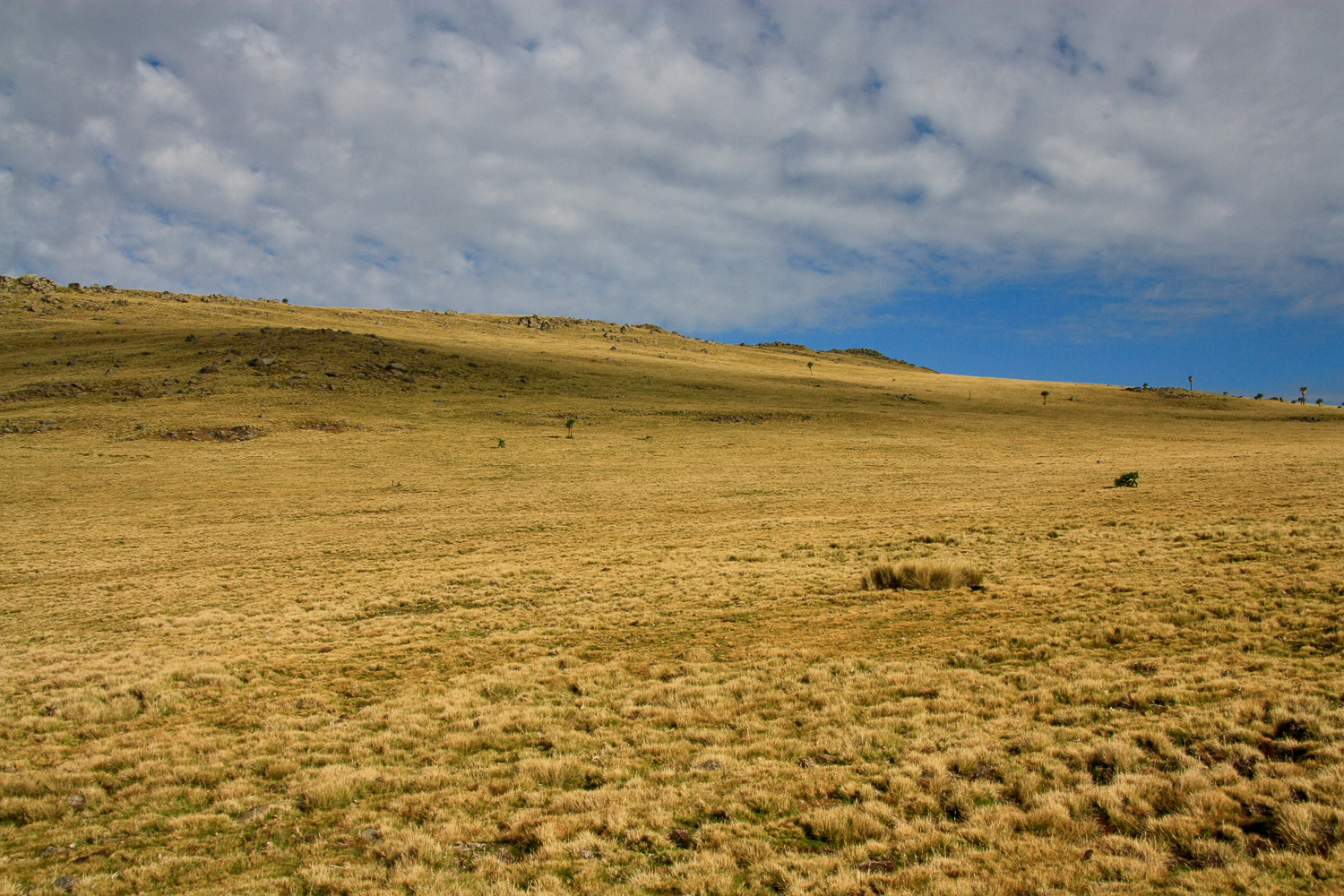 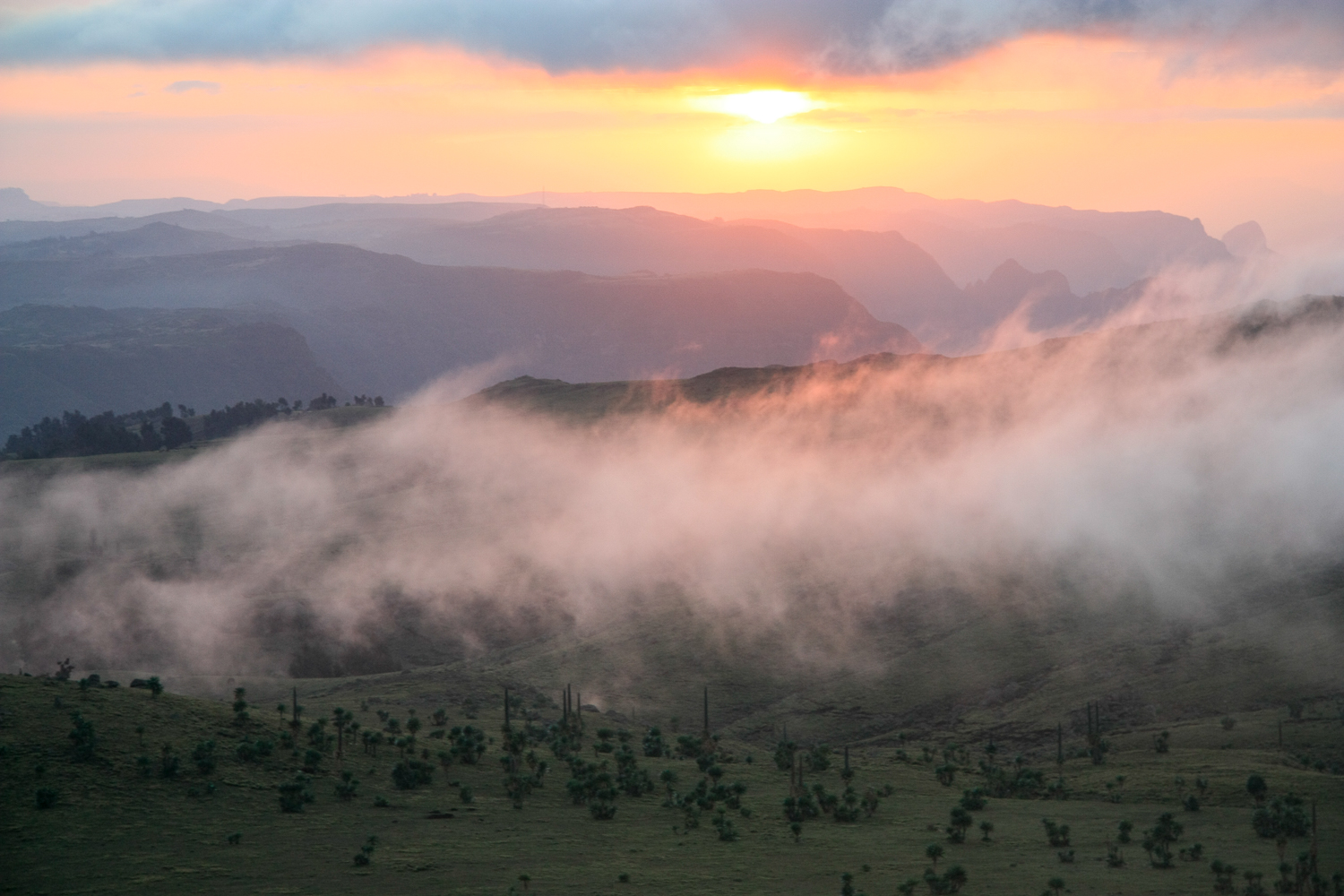 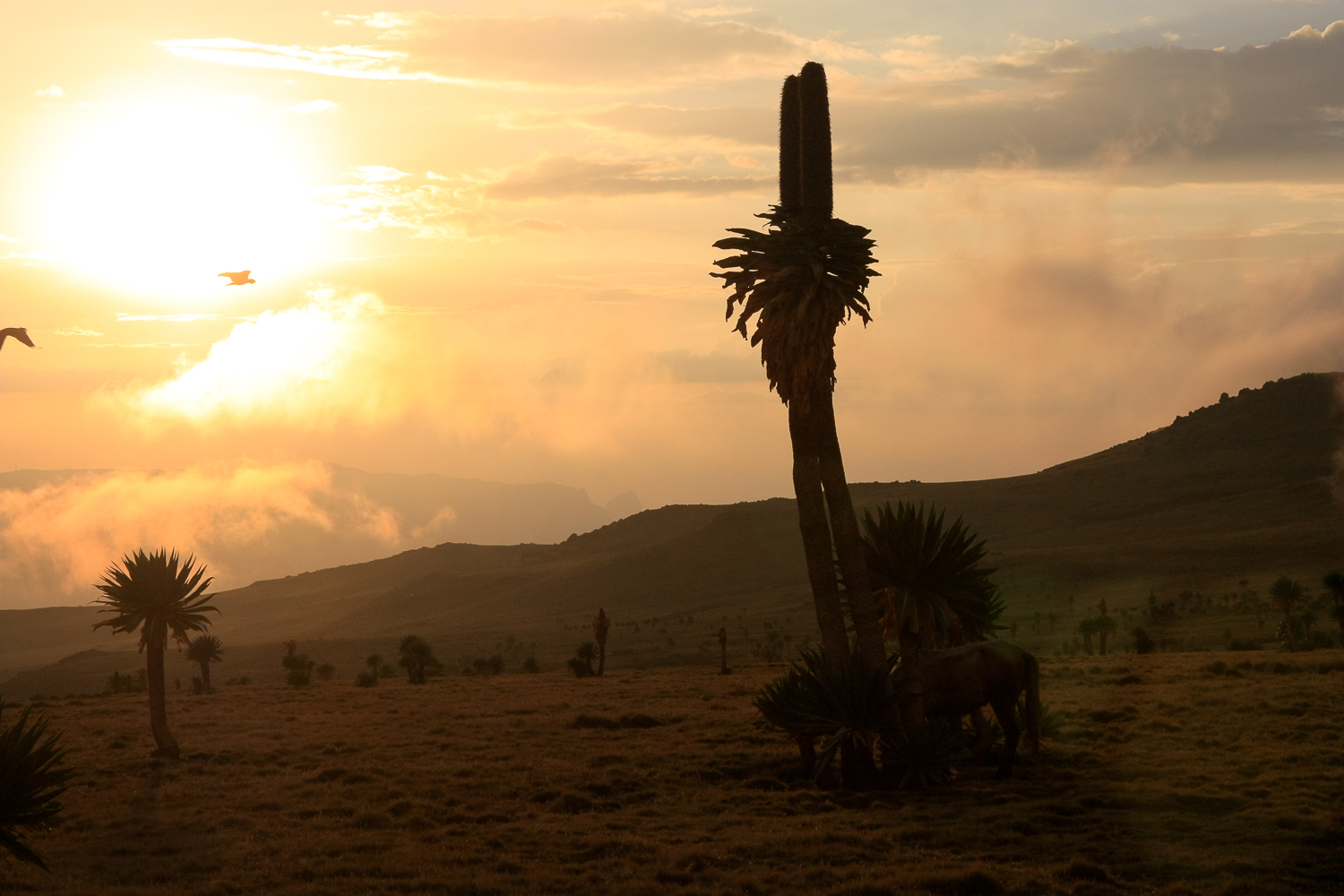 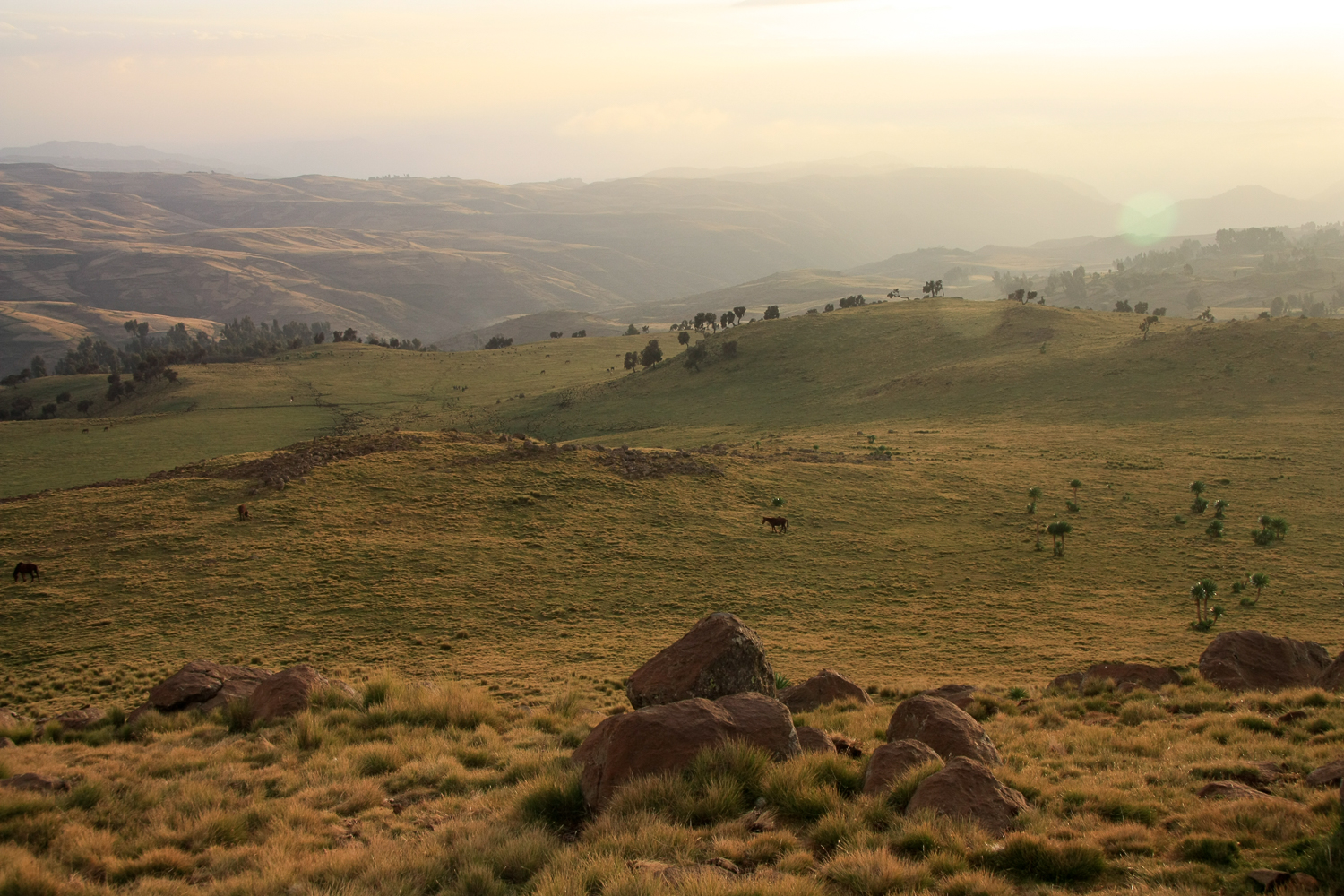 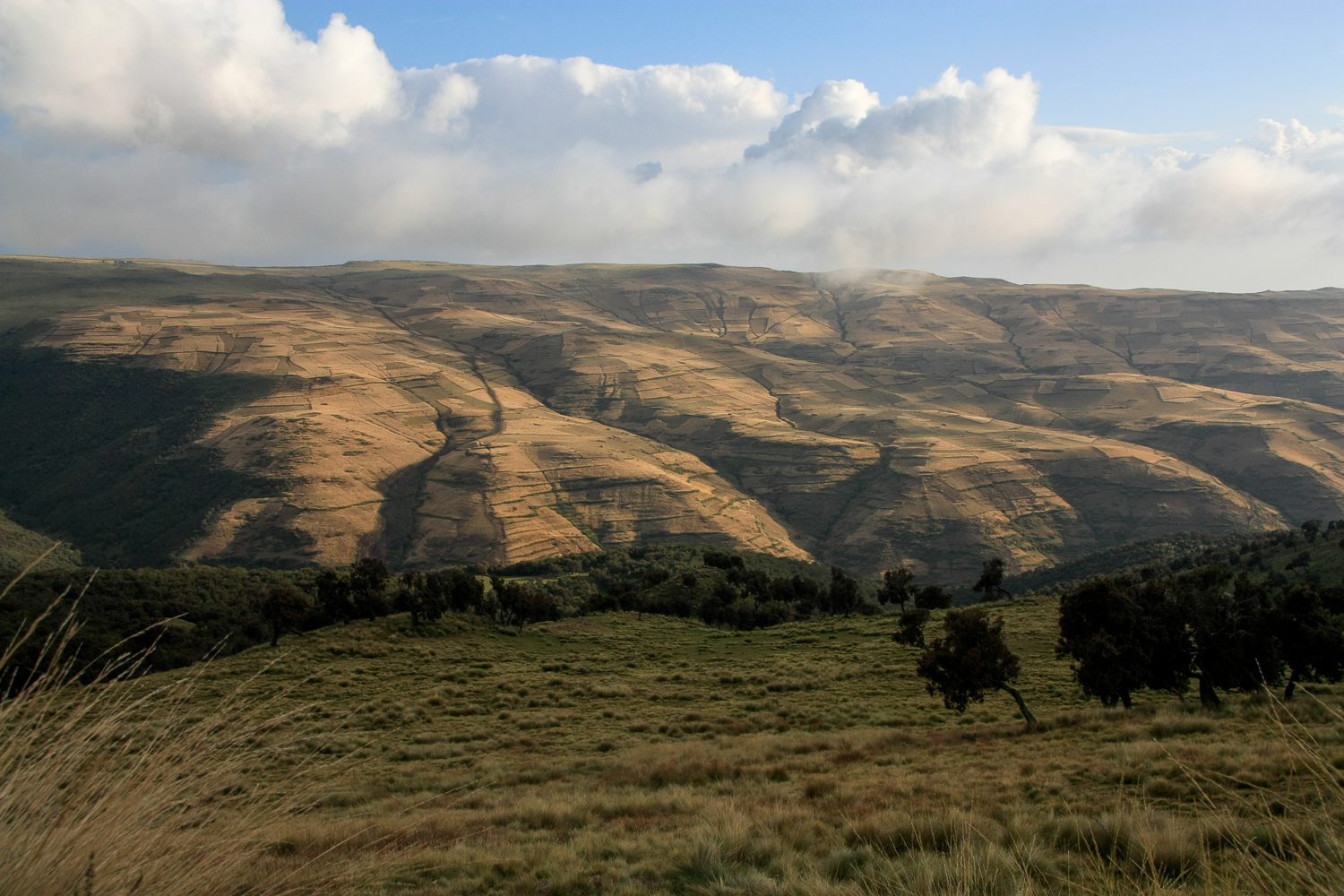 They call it the roof of Africa. Ras Dashen (a bit over 4600m and covered by clouds the entire time we were trekking) may not be the tallest mountain in Africa, but nowhere else do you get the sensation of walking on the sky. 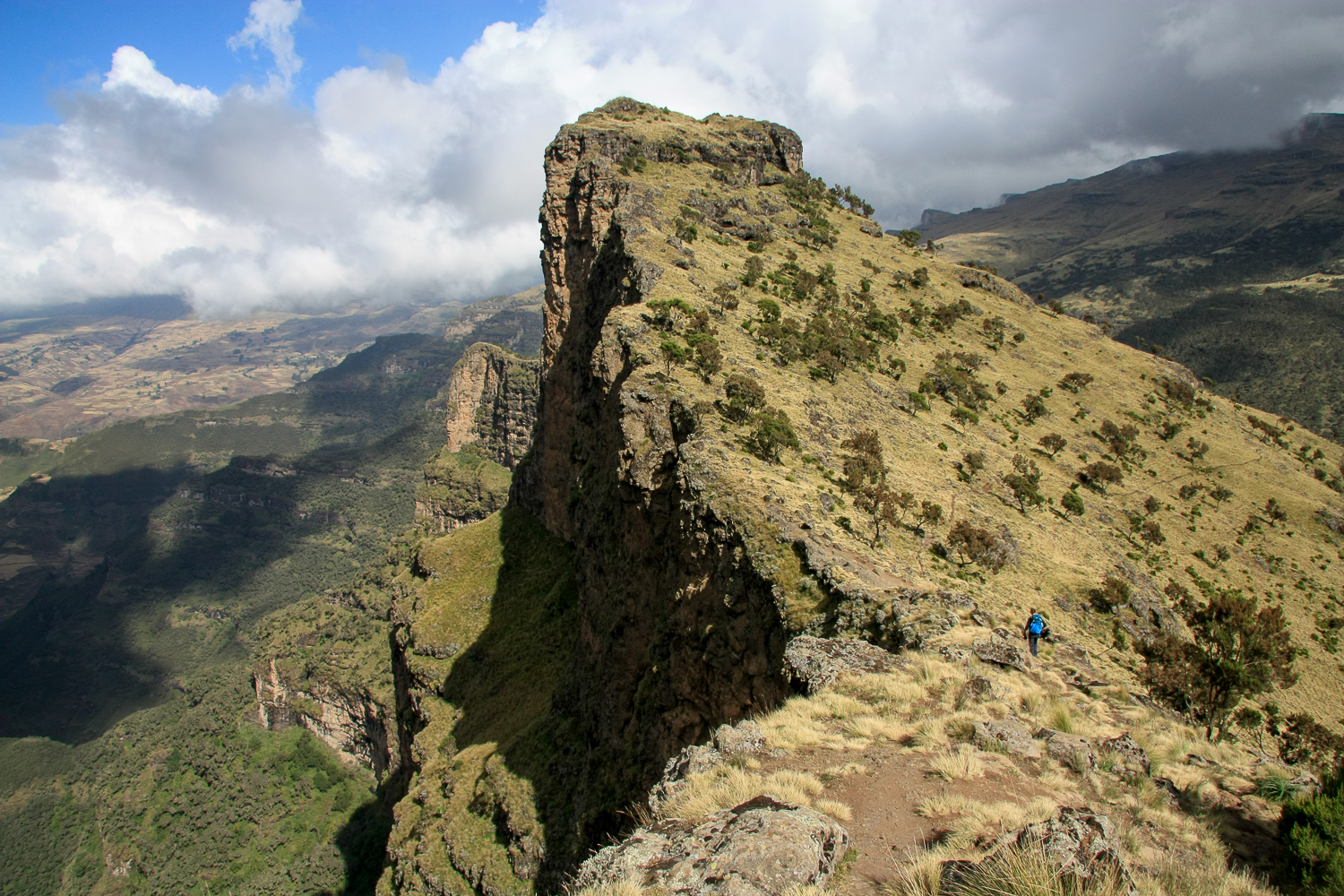 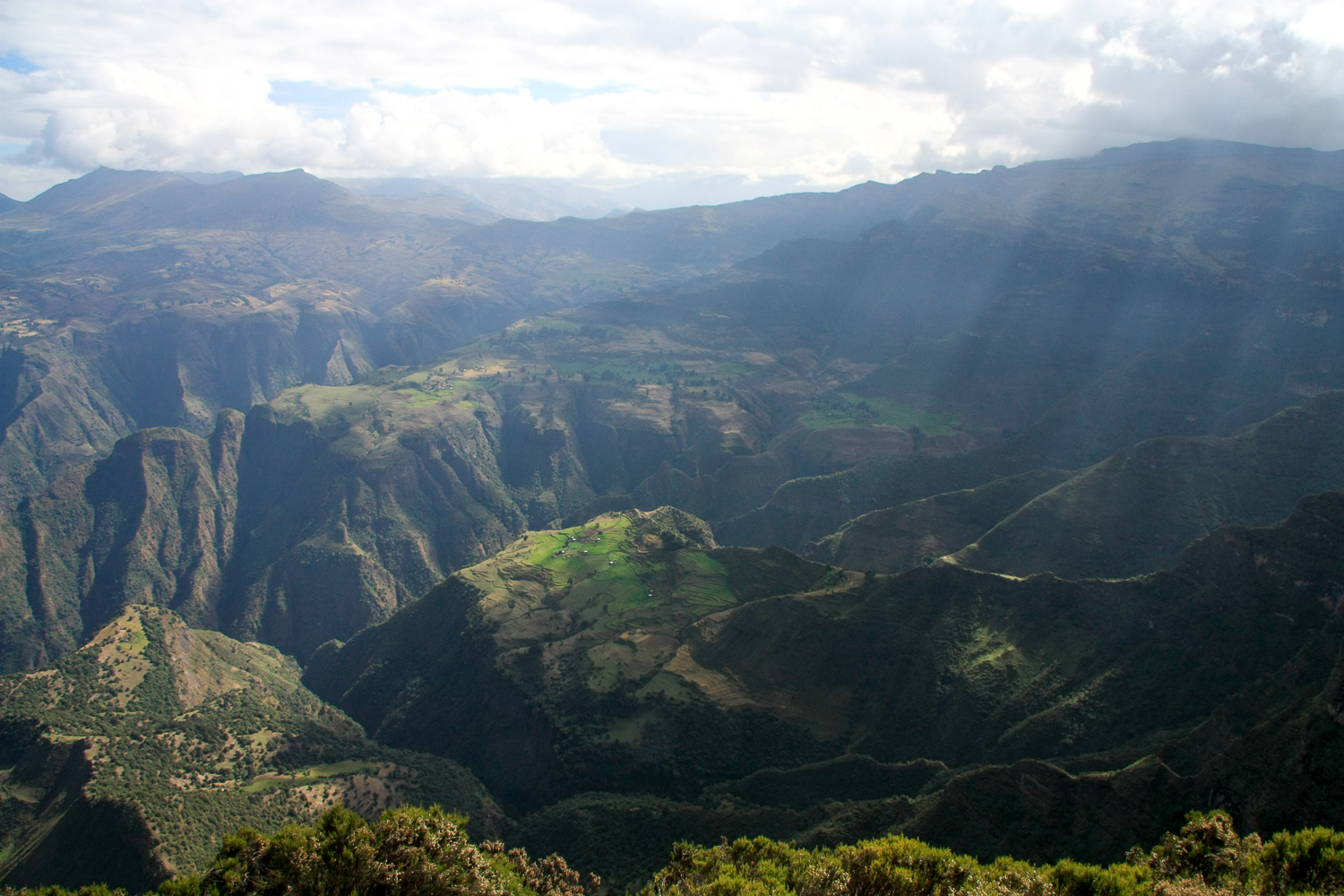 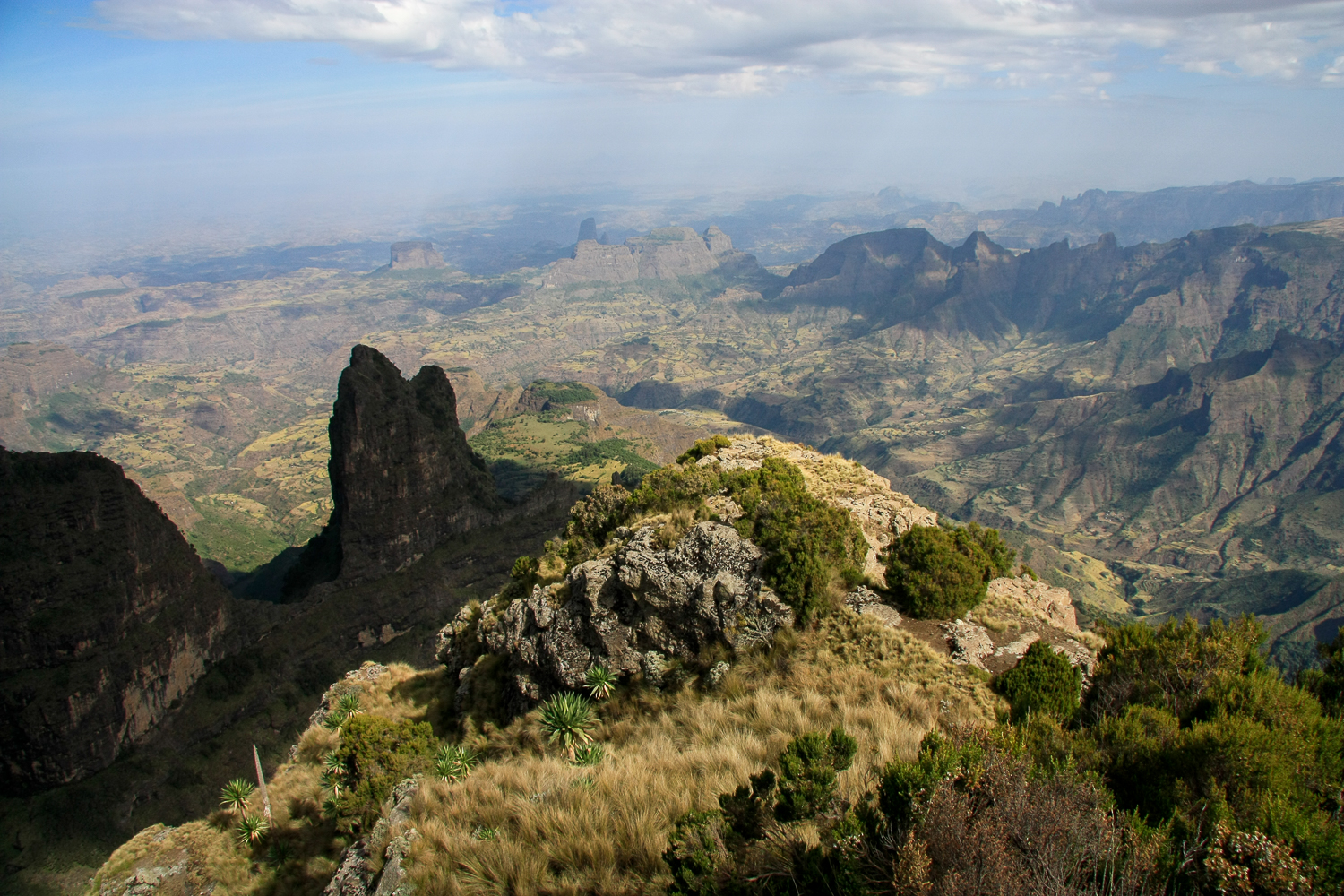 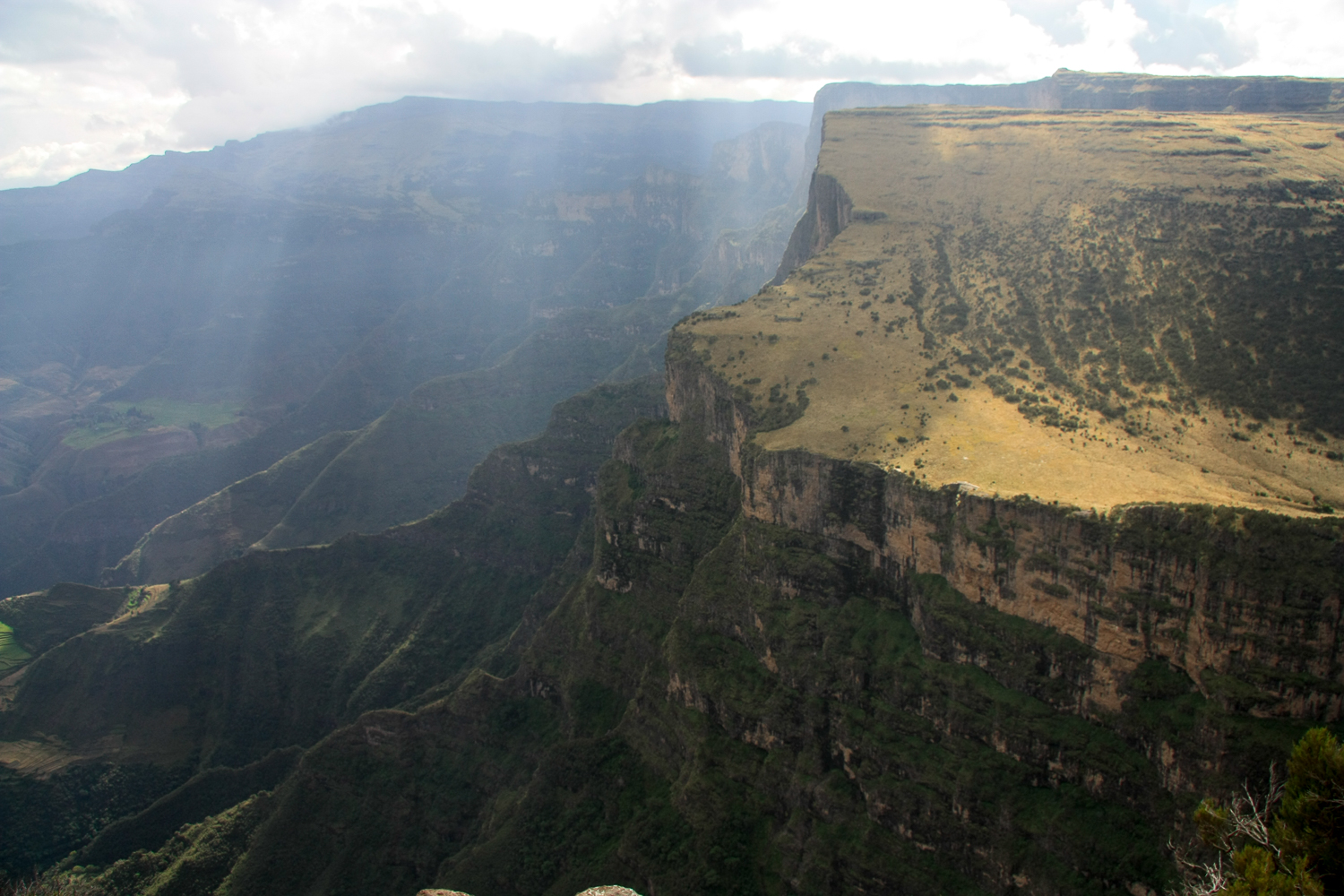 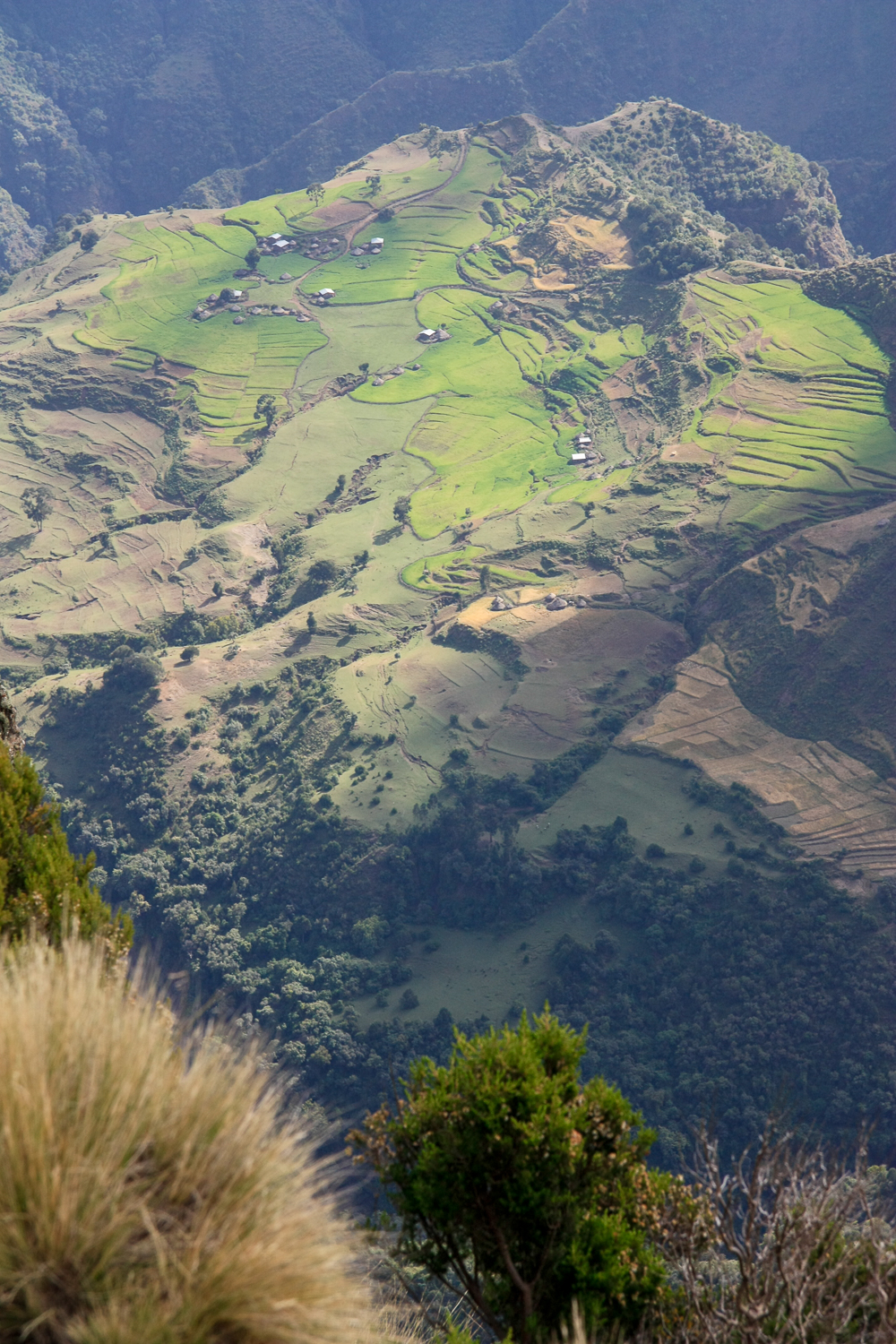 And the animals! Gelada monkeys (also known as bleeding-heart baboons) everywhere, unafraid of human presence. Dawit, a former shepherd who happens to be my age (though he isn’t sure of his own birthday), regaled his tales of chasing them away from the barley fields as a kid. (I’m pretty sure that was featured on BBC’s Planet Earth or Human Planet in an episode about living in the mountains.) Aside from livestock, birds of all sorts, bushbuck antelope, ibexes, and the critically-endangered Ethiopian wolf (all endemic to the area) made themselves quite visible to us, hanging out around the lodges. (Put it this way. There are 500 Ethiopian wolves left in the world. We saw 5 of them. 1% of the whole population.) 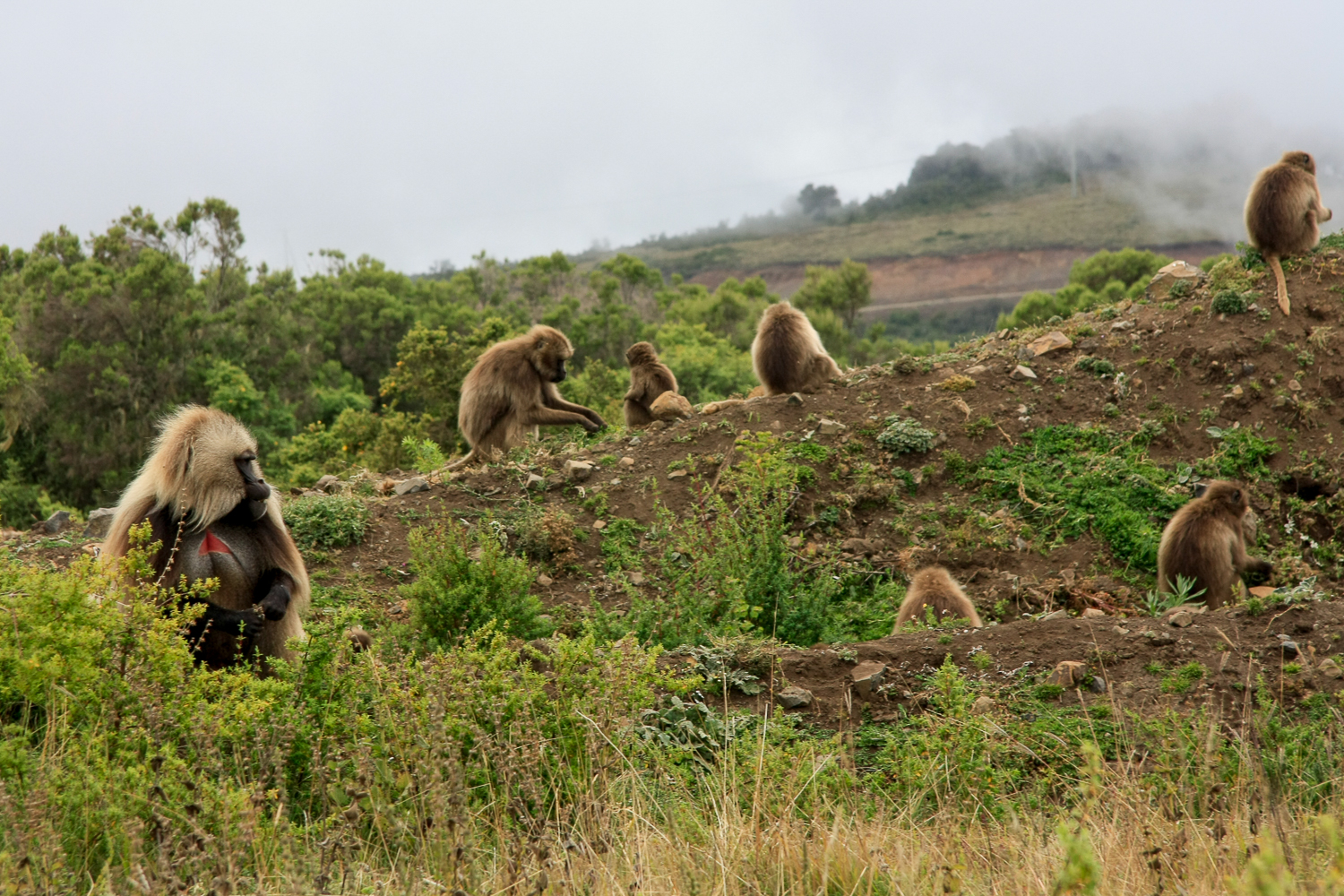 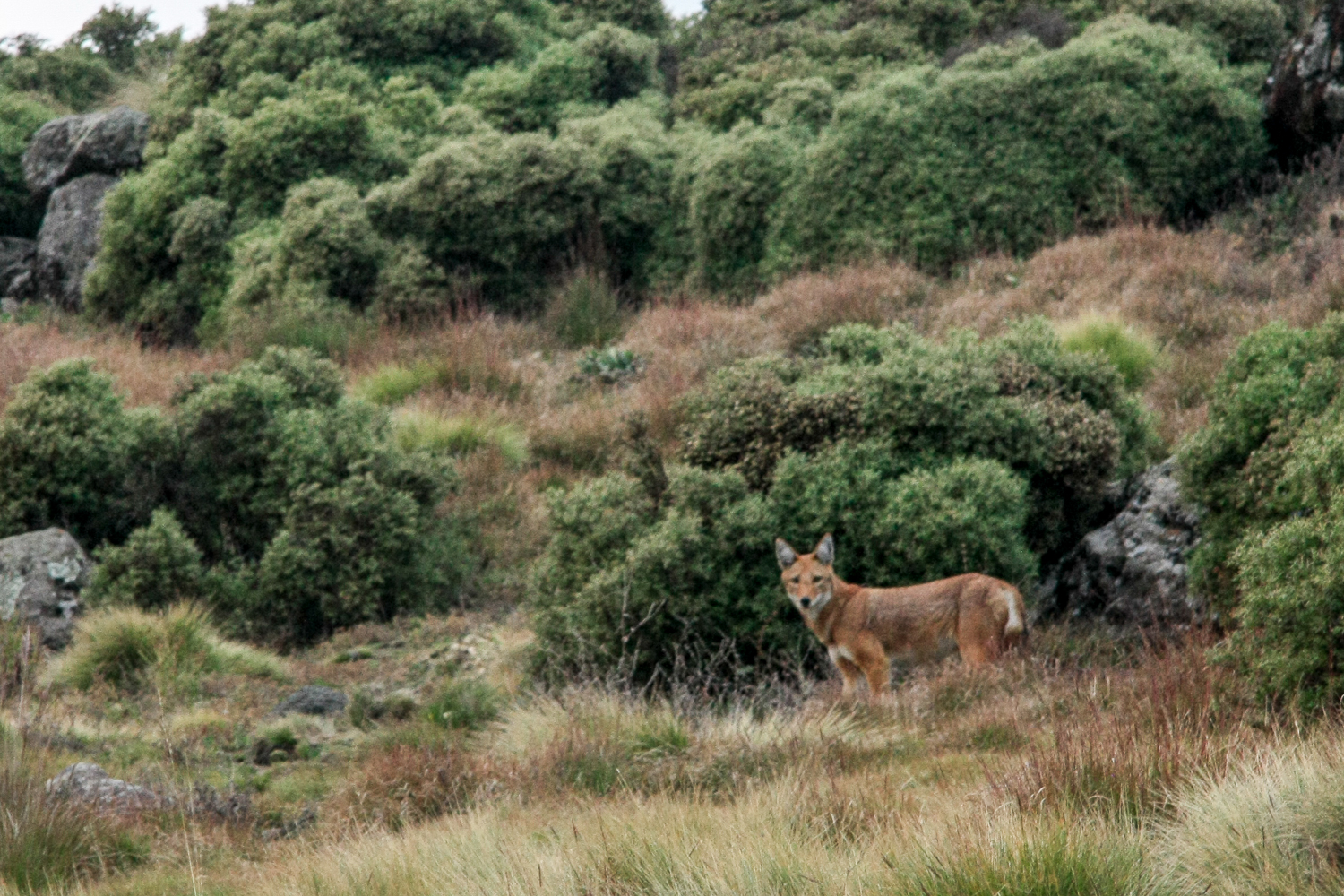 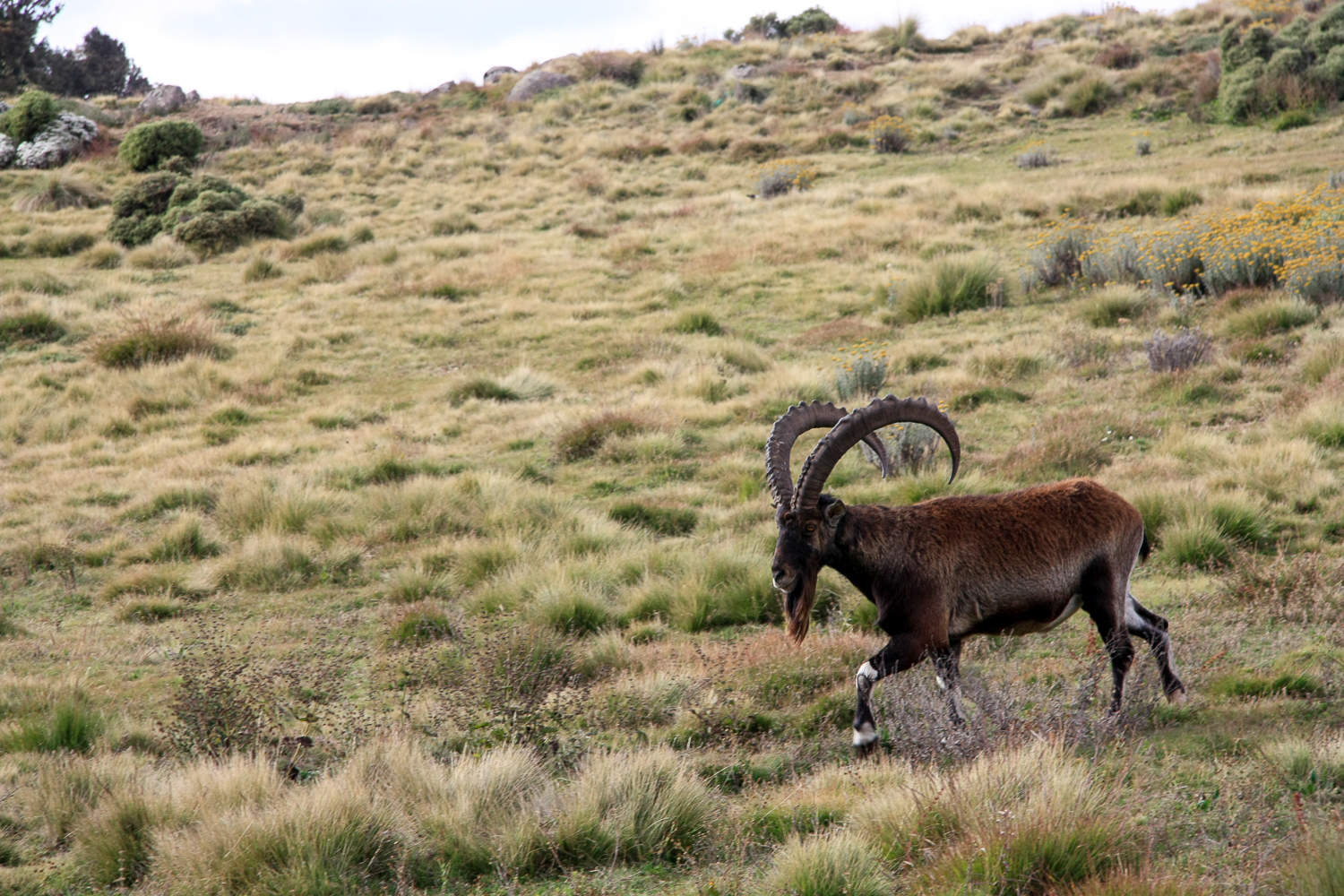 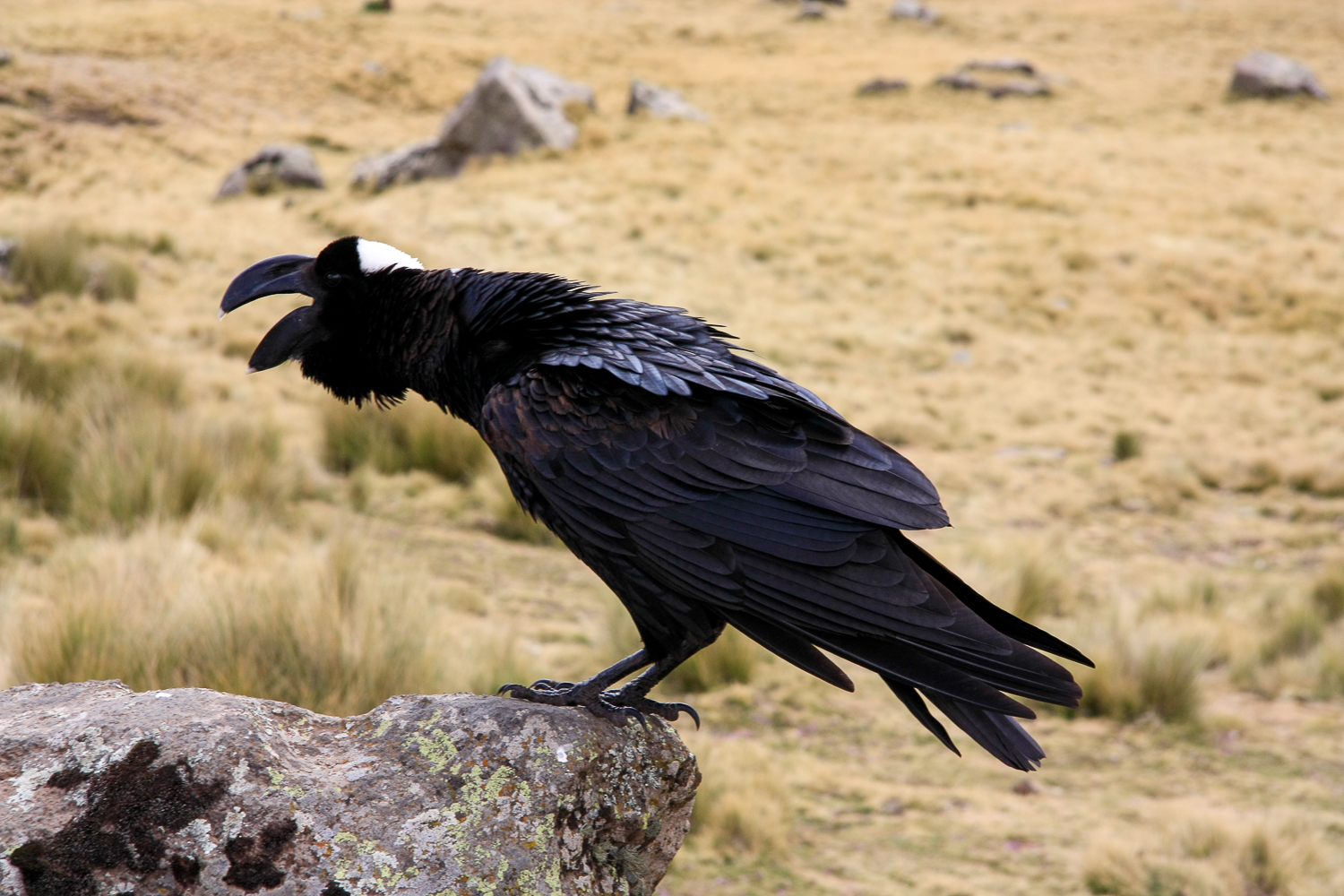 These mountains are a world away, and it’s kind of amazing to imagine the life that the 12000-or-so residents have. It’s not an easy one — making sure you’ve got all your animals at night lest the hyenas or leopards get to them (or, as Dawit explained with firsthand experience, receive a beating from your father for losing a precious animal), harvesting barley and wheat and hoping the weather cooperates, walking huge and often steep distances between villages (or even 2.5 hours just to get to school, one way) seldom connected by road. If you’re on the road and need to head back to Debark (the closest city), better be able to tolerate a very bumpy ride for hours atop a truck. If you need medical care, good luck.

The village of Gich, our midway stop, is due to be forcefully relocated by UNESCO by 2017, due to overgrazing by cows who risk spreading disease to the Ethiopian wolf. We walked through, greeted by children, and joined (for a small sum) a coffee ceremony held inside a woman’s house. The setting of straw-and-mud-and-cow-dung huts next to wispy fields of barley may seem idyllic, but living seems pretty hard; her four kids (“This one’s about 5. This one…I don’t know”) share a bed set above the cows and sheep (which generate heat), and the adults sleep on the benches by the fire (which fills the house with smoke), all under a thatch roof of dubious rain resistance. After setting out some frankincense, our host washed some coffee beans and roasted them over the fire, bringing around the pan of beans and letting us each smell the wonderful aroma. Then she ground up the beans with a mortar and pestle, boiled some water and mixed up the grounds, and served us three rounds of coffee: strong, medium, and weak. She offered us some injera made of barley (as opposed to the usual tef flour) with some potatoes. Mmmm! In the meantime, her kids fooled around beside her, playing with the fire and knife in the house. 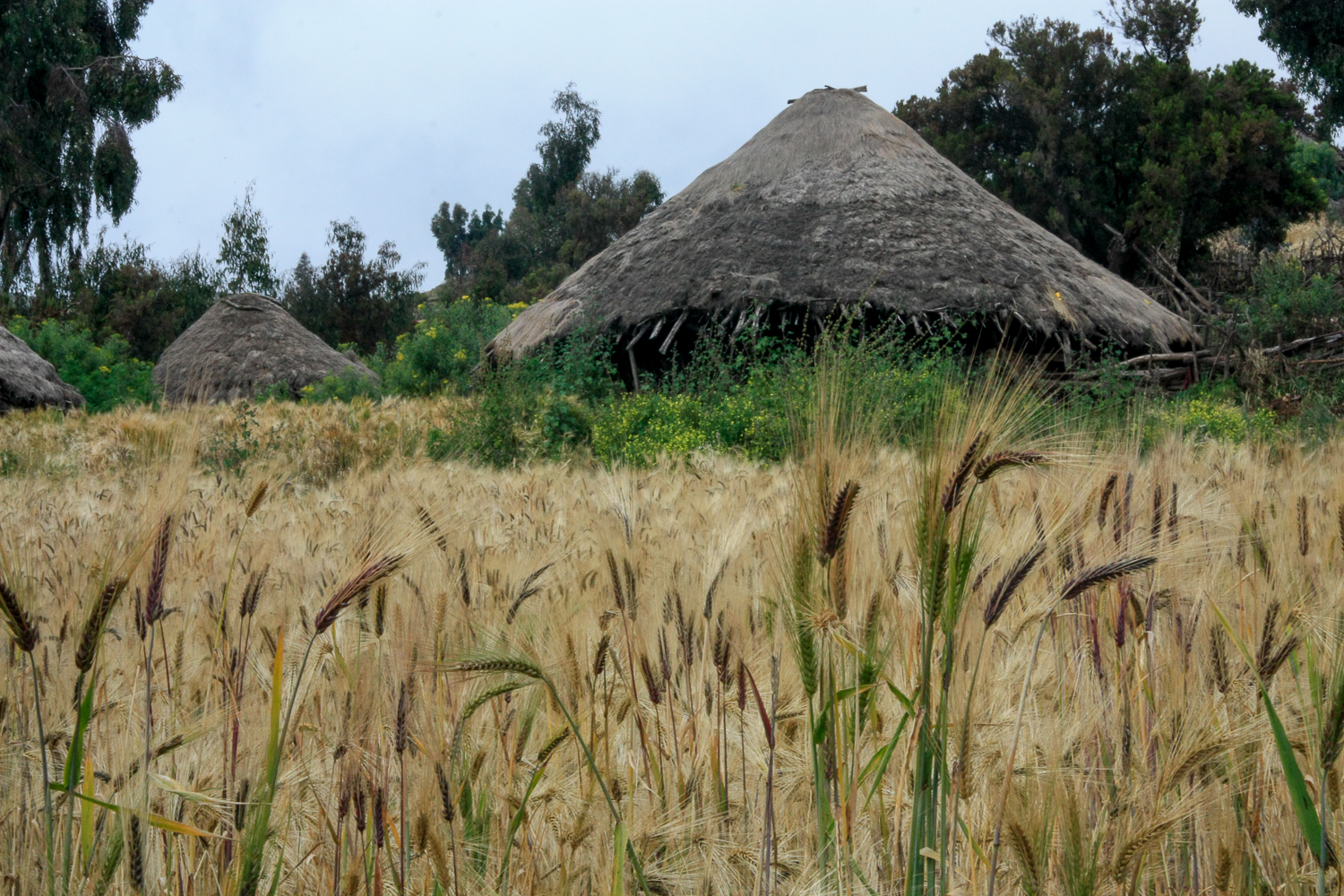 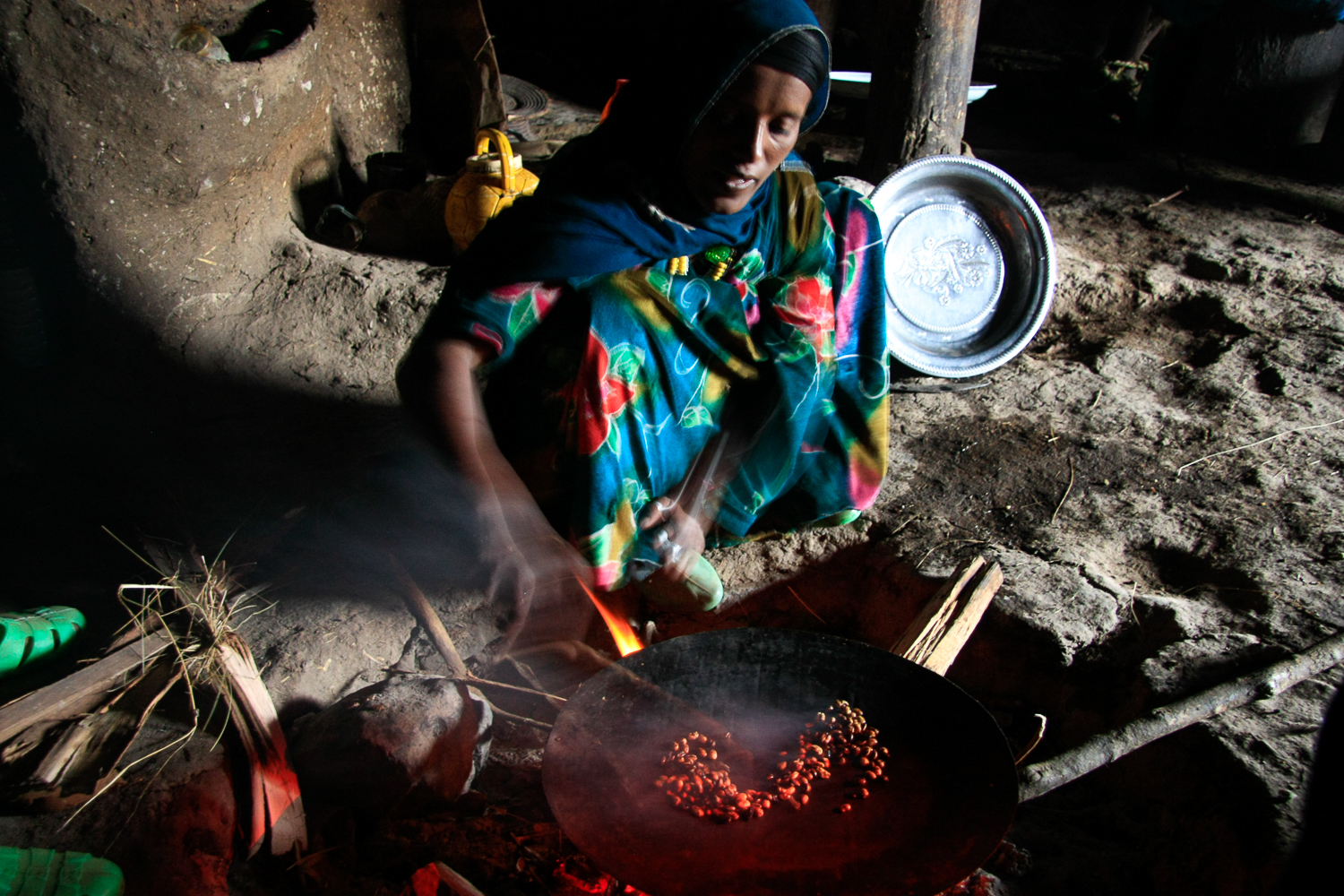 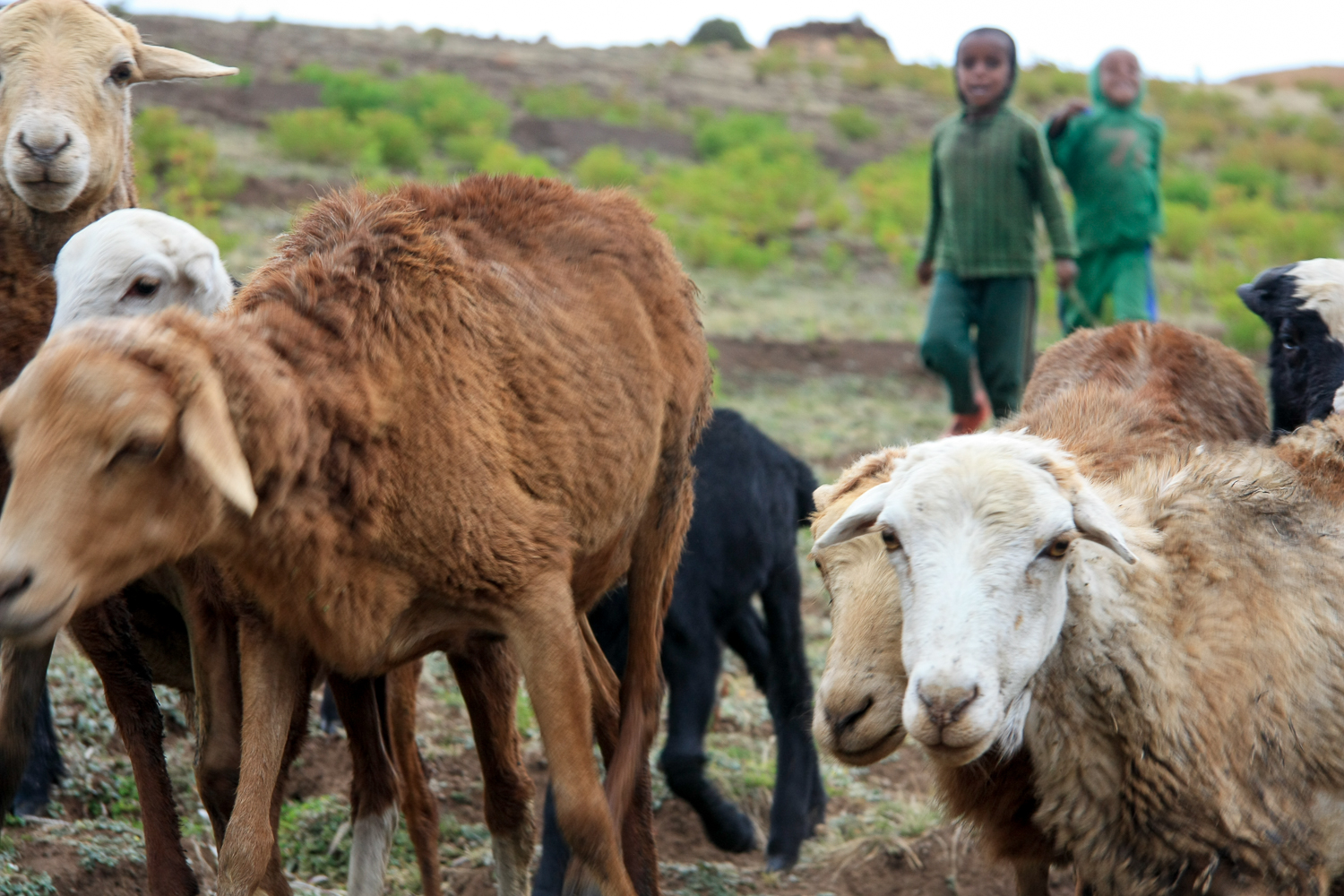 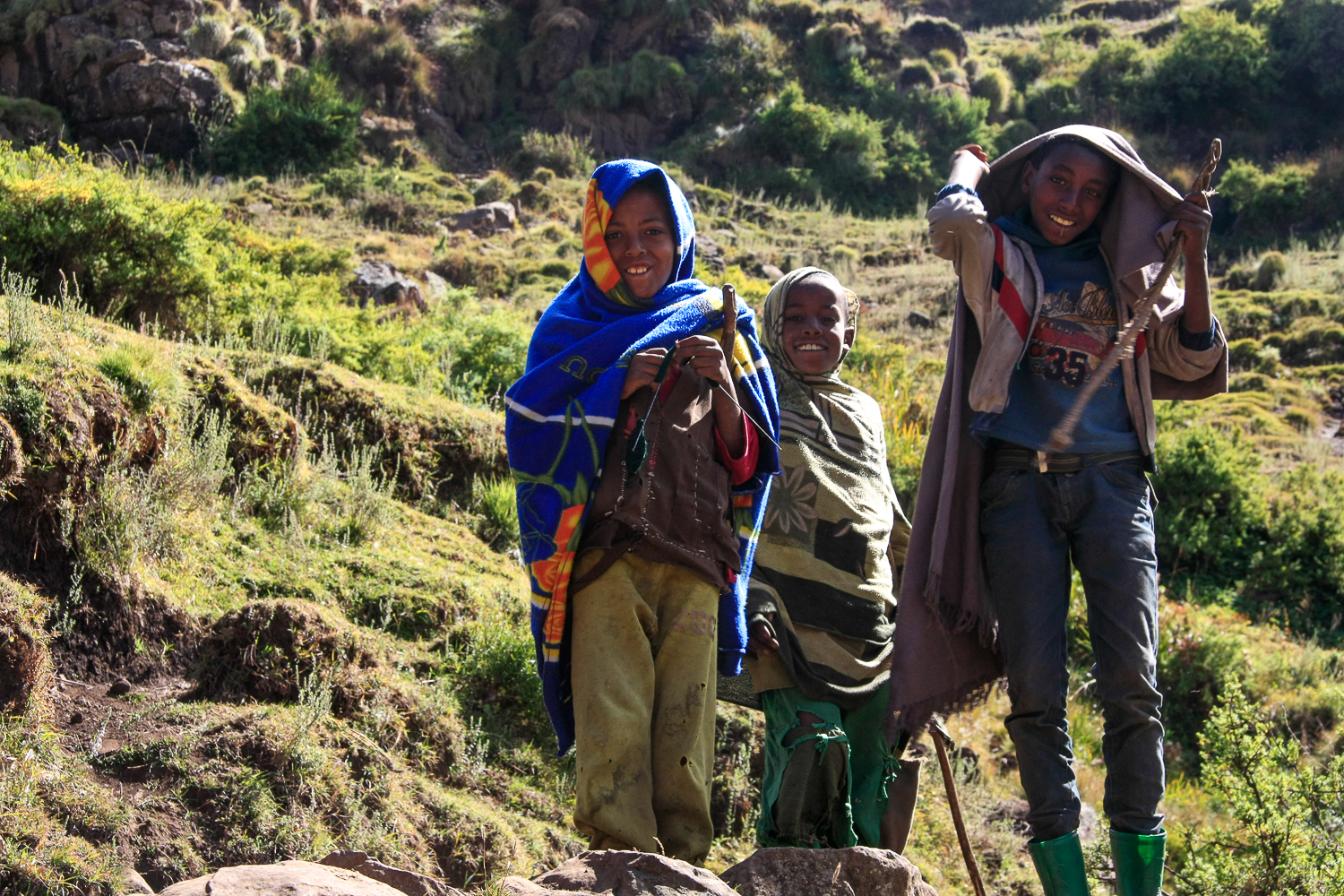 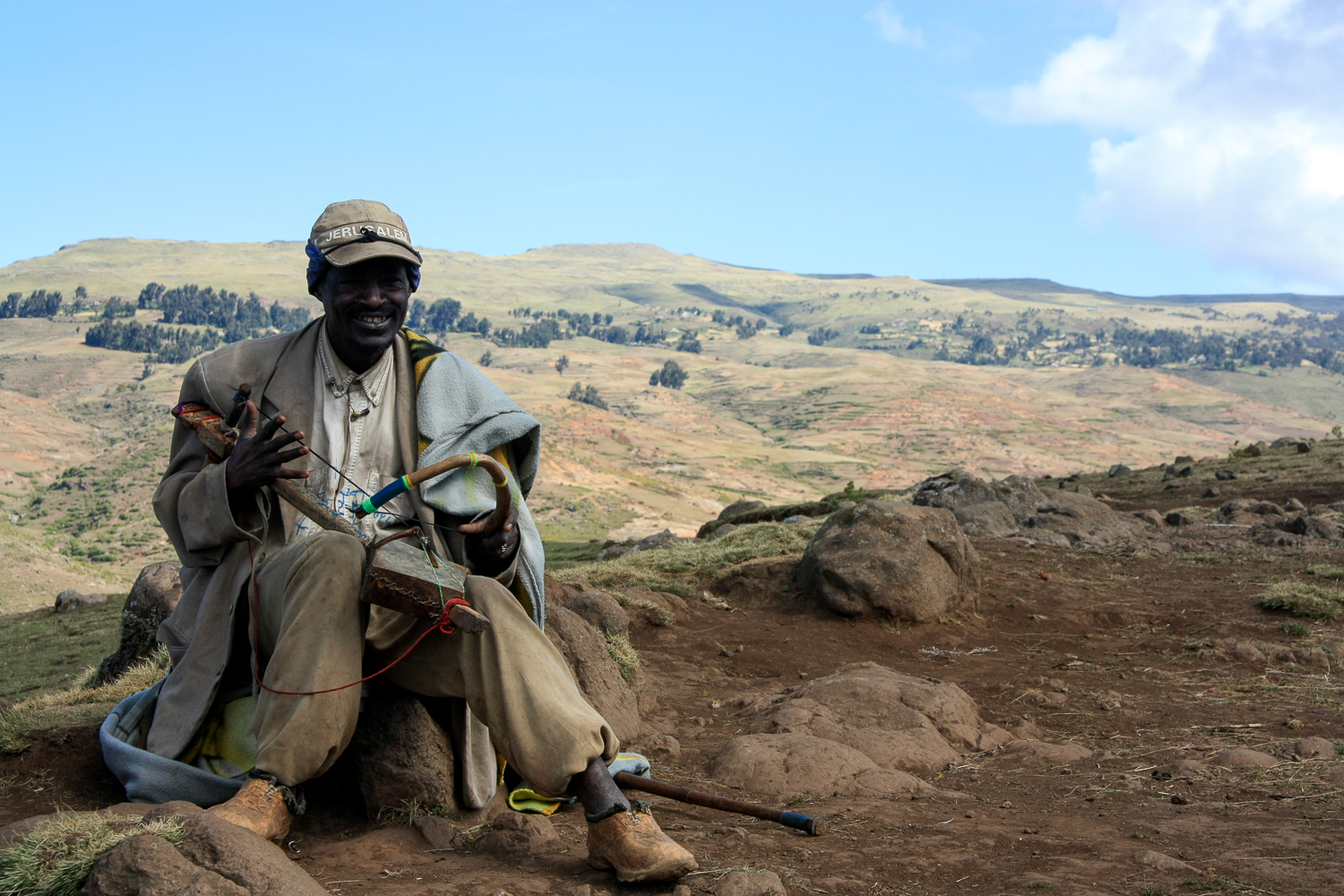 Is she happy about this relocation? Certainly not. The stipend the government offered wasn’t much (especially since she married into the village and thus gets none for herself, only for her husband), they have to leave their homes and everything they know, and they have to start from scratch — build a new house, find a means to make a living, and all that. The most the government can do is show them alternative moneymakers, like handicrafts.

As for Dawit? He’s got his dream job as a guide (inspired by a chance encounter a decade ago with tourists who took his photo, and the guide who found him again later and gave him a copy), with 8 months of work per year being enough to supplement a good life with disposable income. He loves the mountains and his home, and that was made very clear to us, but his parents (and he himself) knew the value of education (around 50% of Simien Mountains children get one) and the opportunities outside of the very difficult agrarian lifestyle. He knows where he came from and how far he’s gone, and now he and most of his 8 siblings live in the city or outside of Ethiopia.

For us trekkers, the mountains were amazing, a source of incredulity over several days of walking and being out of breath. It looked like paradise on earth. We had a campfire every night, and even a little beer-fuelled Amharic singalong shindig for the birthday of one of the other guides. For the locals, the mountains are amazing, their source of life but also their source of difficulty and stress. It’s the only thing they know, but they sure love the view too.