After being badly sunburnt from head to toe, carrying a bag of shoes still heavy and wet from the flash flood, little sleep, and 6 hours of buses whose interiors flash colourfully like mini discos and have subwoofers blaring out upbeat Sinhalese pop music non-stop… I gotta say, just arriving in Haputale was a welcome reprieve. More tea estates? Yes please.

A small town perched on the ridge of a tall mountain, with expansive views of mist-covered peaks on one side and a tea estate and village-covered valley on the other, the geography of the town was such that getting around was far easier by walking along the train tracks than along the road. So I did just that, walking towards the outskirts of town to find a guesthouse. The first thing I notice? Butterflies, everywhere. (Given how tiny they are, they’re pretty hard to photograph.)  You literally can’t turn your head anywhere and go more than two seconds without seeing a butterfly. With the fresh air and the pleasant locals, all smiling as we passed each other going opposite ways on the train tracks, I was pretty much enamored by the town within five minutes, before even finding a place and putting my stuff down. 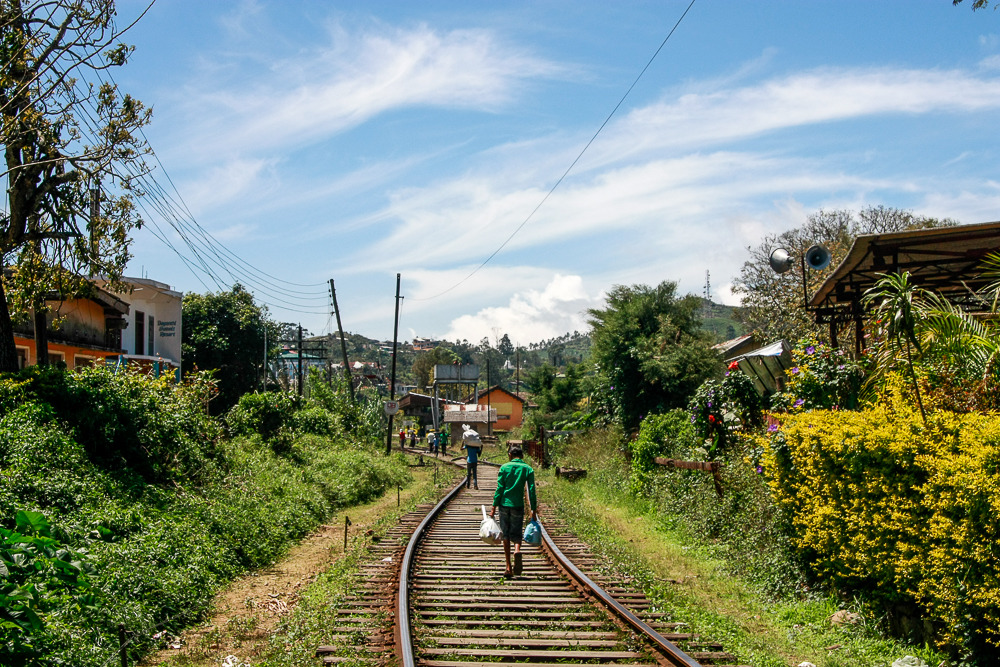 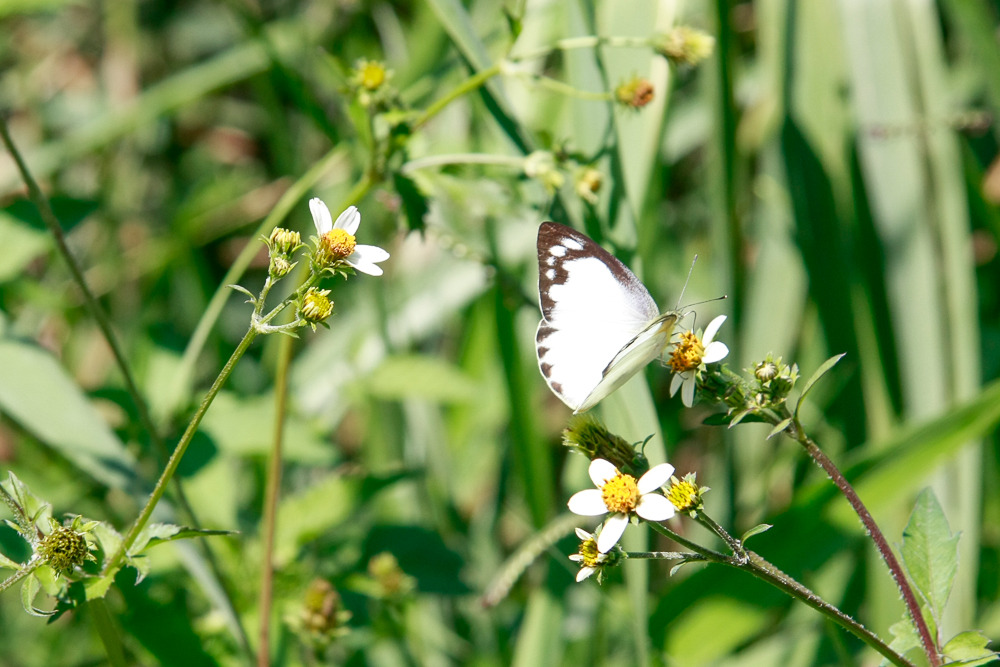 And even when I did find a place, the hospitality! Paul, my guesthouse owner, pretty much immediately served me tea without even asking. Yesssss. When I mentioned I was from Canada, he mentioned his daughter in Montreal. Pretty interesting that so many Sri Lankans I’ve talked to seem to have a personal connection way abroad — and I think just because I was from the same country as where his daughter now lives, he made me a wonderful dinner for free!

Paul provided me with a ton of suggestions on places to go, so I happily obliged and walked three kilometres to the Adisham Monastery. The monastery itself — formerly an English colonial-era mansion, now used by monks who make jams, sauces, and chutneys — was pleasant, but it was really the opportunity to walk along a ride with an incredible view and the universally smiley and upbeat people I passed along the way that made it memorable. 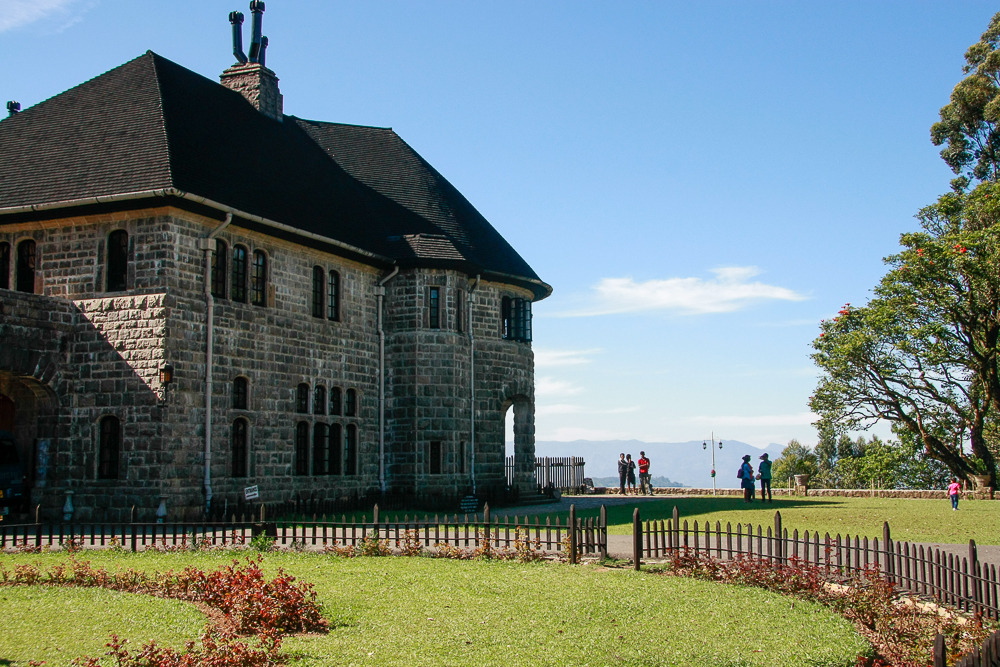 Early the next morning, on Paul’s advice, I took a bus to Dambatenne and a tuktuk up to Lipton’s Seat, where — you guessed it — a certain Sir Thomas Lipton used to host guests and admire the view. And what a view it is! At 7 am, before the mist rolls in, being virtually the only person there save for the attendant at the tea hut, I was left speechless. And yeah, having tea up there? That’s a perfect moment. 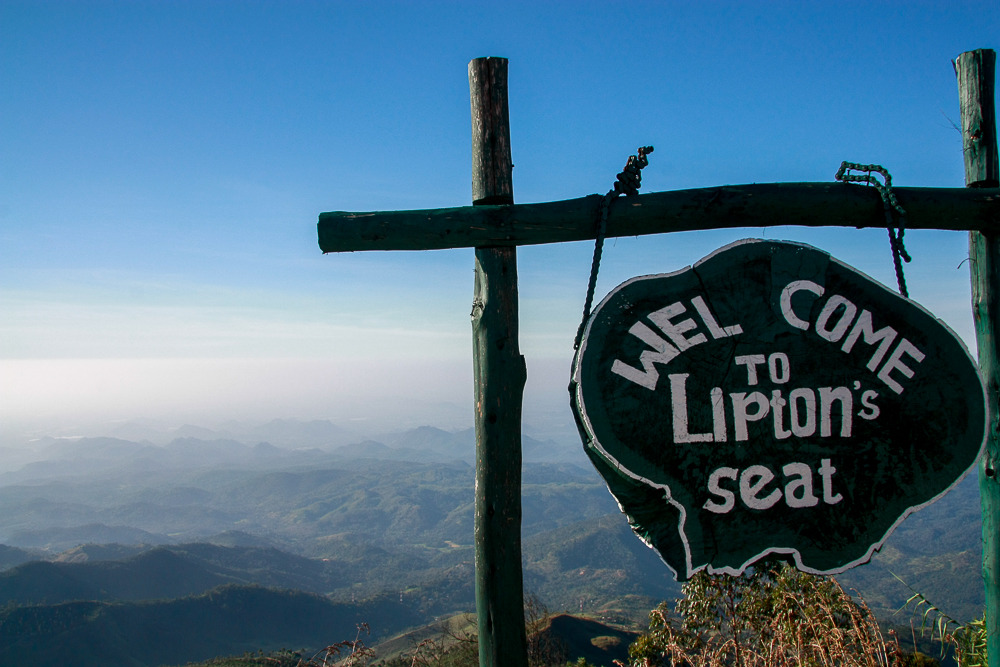 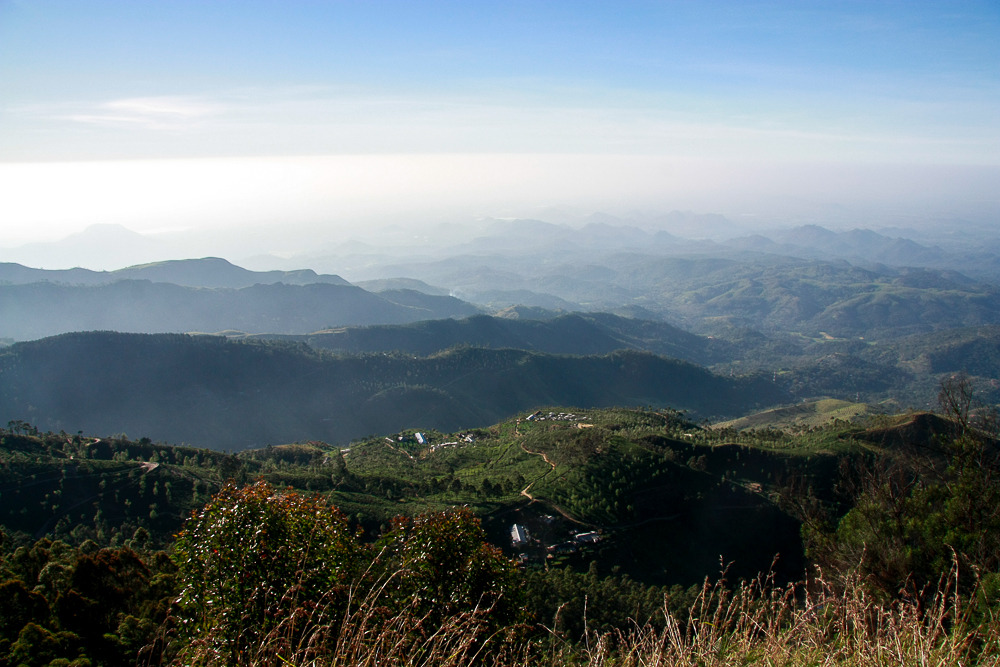 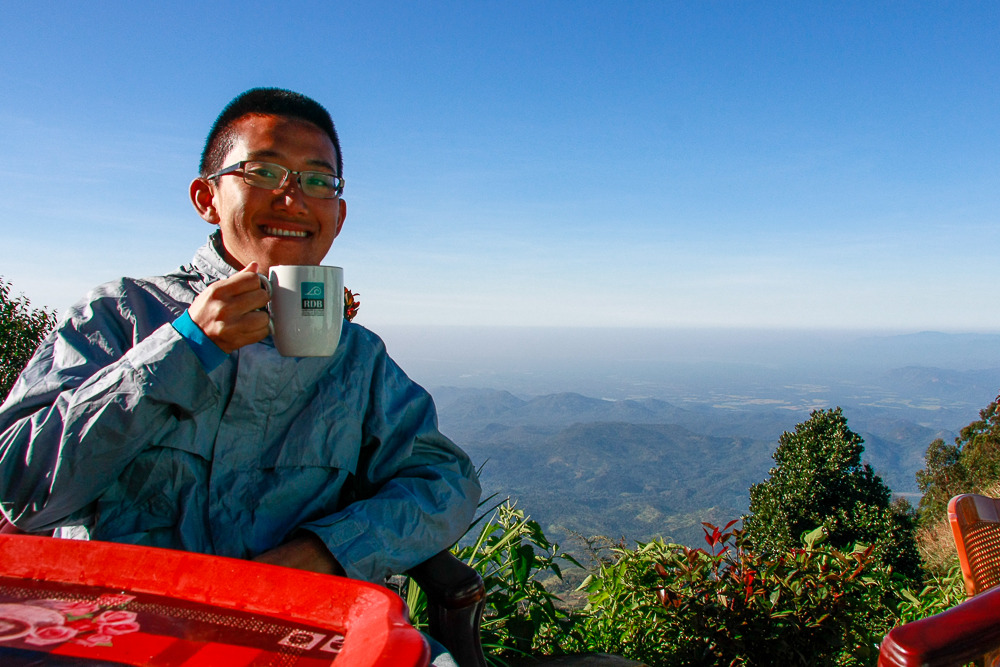 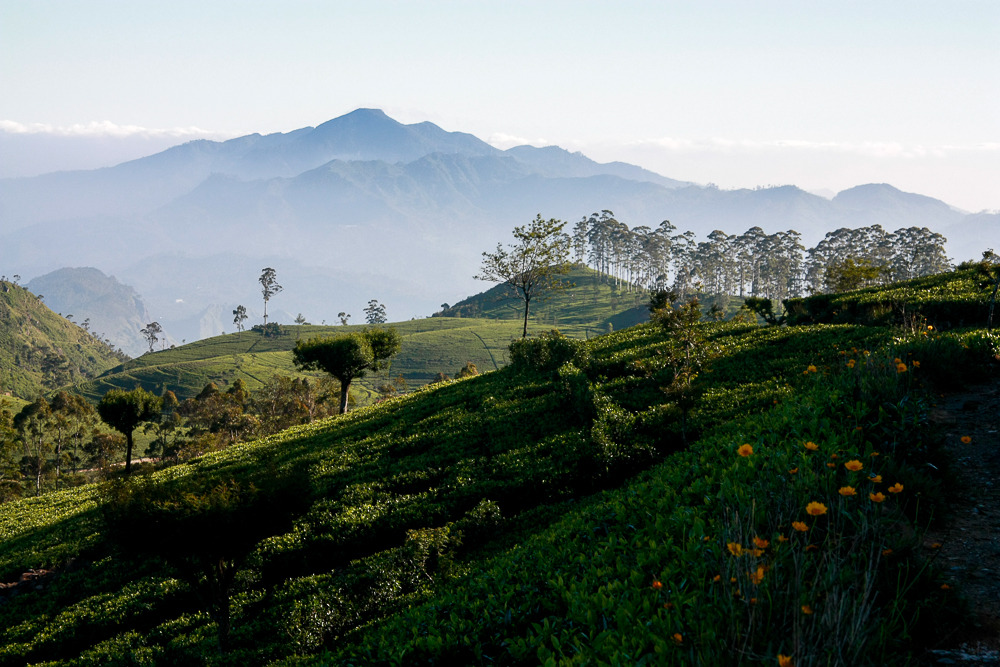 How is this even real?!

Over the course of the next couple hours, I walked my way back down, taking my time to enjoy the scenery along the road that I had just zoomed up. I was soon detoured by friendly tea-pickers, who would yell “Good morning!” as I passed no matter how far I was, then beckon me to join them. Despite their limited English (they’re all “plantation Tamils” — descendants from the era where the British brought them in from India to work; not native Tamils of Sri Lanka) and the fact that they were working, picking leaves at a furiously blinding pace, they were all welcoming and more than happy to chat (well, basic English plus “vanakkam” and “nandri”), even beckoning me to take some photos. 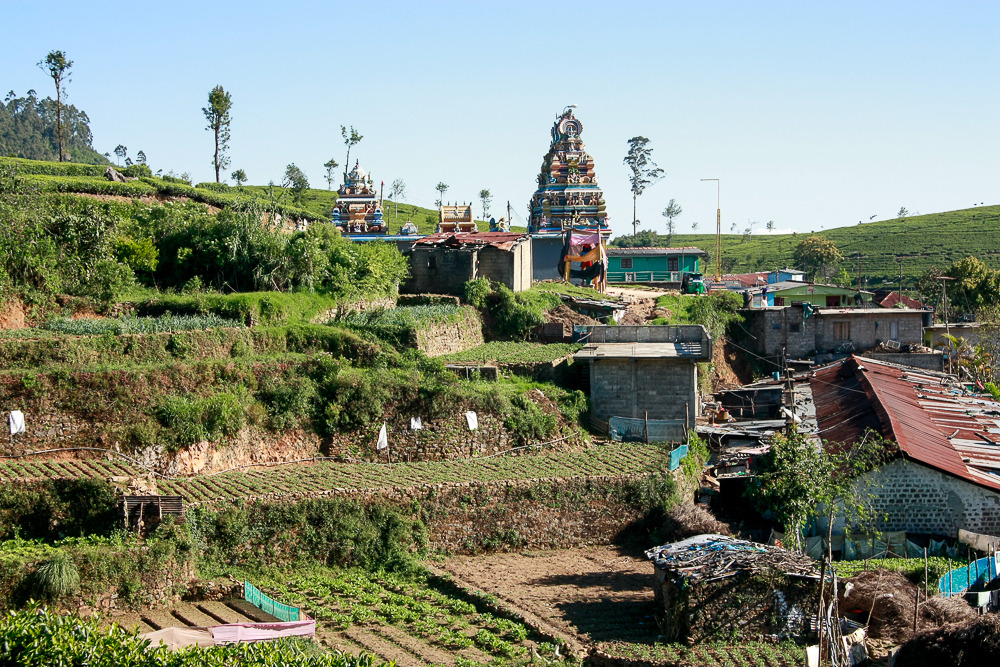 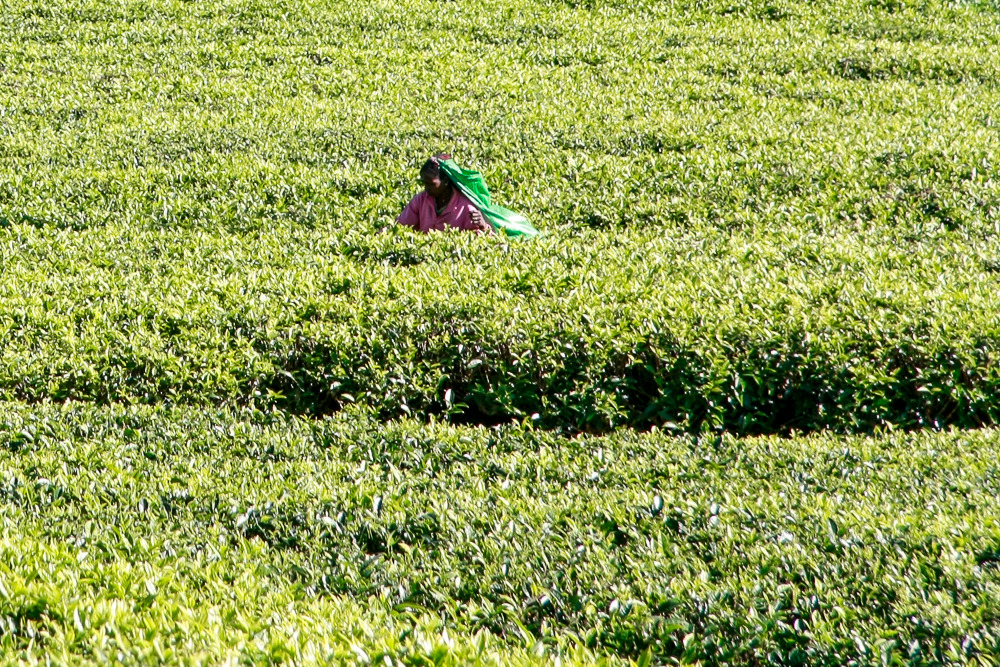 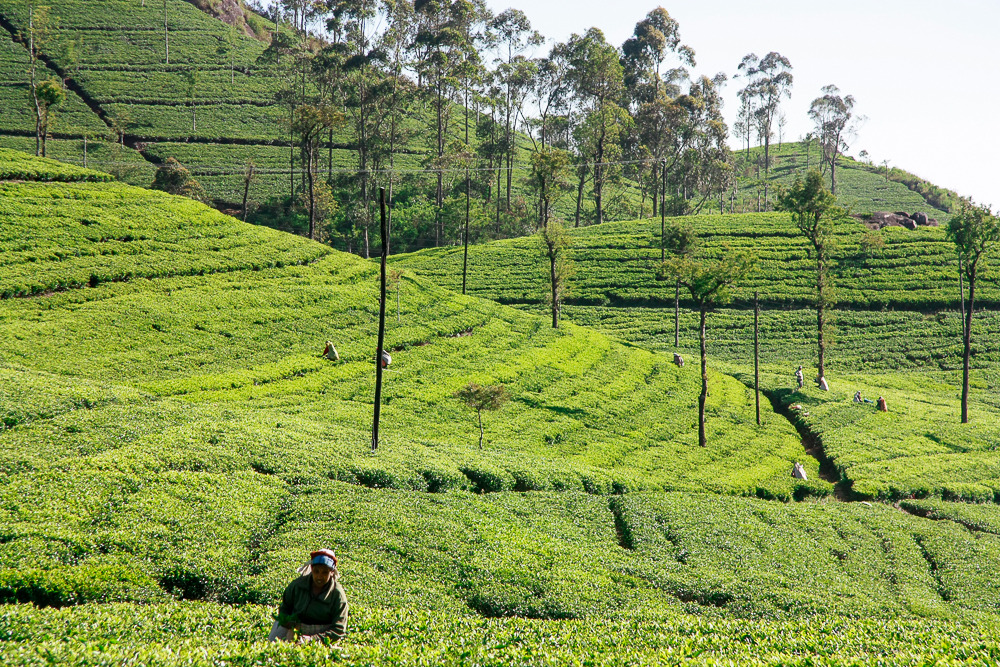 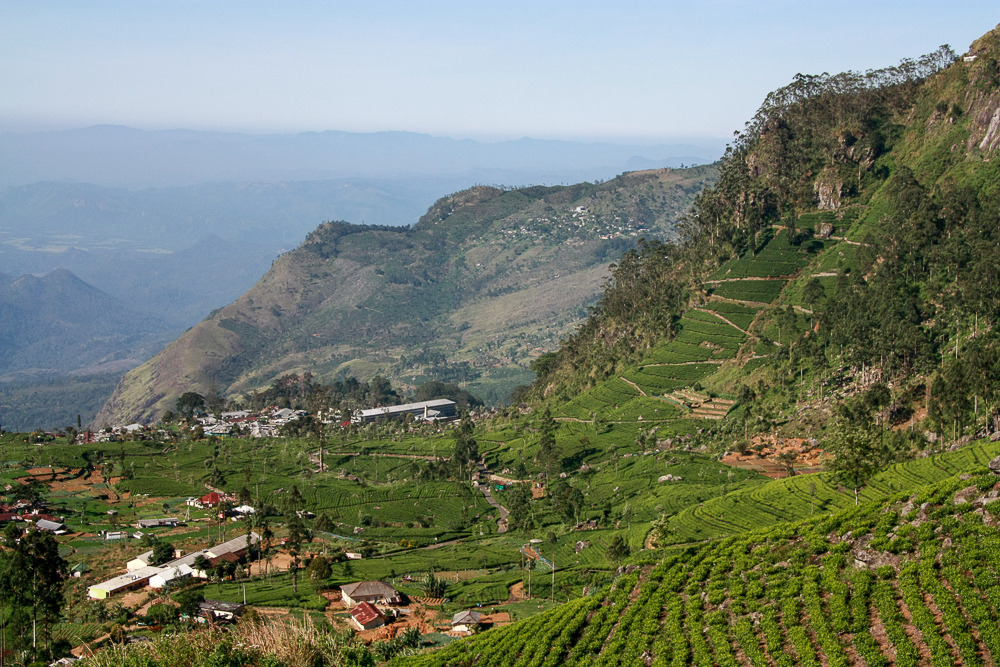 Eventually, I got lost inside a tea estate, and had to wander through a tea workers’ village to find my way back to Dambatenne. A little bit hapless in a maze of houses and rice terraces, I elicited a few giggles from villagers, who all simply smiled (as I nearly trampled over their food crops) and pointed me in the right direction. I was asked a few times to take photos for locals, who then ran inside and gave me their address, hoping I would mail the photos to them! I should probably get on that. 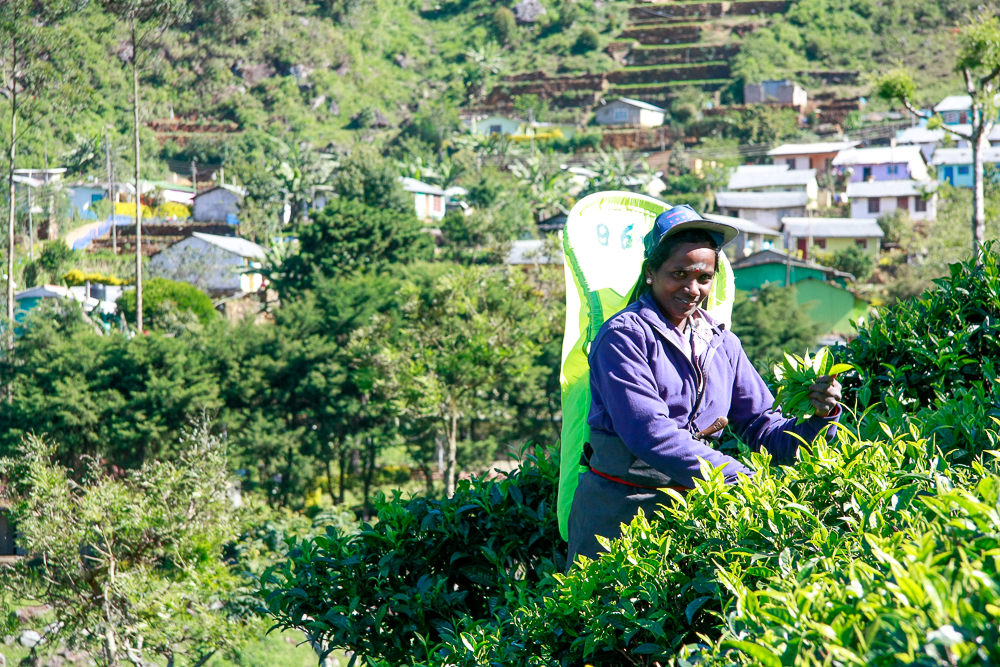 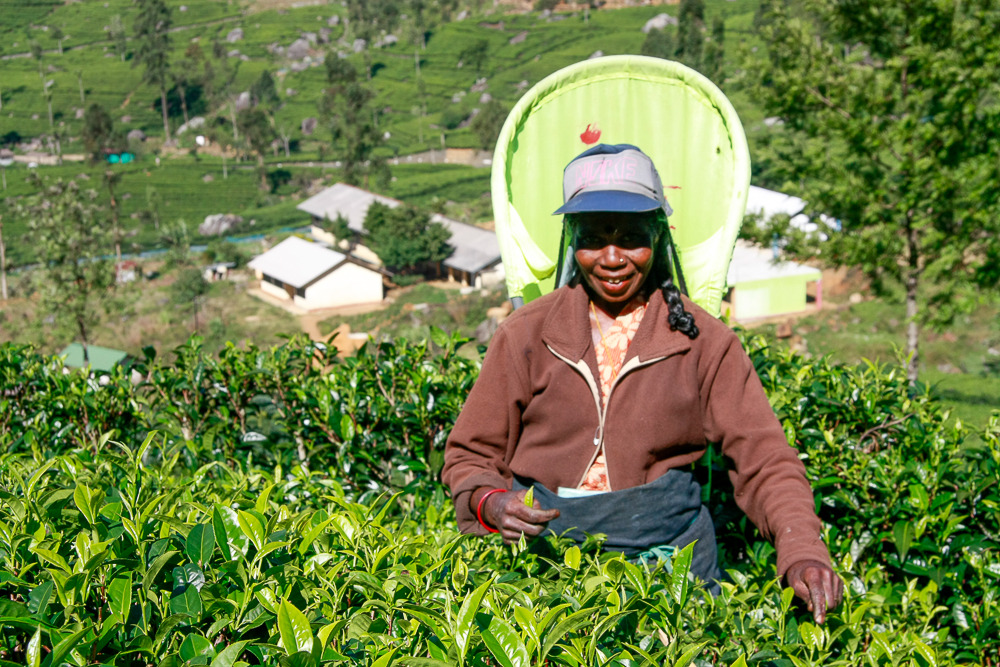 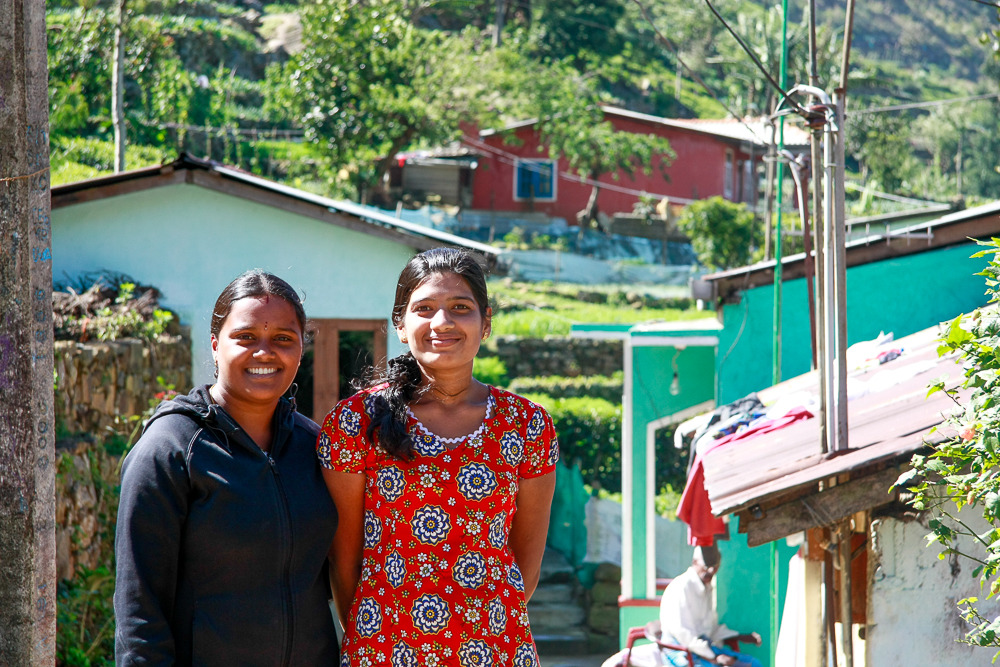 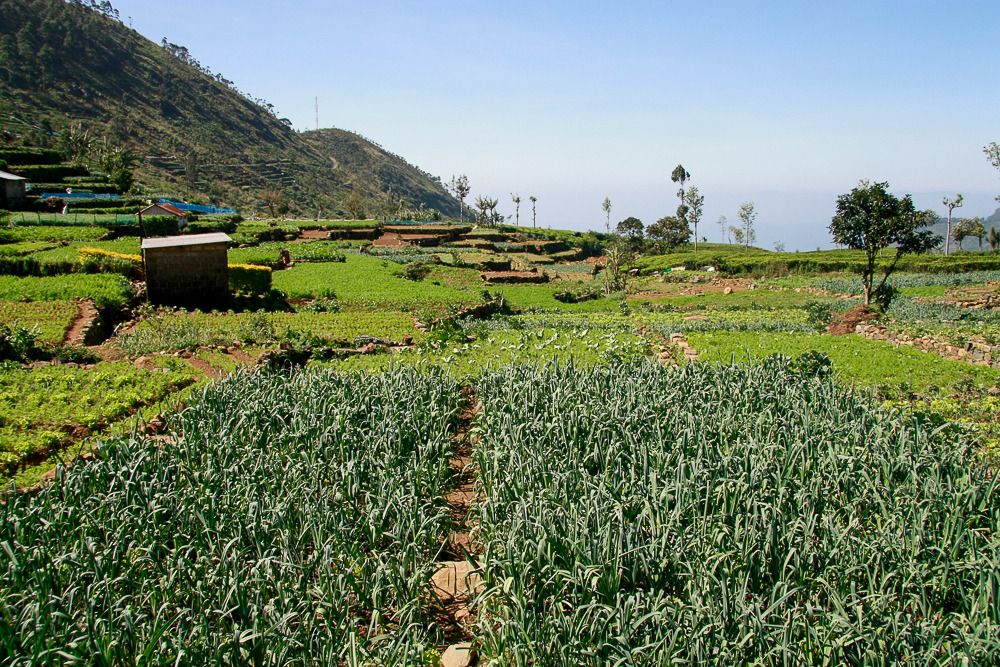 Finally returning to Dambatenne’s tea factory, I opted for a tour of the facility, built by Sir Lipton in 1890 and still using much of the same equipment from that time. Operations at the tea estate here are pretty similar to that in Munnar. Workers pick a whopping 11000 kg of tea leaves per day, which yields 2000 kg of finished product after multiple runs through dryers and sifters. Each worker gets 630 rupees per day (300 Indian rupees, around $5) for picking 14 kg of leaves, scaling up and down accordingly, along with accommodation, pension, and other benefits.

I was pretty surprised to learn how many classes of tea come from the same process. Aside from the picture below, the tea is further separated into grades. Highest grades tend to be exported while lower ones are for the local market. There are myriad classifications, even just among black teas — whole leaves for OP (orange pekoe), broken leaves for BOP (broken orange pekoe), BOPF (same thing, but “fanning”), all the way up to FTGFOP (“finest tippy golden flowery orange pekoe”, or rather, “far too good for ordinary people”), and all the way down to powder and dust, which apparently need milk to taste good. Heh. 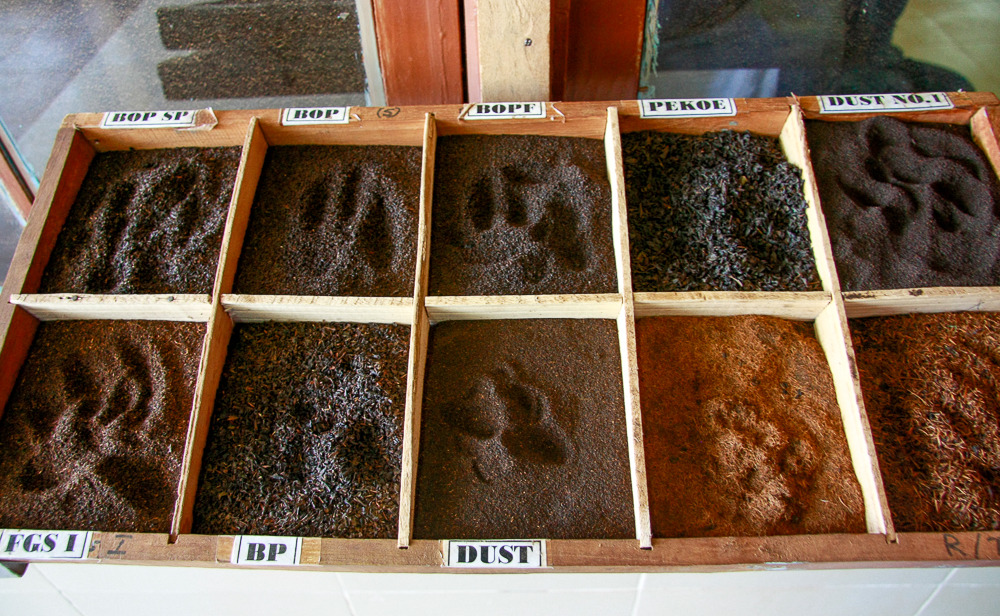 Lipton made Ceylon tea (Ceylon is Sri Lanka’s former name, a British version of “Ceilão”, which itself is a Portuguese version of “Sinhala”) a household name, largely by price undercutting, accessible packaging, relentless marketing, and making it a product not just for the rich, but for the masses. While Dambatenne has been nationalised by Sri Lanka now, it still sells 60% of its product to Lipton, which now sells tea primarily in the form of blends, sourced from all over the world. As product-placementish as this all sounds, it did fundamentally change Sri Lanka’s economy.

I definitely wanted to buy some tea direct from the factory. For only 600 rupees, you get 100 tea bags! Way too big to carry, unfortunately, so I had to pass.

Later that day, I hopped over to the nearby tourist town of Ella and did a quick hike to Little Adam’s Peak, in preparation for the big Adam’s Peak the following day.  An easy hike past various tea estates, I was quickly rewarded with a view of the Ella Gap. 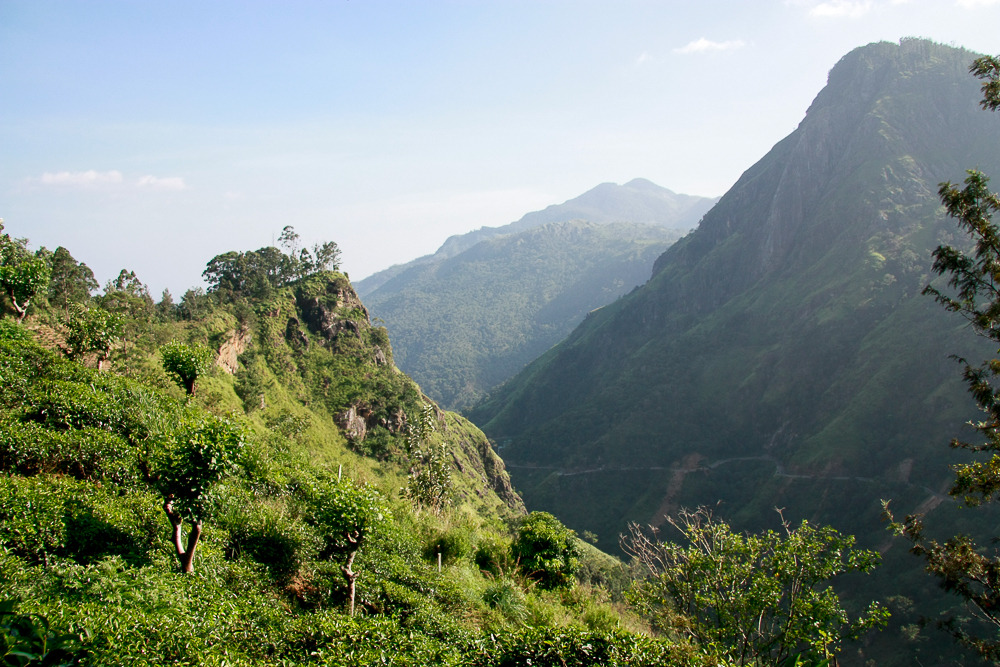 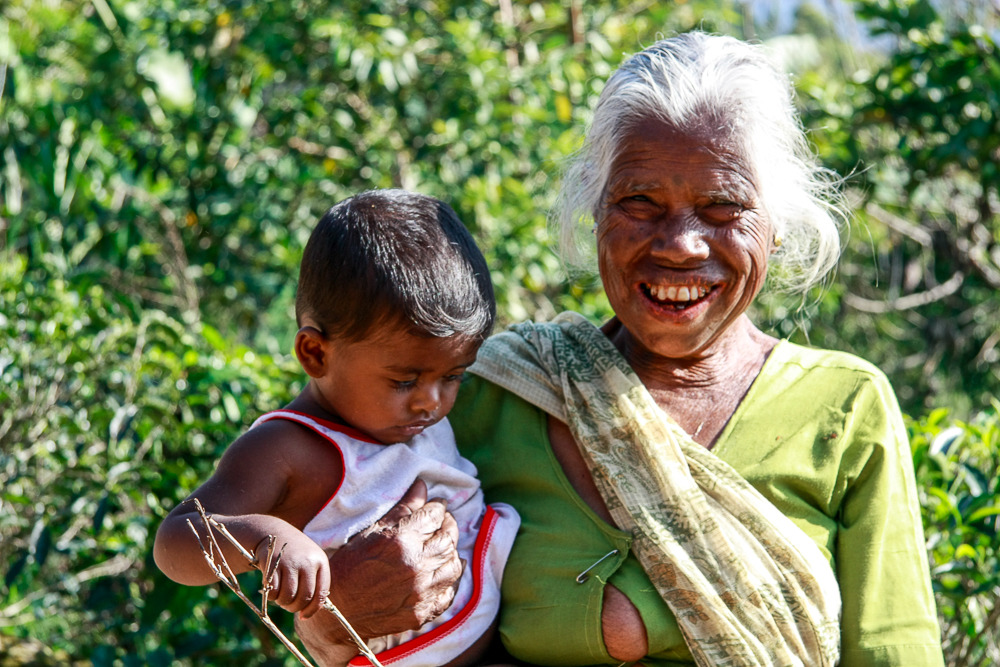 Despite the plentiful hikes in Ella, I kept it short at just one. But my heart really stayed in Haputale, which had a far more low key vibe, with less overt tourism — not to say that Ella was bad — and a better look at local life.  In between everything, I spent my mornings in a small “hotel” (restaurant) in town, gorging on piles of food pushed to me by a very friendly lady who eagerly tried (and failed) to expand my Sinhalese vocabulary; afternoons in an Internet cafe with a man who eagerly tried (and failed) to engage me in Hindi conversation, oddly enough; and my nights freezing, and watching cheesy melodramatic Indian Tamil dramas over dinner with Paul, who eagerly tried (and failed) to expand my Tamil vocabulary (at least it’s now a couple words more than just kolaveri, thank goodness). I hadn’t had a better time anywhere else on my trip.