It’s taken me seven years to say this: I miss home. Having not been home for nine months — the longest stretch between visits I’ve had — made this visit that much more special. Even though I’ve travelled to and lived in some wonderful places and have so many more left on my list, at this point, I’m pretty sure that I’ll ultimately come full circle and end up in Vancouver.  It’s always going to be home base for me.

I’ve always been an ocean guy — Boston’s next to the Atlantic, and Vancouver the Pacific, and they’re both beautiful cities… but face it.  The beaches?  The mountains?  The forest?  Vancouver’s got that in spades.  Put it all together, and you’ve got my heart.  Where else can you see a skyline that includes all three, let alone those ubiquitous shiny glass buildings?!

I visit two or three times a year, and while I could make a run of doing the same things over and over again, there’s always something else on offer that I’ve never tried, despite living there for most of my life. So the only logical approach? Blend the two together! 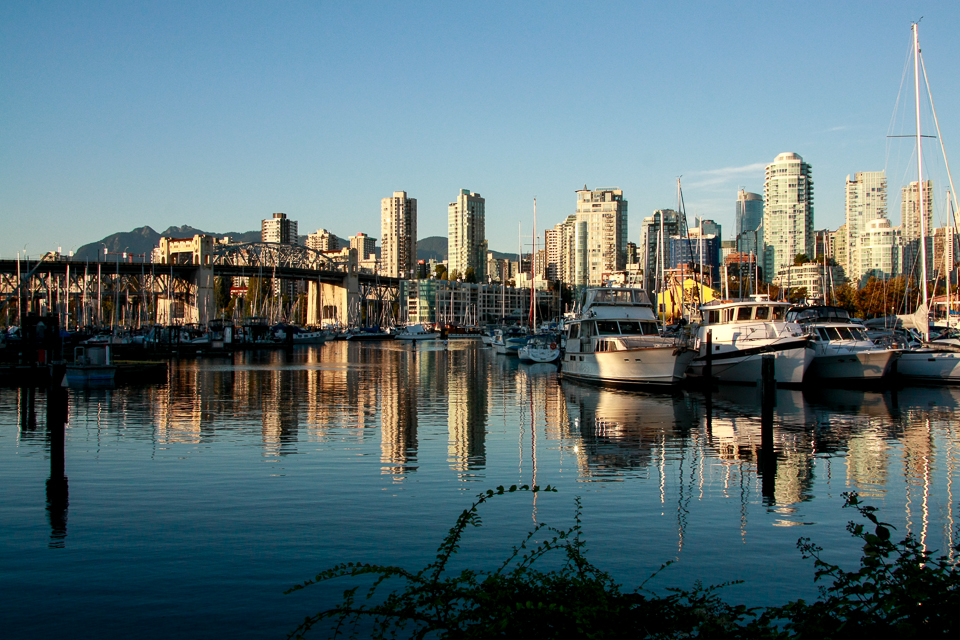 This is the number one thing for me, easy.  Even past all that nature stuff.  I save all my dim sum and sushi and fried noodle and Chinese-style deep-fried French toast cravings for my trips back home, because I know it can hardly get any better than the stuff in Vancouver.

Vancouver has a significant Asian population, forming almost the entirety of the 52% “visible minority” statistic.  More specifically to me, Vancouver is 30% Chinese alone.  The suburb city of Richmond, where I spent much of my childhood, is 50% Chinese and 70% visible minority (“majority minority”) in general.  I never did feel like a “minority” while growing up!  You hear Chinese all over the streets, and I do recall some of my grade school classes being 80-100% Chinese.

Chinese, Korean, Japanese, Punjabi, Malay, Filipino, Vietnamese and more all are in abundance — both language-wise (you’ll see the first four of those languages represented on the directional signs at Vancouver International Airport) and food-wise.  It’s generally awesome, save for the occasional cultural divide.

Where that divide doesn’t exist, though, is the Richmond Night Market.  It’s gotten a bit expensive nowadays, but there’s nowhere else where you can find the same dizzying array of food options.  What’s considered “foreign” or “obscure” even in multicultural cities like Boston — come on, you’d be hard-pressed to find people who know what takoyaki or stinky tofu is, let alone find it delicious — is commonplace and consumed by all.  (Food aside, you can also enjoy the array of cheap socks (the only thing I buy), Asian humour lost in translation, samurai swords, glowing shoes and glowing drinks, cell phone paraphernalia, and probably-fake CDs and DVDs of both Western and Asian media.) 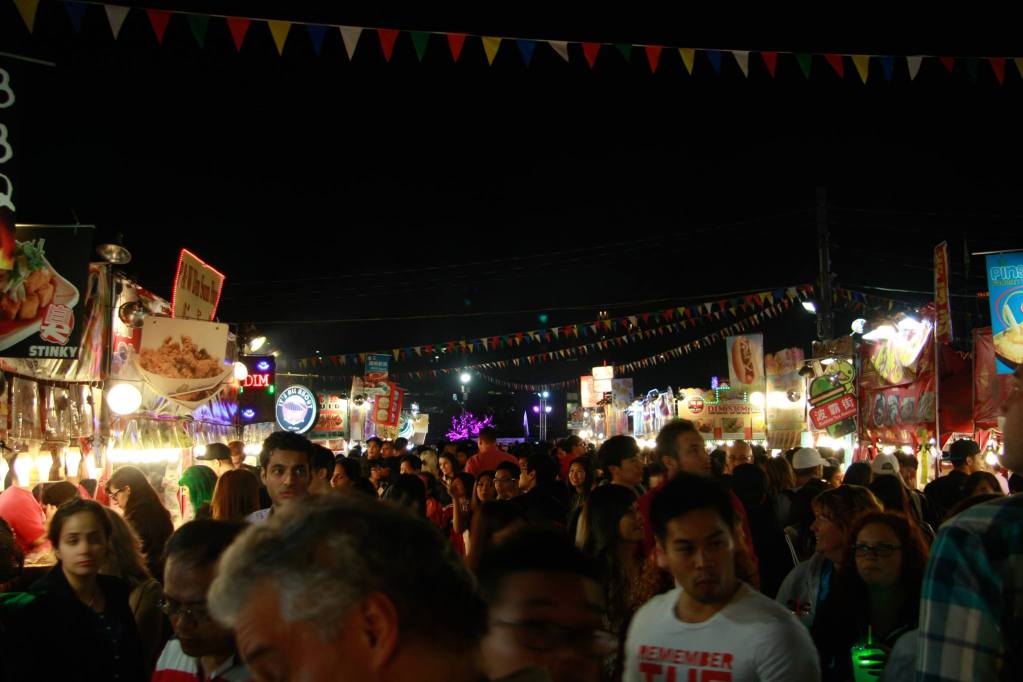 That’s not to say the non-Asians are behind on the food front or the night market front — there’s now the Shipyards Night Market in Lonsdale Quay, a smaller market but equally diverse and creative, just with a different mix of countries and a heady regional contingent.  Plus, that line of food?  If we didn’t have a dinner to get to the night we went, we would’ve stuffed ourselves full of pierogies, crepes, coffee buns, Canadian butter tarts, salmon jerky, gelato, and vegetable-flavoured chocolate.

2/ Take a daytrip with the parents

Having run the gamut of daytrips in New England and beyond, I’m continuously awestruck by how many amazing places exist in the Vancouver area that I’ve never heard of.  They’re a stone’s throw away by car, and give me an opportunity to drag my outdoors-averse parents out to truly enjoy the land they immigrated to.  (Because why else did I grow up in Vancouver?!)  I always enjoy taking them to the ocean.

North of the city seems the way to go.  We’d already done Deep Cove and Bowen Island — both centered by quaint, scenic harbour-villages chock full of art galleries.  What completely escaped my radar until this trip is the Sunshine Coast — a 40 minute car-ferry ride from Horseshoe Bay.  On BC’s mainland but with no roads connecting to the rest of civilisation, it retains a occasionally-hippie, secret-hideaway vibe — though that secret seems to be getting out, judging by some foreign backpackers I saw.  After every bend in the road is some hidden cove or beach or village or artist colony or farm or… my parents loved it.  I loved it.  And we only drove from Gibsons to Sechelt to Secret Cove — didn’t even get to see the Skookumchuck rapids or hit up the second ferry to Powell River, and still had a great time!  Plus, where else can you have a dinner of sockeye salmon fish ‘n chips with a view of a sunset over a harbour, forests, and islands — and not have it break the bank either? 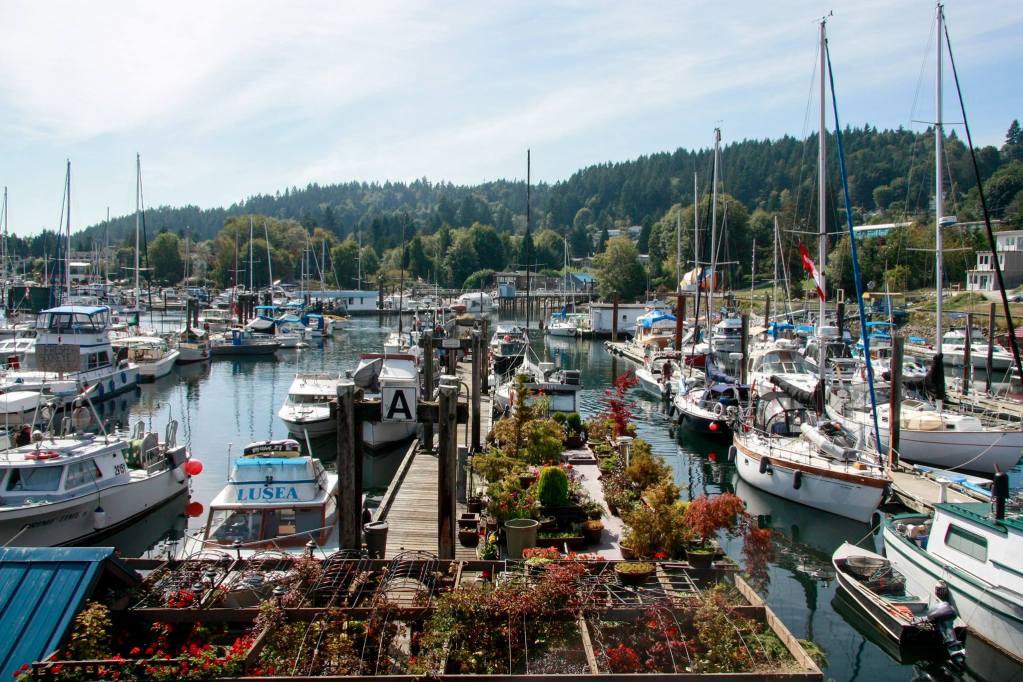 The slow pace, quietness, idyllic locales, candidly warm locals, and ecological focus are things so commonly found here.  People here know how to relax and how to live.

I’ve taken to just grabbing every BC tourism brochure I see and giving stacks of them to my parents.  They appreciate it.

While my home may be geographically closer to Vancouver’s more…liberal Wreck Beach (read: clothing-optional), my preference has always been Jericho Beach and Kits Beach.  I’ve never swam in Vancouver’s waters, but it really doesn’t matter to me here.  That view though!  Tankers and an infinite view of ocean on the left, big mountains straight ahead, and the shiny glass of downtown on the right.  Plus, Jericho Beach has a rabbit infestation — terrible but too cute.  You also get to see Vancouverites be stereotypically Vancouverish — jogging everywhere, biking everywhere, yoga everywhere, lattes everywhere, paddleboarders everywhere, sailboats everywhere, and even jet-boots (okay that’s a bit more rare). 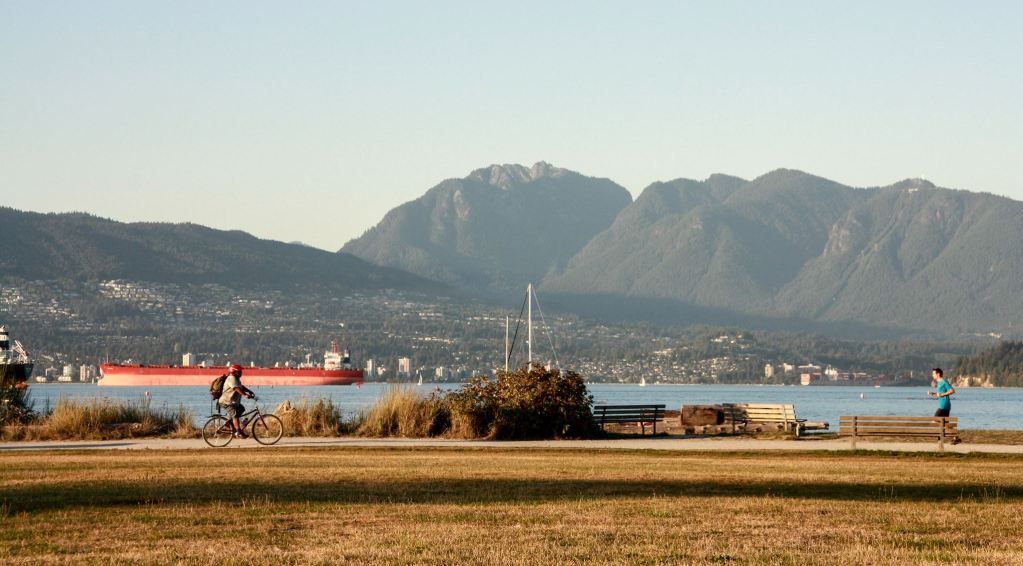 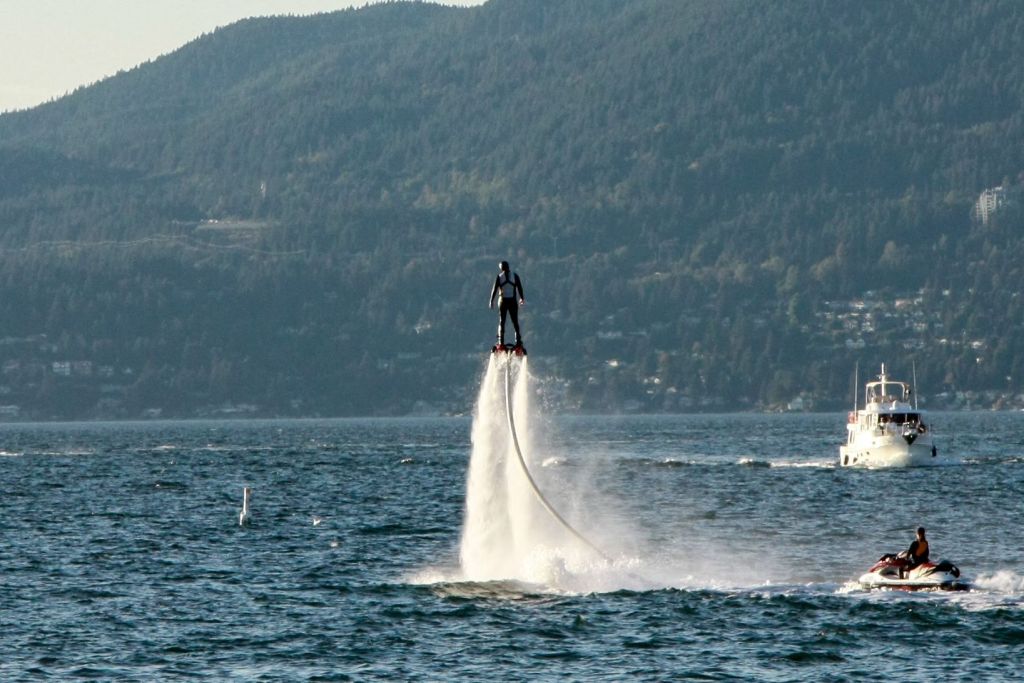 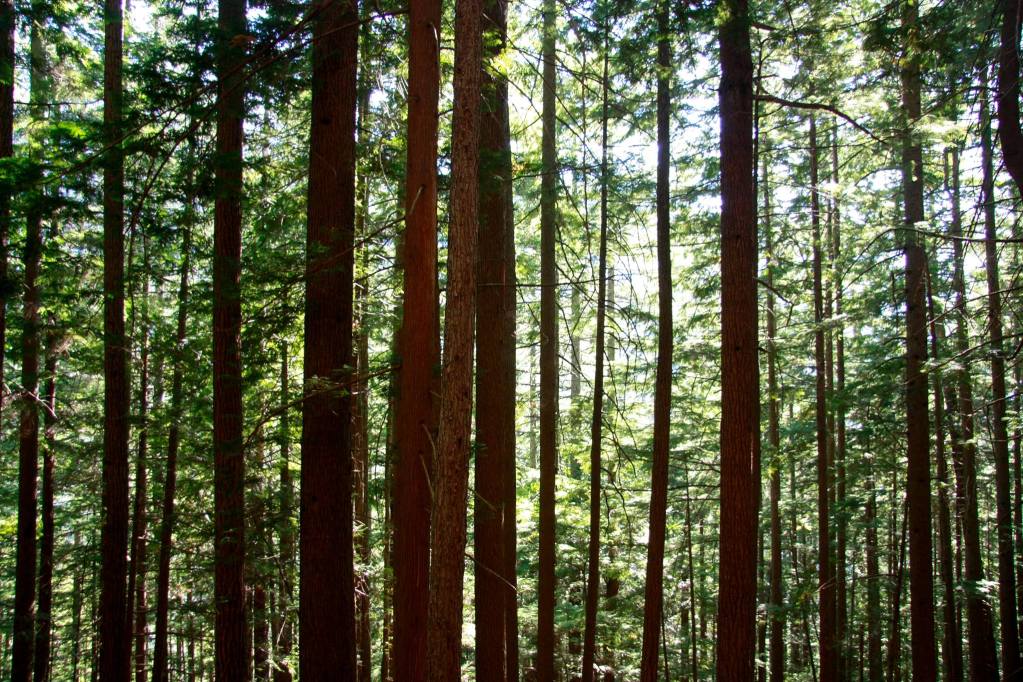 And if I ever want to feel tiny, I just go to Pacific Spirit Provincial Park next to my house, pick one of the myriad forest paths, and look up.  What city?

Okay, so this one always repeats, but I always pick a different section!  There’s the Canada Place/Stanley Park/English Bay ocean and seaplane-facing one that I always do, passing three beaches and Coal Harbour, but I too often neglect the Kits Beach/Granville Island/Science World portion facing the city.

I only found out I liked hiking when I did it for the first time in Argentina — and then I questioned why it took going so far to appreciate nature similar to that of home.

Quarry Rock at Deep Cove is nice but oh-so short, and the relentlessly uphill Grouse Grind is such a grind.  There’s so many to choose from, but the next logical famous hike to do is most definitely the Stawamus Chief up in Squamish.  An hour and a half of walking and grabbing chains and ladders through a beautiful forest later, you emerge at the top of a granite peak, surrounded by hungry chipmunks (eager for human snacks) and a jawdropping view of Howe Sound.  Just hope that infamous Vancouver rain doesn’t get in the way! 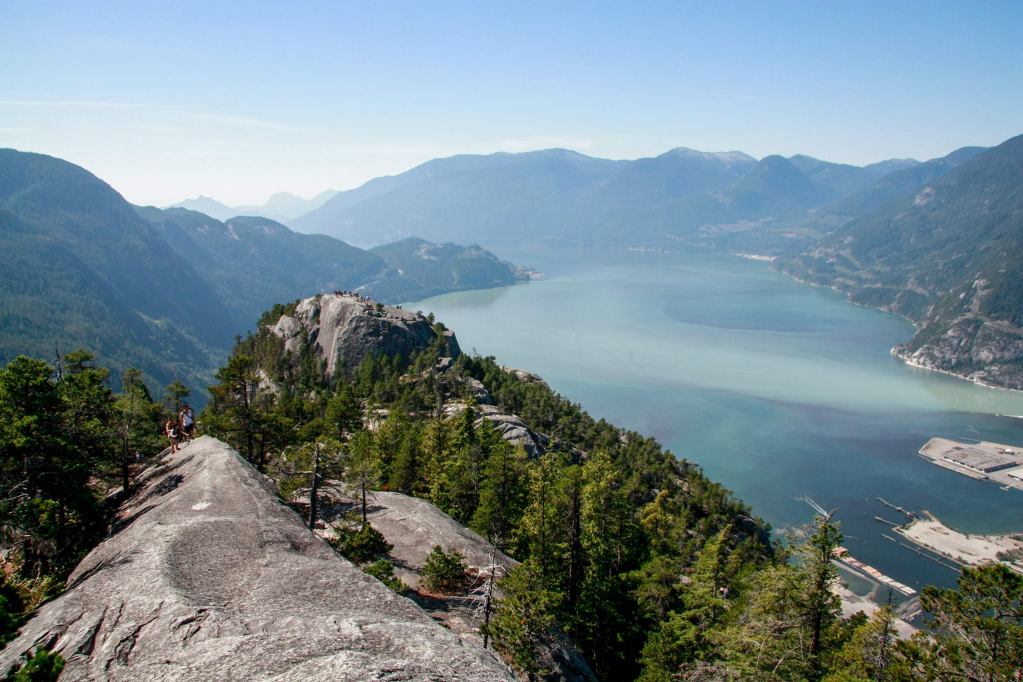 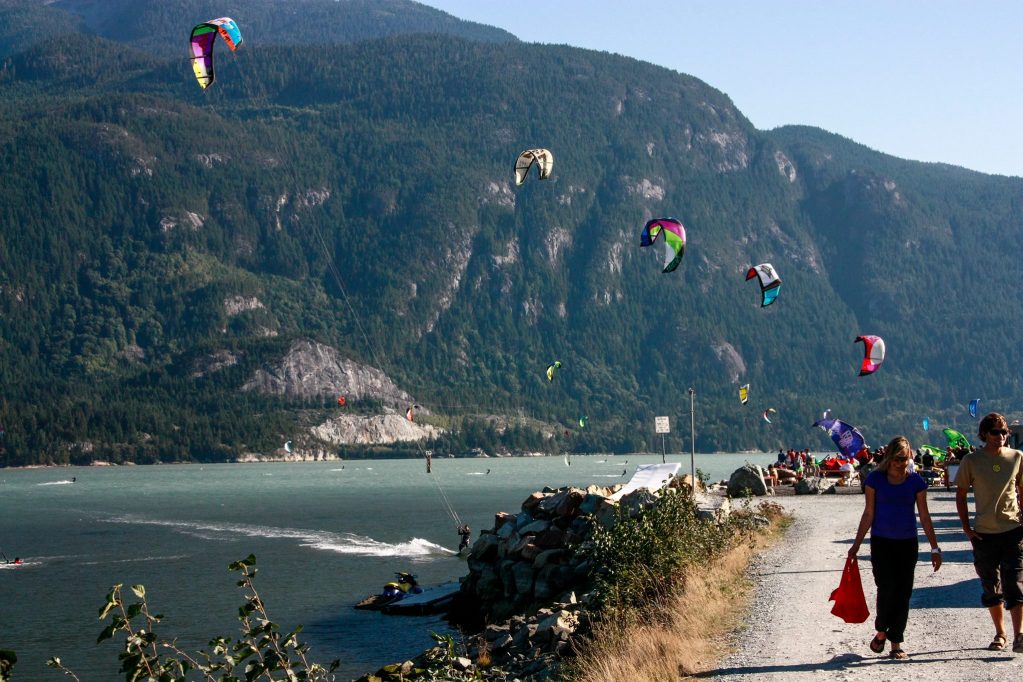 7/ Lament what I missed

This time, it’s the Garibaldi Lake hike.  Next time, it’ll probably be skiing (as I’ve said in the last 6 years, “next year”).  In the spring, it’ll be the cherry blossoms.  Next, it’ll be the Southern Gulf Islands, or an opportunity to go further afield to Vancouver Island (still holding out for a Tofino trip someday), or…

Point is, I miss home — and the friends and family whom I share it with.  Travel opportunities abound even at home, with the added bonus of good company.  Maybe I should be just be there more often…